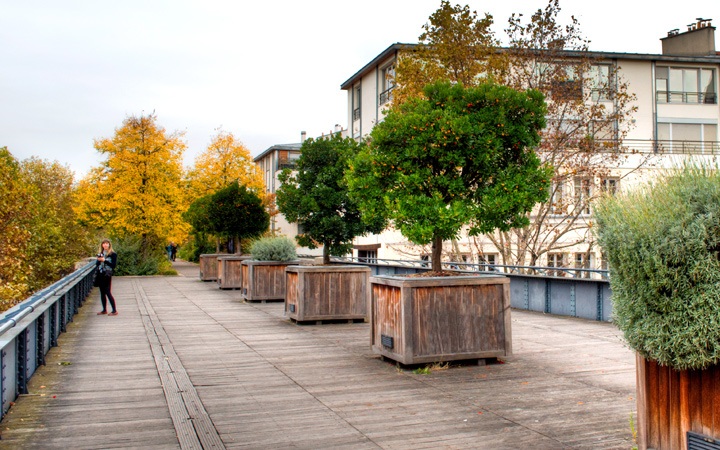 New York may have its High Line elevated park on a former railway line in Manhattan, but Paris got there first back in 1993 with the Promenade Plantée. Stretching for almost five kilometres across the 12th arrondissement, this narrow raised park follows the route of the old Vincennes railway line which closed down in 1969. Previously the line had linked the Place de la Bastille to eastern Paris for 100 years, but it was replaced by a new RER route so became redundant and was abandoned. Ten years on the area had turned into an eyesore, with overgrown tracks and crumbling viaducts and was scheduled for demolition. But it was saved and turned into an urban park known as the Promenade Plantée – or planted walkway – a secret garden above the city where you can walk or sit and relax among the trees. 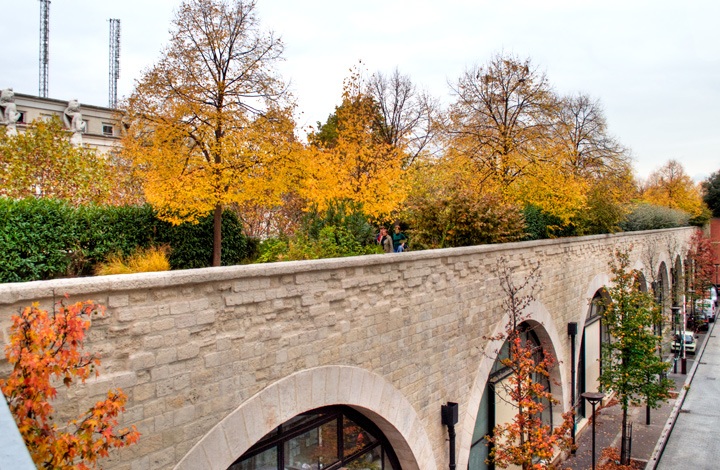 Walking along the Promenade Plantée

The Promenade Plantée starts just south of the Opéra Bastille, with steps leading up from Avenue Daumesnil above the Viaduc des Arts. Here the red-brick vaulted archways underneath the old railway tracks have been restored and renovated. The 64 arches now house shops and galleries celebrating the art and crafts of the area. These range from porcelain painting workshops and sculpture galleries to antique shops and artisans who create their own handmade musical instruments. You can watch some of the craftsmen at work, pick up some unique gifts, or just stop for a drink in one of the cafés. 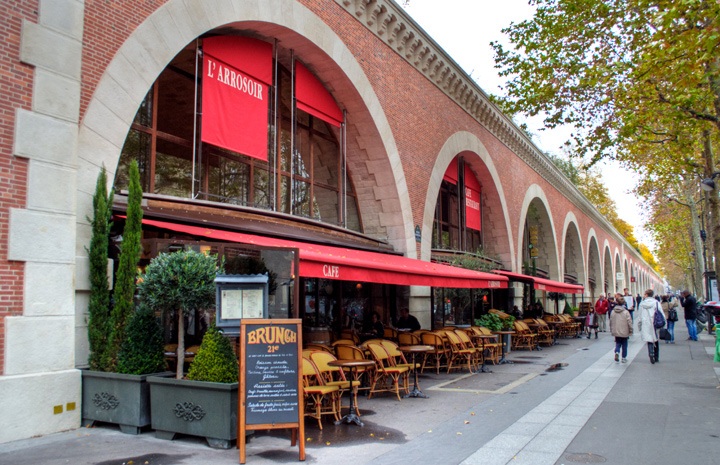 Shops and restaurants along the Viaduc des Arts

The first section of the Promenade Plantée runs above the viaduct for around 1.5 km and is lined with trees and plants – bamboo, roses, wisteria, cherry and maple trees – mixed in with archways, benches and narrow ponds. You get a different perspective on the city from above, looking down on passers by and up at the art deco detailing on some of the surrounding buildings. Though sometimes the trees block out the city entirely and you can almost forget where you are. At the end of the viaduct you pass through an apartment building and head down into the Jardin de Reuilly. This used to be an old freight station but now has a big lawned area for picnics, crossed by an arching metal and wood footbridge. There’s also a café, and it’s edged by walkways and terraces lined with sculptures. 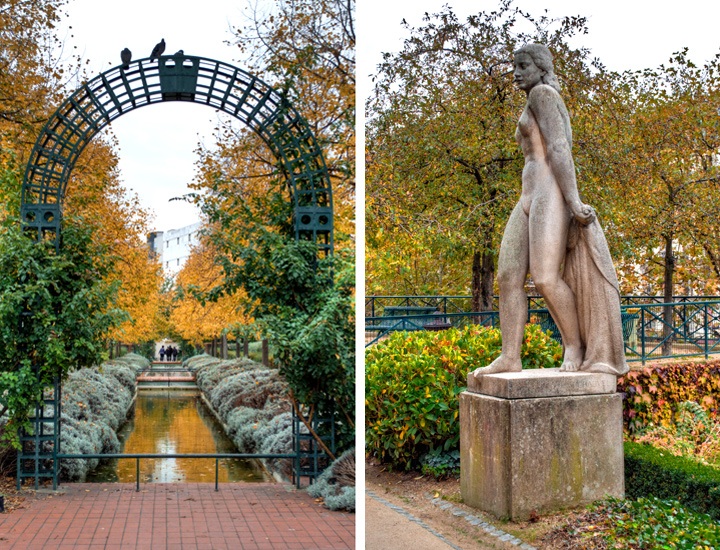 Arches and sculptures along the Promenade Plantée

The next part of the route runs through some modern buildings (we thought we were got lost here but keep straight on) until you pass under a railway tunnel and back into parkland. Here you’re below the level of the surrounding streets in a railway cutting, with a parallel cycle route running through a canopy of trees and ivy-covered tunnels. At the end of the route a metal spiral staircase leads up to Boulevard Carnot, where you can walk to the Bois de Vincennes – a huge park covering almost 1000-hectares of land in eastern Paris. 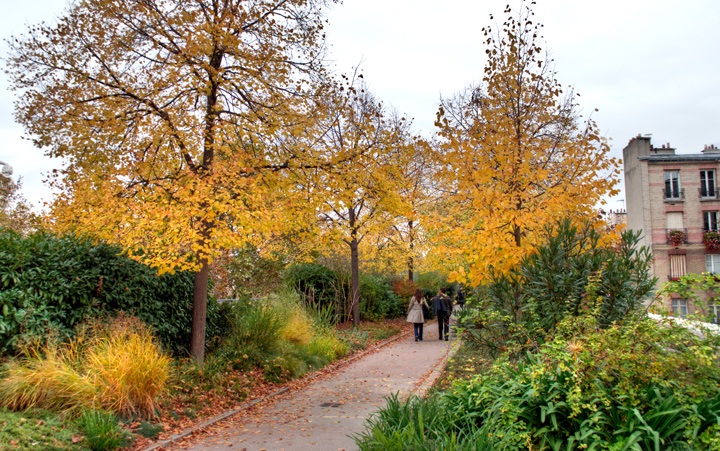 Autumn leaves on the Promenade Plantée

For years Paris’ Promenade Plantée was the only elevated parkway in the world but the idea has spread, not just to New York’s High Line but there are also plans for similar parks in Chicago and Philadelphia. But if you want to see the original or just want to escape the crowds and see a different side of Parisian life, then take a walk along the Promenade Plantée. 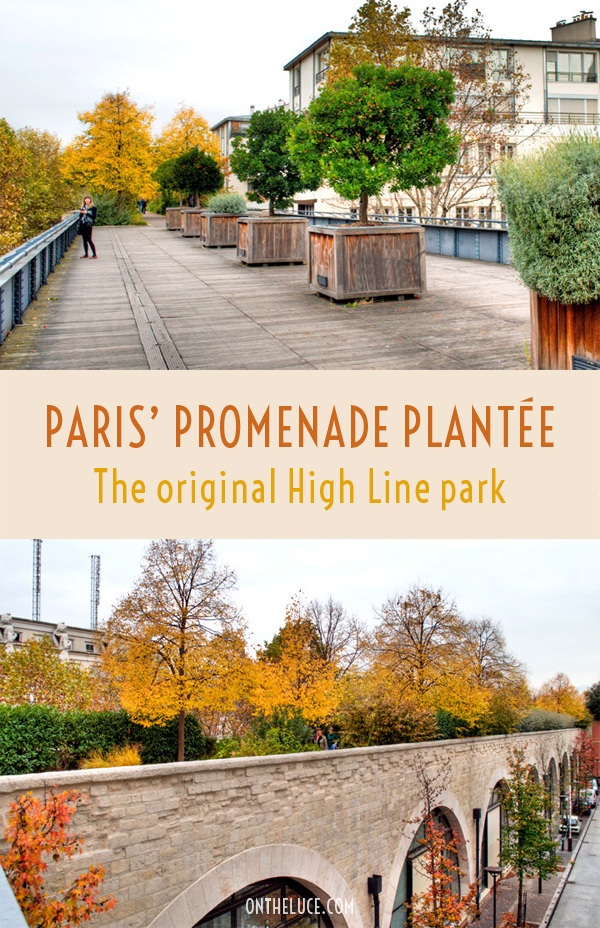