A taste of bubbly: Touring the Champagne vineyards 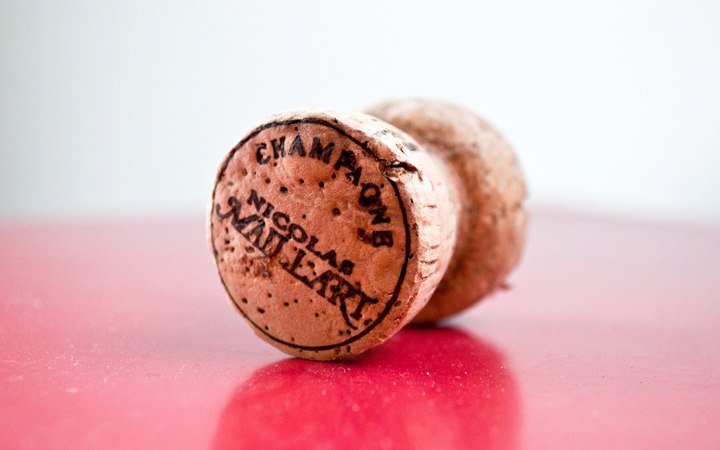 If you’re staying in Reims, it’s easy to visit a few of the big-name Champagne producers found around the outskirts, like Pommery or Taittinger. But if you want to discover some of the more unusual small producers and taste some Champagnes which you can’t get at home – or even some that you can’t buy anywhere else apart from at the cellar door – then you need to get out of the city and explore the Champagne region’s countryside. After not learning a great deal on the surreal Pommery tour, our group of five wanted to actually find out how Champagne is made, and with everyone wanting to be tasting rather than driving, we signed up for a half-day tour with local company Le Vigne du Roy. 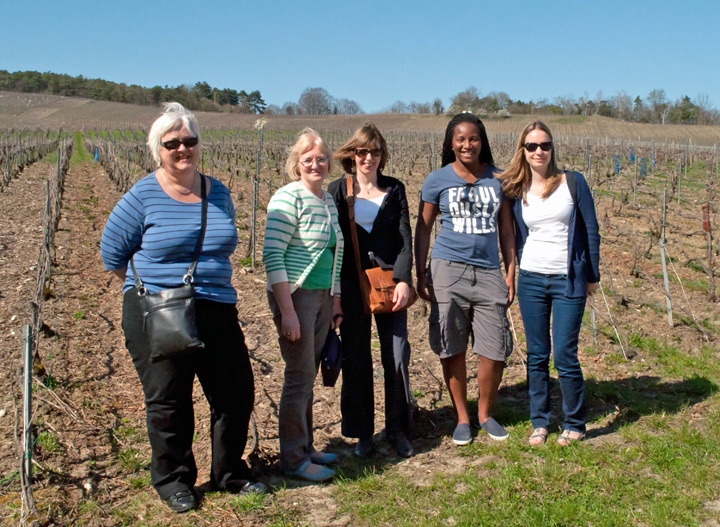 In the the Champagne vineyards outside of Reims

Our guide was Ekaterina, who originally came over from Russia as a grape-picker for the Champagne harvest and ended up staying, working as a tour guide at Mumm before running her own tours. She picked us up in a minibus from Reims and we headed along winding roads out into the countryside. Almost every other building in the villages we passed was a Champagne house, varying from modern industrial-style complexes to old châteaux. Our first stop was out among the vines – recently pruned and looking pretty sparse at this time of year – where we heard about all the work that goes into nurturing these scruffy looking plants into producing the best-quality grapes, with everything done by hand. Looking out at the acres of land around us even the idea was exhausting, and enough to build up a thirst. 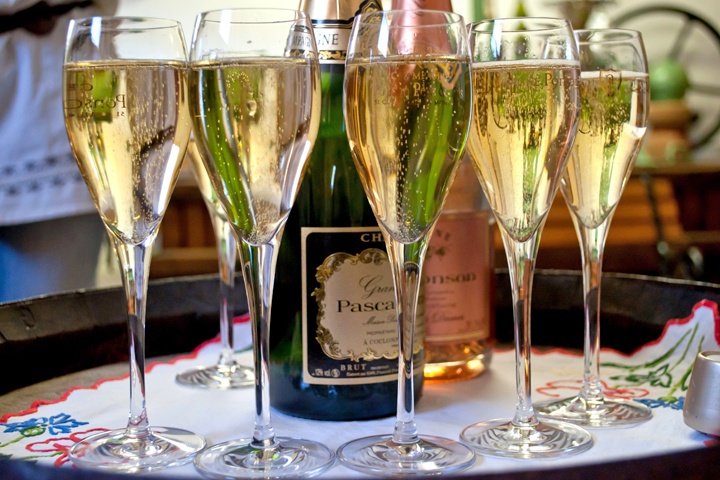 Glasses lined up for tasting at Pascal Ponson Champagne house

Our first Champagne house was Pascal Ponson, a small-scale family producer who don’t sell their Champagne anywhere other than straight from their cellars. And it’s worth the visit, as their Grande Réserve was fantastic and a real bargain at €15 a bottle, so a few were squashed into the suitcase before the trip home. First though we were taken around their press house, fermenting room and cellars, as well as the oddly named riddling house (where bottles are tilted to collect the sediment in the neck before it’s removed). 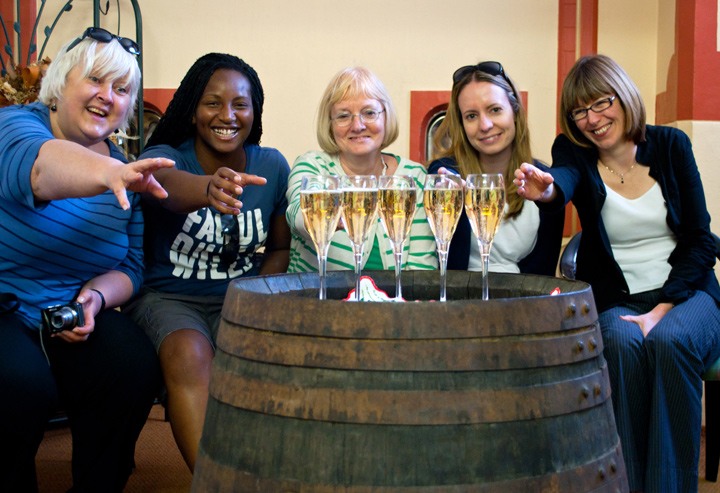 The next visit was to Nicolas Maillot, a more modern Champagne house full of stainless steel and high-tech equipment, where we got to watch the sediment being frozen and popped out of the bottle before it’s finally corked. And after trying three of their wines and grilling Ekaterina about anything and everything to do with Champagne, our happy (and slightly sleepy) group headed back to Reims, much better informed, full of Champagne and with bags of bottles clanking. 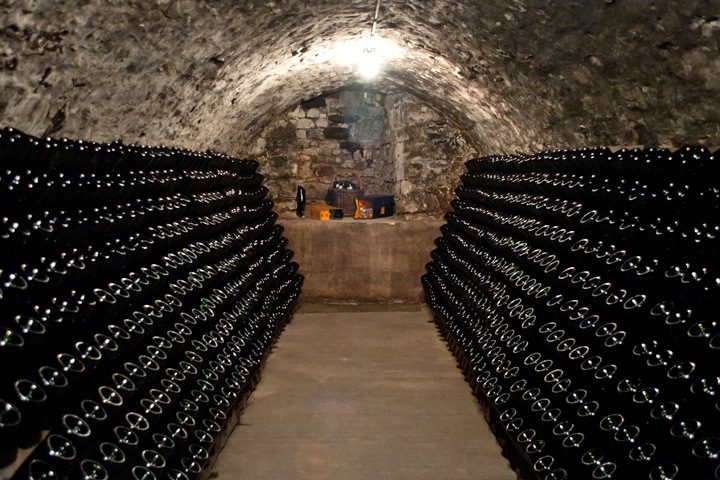 In the cellars at Nicolas Maillot

Le Vigne du Roy offer tours and tastings around the Champagne vineyards which range from a half-day to multiple days. Our half-day private tour cost €250 for a minimum of two people, plus €30 per extra person (so for a group of five like ours it works out as €68 each). 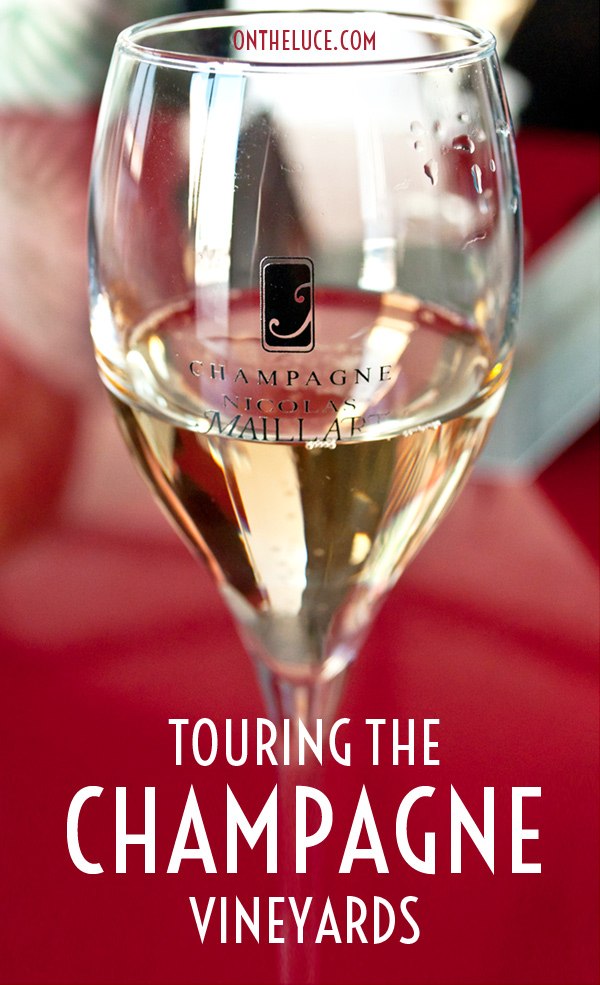