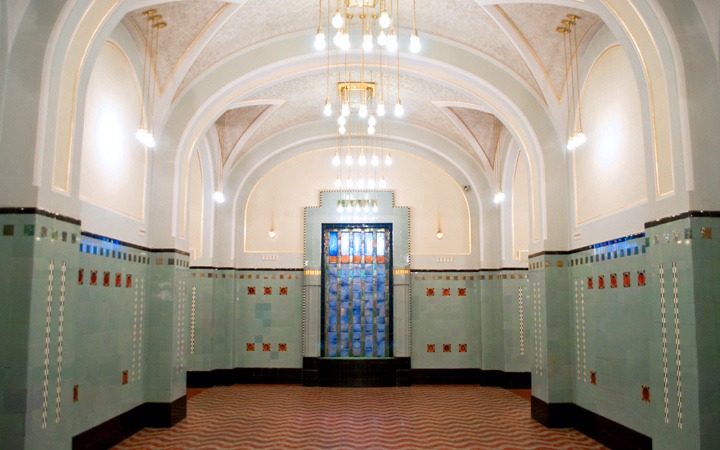 Art Deco and Art Nouveau are probably my favourite architectural styles, with their classic, elegant, simple designs. But I never expected the Czech Republic to have one of the most spectacular Art Nouveau buildings I’ve ever seen. As we were heading out to explore Prague, the weather suddenly turned and first place we spotted to shelter from the showers was an imposing domed-roof building near our hotel. It turned out to be the Municipal House – or Obecní dům in Czech – built as a concert hall and cultural centre for exhibitions and balls, and site of some of the country’s most impressive Art Nouveau design. 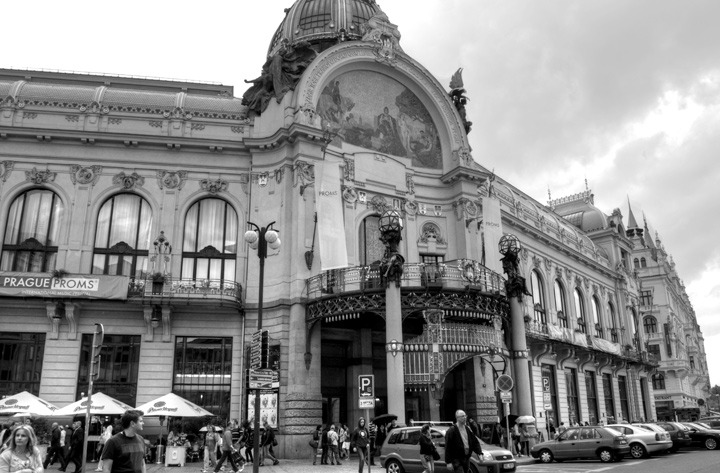 Outside the Municipal House

The Municipal House opened in 1912, though the process of building it started over ten years earlier. The local council ran an architectural competition to design a building for the site, which used to be a Royal Court. But even after two rounds they couldn’t decide on which design to go with, so ended up just giving the job to architects Osvald Polívka and Antonín Balšánek. They took inspiration from the Art Nouveau movement and incorporated designs by around 30 leading Czech artists of the time – from mosaics and stained glass to statues and murals. 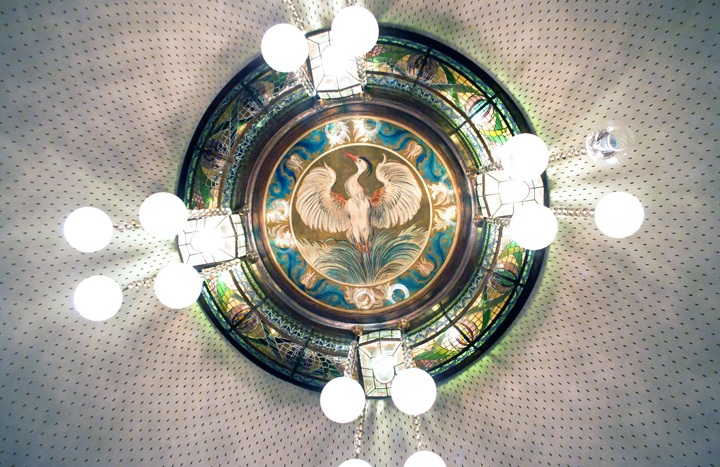 Beautiful light fitting on the ceiling of the American Bar

Even as you stand in the entrance hall you can see Art Nouveau design touches all around you – from the door handles to the font used in the signs – but unless you’ve got a ticket for a concert here, a velvet rope across the staircase keeps you down in the lower floors. Not that they’re not worth seeing though. As you go underground the corridors are decorated with mosaics and painted tiles, and there are some stunning ceiling lights. In the basement is the American Bar, apparently the city’s oldest bar. We hid out there with a beer, but as we ventured back up to see if the rain had stopped, I spotted a sign for guided tours of the building and knew we had to come back to see more of it. 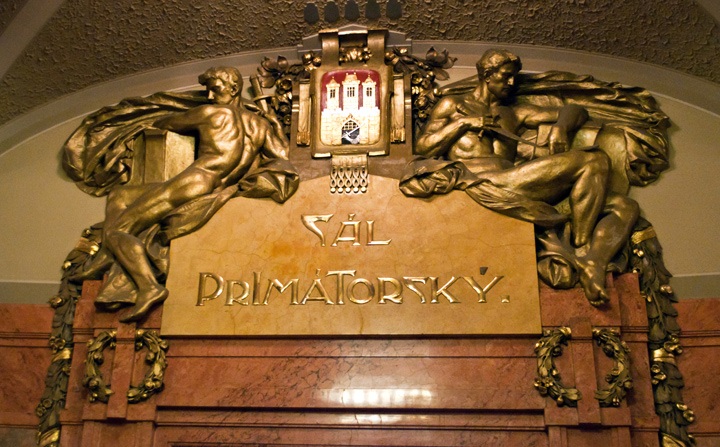 Decoration above the doors on the first floor

The tours run a few times a day and take you through the rooms on the first floor, including the smaller concert halls and assembly rooms that you can’t get into if you’re watching a concert. After gathering in the entrance foyer, our guide started by taking us beyond that velvet rope and up the pink marble staircase to the Municipal House’s main concert hall – the Smetana Hall. Underneath a huge glass domed ceiling, the hall is decorated with carved white stone and gold, with statues and painted frescoes around the walls. This is  concert hall is Prague’s largest and seats 1200 people. It’s home to the Czech National Symphony Orchestra and concerts run here most days – you can often pick up last-minute tickets. 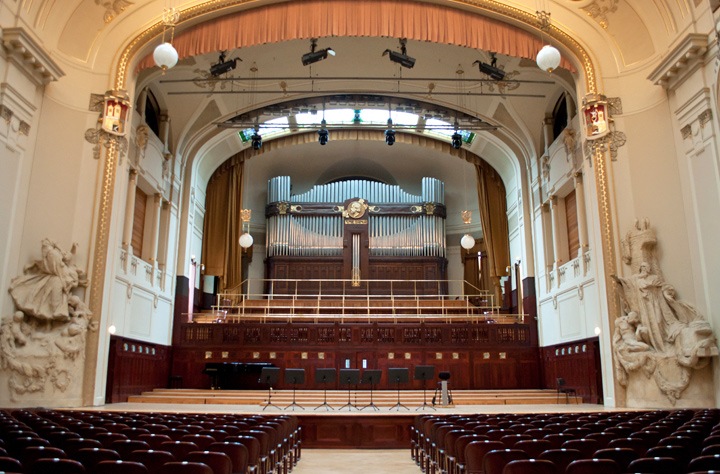 Inside the Smetana Hall

From there we went through different rooms, from the gold-covered Confectionery to rooms designed to showcase the styles of different regions and countries, like the Oriental and Moravian Parlours. Our guide pointed which of the original features – like the chandeliers in one room – are still in place, but a lot were damaged or stolen during the communist period. In the 1990s a huge restoration project took place when everything was painstakingly restored and recreated using photographs of the original designs. The restoration took about four years and cost over ten times more than it did to originally build. 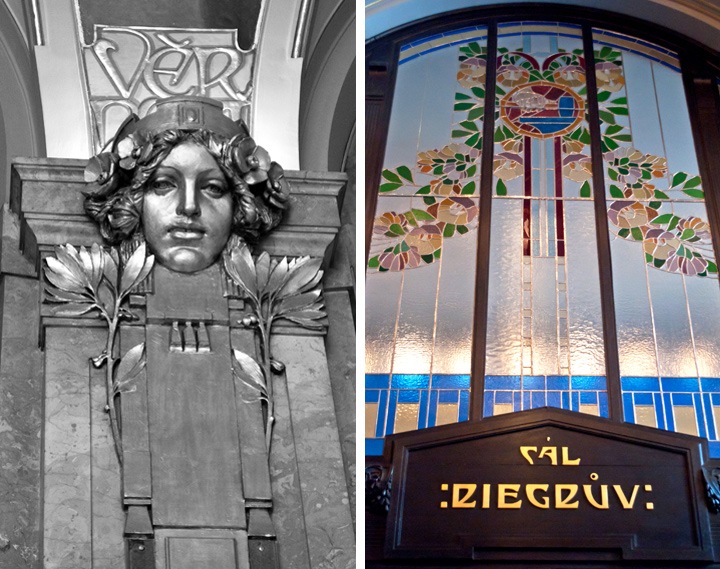 One of the highlights of the tour is the Lord Mayor’s Hall (or Primatorský sál). Everything in this octagonal room was designed by Czech painter Alphonse Mucha, famous for his Art Nouveau posters and illustrations. There are some amazing details like the silver light sconces carved with women’s faces and and huge stained glass windows looking out over the street below, along with eight different painted panels around the walls of characters from Czech history and mythology representing different virtues. 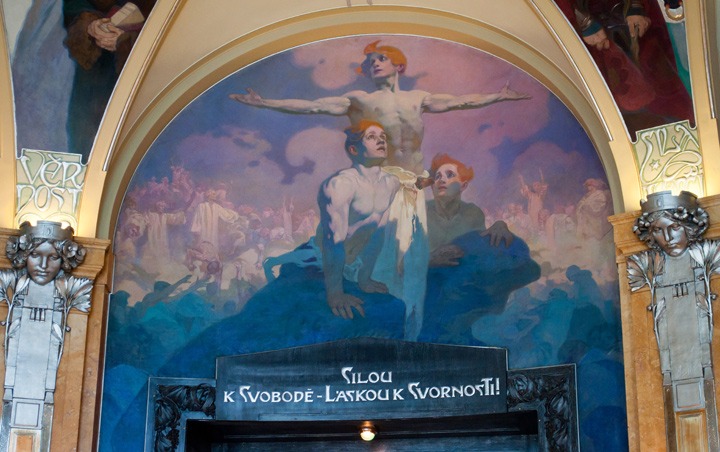 After a few other small concert halls and salons and a few hundreds of photos of the Art Nouveau details – from the painted ceilings, stained glass panels and carved statues to the ornate silver grills on the air conditioning units. Then it was back down the stairs to the basement and the American Bar for a another drink before we emerged back into daylight and returned back to the twenty-first century. 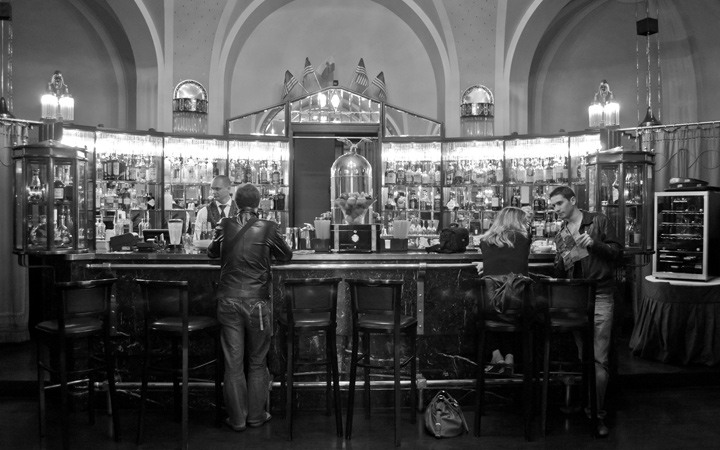 Drinks in the American Bar

Tours around Municipal House usually run two to four times a day, lasting about 90 minutes and costing CZK 290 (about £9) for adults or CZK 240 for children 10–18 or over 60s, plus an extra CZK 50 if you want to take photos. The tour includes a drink afterwards in the American Bar. Or if you don’t have time for the tour, you can still have a drink in the bar or lunch in one of Municipal House’s cafés and restaurants (we didn’t get chance to try them out but see a review of Pilsen restaurant from Shipscooksstuff). 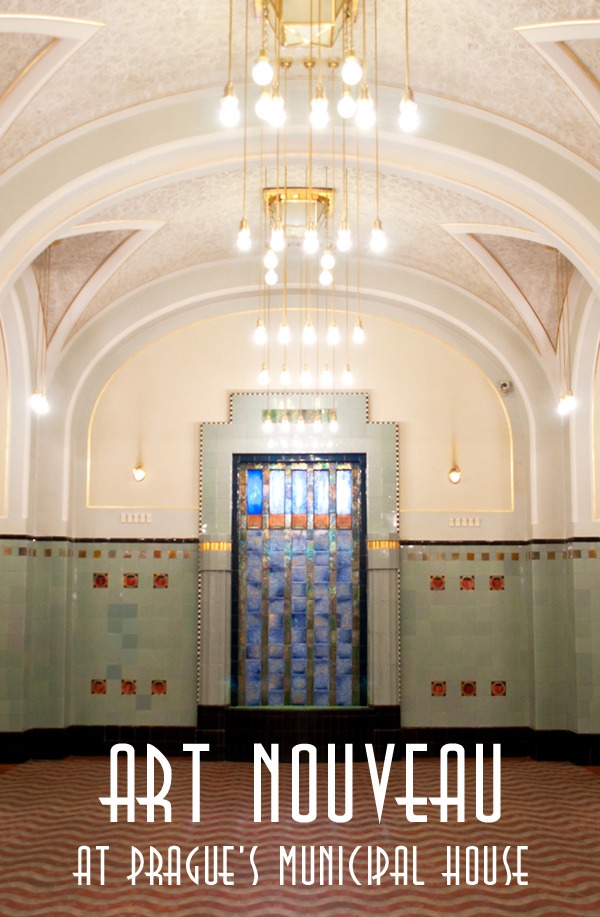 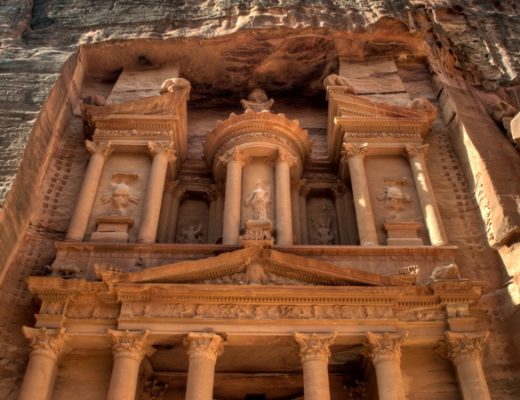 Exploring Petra: Following the Siq to the Treasury 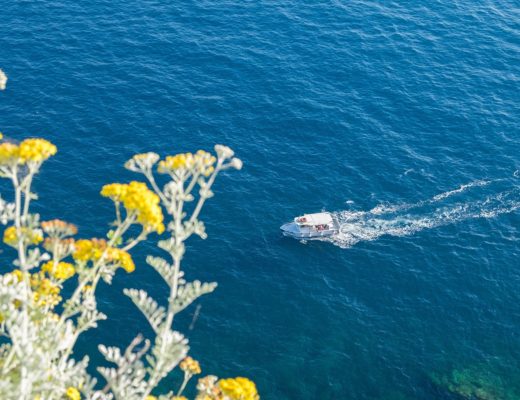 Visiting Corniglia: The quiet heart of the Cinque Terre, Italy 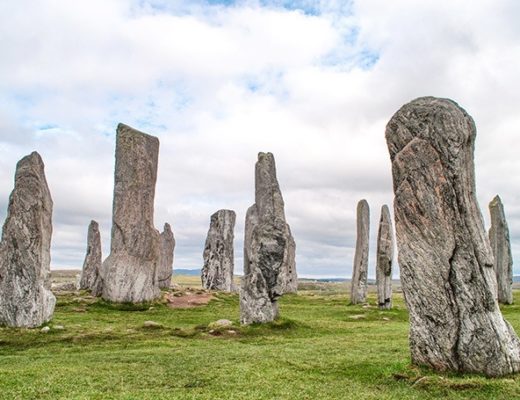 A journey through history on the Isle of Lewis, Outer Hebrides