Exploring Petra: Beyond the Treasury 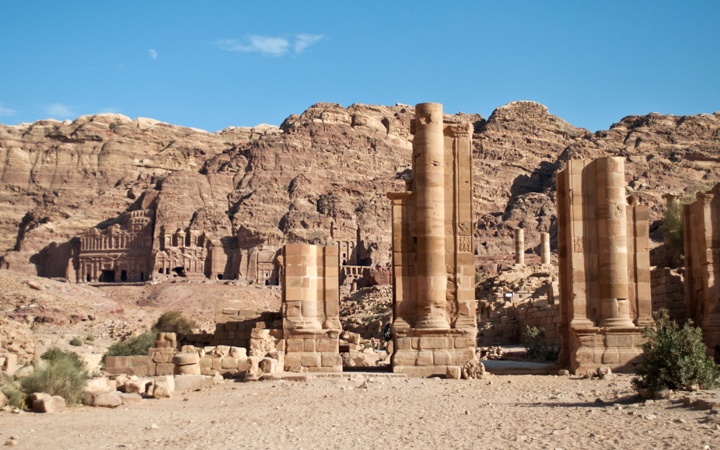 When you think of Petra, the first thing that probably comes to mind is the Treasury and the famous walk through the narrow corridor of the Siq to get there. But that’s only a tiny fraction of Petra’s huge 60 square kilometre area, and there are so many more caves, temples, mountains and pathways to explore beyond there. You could spent weeks hiking all the tracks around Petra, but for our first day we stuck to the main path along some of the most accessible and spectacular sights in the heart of the old city. 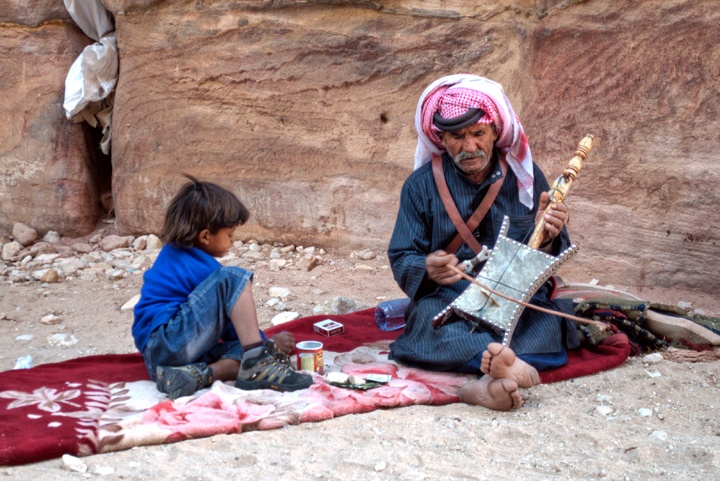 Beyond the Treasury you come to the area called the Outer Siq. Bustling with people, we dodged past stallholders selling jewellery, people offering camel and donkey rides, and overwhelmed looking visitors trying to take it all in. Off to one side an old man sat playing a weird-looking one-stringed musical instrument. We found out later it was called the rebab, or the Arabian fiddle, and is one of the oldest instruments in the Arabian world. The strings are made of horse hair and even with only one string, the man used the bow to bring out a range of notes to make a melancholy, haunting sound. 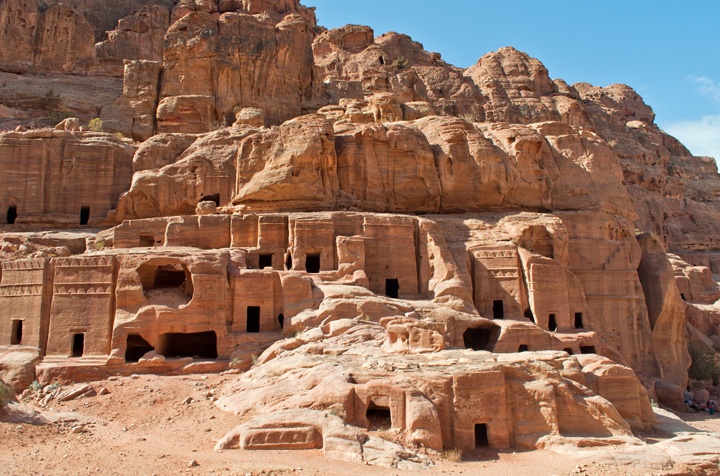 The Street of Facades

While most people hurried on to the next big sight, the Theatre, we stopped to explore the Street of Facades. Around 40 tombs cover the hillside here – from huge ornate structures built for rich merchants down to small caves stacked on top of each other for everyone else. Some are really well preserved but others have been worn smooth by the wind and rain. We clambered up into one of the caves to take a better look at the rock. It’s a mixture of golden and pink stone with ripples of white that almost look like fish scales. The range of colours come from the iron oxide in the rock and give Petra its ‘rose red city’ title. 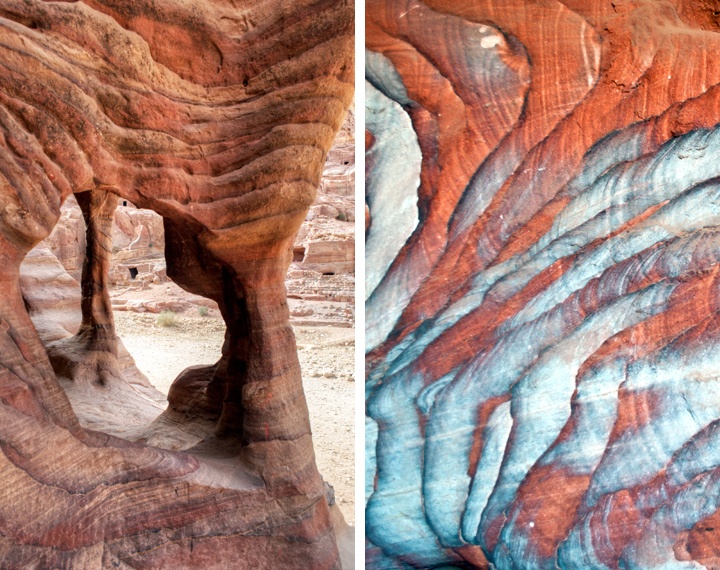 Inside one of the caves and details in the rock

Next along the path we passed by the Theatre. Although it looks Roman, it was originally built by the Nabateans around 200 years ago. It was cut out from a huge slab of rock and seated over 3000 people when it was built. There was an orchestra area and a three-storey stage at the time, but no-one knows what sort of performances were put on here. When the Romans took over Petra they added another tier to the top to more than double the capacity. But a lot of the building was destroyed by earthquakes and the stone was looted over the years, so you can only admire it from a distance now. 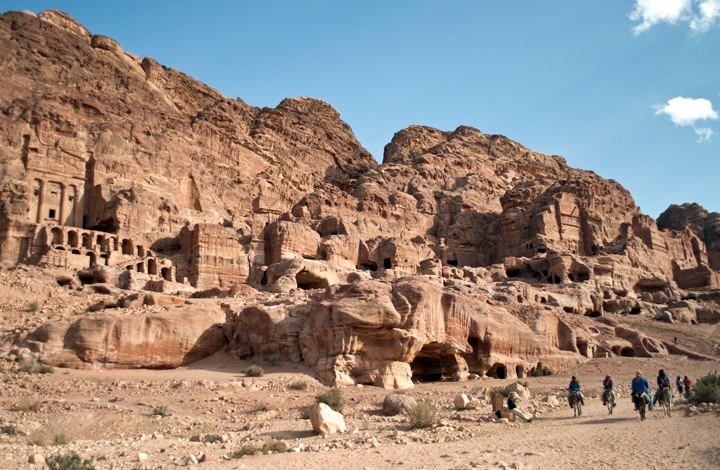 Downhill from the Theatre the path widens, and overlooking it are the Royal Tombs. They were built for  Nabatean royalty and politicians and are some of the biggest and most impressive tombs in Petra. The Royal Tombs are made up of four different tombs – Urn Tomb, Silk Tomb, Corinthian Tomb and Palace Tomb. The biggest is the Urn Tomb, and we climbed up steps cut into the rock face, up onto the hillside to take a look inside. The tomb itself is just an empty cave after it was gutted to be turned into a church by the Byzantines. But up close that huge frontage towers impressively over you, and looking out from the terrace there are panoramic views across the rest of Petra’s old city. 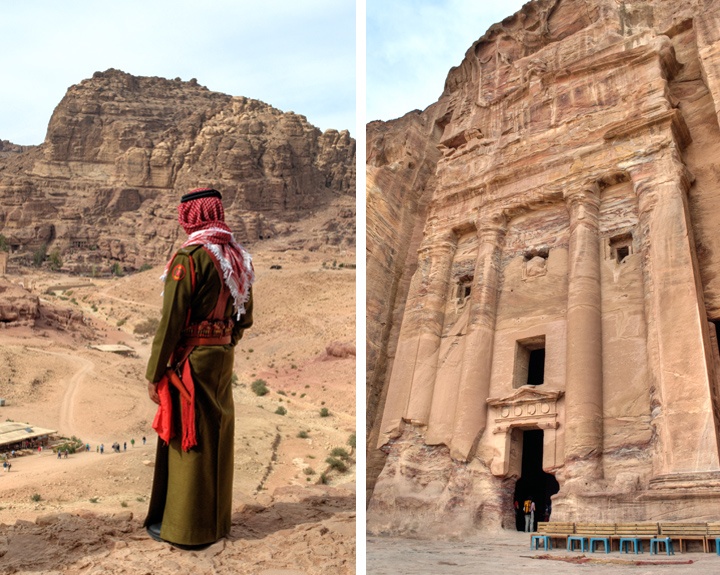 The towering Urn Tomb up close, and its view across Petra

From the Royal Tombs, a paved Roman road leads through the Colonnaded Street to Petra’s city centre. This part of the site has been badly damaged by floods, so you have to imagine how grand it’d have looked with a full row of columns. Part of the triumphal arch is still standing and was guarded by a couple of ‘Roman’ soldiers, defending the city from over-zealous camel riders rather than invaders these days. 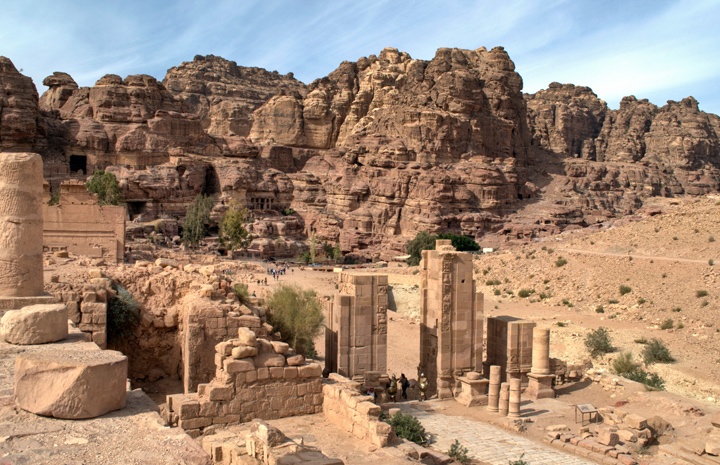 Looking out over the triumphal arch into Petra’s city centre

Beyond here is the centre of old Petra, home to ruined churches and temples like the Qasr al-Bint, and the old Nabatean baths. You also see a network of paths and tracks, leading off up towards the tombs or into the hills, just calling out to be explored. It’s easy to get sidetracked in Petra and to walk just a bit farther or go into just one more tomb. But with an hour’s walk back to the entrance and the rocks just starting to glow as the sun went down, the rest was going to have to wait. 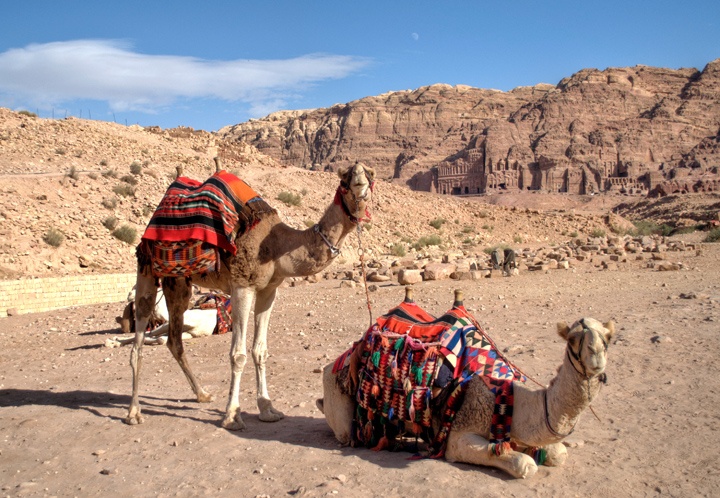 Camels waiting to transport weary travellers back to the Treasury 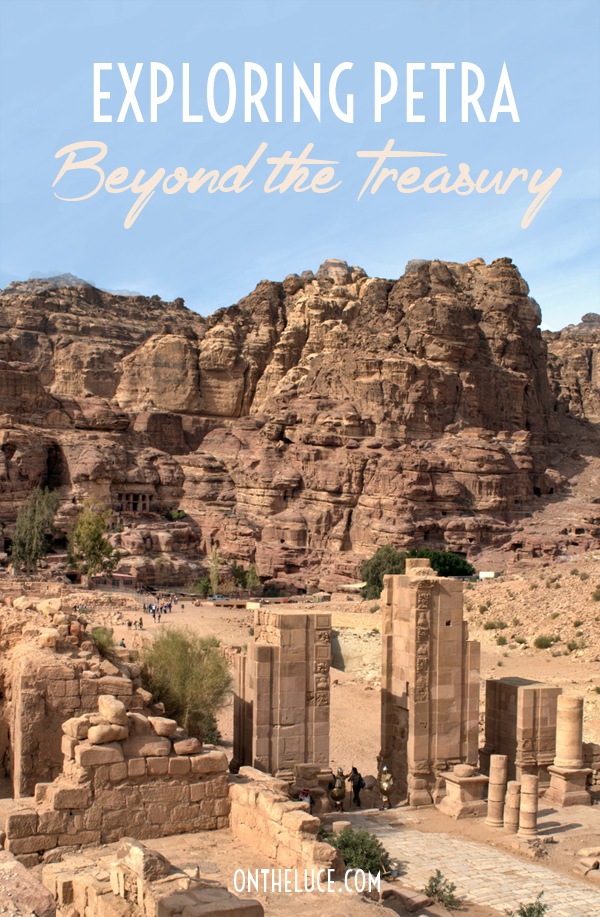