Just a drop: A port wine tasting in Porto 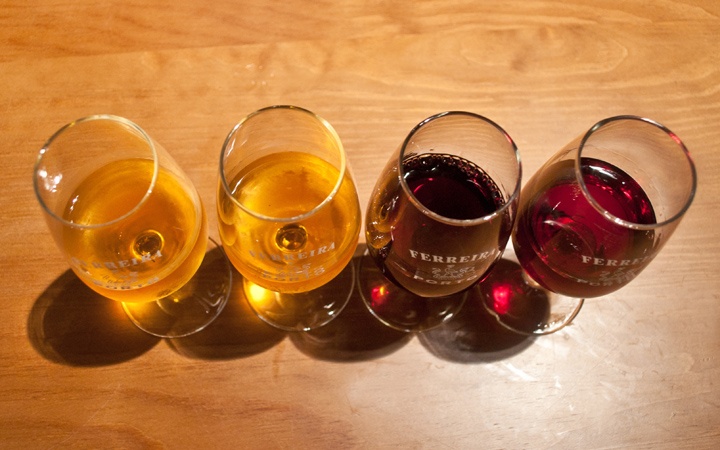 It’s in both the name of the country and the city – there’s no escaping port on a trip to Porto. I’m a huge wine lover and have tasted my way around wine regions across the world, but for some reason port has never really been on my wine radar. I’ve tended to lump it together with other fortified wines like Madeira, Marsala and sherry, dismissing them as something old-fashioned. In the UK you’d traditionally think of your gran drinking a sweet sherry and upper-class gents having a port and a cigar after dinner. But times are changing, with fortified wines being used in fashionable cocktails and new varieties being developed to appeal to more people. So when I visited Porto I had to investigate for myself. 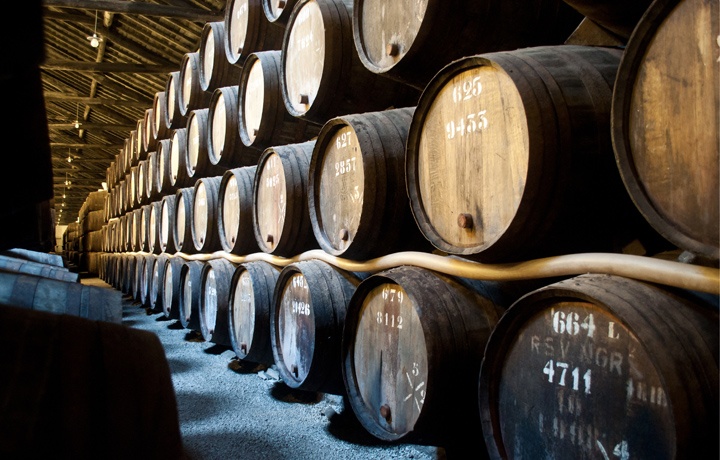 Stacks of port barrels at Taylor’s

Porto is home to over 40 port producers – well almost, they’re actually based across the River Douro in Vila Nova de Gaia. The hillside is covered with red-roofed buildings topped with famous names like Graham’s, Taylor’s, Cockburn’s and Croft. But the port isn’t actually made here. Production starts 50 miles upstream in the Duoro Valley, where the climate is perfect for growing the grapes used to make port. Like Champagne, port can only be produced in a specified area. Once the grapes are picked, pressed and fermented, the port is transported to Porto for storage and shipping around the world. Traditionally it was sent downriver in the rabelo wooden barges you see on the Duoro, but it now travels less romantically by road. 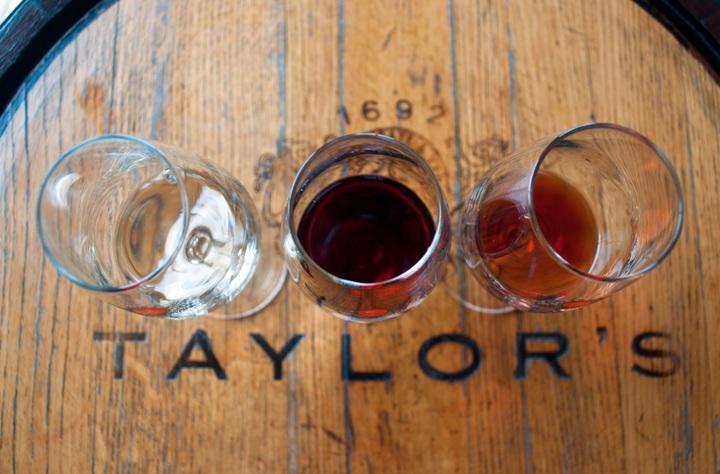 Many port lodges run tours, where you can try their different ports and learn about how they’re made. Some are free and others cost a few euros and include tastings. We had a tip-off that Taylor’s did a good tour, so headed there first… or at least tried to. After crossing the Dom Luis I bridge we headed for the Taylor’s sign. It only looked a few hundred metres away but half an hour worth of climbing up and down through winding streets we finally found it, just in time for the next tour. Our guide took us thorough the cellars and explained how port is made. It starts off like normal wine, but brandy is added during fermentation which stops all the sugar in the grapes being turned to alcohol, making it sweeter and more alcoholic. Different types are produced and aged in slightly different ways, giving a variety of colours, flavours and sweetness levels. 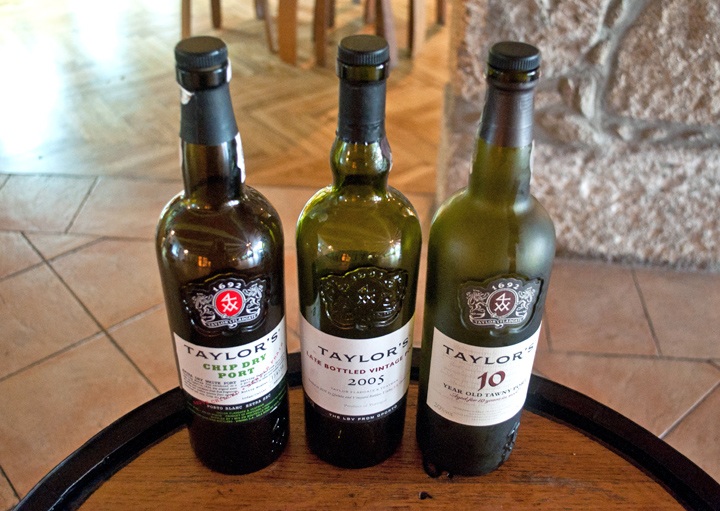 Theory done, it was on the tasting. We had three ports to try, starting with a white port, which I’d never tried before. Traditionally you think of port as dark red, but 90 different grapes can be used to make it, including white ones. White port can be sweet or dry, and this was their refreshing and crisp ‘Chip Dry’. You can drink it as an aperitif or mixed in a port and tonic – much tastier than it sounds. Next was a deep red ruby port. These are only aged for a few years so keep their bright colour and fruit flavours. And finally we had the tawny port, aged for longer in wooden casks so contact with wood and air give them a lighter, browner colour and more mellow flavours. Then there are the vintage ports, made with the best grapes from a single good year and aged for decades, which sell for hundreds of pounds (sadly not part of the tasting). 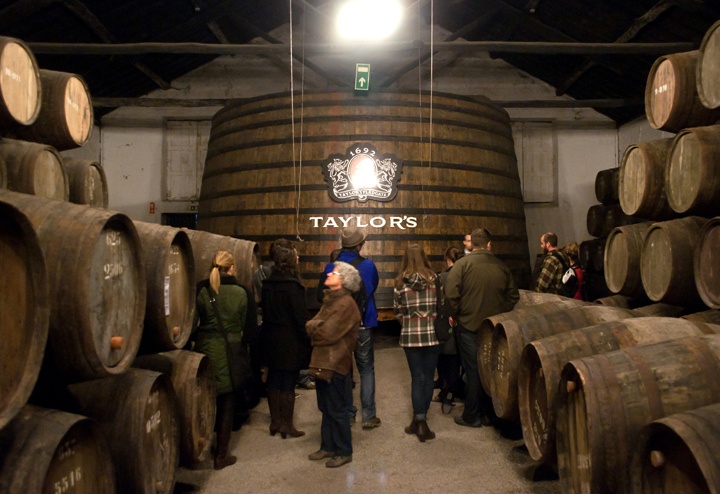 Touring the cellars at Taylor’s

So am I a port convert? Definitely. I enjoyed them all but the tawny was probably my favourite. It tasted like dried fruit and caramel, almost like a pudding in a glass. From Taylor’s we went on to Ferreira, down the hillside near the banks of the river. The next tour here was in Spanish so we gave it a miss and went straight to the tasting room. Expecting the samples to be a few centimetres deep, we ordered a dry white, sweet white, ruby and tawny, for €1,50 each. We ended up with four almost half-full glasses of port and which took the rest of the afternoon worth of tasting and chatting to work our way through (at 20% ABV you have to remind yourself not to drink it like wine). Nearby along the riverside a convenient cable car took us back up the hill to the Dom Luis Bridge to save us from too much post-port exertion. 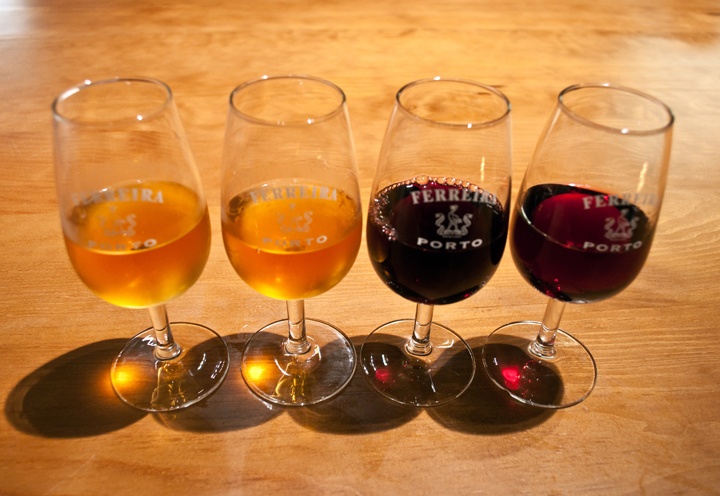 Generous-sized tasting samples for €1,50 at Ferreira

But I had one question left: why do so many port companies have English names? Apparently it dates back to the 17th century when England and France had a trade war. French wine was banned and the English started getting their wine from Portugal instead. Brandy was added to the barrels before shipping it to England to stop it going off and people loved the sweet, strong taste. So English wine merchants set up port companies in the Duoro and Porto to make more, many of which are still run by the same families today.

You can get a full list of Porto’s port cellars on the Association of Port Wine Companies website. Prices for tours and tastings vary: Taylor’s is €7 (with three port samples) and Ferreira is €6 (with two samples). 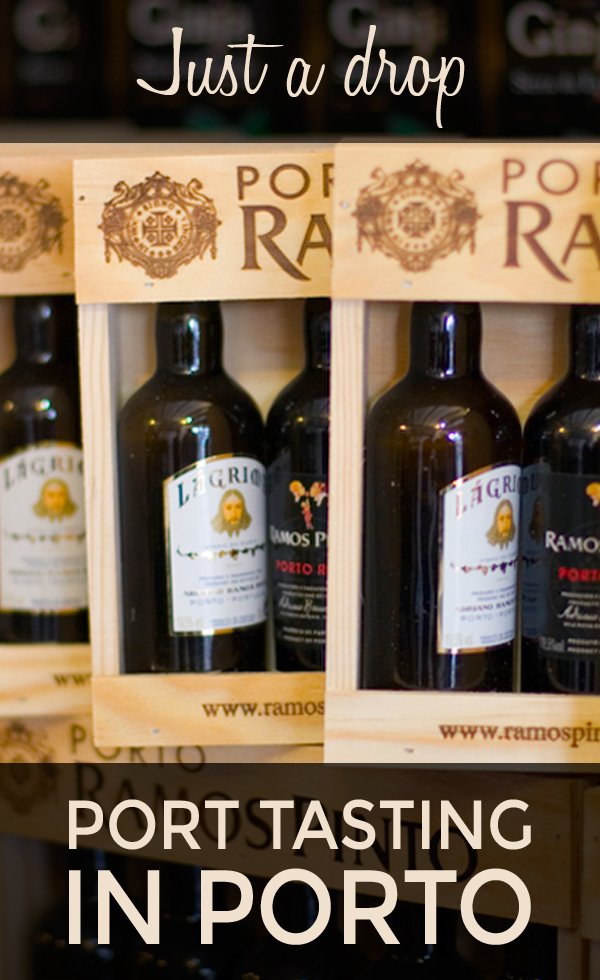