Penguins waddling along the beach, primary-coloured beach huts, rocky mountains and expanses of blue ocean – Cape Town has to have one of the best natural settings around. There’s a lot to see in the city itself, but if you’ve got a day to spare then the Cape Peninsula makes for a perfect one-day road trip full of penguins, peaks and panoramas. A lot of companies run day trips from Cape Town, but it’s also easy to drive yourself and means you can take things at your own pace and stop off where you like. Our driving route took us on a 85-mile loop around the peninsula, taking most of a day when you factor in stops. So pack your camera, your sunscreen and your coat (those Cape winds can be brutal!) and hit the road. 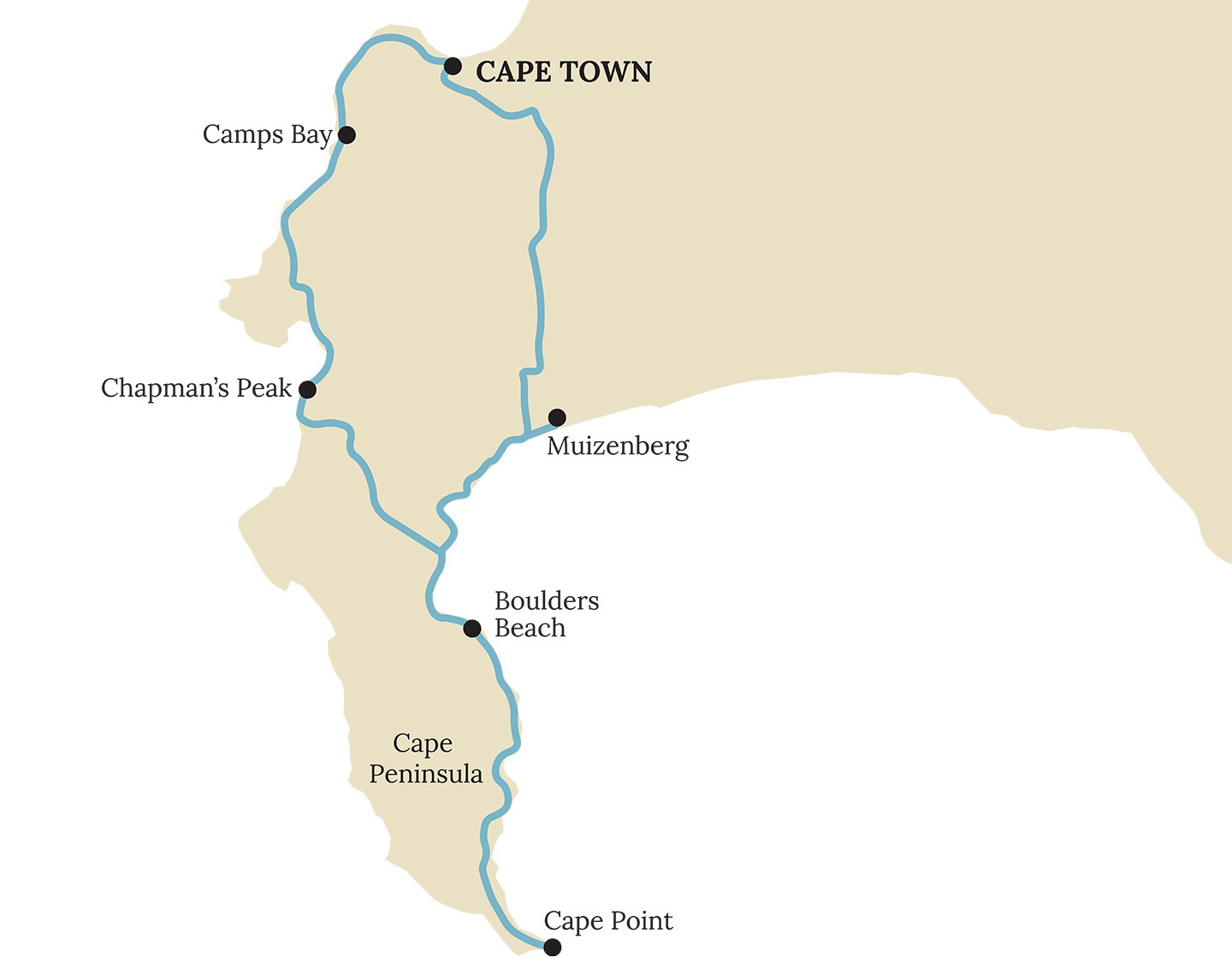 Our first stop was Muizenberg, 16 miles (35 minutes) south of Cape Town on the shores of False Bay. This laid-back beach suburb was one of South Africa’s most fashionable seaside resorts in the early 20th century. But it fell out of favour and into disrepair until recently being regenerated. Now you’ll find cool cafés, quirky shops and street art behind a 12-mile stretch of white-sand beach. It’s one of the best places to learn to surf with warm (by Cape standards), shallow waters. But it was its row of irresistibly Instagrammable colourful Victorian beach huts that drew me in. With the wind blowing an icy gale the beach was almost deserted, but the blue skies were perfect for photos. And on a calm day you can swim, surf or picnic on the beach. 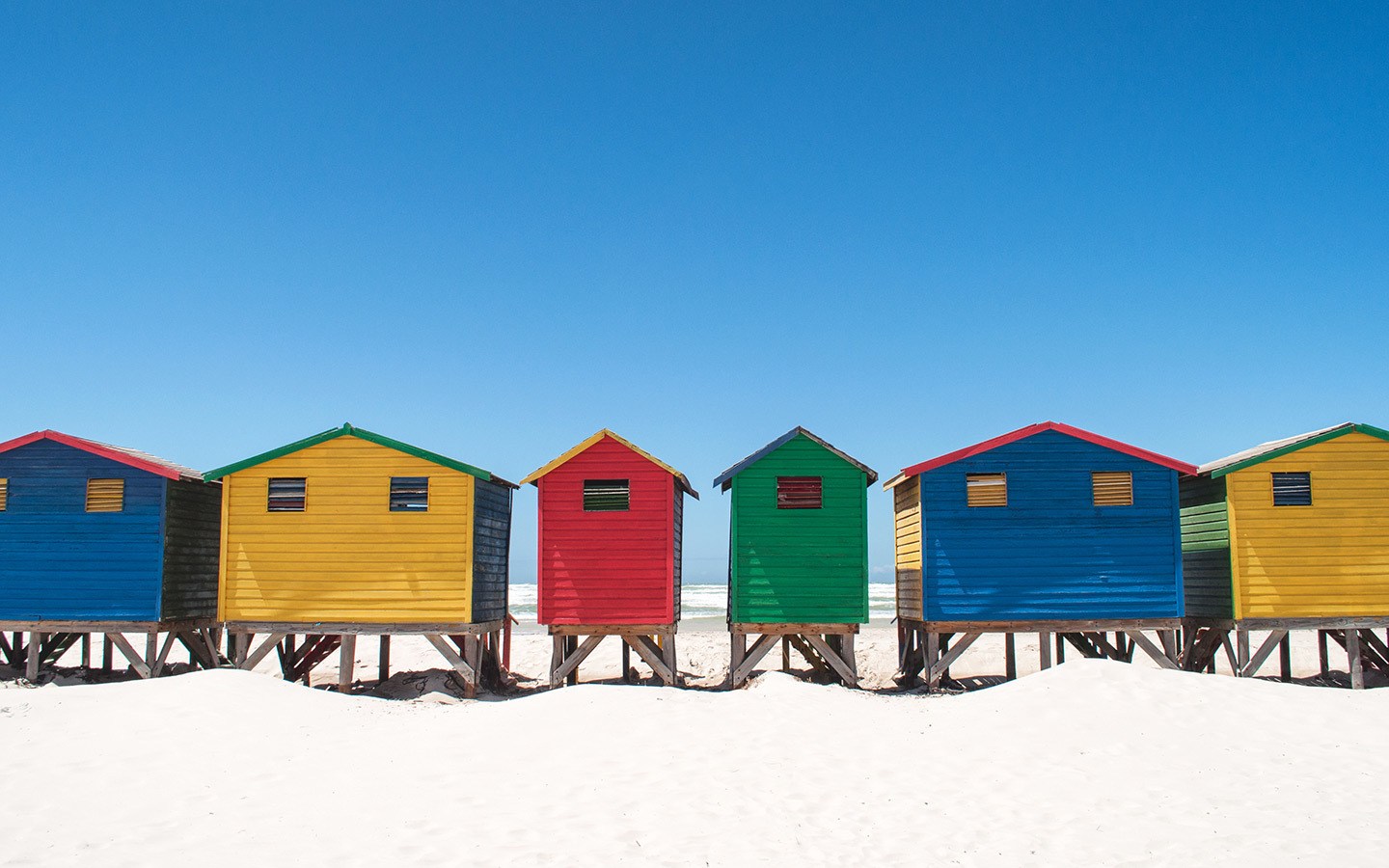 From Muizenberg the road hugs the shore for 12 miles (25 minutes) to Boulders Beach – home to the stars of the show, the penguins. Two breeding pairs pitched up here in 1983 and because fishing was restricted in False Bay the colony has grown to over 3000. Africa’s only penguin species is endangered so this is one of the few places you can get up close to them. After paying our entrance fee (which helps with conservation) we followed the boardwalk through the dunes to the viewing platforms on the beach.

It wasn’t long until we spotted our first penguins tucked into nesting boxes and below the path, and by the time we got to the beach we were surrounded. They’re sleek and graceful in the water, but on land it’s a different story as they waddle around and try not to get washed back out to sea. They’re fascinating to watch as they sun themselves and preen on the beach. But cute as they are, there are lots of signs warning you not to get too close – their beaks are razor-sharp and if they feel threatened they’ll give you a good nip. 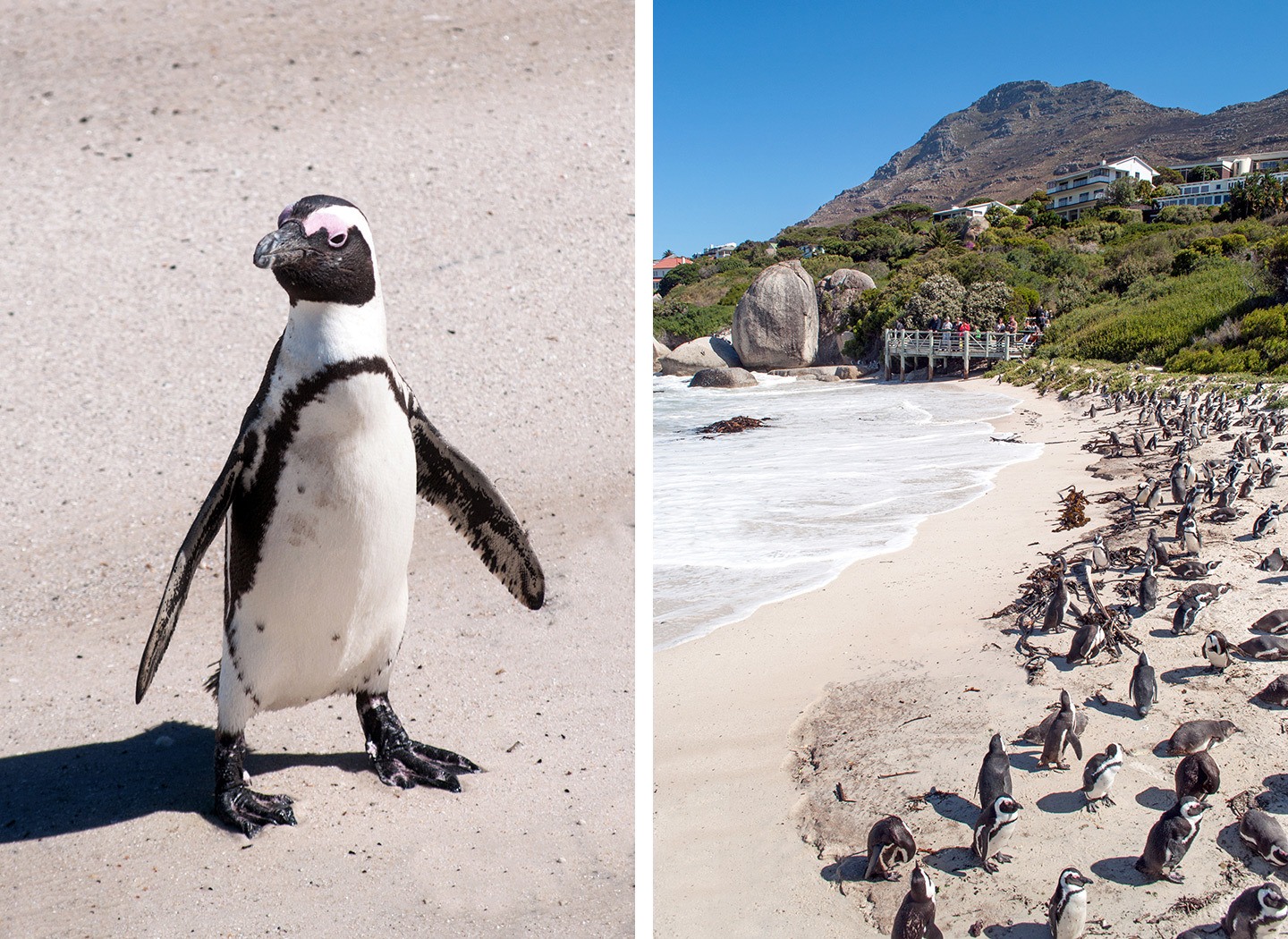 Back on the road (having resisted stealing a penguin), another 14 miles (30 minutes) south took us to the Cape of Good Hope. It might not really be the southern tip of Africa (the real southernmost point is Cape Agulhas, 95 miles east), but the views and unspoilt landscape are well worth a visit. Cape Point is a nature reserve that’s part of the Table Mountain National Park, so keep your eyes out for wildlife, especially cheeky baboons who’ll steal anything they can get their hands on. At the Cape you can walk or take the Flying Dutchman Funicular up to the lighthouse and look out over vast ocean where the next land is Antarctica. There are lots of walking paths and bays to explore. And tucked underneath the visitor’s centre is a good restaurant where we stopped for lunch and a glass of wine on a terrace with a panoramic view. 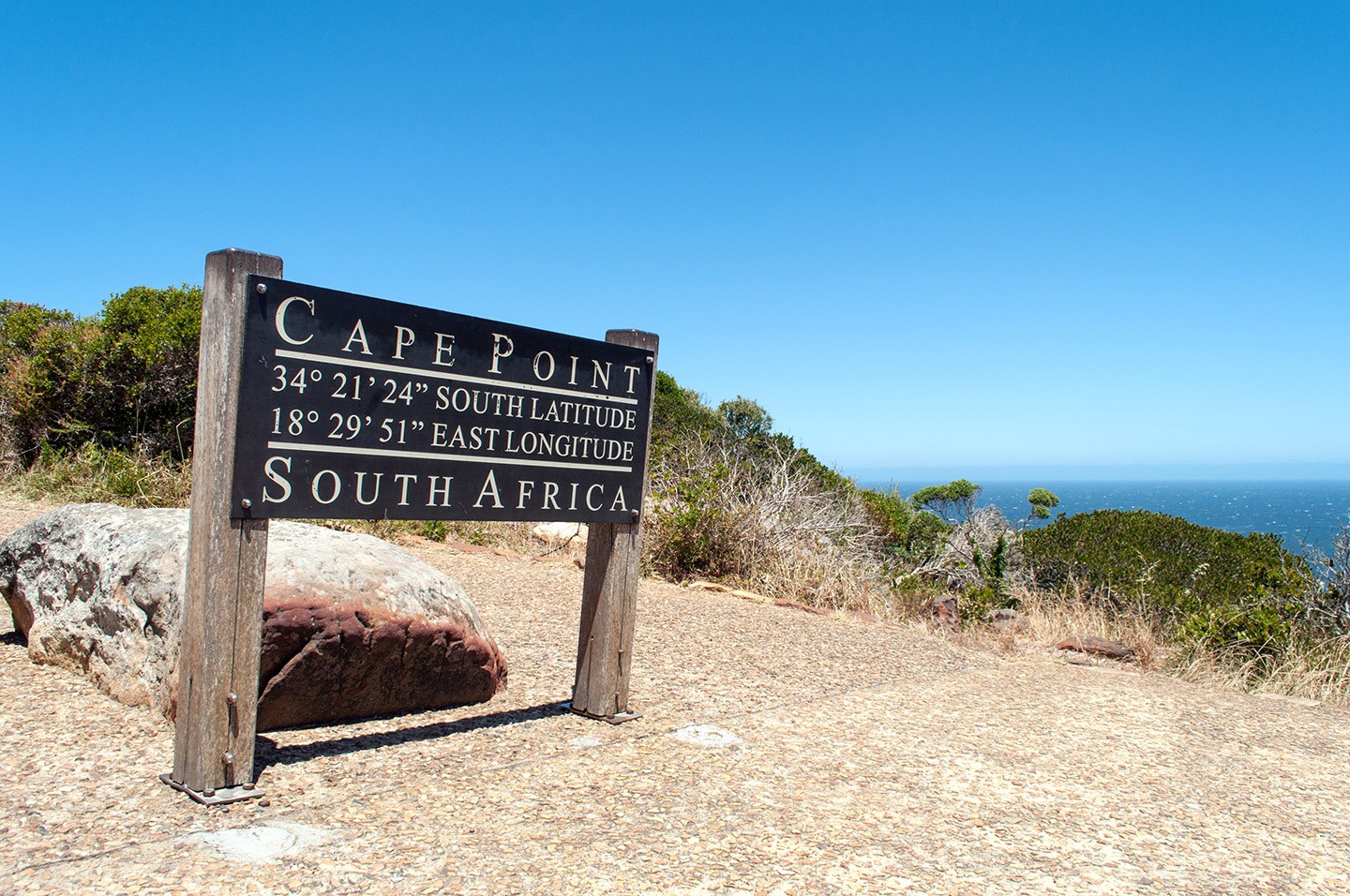 From the Cape it’s a 27-mile (55-minute) drive back to the main road and across to the west coast of the peninsula where you’ll find Chapman’s Peak Drive. Rated as one of the world’s most spectacular coastal drives, it runs for just under six miles between Hout Bay and Noordhoek. The road was built in the First World War and zig zags through 114 bends as it hugs the edge of the cliff. It’s an impressive feat of engineering – though there have been a few rockfalls so it’s sometimes closed in bad weather. It’s hard to keep your eyes on the road as you wind your way between rocky peaks and crashing waves (maybe even spot a few whales and dolphins), but there are plenty of viewpoints to pull in at and soak it all up. 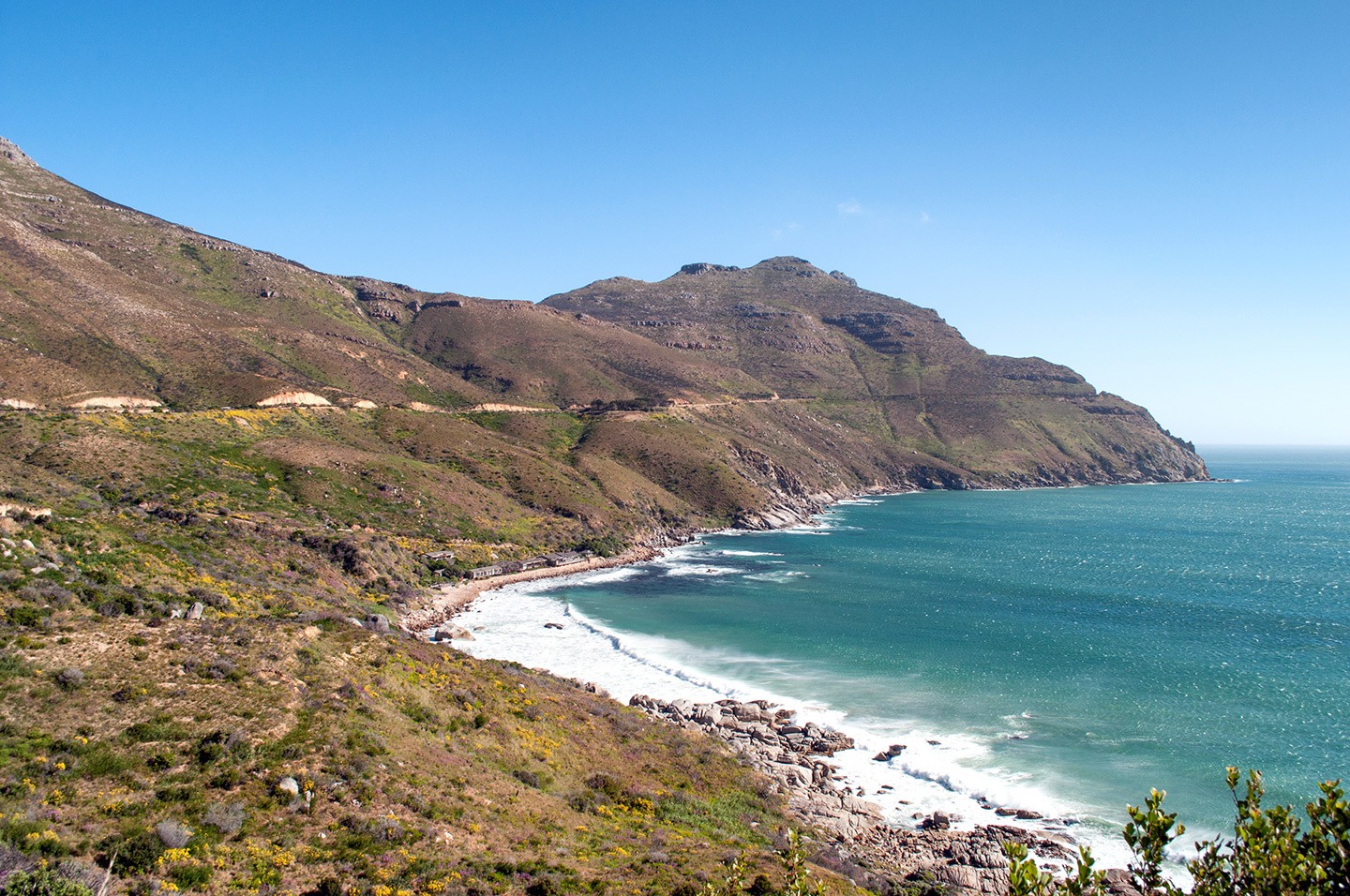 Looking back on Chapmans Peak Drive

At the end of Chapman’s Peak Drive the road heads inland for 4 miles (10 minutes) before emerging back out by the ocean at Llandudno. A bit of a contrast to its Welsh namesake, this Llandudno has no streetlights, no shops and some of South Africa’s most expensive houses. It’s one of a 10-mile string of Cape Town coastal suburbs that runs through Camps Bay, Clifton, Bantry Bay and Sea Point. Camps Bay is one of the biggest, with another stretch of white sand and a row of bars and restaurants behind which are the perfect spot to stop and watch the sun go down before driving the final couple of miles back into the city. 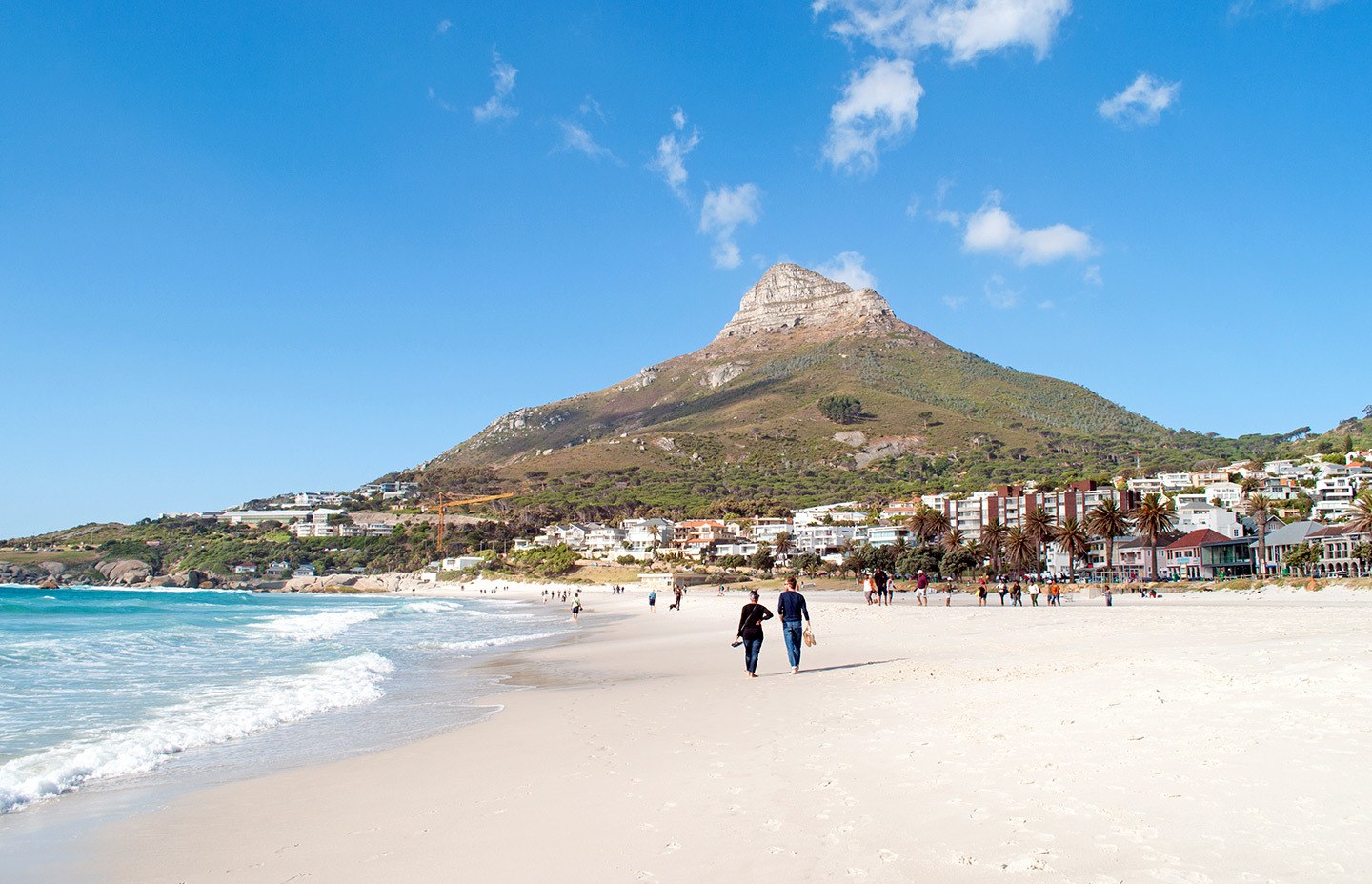 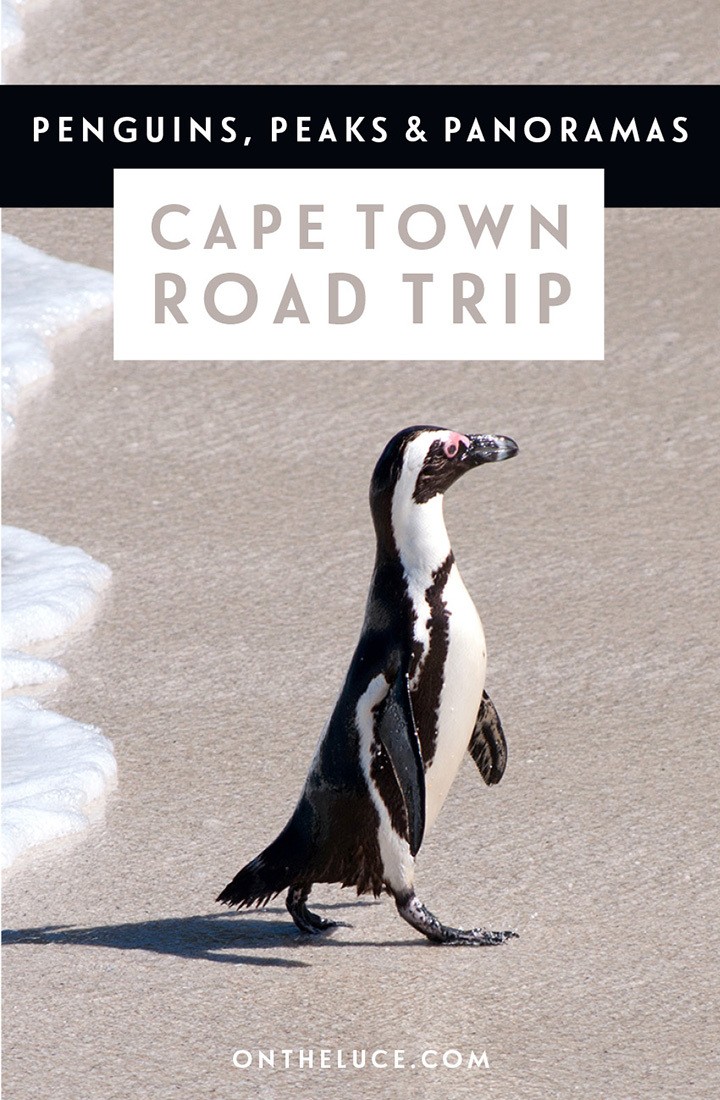