A day trip to Bristol 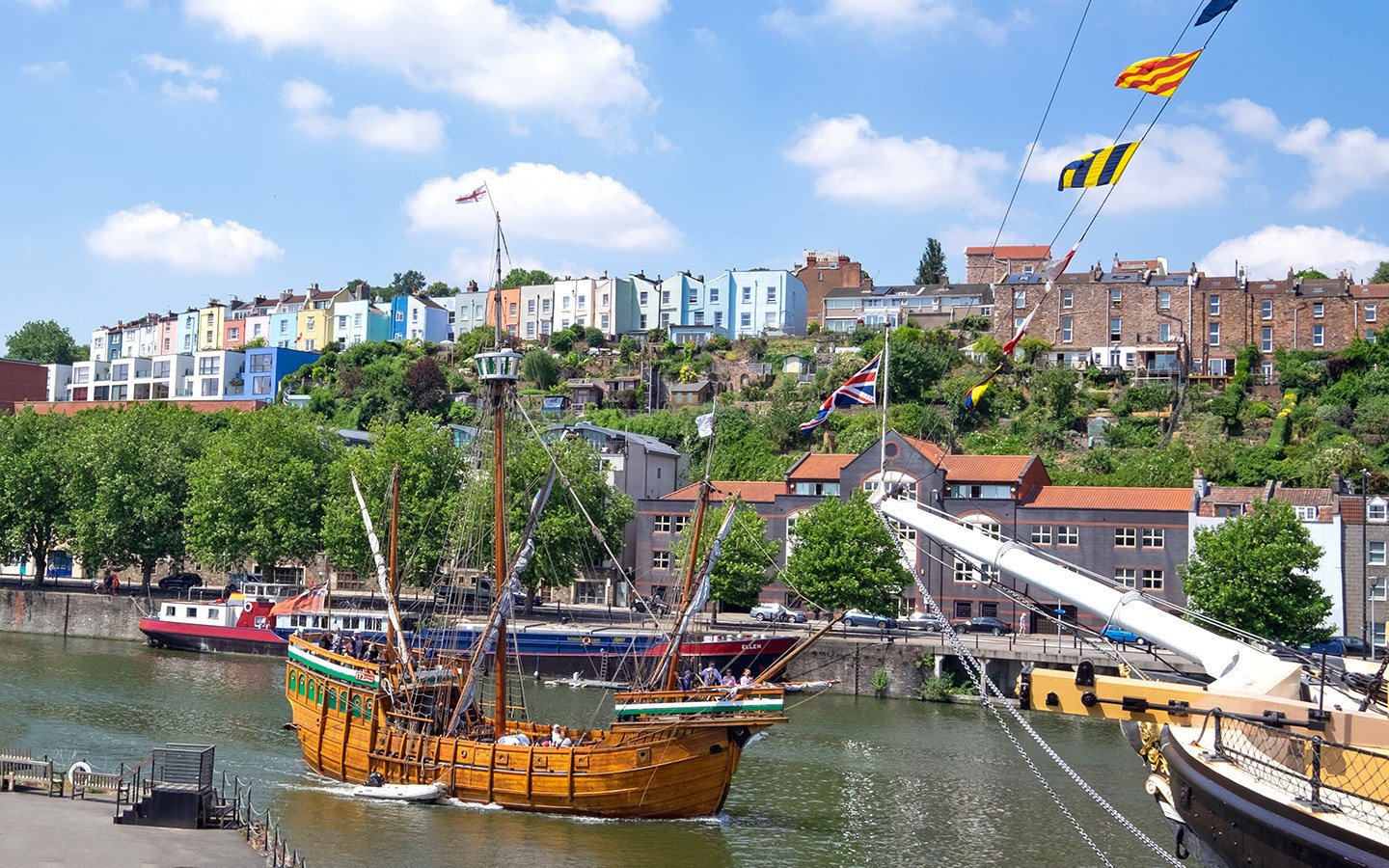 Where can you travel in one day? I try to fit in as many trips as I can, but it sometimes feels like it’s not worth visiting somewhere for just a day. That you can’t see enough or it’s not good value for money. But is that really the case? This month I partnered with National Express to see where you can go in a day without spending a fortune. National Express coaches cover 900 destinations, with thousands of tickets for less than £5 one way. And you don’t have to compromise on comfort, with leather seats, air con, charging points, toilets and free on-board entertainment included. So I headed out on a day trip to Bristol to try it out – as well as sharing five other great day-trips which cost less than £10 return from London. 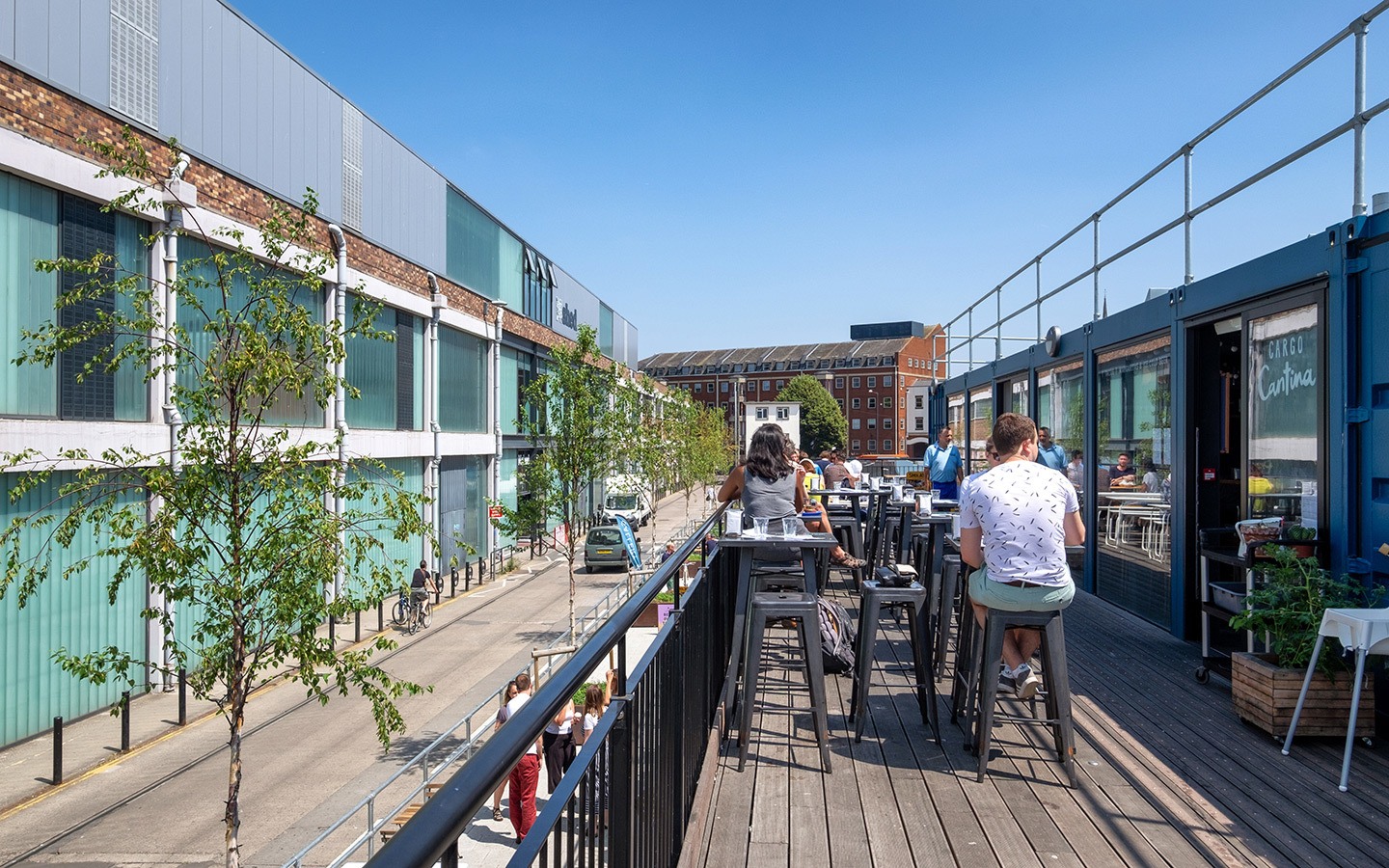 Do: Take a Bristol bike tour

There are so many great things to do in Bristol, but with just a day to spare I had to choose just a few. The city is proud of its green credentials and among them it’s been named the UK’s first ‘Cycling City’. The network of cycling paths make a bike the best way to get around. You can even cycle all the way to Bath, but we stuck to central Bristol and the harbour with a guided tour from Cycle the City. Their Sightseeing Tour is a good overview, taking you on a five-mile loop around Bristol’s highlights – it’s not too hilly and on car-free paths so you don’t need to be an expert. 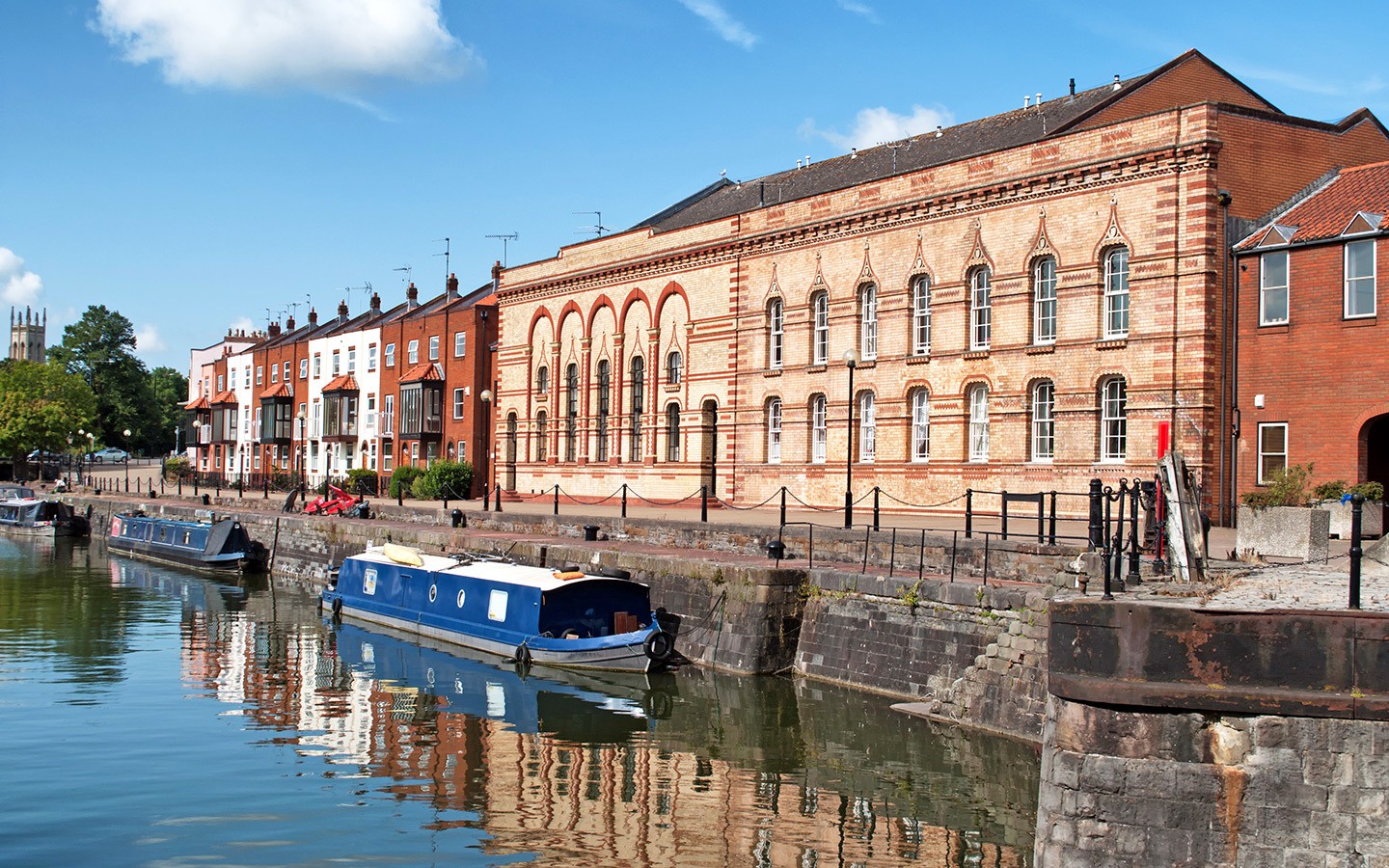 The best thing about having a guide was the hidden spots we came across – from a perfect view of the Clifton Suspension Bridge to Banksy street art tucked away down a side street. The tour takes in the historic harbourside, the route of the ancient city walls and modern highlights like St Nicholas Market and the underground Bristol Dry Gin distillery. We got to hear plenty of stories of Bristol’s past along the way too, from its days as home to 16th-century smugglers to its reinvention as an artistic, alternative hub.

A 2.5-hour sightseeing tour with Cycle the City costs £18 per person, starting from just outside No. 1 Harbourside (next door to the Tourist Information Centre) at 11am (2pm on Saturdays). 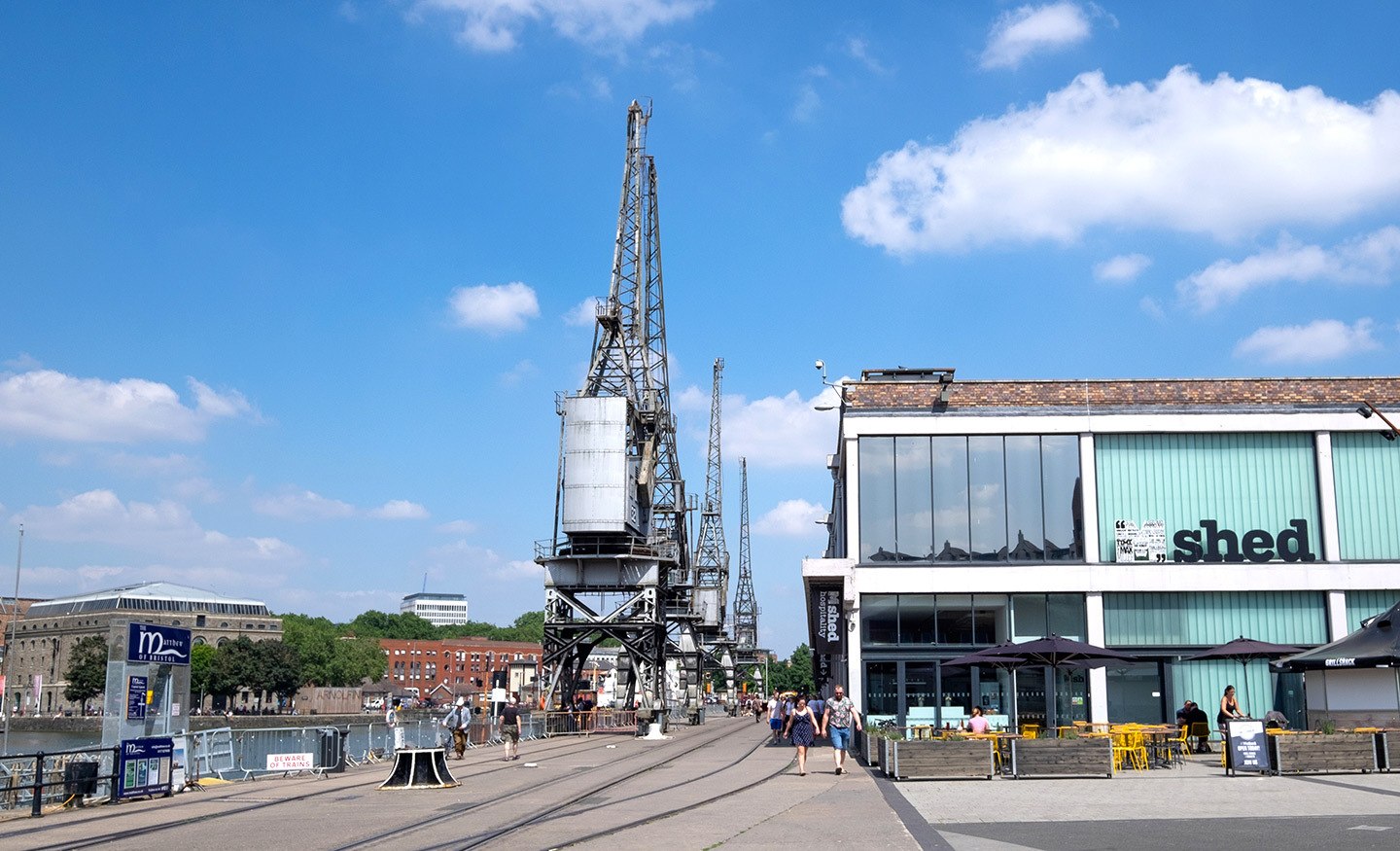 M Shed in the harbour

Living in a time when you can fly almost anywhere in the world within a day, it’s hard to imagine what it was like when crossing the Atlantic took a couple of weeks. But you can take a trip back to the golden age of steamship travel in Bristol’s dockside at the SS Great Britain. She was built in Bristol in the 1840s by Isambard Kingdom Brunel, and was the world’s longest passenger ship. After shuttling passengers across the Atlantic, migrants out to Australia and coal around the world she was eventually sunk off the Falkland Islands in the 1930s until she was rescued from the sea bed in 1970 and returned back to her roots in Bristol. 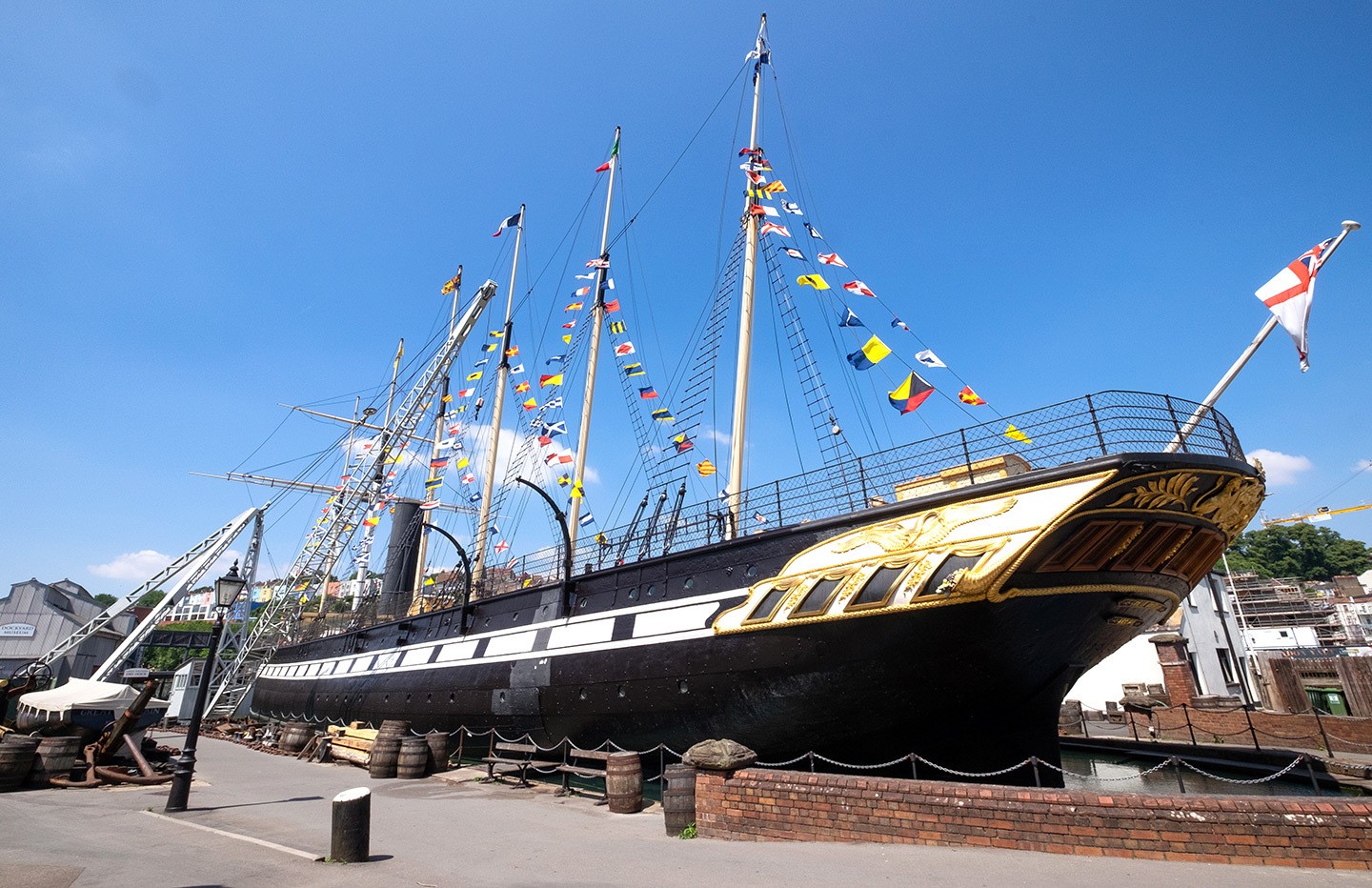 The last time I visited SS Great Britain was on a primary school trip, but the museum has come a long way since. First we headed underneath the ship to the dry dock, a huge dehumidification chamber that stops the elements doing any more damage. With a layer of water above the glass roof the light ripples make you feel like you’re underwater. Up above we toured through the decks, from first class to steerage, the kitchens and cargo holds. The sounds and smells bring those trans-Atlantic journeys to life – the SS Great Britain might’ve been a luxury liner but space was tight and you certainly got up close to your fellow passengers. 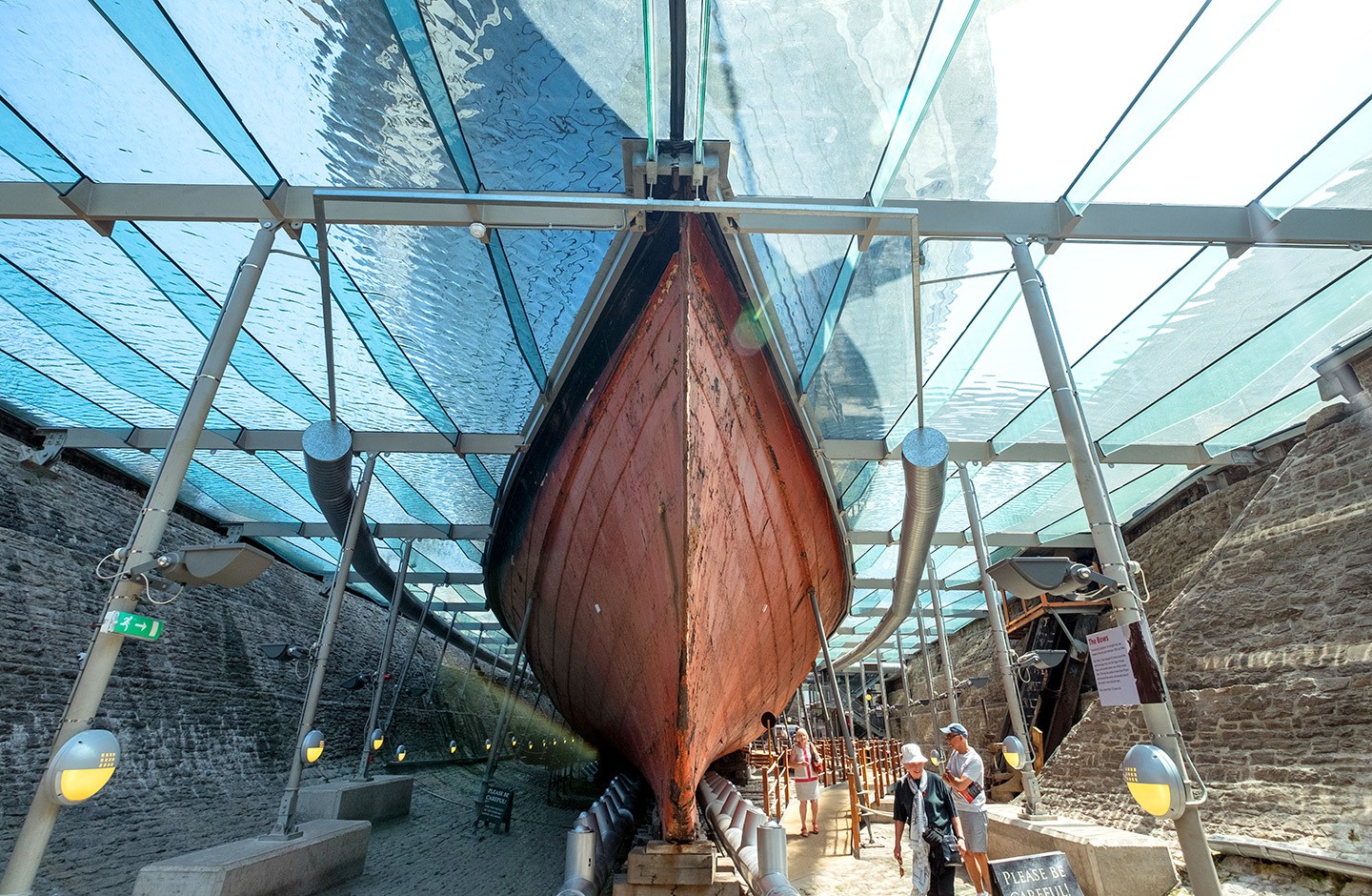 We also called into the new Being Brunel exhibition, which takes you into the mind (and the top hat) of this engineering genius. Brunel has left his mark all over Bristol and beyond, from the Clifton Suspension Bridge to Temple Meads Station and the Great Western Railway. He was a real innovator – one of the most important engineers in British history. The museum is a look at his life and legacy through his personal sketches, diaries, photographs and paintings. As well as the genius engineer you get to see the human side of him too, his worries and his fears – as well as his extreme love of cigars, smoking 40 a day! 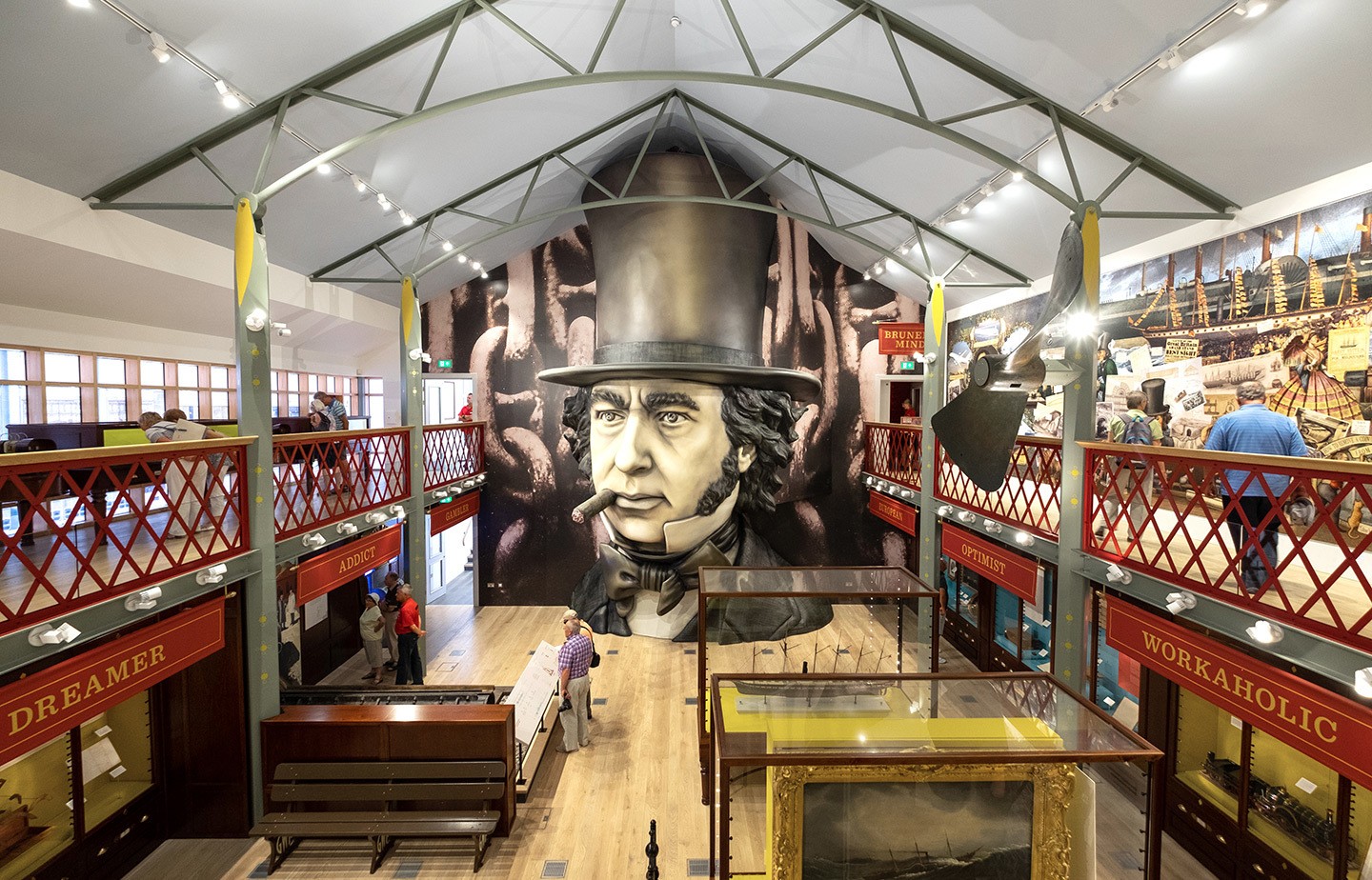 The Being Brunel exhibition

Bristol is a real hub for independent food producers, restaurants and bars, and one of the newest destinations for the city’s foodies is Wapping Wharf. This area of the harbour was derelict until recently but it’s been converted into a smart modern development. And right in the middle are Cargo 1 and 2 – a stack of shipping containers turned shop and restaurant development. It’s full of all sorts of unique businesses, from Indian street food and salt beef sandwich shops to a yoga studio and bamboo clothing store. 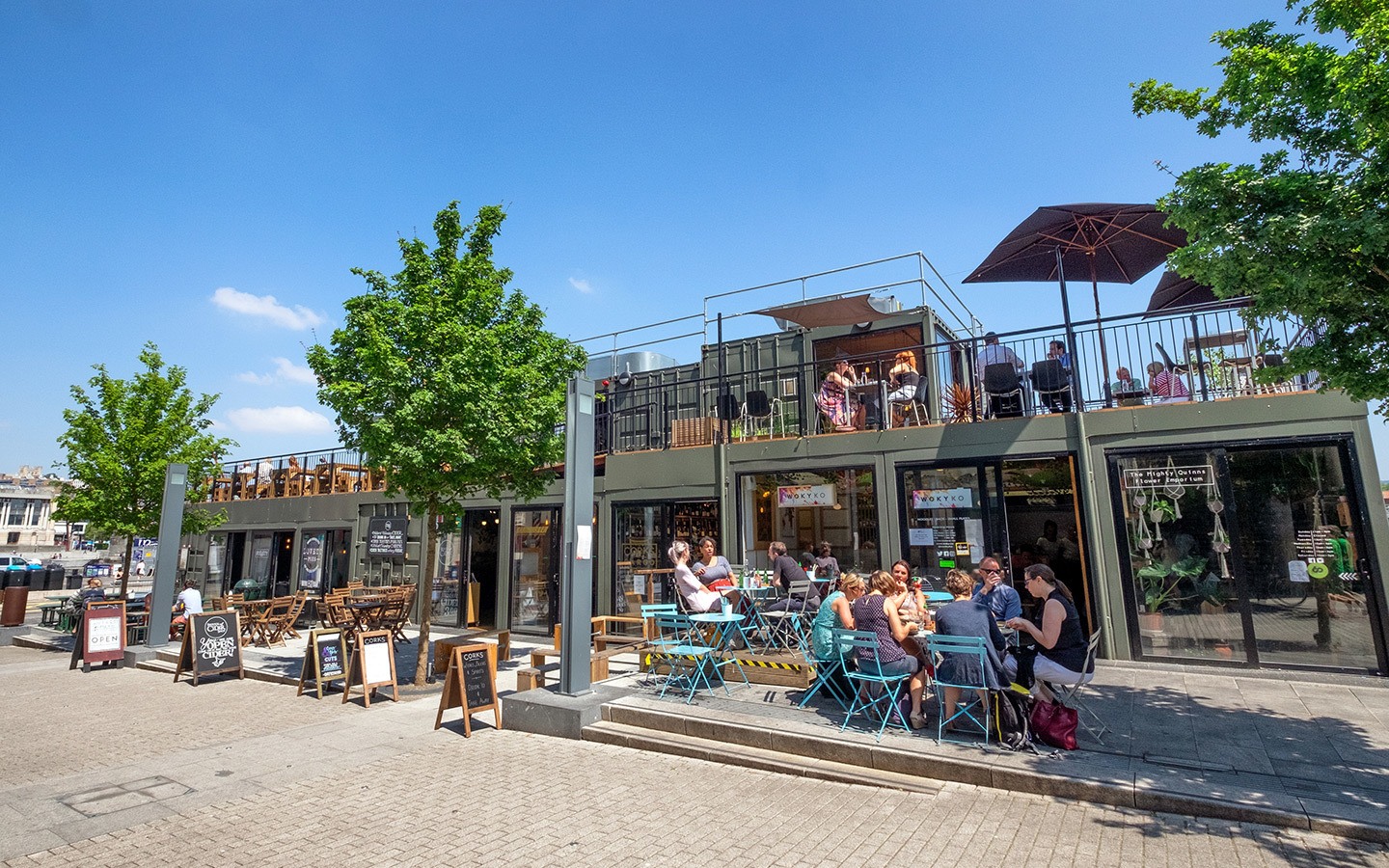 We wandered through the upper and lower decks of the containers with lots of delicious smells wafting by and people catching some lunchtime sunshine at the outdoor tables. It’s the sort of place where you could happily spend an afternoon eating and drinking. Around Cargo there’s the pedestrianised Gaol Ferry Steps with more shops and restaurants – all independent of course. We stopped off at the Wild Beer Co, a Somerset-based microbrewery come restaurant, for their tasty lemon infused gin and a veggie platter. 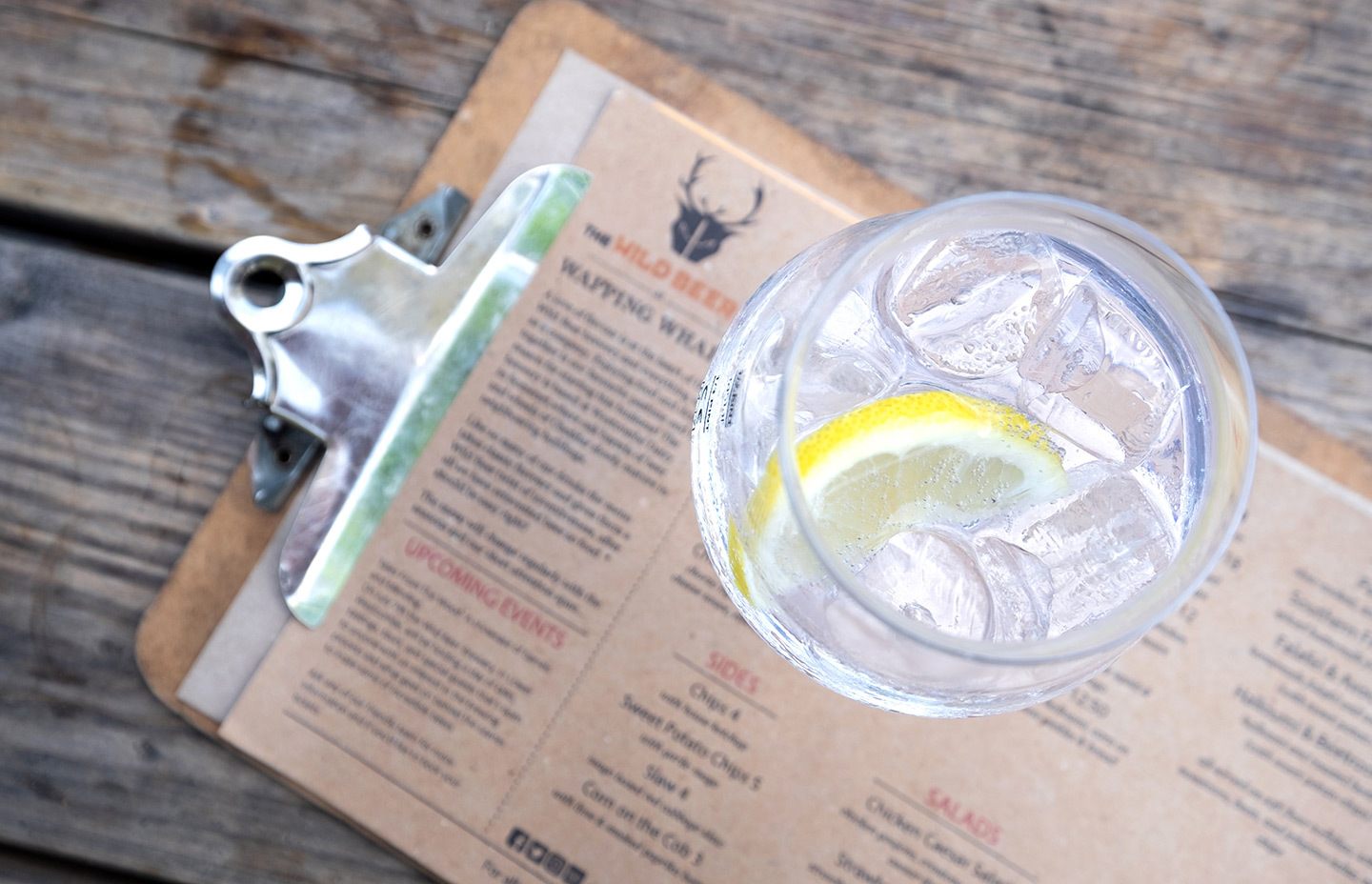 Get there: National Express

National Express cover over 900 destinations, including 24-hour access to all the major UK airports. Tickets from London to Bristol cost from £5 each way (plus a £1 booking fee). My journey was quick and easy, taking me right into central Bristol – the coach station is 15 minutes’ walk from the harbour. After struggling to get a seat on the train recently it was good to be guaranteed a seat (my top tip is to get on early and bag one of the front rows of seats for tons of leg room). To keep you occupied along the way there’s wifi, a free magazine and entertainment via the VUER system – download the app for free films, TV and news. 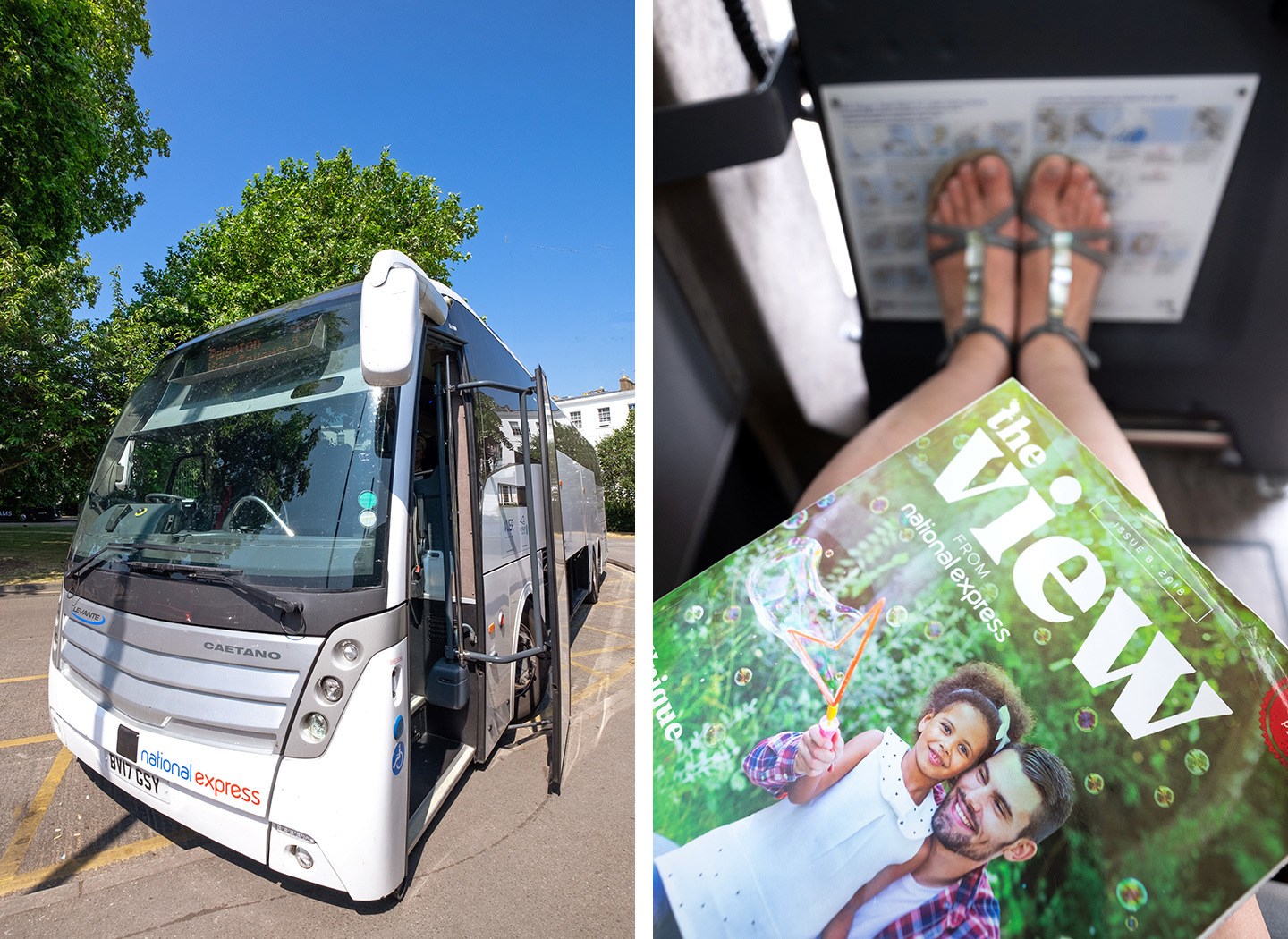 On board National Express

5 more day trips for under £10 with National Express

Bristol’s not the only bargain day trip you can take with National Express – here are five more ideas for day-trip destinations where you can bag a return ticket from London for under £10 per person.

Do: Take a dip in the thermal waters at the Thermae Bath Spa. It’s got some of the warmest geothermal waters in the UK, with massage jets, saunas, steam rooms and jacuzzis. The highlight though is the rooftop pool where you can soak away in the steaming waters with a view over the city’s skyline.

See: Almost 2000 years before the Thermae spa opened, the Romans had their own spa complex in Bath. You can take a tour around the original Roman Baths, with the ruins of the Great Bath and the ancient temple of Sulis Minerva  – though having seen the colour of the waters you won’t want to take a dip yourself.

Eat: Tuck into a bun at Sally Lunn’s – the oldest house in Bath. They’re made to a secret 17th-century recipe that came with the deeds to the house, and are a kind of brioche-style bun served with cream or butter.

Get there: National Express fares from London to Bath start from £5 each way. It takes around 3 hours to Bath from London Victoria. For a day trip you can take the 7am coach from London (arriving into Bath at 10.15am) the spend the day in the city before catching the 8.15pm coach back (arriving at 10.50pm). 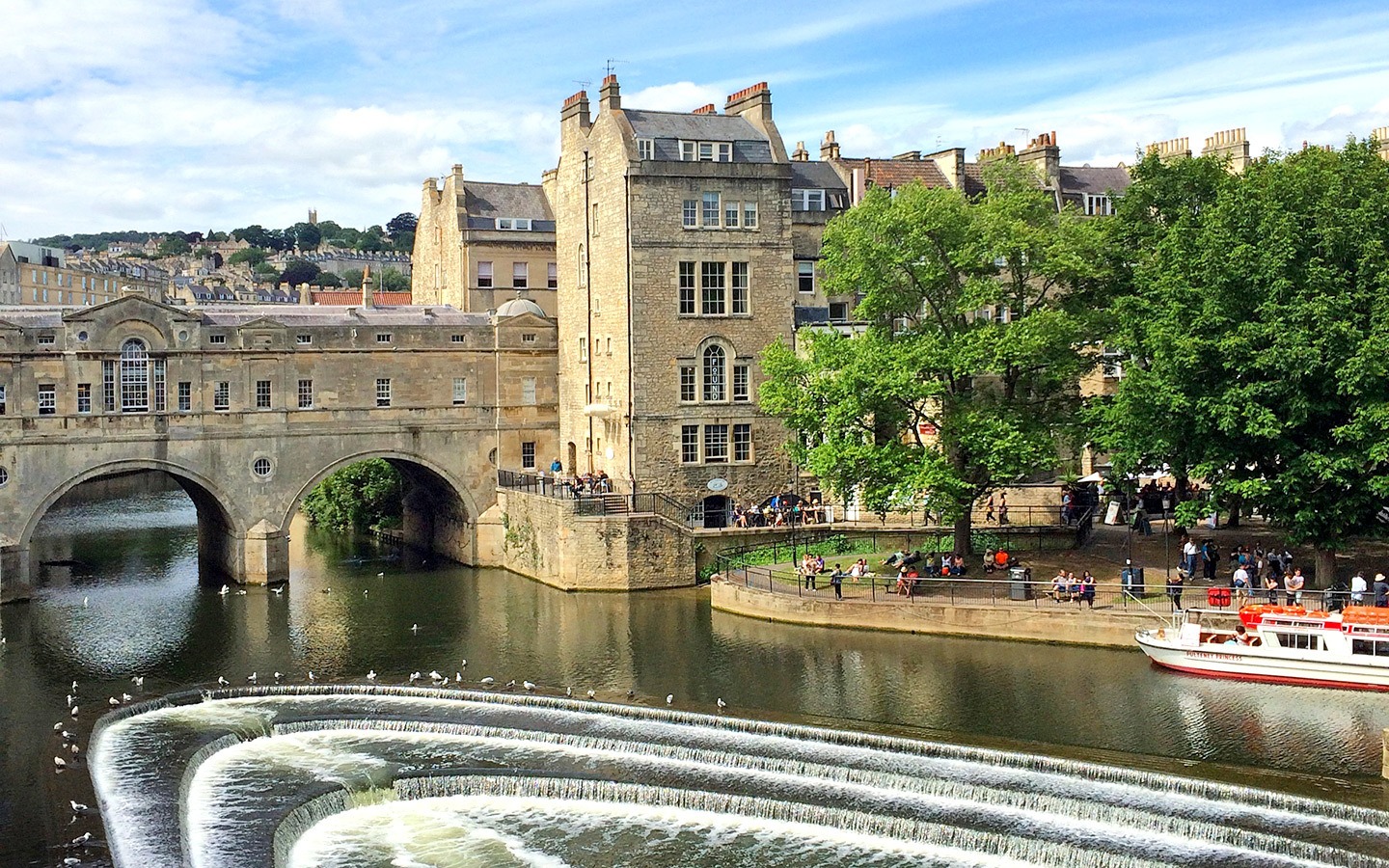 Do: Cardiff Castle has been right at the heart of the city for centuries. It’s part medieval castle and part Victorian Gothic mansion, with a side job as a wartime air raid shelter. Take the 50-minute guided tour around the elaborate Castle Apartments for a glimpse into castle life and climb the keep for a great city view.

See: Take a walk around the regenerated Cardiff Bay to see the city’s modern side. There’s a mix of the historic with the red-brick Pierhead Building and wooden Norwegian church and the ultra-modern with the copper-fronted Millennium Centre and the Senedd – the Welsh Assembly’s parliament building. 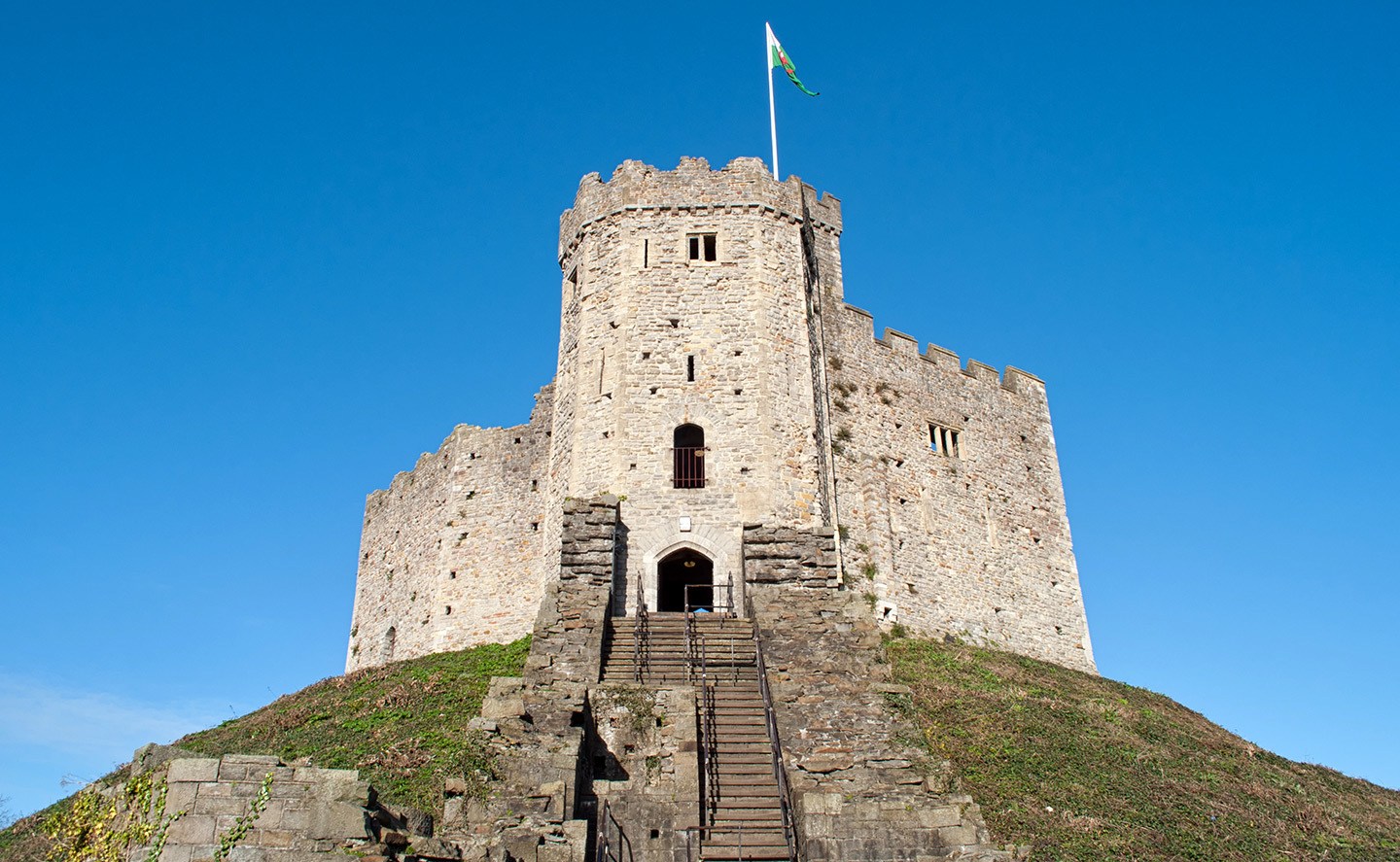 Do: Climb to the top of the Spinnaker Tower for one of the best views along the south coast from 170 metres high. There’s a glass viewing platform where you can look down on the boats below you – or the brave can abseil 100 metres down or try out the new Drop, a 25-metre leap onto a crash mat below.

See: Visit Portsmouth Historic Dockyard to see some of the most famous historic ships around, from Nelson’s flagship HMS Victory and Queen Victoria’s battleship HMS Warrior to the Tudor Mary Rose. This has recently been opened up after the long drying process was finished so you can get a closer look.

Eat: Call into the Southsea Coffee Co, just over a mile from the harbour, for top-quality coffee and lunchtime salads, sandwiches and Buddha bowls, with plenty of vegetarian and vegan options on the menu.

Get there: Coach tickets from London to Portsmouth start from £2.80 each way, and the journey takes around 2 hours. Take the 8am coach out (arriving 10.15am) and come back at 9pm (arriving 10.50pm). 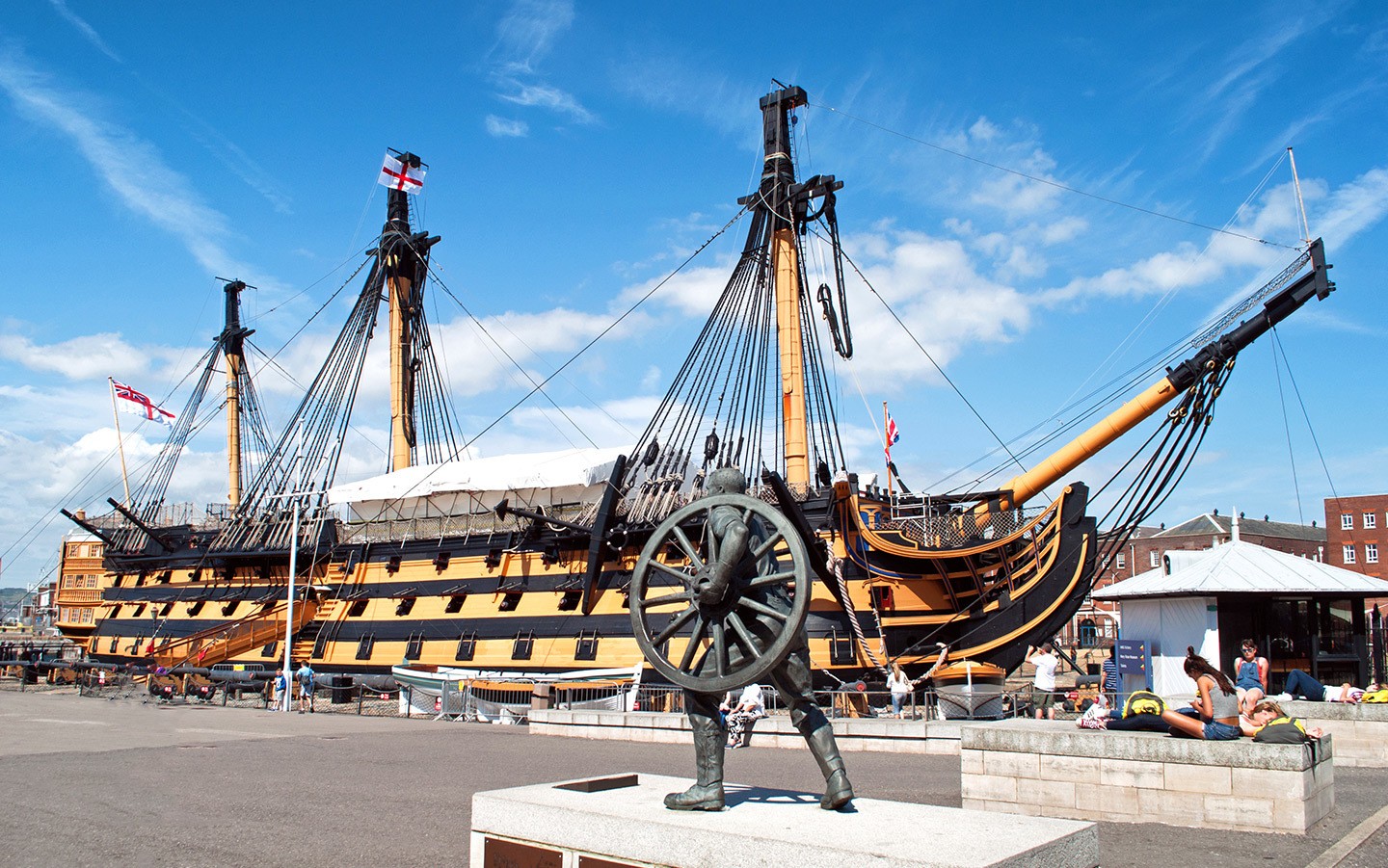 Do: Take a punt tour along the Backs – the area where the Cambridge college gardens back onto the river. You can either hire your own or take a guided tour, often led by former students. Along the way you pass beneath a string of bridges, including the famous Bridge of Sighs and quirky Mathematical Bridge.

See: Tour the colleges for an insight into Cambridge student life. There are plenty to choose from – try King’s for its ornate Gothic Chapel, Trinity for the historic Wren Library, St John’s for the Bridge of Signs, Queens for the Old Court – or one of the smaller colleges with their beautiful historic buildings.

Eat: Head to The Eagle pub on Benet Street where you can have a drink at the bar where Crick and Watson announced they’d discovered DNA – and look up for the RAF ceiling, signed by WWII pilots. 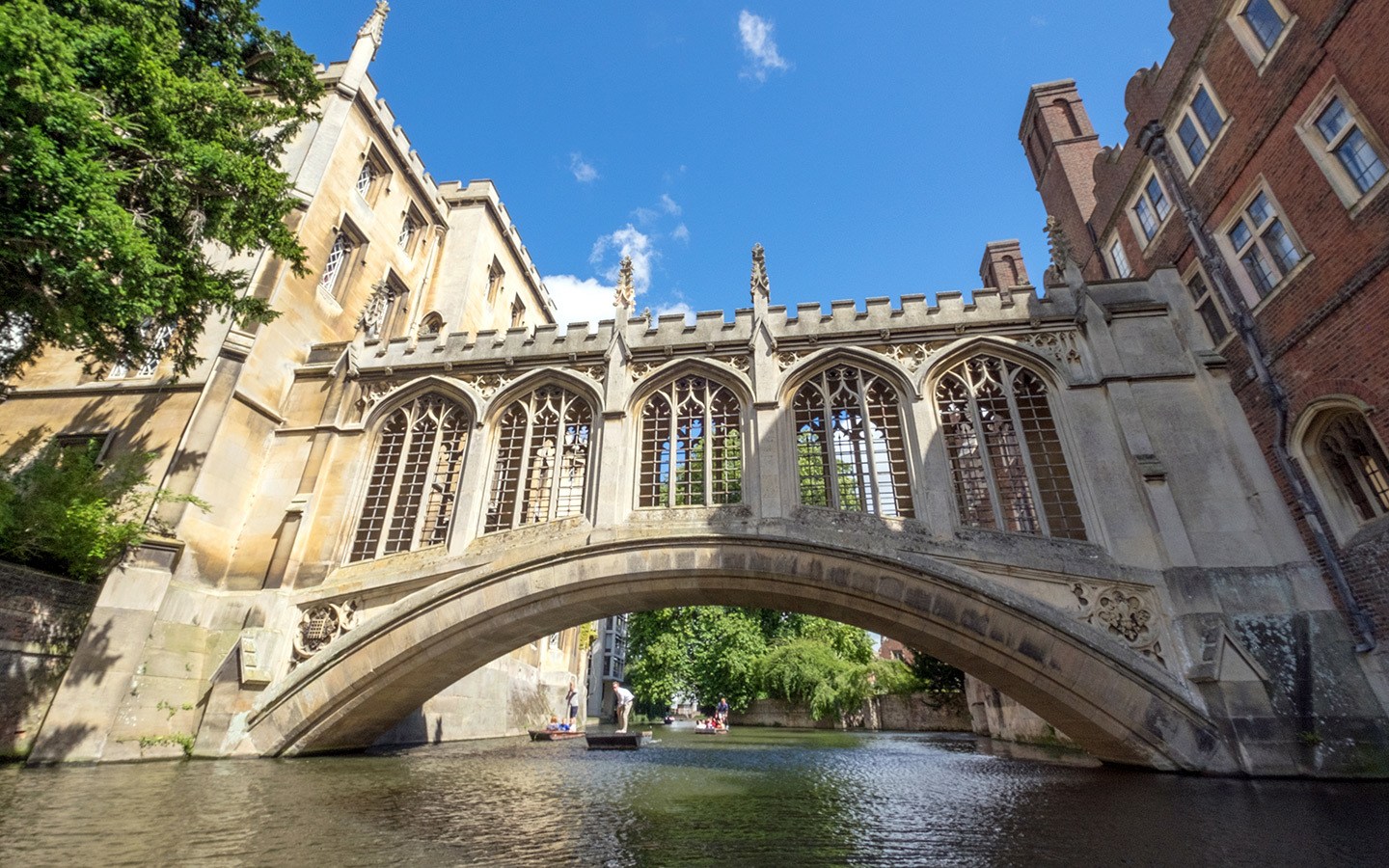 Do: Join in a walking tour led by a Cheltenham Blue Badge guide to see some of the most impressive Regency buildings and find out more about the city’s days as a spa resort for the upper classes. You can’t take a dip in the waters any more, but you still try a taste of them at the Pittville Pump Rooms.

See: Visit Cheltenham in October and you can see talks and book signings from some of the top names in the book world at the annual Cheltenham Literature Festival. There are a mix of big-name writers, broadcasters and celebrities speaking over the two weeks, as well as events for prospective authors.

Eat: Head to The Daffodil, an Art Deco cinema turned bar and restaurant packed with 1920s style. Start with cocktails in the Circle Bar before heading down the sweeping staircase for dinner in the restaurant. 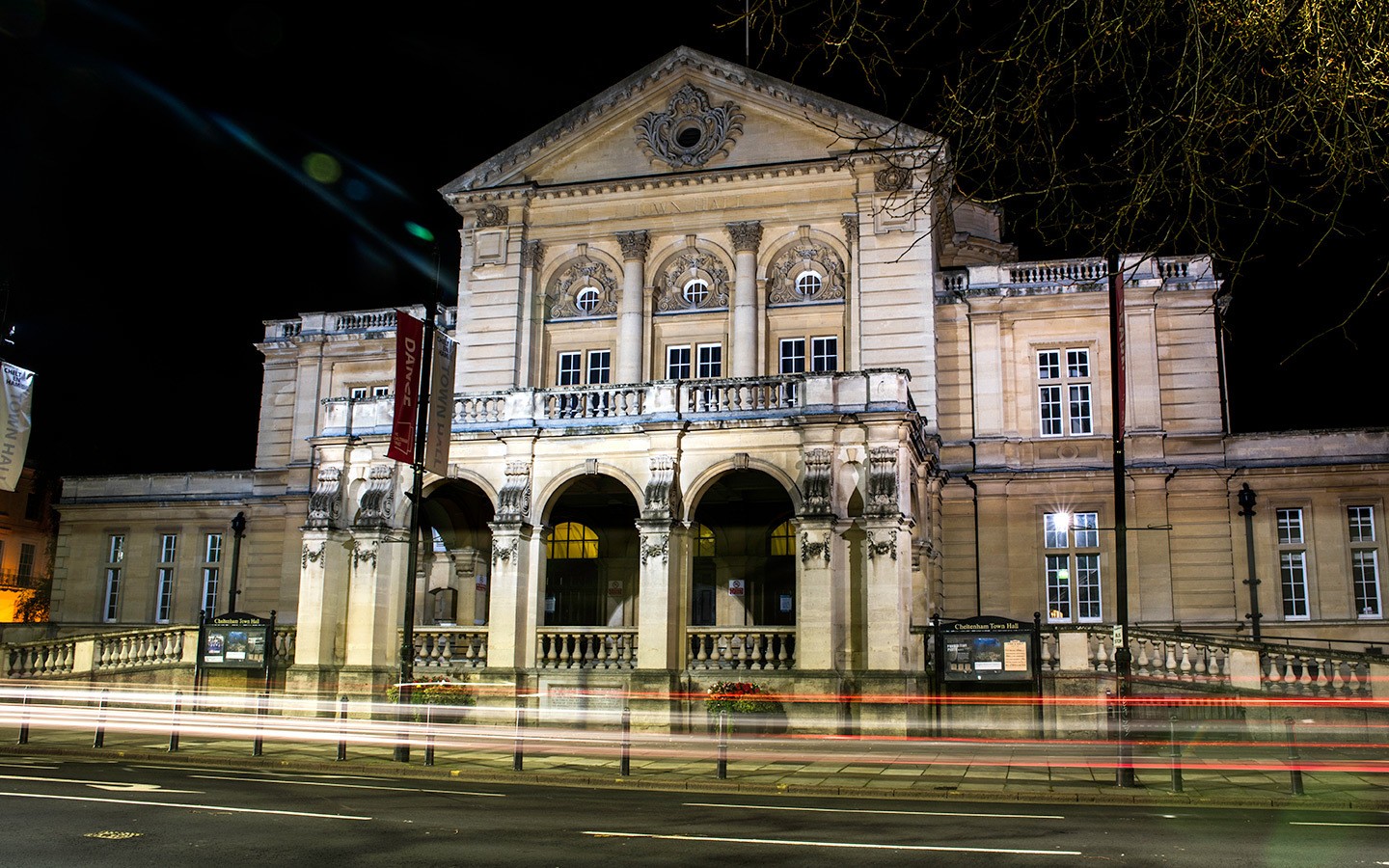 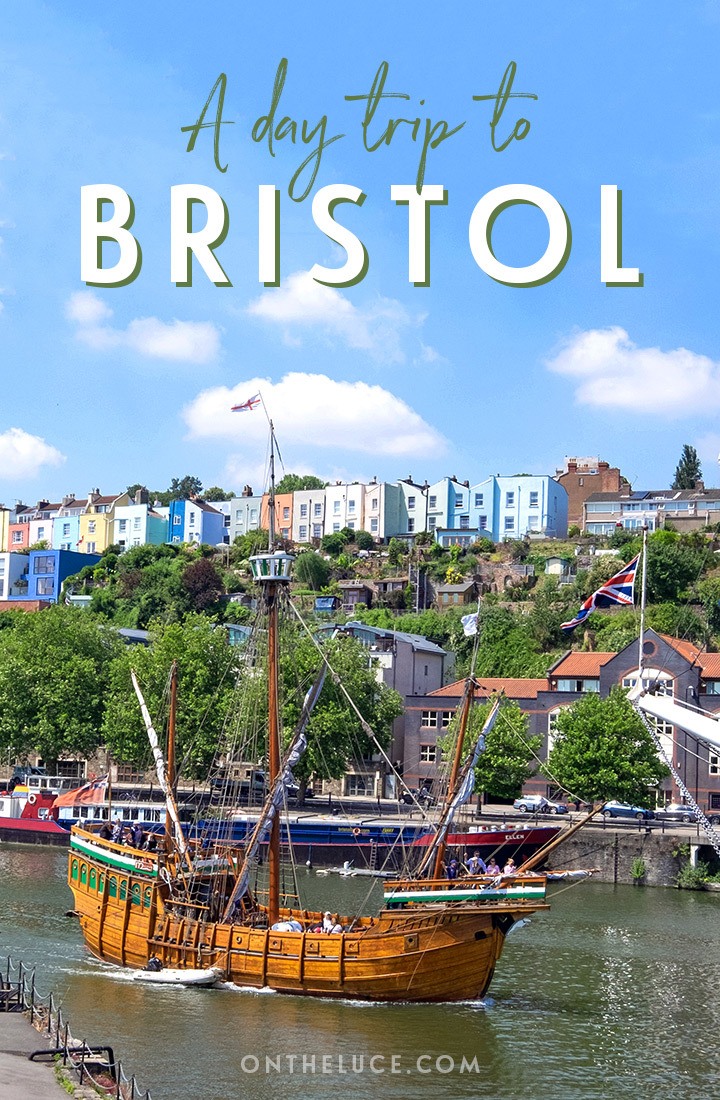 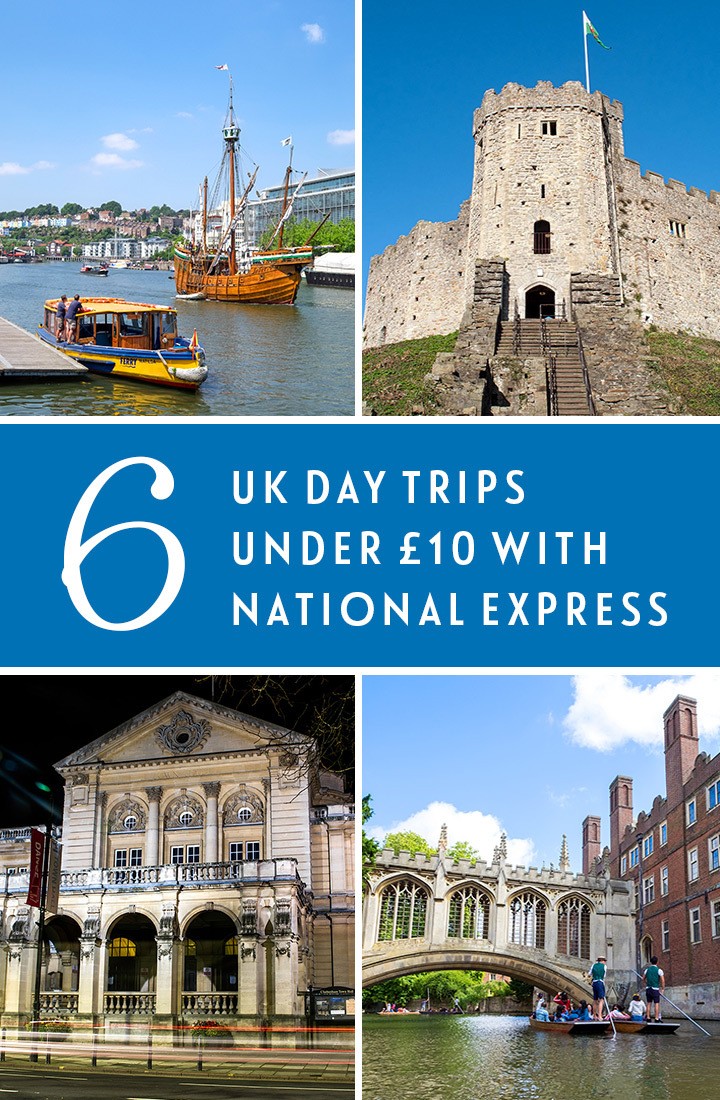 This post is brought to you in association with National Express.