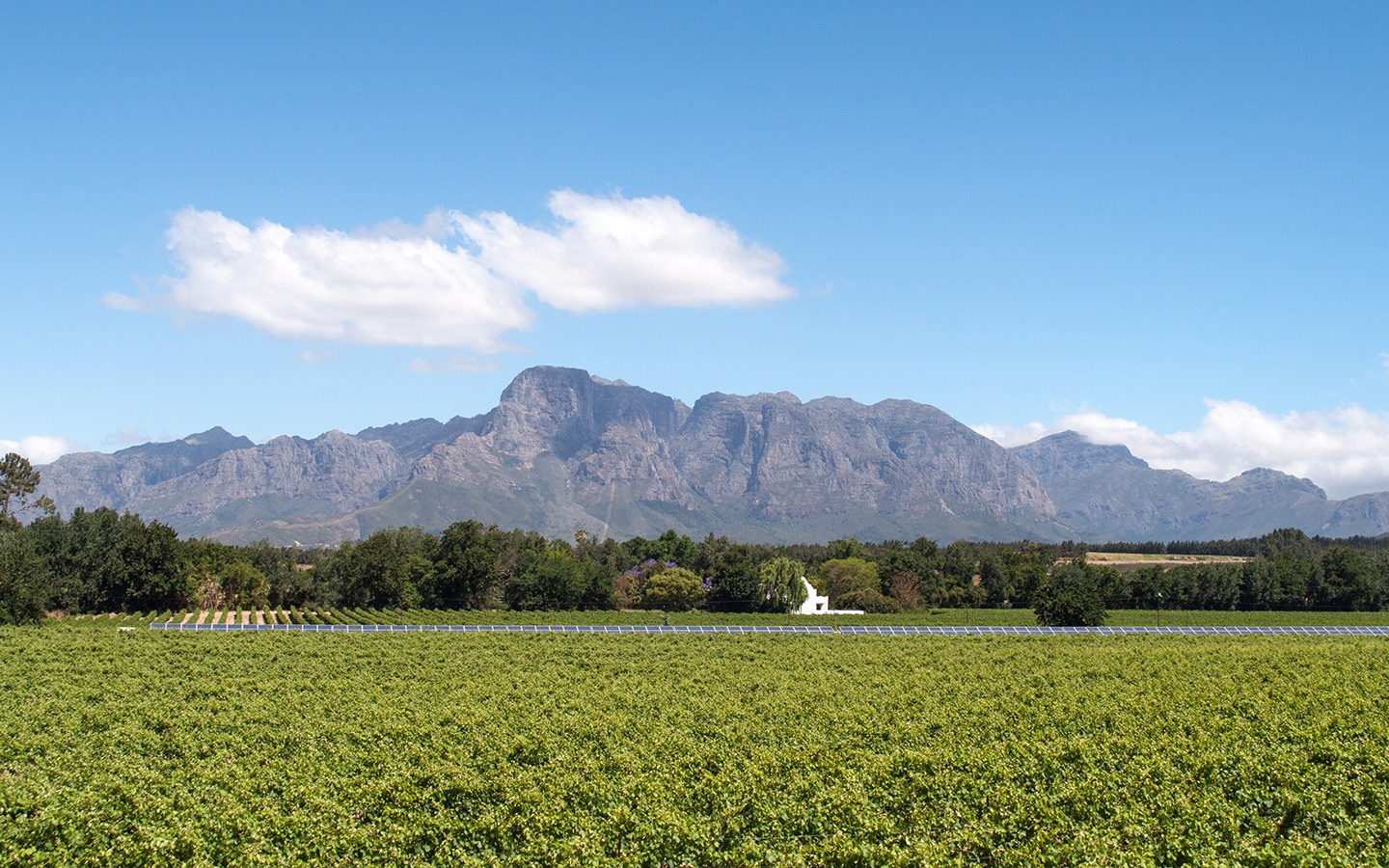 I love a good glass of wine, but like a lot of people I have my faithful favourites – a crisp New Zealand Sauvignon Blanc and a dark Argentinian Malbec are mine. When it comes to South African wine my knowledge is pretty limited, so a trip to Cape Town was the perfect time to find out more in the Cape Winelands. You don’t need to go far from Cape Town to find a wine region – actually you don’t have to leave the city at all to visit the country’s oldest wine area Constantia. But we headed a bit further afield to check out two of the country’s most famous wine regions – Stellenbosch and Franschhoek. Between them they’re home to 300 wineries so the hardest part is knowing where to start. With just a day to explore we left it to the pros and took a day tour with local wine expert Graham. On the drive out of the city we quizzed him with questions about life in South Africa and before long we were out among the vineyards. 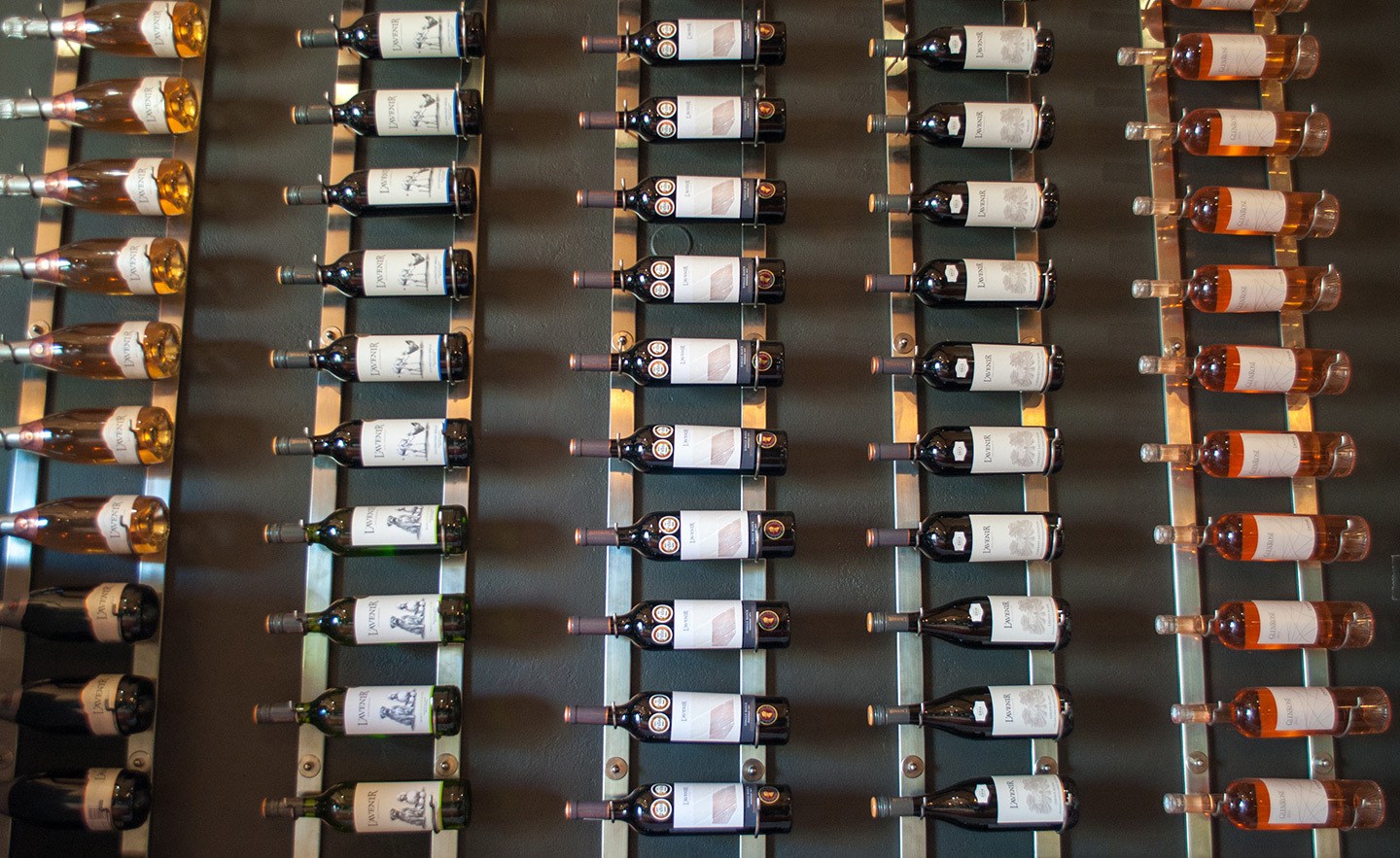 A wall of wine at L’Avenir

Our first destination was Stellenbosch, just 30 miles from Cape Town and South Africa’s second-oldest and probably best-known wine region. Wine’s been grown here since Dutch settlers arrived in the 1600s, in a gorgeous setting with valleys full of vines surrounded by mountains, bright and green on a spring morning. Wine tourism’s not new here either – back in the early 1970s three neighbouring vineyards created the first Stellenbosch wine trail, then a farmer’s wife in the middle started selling cheeseboards. The rest is history, and today there are hundreds of restaurants, food producers, hotels and B&Bs in among the vines. 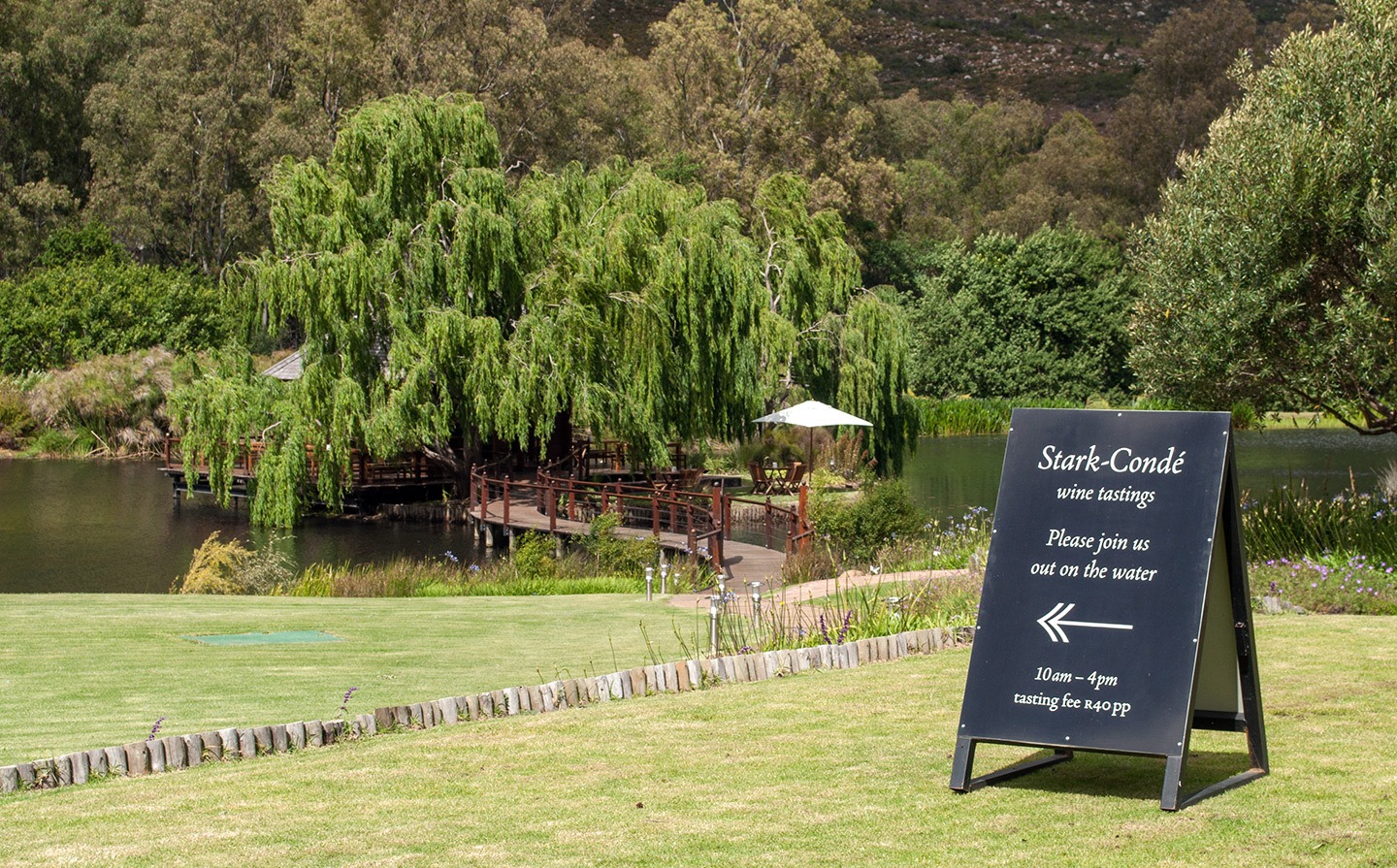 Our first winery of the day was Stark-Condé, with one of the prettiest tasting rooms I’ve seen. To get there we crossed a bridge onto a little island in a lake, draped in weeping willows around an Asian-style pagoda. We started off by trying South Africa’s most popular white wine – Chenin Blanc. It originally came from the Loire Valley in France but has really taken off in South Africa and now makes up almost 20% of all the country’s vines. The climate in Stellenbosch is kept cool because of breezes from False Bay so you also get good Pinot Noirs. Stark-Condé’s Postcard Series Pinot was a favourite with a light, soft taste and a touch of Asian spice. There are also a few Iberian influences thanks to the winery’s Spanish winemaker, like their Field Blend which mixes Portuguese grapes Rousanne and Verdelho with Chenin Blanc and Viognier. 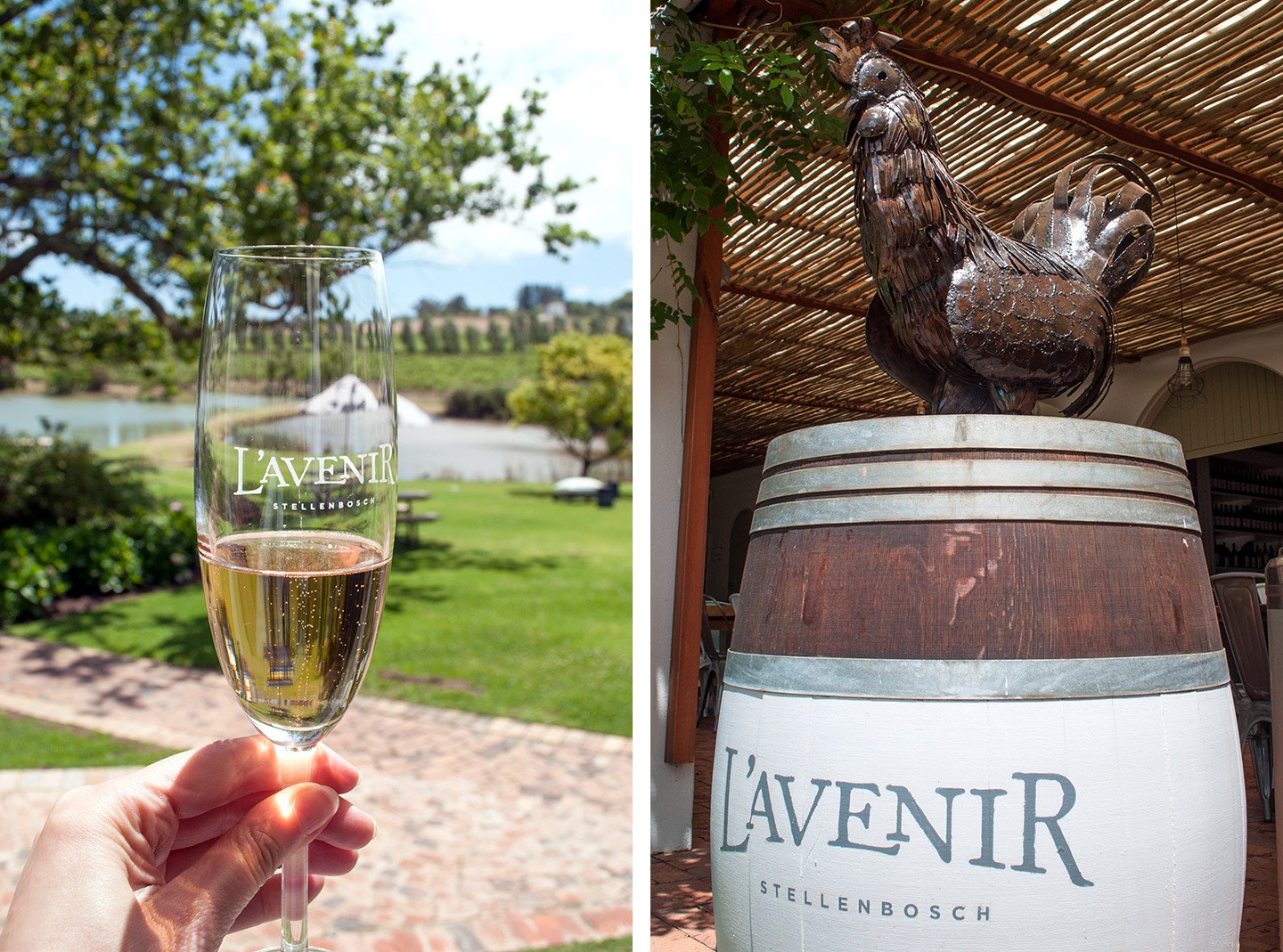 Our second winery was L’Avenir, a piece of France among the Stellenbosch vines. Its French owners have brought a real continental feel – even the toilets look like something out of a Provençal interiors magazine. Sitting on the terrace overlooking the vines with a chilled glass of bubbly felt like I’d been transported to Reims. At least until I saw the prices – a bottle of their top-notch Future Eternal Brut sets you back 210 ZAR (£12.50) as opposed to £30 plus for Champagne. Méthode Cap Classique is South Africa’s version of Champagne and was one of my best discoveries of the day. They use the same grapes as Champagne, make it the same way and age it in French oak barrels for the same amount of time. But because it’s not made in France it doesn’t have the same price tag – perfect for bubbly-loving bargain-hunters. 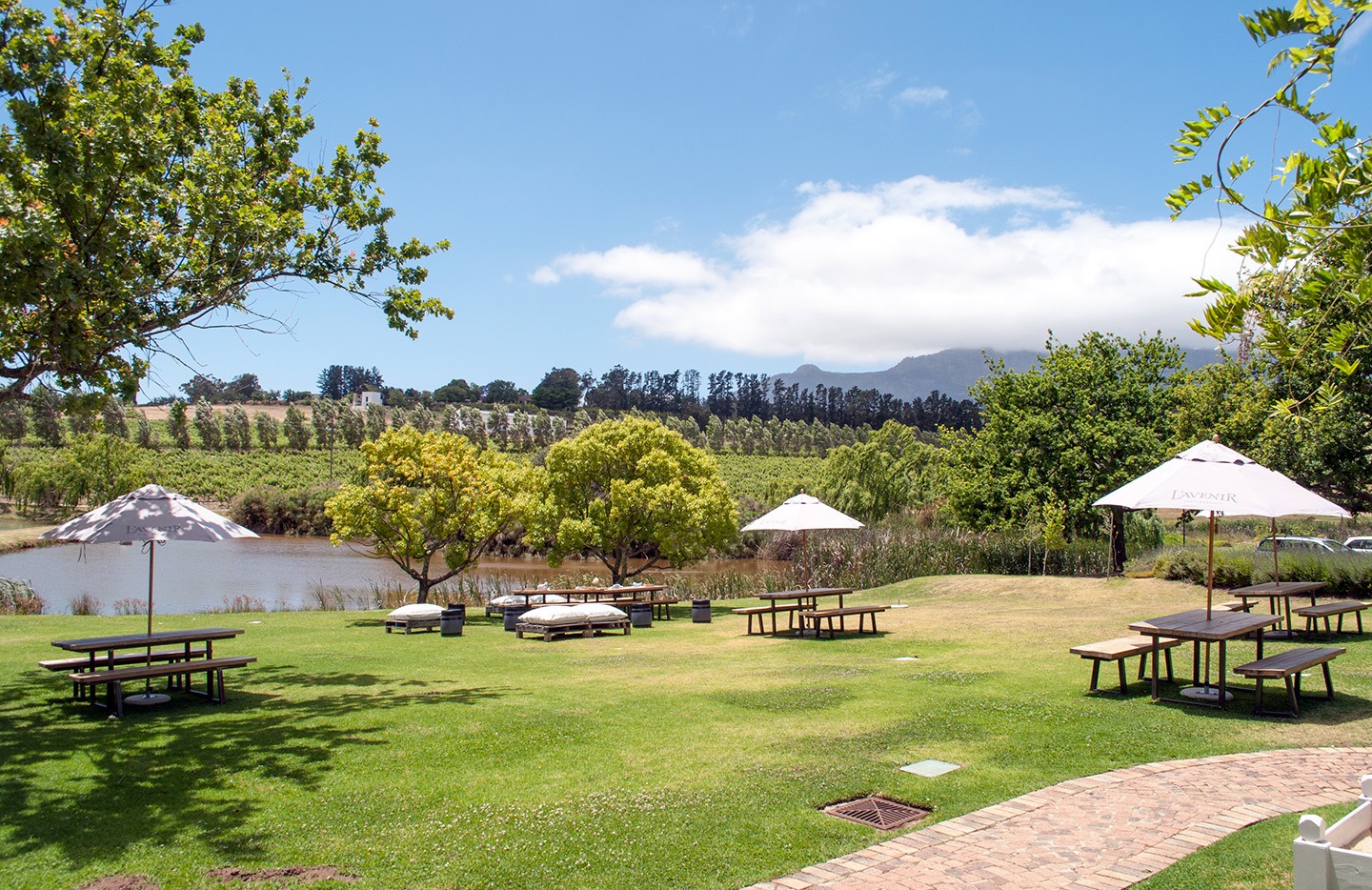 Next up was red wine experts Kanonkop, the place to try South Africa’s most famous red – Pinotage. This local grape variety is made from Pinot Noir crossed with Hermitage (which is also known as Cinsault and is one of the grapes that make up France’s Châteauneuf-du-Pape wine). It was created at the University of Stellenbosch in 1925 to try to combine Pinot Noir’s flavours with Hermitage’s hardiness. Now it’s made into a range of reds and rosés, which vary from light and fruity to intense and savoury. We also tried a couple of Kanonkop’s Cape Blends – South Africa’s local version of Bordeaux which contains 30%–70% Pinotage as well as other red grapes like Cabernet Sauvignon, Merlot or Cabernet Franc. The vineyard use a lot of old vines in their premium wines for lots of flavour and what I call a ‘winter night by a log fire’ style. 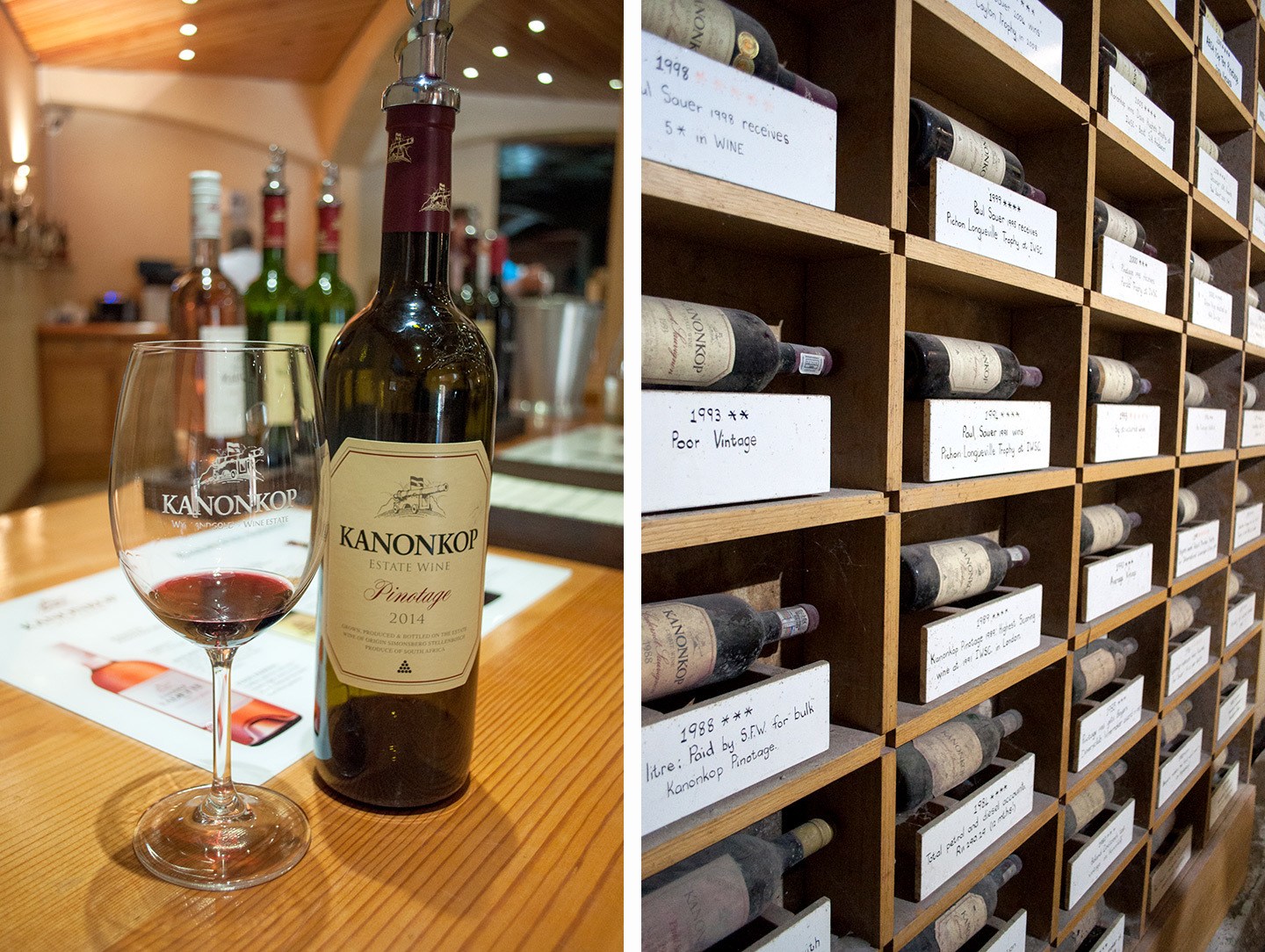 A wine from every year at Kanonkop

Three wineries and 13 wines down, it was time to change regions (as well as drink some water and eat some food to get us through to the end of the day). Nearby Franschhoek – aka ‘French corner’ – gets its wine traditions from the French rather than the Dutch, thanks to Huguenot refugees fleeing persecution who settled in the area in the 1680s and brought their skills and seedlings with them. You still see lots of French names around and the town celebrates Bastille Day every year. It’s a pretty place with whitewashed Cape Dutch houses, cosy B&Bs and great restaurants where I could definitely see myself going back to for a few days. There’s even a wine tram that connects a few of the vineyards so you don’t need a car. 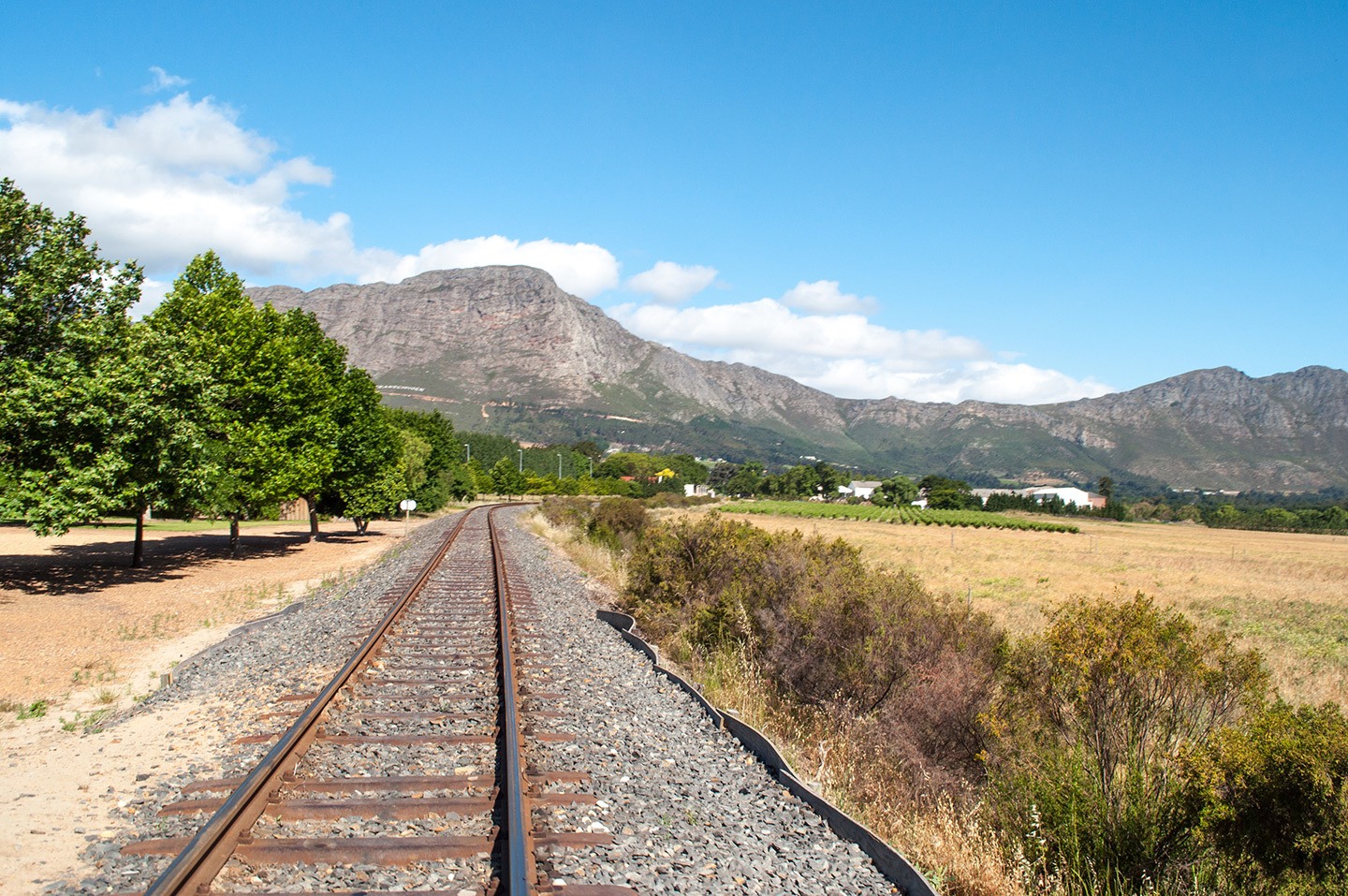 The climate’s warmer and drier in Franschhoek than in Stellenbosch, so even though they’re only half an hour away the wines are different, with more Syrah/Shiraz and Mourvedre. But before we got back into the tasting, it was time for lunch at Lust bistro, part of the Vrede en Lust Estate. Franschhoek has some of South Africa’s best food but, like everywhere else we visited, this place was totally unpretentious. We ate outside on the patio in the sunshine, tucking into pizzas, a springbok salad and lamb burger. Each item on the menu has a suggested wine from their vineyard to go with it (but I was more in need of a jug of water!). 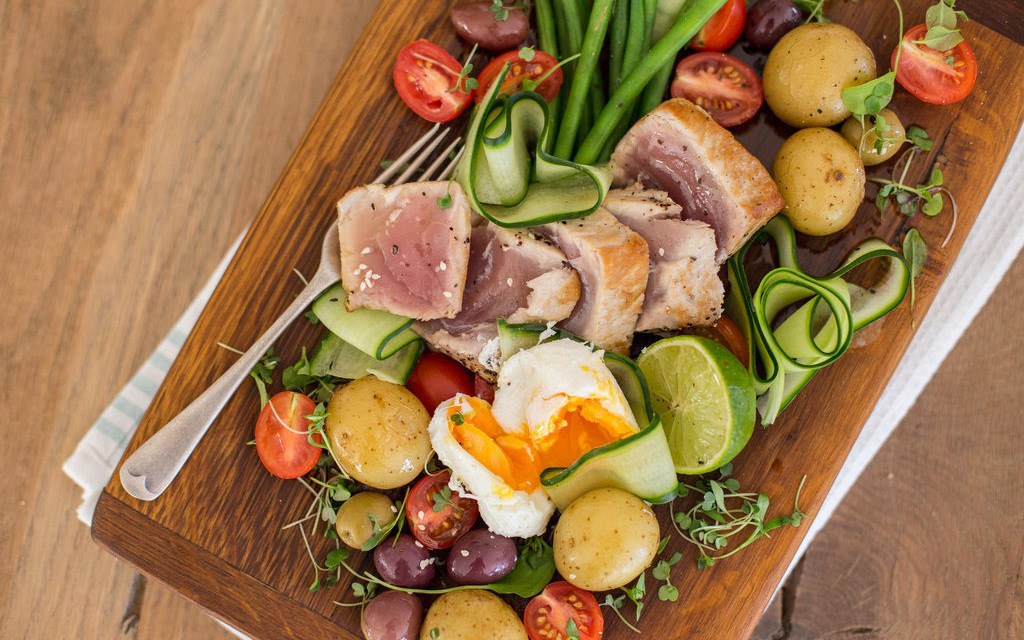 Food at Lust (photo credit Lust Bistro as I was too hungry to remember to take any!)

Our final winery of the day was Moreson, who specialise in Chardonnay. Like a lot of vineyards in the Cape Winelands, Moreson is family-owned and run – even the family dog gets a look in, with a range of wines called Miss Molly after her which raise money for animal charities. I’m not the biggest fan of Chardonnay but it was interesting to try their different varieties. The same grape can make a totally different wine if it’s treated differently – from the unwooded, crisp Dr Reason Why to the honeyed, aged Mercator Premium Chardonnay. Though I’ll admit by this time my tasting notes were getting less coherent and the drive back was a bit of a snooze-fest. But I came away with some great recommendations, a better knowledge of what South African wine is all about, and a few new varieties to add to my favourites list. 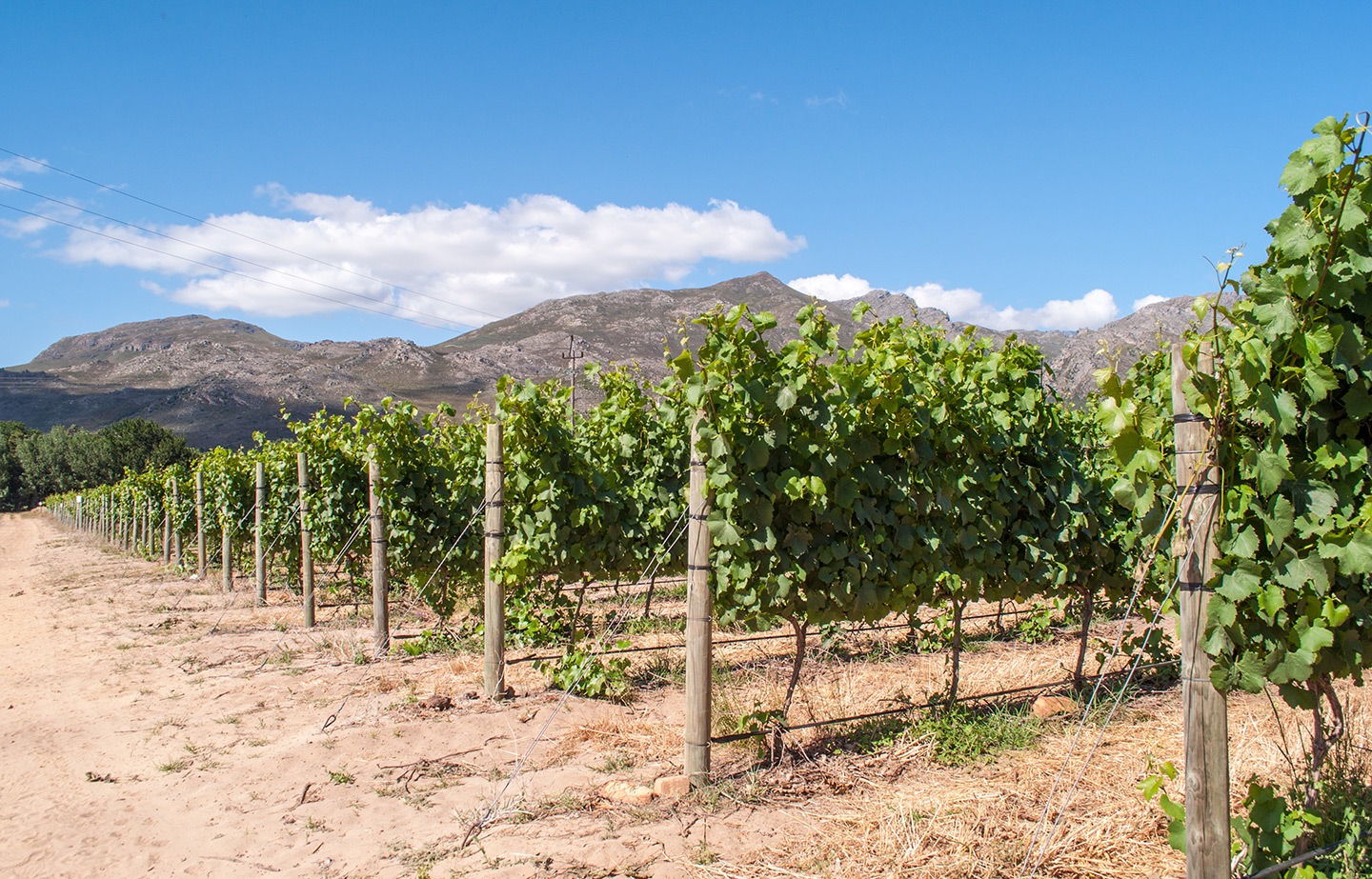 We took the Luhambo Tours Stellenbosch/Franschhoek Winelands Tour. It costs 995 ZAR/£58 per person (or less if there’s more than five of you) and runs from 9am to 5.30pm. The minimum is only two people, so we ended with our own tour. Prices include pick ups from your hotel but lunch is extra. 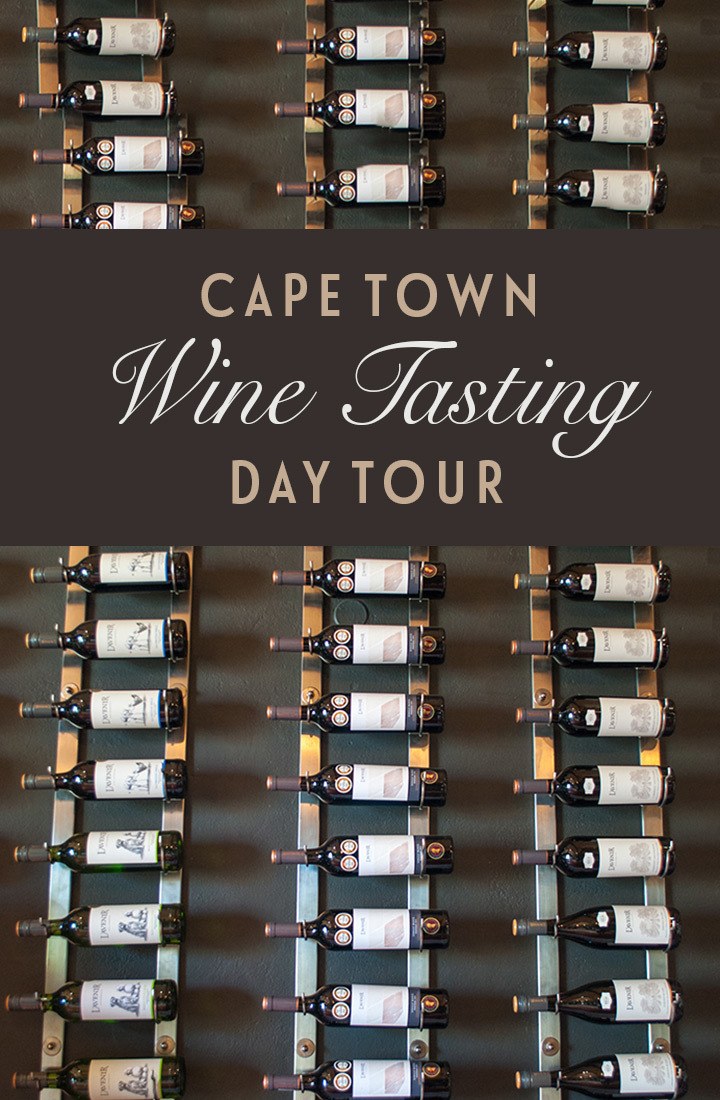 Cheese and wine are a pretty perfect combination I didn’t know much about wine until i visted afriend a year ago but really got into it and love visiting wine regions (though I still don’t come across many wines that I don’t like!).

Haha yes me too! Wine and cheese is pretty much heaven for me.

looks amazing Lucy. We are staying in Camps Bay in a few weeks and looking to take a day in the wine farms. We are only in CT for 8 nights before flying to Joberg . Would you recommend the guided tour and did this give you the opportunity to go on the tram in Franschoek? Debating whether to Uber it or do a private tour

I really enjoyed the guided tour and felt like it helped in picking some good places to visit as there are so many options. We didn't get chance to do the tram though which would've been great – one for next time!

Absolutely LOVE the food at Lust. Their pizza has a bit of cumin in the base and they use slightly smoked mozzarella I think. To die for.

The food was so good! My husband went for the pizza and it looked amazing.

The wine tour sounds a great idea - I've visited a few vineyards in Stellenbosch and Franschoek and don't think I've had a bad glass. But it is hard to know where to start sometimes!

It is – there are so many options! Both Stellenbosch and Franschoek were lovely and I'd happily go back and spend a few days in either (and try a few more wines!).

Mmm. Yes please. My husband would love it. More please!

Can't go wrong with a good glass of wine (or two!)