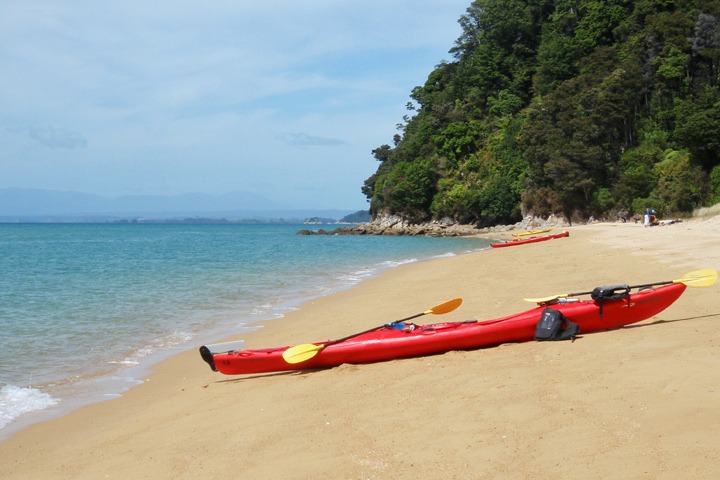 At the northern tip of the South Island, Abel Tasman is the smallest of New Zealand’s National Parks. It may not be big but it’s perfectly formed, with golden sandy beaches and a bright blue sea fringed by a dense forest full of bird life. You can explore the National Park by land on the Abel Tasman Coastal Path, a 32-mile walking track that follows the coastline and is one of New Zealand’s ‘Great Walks’. But one of the best ways to see it is from out on the water, on a sea kayaking trip.

Now I’m not a complete kayaking novice, having once spent three days canoeing down the Ord River near Kununurra in north Western Australia. Though that was a river and we got a helping hand from the current, whereas this was the sea, and my only previous sea kayaking experience involved getting shouted at by a despairing guide as we floundered around, incapable of going in a straight line. But my fellow kayakers were an experienced bunch and the idea of a leisurely guided tour was rejected in favour of the more adventurous self-guided trip, where we could make up our own route. 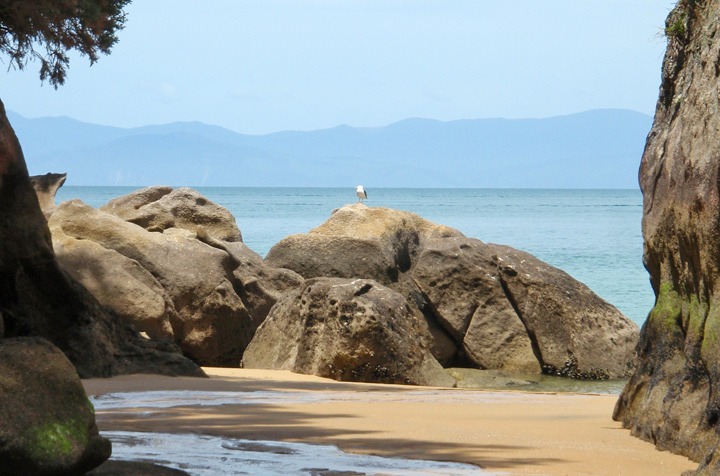 Rock formations on the beach

We gathered in the kayak hire office in Marahau early in the morning for a safety briefing and to pick up our kayaks, life jackets and kit. A hour and a half later having had to practice capsizing and learn how to escape if we got stuck upside down, I was starting to wonder if this was a good idea. And that’s before the instructor mentioned the ‘Mad Mile’ – a rough patch of sea where a combination of rocks, currents and a lack of shelter make it the most dangerous stretch. With the wind direction today not in our favour, we were warned only to tackle it if the weather looked better and we were sure we could get by safely. 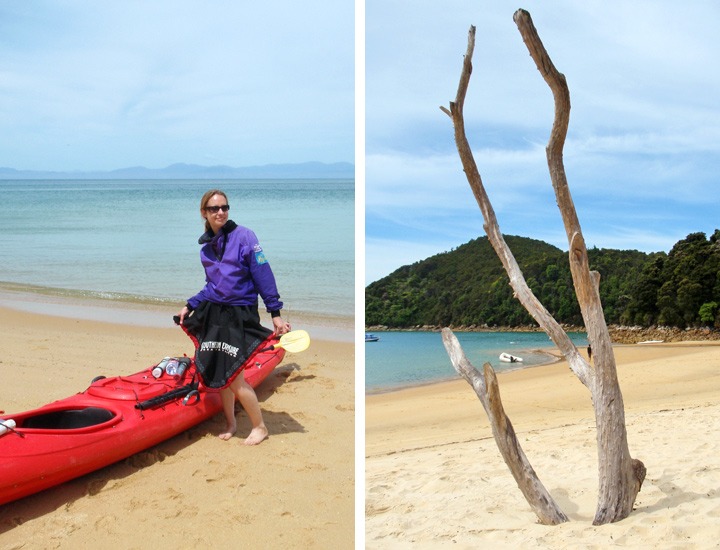 My fetching spray deck and driftwood sculpture on the beach

As we walked down to the shore the wind suddenly hit us. The weather might have looked beautifully sunny but it had a bit of a kick, and the waves were picking up. We loaded up, strapped in and were pushed out into the water – and almost immediately broke the kayaking rules. We’d been told to face the waves head on not sideways, but as the wind pushed us around and the waves started slamming into the side of the kayak, we turned around and started wobbling ominously. We dug the paddles in to change direction and with a bit of help from one of the instructors directing the tail of our kayak we managed to make it out of the surf. I was already exhausted, and this was only the first five minutes. 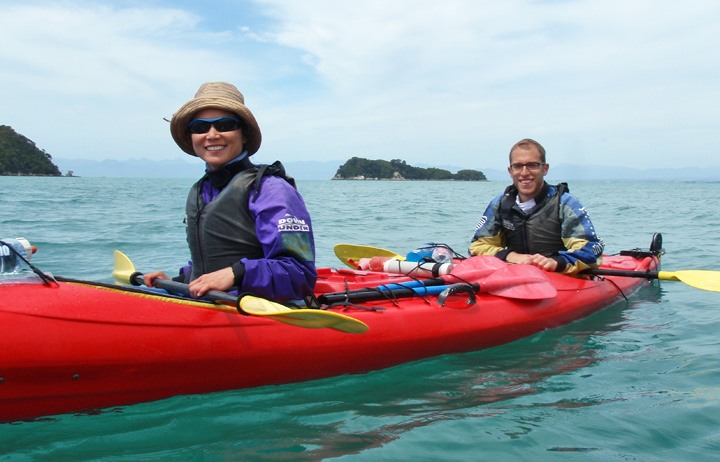 Preparing to tackle the Mad Mile

But after about 20 minutes paddling we began to get into a rhythm. As we rounded the corner into the next bay the wind died down and we could relax, taking photos and enjoying the views. The coastline is dotted with golden bays, some big with campsites, some tiny and empty but for the seagulls. The good thing about the self-guided trip was that we could stop whenever we spotted a interesting looking rock formation or a deserted cove. We found the perfect patch of empty beach and ate lunch on the sand. But after being out of the water for a while it started to get cold – the Caribbean colour of the beaches wasn’t matched by the temperatures – so we headed off again. It was time for the Mad Mile. 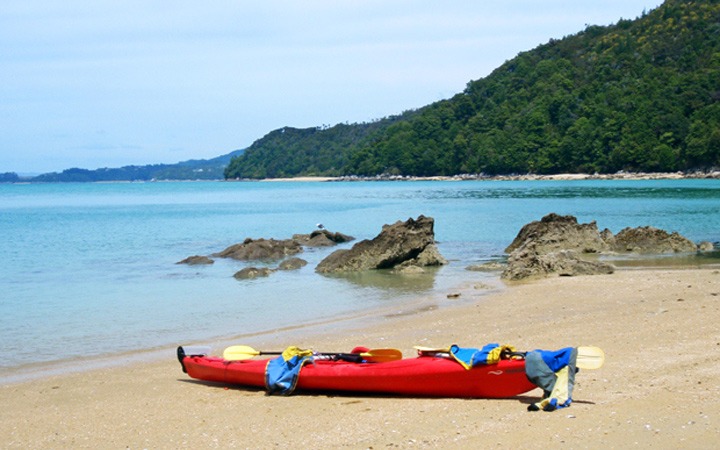 After its fearsome reputation had preceded it, the reality was thankfully a bit more tame. The winds had died down by now so we could pick our way slowly between its jagged rocks, using up the last of my strength to navigate through safely. As we pulled up onto the sand of our final stop at Anchorage and got out onto the beach, I was almost wishing we were carrying on along the coast on one of the longer trips. That was until I tried to pull the kayak up the beach and my sore muscles started crying out for a bath and a cold beer, and the approaching water taxi couldn’t have been a more welcome site.

We rented our kayaks from Abel Tasman Freedom Kayaks in Marahau. It costs $65 NZD (about £33) to hire a two-seater kayak for the day, plus $33 NZD each for the water taxi back if you only want (or have the energy to) kayak one way. If you’re not a confident kayaker you can also take a guided tour, from $130 NZD for a half-day (including water taxi one way) or there are longer trips lasting from one to five days. 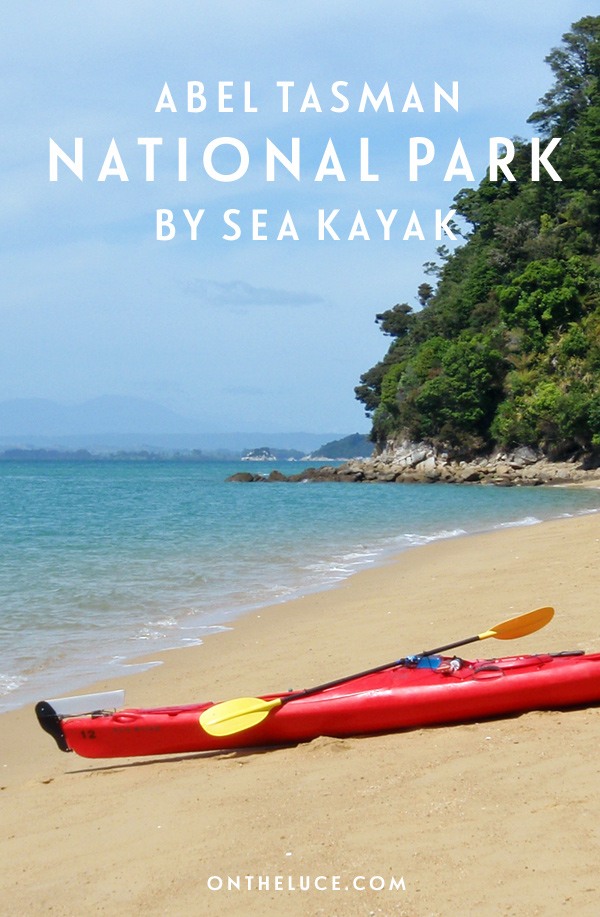 Gorgeous hiking area and stunning views. Do use the water taxis to get from place to place. Be careful, there are lots of sandflies on the bDon Schuldeseaches.

I loved this part of NZ! Many people come here and do the coastal walk since its one of the Great Walks, but really the best way to see this park is by kayak.

It's a beautiful area, and really interesting to explore by kayak too – I didn't get chance to do much walking there but would like to see it from a different perspective one day.

Kayaking in Abel Tasman is one of my fondest memories of my trip to NZ. Such a beautiful area. Did you go to any of the wineries nearby?

It's such a great place! We didn't make it to any wineries in that area but did a few in Marlborough and the Hawkes Bay area, love a good NZ wine!

Aahh it's always more adventurous when you go off on your own as opposed to a guide! Im a little disappointed I totally missed out on Abel Tasman when I went to NZ! It was more of a "week- long layover" from Australia before I headed back home. I did meet a lot of people coming from Antartica just finishing up their work down there for the summer, and I couldn't stop asking them all about it.

There's so much to see in New Zealand it's hard to choose if you've only got a short time – all the more reason for another visit though!

How exciting, and what a wonderful way to see the area. Love the sunny shots, buoying me up on yet another cold, wet day.

Tell me about it, I can't believe how awful the summer has been here this year. I'm having to relive my New Zealand trip to remind me what it was like to see the sun!