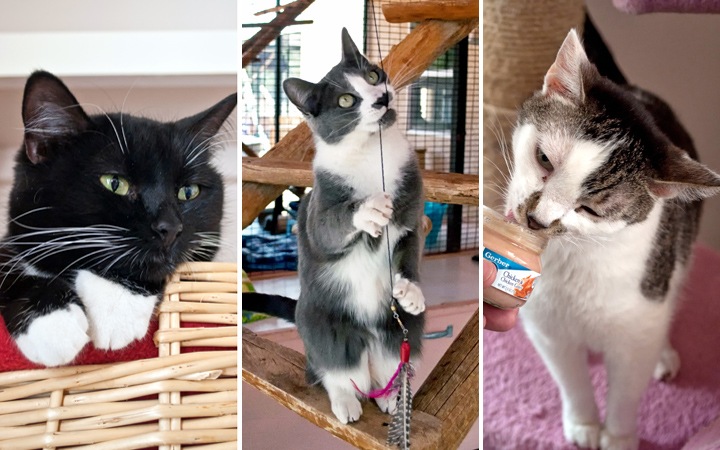 My family have always had cats, but with moving around and living in rental properties until recently I’ve not been able to have my own. But any chance I get to spend some time with them I do – so the opportunity to spend an afternoon with 700 wasn’t to be missed. Located outside Kanab in Utah, Best Friends Animal Society runs the biggest no-kill animal sanctuary in the US. Around 1700 animals live there at any one time – some are ill or have been badly treated, others have been abandoned. The sanctuary looks after them until they are adopted, or gives them a safe place to live for the rest of their lives if they can’t be rehomed. They have in-house vets to treat them, behaviouralists to sort out problems, and an army of volunteers to socialise them and generally give them a bit of love. Which is where we came in. 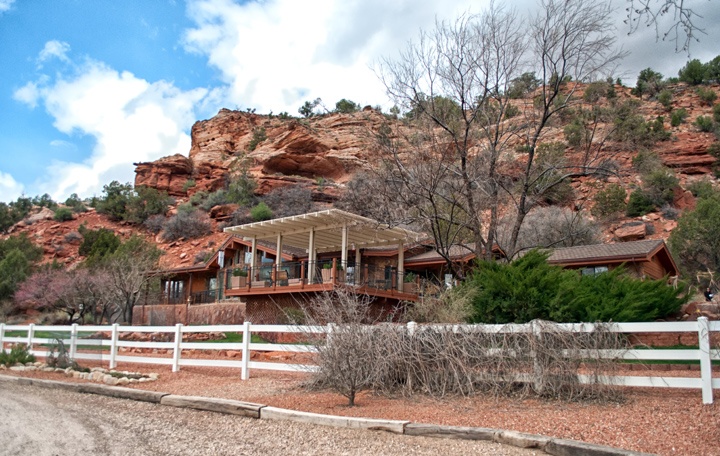 Visitors can volunteer at Best Friends for as little as half a day and choose which animals they want to spend time with. We signed up to spend an afternoon in their Cat World after a tour around the sanctuary in the morning. These tours take about an hour and a half and run four times a day, and you can go on them even if you’re not volunteering. Best Friends own a huge piece of land which stretches over 3700 acres, surrounded by gorgeous red rock landscapes.

The site’s known as Angel Canyon and has separate areas for rescued dogs, cats, horses, pigs, rabbits and birds, as well as a visitor centre, staff canteen and accommodation block. It’s practically a whole town built around the animals. There’s even a pet cemetery where the animals who’ve died at the sanctuary are laid to rest. We bumped around the rocky roads past the different animal houses – there’s so much space out here there’s plenty of room for the sanctuary to spread out. 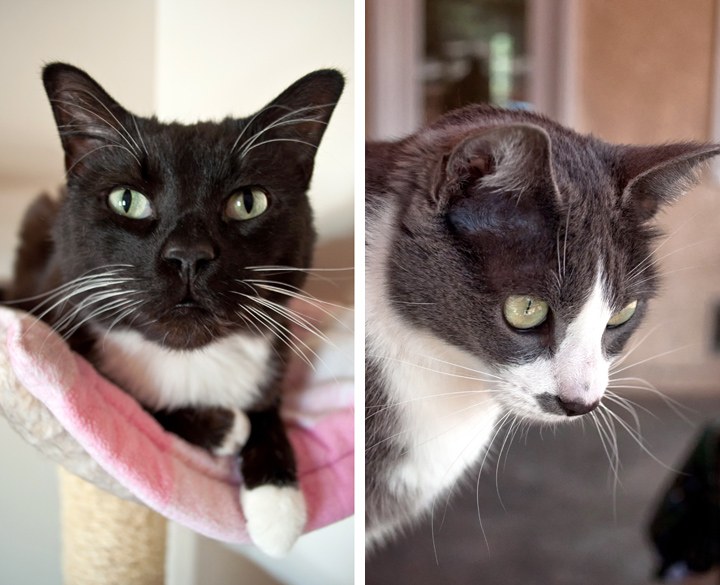 Our first stop was Dogtown. This is the most famous section of the sanctuary as it’s been featured on a TV series of the same name in the US. One couple on our tour had come all the way from Puerto Rico to volunteer for a few days because they were such huge fans of the show.

The dogs are split into groups for different sizes, with sections for puppies, small and medium-sized dogs. But the majority of the dogs here are larger ones who’ve been abandoned after they’ve outgrown their homes. They are all marked with collars to show if they are safe for volunteers or should be handled by staff only. We met one of the shyer residents who was getting socialised so she could find a new home. From Dogtown we got a preview of Cat World before circling back to the visitors centre.

One of the lovely cats up for rehoming

After lunch it was on to Cat World. There are all sorts of jobs for volunteers – from helping with feeding to cleaning up – but a lot of the time they need people to socialise the cats. So to play with them, stroke them, get them used to being around different people. We were handed a jar of baby food (which smelt gross but the cats seemed to love it) and let loose in the pens. The cats are divided up into groups of 12 or so in a big pen with outdoor and indoor areas and we moved between different pens, meeting the cats. There were so many gorgeous animals it’s heartbreaking that they don’t have homes.

We also got to have the bizarre experience of taking a cat for a walk on a lead. My family cats would’ve had none of it, but some of the cats here loved it. We took Oliver out – he’s an older cat taken in by the sanctuary who’d lived in a vet’s office all his life. He’d been used as a donor for blood transfusions for cats the vet was treating and had never been outside. Because he’s a bit older he’s less likely to be rehomed, but seemed to be onto pretty good life here, alternating between sleeping, sunbathing and the odd walk. Best Friends do a great job in providing homes for animals like him that might never get adopted. 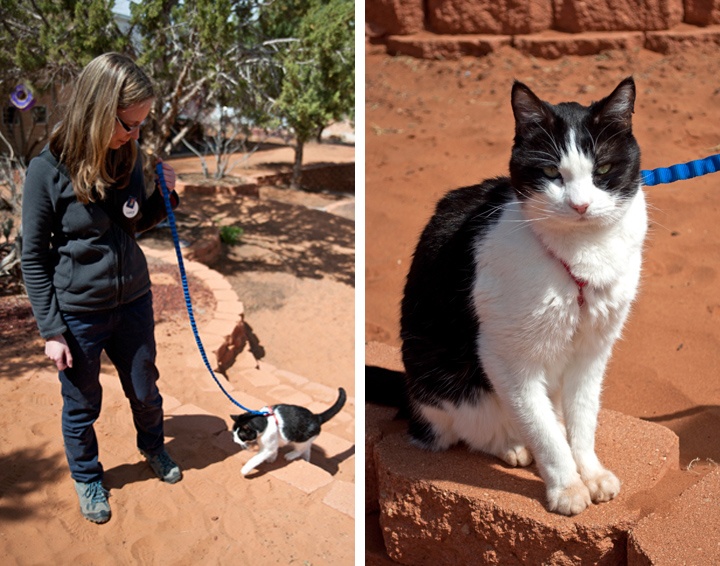 Taking Oliver for a walk

Update: After posting this I had a comment from a reader who had also volunteered at Best Friends and ended up falling in love with Oliver and adopting him and taking him back to New York – such great news!

I could’ve spent days there but even an afternoon was enough to be inspired by the place. Hundreds of cats get adopted from Cat World each year, and if I hadn’t been going back to the UK there were about ten I’d have wanted to take home with me (sure I had room in my bag for at least one…). Back home though it made us think about finally getting our own cats and we how have two from a local rescue centre coming to live with us today. So I may be walking a cat on the streets of Cheltenham soon! 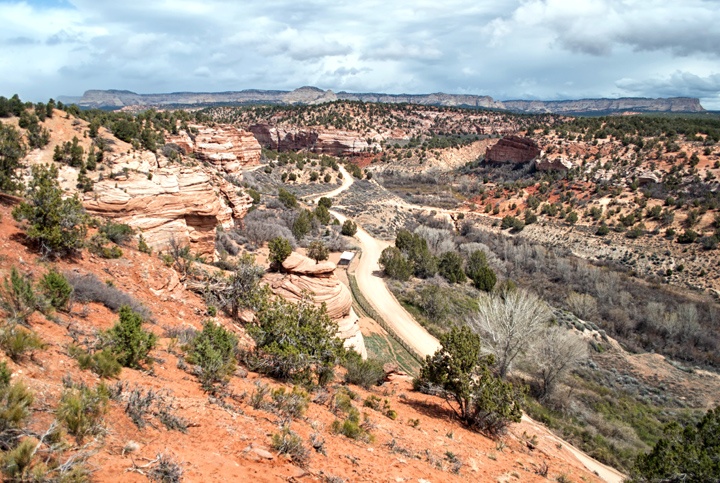 Best Friends is just north of the town of Kanab in Utah. You can volunteer at the sanctuary for a minimum of one half-day. It gets very popular (especially for the smaller sections like the horses or pigs) so you need to book well in advance. They have some on-site visitor accommodation where volunteers can take a dog, cat or even a pig to stay the night with them. It does get very booked up though, but there are several motels in Kanab which will also let you have the sanctuary’s dogs stay overnight with you. If you don’t have time to volunteer it’s still worth taking the free tour around the sanctuary. 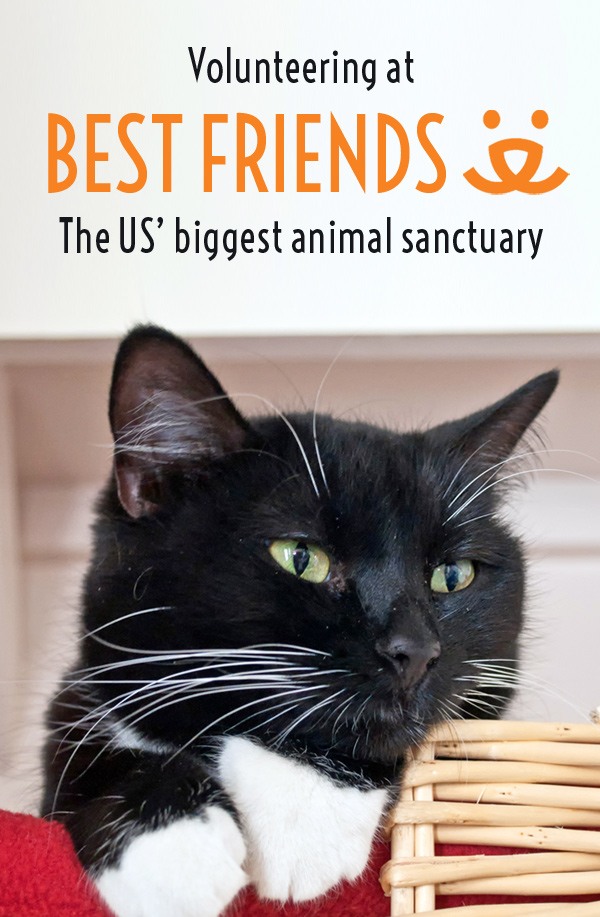 I love this addition to your road trip plans, I'm planning a similar road trip and I'd never heard of it before but this is most definitely being added to the top of the list! What a wonderful way to spend a day, it adds such a loving relaxation day to your trip. Thank you for the itinerary tips!!!

It was such a fabulous day – one of my best memories and a real contrast from the rest of the trip!

Lucy, I'm browsing your posts about Utah because we are planning a trip out there next month. We were already planning a stop in Kanab to visit Best Friends, but I didn't know you could do doggie sleepovers! Such a wonderful idea, to help them get used to being in a home. And thanks for the reminder to apply early--the trip is next month, so I'll submit my application right now!

Loved Best Friends (and the rest of Utah!) – such an inspiring place, and so lovely that you can borrow a dog for the night! Hope you enjoy your trip.

My 13 year old son and I volunteered this past March and worked with the cats, dogs and pigs. I wanted to tell you that we adopted Oliver! Like you, we took him on a walk and then invited him for three sleepovers while we were there. We did not bring him home to NYC right away, as we have three cats and I volunteer with a cat rescue group so it seemed silly to import a cat. However, we could not stop thinking about him, so he was sent by plane in May. We love him!

That's such great news Lisa! Thanks for letting me know. He was such a lovely and sweet-natured cat, it's so nice to hear that he's ended up in a loving home. Hope he's enjoying a few walks around New York!

What a wonderful place! More of these are certainly needed. I've lived in areas of South America where there are no organizations to help animals, and the suffering resulting from that is heartbreaking. Thanks for sharing this.

It was such an inspiring place to visit, I wish everywhere had access to such a well-run and organised animal sanctuary.

I love cats!! Love this photoset :)

If you love cats you would be in heaven here – I've never seen so many in one place!