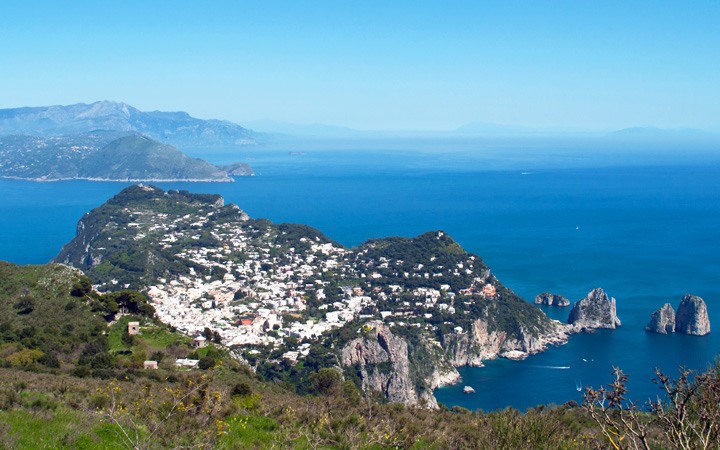 Towering over the village of Anacapri is the peak of Monte Solaro. At 589 meters above sea level, the mountain is the highest point on Capri and the best place for views across the island and far beyond – weather permitting. With one of Monte Solaro’s nicknames being Acchiappanuvole (cloud catcher), you are lucky if you get a clear view. The temperature difference between the sea and the rocks makes the warmer sea air condense into a thick blanket of fog, and in the mornings and afternoons you often can’t see the summit at all. But on a beautiful spring day, the sky was clear and the mountain was calling. And as I’ve always had a fondness for climbing to the top of tall things for a view from above, I couldn’t resist it. 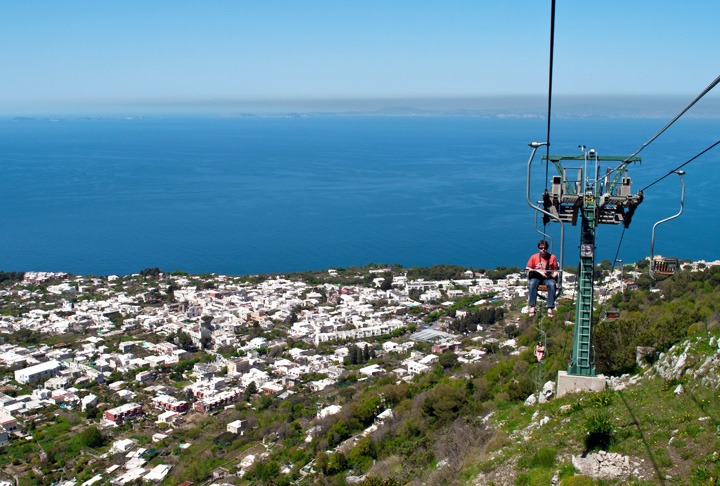 I’d read that there was a chairlift – or seggiovia – which carried passengers from Anacapri town to the top of Monte Solaro, which sounded like a much better idea than the two kilometre walk uphill to the summit. I have to admit that when I heard chairlift, I was expecting something a bit more, well, substantial. But instead there are little individual open wooden seats that you jump on and off while they keep moving.

The chairs carry you up above the rooftops of Anacapri’s houses and over terraced gardens and orchards towards the summit. Although you’re never too far off the ground, you might want to avoid it if you don’t like heights, and make sure you hold on tight to your flip flops and camera bags. But riding up on your own gives you chance to soak up the views across Anacapri and out into the bay with just the sound of the chairlift whirring and the birds chirping to keep you company. 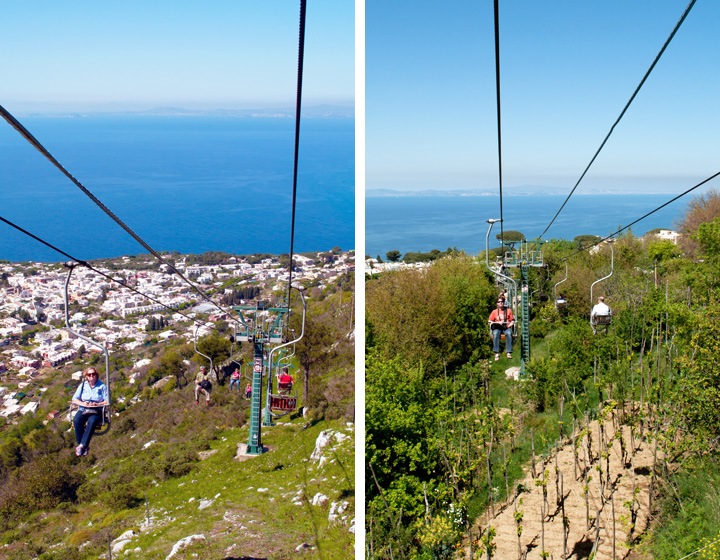 On the (not very high-tech) Monte Solaro chairlift

Emerging at the the top, the wind hits you first and the views a close second. Looking around in a 360º panorama you can see the whitewashed houses which cover the hillsides of Capri Town, the three rock stacks called the Faraglioni lying off the coast, and on out to the Sorrento Peninsula, the Bay of Naples and the islands of Ischia and Procida. The scenery is packed with dramatic rock faces dipping away into the sea, along with wind-battered trees and scattered wildflowers. And surrounding it all are the many shades of blue from the sea and sky. Pathways lead in all directions so you can appreciate the view from every angle, and you might also come across the ruined 18th-century fort, the Fortino di Bruto. 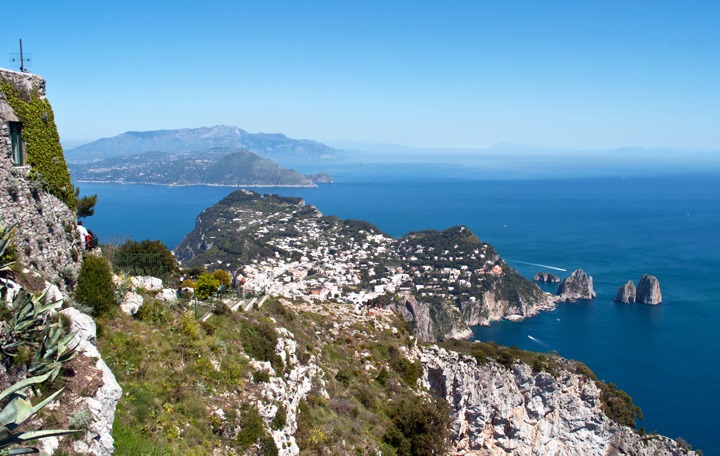 Panoramic views across Capri from the summit of Monte Solaro

It’s not all ruins up here though. In the 1950s a holiday complex called the Canzone del Cielo was built at the summit, where visitors could swim or relax in the solarium while enjoying the views. It’s closed down now unfortunately, but their old American Bar has been converted into a terrace café/bar. You can find a spot to relax in a deckchair with an ice cream – or even better a glass of prosecco – have a picnic under the trees, or just lie back and soak up those awe-inspiring views. 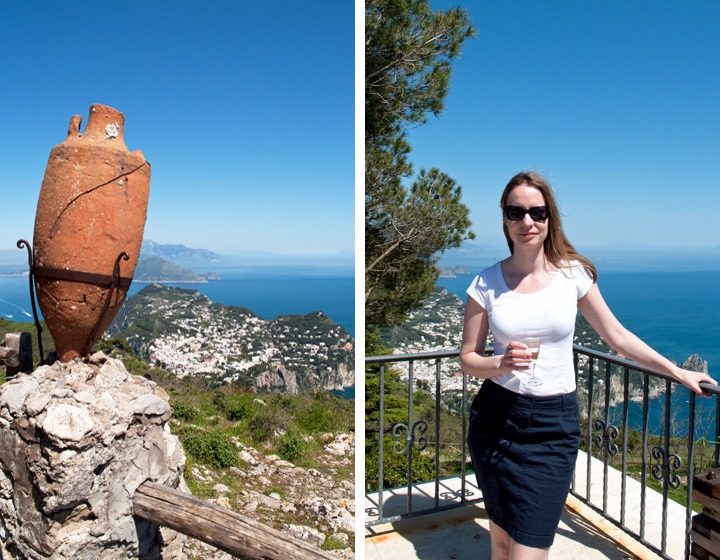 Prosecco with a view on the Canzone del Cielo bar terrace

The chairlift from Anacapri to the top of Monte Solaro leaves from near Piazza Vittoria, where buses from Capri Town and Marina Grande port arrive. It runs from 9.30am to 3.30pm November–February, 4pm March–April and 5pm May–October. It costs €7,50 one way or €10 for a return and takes 13 minutes each way. Or if you’re more energetic – or don’t like the look of the chairlift – then there is a walking path leading to the summit which takes about a hour to walk. 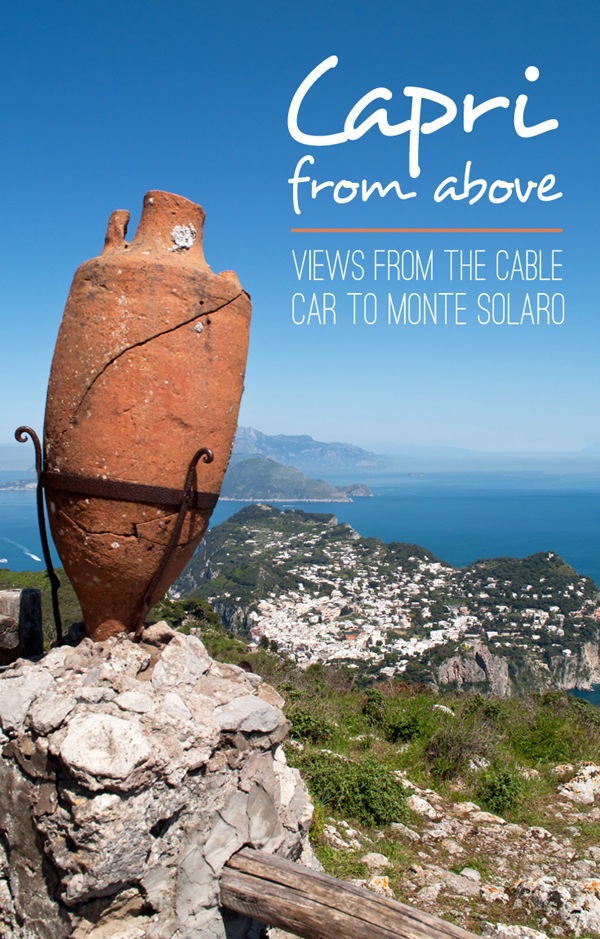 Hi Lucy, Capri is really wonderful and your pictures look beautiful. Anyway if you want spent a nice week in Italy you have to go to Elba island, I've just come back from there, keep an eye on my blog to see how beautiful it is. Bye Bea

Thanks Bea, I love Italy so always looking for new places to visit so will be sure to check out Elba Island.

I think it's a little scary when you're on the chairlift, but it's very worthwhile for the views! Nice post :)

It didn't feel the most substantial so I was glad that it never went too far off the ground! Well worth it for the views at the top though as you say.

Beautiful photos! I can't believe how blue the water is.

I know! With the sea and the sky it was shades of blue all around.

That was great! I'm at work yet I feel like I just took a mini-vacation. Thank you for sharing.

Thanks – it was a really relaxing place to sit back and soak up the scenery.

Spectacular. Nothing more can be said.

Thank you – it's a really beautiful part of the world.