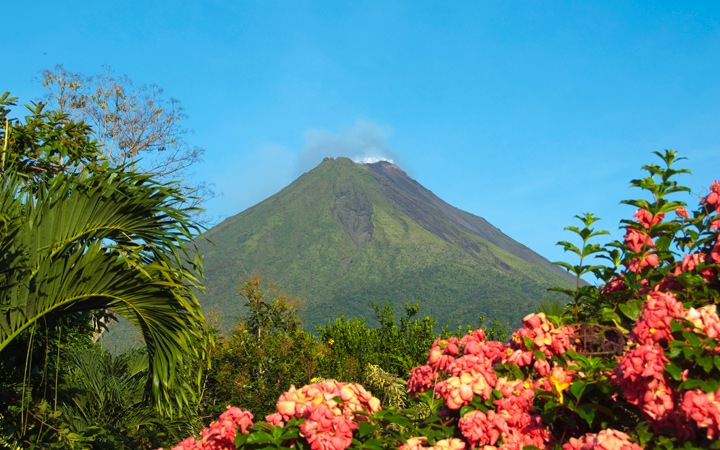 One of Costa Rica’s most famous sights, how hard can it be to spot a volcano that’s 1600 metres high and has a 140-metre-wide crater when you’re only a few miles away from it? Well, a lot harder than you’d think. A perfect cone-shaped peak – or so I’m told – Volcan Arenal towers over the nearby town of La Fortuna. But local weather conditions mean that the top is often totally covered by clouds, and its not unusual to go your whole visit without ever seeing the summit, as I found out on my trip there.

Volcan Arenal was dormant for hundreds of years until 1968 when a major eruption started off a series of explosions, lava flows and ash clouds which carried on for the next 50 years. For a while it was one of the most active volcanoes in the world, but recently it has become much calmer, though I did still feel a few earth tremors. But the days when you could watch the lava flowing down the side of the volcano practically every night from your hotel room seem to be over for now though (thanks to Justin Jensen on Flickr for the photo above showing what it is actually supposed to look like minus the clouds).

So if you can’t see the volcano, what else is there to do in the area? 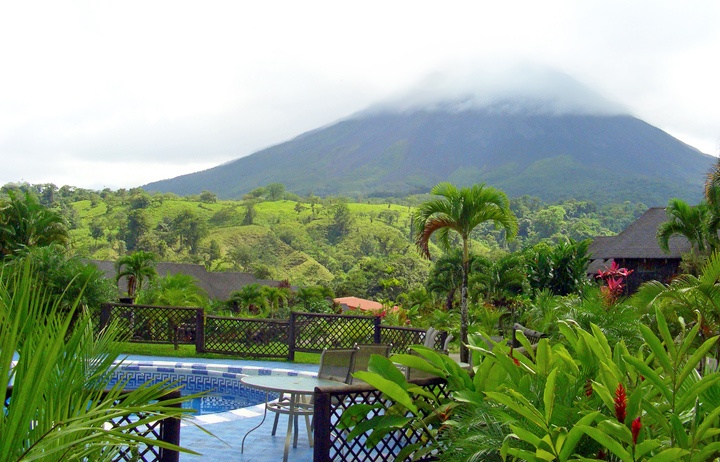 Volcan Arenal (well the bottom half of it at least)

Take the Sky Tram and zip line down

Although the most popular place to go zip lining is in Monteverde Cloud Forest, there’s a site 45 minutes outside La Fortuna where you can give it a go. The Sky Tram gondola takes you up through the rainforest to an observation deck at 1000 metres which overlooks the volcano and Lake Arenal. Then you can choose whether to go back the same way or zip line down along 11 different cables stretching over two miles.

The Sky Tram gondola costs $44 per person or you can get a package with Sky Trek zip lining for $77.

The 70-metre high La Fortuna Waterfall lies a few miles outside the town, and one of the best ways to get there is by horseback. The trip starts off with an hour-long ride through pasture and forest before you leave your horse. From there you head across a rope bridge and clamber down to the waterfall’s pools, where you can swim (remember to pack a towel as it’s an uncomfortably damp ride back otherwise).

A four-hour horse-riding tour to the La Fortuna Waterfall costs around $60 per person. 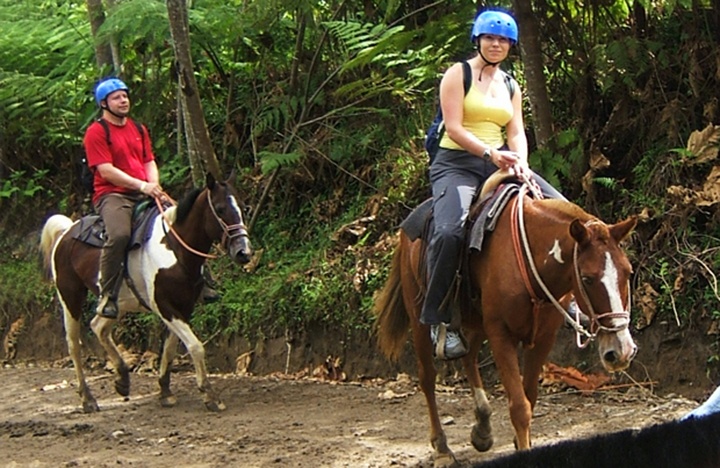 Canyoning and rappelling through waterfalls

If that all sounds a bit sedate, you can get closer to the waterfalls by taking a canyoning and rappelling tour. After a 30-minute 4×4 drive out into the rainforest, you get kitted up with a harness, helmet and gloves and start rappelling and climbing down the first of four waterfalls. This is the tallest at 165m, and afterwards there are three other decents and a trek along the base of the canyon.

Pure Trek Canyoning run a four-hour tour twice a day for $101 per person, including lunch and pick up.

Or just soak in the hot springs

A useful by-product of the area’s volcanic activity is its hot spring waters. There are a few spa complexes in the area around La Fortuna, including the Baldi Hot Springs. Here there are 30 different pools amongst the rainforest where you can you soak in water ranging from a cool 35 to a toasty 65°C. It’s a relaxing place to soak away any aches and pains after horse-riding or canyoning, with a swim up bar if you’re in need of stronger painkilling, and a prime view of that elusive volcano if you get really lucky. 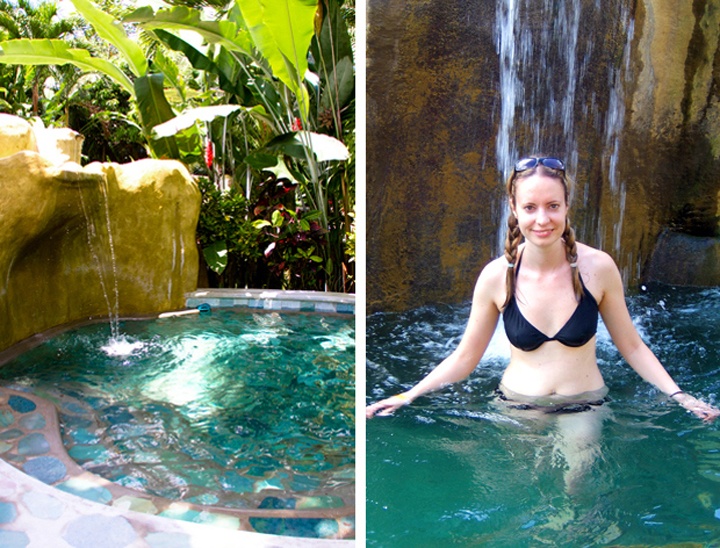 In the Baldi Hot Springs 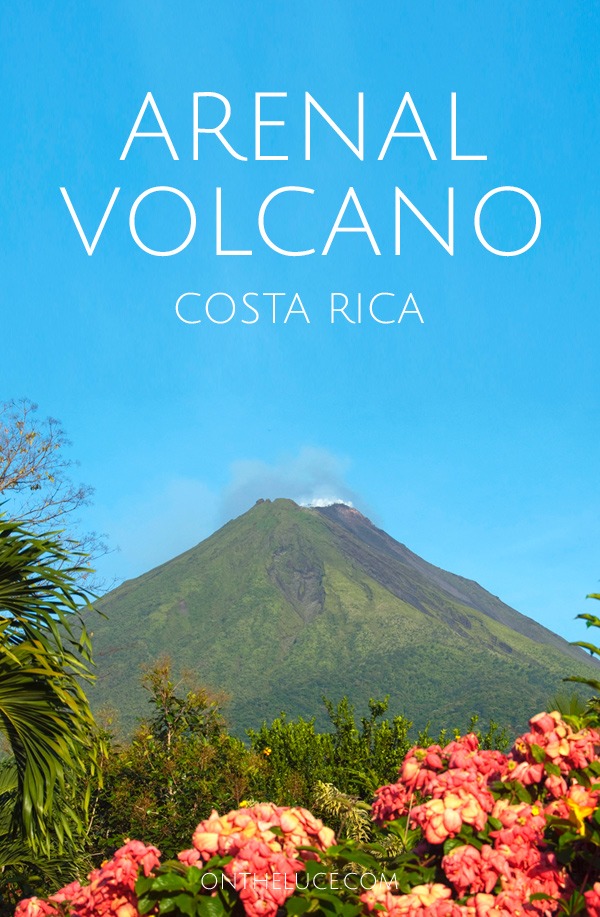 Costa Rica has been on my bucket list for a while. Did you feel like it was worthwhile to visit both the Arenal area and the Montverde Cloud forest, or did you feel that they were a little redundant? I have seen varying opinions around the web about this and I am trying to sort out fact from fiction...

Hi Shanna, I think it was worth visiting the both, though the volcano being active then was a draw to go to Arenal. There's enough to do in both not to be bored, with the spas and activities around Arenal and the wildlife in Monteverde. Though you could do a day trip between the two if you were pushed for time, the journey is about 2.5 hours each way.

Looks like a great place to visit. My brother used to spend his winters in Costa Rica and loved it! It is on my list. Thanks for sharing the great pictures and thanks for following my blog.

Thanks Darlene, it's an amazing country – and a great place to avoid winter I'm sure! I found your site through Alison at See My Travels and look forward to reading more!

The more I read about Costa Rica on your blog, the more determined I am to go!

Thanks for reblogging and the volcano info, it must've been amazing to see it while it was still erupting.

Can't be lucky with the weather the whole time I suppose, but would've been nice to see it! I really liked the horse riding but my friend had never really ridden before and was a bit nervous, and the guide making her horse canter across some roungh ground probably didn't help much!