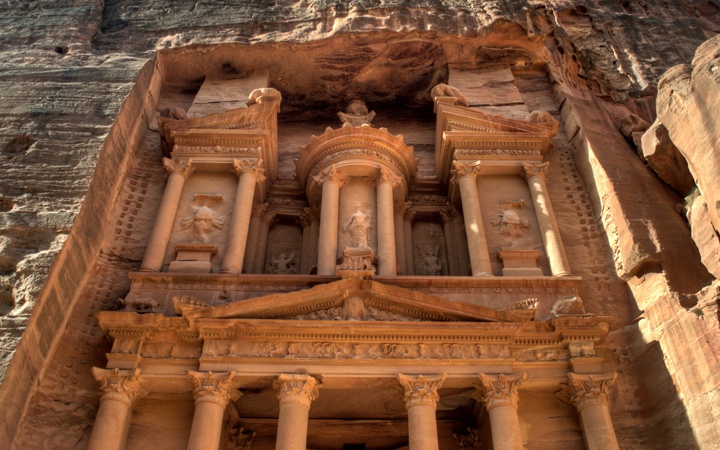 The ‘rose-red city half as old as time’, Petra is Jordan’s most famous tourist attraction. It’s one of those places you almost feel that you know before you get there, having seen it in so many photos and films. This mysterious city has been capturing people’s imaginations for hundreds of years. It was built by the Nabateans back in the fourth century BC. Normally a nomadic people, they had amazingly advanced skills in architecture and irrigation and built a spectacular city at Petra, a prime spot on their trade route between Rome and China. But it started to decline after being taken over by the Romans, and by the 12th century the site was abandoned and forgotten about by the rest of the world until it was rediscovered by Swiss explorer Johann Ludwig Burckhardt in 1812. You can still follow the same route as Burckhardt took back then as you come into Petra to its most famous rock temple – the Treasury. 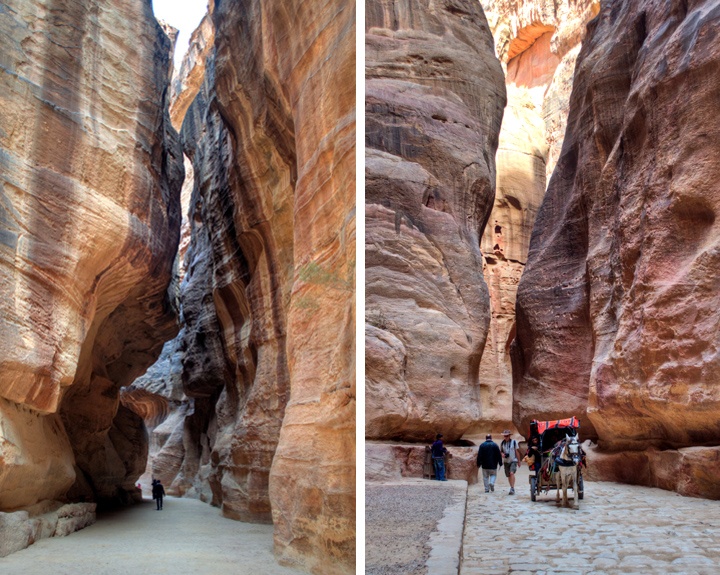 The pathway through the Siq

The mile-long pathway to the Treasury winds its way through a gorge called the Siq. The name al-Siq means ‘the shaft’ and you can see where it gets its name, as shafts of light filter down onto the dark pathway below. At times the gorge is only about three metres wide and the rocks above can be up to 180 metres high above you. The Siq was formed as tectonic movement pulled the rocks apart, and over the years water has rubbed the surfaces smooth into sinuous curves of orangey-pink rock. It’s a quiet walk along the pathway, interrupted by the occasional horse and cart, and the air of anticipation starts to build as you get closer to the Treasury. As you go around each corner you keep expecting it to appear in front of you. A mile doesn’t sound that far but it feels a lot longer as you keep walking onwards. 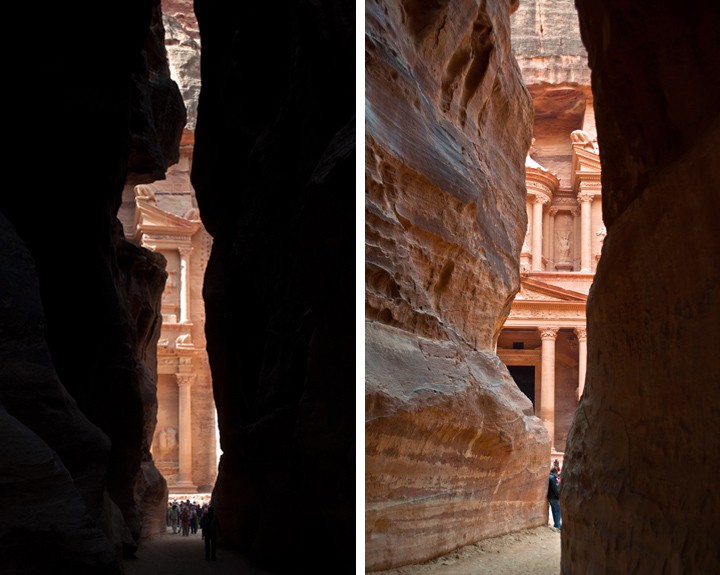 First glimpses of the Treasury through the Siq

And suddenly the sound of voices and the flashes of cameras announce that you’ve finally arrived. The first glimpses of the Treasury are from between the narrow walls of the gorge, where it emerges out of the darkness. First thing in the morning it’s illuminated by bright sunlight, and in the afternoons it glows orange as the sunset is reflected onto the rock. You come out into a mixture of people milling around – tour groups snaking after their guides, tourists posing for photos, Bedouins and their camels. But if you look beyond the crowds and upwards, they all disappear and you can almost imagine what it must have been like for the first visitors coming into Petra after it had been lost for so many years. 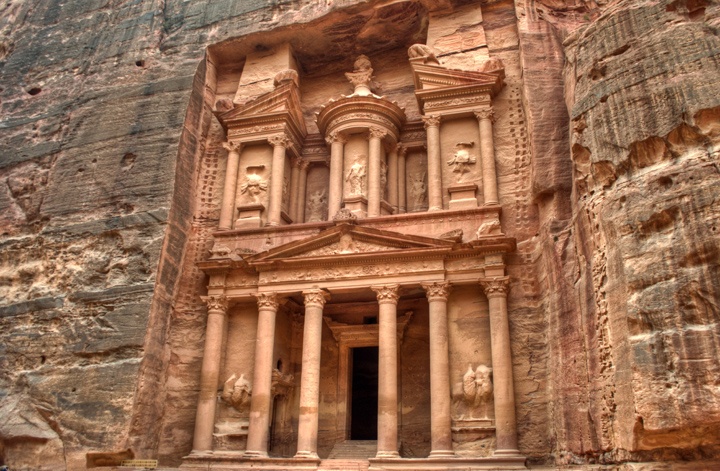 The Treasury – or Al Khazneh in Arabic – is Petra’s most iconic sight. It’s carved into a sheer sandstone cliff almost 40 metres high. And despite it’s name, it was probably a royal tomb or temple rather than a treasury, but got given the name by the Bedouins who thought that pirates had hidden treasure in a giant urn there. The urn’s on the second floor and you can still see the bullet holes where they tried to break the ‘treasure’ out (the urn’s actually just a solid piece of sandstone, so they were out of luck). The design of the Treasury mixes Classical and Arabian styles, and the details are still so well preserved and detailed that it’s hard to believe they are over 2000 years old. 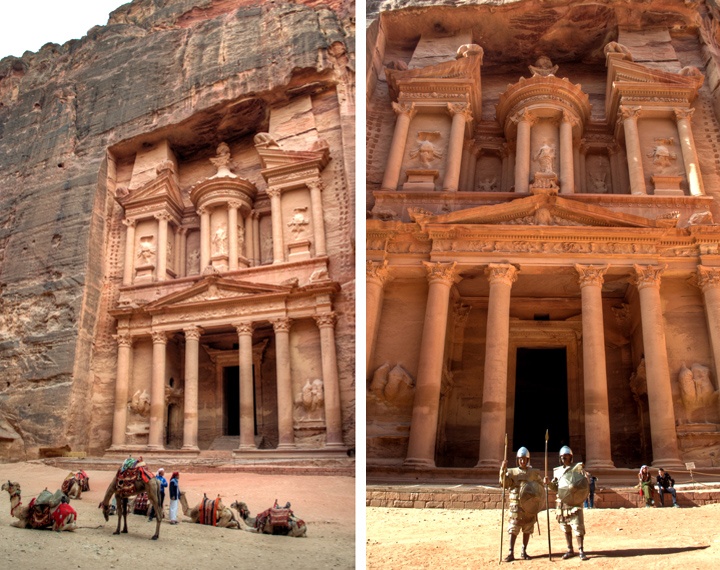 Camels (and Romans!) outside the Treasury

You can spend hours sitting outside the Treasury, watching people go by and the light change over the rocks. The one thing you can’t do though is go inside as it’s only a facade. But although the Siq and the Treasury are the most well-known parts of Petra, this is only a fraction of the ancient city. There are over 60km² worth of caves, temples, mountains and pathways. We were only just getting started… 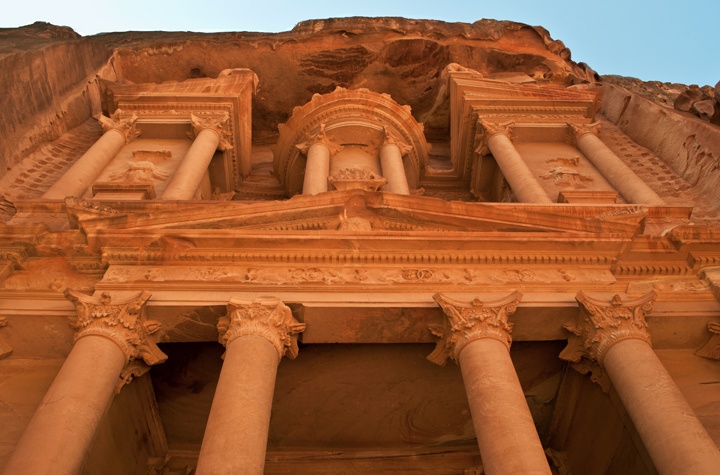 Afternoon sunlight reflects on the Treasury and makes it glow orange 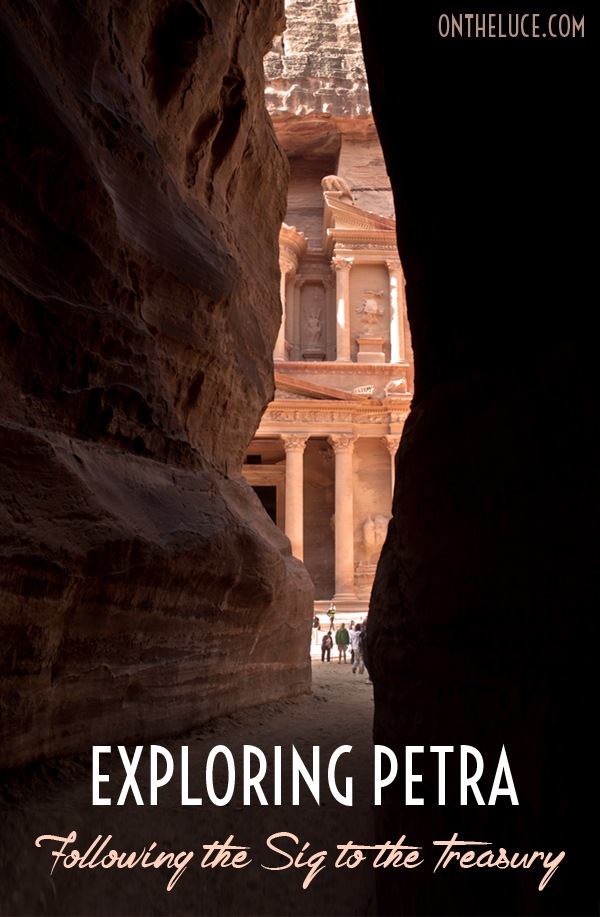 Lucy, I've been meaning to check out your post from your time in Petra, and it seems you had an amazing journey there! Isn't it magical glimpsing the Treasury for the first time? We saw it first surrounded by luminaries at night, then returned the next morning. We only spent two days there, but I could've explored for many more. I look forward to seeing the other sites you wandered through.

Thanks Tricia. Yes it was such an amazing moment to get that first sight of the Treasury – the walk seemed to go on forever to finally get there. I loved it by night too, so beautiful. We spent two days there too and only saw a fraction of the site, but certainly took a lot of photos!

We lived in Egypt for 20 years and I (Bassel) personally went to a Jordan few times but never visit the Petra. Can you believe it!

The photos and post both are beautiful, thanks for sharing this magical experience with us.

It's always the closest destinations that get overlooked isn't it? Hope you get to visit Petra sometime as it's really as spectacular as it looks in person!

Stunning photos and information. It's on my list of places to see. Thanks for sharing. :)

Jaw dropping photos and I feel like I was there, watching The Treasury for the first time.. Wow! Amazing!

Thanks – it really is as amazing and awe-inspiring when you see it emerge for the first time, glad I could get a bit of that across!

This is definitely on my list. Thank you...now I want to go even more

For anyone who loves photography it really is a dream place to visit!