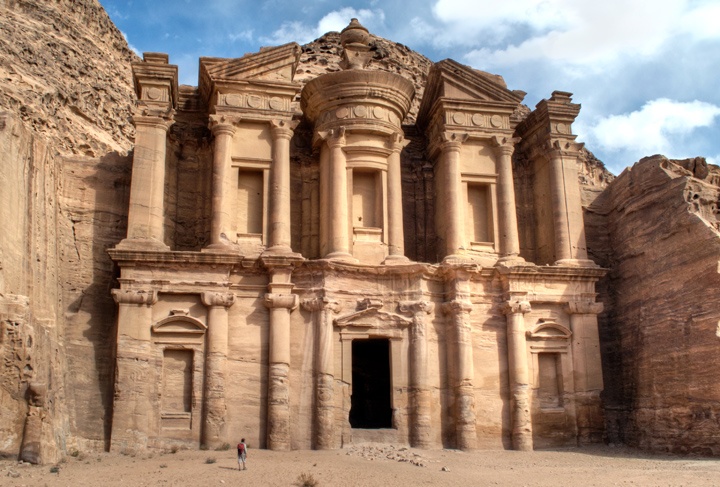 After a first day visiting the Treasury and Petra’s other main sites, day two meant it was time to take some of those pathways and go exploring. And one place that I’d seen mentioned time and again as a a must-see was the Monastery. It was described as a bigger and better version of the Treasury, with far fewer visitors. So what was the catch? That would be the 800 steps you have to climb up to reach it. The route to the Monastery starts in Petra’s old town near the museum. And there’s no chance of missing it with the gaggle of donkeys and their owners at the start, trying to tempt the less-energetic (and braver, having seen the width of the steps there’s no way I’d head up there on a donkey!) with bargain prices for a ride to the top. But we pushed through and headed off on the path. The first part follows a dusty pathway past more carved tombs, until you reach the first of the steps, carved from solid rock. 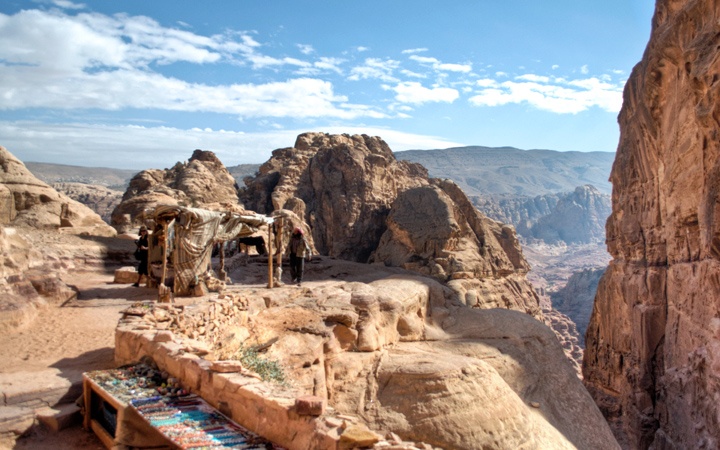 On the route up to the Monastery

The path is certainly not deserted, but the terrain – and the time it takes to get up and down – deters a lot of Petra’s crowds. We passed a few other people on the way, sweating as they overtook us on the way up or striding down smugly on the way back. But as you climb, the pathway twists and turns up into the pinky-orange rocks ahead and at times you can’t see anyone else. It might look deserted and barren around here, but you can’t go far without coming across a wooden shelter, with Bedouin women selling jewellery or making tea. And when the steps got too much there were plenty of places to stop and rest, to sit on a rock and soak up some of the views across the valley and the rocky landscape of Wadi Arab. 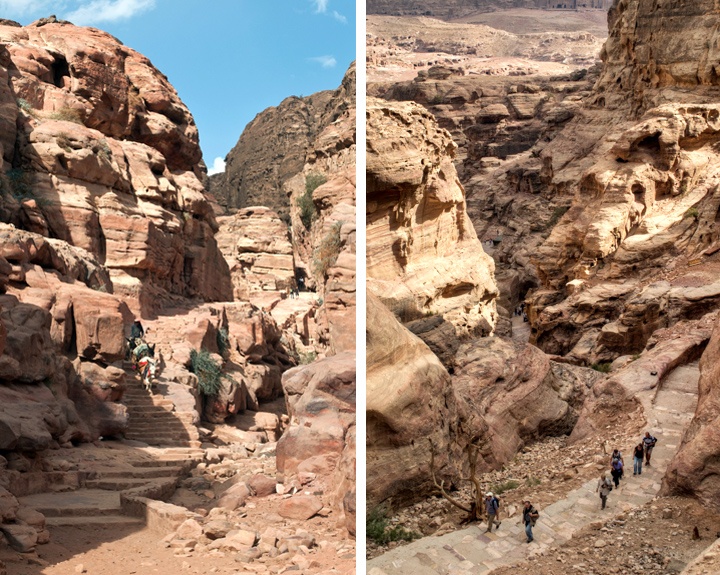 Walkers on their way up the steps

Then after trudging upwards for about half an hour, I spotted a café perched on a peak above us and thought the end was in sight. The path zigzagged its way up towards it and it looked like we’d finally made it. But it was a false alarm… the path led on around the other side of the mountain and there were more steps to come. Suddenly I was even more glad that we were here in November, with hardly any shade it must be an unbearably hot climb in the summer. And after that false alarm I wasn’t expecting it when I arrived at the top and came around the corner to see this huge temple towering above me. 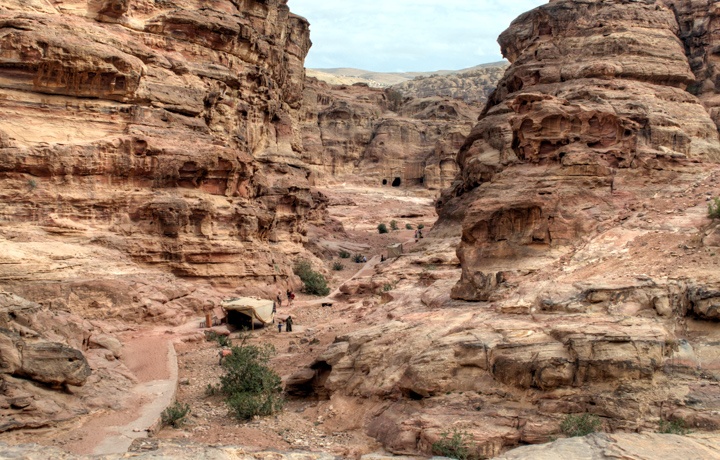 Stalls tucked away among the rocks

The Monastery – or al-Deir – is Petra’s largest temple and has a similar design to the Treasury, but on a bigger scale. It’s over 50m high and 45m wide, carved from a sheer rock face. It’s not quite as ornate as the Treasury but its size makes it an impressive feat of engineering, even without taking into account the journey the Nabateans had to make to get up there. Like the Treasury the Monastery’s name is another guess, nobody really knows what it was used for but it probably got its name from a cross carved into the rock. But unlike the Treasury you can actually go inside the Monastery, through the huge doorway that’s several stories high (you can see the scale from the tiny person in the photo at the top). 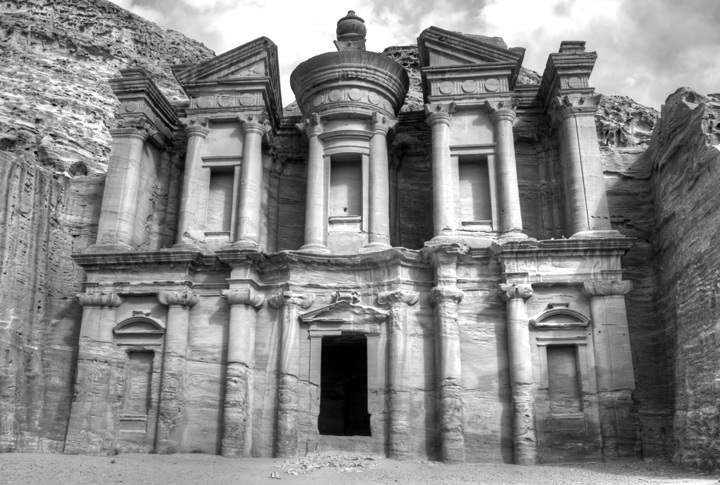 The view from the cafe overlooking the Monastery

Out the front there is a large flat plaza area, with a conveniently positioned café where you can catch your breath. For anyone with any excess energy left, you used to be able to climb right up to the urn on top of the Monastery, but the slightly precarious looking pathway’s been closed off now. There is another viewpoint you can walk up to though, but 800 steps and a view like that were more than enough for me. 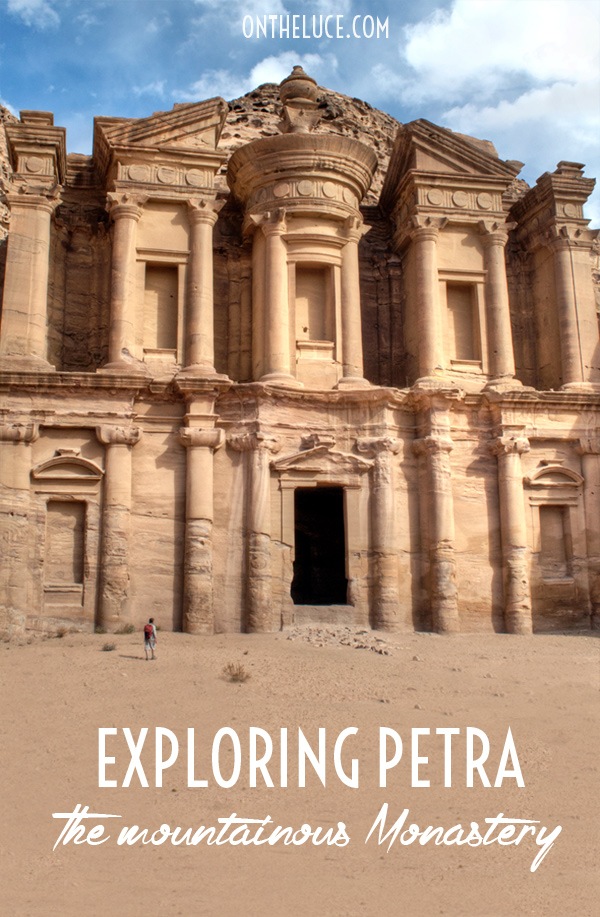 Thanks, it's a beautiful part of the world to visit.

I have got to get to Petra, these photos are awesome!

I was a little bit worried that it wouldn't live up to expectations as I've wanted to go for years but it so did!

Love it Lucy! I can't wait to get there later tho year. I hope it is as good as your trip. Where to for the rest of your year?

Sure you'll love it – the only hard bit is trying to narrow down what to see at Petra as there's so much there. My 2013 has Porto, Montengero, Norwegian fjords and a roadtrip road the US southwest so far so not a bad start!

That is amazing. What a magnificent structure,totally worth the effort to get there.

It was – though if you make it to Petra probably one to do early in the morning or late afternoon if you're there in summer!

I'm tired just thinking about 800 steps! Wow! But your photos prove it was completely worth the climb. Your posts about Jordan have really inspired me - I doubt I'll make it there this year, but I know I'll visit one day...

It's really worth the visit, and flights were surprisingly cheap too which helped! Hope you manage to make it out there sometime.