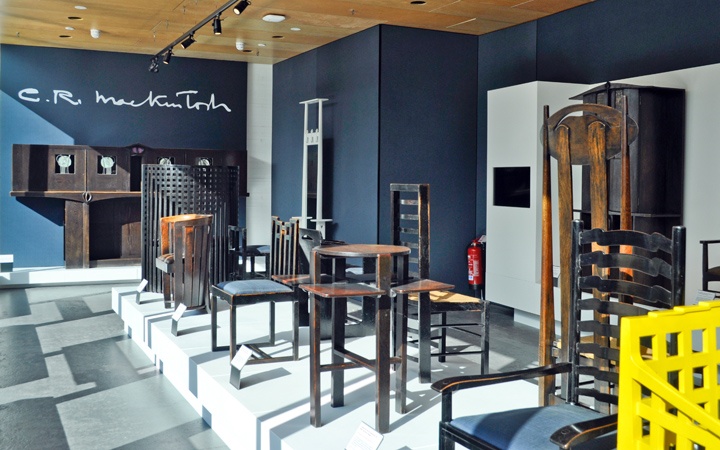 One of the city’s most famous sons, you can’t go far in Glasgow without coming across the Art Nouveau style of Charles Rennie Mackintosh. Born in Glasgow in 1868, Mackintosh trained as an architect while studying art and design evening classes at the city’s School of Art, where he met his wife Margaret. Together with her sister and brother-in-law, ‘The Four’ created a new Glasgow style. Mackintosh was a designer, he came up with the ideas and other people made his creations, and Glasgow was his muse – sometimes it was a love/hate relationship but almost all of his best-known works are in the city. So we set out on our own mini Mackintosh city tour to explore his designs and his relationship with Glasgow.

Read more: A weekend in Glasgow 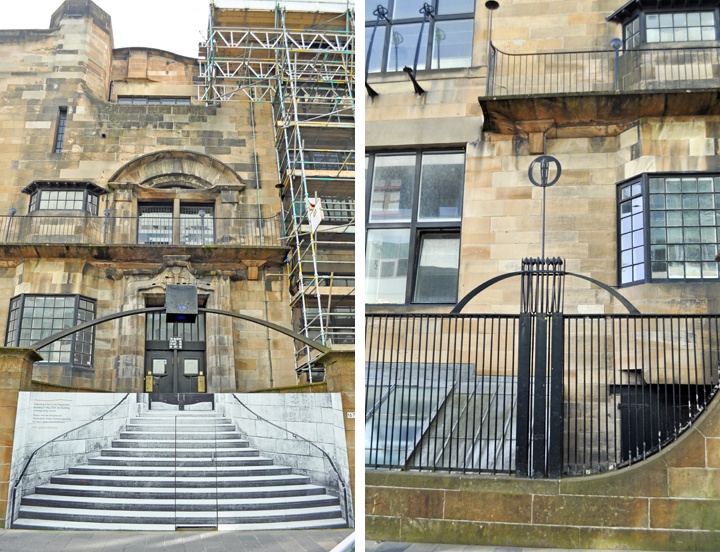 Our first Mackintosh stop was Glasgow School of Art, where you can take an architectural tour led by one of the school’s students. Mackintosh’s former university ended up being the site of his most famous building. He was working as a draughtsman at architects Honeyman and Keppie in 1895 when the School of Art asked eleven local firms to come up with a design for their new building. At the age of 29 he was only a junior but still came up with the winning submission. His stunningly simple design was partly based on his fascination with the stark form of Scottish castles. But you can also see all sorts of other influences – from nature in the metal sculpted roses along the window frames which open up as you move from left to right, and from Japan in the geometric shapes and the bow and arrow railings along the front.

Mackintosh got involved with every aspect of the design, not just the building. He also designed desks, chairs, light fittings and a clever clock system that told the same time wherever you were in the building (so students had no excuse to be late). The building should have cost £14,000 to build (equivalent to about a million pounds today) – a bargain when you look at the size of it, and as it turns out more than a bit optimistic as it ended costing half as much again to complete just one side. Once the east wing was finished the School had to raise the money to build the west wing so it took 12 years for it all to be finished. 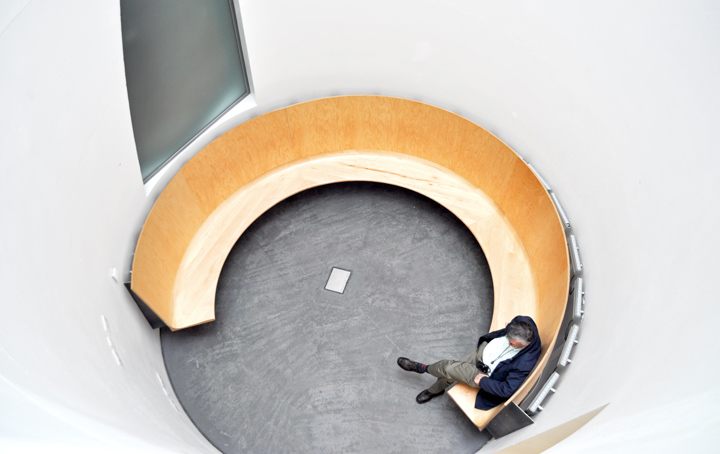 It’s now seen as one of the most UK’s important architectural sites, but the Glaswegians weren’t always fans – back in 1909 one newspaper likened it to a prison and another said Mackintosh should be publicly whipped! The locals learnt to love it over the years though and there was a huge outpouring of grief when part of the building was destroyed in a fire in May 2014. The fire started in the basement where students’ artwork was being stored before their final show. A canister of expanding foam was left near a projector and sparked off a fire that spread up the west side, destroying the library and damaging archives.

The fire service managed to contain the blaze before it did too much damage to the building itself but a lot of the interiors were ruined, and there’s years of restoration ahead. An original square black light hangs over the school doorway and won’t be turned back on until 2018 when the building is planned to reopen. While the Mackintosh building is closed the tours take you around the exterior and also into the new Reid Building opposite. A big modern space, it has white walls and light shafts built through the centre to made it bright and airy. It’s a real contrast to the dark colours and ornate details across the road. Upstairs there’s a gallery of some of Mackintosh’s furniture where you can get a close look at his famous chairs. 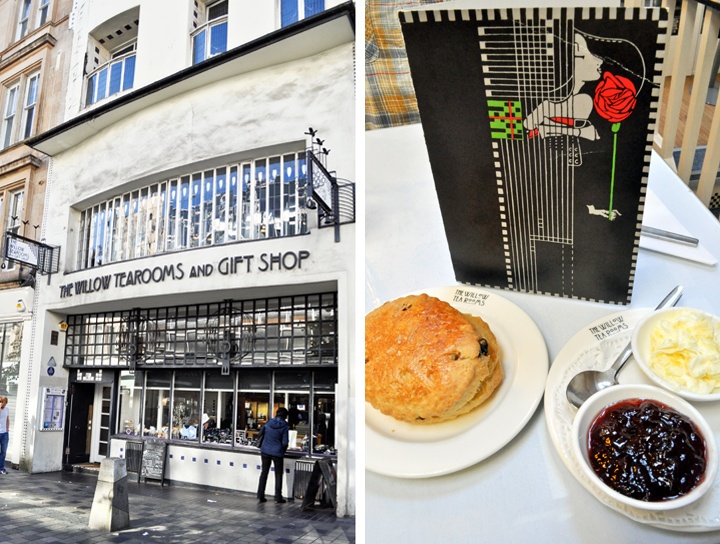 Leaving the School of Art behind we headed for a tea and cake stop at another of Mackintosh’s buildings – the Willow Tea Rooms. A tall elegant building on Sauchiehall Street, the frontage hasn’t changed much since the 1900s. Inside you can try out one of those chairs for yourself (more comfortable than they look) as you tuck into a cream tea in the tea gallery. Mackintosh met tea room owner Kate Cranston back in 1896. She was the daughter of a tea merchant and part of the temperance movement, so set up tea rooms as places people could socialise away from the evils of alcohol. She commissioned Mackintosh to paint murals in one tea room and liked them so much she got him to design the interiors for the next.

By the time the Sauchiehall branch opened he’d been given free reign, and along with Margaret he worked his magic on everything from the exteriors to the waitresses’ uniforms. The name of the street comes from the Scots word for willow tree meadow – giving the tea room its name and inspiring some of the designs. In 1917 the tea room was sold off and was part of a department store for years, until the 1980s when it was restored and reopened as a cafe come gift shop (there’s another branch on Buchanan Street but it’s a reproduction, so head to Sauchiehall for the real thing). You can see some of the other tea room interiors at the Kelvingrove Museum, where there’s a room dedicated to Mackintosh and his wife’s work. 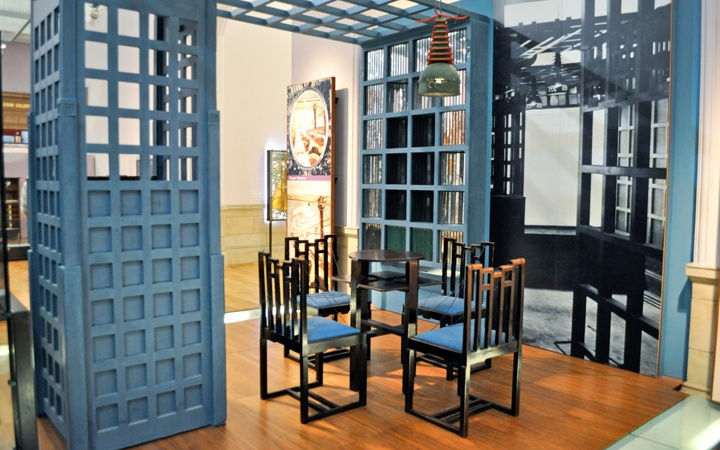 Our final stop was at The Lighthouse, now a centre for design and architecture. Built in 1899, it was one of Mackintosh’s first commissions and was originally the home of the Glasgow Herald newspaper. Today there are a mixture of studios, galleries and meeting spaces inside, with a ‘Mack’ Centre where you can see some more examples of Mackintosh’s work. But the highlight is the Mackintosh-designed former water tower, where 134 spiraling steps up to the top get you a stunning panoramic view across the city.

Mackintosh’s designs are world-famous today but it wasn’t always like that. After 20 years working in Glasgow, he was feeling disillusioned – the city didn’t appreciate him and the stuffiness of architecture was stifling him. So he moved to London, but his career stalled and he ended up as a watercolour painter, living in the South of France before he died of cancer aged 60. Like a lot of artists it was only after his death that people started to recognise how important his work was, but he’s definitely left his mark on his home city. 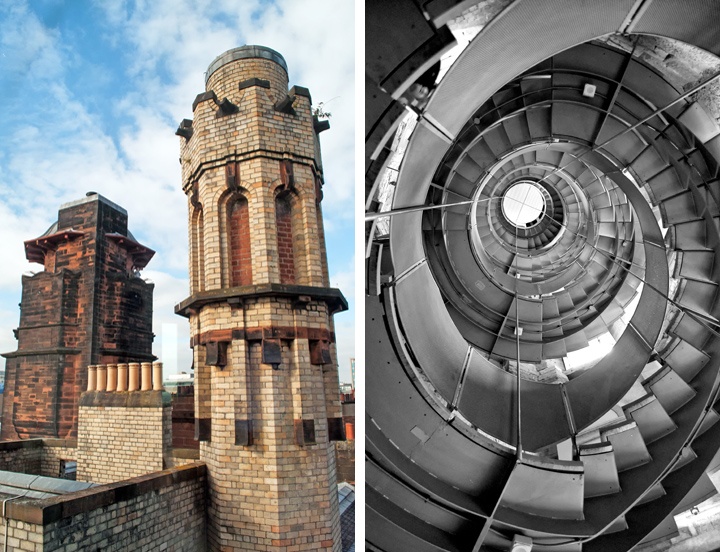 Towers and the spiral staircase at The Lighthouse

The School of Art’s Mackintosh at the GSA tours run daily at 11am, 2pm and 3.15pm (plus 11.30am from July–mid September) and last an hour. They cost £9.75 for adults (£8 for students/over 60s and £4.75 for under 18s). Entry to The Lighthouse is free, or you can take a 40-minute building tour (£7 or £5 for concessions). You can also visit various other Mackintosh buildings in and around Glasgow – the The Charles Rennie Mackintosh Society has an interactive map which shows where they all are. 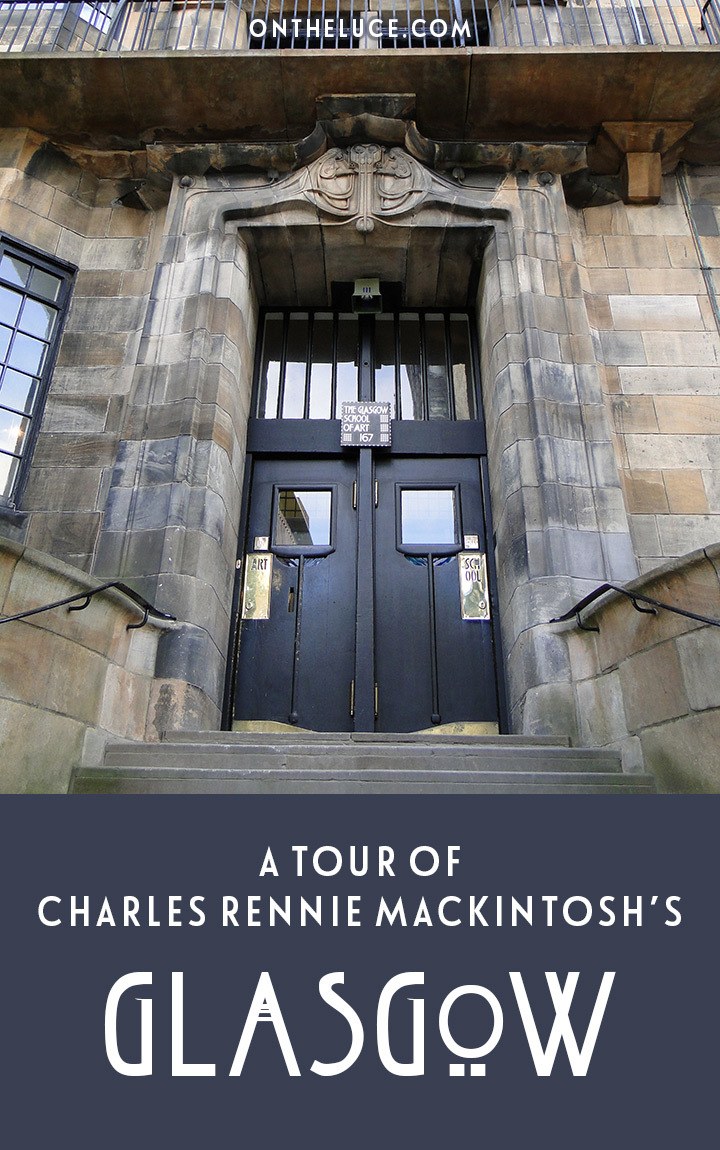 Many thanks to Glasgow City Marketing Bureau for hosting me in Glasgow. All views and opinions are, as always, my own.

There are cities it have an architect who is like an oracle or a priest... An architect who can read and synthesize the city's cultural and psychological soul.

That's a really good way of putting it – Mackintosh and Glasgow had a love-hate relationship at times but they are so closely bonded together still.

Really informative Lucy as I must admit, I didn't know anything about Mackintosh but these designs are so beautiful and the tea room looks so charming and inviting!

Thanks, I didn't know much about him before either but have always loved Art Deco and Art Nouveau so it was great to see the buildings (and the tea room cakes were fab!).

Hey girl! Absolutely love your blog! Just wanted to let you know I nominated you for the One Lovely Blog Award. :)

Thanks so much for the nomination, so lovely of you!

I adore the Willows Tea Room! Mackintosh makes me think of our Belgian Victor Horta and Henry van de Velde. They both designed as well buildings as the furniture , doorhandles, staircases and even clothes of the people in the buildings. Marvellous , this idea of 'Gesammtkunstwerk' which was popular in Bauhaus-times. Nice article and pics!

I've always loved Art Nouveau and Art Deco so really enjoyed seeing the Mackintosh buildings – will have to look out for those two when I'm next in Belgium too.

Love Charles Rennie Mackintosh! I've visited the tearooms but really want to follow the trail and get to the rest of the sights so this article was a nice little reminder to get this organised at some point.

I was surprised how many Mackintosh sights there are in Glasgow, we managed quite a few but will have to back to see the rest!