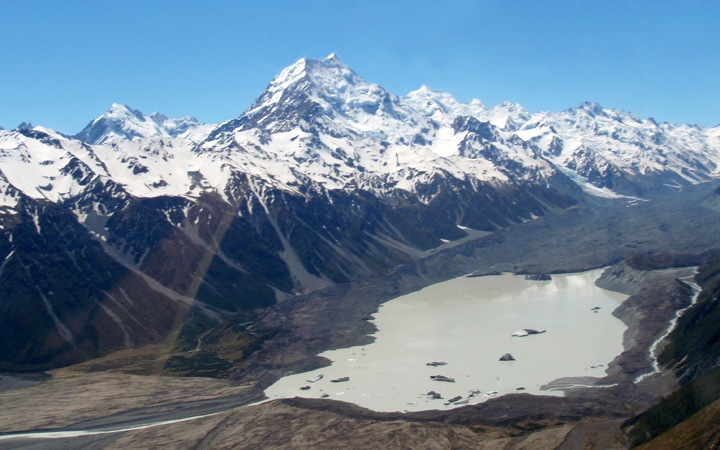 Despite being a travel obsessive, I’m not the biggest fan of flying. But that wasn’t going to stop me from embracing a bit of New Zealand’s famous adventurous spirit while I was out there. Bungee jumping was a step too far, but a helicopter trip I could do. The original plan was to do a heli hike on the Franz Josef Glacier, but after two mornings in a row spent sitting in the tour office waiting for the storms to pass, the trip was called off again and I was out of time. Or so I though, until we got to Lake Tekapo. On the opposite side of New Zealand’s South Island, it’s within reach of the Southern Alps mountain range from the other side. And although you couldn’t get onto the glacier from there, you could still stand on top of a snow-topped mountain and get a view across to Mount Cook, New Zealand’s highest mountain. 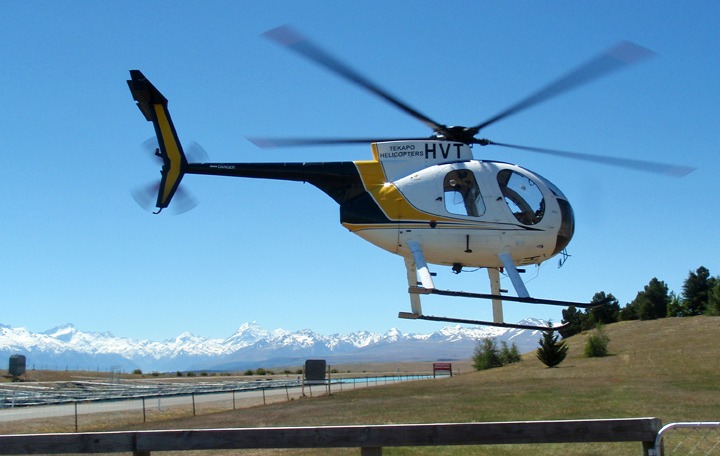 The weather behaved itself this time and on a perfect sunny day our tour started from an airfield next to turquoise Lake Pukaki. Our group of four waited nervously – well I did, the others looked pretty unfazed – as what can only be described as a tiny helicopter appeared over the horizon and touched down in front of us. I don’t know exactly what I was expecting (a police helicopter maybe, or something nice and substantial like a Chinook) but this was smaller than a Mini. We each got a go at sitting up front and I was first, wedged in next to the pilot with nothing but floor-to-ceiling glass between me and the ground. 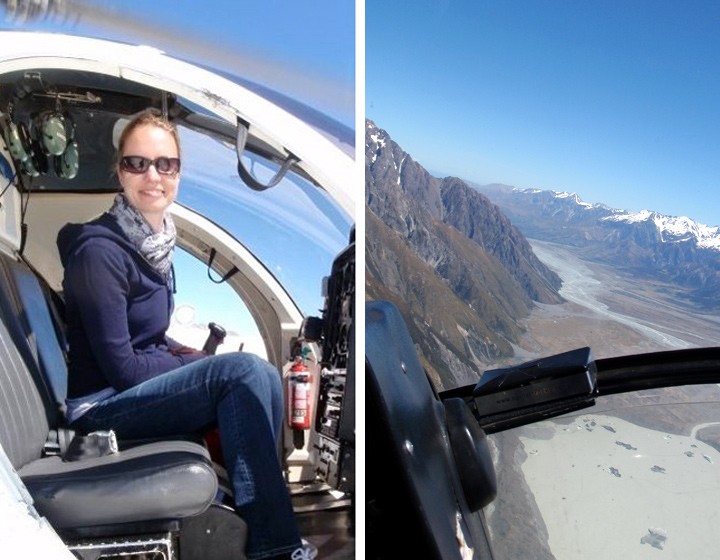 As we picked up off the grass, it felt like a cross between going up in a lift and setting off on a roller coaster. The power was incredible, and within seconds we were high up over Lake Pukaki, with the shadow of the helicopter just a tiny spot on the water below. The noise is deafening for such a small machine, so we were all given headphones and the pilot talked us through what we were seeing through a microphone. I completely forgot my nervousness as I took in the amazing views around us – and a few hundred photos. We passed by snow-capped mountains, rivers of grey meltwater coming from the Tasman Glacier and forests of miniature trees in the Mackenzie Basin below. You can see some of the views (and the angles we were flying at) in this video I took on the way. 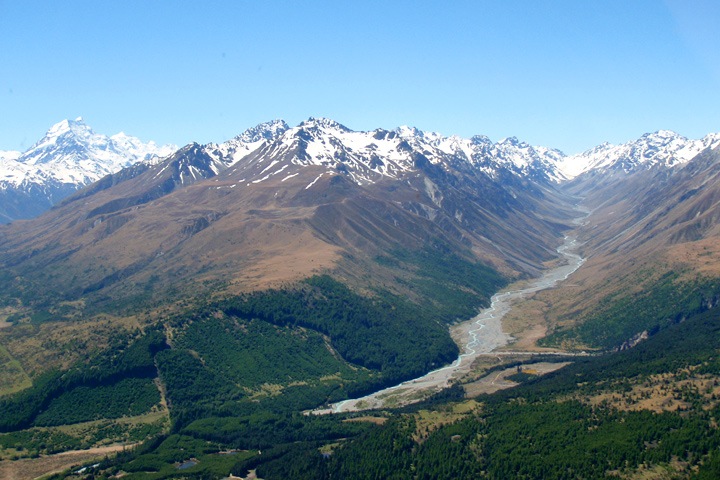 Views across the Southern Alps

After 10 minutes we touched down in the snow on the top of Mount Josef. It’s only half the height of Mount Cook, but that still takes you up to about 7000 feet, where the ground was covered in a thick blanket of snow. Our landing spot had a perfect panoramic view of Mount Cook and the rest of the Southern Alps. It was a surreal feeling to be walking around in the snow and throwing snowballs on a sunny spring day when I’d been in a t-shirt minutes ago at ground level. But the snow rarely melts here so you’re guaranteed to get a taste of winter even in the middle of summer. 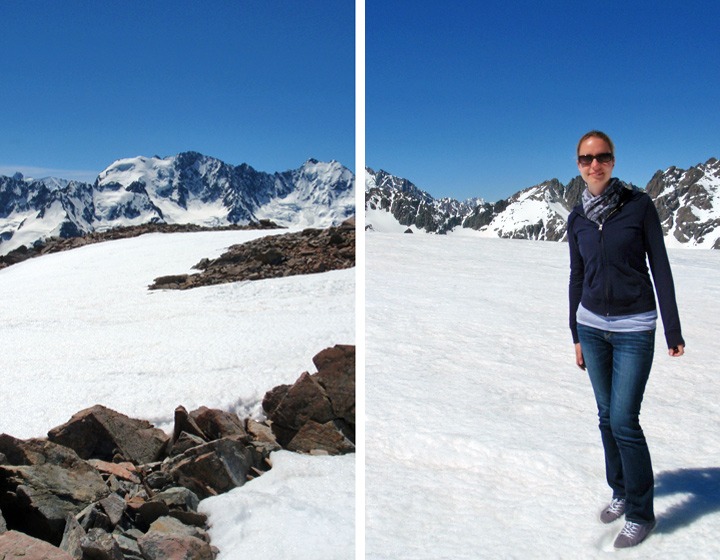 My snowy walk on Mt Josef (with poorly thought out choice of footwear!)

Then after shaking off the snow we were back in the helicopter and on the way down. It was my turn to be in the back this time, particularly bad timing as the pilot chose the return trip to throw in a few dives and twists. This was definitely like being on a roller coaster – it’s a disorientating feeling to be moving in three directions at once and you really got a feel for how maneuverable a helicopter can be. Luckily not for long though as we were back before I had time to get too dizzy, happy to have my feet back on solid ground. 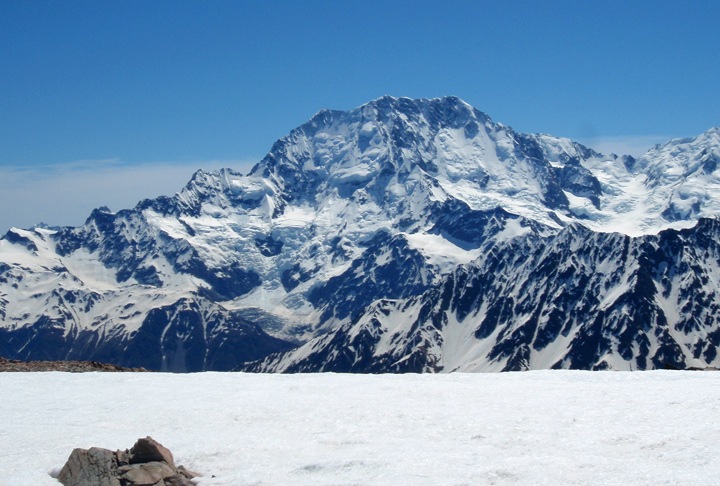 My helicopter trip was with Tekapo Helicopters, in Lake Tekapo. They offer five different tours around Mount Cook and the Fix, Tasman and Franz Josef glaciers, lasting from 20 minutes to an hour. Our 20-minute ‘Mountain High’ trip cost $199 NZD (about £85) per person.

Hey Lucy, that sounds amazing. Would love to take this ride! So far I’ve been on helicopter rides over NYC (which was super exciting) and from Vegas to the Grand Canyon (which was awesome).

I did the New York trip years ago too and loved it!

I left three extra days in my itinerary to make absolutely sure I got my scenic flight in. I got so lucky on my first day in Franz Josef to have about an hour of clearing in the morning and got the flight in. We didn't get to fly near Mount Cook due to low cloud cover, but the landing in front of Mount Tasman and the pics of both glaciers were among the highlights of my trip. Also, getting the flight in on the first day, it opened up two more days to do other things, which I used on Abel Tasman National Park and Kaikoura.

That's some very good planning! We'd generally had good weather so I assumed it'd be fine to do my Franz Josef trip and hadn't allowed enough time for it not to be. So pleased I got a second chance near Mt Cook later on as the helicopter trip was near the top of my list of things I wanted to do in New Zealand.

Good for you! I too love travel but hate flying and I'm not sure I would have done it (I'd probably have yelled at the pilot during all those dives and twists), but it looks gorgeous up there, though. Congrats on embracing adventure!

I did a small plane trip while I was out there too – New Zealand had quite the effect on me! The view really were gorgeous though, it's a beautiful country.

More amazing memories Lucy. Still got the video to view.

Just a short one but it does give a good impression of how high up we were!

Unlike you I love flying and any chance I get to fly I take. I was saving up the whole trip around NZ for the heli-hike and the first day at Frans Josef the weather didn't comply but luckily I had an extra night and got to do it the next day on Fox Glacier.

Fantastic photos! I really wanted to do the glacier hike but after two days of bad weather I had to move on unfortunately. Maybe one day. Your helicopter looked a bit more substantial than mine so I think I could give it another go!