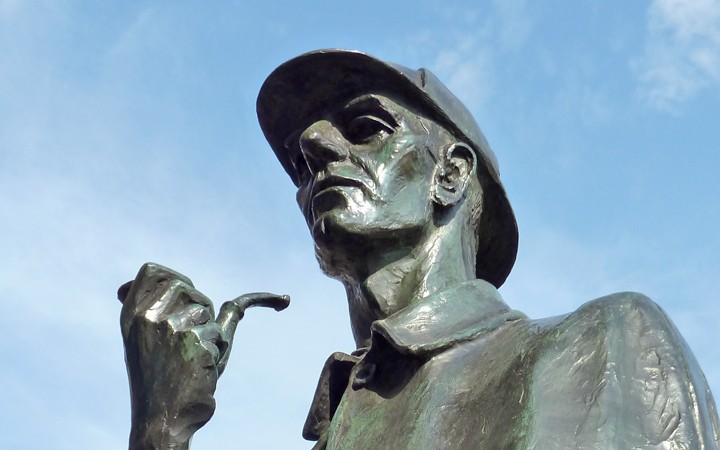 Sir Arthur Conan Doyle’s famous creation, ‘consulting detective’ Sherlock Holmes, has had a few different incarnations over the last 125 years. But one of the latest is in the BBC’s fantastic series Sherlock, which has taken the old stories and cleverly updated them to modern London. I love the show, and now I’ve got a long wait for the next episodes, I thought I’d revisit some of the previous ones on location in London. The city features so heavily it’s almost another character in the series, but a lot of what passes for London is actually Wales. Chinatown in the first series was really Newport, the graveyard at the end of series two is St Woolos Cemetery also in Newport, and West Kensington Library in the show is really Cardiff Central Library. But there are still a good few Sherlock locations that are actually in London, so I put together walk taking in some of the major filming spots – click on the map at the bottom for full directions to follow it yourself.

Warning: If you haven’t seen to the end of series three yet, beware there are spoilers ahead! 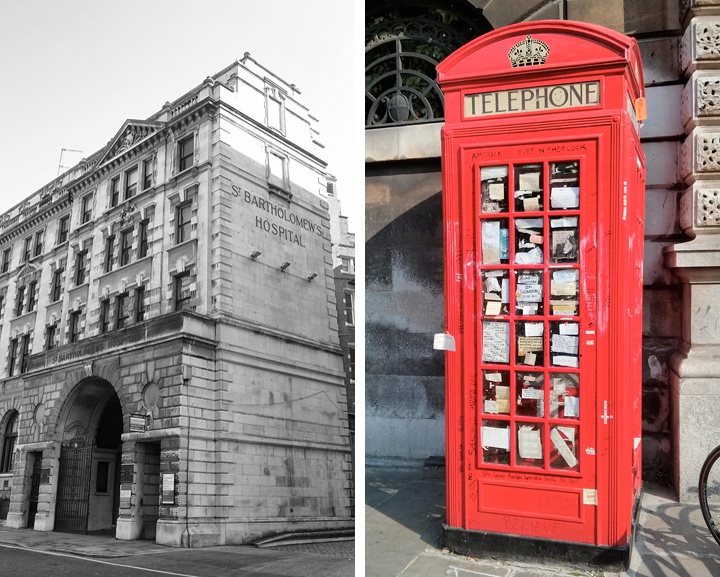 The route starts at St Bart’s Hospital (EC1A 7BE), scene of the big climax of series two when Sherlock jumps to his death from the roof… or does he? The hospital is the oldest in the UK and features in most other Sherlock episodes too, including being where Holmes and Watson first meet in episode one. The interior shots are filmed in a studio in Cardiff but you can walk around the outside of the building – though the public aren’t allowed on the roof. You can also see a phone box that was adopted as a kind of shrine after Sherlock’s ‘death’ and filled with messages from fans around the world. 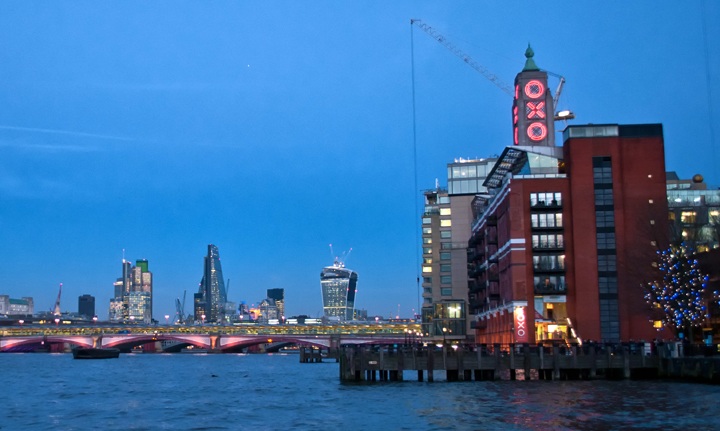 The Oxo Tower and the Thames Foreshore (with the tide in)

From St Bart’s, head south across Blackfriars Bridge and along the riverside towards the Oxo Tower (SE1 9PH). You need to get your timing right to visit the next location as this patch of the Thames foreshore disappears when the tide’s in. On the sand between the two wooden piers here is where the body of a security guard is washed up in The Great Game (series 1 episode 3). Keep going west along the riverbank and you’ll come across a couple more locations from the same episode – cross Waterloo Bridge to the Victoria Embankment, where Holmes and Watson meet with Sherlock’s homeless network. 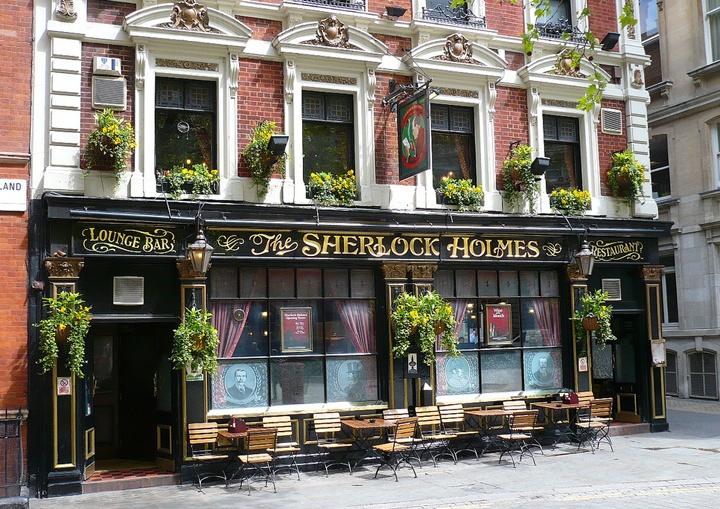 Next head inland towards Charing Cross – taking a little detour to The Sherlock Holmes pub on Northumberland Street if you fancy a drink on the way – via Trafalgar Square, which Holmes and Watson walk across in a scene from The Blind Banker (series 1, episode 2). Head on to The British Academy (SW1Y 5AH), or should that be the Diogenes Club? In real life it’s an academic centre for humanities and social sciences, but in Sherlock it’s a gentleman’s club co-founded by Sherlock’s brother Mycroft. The club has a strict ‘no talking’ rule which Watson falls foul of when he goes to look for Mycroft there in The Reichenbach Fall (series 2, episode 3) and ends up getting chucked out by the bouncers. 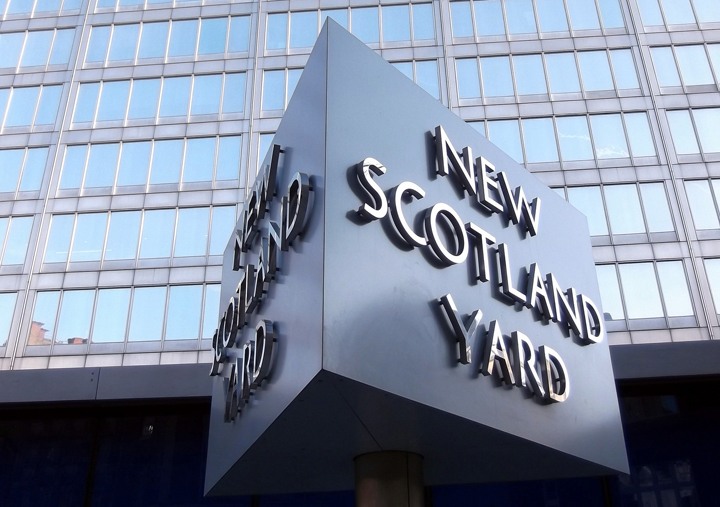 Carry on south across St James’s Park to New Scotland Yard (SW1H 0BG), the Metropolitan Police headquarters – and base for Inspector Lestrade – which crops up in several episodes. Keep going on past Victoria station and into upmarket Belgravia. The house at number 44 in Eaton Square (SW1W 9BD) features as the house of dominatrix Irene Adler – aka ‘The Woman’ – in A Scandal in Belgravia (series 2 episode 1). The houses around this square are worth millions, but only the outside features in the show as all the interiors were all shot in Wales (at Fields House in Newport, also a filming location for Doctor Who). 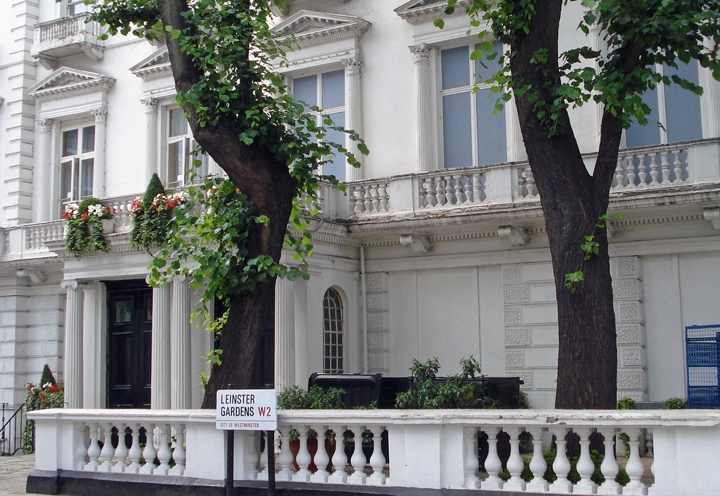 From Belgravia it’s a big hop onto the next location, so if you’re feeling energetic you can take the 45-minute walk across Hyde Park otherwise catch the Circle Line Tube from nearby Sloane Square to Bayswater. Here you’ll find Leinster Gardens (W2 3AN) where the two ’empty houses’ at numbers 23 and 24 feature in His Last Vow (series 3 episode 3), where Sherlock beams the face of Mary Watson onto the front of them. These two houses are just a façade, with painted-on windows and doors with no letter boxes. The original buildings were knocked down when the Metropolitan Railway was built in 1868 to make a stretch of track where the steam trains could vent and keep the tunnels free from smoke. 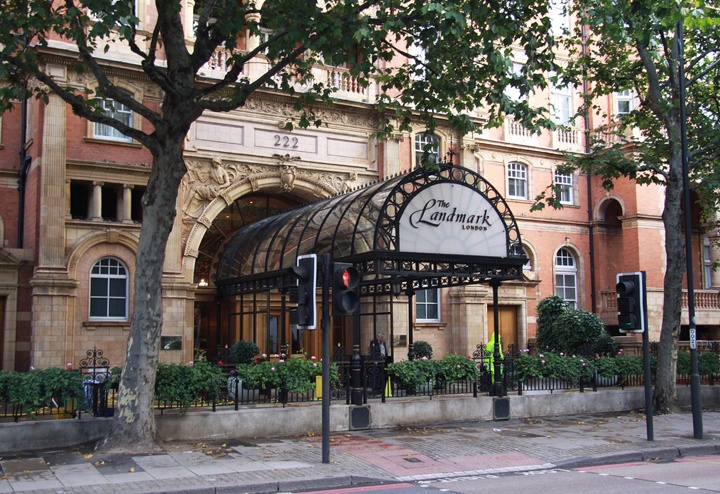 Head east next, past Paddington station and onto Marylebone Road to the Landmark hotel (NW1 6JQ). This features in The Empty Hearse (series 3, episode 1) as the restaurant where Watson takes Mary to propose to her. Well at least the exterior does, the inside shots were actually shot a bit further away in Cheltenham, at a former art deco cinema turned restaurant called The Daffodil, which also happens to be where I got married last year! You get a good view of the restaurant’s distinctive red and black floor tiles when Sherlock gets knocked out on them by Watson once he finds out he’s still alive. 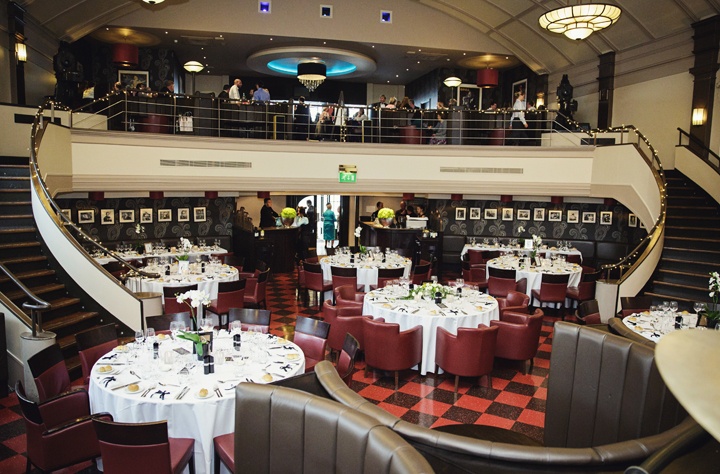 Inside The Daffodil Cheltenham (rather than the Landmark in Marylebone)

Back on the walking route, carry on east along Euston Road to the most important of all Sherlock locations – his home at 221B Baker Street. Or both of them in this case. First up is the real 221B Baker Street, which is now the Sherlock Holmes Museum. With so many Sherlock-themed buildings around here it couldn’t be used in the show, so instead they used a quieter street half a mile away. The real address is 187 North Gower Street (NW1 2NJ) but it gets a new front door with a 221B sign for filming. The café next door really is called Speedy’s though, and unlike the flat where the interior shots are done in the studio, you can really go and get a cup of tea inside – the perfect end to a Sherlock tour. 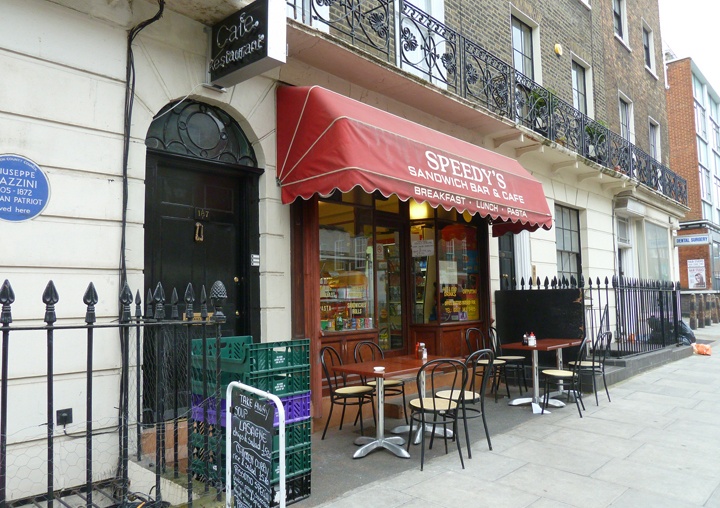 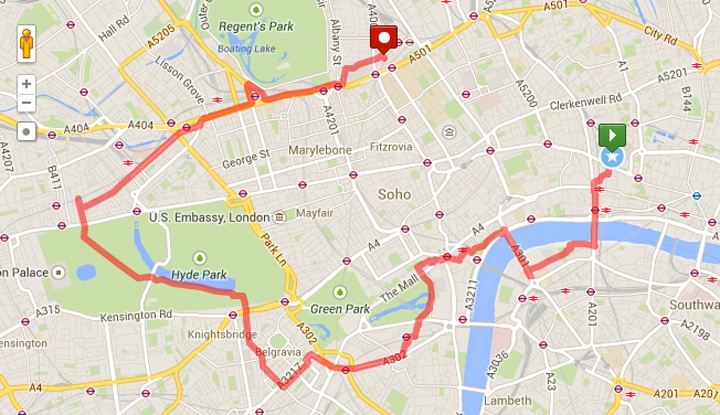 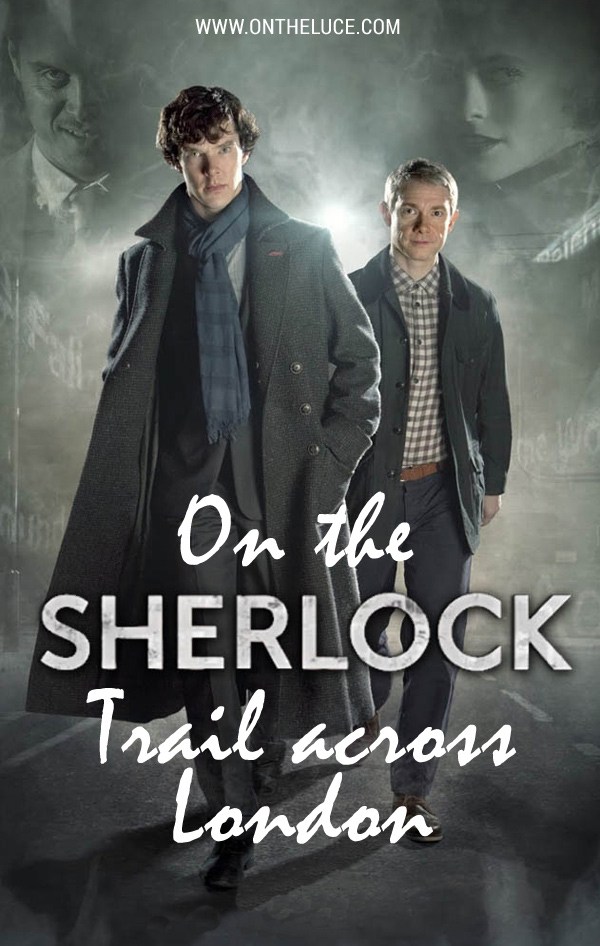 Do you know where the pretty street is in The Great Game where they are walking after leaving Kenny Prince's house?

I love this! Will definitely be adding it to my to-do list in London!

That's great, hope you enjoy it!

Hi Lucy, thanks for this great post. I'm planning a trip to London with my 14 year old daughter and both of us are huge Sherlock fans. How much time would you allow for this tour, assuming we don't know London at all? (It's our first visit.) We'd take the Tube across town as you suggested.

Hi, I would allow at least two and a half hours to do the full route without rushing - and a bit extra if you want to go into any of the places en route. Hope you and your daughter enjoy it and your trip to London!

Wow, really great article and the route map is just amazing! We´ve been to London around last christmas for about three days and tried to see as much from the city as possible. We will definitely try the route when we come back again.

Thanks! Glad you liked it and hope you get to put it to use when you're next in London,