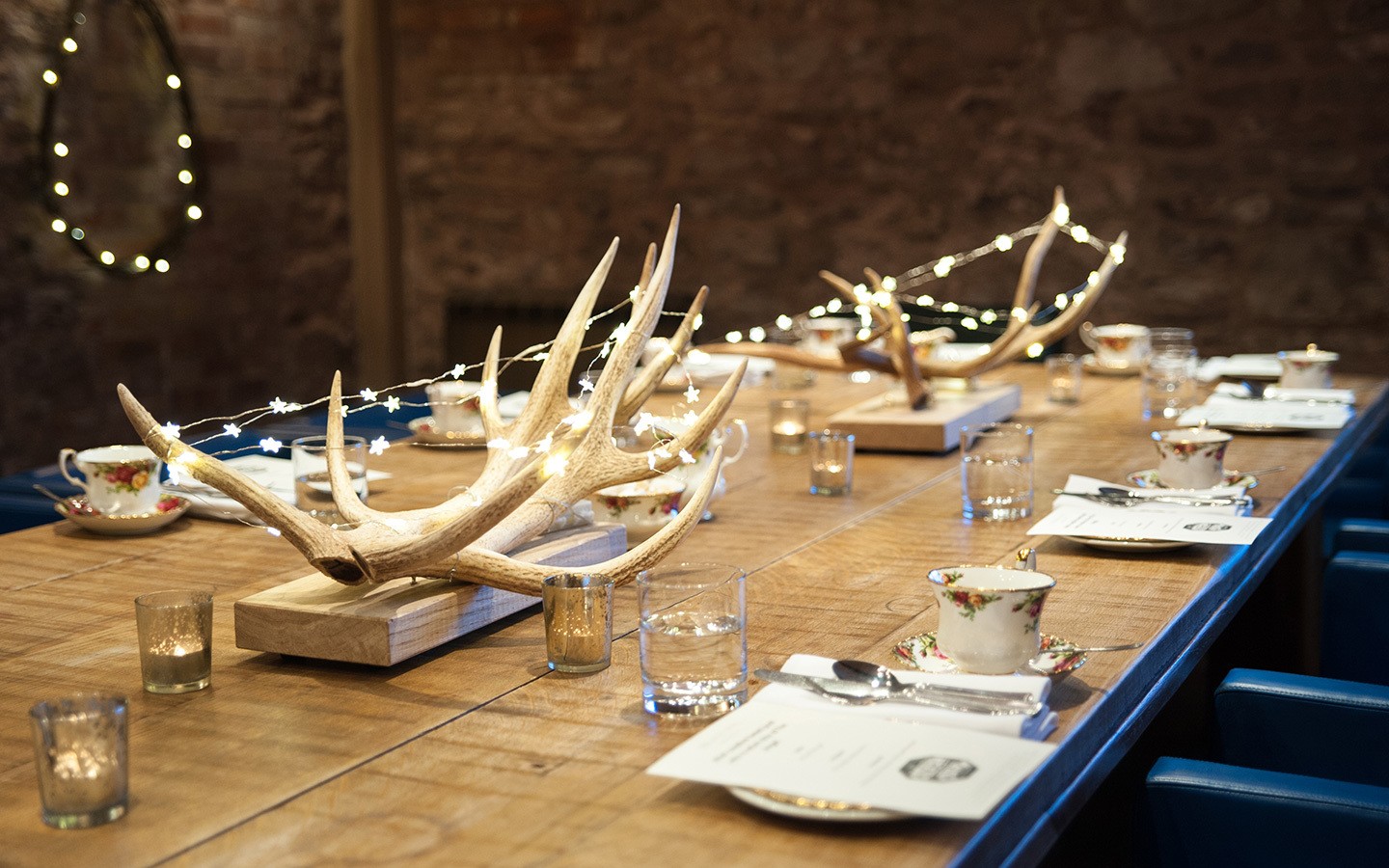 In South Wales, close to the English border, there’s a small town that’s become a big hit with food lovers. Abergavenny hosts Wales’ biggest food festival in September, with hundreds of stalls and over 30,000 visitors. Food is to Abergavenny what books are to nearby Hay-on-Wye. But September’s not the only time it’s worth visiting if you love to eat. The town also has a Christmas food fair in mid-December and a crop of good restaurants, independent cafés and local food producers open all year. Abergavenny’s only 25 miles away from where I grew up, but I’ve somehow missed out on visiting. So when I got an invite from the Angel Hotel to come and join a festive feast involving cake, cheese and prosecco, how could I resist? 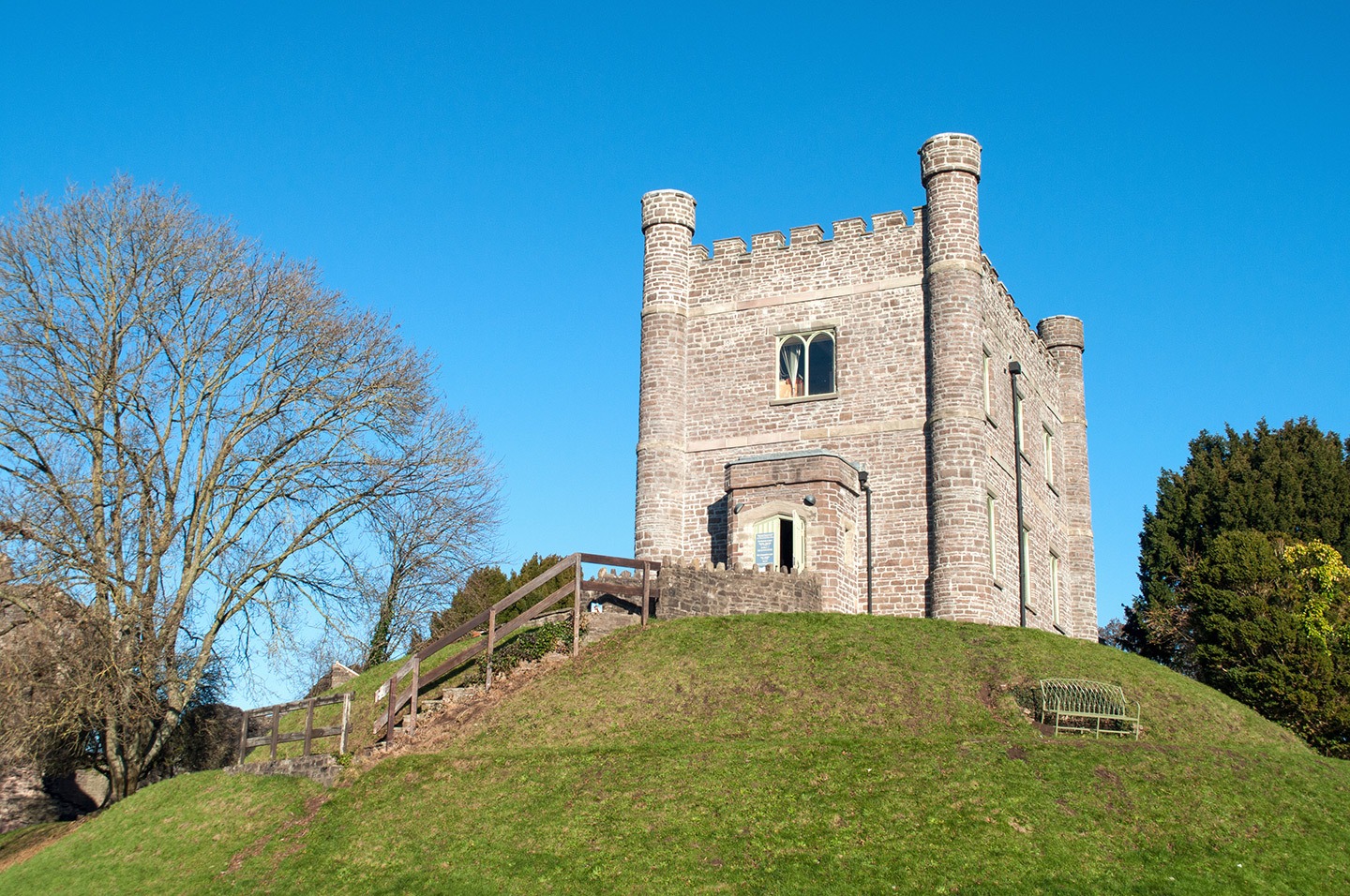 The Angel is right in the centre of Abergavenny, near the castle. It started life as Georgian coaching inn, and has been through a few makeovers since it opened in 1829. You’ve still got historic features but there’s a contemporary feel too – and it was awarded Hotel of the Year for Wales 2016/2017 at the AA Hospitality Awards so expect great service. There are 34 bedrooms, split between the hotel and converted outbuildings, plus a bar, restaurant and function room. It’s one of those places with lots of different levels and rooms, where you’ll have no problem finding a hidden corner to curl up with a book or a drink. And the Christmas tree, lights and roaring fire made it extra cosy. But as this is Abergavenny, what about the food? 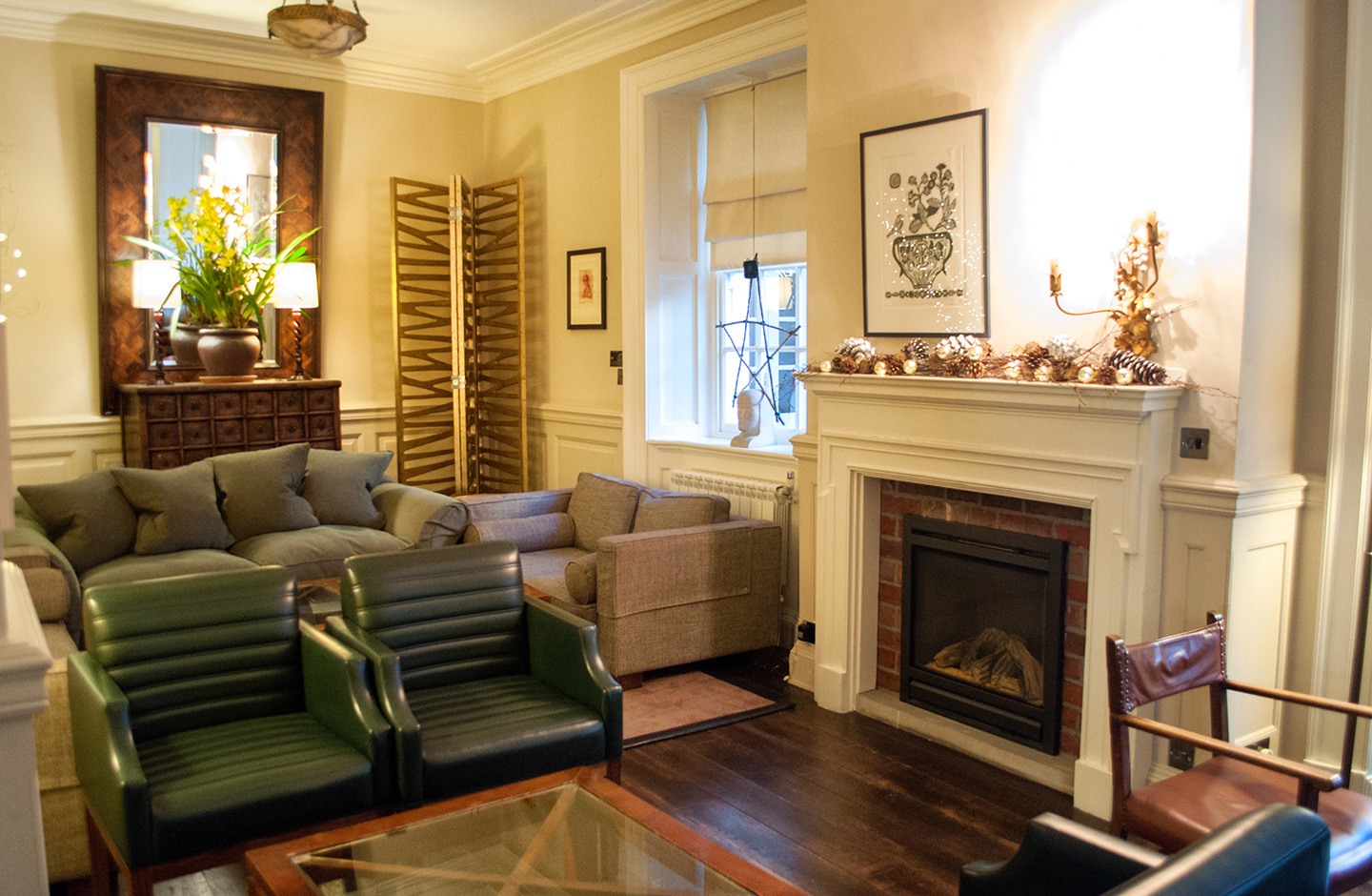 Our foodie day started in the hotel’s newly renovated wine cellar, where I joined a group of bloggers to try out the Angel’s afternoon tea. The hotel’s a member of the Tea Guild and has been given their ‘Award of Excellence’ since 2008. There are only nine hotels outside of London which have this award, so it’s a big deal in the tea world. But would the taste live up to the expectations? The location was definitely a good start, with a table decorated with wooden antlers and star lights, and set with a bone china tea service. 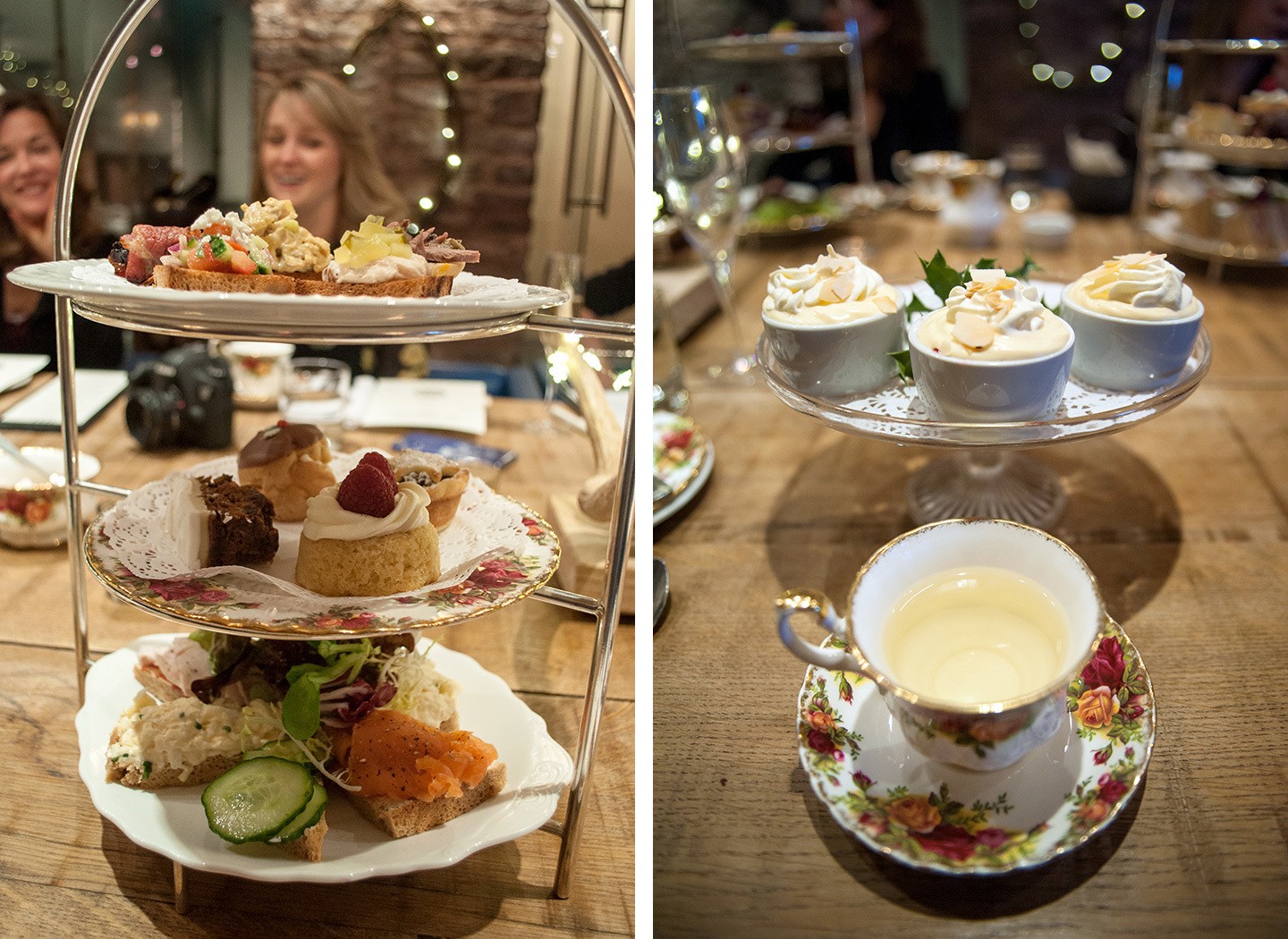 The hotel serves High Tea in their Wedgewood Room, with a different menu each day. Our pre-Christmas feast had a festive touch. There were three tiers of deliciousness, starting with beef and mushroom choux buns, open sandwiches, smoked salmon and coronation chicken savouries. Next came mince pies, Christmas and vanilla cakes and profiteroles. And when you though you couldn’t possibly squeeze another thing in, along came mini trifles and scones with jam and cream. An elasticated waistband is a good idea… 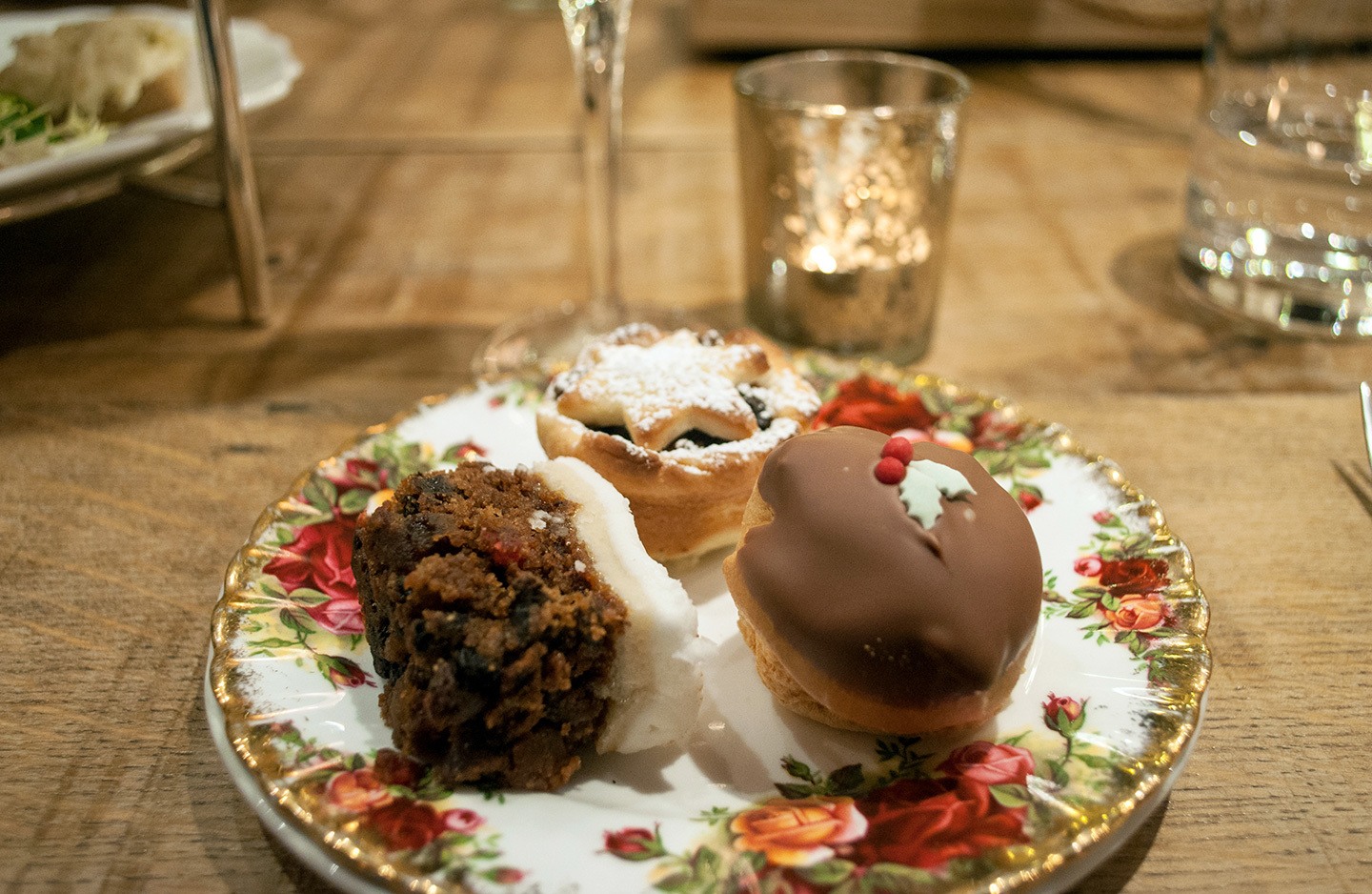 Now I haven’t been able to eat gluten for the last couple of years, and gluten-free afternoon tea attempts since then have been a bit hit and miss. But this was one of the few times when the gluten-free version looked and tasted as good as the ‘real’ version. The cakes were light, the bread was fresh, and the scones didn’t crumble into dust when you bit into them. So it would’ve been a shame not to eat the lot. 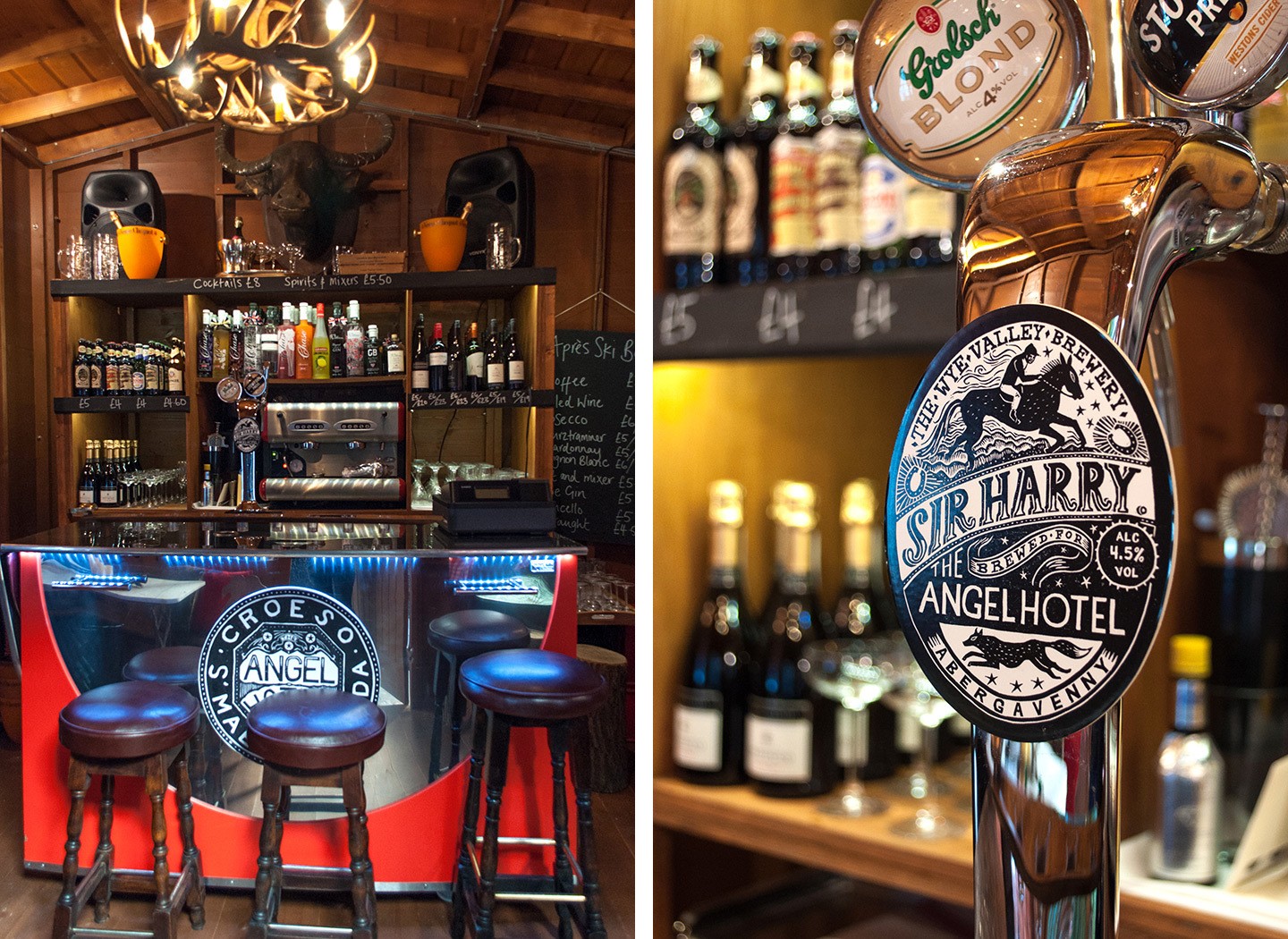 What I probably didn’t need three hours after stuffing myself to bursting is more food, but I’ve can never resist cheese. Over the winter months the Angel are bringing the Alps to Abergavenny with a pop up ski bar in a wooden chalet outside the hotel. Its open from Friday to Sunday for mulled wine and festive cocktails. But on Thursday evenings they go the whole hog with a traditional Swiss fondue night, lederhosen and all. You can see us in action in the mannequin challenge* in the lodge below (*for those as out of touch as me it’s a video challenge where you stay still and the camera moves – look out for me at the end!).

The fondue came with potatoes and bread for dipping, air-dried beef and gerkins, and was followed by a Swiss apple tart and cream. By this time we really couldn’t eat or drink anything else, so it was time to head up to bed. The hotel has a range of different rooms – from the standard executive rooms up to a four-poster suite. We had a comfy bed, lounge area, huge windows and an en-suite bathroom with bath and shower. What we definitely didn’t have was a lack of space (I’ve lived in London flats smaller than this!). 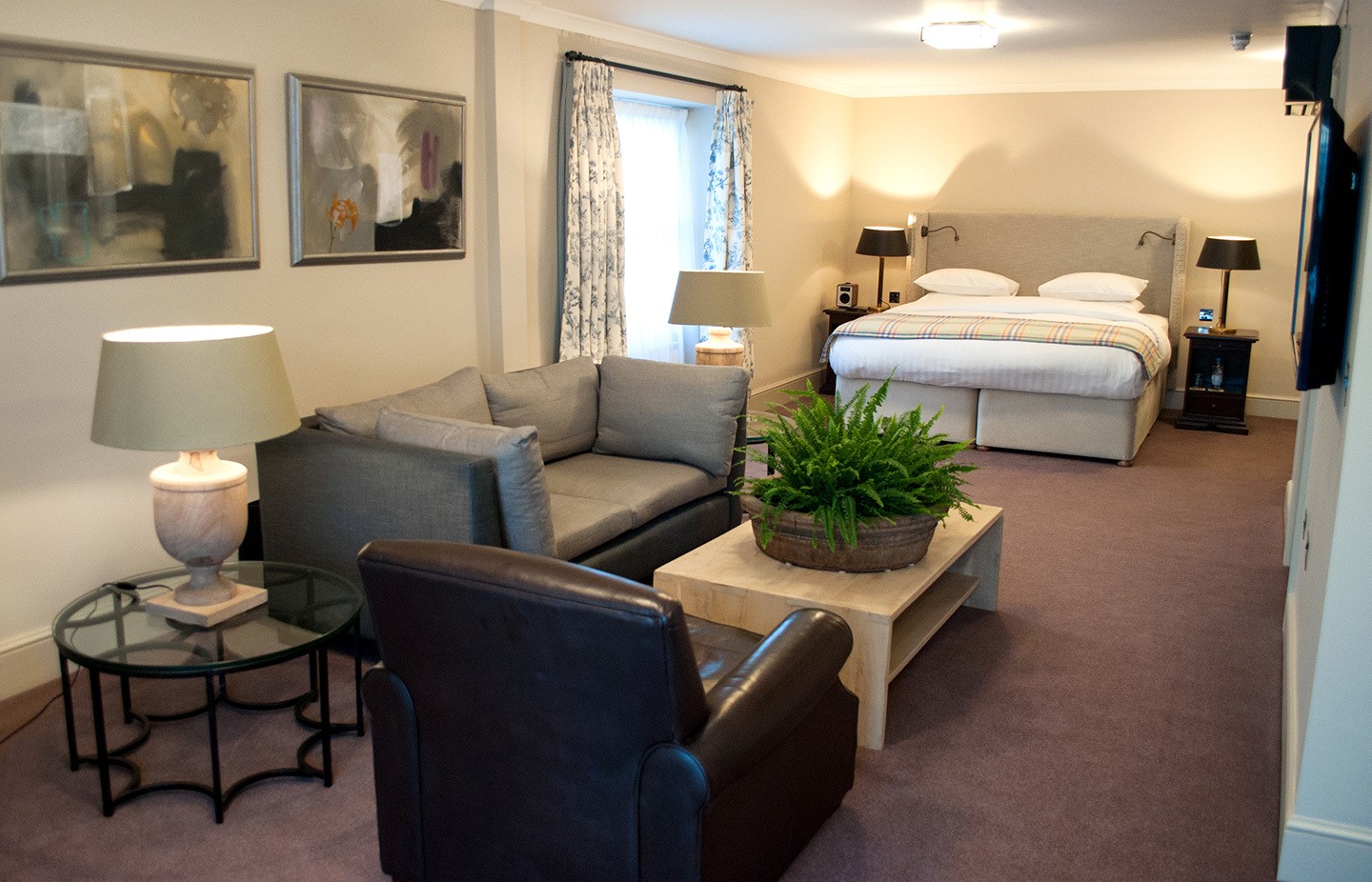 We woke up to a gorgeous sunny morning, and an excess of calories to burn off, so headed out to explore Abergavenny. The town is surrounded by three mountains – Skirrid, Blorenge and Sugar Loaf – and the Brecon Beacons National Park. Some of our group headed off on a walk with Drover Holidays, but we stayed back to take a look around the town. Tuesday is market day in Abergavenny so it was packed with people. It’s a classic old market with a little bit of everything, from meat and cheese to bags and batteries. We ended up coming away with a drill bit, a handmade candle and a big bag of vegetables, as you do. 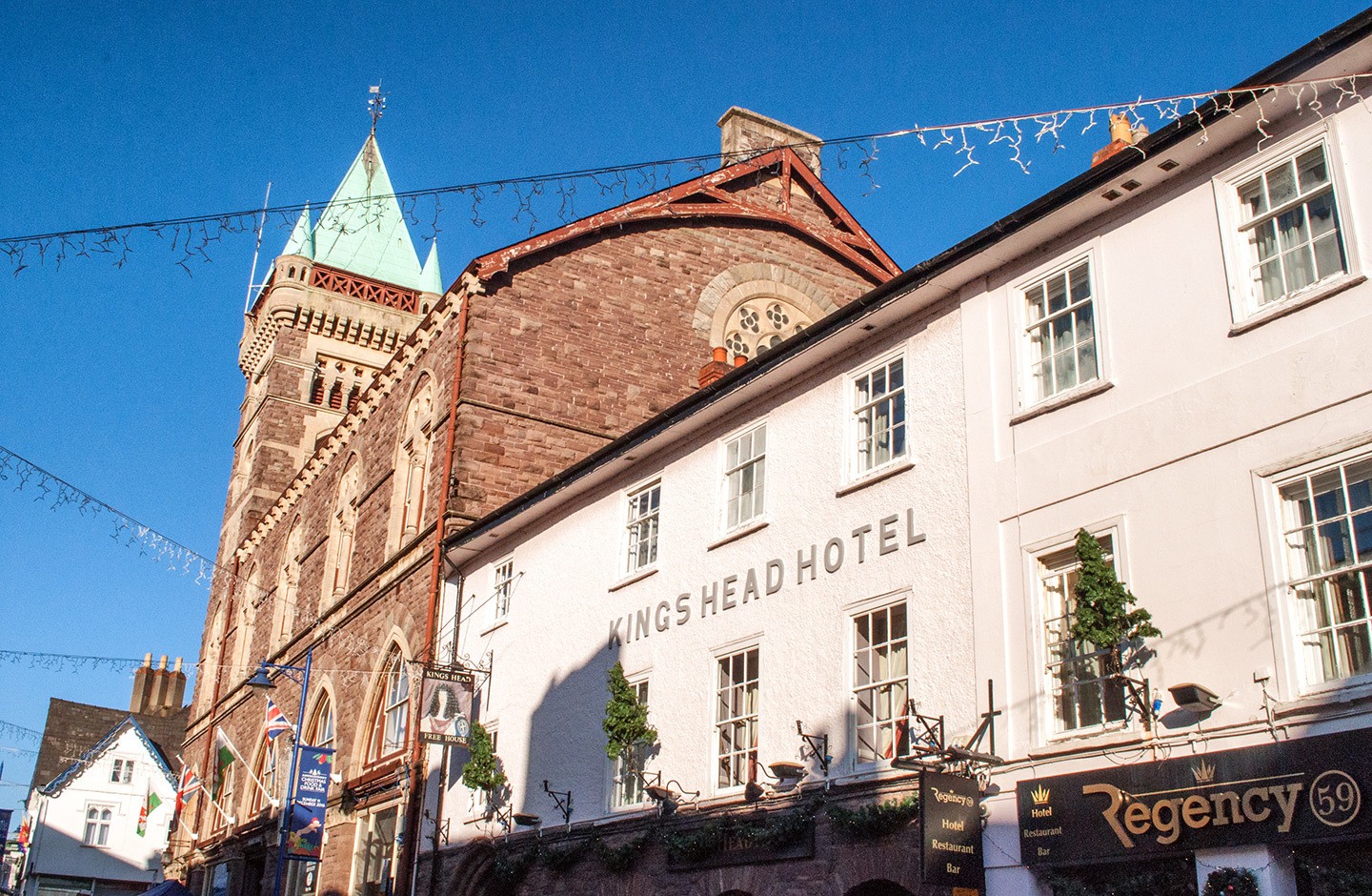 We also dropped into the castle ruins, which date back to 1087 and were extra atmospheric with a dusting of sparkling morning frost. By this time it’d been at least a few hours since we ate, so our final stop was The Chapel. It’s the Angel’s sister property, a converted chapel come café, art shop and gallery. You can buy art supplies or local crafts, and they hold workshops with artists, writers and musicians. Or you can just drop in to eat or drink – it’s a cosy place serving seasonal produce prepared in an open kitchen. Think soups, salads, frittata and cottage pie, along with locally brewed beers and biodynamic wines. Just another reason to add Abergavenny to your foodie wishlist, whether you’re down for the festival or just the weekend. 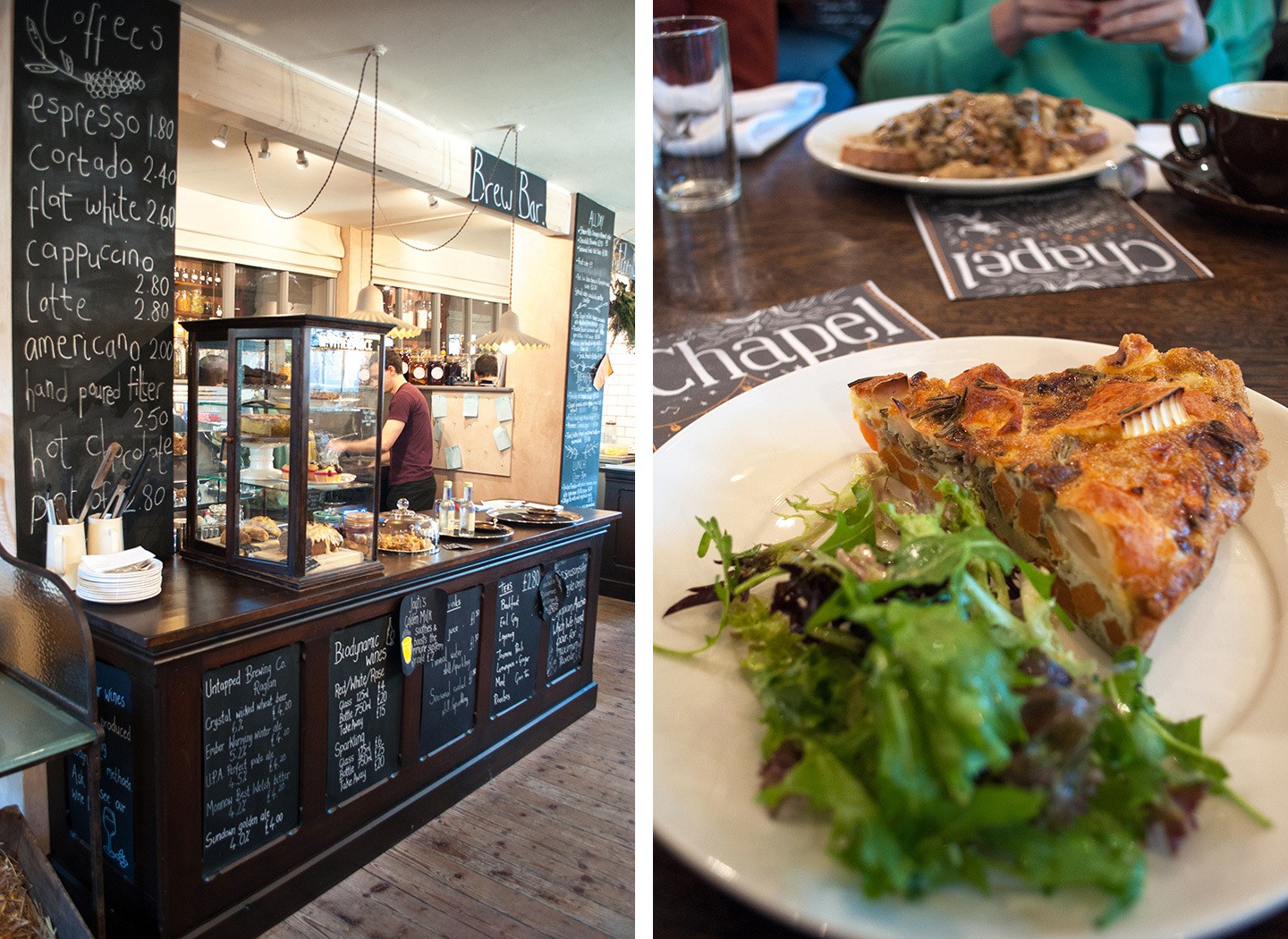 Abergavenny is about 40 minutes from Cardiff and an hour from Bristol, or two hours 15 minutes from London by train. Rooms at The Angel start from £85 a night in an executive room on a room only basis. Afternoon tea costs £30 per person and is served every day of the week. The Après Ski bar is open during December from Friday to Sunday, and you need to book in advance for the fondue nights. 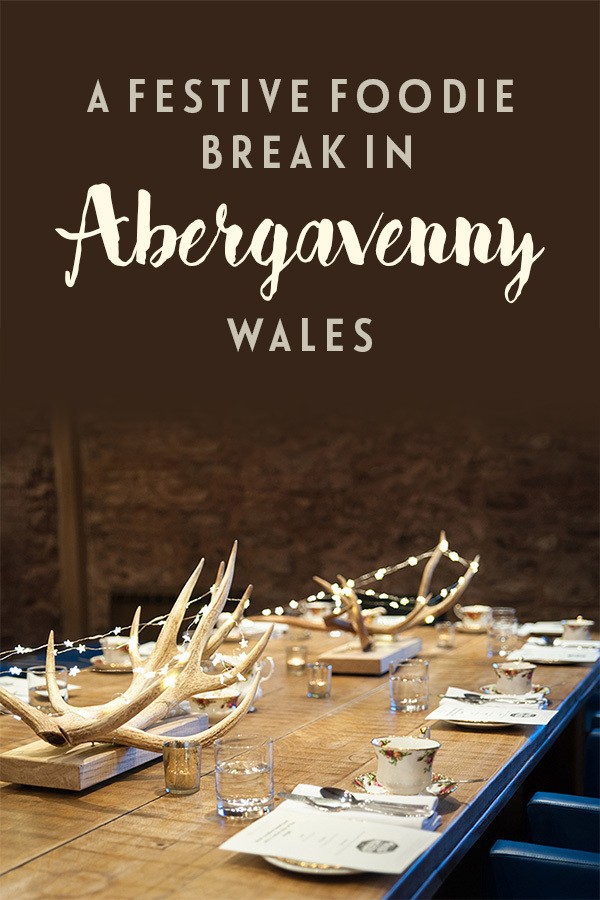 Many thanks to the Angel Hotel for hosting me. All views and opinions are, as always, my own. This article contains affiliate links, where I get a small commission at no extra cost to you – thanks.

Amazing pics.....and I am sure you did have a great time.

Thanks, it was a great time and really got me in the festive mood!

Oooooh this sounds super tempting, and right on my doorstep. Well, ish....;)

It was great – I seriously didn't need to eat for a good few days after!

I've past the Angel Hotel many times and thought it looked so smart. I've already planned my next visit to try the afternoon tea here.

If you go back again, I think you'd like Alison Tod, it's a very smart hat shop on the high street... the owner has made hats for movie stars. :)

Hope you enjoy the tea – and thanks for the tip about Alison Tod, I'll take a look when I'm next in Abergavenny!

The food and hotel look fabulous - just my kind of place and I love the look of the Ski Bar. Not sure I could've managed the mannequin challenge without giggling!.

We did struggle – managed it in one take though, but my face was shaking by the end by trying to hold a smile the whole time!