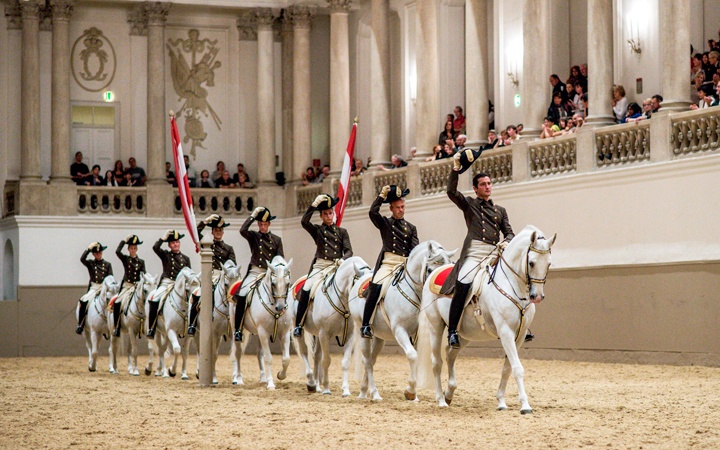 Like most girls I went through a horse-obsessed phase – but foot-high jumps and managing to cling on when we got to a canter were the extent of my horsemanship. It’s years now since I was last on a horse, but I’m still in awe of their power and grace, particularly when someone else is doing the riding. So when I visited Vienna, I thought I’d see how it was really done at the city’s Spanish Riding School. Unfortunately it turned out that I wasn’t the only one on holiday in July. Each summer the horses head to Heldenberg in the Austrian countryside for a well-earned rest. But you can still take a tour to meet the few that stay behind and see what goes on behind the scenes at one of the world’s oldest and most famous riding schools. 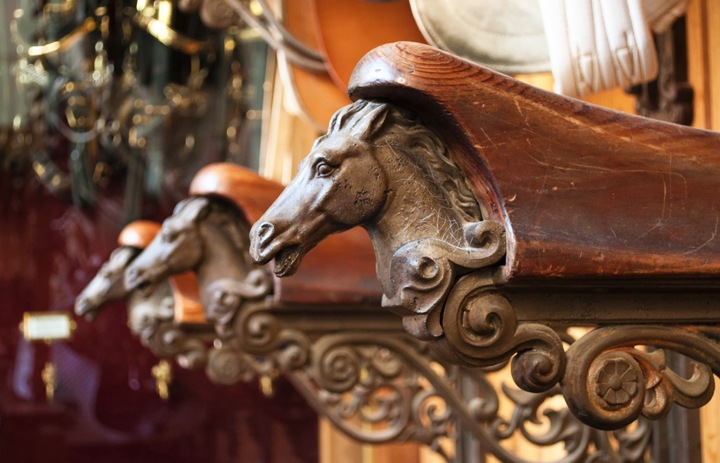 Inside the school’s tack room

Vienna’s Spanish Riding School – or Spanische Hofreitschule – has been training horses and riders since it was established by the Habsburgs back in the 1500s. The school buildings form part of the Hofburg Palace, with the stable entrance hidden away behind an unassuming doorway. You’d never know that you were walking past stables that hold 70 horses as well as an ingenious giant treadmill to exercise them on. The school’s main performance space, the Winter Riding School, is a grand hall decorated in shades of grey and cream, with delicate carvings and huge glistening chandeliers. It was built in 1735 for Emperor Charles VI and a portrait of him still watches over the horses and riders as they perform. 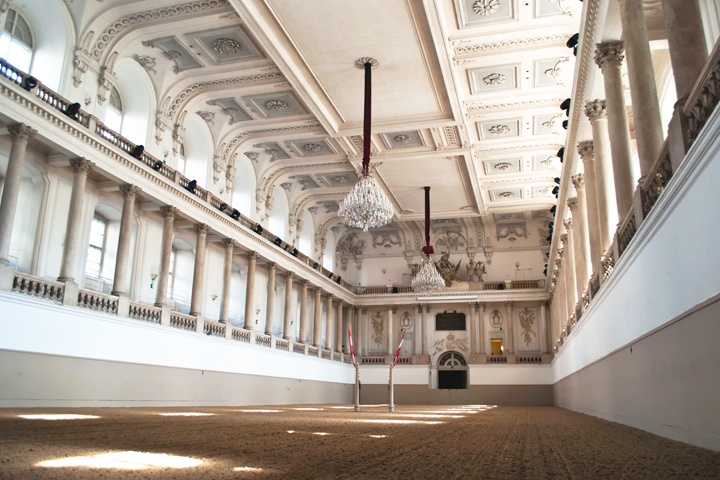 It’s not the school or its riders that are Spanish – the name comes from the horses. They are all Lipizzaners, a breed which mixes Spanish, Arabian and Berber ancestry. The horses in the school today can trace their bloodline back to 1750 and the first Habsburg stables. Originally Lipizzaners came from Slovenia, but today the school has its own stud in the village of Piber in western Austria. About 50 foals are born each year but only the top three to five make it to the school. The young stallions that show the best character and jumping ability are selected to come to Vienna and are taught the complex jumps and moves that make up classical dressage. It’s a long process – taking over six years – and only a few can master the most difficult moves. But that’s nothing compared to the 10 plus years it takes to train the riders. 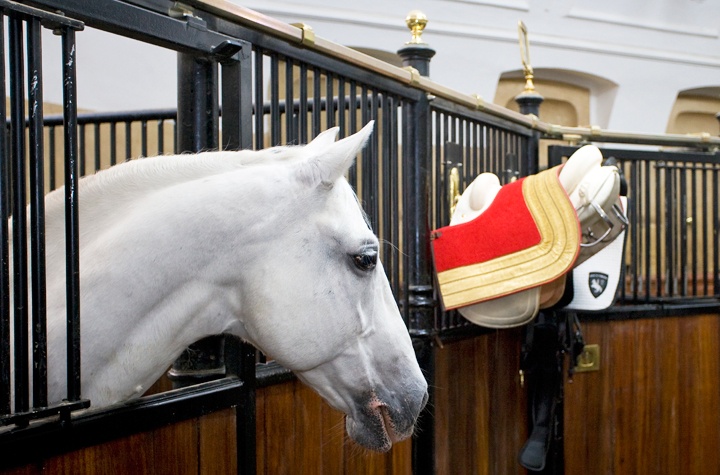 Until 2008 only men were allowed to become riders at the school, but since then it has been opened up to women too, so there are female riders currently in training. Most of the riders start their training around the age of 15 and surprisingly you don’t need any riding experience. The school has its own techniques so it’s better if riders haven’t picked up any bad habits to start with. They’ve also got to be fluent in German and the right height, as the horses are smaller than most dressage horses. New riders start off as an Éleve or apprentice and spend four years learning how to ride. Then if they are good enough they become an Assistant Rider and get put in charge of training up a horse, and can eventually become a Rider. The training is tough and around 80% of the trainees drop out in the first few years. 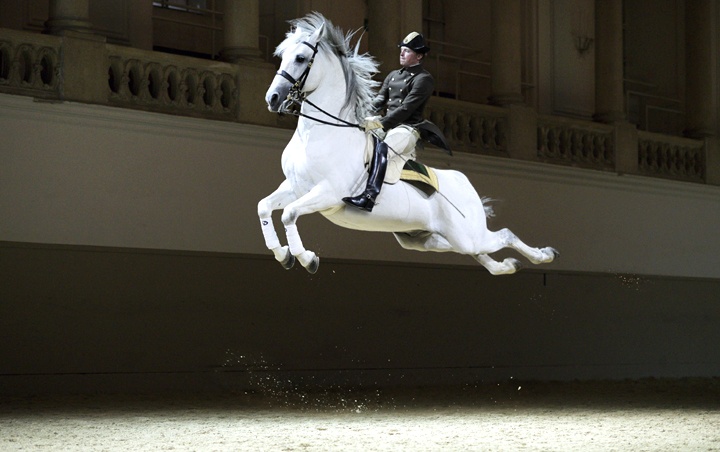 Although most of the horses are away over the summer, we still saw a few on our tour around the stables. Lipizzaners are known for their pure white colouring, so the biggest surprise was that some of the younger horses were dark grey or black. Apparently they are born black and get lighter as they get older, so by the time they start performing they’re completely white. By then their years of training mean the horse and rider seem to come together as one – you can’t see any signals between them and it seems like the horse can read the rider’s mind. It’s almost like a ballet with the horses dancing to the music and it looks effortless, but like a lot of things it takes a lot of work to make it look so easy. 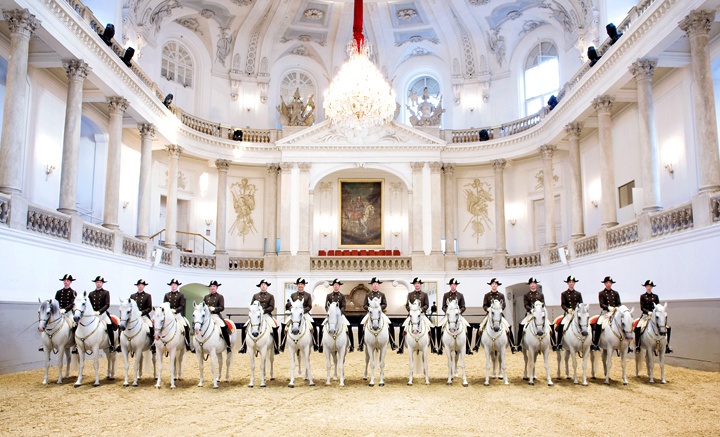 The Spanish Riding School is in part of the Hofburg Palace in Michaelerplatz. Guided tours run most days, costing €18 per person (€10.50 for students/seniors) and last around an hour. Its a good idea to book in advance as they can be busy, especially in summer. During the winter season there are usually performances at least a couple of times a week, costing from €25 (for a standing ticket) to €217 (in a box).

If you can’t get tickets for a performance or are on a budget, you can also go and watch the horses’ morning exercise to music between 10am and noon for €15 (discounts for seniors/children and with a Vienna Card). In July and August there aren’t any main performances but you can go and see a ‘Piber Meets Vienna’ show featuring some of the young horses from the stud, with tickets costing €12–€45. 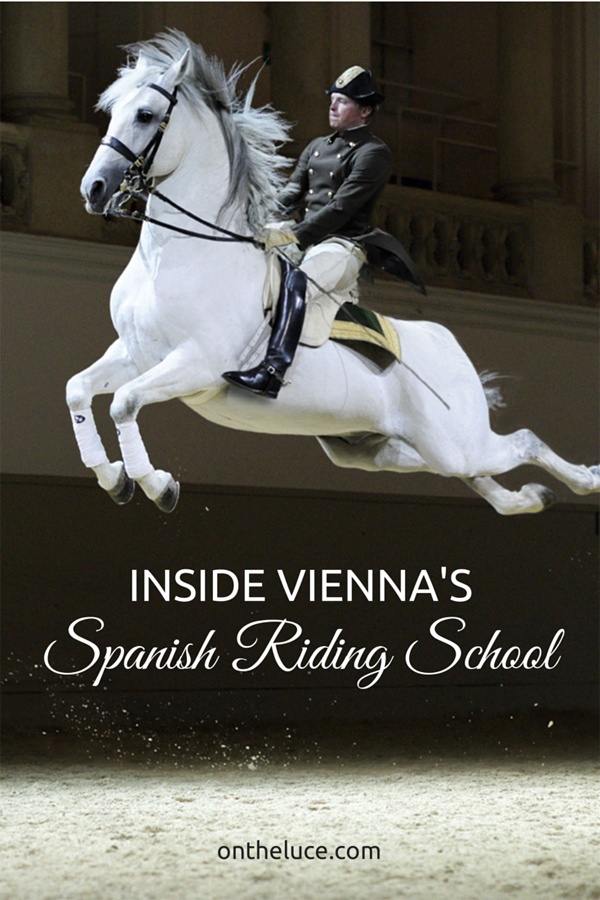 Thanks to Tourism Vienna for supplying me with complimentary entry. All views and opinions are, as always, my own. Photos of horses and riders © Spanish Riding School.

Very good information! Love it! I didn't know about this riding show. Will look into it for my trip there :D

Great – hope you enjoy it!

I'd love to see these horses in action. So much grace and beauty - quite breathtaking I'd imagine.

As someone who was pretty pleased if I could make a horse go in a straight line it's amazing what they can get them to do!

I saw them when I was a child and it made a huge impression on me. Then my parents took my daughter to see them last year (not in July!) and she loved them too. Vienna is fabulous; such a beautiful city with so much to see and so much history too.

That's so lovely that it's been passed on through generations of your family! Vienna certainly is beautiful, it almost felt like walking into the pages of a fairytale in some areas.

Love this post!! I've been dreaming of this place since I was a kid and had the horse-obsessed phase as well. Hope to go there myself one day! In the mean time, I really enjoyed your post :-)

Thanks so much, it really inspired me to get back on a horse sometime again (though there's no way I'd be anywhere near as graceful!).

Wow, this is fascinating stuff. I absolutely love finding out about different traditions. It's interesting to hear that the riders aren't previous trained, it would be great to interview some of them!

I was really surprised about that too – I though you'd have to be an expert rider but apparently the technique is so different from most riding that it's more of a hindrance than a help.