Normally when I’m on a city break I don’t spend much time in my hotel, and all I really need is somewhere clean, comfortable and central to sleep. I’ve tried the big brands – Premier Inn, Ibis, Tune Hotels, Z Hotels – with varying degrees of success. But now a new option has arrived in Britain from Germany – Motel One. From the name you might picture a roadside hotel somewhere in the middle of nowhere USA. But what you actually get is a city centre budget hotel with a stylish, design-focused edge. The company have 53 hotels across Europe’s major cities, with five in the UK so far and more on the way. The Motel One Edinburgh Royal was the country’s first UK hotel, so on my recent trip to Edinburgh I decided to give it a try.

The hotel’s entrance and lounge area

You couldn’t get much more central than the hotel’s spot next to Waverley station – we were checked in within 10 minutes of our train pulling up. There’s also an airport bus stop across the street on Waverley Bridge if you’re arriving by air. The hotel is right on the edge of the Old Town, so you have the Princes Street Gardens and New Town in front of you. And behind you it’s only a short walk to the Royal Mile – though this being Edinburgh there is a big hill on the way. The Scottish National Gallery, Real Mary King’s Close and Edinburgh Dungeon are right on your doorstep and you can walk to almost all of Edinburgh’s other attractions, along with plenty of places to eat and drink. The Royal is actually one of two Motel Ones in Edinburgh; the second is very central too, on the other side of the station along Princes Street.

The hotel has 208 rooms across three different categories – the Basic (with a view of the roof or the next-door buildings), the Classic and the Room with a View (with a view across the city). We had a Classic room on the seventh floor which looked out over the Princes Street Gardens. Despite the station being so close, it was very quiet, with triple glazing and blackout curtains to help you get a good night’s sleep. The room came with a queen-size bed with Egyptian cotton bedding, flatscreen TV, desk, armchair, kettle, UK and European plug sockets, and a decent hairdryer (i.e. not attached to the wall or with a button you have to hold down!). There was also some clever storage tucked away, like the hanging rail behind the bed’s headboard. And the en-suite bathroom was a proper room – rather than those exhibitionist style glass-walled cupboards you get in a lot of budget hotels – with a powerful shower and plenty of towels.

The hotel doesn’t have a restaurant, but you don’t really need one as Edinburgh is overflowing with great places to eat and drink (I’ve not had a bad meal in the city yet). What it does have though is a café-bar where you can get drinks as well as light snacks like toasted sandwiches (they also do gluten-free versions). This is also the area where breakfast is served in the mornings. Breakfast is continental and isn’t included in the room rate. It costs an extra £9.50 extra per person but there is plenty of it – with cereals, pastries, yogurts and fruit, as well as German-style meats, cheese and eggs, plus bottomless tea, coffee and juice.

One of the lounge’s seating areas

The hotel is converted from several historic buildings, including the former printing press of Edinburgh’s Evening News. Because this part of the city is a World Heritage Site it has kept a lot of original features which give character. But what makes it a cut above the usual budget hotels is the big communal lounge area on the ground floor, so you have somewhere else to hang out other than in your room. Each hotel is decorated differently and takes inspiration from the location in its design – so in Edinburgh we had a specially designed tartan using Motel One’s signature turquoise colour. It’s refreshed every five years too so it doesn’t get tired. There was an open fire, tables made from whisky barrels, quirky chandeliers and Arco floor lamps in amongst lots of different seating areas. The bar stocks a huge range of whiskies and was buzzing with people when we stopped off for a drink on our way back from a night out.

The lounge and bar

Rooms at the Motel One Edinburgh Royal start from £59 a night for a Basic room, £69 for a Classic room and £79 for a Room with a View, not including breakfast. There’s a minimum stay of two nights on Saturday nights and also on Friday nights during the festival in August. 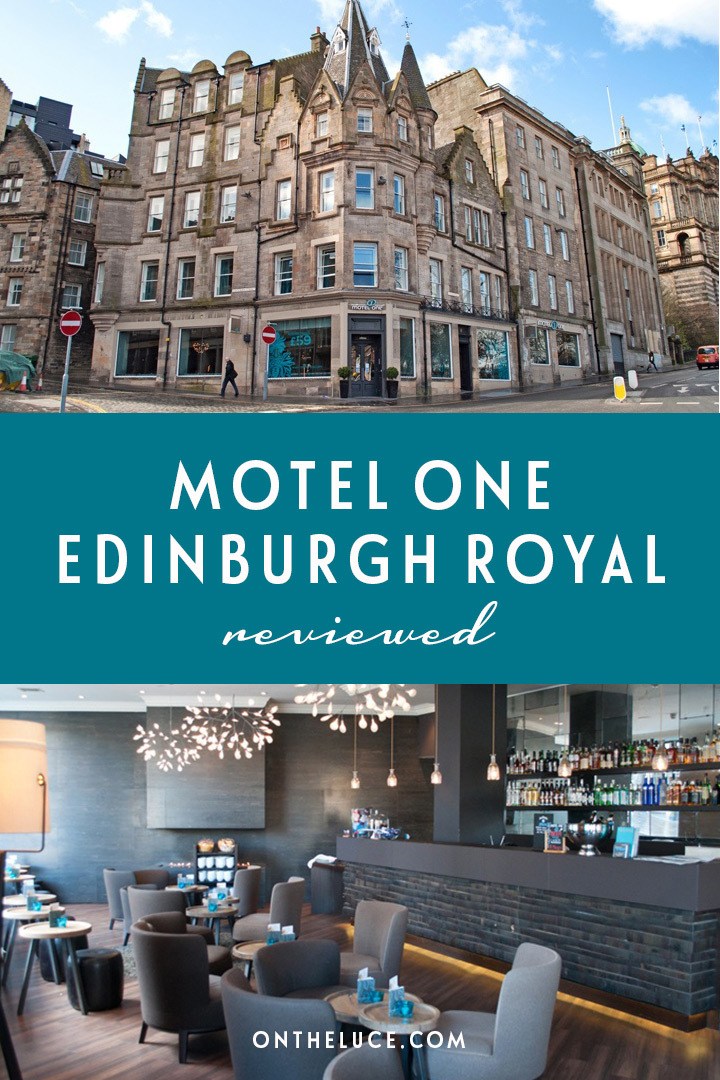 Thanks to Motel One for providing me with a discounted stay. All views and opinions are, as always, my own. This article contains affiliate links, where I get a small commission at no extra cost to you.

Looks like Motel One is something to keep an eye out for, to see if it is an option for my future trips. Thanks, Alastair

There seem to be more and more of them around so definitely worth checking out.

I did quite a bit of research on Edinburgh hotels for colleagues a few months ago, and Motel One was definitely a great find!! It sounds like you had a really lovely stay there :)! x

Thanks, yes it was perfect for what we needed – very central, comfortable and so nice to have the lounge area to relax in too.

This looks lovely - much nicer than you'd expect for such a bargain price. This is definitely going on my radar....

It was a real bargain, I'll definitely look out for them for other city breaks now.

Thanks for the review, Luce. There is something that I love about the fireplace TV setup, it always gets me. It also always helps when the hotel is in a good location.

Location is so important for city breaks! I do love a fireplace TV too, somehow you almost feel warmer just by looking at it.

That is identical to one in London - I have stayed at that a few times - great value for money. Motel One is a great brand.

I'll have to look out for the London ones next time – I'm always on the lookout for good (and not extortionate) places to stay when I'm in the city.