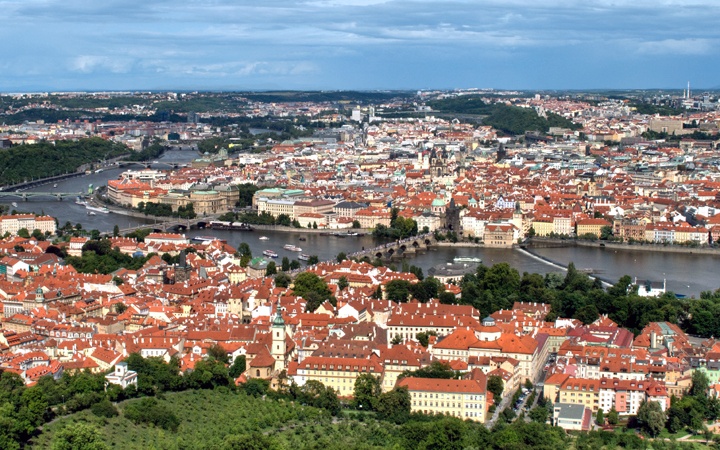 Perched on the top of Petrin Hill overlooking Prague, you might spot what looks like a miniature version of Paris’ Eiffel Tower. The Petrin Lookout Tower might not be quite as imposing at a diminutive 60 metres high compared to the Eiffel Tower’s 324 metres. But once you add on the height of the hill it sits on, then at the top of the Petrin Tower you’re 50 metres higher up than at the peak of its French big brother. Two observation platforms in the tower provide some of the best views across Prague. And on a clear day you might be able to see as far as Snezka, the Czech Republic’s highest mountain almost 150km away. 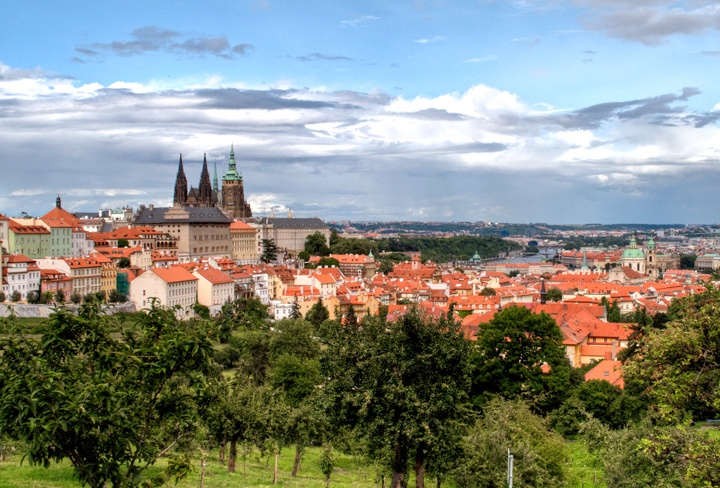 Views across to Prague Castle from the path up Petrin Hill

The Petrin Tower came about after a group of Czech tourists travelled to Paris in 1889 for the World’s Fair. They were so impressed with the Eiffel Tower, which had been built as the entrance-way to the exhibition, that they came home and started raising money to built their own version. And two years later the Petrin Lookout Tower was opened. It was later used as a TV and radio tower but fell into disrepair in the 1970s and was closed off to the public until 1991 when it was refurbished and reopened. 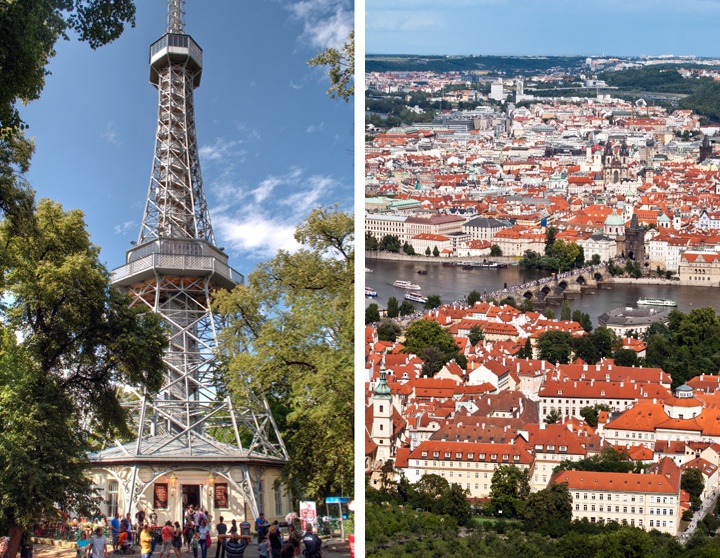 The Petrin Tower, and the view down to the Charles Bridge from the top

To get to the tower you first need to get to the top of Petrin Hill. The hill is covered by parks and gardens stretching down to the riverbank below. The easiest way to get to the top is by the funicular railway, which runs from at the bottom of the hill. Or the more scenic way up is by following the paths that wind through orchards and woodland as they loop around on their way upwards. On a sunny weekend afternoon there were plenty of people about, but you can always find a patch of shade under the trees or a bench in the flower gardens to catch your breath. 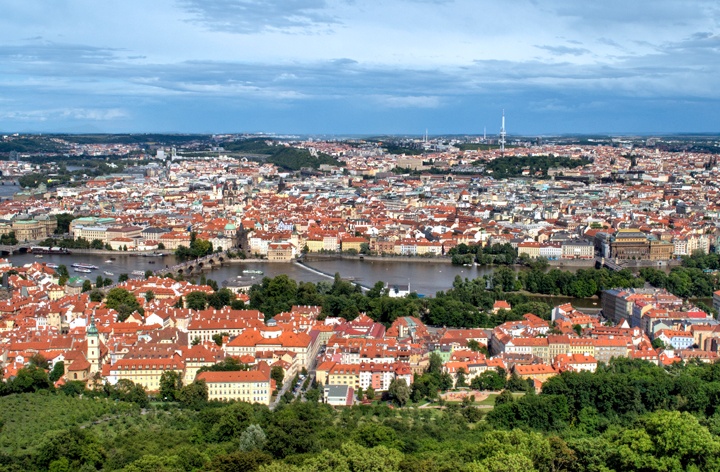 The tower has two spiral staircases that twist their way up the 299 steps to the top – one to go up and one to go down. Or if you’re feeling less energetic (or if it’s too hot, which was my excuse), there is a tiny box-like lift that’ll take you straight to the top. And from there a panorama of Prague stretches all around you – you can see the huge scale of the castle building with St Vitus Cathedral towering above them, the Charles Bridge  packed with a mass of tourists, the UFO-like Prague TV Tower in the distance, and a whole forest of bright red tiled roofs stretching out across the city in front of you. 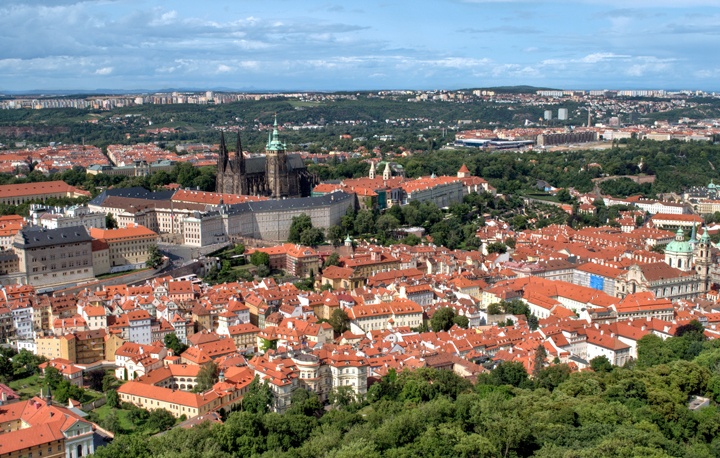 The Petrin Tower is open every day between 10am and 10pm from April–September, closing earlier off-season – at 8pm in March and October, or at 6pm from November–February. Entry costs CZK 120 (about £3.20) for adults and CZK 65 for children/students, plus an extra CZK 60 for the lift to the top. 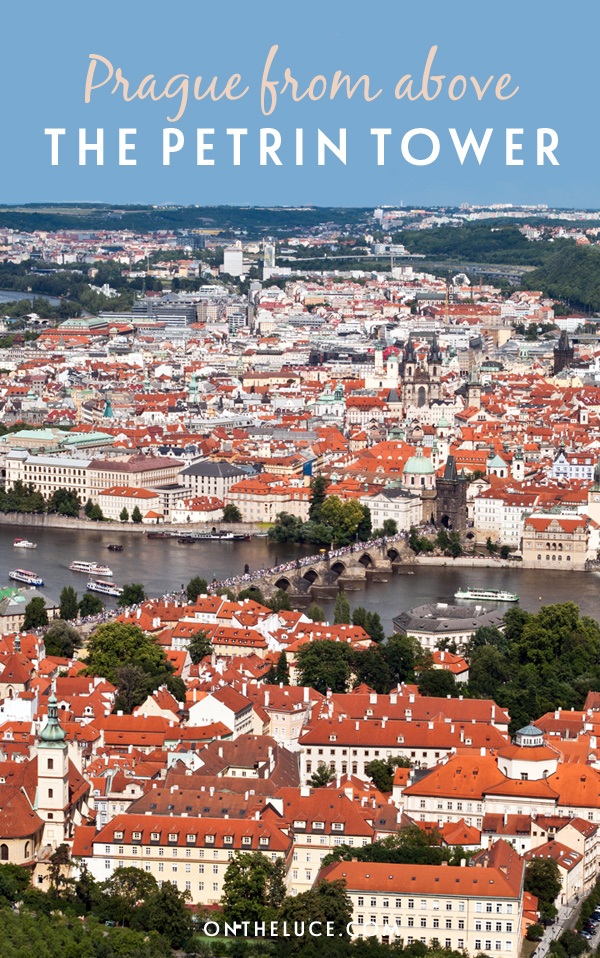 WOW! I keep hearing/reading about how Prague is one of the best travel destinations, and I am truly beginning to see why. It's absolutely stunning!

Prague is so pretty! Definitely one of the most picturesque European cities I've visited. Though it's really popular so very busy in summer – if I went back I'd love to see it covered in snow in winter.

Thanks, I couldn't get enough of those red-roofed views!

Thanks – and great to have you visiting!

Great way to snatch a view over Prague. We still haven't been but might need to make a trip there this winter.

I hear it's beautiful in winter, with the Christmas markets and lots of mulled wine!