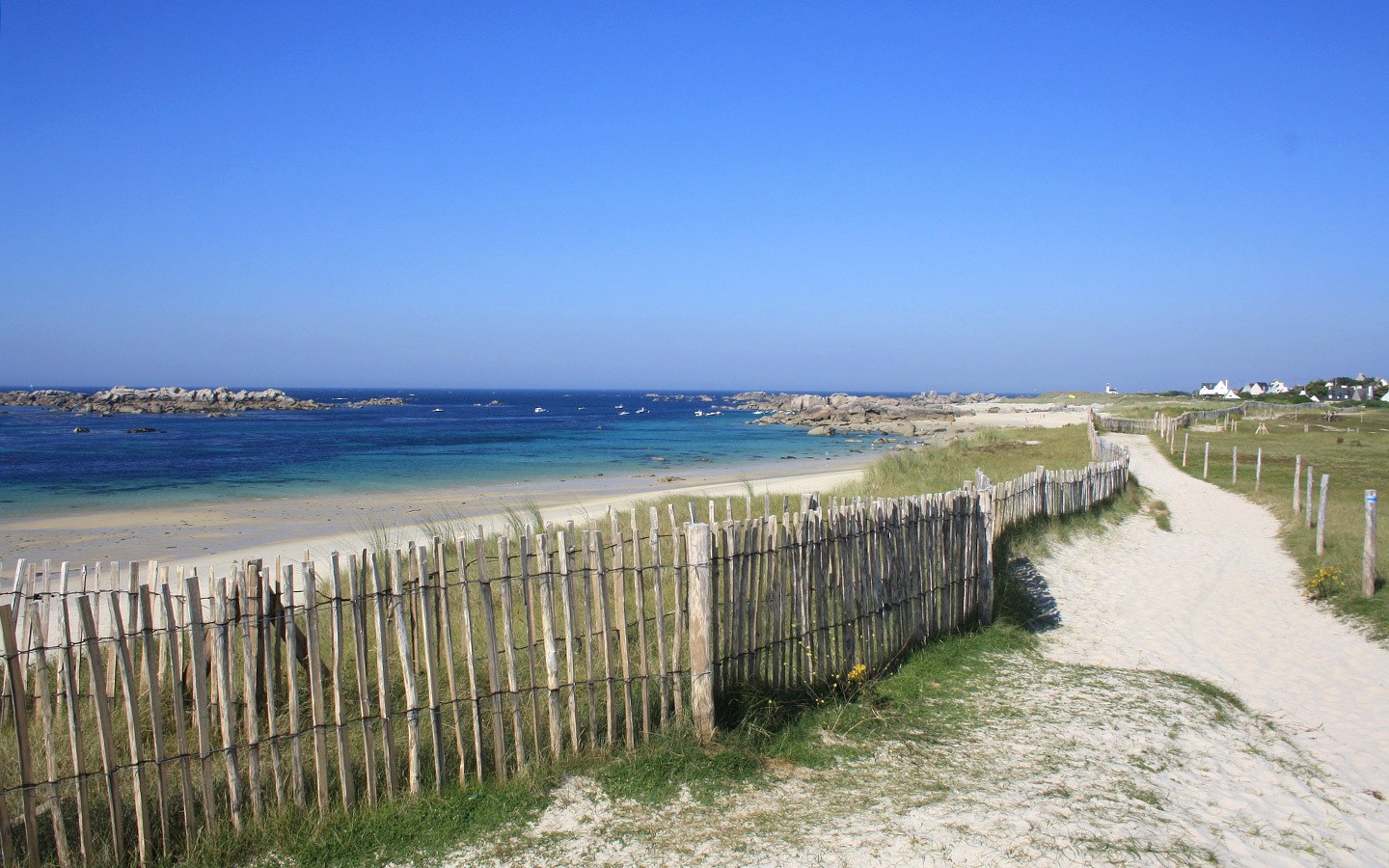 My childhood travel memories all start with France. Driving down to the south coast of England in our old camper van, catching the ferry over the Channel, pitching up at a gîte for the week, spending our days running wild on the beach and stuffing ourselves with cheese and pastries. There are lots of great memories, and some of the best come from Brittany. This patch of north-west France, where the Channel meets the Atlantic, is France’s version of Cornwall. It even has historic links to Cornish culture back when it was settled by a Cornish princess and known as Cornouaille. Like Cornwall it has miles of glorious beaches, from sandy crescents to rocky coves, bags of history and pretty coastal villages to explore. Granted it might not have pasties or cream teas, but you can’t complain when there are crêpes and buttery galettes instead. So here are four reasons why I loved Brittany as a child – and why I’d love to go back again as an adult. 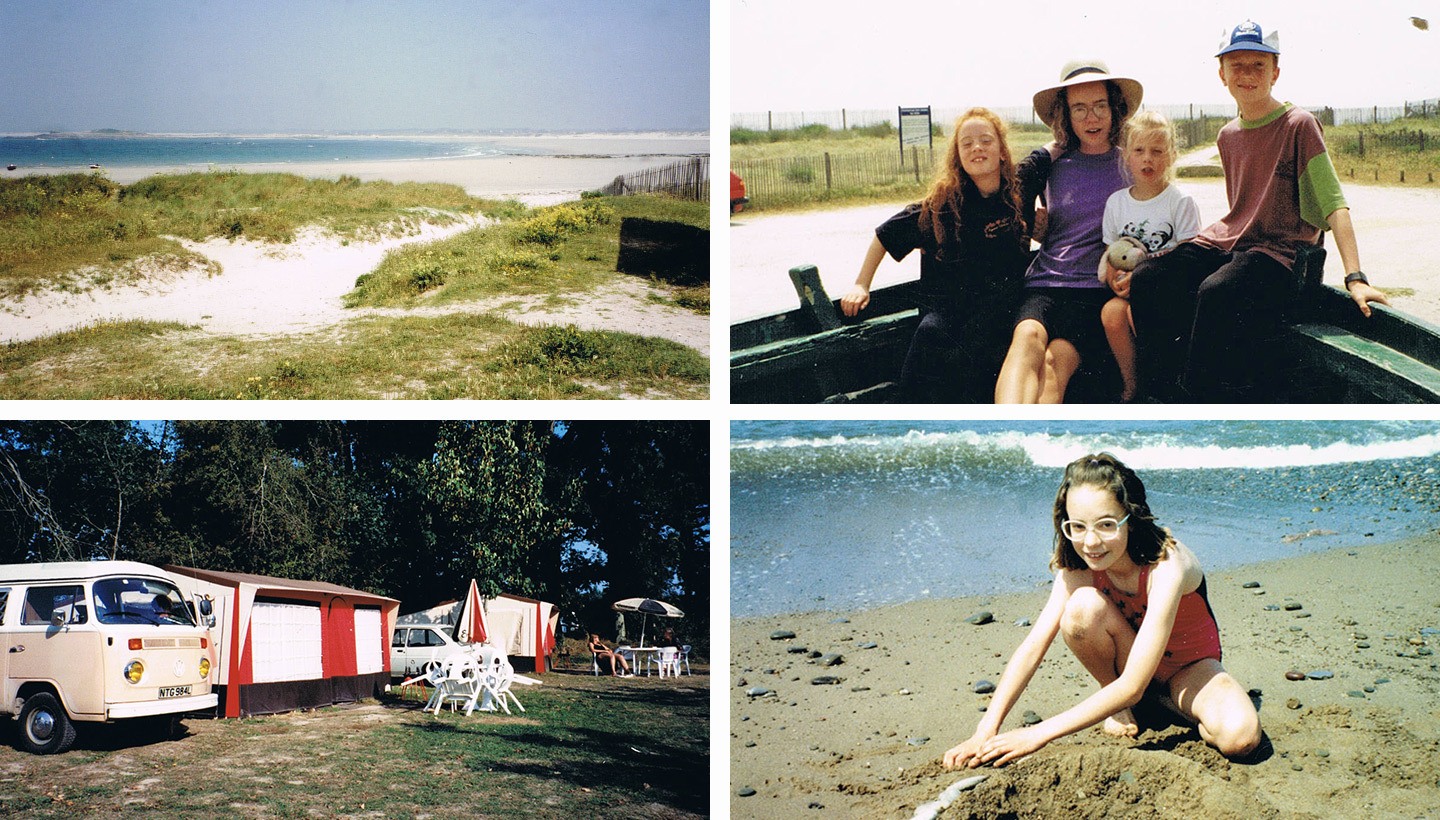 What kid doesn’t love the beach? From digging holes (the classic occupation of any Brit on the beach) and burying my dad in the sand, to rock-pooling and trying to catch tiny shrimp, a lot of our trips were spent on the beach. There were always games of boules, picnics with sandy baguettes and occasionally we’d have turn a groundsheet into a tent to shelter from a shower (we’d never let rain stop a beach day!). Brittany has over 700 miles of coastline so there’s tons of beach space. Some of our favourite stretches of sand were the Grand Plage at Quiberon and the seaside towns of Dinard, Bénodet and Les Sables d’Olonne.

I still can’t resist the beach so I’d definitely be heading back to the coast. But I’d be mixing up the lazing (and hole-digging or course) with a few coastal walks this time. The Côte de Granit-Rose is a stretch of beautiful coastline in northern Brittany that’s made up of an unusual pink granite which you can only find in Corsica and China otherwise. Or there’s the 60-mile path that runs around the coast of Belle Île. This is the biggest of the islands lying just off Brittany’s coast. It’s about 45 minutes by boat from Quiberon and has 60 beaches to explore as well as 100 small villages full of whitewashed houses and lighthouses. 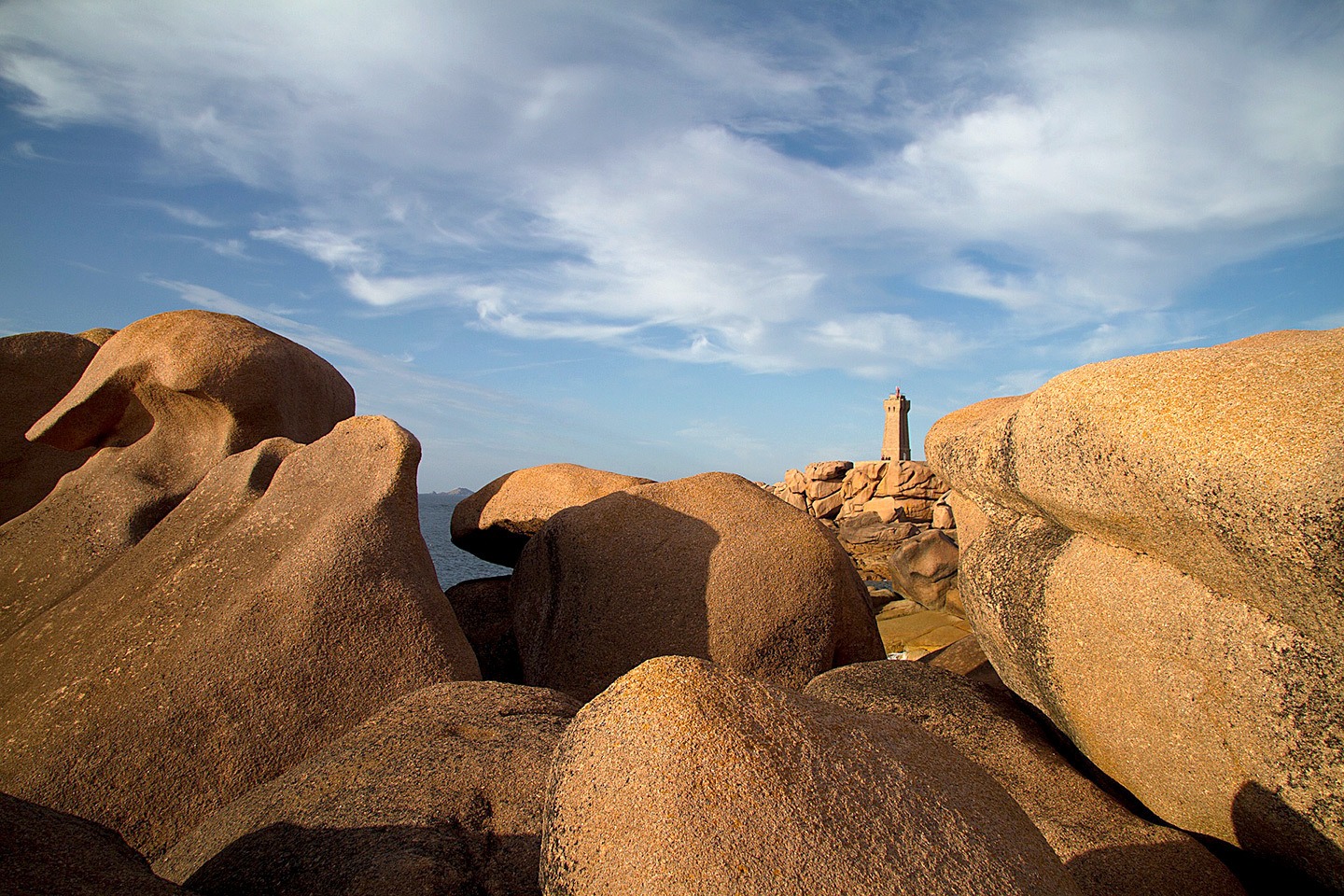 Brittany has a fascinating history – from ancient Celtic tribes and Roman invaders to becoming part of France and its part in the Second World War. I can’t say that I was particularly interested in the historical stories as a child. But what I did like was that it meant there were loads of cool things around to explore. Like the Carnac standing stones – over 3000 menhirs which are older than the Pyramids. Or the medieval castle the Château de Josselin, straight out of a fairytale with its pointed turrets. And the Point Penmarc’h Lighthouse, with 307 stairs you could climb up to the top (minus my mum with her fear of heights).

I’m much more interested in the history of places these days, but still can’t resist exploring somewhere cool. Top of my to-see list is St-Malo after reading a book set in the city during its Second World War siege. It’s an ancient walled town on the coast that’s full of tall granite buildings and used to be home to pirates. But that’s just one of many historic towns and villages to visit. There’s Dinan with its cobbled alleyways and half-timbered houses. Or Quimper with its Gothic cathedral and bridges covered with flowers. 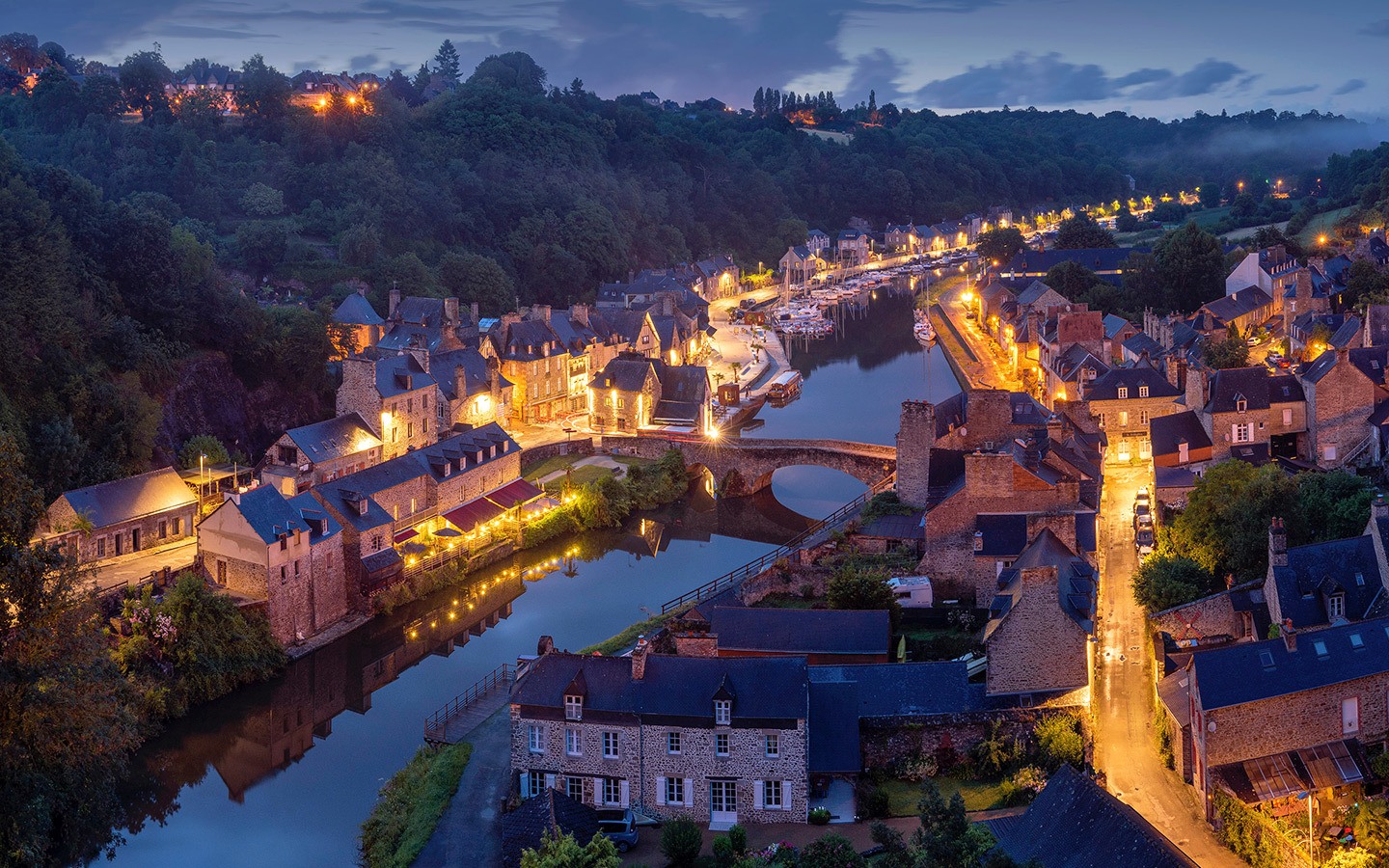 One of the best things about going to France when I was young was always the food. I had (and still have) a bit of an obsession with French markets and supermarkets. All that smelly cheese, piles of fresh seafood, juicy fresh fruit, jars of cornichons and Bonne Maman jam. We’d head to the local boulangerie each morning to pick up croissants and baguettes (which were likely to have the end broken off and the fluffy bread inside scooped out by the time we got back). There were also wafer-thin crêpes covered in Nutella, tasty tiny mussels straight from the harbour and a sticky, buttery Breton cake called a Kouign-amann.

Unfortunately I can’t eat gluten these days so the baguettes and croissants are out. But I can still tuck into a buckwheat savoury crêpe, eat all the cheese I can get my hands on, and feast on local seafood specialities like Cancale oysters, Moules Marinières and Cotriade (a fish stew). Plus I get to drink now! Like the south-west of England, Brittany is known for its cider. And although Brittany isn’t a big wine-making area, the Loire Valley isn’t far away so you can get some great local wines, like their dry, white Muscadet. 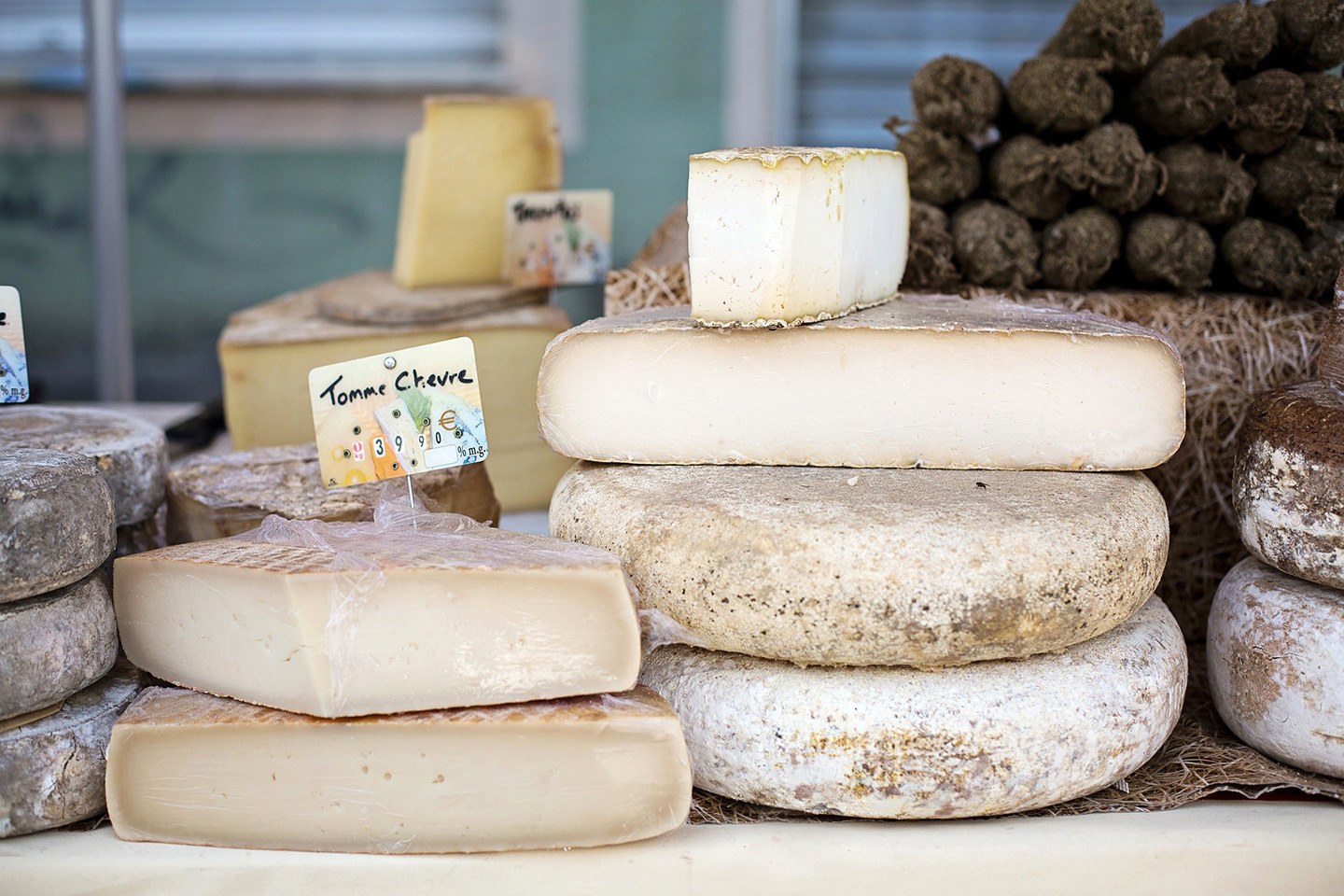 Having three children within six years, you can see why my parents didn’t want to spend hours in the car on holiday (even if the camper van meant we were sat far enough back that they couldn’t hear us fighting!). So Brittany was easy to get to from the UK. The ferry trip was always the start of the holiday, and we’d either do a daytime crossing and sit on deck waiting to spot land, or travel overnight and wake up in a new country. It made it easy to bring everything we needed for the week (see some of the other benefits of taking the ferry as a family in this post from Brittany Ferries). We’d usually stay in one place and do day trips out to local beaches and attractions, before loading up the camper (mainly with wine) and heading home.

Now I’m old enough to sit in the front of the car, I’d love to do a road trip around Brittany. In a week you could easily combine some beach time, a few historic towns, a castle or two and a lot of eating and drinking. Having the car means you can get off the main roads too and discover some of the area’s tiny villages and tucked-away coves. There are some gorgeous driving routes around, like the Crozon Peninsula with its mix of strange rock formations, caves and sandy beaches. Or the scenic town tour through St-Malo, Dinan, Montauban and Rennes. There’s plenty to keep me occupied – however old I might be. 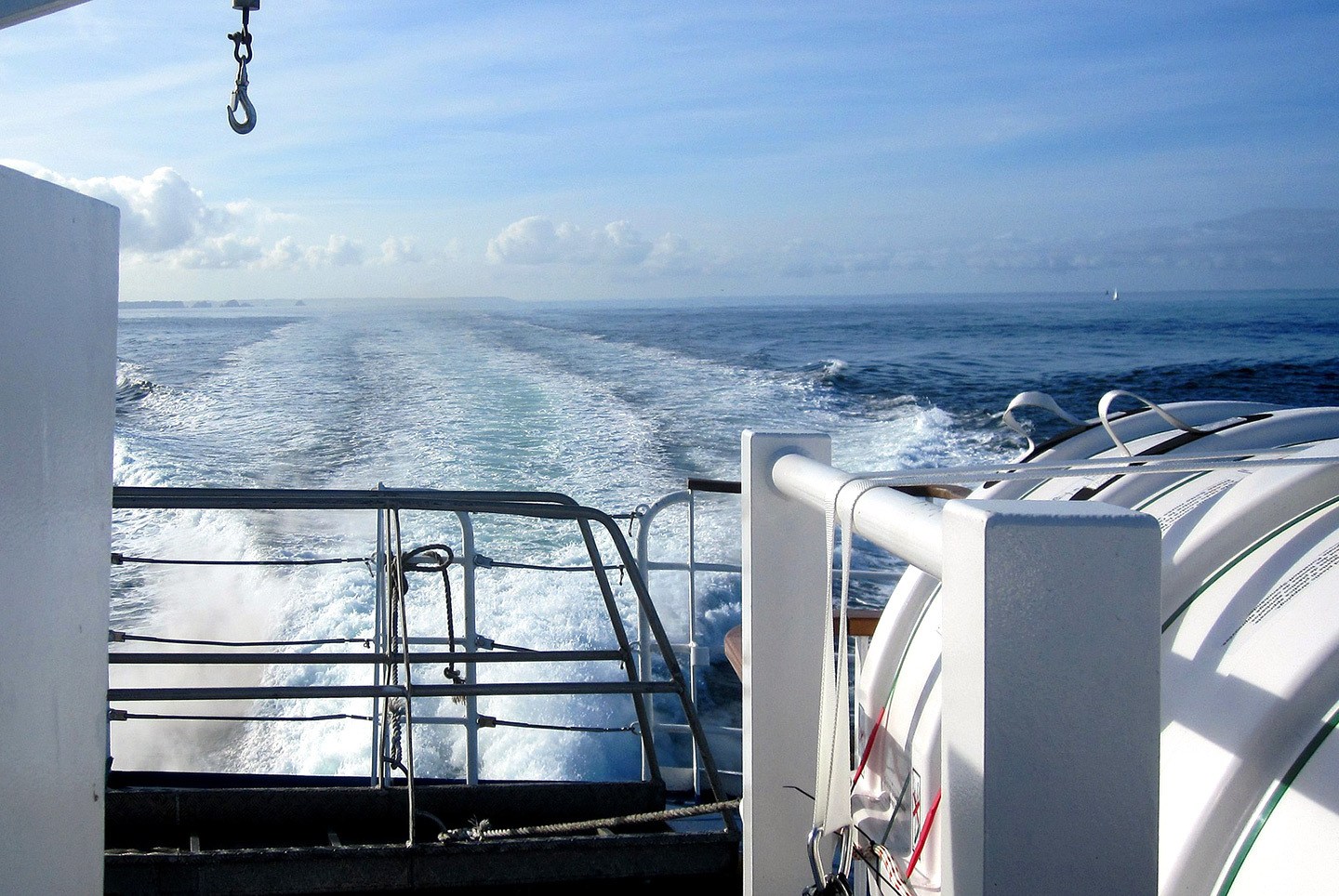 The ferry to France 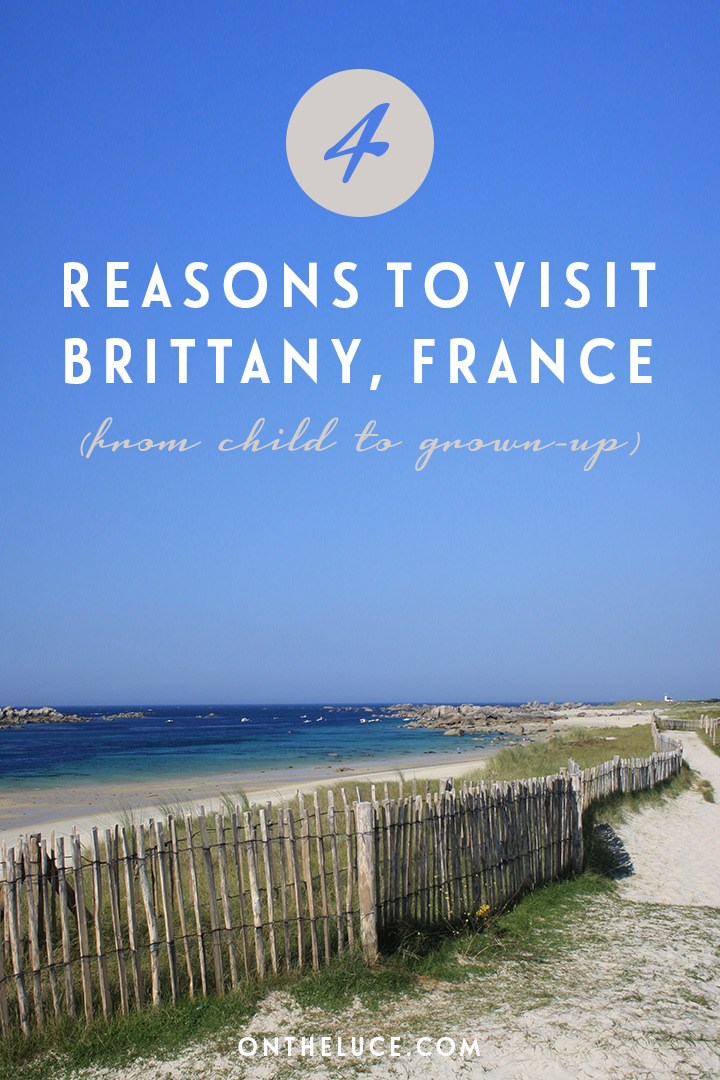 This post is brought to you in association with Brittany Ferries, but all opinions and embarrassing childhood photos are (unfortunately) my own.

We have been to Brittany earlier and totally enjoyed every part of it. This time around looking for a serene village to spend a week with a toddler. Any suggestions you may throw?

When I was a kid we used to visit the Plouescat and the Côte des Sables area – close to Roscoff for the ferry and lots of sandy beaches and shallow waters.

Hi Lucy, We are considering traveling to this region. In the past I almost always went on a trip with my parents to France, but mostly to the south of France. Fantastic times ... It is a shame that you can no longer eat baguettes. They make it nowhere better than there. Maybe they will make gluten-free baguettes someday! Greetings Wim

A gluten-free baguette would be wonderful – maybe someday! Lucky I can still have all the amazing French cheeses though.

great information. I have one more tip for those visiting Brittany. I am a photographer and I was shooting for a beautiful castle built in 1886 that was reopened as a design hotel last year. Château du Nessay is a great place to stay or just enjoy a drink on the terrace. I loved the atmosphere there. You can have a look on some pictures on my website www.adriankilchherr.com

Wonderful post :) I love to travel too. Would love to visit Brittany once. Thanks for the information!

Glad you enjoyed it – and hope you get to visit Brittany sometime!

'Love this post Lucy. Brittany is my favourite part of France!

It's also the place that I taught my son to love oysters. He was 5 at the time and I wanted him to experience the real stuff so I rented a house in Cancale, and we spent everyday at the coast withe the fisherman. It worked!

p.s. I love the picture of you and your siblings with your mother. You look very much like her ;) pps. Did you know that you could also take the ferry to Jersey from St. Malo and on a Saturday night is packed with people going hither and thither!

I have such great memories from Brittany! I've not been to Jersey yet so the ferry sounds like a great idea for a two-destination combo trip!