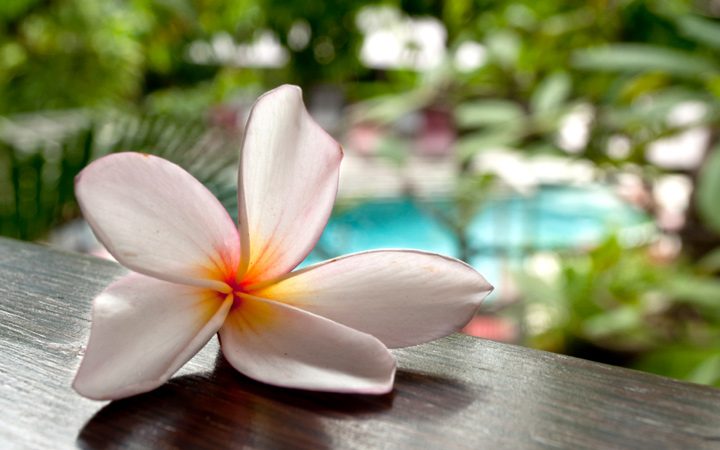 This is the first of a new Reviewed series, where I share some of the best and most interesting accommodation I’ve found in on my travels. You won’t find any five-star chain hotels here, but instead I look for hidden gems which are good value, individual and give a touch of luxury on a budget. And first up is the Bali Hotel Pearl, near the coast at Legian in Bali. After the long flight from the UK I was looking for somewhere peaceful to relax and get over the jetlag for a few days. The stretch of beach from Kuta to Seminyak is home to bewildering range of hotels of all sizes and price ranges. I wanted to be near enough to the beach and restaurants but away from the noise, and the Pearl drew me in with its photos of flower-filled gardens and a pool and balcony that were perfect for retreating to with a book.

North of the brash party town of Kuta and south of the glitzy resorts of Seminyak, Legian is the middle ground. The beaches are quieter and there’s less hassle and party scene than in Kuta, but the prices are still fairly low. The Bali Hotel Pearl is down a quiet side road off the busy main street, Jalan Double Six. Being set back means it’s away from the traffic noise and it’s surrounded by gardens which makes it even more peaceful. The hotel is about a 10-minute walk to the beach, though it’s not the easiest walk along narrow, uneven pavements. There’s lots of bars and restaurants along the beachfront, and a big Bintang supermarket about a 200-metre walk away. 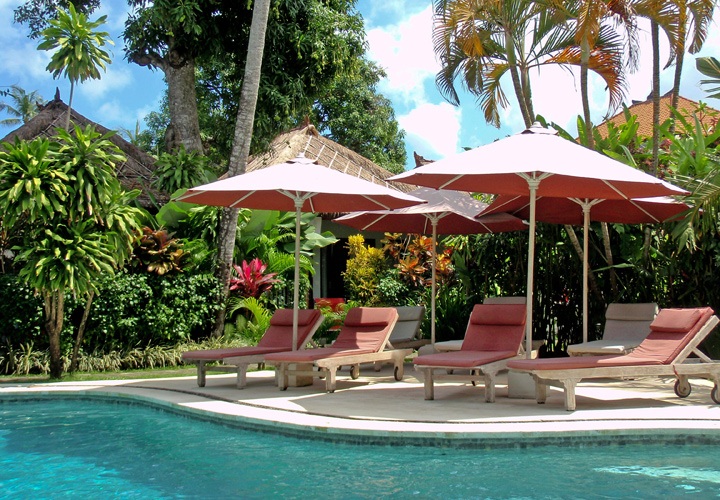 Sun-loungers by the pool

The hotel has 14 rooms, set around a central pool and garden area. I couldn’t get the same room for my four night stay, so spent three nights in a superior double on the first floor and the last night in a ground-floor standard room. The superior room was a really good size, with modern decor with Balinese touches like the cushion fabric and carved lamps. It had a queen-sized four-poster bed with mosquito nets as well as a flat-screen TV, safe, aircon and fridge. The huge bathroom had two sinks and a big shower and was partly open at the top of the walls, which did let a few mozzies in, so make sure to keep the door to the room closed. The balcony overlooking the pool had comfy chairs and was a great place to read and relax with a beer in the evenings. My second room was on the ground floor and was similar but a bit smaller and had a patio outside which was visible from the pool, so not so private as the balconies. 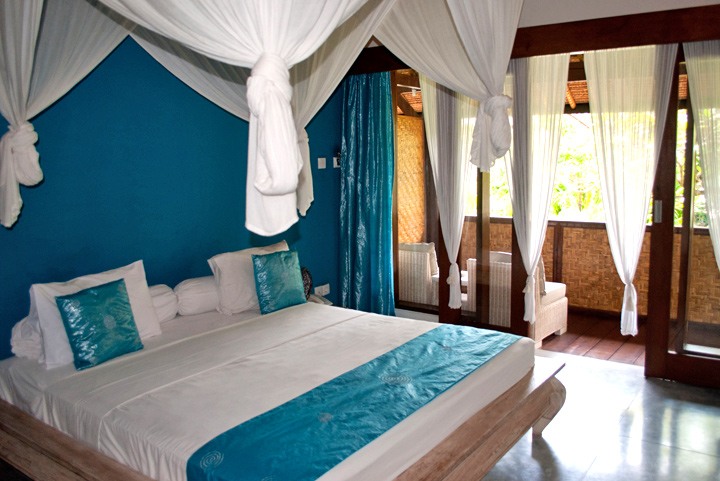 Breakfast is included in the room rate and is served in the hotel’s French restaurant or on your balcony. It’s fairly simple but tasty, with tea or coffee and fruit juice, then a choice of a basket of pastries (pancake, toast and pastry with jam and honey) or eggs (scrambled or omelette) as well as a fruit plate. I didn’t try out the French restaurant (probably not the best place for solo travellers on a budget!) but it has good reviews for it’s high-end food, especially their tasting menu. It’s only open in the evenings and attracts a lot of dinner guests as well as hotel residents, but closes fairly early so there weren’t any noise problems. 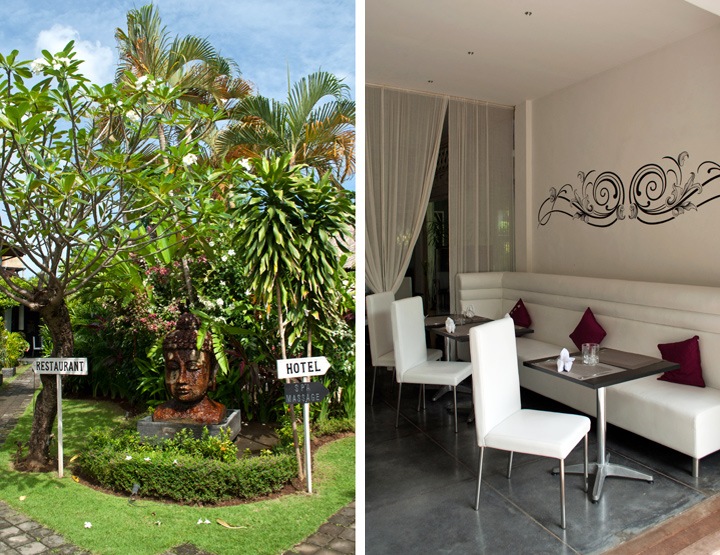 The hotel gardens and French restaurant

The small pool has sun loungers and day beds surrounding it, and was never very busy while I was there. The hotel doesn’t allow children under 15 which helps keep it quiet. The gardens are really well kept with lots of tropical flowers and birds, and the occasional pet rabbit hopping around. There’s also a small spa near to the pool and I got given a voucher for a free 15-minute reflexology (which was more like a food massage but definitely help get rid of some of the the plane aches and pains). The hotel has a security guard on the door in the evenings too which helped me feel secure on my own. 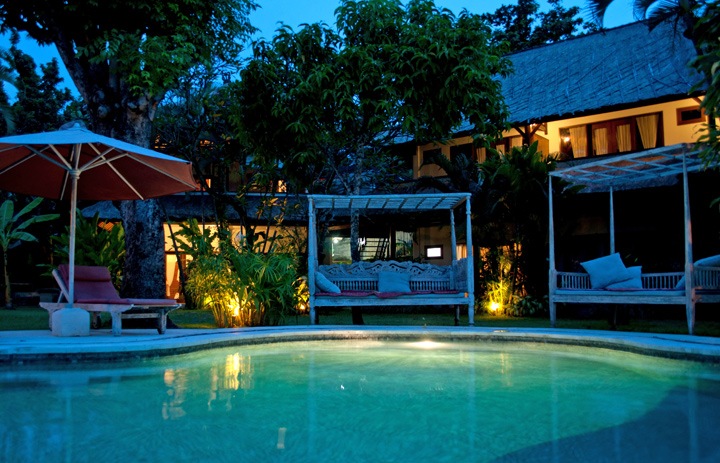 The pool lit up at night

Rooms at the Bali Hotel Pearl (booked in advance via their website) are US$58 a night for a standard room, $64 for a superior room or $76 for a deluxe room, with a supplement of around $10 per night during high season (mid-July to September and over Christmas/New Year). 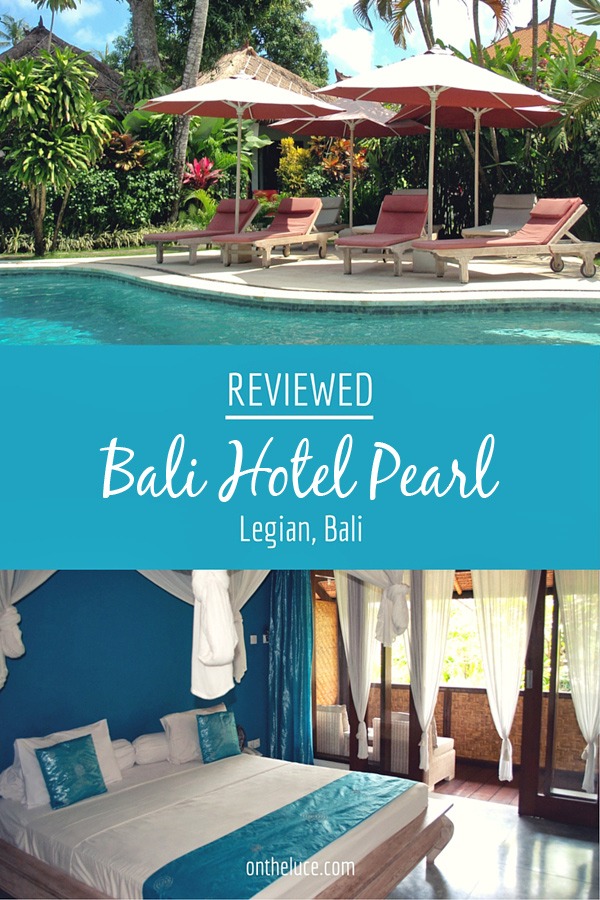