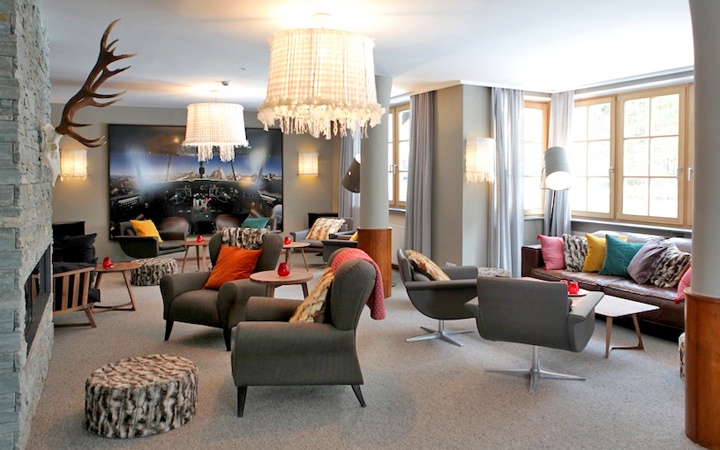 With four of us travelling together on our European rail trip this summer, it made sense to rent an apartment instead of booking two hotel rooms when we were in a city for a few days. But as we only had a couple of nights in St Anton – and one was my mum’s birthday – we decided to splash out on a bit of luxury in the lovely Valluga Hotel. Well I say splash out, but with so many hotels in the area catering for the winter influx of skiers, summer prices crash right down. So we got a night in a luxury spa hotel for under £75.

The Valluga looks like a traditional Alpine building from the outside, all wood and flower-filled balconies. But inside it’s Scandinavia meets Austria, with a few touches of the Balearics. The Swedish owners also run a sister hotel in Mallorca so have brought some of the colours of the Mediterranean to the mountains. It’s full of cute design touches, like the tree trunk coat stands and the walls made up of stacked logs. It’s all very casual and relaxed though and feels a bit like staying at an über-stylish friend’s (very large) house. 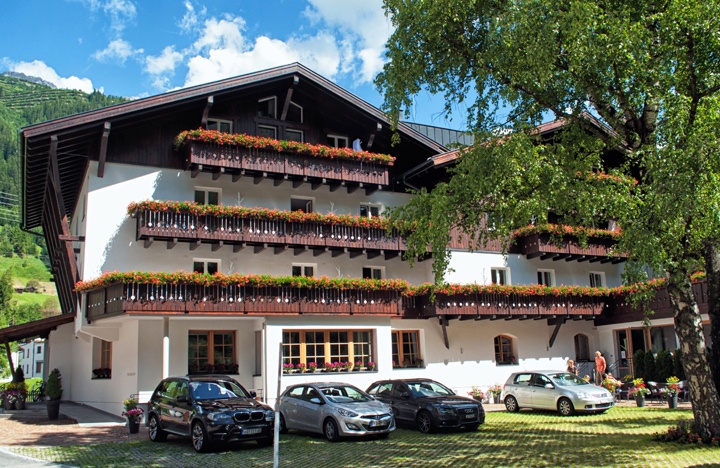 The hotel is on the main road through St Anton, about five minutes’ walk into the town centre. St Anton is fairly small so it’s easy to get around on foot – though if you’re there in winter and don’t fancy the walk in ski boots then the hotel runs a shuttle to the lifts. The hotel has plenty of parking spaces and is less than 10 minutes’ walk to the train station. Although it’s on a main road it’s not noisy, and the rooms at the back have great views up into the mountains. In winter St Anton is one of Europe’s best ski and snowboard resorts, although the slopes are better for intermediates and experts than for complete beginners. And in summer there are 300km of walking routes and 200km of mountain bike trails, as well as climbing and high ropes courses, rafting and kayaking, and a big indoor and outdoor spa and relaxation centre. 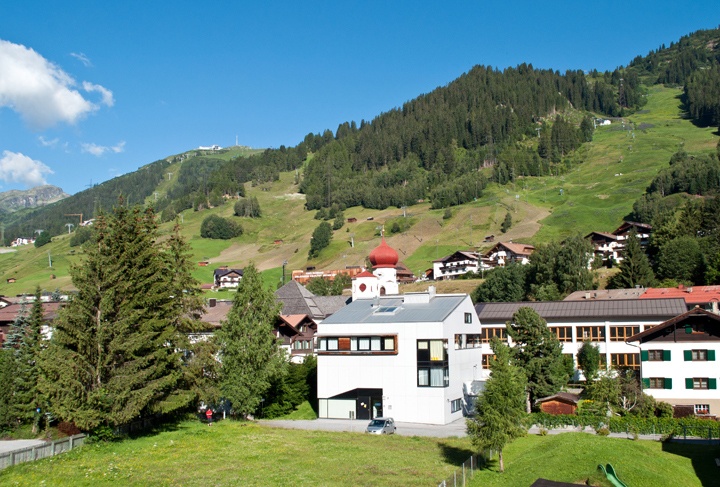 The view of the mountains from our balcony

The hotel has 21 different size rooms – from singles right up to a two-bedroom suite in the loft that sleeps six. Our ‘large double’ had a king-sized bed and a seating area with a sofa, table and chairs. The design is contemporary and smart, but incorporates traditional Alpine features, like the reclaimed wooden panelling on the wall behind the bed, the antler-shaped coat hooks and the furry blankets and cushions that make you want to snuggle up into them. There are also lots of mod-cons like wifi, a vintage-style radio and iPod docking station, flat-screen TV, Nespresso maker and mini-bar stocked with free beers, soft drinks and snacks. The spacious bathroom has two sinks, a big walk-in shower and separate toilet, and came well-stocked with toiletries, robes and slippers. Most rooms also have a balcony so you can sit and look out over the mountains (so much better in summer as it’s always too cold on ski trips). 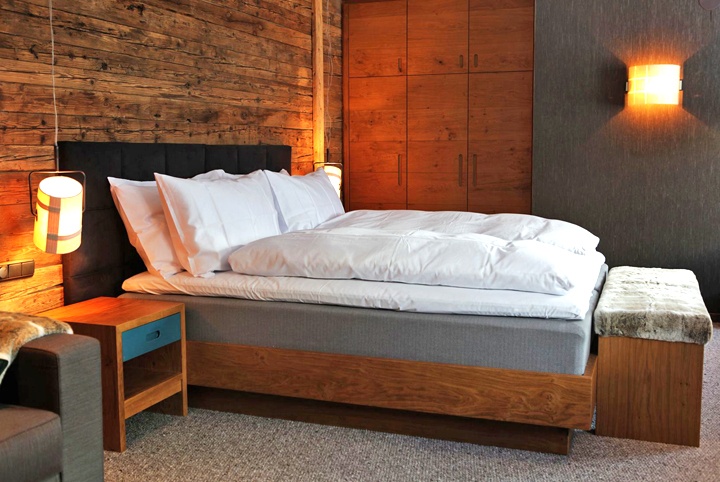 The inside of a large double room

Breakfast is included in the room rate and served in a colourful conservatory dining room. There’s a big buffet-style selection with fresh fruit and juices, cereals, meats and cheeses, pastries and breads. You can also order eggs cooked to order along with sides like bacon, sausages and mushrooms. The hotel also has a restaurant and in winter it’s usually half-board with a nightly four-course dinner included in the room rate. In summer you can choose between half-board or bed and breakfast, so we ate in one night and in town the other. The menu only has a few choices with mix of international dishes, but is all really well-cooked with lots of fresh ingredients. There’s also a good wine list, but it was fairly pricey, so if you want a cheeky glass on the balcony then there’s a Billa supermarket just a few minutes away. 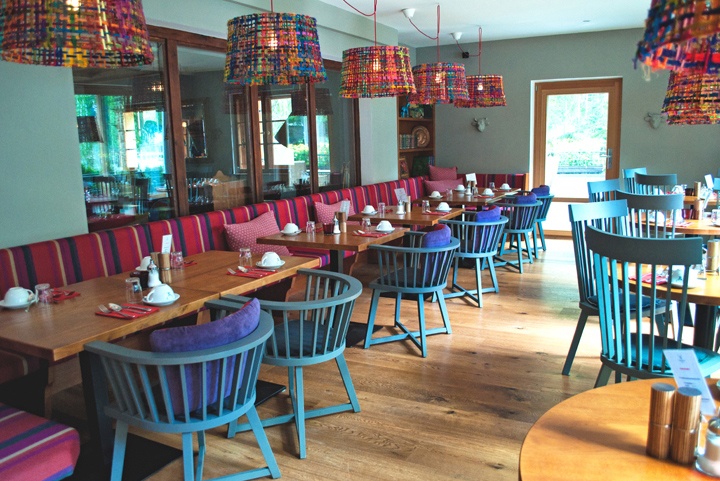 The breakfast room at the Valluga Hotel

The hotel has plenty of communal areas if you don’t want to hang out in your room. There are a couple of lounges – one with sofas and chairs set around a big fireplace, as well as a couple of computers for guests to use, and the other with a pool table – as well as a bar. The hotel has a stock of board games and there’s also a library of DVDs you can borrow to watch back in your room. On the lower ground floor there is a decent-sized swimming pool and spa area. The pool has different jets and jacuzzi beds (though it was a bit chilly to relax in for long) and there are also saunas, steam rooms, a relaxation room, gym and treatment rooms where you can book massages and treatments. If you’re there in the winter, there’s also a ski storage and drying room, and during summer the hotel runs free guided walking tours. 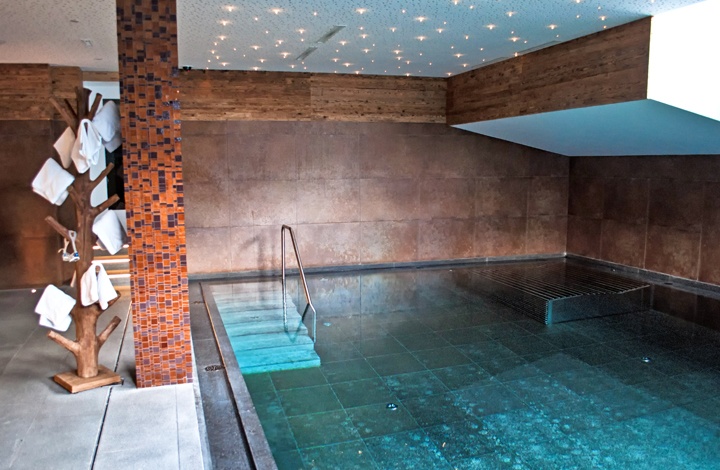 The pool and spa area 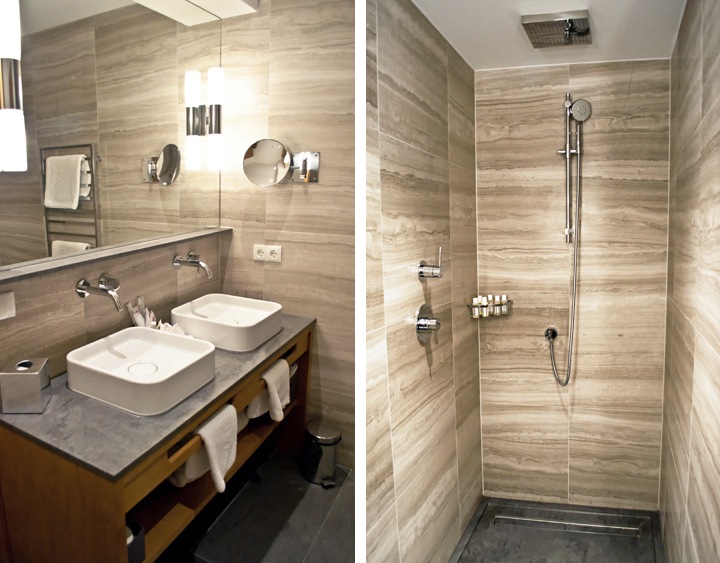 Our bathroom and shower area

Rooms at the Valluga Hotel range in price through the year. During the ski season, standard double rooms range from €255 (at the start or end of the season) to €530 (for a weekend over Christmas or half-term), including breakfast and a four-course dinner each night. They also offer weekly packages. In summer the prices drop way down, with standard double rooms costing €90–€130 per night bed and breakfast. You get a St Anton Summer Card included which gives you a day’s free lift pass, spa entry and other activities. 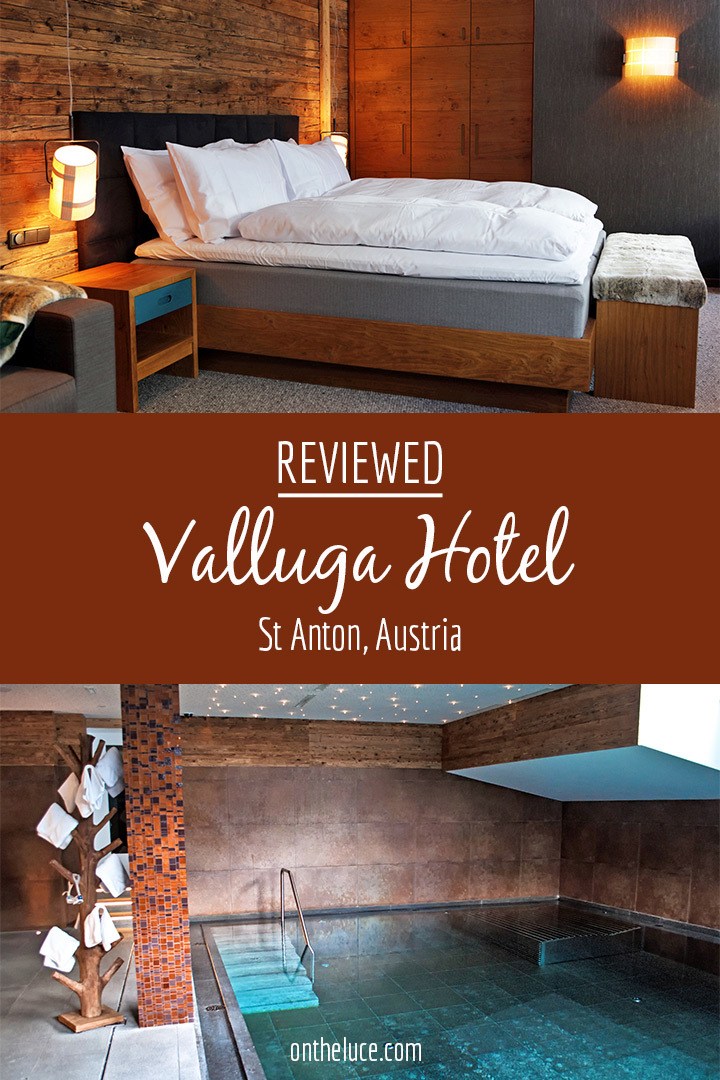