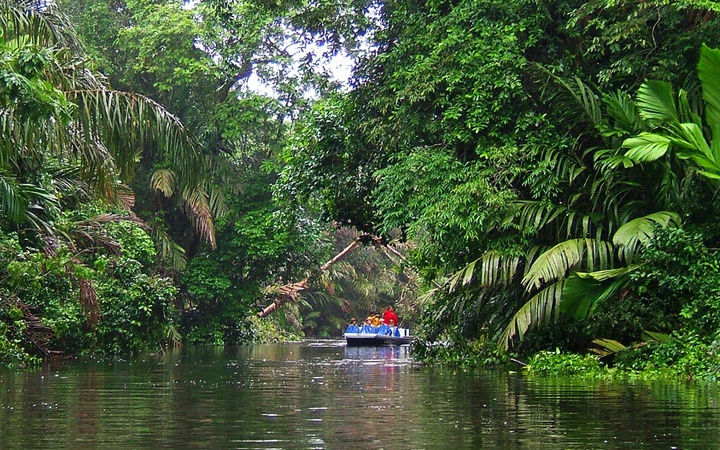 After two long days of travel, through trains, planes, buses and boats, I had finally arrived at my first stop in Costa Rica – Tortuguero National Park. Named after the turtle, or tortuga, it’s one of the most important nest sites for endangered species like the Green, Hawksbill and Loggerhead turtles. It’s also home to a huge range of other wildlife, with 300 species of birds, 110 types of reptiles and 50 different amphibians. But for us non-amphibious visitors, the fact that Tortuguero is surrounded by water on both sides – with the Caribbean sea on one and a lagoon on the other –  means the only way to get to or around the park is by boat. 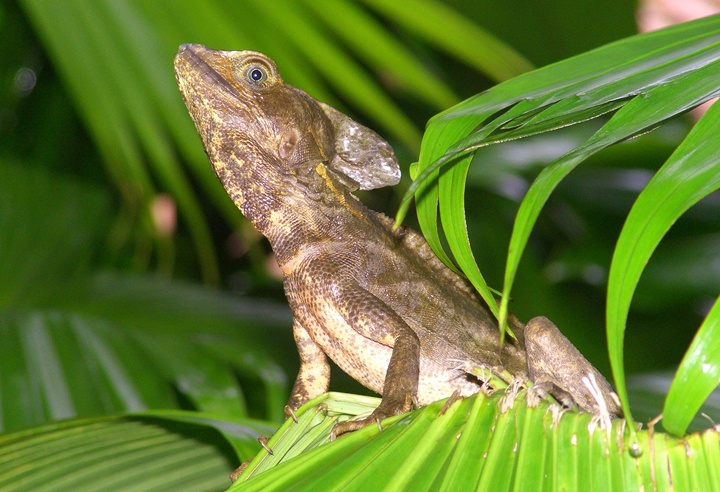 A lizard amongst the jungle greenery

There’s actually more water than land making up Tortuguero National Park, with around 52,000 hectares of water and versus 31,000 hectares of land. A network of canals and waterways are the park’s equivalent of roads and the only way you have to get around and explore is by boat. We blew away any remnants of jetlag with a blast along the park’s main canal in our lodge’s speedboat – great fun but probably not that conducive to spotting any wildlife. So we slowed right down and turned into one of the smaller waterways running off the canal, a narrow passageway overhung with leaves the size of umbrellas, dripping with rainwater. 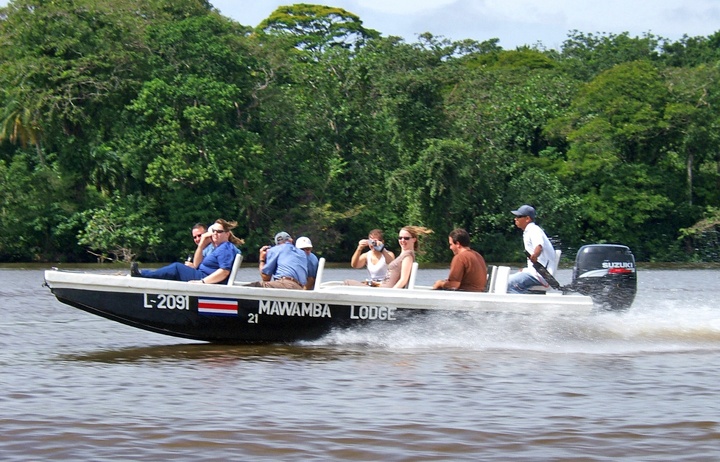 On a speedboat through the canals of Tortuguero

Tortuguero is one of the wettest places in Costa Rica, with over six metres of rainfall falling on the park each year. But even by local standards the three weeks before we arrived had been a bit extreme. A constant steady rainfall had the canals straining at their banks, though it had helped to make the jungle the lushest and greenest I’d ever seen. But halfway through our first morning the sun finally reemerged. The jungle’s tropical flowers soon started to open up and the wildlife came out to soak up some much-needed rays. 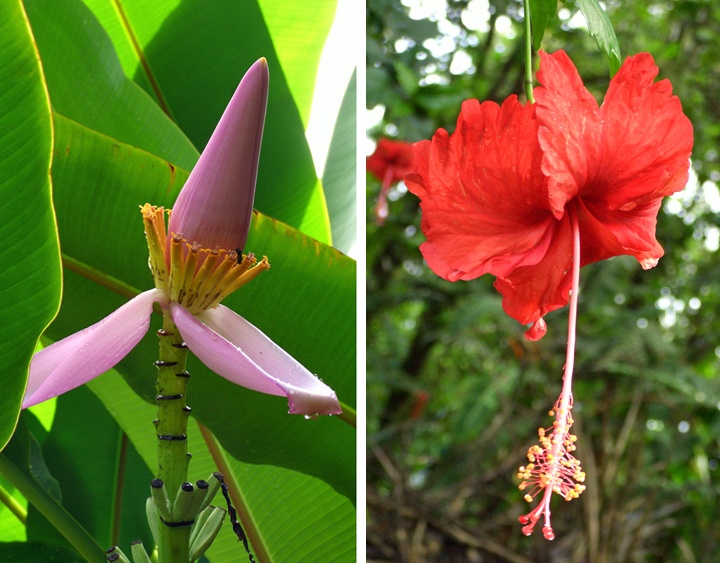 The tropical flowers come out as the rains stop

The park’s freshwater canals are home to seven different species of river turtle. They’re less rare than their saltwater cousins – though I only managed to spot one, basking in the sun alongside a caiman, a kind of wetland crocodile. There were also capuchin monkeys jumping through the trees and colourful birds like toucans, parrots and kingfishers darting about overhead. The end of the rains had brought everything out from hiding. Though unfortunately this didn’t include the shyest of the park’s inhabitants – you have to be very patient (and lucky) if you’re going to spot an elusive jaguar, cougar or manatee. 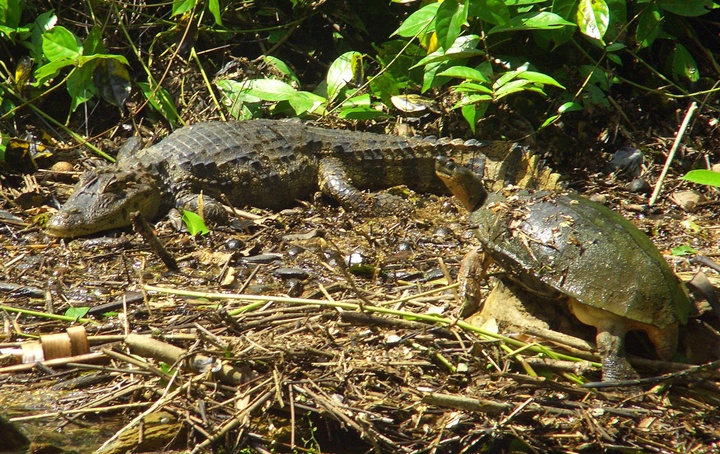 A caiman and turtle soak up the sun

Away from the freshwater waterways, the beaches along the Caribbean coast are where you can see the area’s endangered sea turtles. They lay their eggs and nest in the sand all along the wild coastline here from March to October. I was there in November so missed the hatching, but earlier in the year you can take a guided tour of the beach at night to watch them breaking out of their shells. Otherwise all there is to do in Tortuguero at night is watch the sun set over the lagoon and soak up the sounds of the jungle all around you. 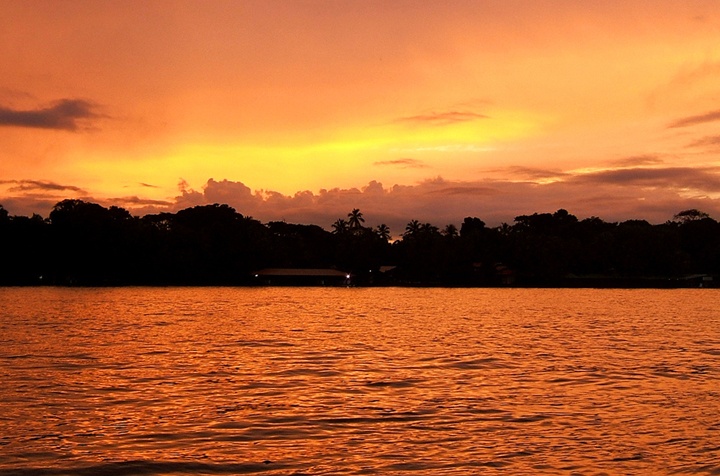 Sunset over the lagoon

We stayed at Mawamba Lodge, where a three-day, two-night package costs US $331 per person (sharing a twin/double room), including return transfers from San José, all meals and guided tours. 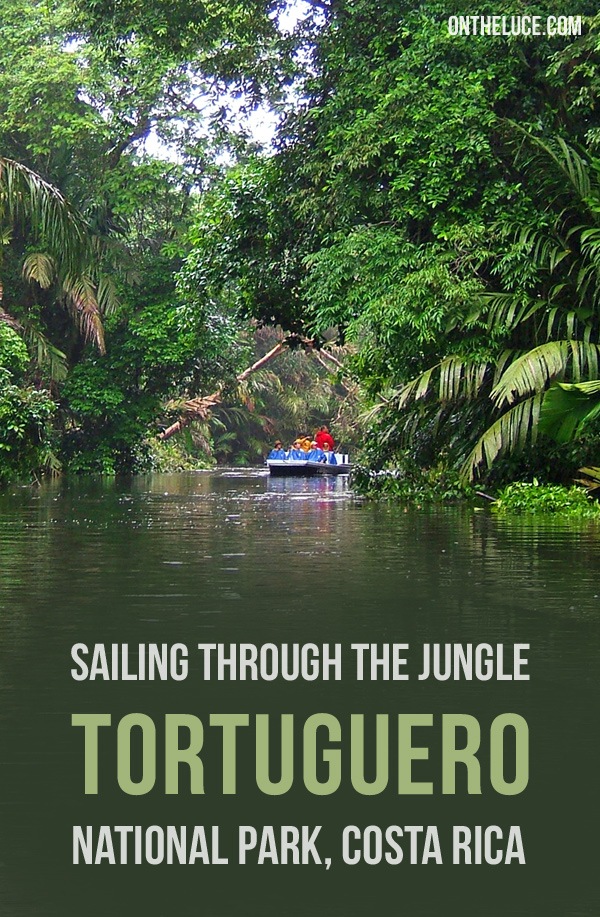 Nice trip. Love the the shot of the lizard :) Did you book a tour or organised it on your own? Was it a budget trip? ;-)

Hi, I did my Costa Rica trip as a group tour with the company Imaginative Traveller as I only had a couple of weeks holiday (and terrible Spanish!), which was one of their budget range of trips. It's not that easy to get around Tortuguero on your own but the lodges (I stayed at Mawamba Lodge) do packages with tours round the canals included.

Just beautiful! I really wanted to go there when I was in Costa Rica last year, but I only had a couple of weeks and chose Drake Bay as my wildlife fix (it was awesome by the way! Go there too if you can!). I finally got to see marine turtles digging nests on the beach in the Galapagos a few weeks ago. It was magical!

I didn't get chance to go to Drake Bay on this trip but it looks amazing too. You're so lucky to get to see the turtles nesting, next time I go anywhere near them I'll try and time it a bit better than I did this time!

It was beautiful – though maybe a bit less so if we'd been there the week before when the rains were torrential!

just love that image too! it jumped out :)

Thanks, I couldn't believe how unscared they were and happy to sunbathe there while we took photos.

It's a great country – such a diverse mixture on landscapes in a small area.