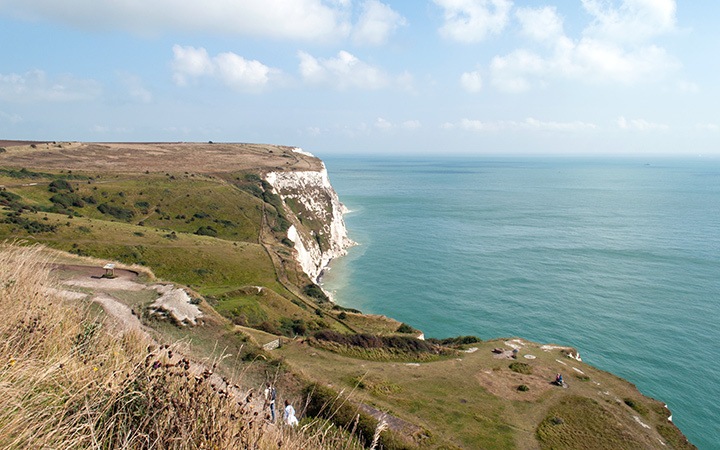 There aren’t many sights more classically British than the White Cliffs of Dover. They were the first or last sight of home for generations of Britons arriving or leaving the country. And although you’ll more likely find me travelling to Europe high above them by plane or way below by Eurotunnel, what kind of Brit would I be if I’d never seen one of the country’s most iconic sights? So after exploring Canterbury and 1066 Country earlier this year, I headed back to Kent to discover the castles, coastline and cake shops of White Cliffs Country. A mini road trip took us through some of the area’s highlights in Sandwich, Deal and Dover. We might have only covered 15 miles in distance, but this part of the country packs a lot in. 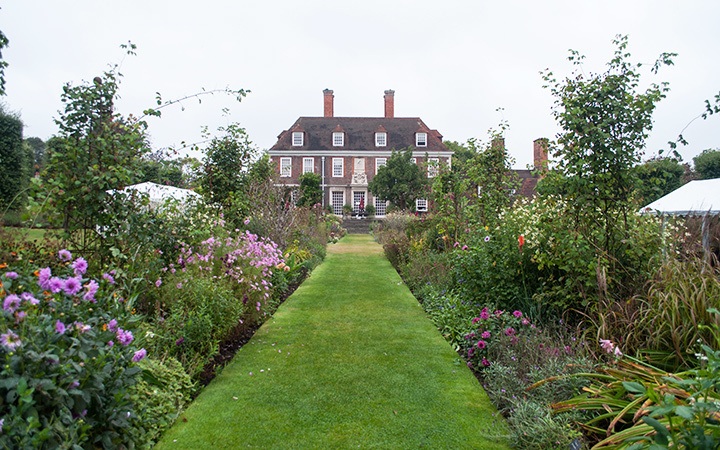 Gardens at the Salutation

A bite of Sandwich

Our base for the weekend was the town of Sandwich and the Salutation B&B, home to the ‘Secret Gardens of Sandwich’. The house and gardens were created by famous design team Edwin Lutyens and Gertrude Jekyll in 1912. It’s a 3.5 acre oasis divided into different garden ‘rooms’ tucked behind the city walls. After flood damage they’ve been restored to their former glory and are open to the public. More recently the Salutation’s had a dose of fame as the home of posh couple Steph and Dom from TV’s Googlebox (they weren’t there while we stayed but their slightly shambolic house party atmosphere lived on!). 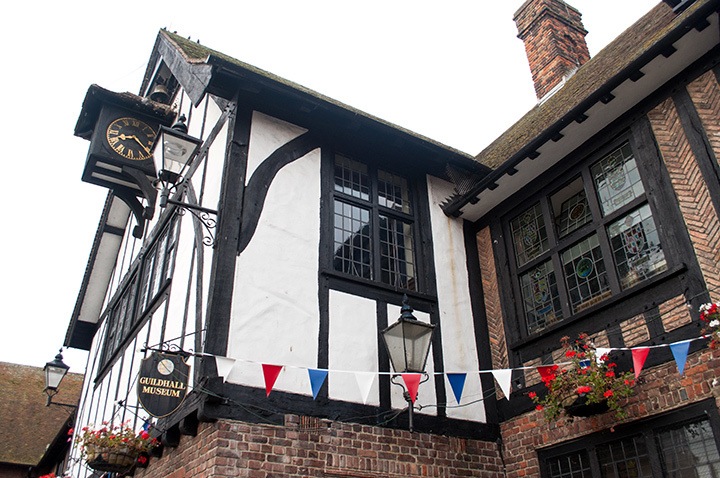 We arrived late at night and woke up to find ourselves in a pretty medieval town. The street plan hasn’t changed much since the Domesday Book and a walk around the city walls took us past narrow streets, half-timbered buildings, churches and cottages decked with colourful flowers. One of the town’s most impressive building is the Guildhall which is now a museum with a historic courtroom. But there’s one question you can’t avoid in Sandwich – which came first, the town or the bready snack? The name comes from a Saxon word for ‘sandy’, so the town came first. The story goes that John Montagu, fourth Earl of Sandwich, liked his gambling so much he couldn’t bear to stop for lunch. So his valet put a chunk of meat in between two slices of bread so he could eat it without stopping, and the sandwich was born. 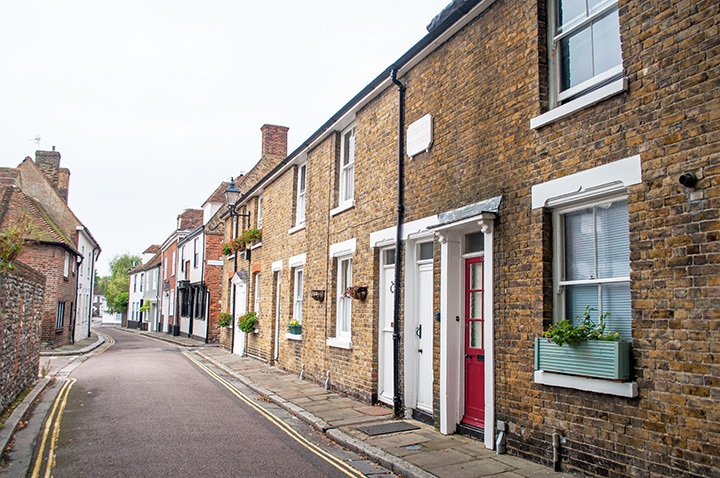 Sandwich was one of the Cinque Ports, a group of five historic towns that joined together in a defensive and trade group – the others are Hastings, Rye, Dover and Hythe. It was a major port in medieval times, but the River Stour silted up over the years and the coast is now a couple of miles away. The nearest you can get to sailing out of Sandwich now is a ride on the Sandwich River Bus from the quayside, which runs seal-spotting trips out into nearby nature reserves or boat trips out to Richborough Roman Fort. 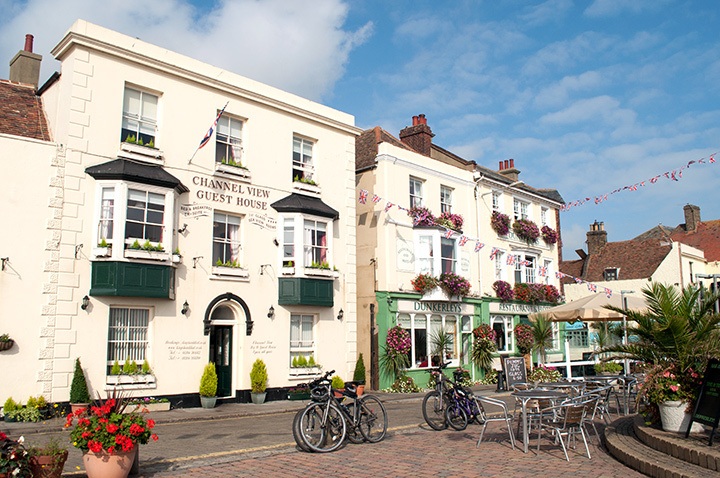 Along the seafront in Deal

Just six miles away from Sandwich was our next stop, the town of Deal. Deal sits on the south Kent coast and has miles of pebbly beach. It was an important port in its day, with visitors like Admiral Nelson and Captain Cook, even though it never actually had a harbour. Instead ships would anchor just offshore in a sheltered area and people and goods would be brought in to shore on smaller boats. If you want to know more about Deal’s seafaring history then there’s a Maritime and Local History Museum. We took a blustery walk down the town’s pier for a view along the coast. This is pier number three for Deal and it’s been standing strong since 1957 after the first was torn down in a gale and the second was hit by a ship. 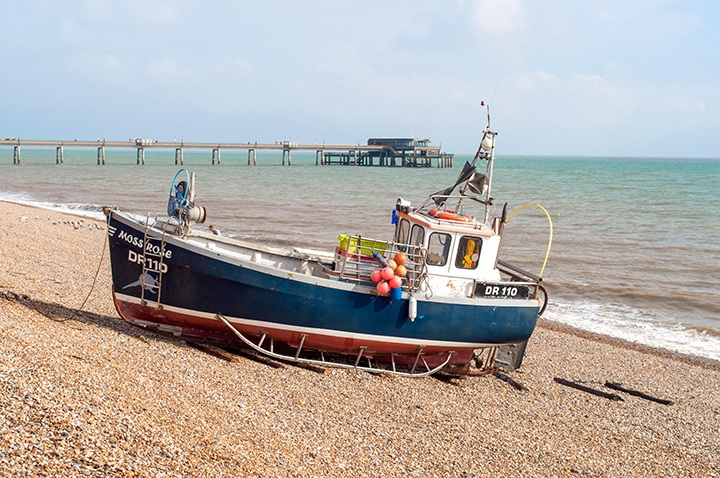 Our visit to Deal coincided with its annual ‘braderie’. This is a kind of flea market held on one Saturday each September. Stalls selling antiques, jewellery, plants, books, crafts – and pretty much anything else you can think of – take over the whole town centre. The streets were hung with bunting and packed with bargain hunters. The town has lots of cute cafés and independent delis and wine bars just waiting to be explored. But we snuck away from the crowds and went searching for the most picturesque 17th-century cottages (and their most Instagrammable doors) in Middle Street. This stretch of coastline used to be smugglers’ territory and names like ‘Contraband Cottage’ give a nod to their not-so-innocent origins. 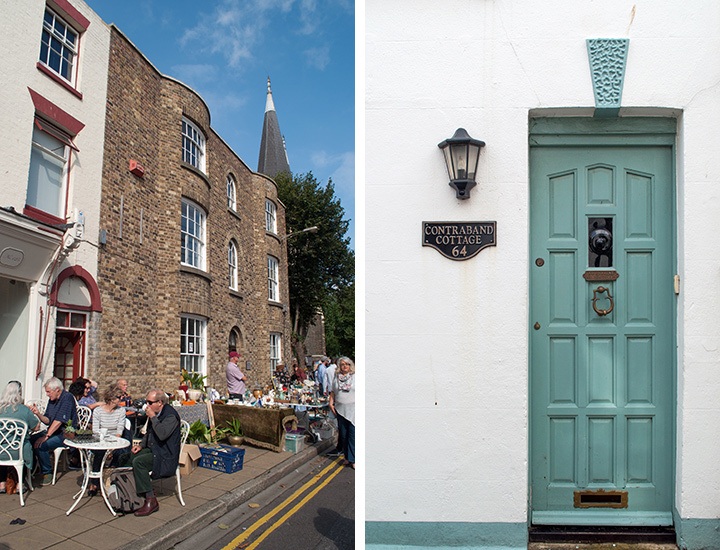 Deal’s braderie and a smugglers’ cottage

Another nine miles took us to our final stop and White Cliffs Country’s largest town – Dover. This is where England and France are closest, with only 21 miles between them (so if you fancy swimming the Channel, you know where to come). So it’s not surprising that Dover played an important defensive role over the years, and it’s another of the Cinque Ports. On land the town is dominated by England’s largest castle, founded in the 11th century to defend the coastline from invaders. And on the water there’s the huge Port of Dover, where a stream of ferries shuttle people to and from France. It only takes 90 minutes to cross the Channel, so you can easily take a daytrip over to France, but we were there to see the famous cliffs. 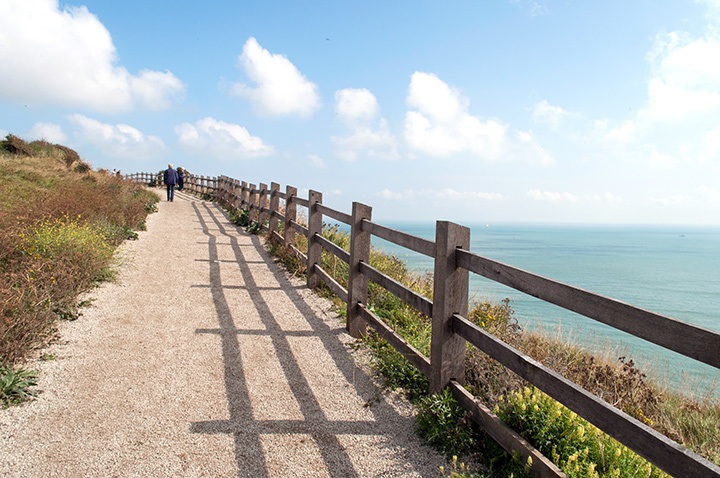 On the cliffside path

With the sun shining the chalk cliffs were a dazzling white as we joined the walkers on the clifftop path. Our destination was the South Foreland Lighthouse (or more accurately its tearoom), a 45-minute walk away. Mostly there are no barriers along the cliffs with drops of 110 metres down to the sea, so you don’t want to get too distracted along the way. But it’s hard not to with such great views. The clifftop grasslands are an Area of Outstanding Natural Beauty and a Site of Special Scientific Interest. They might not look much, but there’s an amazing diversity of plants, insects, butterflies and birds (though you’re unlikely to see any bluebirds) – with more plant species per square metre than the Amazon rainforest. 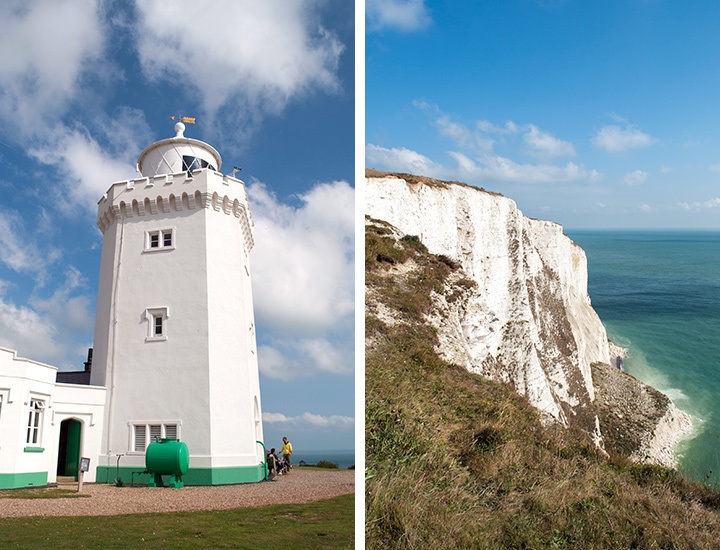 The lighthouse and the famous cliffs

The South Foreland lighthouse is the most recent in a long line of lighthouses built on the cliffs to protect ships from the hidden dangers of the Goodwin Sands. This ten-mile-long sandbank just offshore was nicknamed the ‘Great Ship Swallower’ and it has left the remains of a few shipwrecks along the coast. The current lighthouse is Victorian and you can take a tour to find out more about its history, including its role in Marconi’s early radio experiments. Then we refuelled before the return walk at Mrs Knott’s tea room in the old lighthouse keeper’s cottage. It’s a trip back in time with vintage crockery, cream teas and a 1940s gramophone – those original travellers sailing off from Dover would feel right at home.

Thanks to White Cliffs Country for hosting me. This article contains affiliate links, where I’ll get a small commission at no extra cost to you – thanks.

It is incredible how much there is to do in a relatively small area - I've only been to Dover (and further along to Rye and Hastings) but would love to explore here more.

I'd never been to this part of the world at all before this year but have found so much to see – I loved your post from Whitstable so that might have to be next on the Kent hitlist!

So annoying that the south coast is so far... south, Lucy! :)

It is a bit isn't it! We're not too far north but it's a long trip to get down here across the country unfortunately.

This is a part of the UK that I haven't yet visited - it looks pretty amazing!

It is! I'm a bit of a Kent novice having grown up on the other side of the country, finally getting to visit all these famous names I've heard about for years.

We did a very quick stop in St Margaret’s Bay but Walmer Castle sounds good too, one for next time!