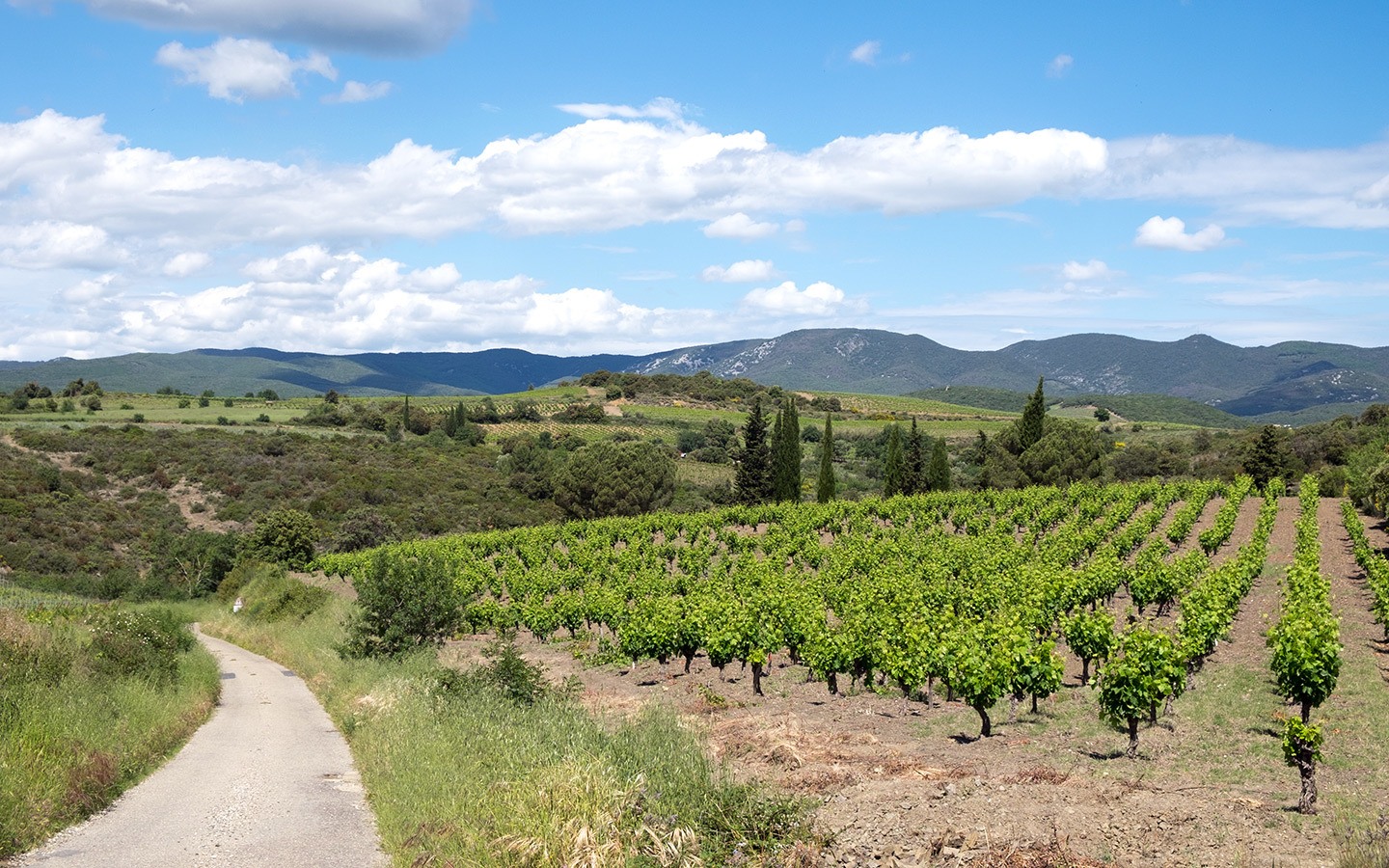 It’s a spring Sunday morning in France’s Languedoc wine region. My mum and I arrived in the dark last night after a long train journey to spend a few days at the luxurious Château Autignac wine estate. I’ve been to France more than anywhere else in the world but this is a new region for me – but I’ve never met a wine region I don’t like yet, and as I open the curtains onto a cool sunny morning with birds singing and look out onto a maze of red rooftops and flower-filled gardens, I don’t think this is going to be the first. 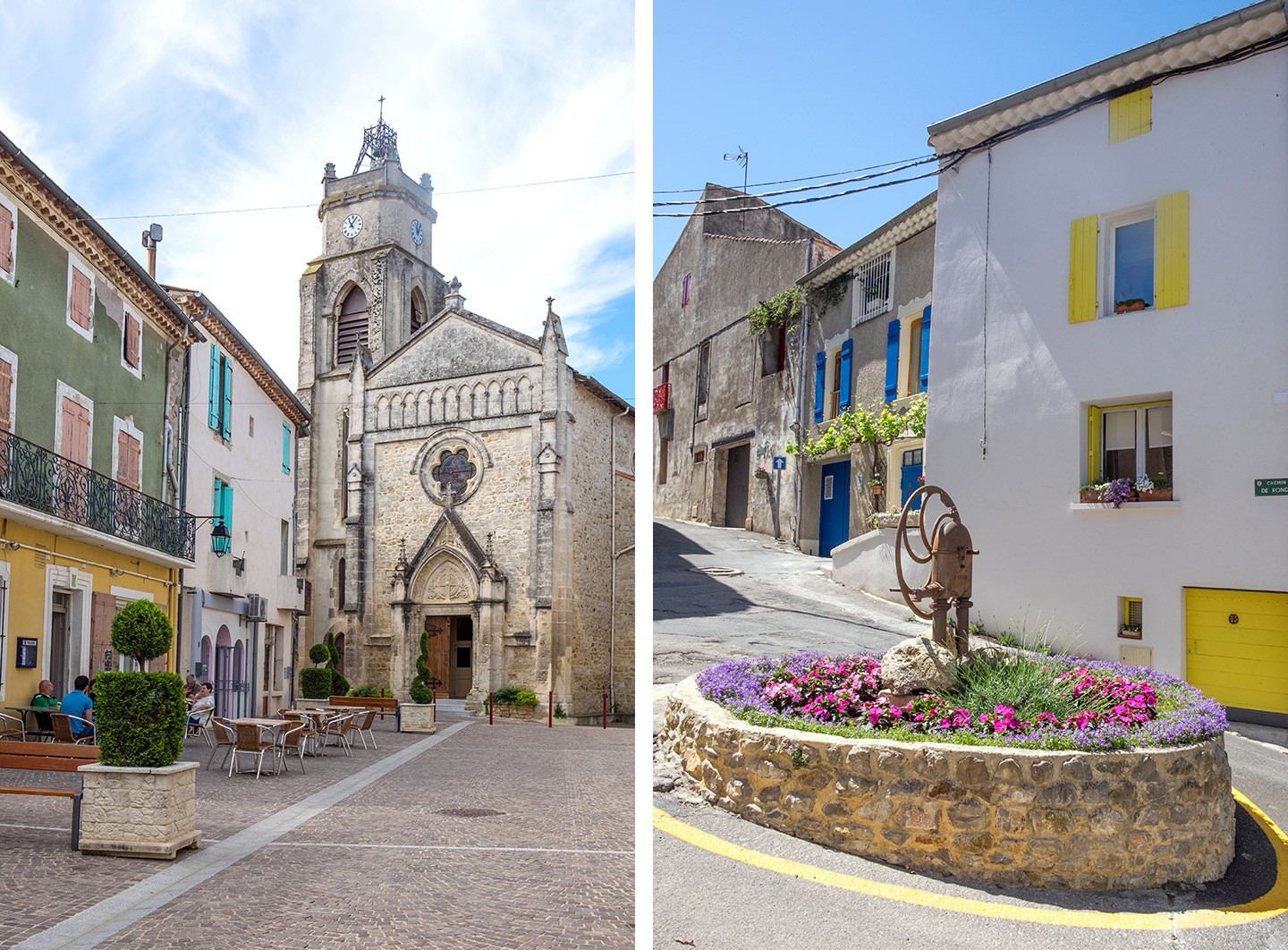 Autignac’s a tiny place with just 800 residents, a café and a couple of shops, with its narrow streets and stone houses centred around the church square. But early on Sunday morning it’s a ghost town and we don’t see a single other person as we head out for a walk. The village is so small that whichever direction you walk in, within a few minutes you’ll find yourself out among fields of vines. It’s so peaceful – all you can hear is the chirping of swifts and buzzing of insects. Wine’s a huge industry in the Languedoc – the region produces a third of all the grapes grown in France. So everywhere you look there are rows of vines stretching into the distance. Some are neatly pruned ready for the start of a new season, others are overgrown and mixed in with weeds and wild poppies, some are young and spindly and others are old and gnarled. 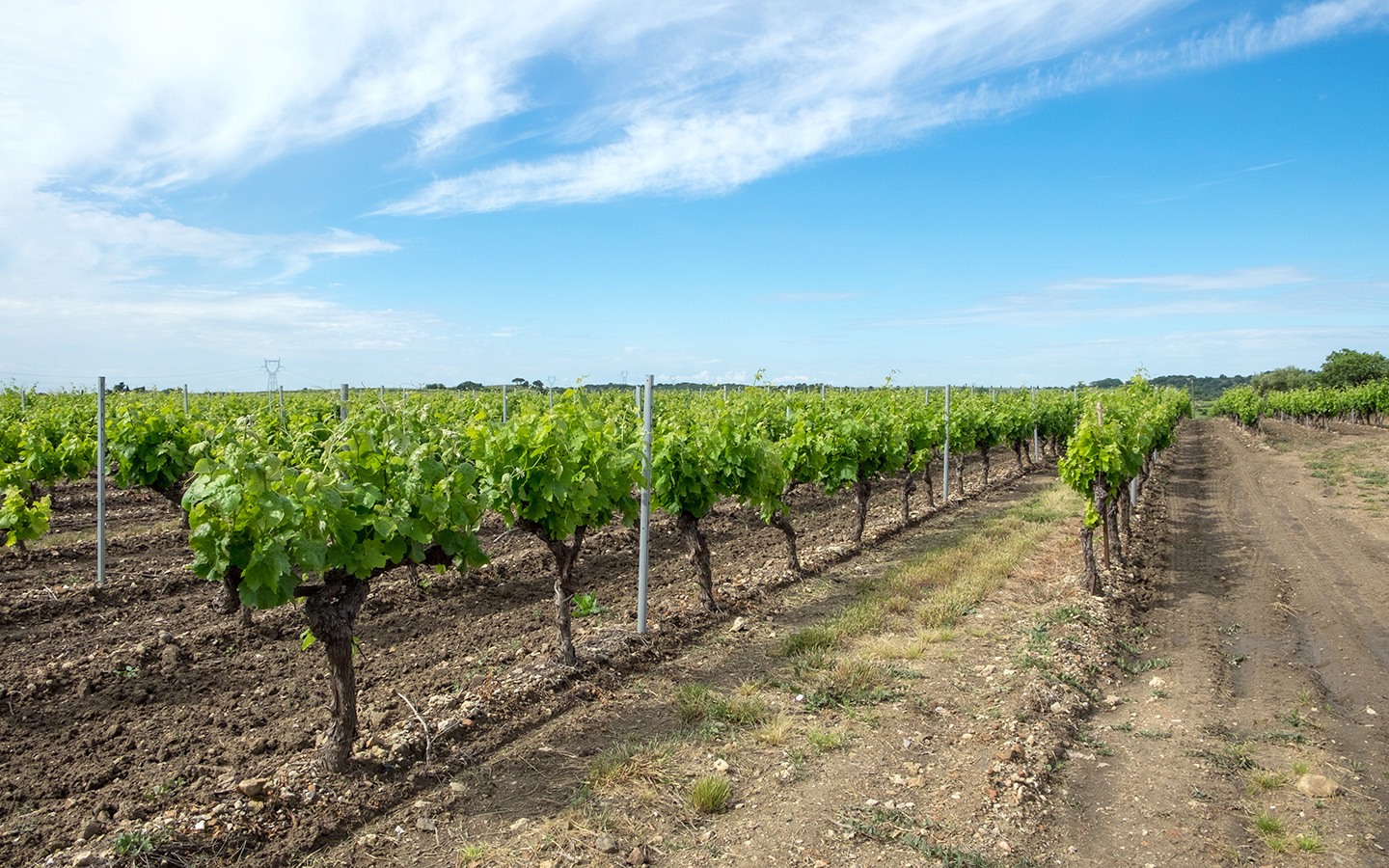 It’s the perfect temperature for wandering around – in May and June the temperatures average around 20 degrees and humidity isn’t too high. So it’s sunny and warm enough to walk around in a t-shirt but without that heavy, stifling heat which hangs over this area in the summer. As we head back into the village it’s slowly coming to life. People are walking by with baguettes and gathering in the café next to the clock tower for a coffee and a catch up on the local gossip – you couldn’t get much more French if you tried. 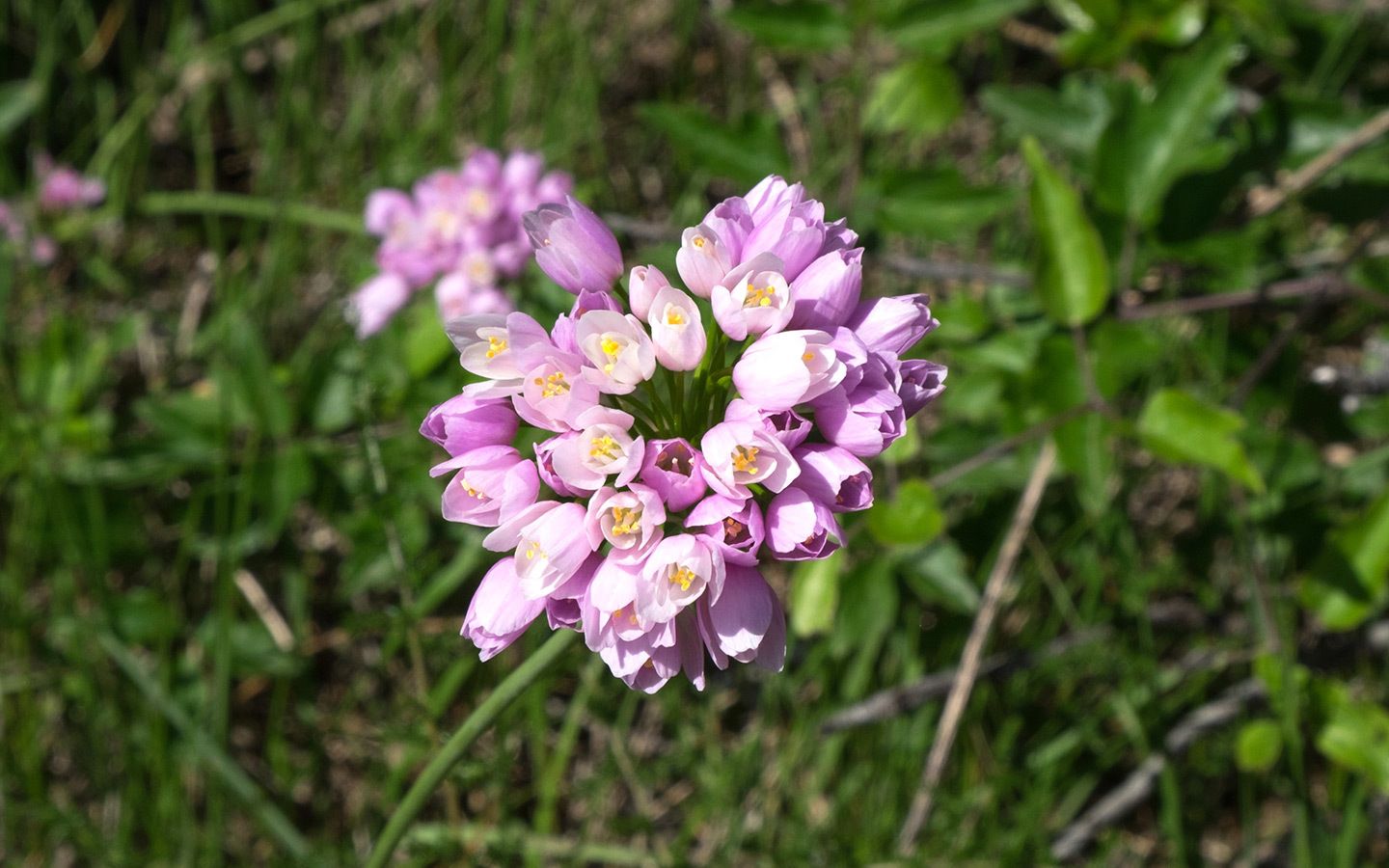 Wildflowers in the Garrigue

But we don’t have time to stop, instead we’re on our way out of town to the nearby village of Faugères. This is the heart of the Faugères AOC wine region which covers Autignac. The area originally grew grain and olives – and you can still see olive trees dotted around – but it changed to wine around the French Revolution. Now it produces a mix of red, white and rosé wines from 1800 hectares worth of vines. There’s more reds that whites, made from the Carignan, Cinsault, Grenache, Mourvèdre and Syrah grapes. But you do find some white grapes like Rousanne, white Grenache, Marsanne and Vermentino grown here too. 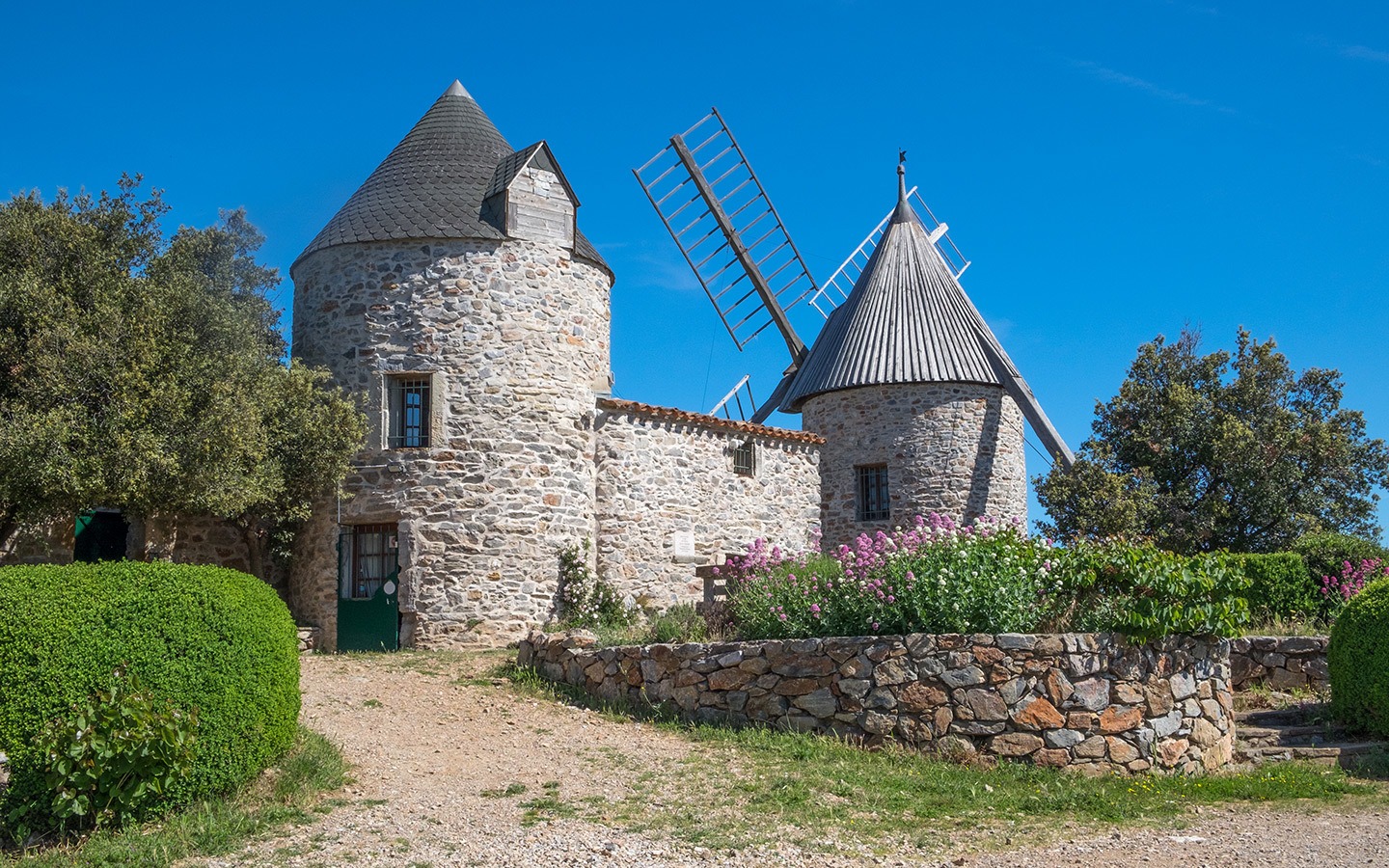 But before we get to crack open a bottle ourselves, we have a big hill to climb. There are three restored windmills overlooking Faugères so we head uphill to see the view from the top. The landscape around this region is called the Garrigue, a bush scrubland made from juniper, broom and wild herbs like rosemary and thyme, with wildflowers scattered along the edge of the path. We don’t see another person until we get to the top where a Frenchman in a Renault van is giving the mill’s windows a fresh coat of paint. The windmills have been perfectly restored, with flowerbeds of colourful blooms covered in butterflies. 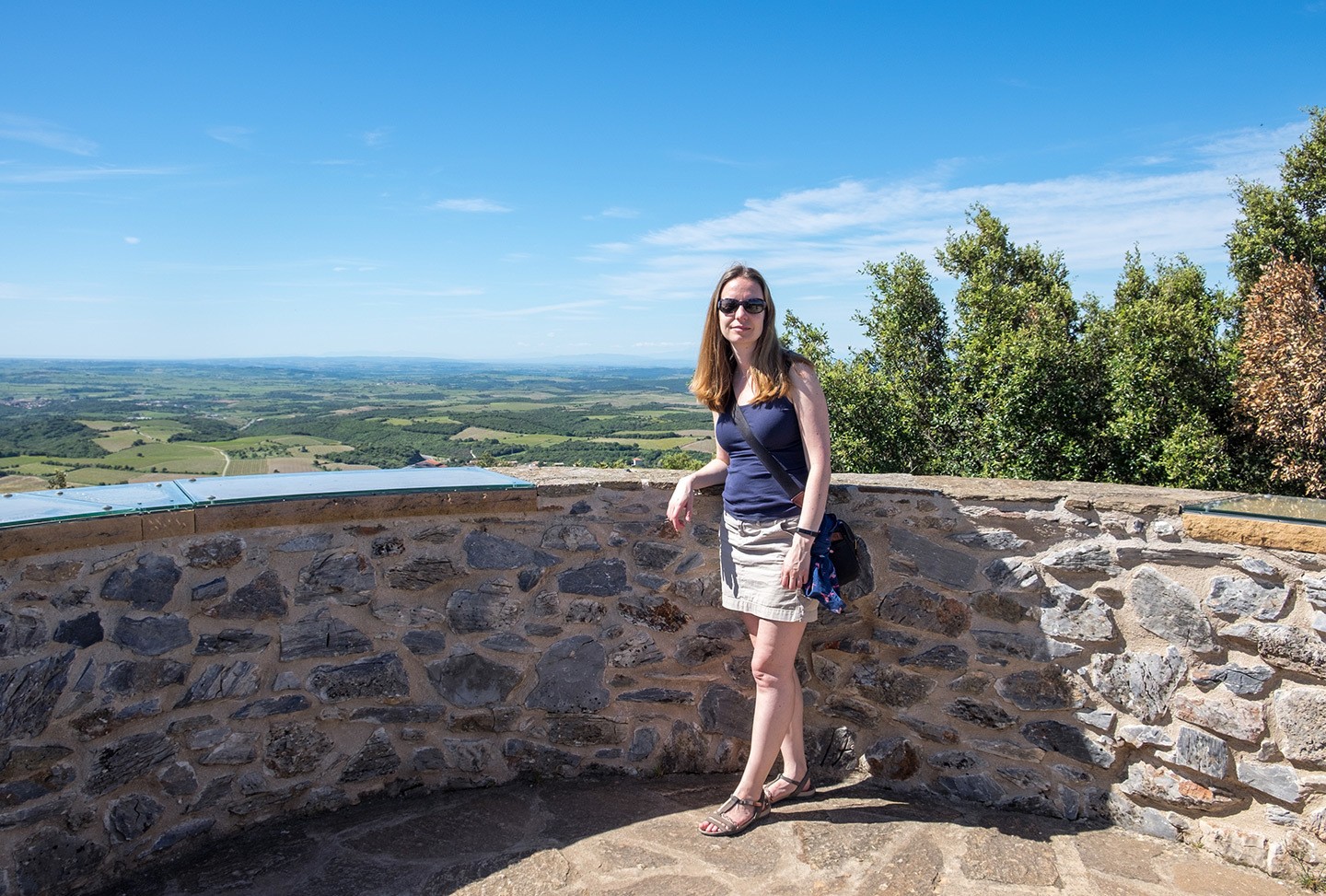 Views from the top

Back down in the village we head to Dame Jane, a wine cellar come simple bistro. It’s the sort of place where your choice is one dish of the day (today’s is pork with polenta and asparagus) or a plate of local meats and cheeses. But it’s really all about the wine, and we try an amazing pale, dry local rosé which you can’t find anywhere else. The cellar’s a real social hub and even doubles as the village post office. A steady stream of people come through, mostly locals but a few tourists who are doing wine tours around the Languedoc. Faugères is a bit bigger than Autignac but feels just as sleepy. Most people head to the bigger cities like Beziers or Narbonne for work so in the daytime you almost have the villages to yourself. 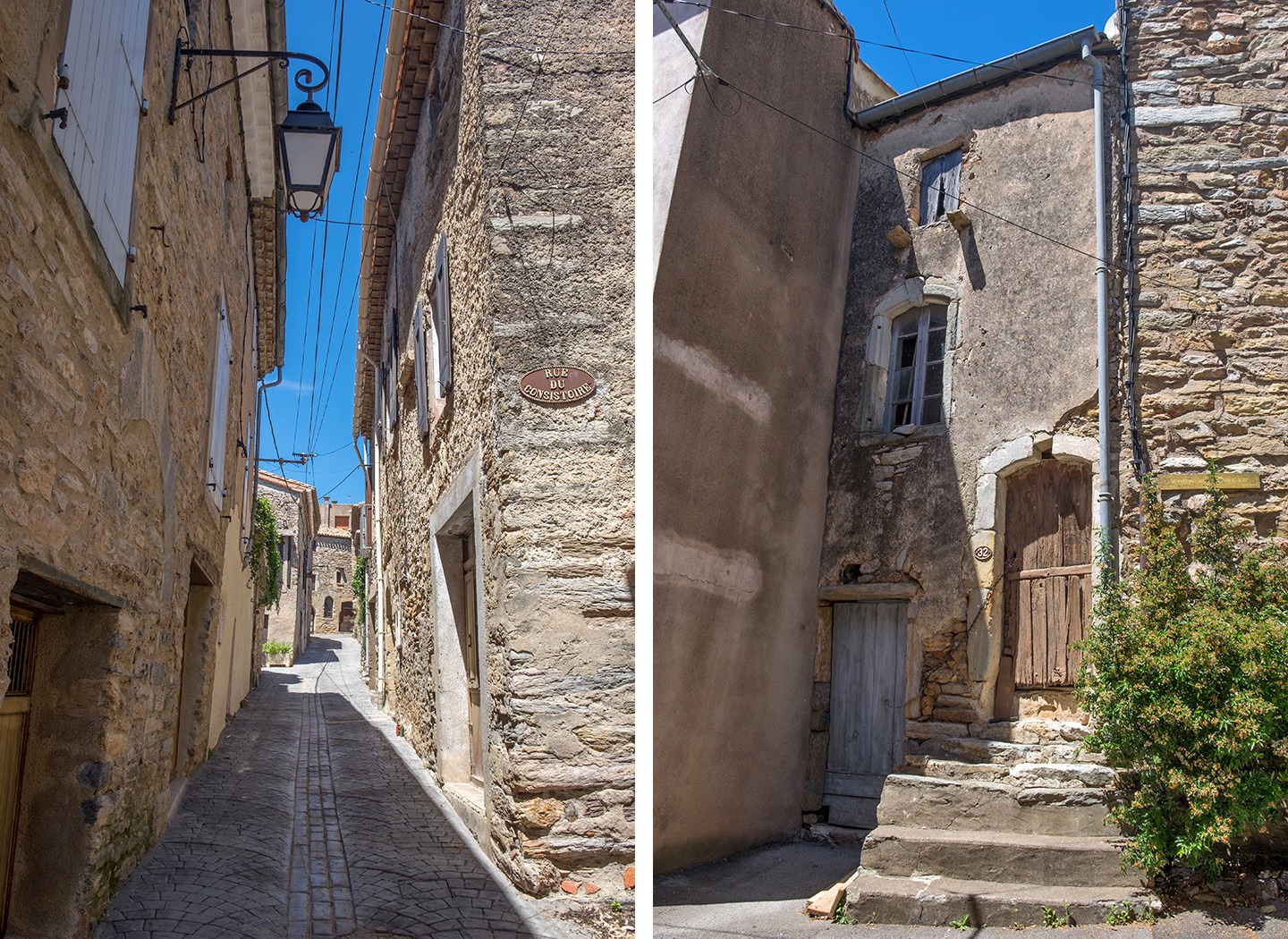 Nor far from Autignac is the Haut Languedoc National Park, and we take a drive high up in the hills through gorges and past rocky peaks. It’s a bit of a mystery tour, but our driver Olivier’s sat nav eventually takes us down a road so narrow that the car’s parking sensors have a bit of a meltdown. When we finally make it out at the bottom we’re in a secret restaurant garden. Frères Bonano is actually two restaurants in one, with a smarter place above and the more relaxed tapas-style Trou du Kru in the gardens out front. 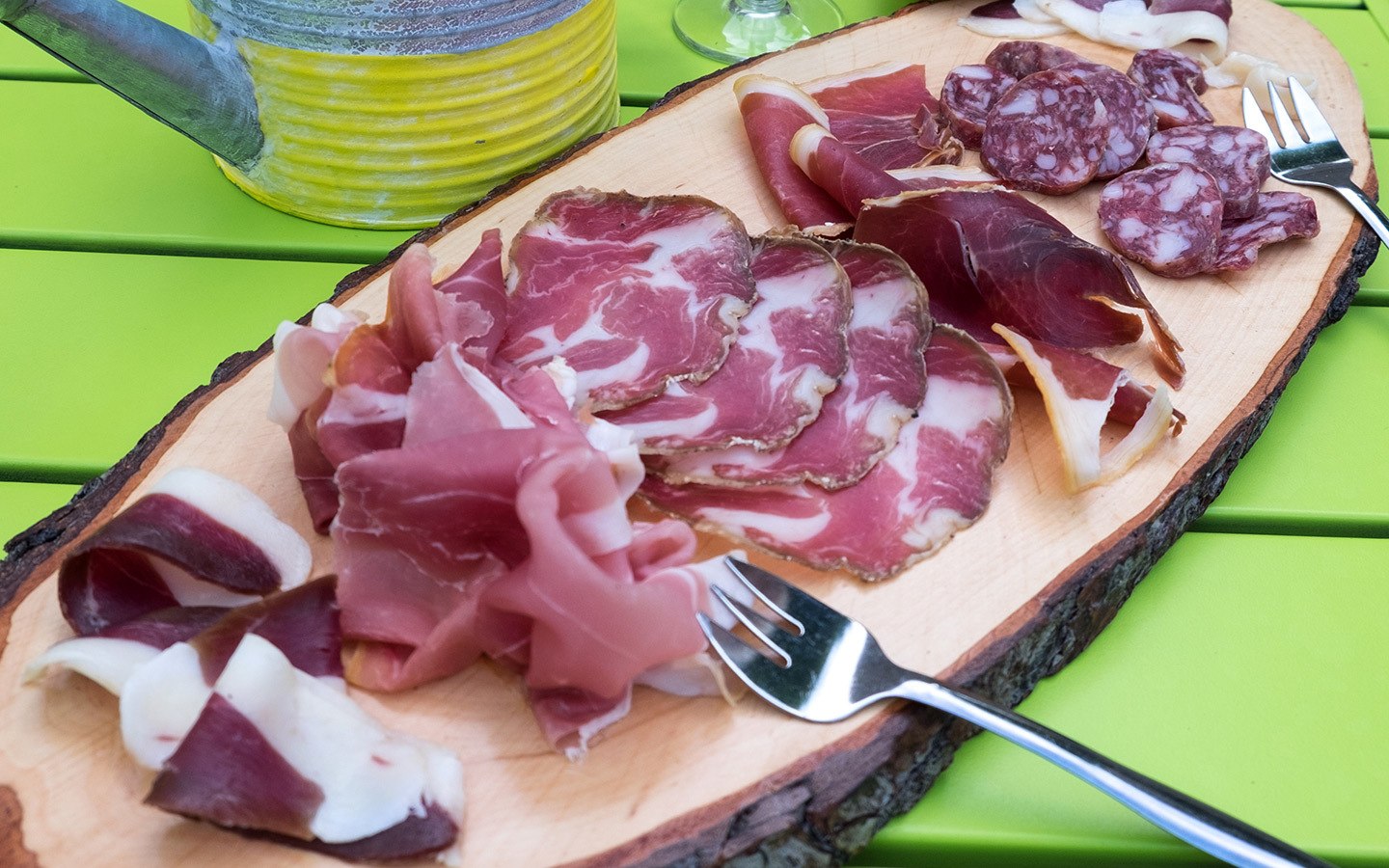 The brothers learnt their culinary skills from their parents who own a highly-rated restaurant nearby. With giant hams hanging over the bar it’s a bit like being transported back to a tapas bar in Seville. So what else could we start with other than yet another huge plate of charcuterie, with paper-thin ham and thick chewy slices of sausage, along with a few glasses of red from Carcassonne to go with it. The restaurant’s one of the few places around here open on a Sunday night so there’s a steady stream of people coming in – most of which seem to know each other – and a couple of the brothers’ children running around the gardens. 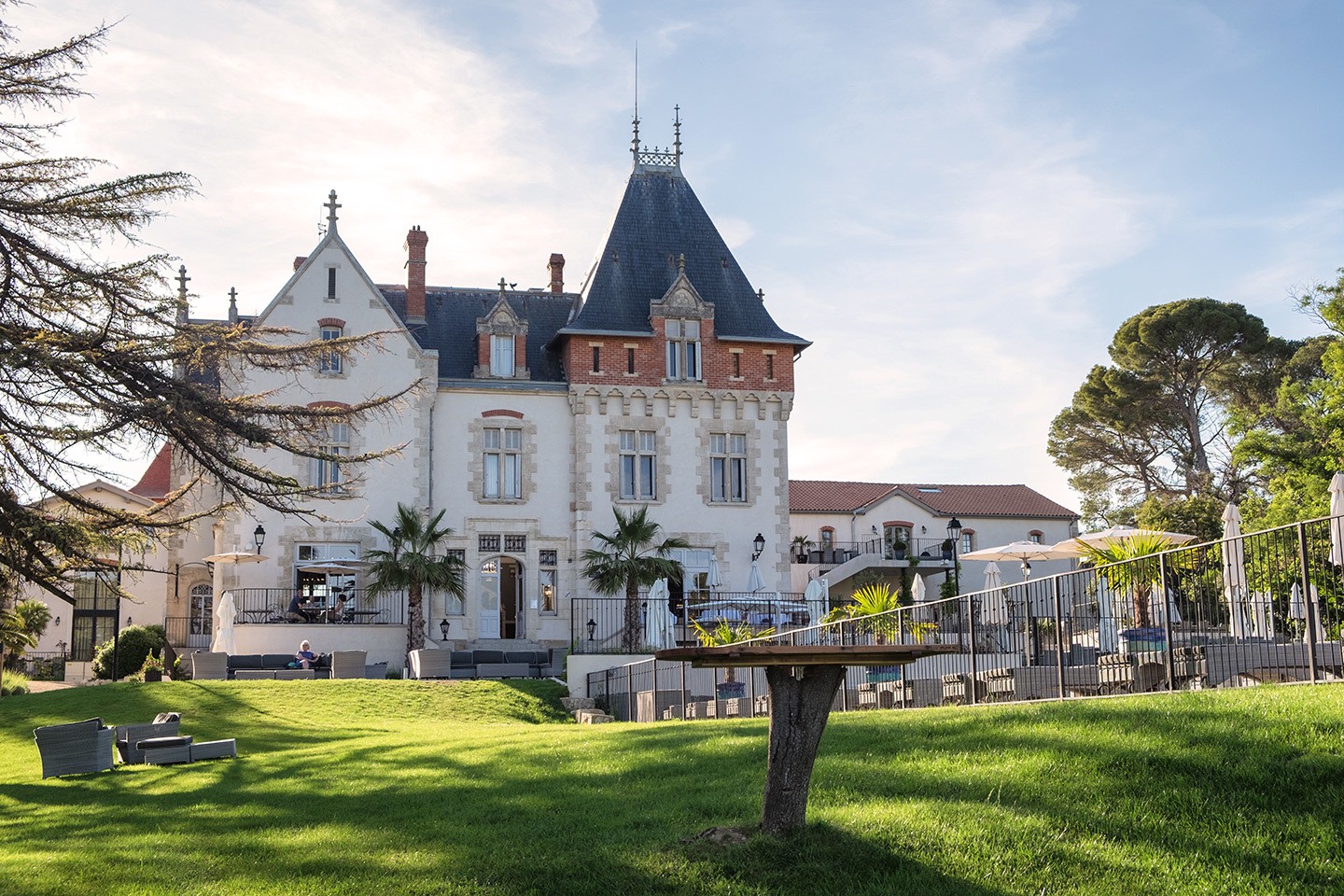 In contrast to the low-key local life, our final dinner is on a bit of a grander scale. We travel a few miles from Autignac to the Château St Pierre de Serjac. Our first sight of it is an imposing white building among the vines, with a tree-lined driveway up to the entrance. It’s another wine estate but this is owned by an Irishman who’s made a whole business empire out of it, with a spa, restaurant and posh holiday apartments. We start off with a drink on the terrace – another rosé, this time one of their own. It’s a pretty special spot to end our Languedoc trip, looking over the vines and the hotel’s infinity pool in golden evening light. 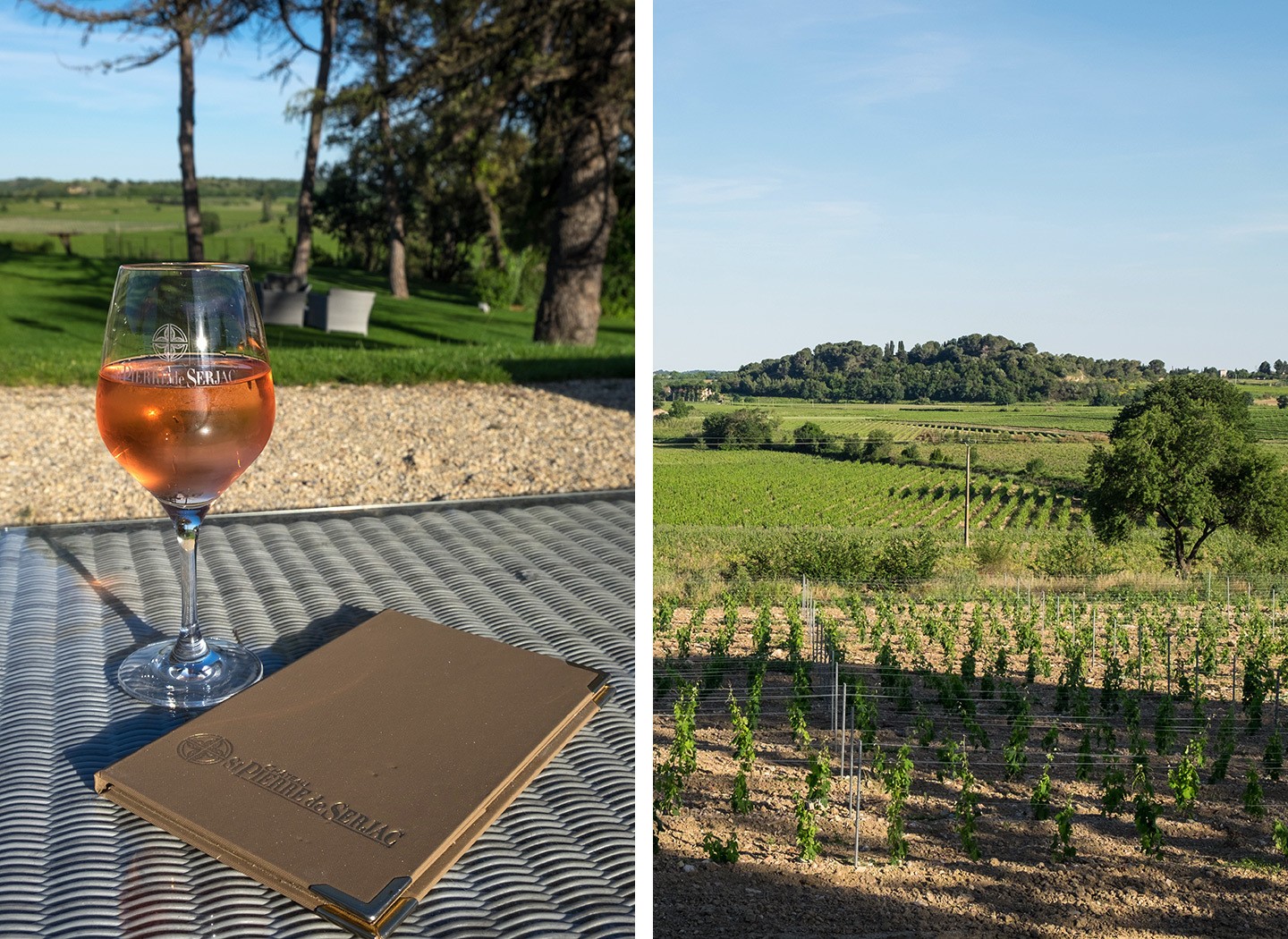 Wine by the vines

Dinner’s a bit of a contrast too, a three-course set menu with a celeriac and quail’s egg appetiser, fois gras pâté, thick slice of rare beef with butternut squash croquette and citrus sorbet dessert. Surrounded by smartly dressed French and American couples we feel a bit scruffy, but at €38 per head it’s not ridiculously expensive. Off-season it really feels like you’re discovering the Languedoc for the first time – it’s not busy, the food is fantastic, prices aren’t too high and the weather – and wine – are pretty perfect.

We travelled by train to Beziers from Paris, which took just over four hours and cost €25. There’s also a small train station in Bédarieux, which is about five miles north of Faugères. If you’re travelling by air the nearest airports are Béziers (25 miles away), Montpellier (56 miles) and Carcassonne (80 miles). It’s easiest if you have a car to get around as there’s not much in the way of public transport, but we were picked up from the train station driven around by the brilliant Gilles and Olivier from Narbonne VTC. 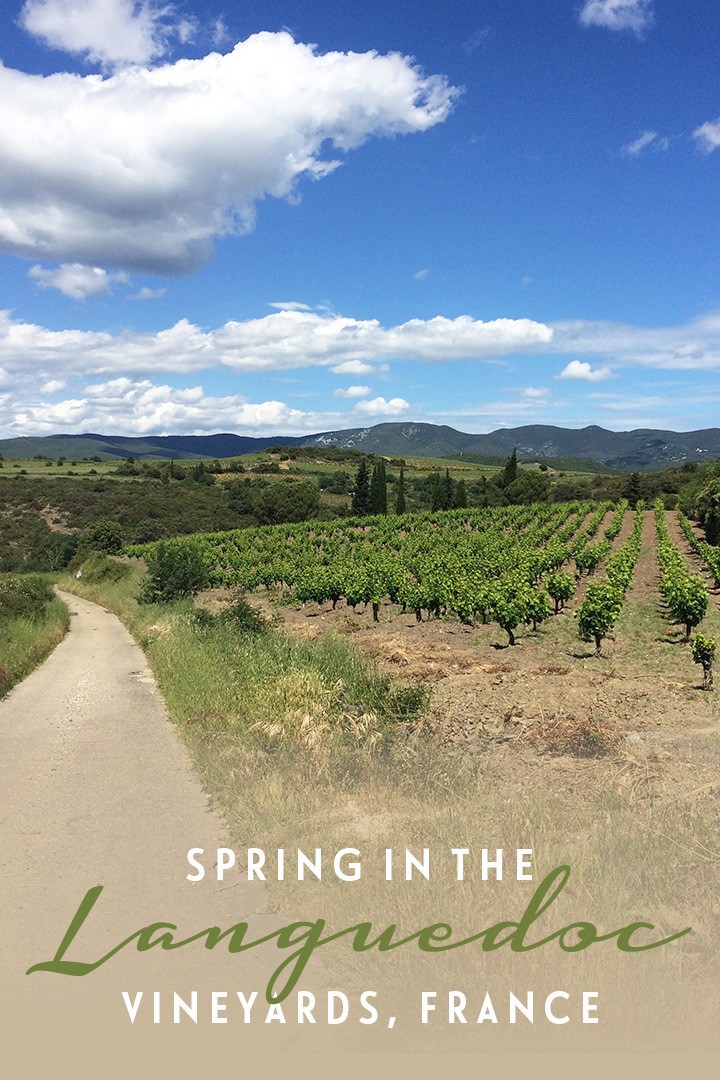 It is indeed a very beautiful region with so many possibilities ! I especially love the wine from Corbières but one of my favorite places is a small village St Guilhem le Désert! So atypical and beautiful!

Sounds lovely – I'll have to check it out next time, hopefully I can get back there sometime soon!

I felt myself unwinding as I read this post. it looks such a relaxing place. and how wonderful to have someone to drive you around. Perfect!

So nice – if I was rich I'd have a full-time chauffeur at home!

Château St Pierre de Serjac - just stunning. In fact, the whole Languedoc region looks like my glass of Carcassonne red. I really should explore more of France's wine regions. I think I'd start here Languedoc becuase it looks so pretty

So many wine regions to choose from too – it'll keep you going for a while!

Please please whatever you do don't go to Sterna - there are so many better places to go. Well McDonalds would be a better place to go.

Yes you couldn't really be anywhere else in the world could you!