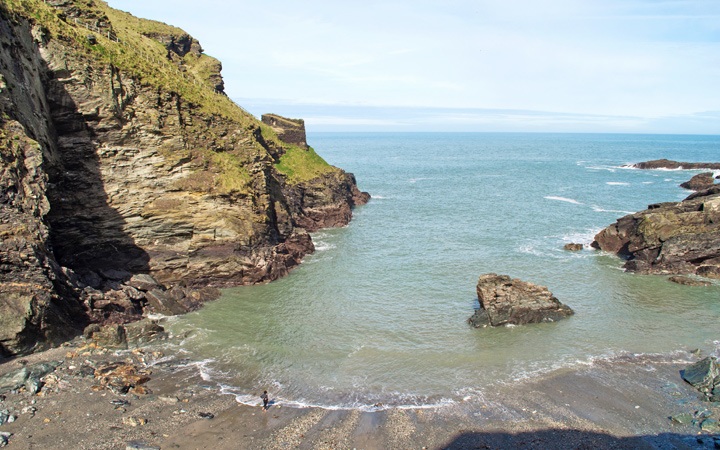 Along the wild northern coast of Cornwall, Tintagel Castle is where history meets legend – combining the ruins of a Dark Age castle with the mythical stories of King Arthur. All of which comes with a dramatic setting on one of the UK’s most spectacular stretches of coastline.

Legend has it that this was where Arthur was conceived. His father Uther Pendragon was besotted with the Duke of Cornwall’s wife Ingraine. So when he heard the duke had been killed, Pendragon got Merlin to use his magic and disguise him as the duke. Ingraine thought he was her husband so she slept with him and Arthur was conceived. And in an impressive bit of forgiveness, when she learned the truth she agreed to marry Pendragon anyway. 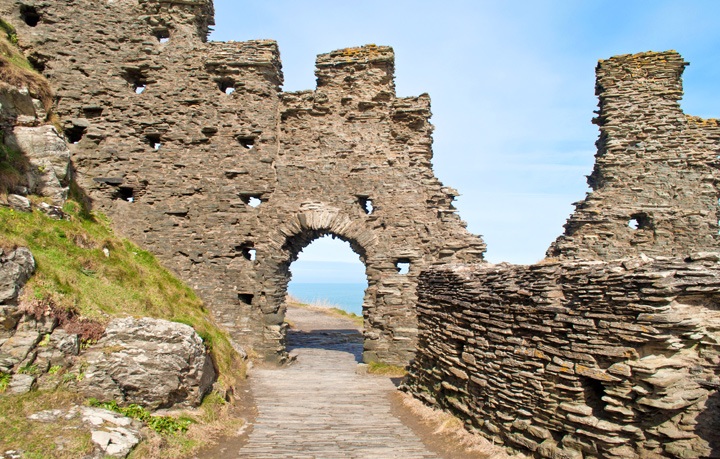 The archway in the ruins of the Great Hall

Away from the world of Arthur and back among the historical evidence, the castle ruins at Tintagel date back to the 13th century, but Tintagel’s history goes a lot further back than that. The site was first used as a Roman military outpost, then in the fifth and sixth centuries it was a summer residence for Cornwall’s Celtic royalty. The coastal location meant it grew into an important port on a vast trade network to the Byzantine empire. This meant the kings had access to all sorts of exotic luxuries, and the remains of olive oil jars, Mediterranean pottery and Andalucían glass have all been discovered around the castle. 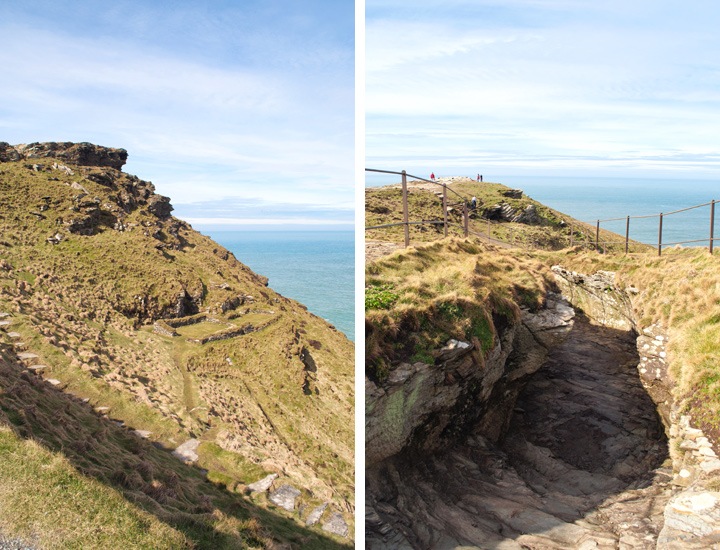 When the Celtic kings left, Tintagel was left to revert to nature. That’s until Geoffrey of Monmouth published his book, History of the Kings of Britain, in the 12th century. A kind of historical fantasy novel, it introduced the story of King Arthur’s magical conception in Tintagel. From then on the legend was born and Tintagel became famous across Europe. So when Richard, Earl of Cornwall, wanted to build a new castle in 1233, he decided that Tintagel’s Arthurian and Cornish royal connections made it the perfect spot. Its heyday didn’t last long though and by 1330 it was being used as a temporary prison and grazing land for sheep. 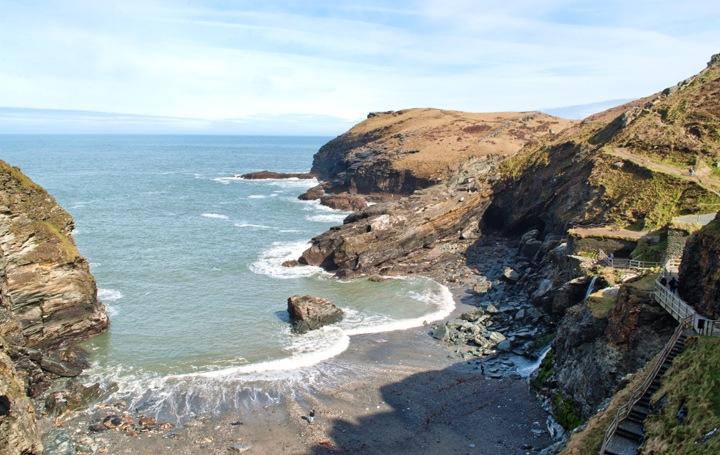 But a few centuries later fame was thrust upon Tintagel again – this time it was Alfred Lord Tennyson’s poems that revived interest in the legends of Arthur and the Knights of the Round Table. That and the arrival of the railways in Cornwall brought an explosion of visitors to the site, and they keep on coming. It’s become one of the most popular castles in Cornwall, with over 3000 visitors a day in summer – with plenty of Arthur-themed family activities. But on a sunny early spring day the paths were quiet and there was plenty of space to roam around. 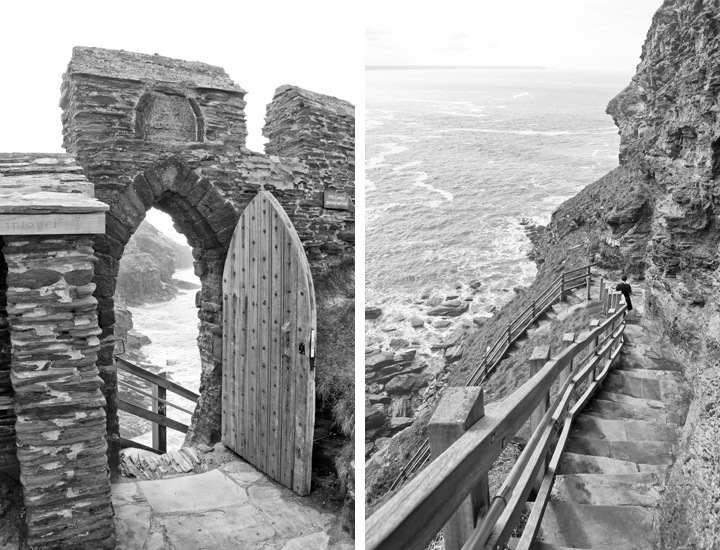 Cliffside stairs towards the entrance to the castle

Tintagel Castle is a popular spot on a Cornwall road trip, and part of what makes it so special is its location. It’s almost an island, just joined onto the mainland by a narrow neck of land. You can see how it made such a good location for a fortress. You need a decent head for heights as to get to the top you climb across over a wooden bridge and up a steep flight of stairs cut into the side of the rocky cliff. And from there you can look down onto the sea way below, and the waves crashing onto the rocks with the full force of the Atlantic behind them. With the jagged Cornish coastline stretching off into the distance on each side of the island it’s a breathtaking place. 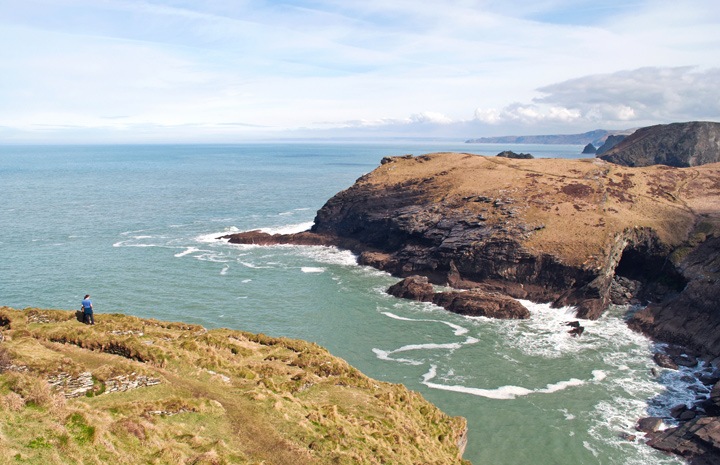 Views along the coastline

Not much of the castle is still standing – best preserved is the Great Hall with its arched doorway and slit windows. Low stone walls also show where houses, kilns and a chapel once stood. But Tintagel has plenty of secrets still to discover. Excavations only started in the 1930s and it wasn’t until fire broke out and burnt away the headland’s covering of heather that artefacts started to be found. There’s been a stream of pottery, carvings and coins from the Iron Age to the medieval period. But less than 10% of the site’s been excavated so far so who knows what else there’s still to find – who knows, maybe Arthur left his mark after all? 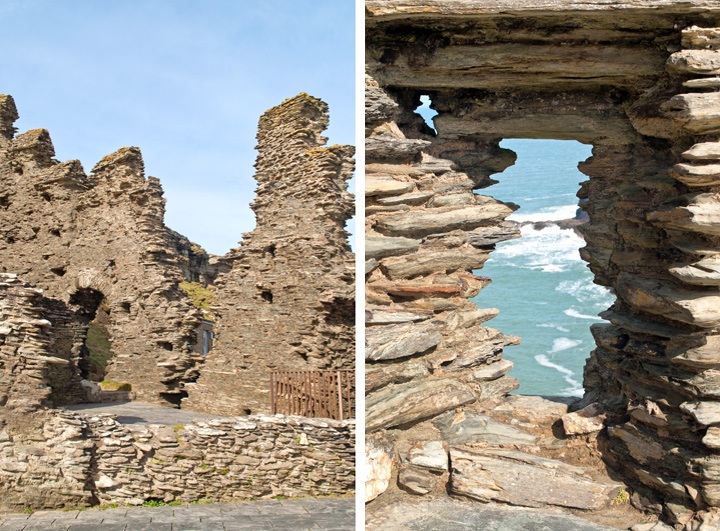 Windows and doorways in the Great Hall

Tintagel Castle is open from 10am–6pm from March to September and until 5pm in October. The rest of the year it’s open 10am–4pm on Saturday and Sunday only, except during February half-term. Entry costs £8.40 for adults, £7.60 for students/over 60s and £5 for children aged 5–15. Or it’s free if you’re an English Heritage member – annual membership gets you entry to 400 sites across the country and costs £54 per adult or £96 for joint membership, and you can get three months free if you sign up by Direct Debit. 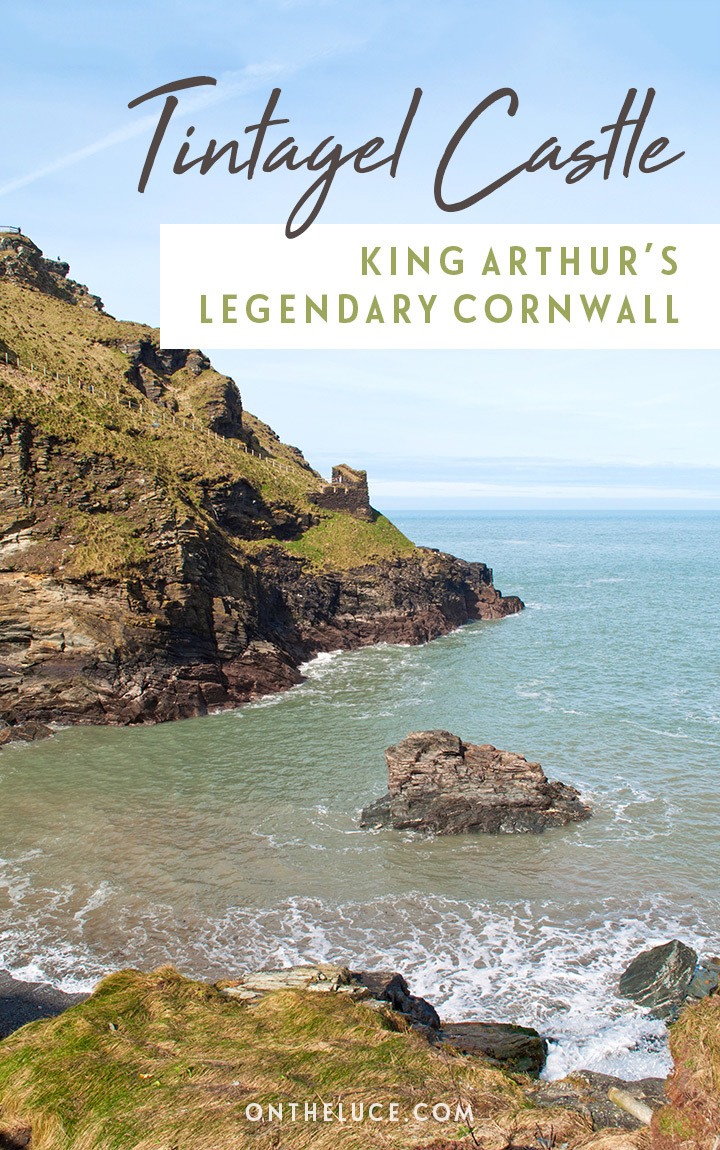 Love Tintagel, Spent 18 years of my life growing up down there, beautiful place, always my home! lovely to read such a nice post about my little hometown (more village!)

Such a lovely place, really enjoyed exploring it!

Beaaaaautiful pics and post!! I so loooooooove it!! I'm crazy about King Arthur's tales and I'm seriously considering to spend some short breaks in Cornwall. I was considering to stay in a cottage, because I need to take my dog with me (I don't have anyone who can take care of him while I'm out and I found it might be easier to stay with him in a "normal" house). Do you have any tips?? What is the best place to stay that is near Tintagel, but not that expensive??

Thanks for this beautiful photos! ♥

Thank you, it's a great place! Cottage rentals are a really good idea, especially if you want to bring your dog. There are a lot of rental companies – I've used Cornish Horizons and Stay in Cornwall recently and both were really good. If you're on a budget you might want to look inland a bit near Bodmin Moor as it's not far from Tintagel and tends to be a bit cheaper than the coastal villages.

'Love this piece. Surprisingly, I don't believe that I've ever been to Cornwall even though I've been everywhere else! At least, I might have been there as a kid, but not as an adult as I can't remember lol!

It is a long way from pretty much everywhere else I'd spend a lot more time down there, but the coast is just gorgeous – well worth a visit sometime!

Brilliant I've been obsessed about the legends, hope to visit here someday!

It's a really interesting place – and those views are just gorgeous on a sunny day!

I love history & legends and going to see Arthur's part of the world is something I've wanted to do but still haven't got round to. This has inspired me to sort my act out! Keri

The are some great myths and legends in this part of the world – I only scratched the surface but would love to see more sometime!