Titanic Belfast: Stories from a shipwreck 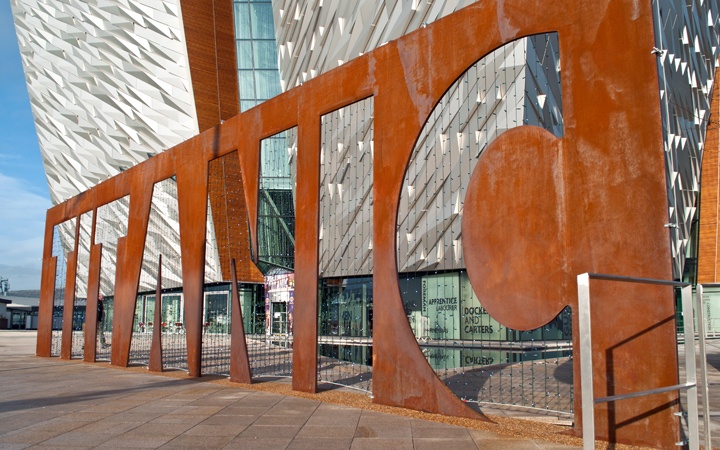 What is it about the story of RMS Titanic that has captured so many people’s imaginations? Just over a hundred years ago, the famous liner hit an iceberg and sank off the coast of Newfoundland. But where other maritime disasters have been and gone, lost in the passing of history, this one still lives on (and on… in the words of Celine Dion). After events in 2012 to mark the hundred-year anniversary of her sinking, Titanic is still making news now, as an eccentric Australian billionaire plans to build Titanic II. A complete replica of the original, it’s due to set sail from Southampton to New York in 2018, hopefully more successfully this time. Over 40,000 people have applied for a place on the maiden voyage. So why does Titanic still hold such a fascination for people – me included – after so long? I set out to find out more at Titanic Belfast.

Titanic Belfast reflected in the still waters of Belfast Harbour

As the city that built her, Belfast likes to think of itself as the home of Titanic. In the Queen’s Island area of Belfast Harbour, the engineering company Harland and Wolff built some of the world’s biggest liners in the mid-19th century. Titanic and her sister ship the Olympic were the biggest yet, so huge that special slipways and docks had to be built and over 10,000 people employed. But with the decline in heavy industry and shipbuilding in the twentieth century, the harbour buildings were abandoned and fell into disrepair.

Harland and Wolff still owned the land until 2001 when they sold it off for redevelopment and Belfast’s new ‘Titanic Quarter’ was born. Since then apartments, a university campus and science park have been built. But the city also wanted to commemorate its part in the building of the Titanic, so plans were drawn up for a museum to show off both the story of Titanic and Belfast’s maritime history. 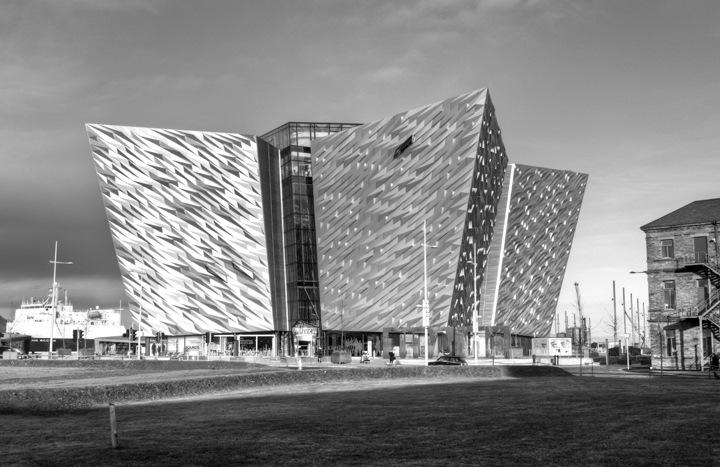 Prows of a ship or an iceberg – what do you think it looks like?

Titanic Belfast opened at the end of March 2012, just in time for the hundredth anniversary of Titanic’s launch. It’s an impressive looking place, with the aluminium shards on the outside glinting in the sunlight. The same height as Titanic herself, the design is supposed to look either like ships’ prows pointing in each direction or a giant iceberg, depending on who you believe. It quickly became the most popular tourist attraction in Northern Ireland, and sees almost a million visitors each year.

It’s split into nine different galleries that take you from the start of construction in ‘Boomtown Belfast’ right through to the discovery of the wreck in the 1980s. There aren’t many artefacts from the ship itself, mainly as so many of them have been sold off to collectors around the world for huge prices. The focus is much more on the stories of the people who built, worked and sailed on Titanic.

The entrance to Titanic Belfast

First you learn about how she was made with a ride that gives you some idea of the scale of construction. It takes you through a simulated shipyard where sound and video show the conditions the shipbuilders had to work in. Then you can look out of the windows to see the place where it all actually took place. The next galleries take you through the fit-out stage – with recreations of the interiors from basic third class to luxurious first – going on to the launch and maiden voyage over to Southampton.

This is where I have my own little family link to Titanic. My grandmother worked for a doctor who was due to work on the ship, but ended up missing his train and Titanic had already left once he got to the port – a very lucky escape. The next gallery takes you through the events of 14–15 April 1912, from the first iceberg sighting through to the rescue of survivors by the Carpathia. It’s all told through the personal stories of survivors and its the little details they remember that really bring the disaster to life. 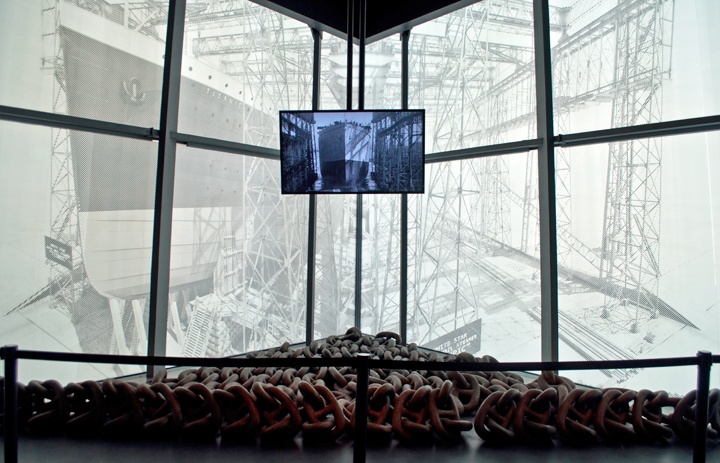 From there you go through the aftermath. The sinking of the ‘unsinkable’ shocked people across the world, but it did have a positive effect in improving maritime safety standards. Nobody wanted to see a repeat of the tragedy. The 1500-person death toll made the sinking of the Titanic the worst peacetime shipping disaster in history. It got a huge amount of press and there were books and plays written about it and commemorative memorabilia made. But a few years later Britain was launched into the First World War and soon the death toll from the Titanic became an everyday occurrence in the trenches.

She became just another disaster in a decade of loss. So much so that when her sister ship the Olympic came up for sale after working as a WWI troopship and then an ocean liner in the 1920s and 30s, she finally ended up being scrapped when no-one wanted to buy her. Hard to imagine now.

A compass tiled into the entrance hall at Titanic Belfast

But in the 1950s, the book A Night to Remember was published and made into a film, which rekindled interest in the Titanic. And from there it just grew and grew. The hunt for the wreckage was a fascinating story of its own, with weird schemes like winching her to the surface using huge magnets or floating her up with balloons. The wreck was finally discovered in 1985 and the exhibition shows amazing footage shot on the sea bed, where you can see details like plates lying in the debris field. Then in 1997 the film Titanic came out and a whole new generation of people became interested in the story.

There are museums and monuments to the disaster across the world. So why does it capture our imagination? I think it’s because the story of Titanic can be read in so many different ways. There’s the man versus nature story, where human ingenuity loses out against the forces of nature. Or the Greek-style tragedy, where riches and excess meet with a tragic fate. Or there’s the smaller human stories from that day – of the cowardly rich gentleman, the heroic captain, the band that played on as the ship went down. Titanic has so many memorable stories from one disastrous night.