From a stroll around the park to a countryside hike, walking’s taken on a new meaning for many of us over the last year. In the midst of restrictions it’s been a chance to connect with the world around us at a time when we’ve been feeling so disconnected. Over the last year I’ve fallen in love with walking, from following the footpaths around my house to tackling the 102-mile Cotswold Way, and I can’t wait to travel further afield for more UK walks.

AD: This post is brought to you in association with Inntravel

Taking a walk has been an invaluable escape during the last year, slowing life down to a relaxed pace and giving us time to appreciate what’s around us. But if you want to take things a bit further when restrictions allow, how about a UK walking holiday? Britain is blessed with some brilliant walking routes, whether you prefer coast paths or mountain hikes.

As well as being a chance to get out among the UK’s beautiful countryside, walking also helps keep you fit, it usually makes for a fairly inexpensive holiday and it’s a sustainable way to travel which minimises your impact on the environment. So it’s no surprise that walking holidays in the UK are set to be a popular choice this summer.

From the Norfolk coast to the Scottish Borders, I have five UK walking holidays to add to your wishlist, chosen from those on offer by slow holiday specialists Inntravel. Each route is self-guided and flexible, so you can start on any day you choose and add in extra nights, and your accommodation, luggage transfer and some meals are all included.

The Northumberland coast and its castles

Northumberland is one of my favourite parts of the UK, with its mixture of wild coastline and peaceful countryside. It’s also a great place for history lovers with over 70 castles to explore, mementos of a turbulent past which was shaped by saints, kings and Viking raiders.

This relaxed UK walking holiday takes in some of the county’s most famous castles as well as deserted beaches, tasty seafood and accommodation with a warm Northumbrian welcome.

The route begins in Warkworth, an ancient village located on the Northumberland Coast Path. From there you travel north to Alnwick, whose lavish castle featured as Hogwarts in the Harry Potter films. Then it’s on through the seaside towns of Craster and Beadnell before the final stretch to Bamburgh, set in the shadow of its dramatic hilltop castle.

As well as castles and coastal views, you’ll also get chance to spot the area’s wildlife, with Northumberland especially well-known for its birdlife. Keen birdwatchers might want to take a boat trip to the Farne Islands where you can see puffins and other sea birds. And don’t miss trying some of the seafood from Craster, especially its crab and kippers.

The coast of North Norfolk has over 45 miles of coastline to explore, made up of a mix of sandy beaches, marshland and pristine nature reserves. And a walking holiday is a great way to get out and explore Norfolk’s sleepy villages, medieval churches, royal estates and the small harbours which played a vital role in England’s 19th-century trade routes.

This walking holiday starts in Snettisham, where you can visit the Queen’s Sandringham Estate or a RSPB nature reserve home to thousands of wading birds. Then follow the Norfolk Coastal Path to Holhkam, passing the site of Seahenge, a 4000-year-old timber circle.

There’s a choice of routes from Holkham – including a walk which passes dunes and beach huts en route to Wells-next-the-Sea where you can pick up a steam train to Walsingham. Or you can visit to historic Holkham Hall and the pretty Georgian town of Burnham Market.

The last stretch runs to Blakeney or Cley – where you have the option of upgrading to a stay in the quirky Cley Windmill (one on my wishlist ever since I stayed in a lighthouse just along the coast at Cromer). And you can finish off with a seal-watching boat trip, birdwatching in the Cley Nature Reserve or just take it easy in a cosy country pub.

The Tweed and the Scottish Borders

The dramatic Scottish Highlands might get the bulk of the attention, but the Scottish Borders are one of the UK’s lesser-known gems with their landscape of tranquil river valleys, sheep-grazed pastures and low, rolling hills. This is another region which has had a turbulent history, with border disputes between England and Scotland reflected in the battlegrounds, towers and abbey ruins you find across the Borders.

The history and landscapes of the Scottish Borders have inspired artists and writers like John Buchan and Sir Walter Scott, who had a house in the area. This UK walking holiday takes in some of the Borders’ highlights, following the natural course of the Tweed as it winds it way downstream, with salmon, dippers and ospreys often spotted along the way.

Starting in Peebles you travel east to Innerleithen, where you have a day to explore, with a choice of routes including one visiting Traquair House, which claims to be the oldest continuously inhabited house in Scotland and was once a refuge for Mary Queen of Scots.

The final stop at Melrose is where you’ll find its famous abbey, a 12th-century monastic ruin surrounded by gardens where the embalmed heart of Robert the Bruce is buried. Along the way you stay in historic properites including a Georgian hotel and Victorian lodge.

Trails of the Riverbank

I spent a few years living in Oxford, and took plenty of walks along the banks of the Thames – or rather the Isis as it’s known when you’re inside the city – but this walking holiday is a chance to follow the route of England’s most iconic river all the way to Marlow.

Allow some time to look around Oxford’s colleges and take a punt trip on the river before following the Thames Path through peaceful water meadows and out into the surrounding countryside. The first day’s walk takes you as far as Abingdon, where you can visit its ruined 7th-century Benedictine abbey before heading back to Oxford for the night.

Then after a short bus ride to Wallingford – the former home of Agatha Christie as well as being a filming location for TV series Midsomer Murders – you follow the riverside path to Goring where you have a choice of routes taking in stately homes and scenic woodland.

The last stretch of this walking holiday starts in the village of Sonning and follows the river as it zig-zags its way to Henley-on-Thames. You then walk the route of Henley’s famous regatta to the foodie hub of Marlow, home to Tom Kerridge’s two Michelin-starred restaurants.

Dorset is another part of the UK which has great memories for me. I usually visit the coast but this trip focuses on the quieter inland part of the county. It takes in the chalk landscapes of gentle hills, lush green fields and traditional villages with their thatched cottages and character-filled inns which inspired the novels and poems of Thomas Hardy.

The route follows part of the Hardy Way long-distance footpath, which stretches for 217 miles in total. You start in Cranborne where you can follow paths through rich arable land to the ruined 12th-century church at Knowlton. Then it’s on to Farnham as the path follows the border between Dorset and Wiltshire through woodland filled with deer.

From Farnham you can visit 19th-century Larmer Tree Gardens or walk to the medieval villages of Tarrant Gunville and Chettle. Then head north towards Shaftesbury, passing through Win Green – the highest point in the area with views as far as the Isle of Wight.

Finally spend your last day visiting Shaftesbury’s abbey, which dates back to 888 AD, and the cobbled street of Gold Hill, or take a walk through the chalk hills around Melbury Beacon.

Which walking holiday in the UK would you most like to do? 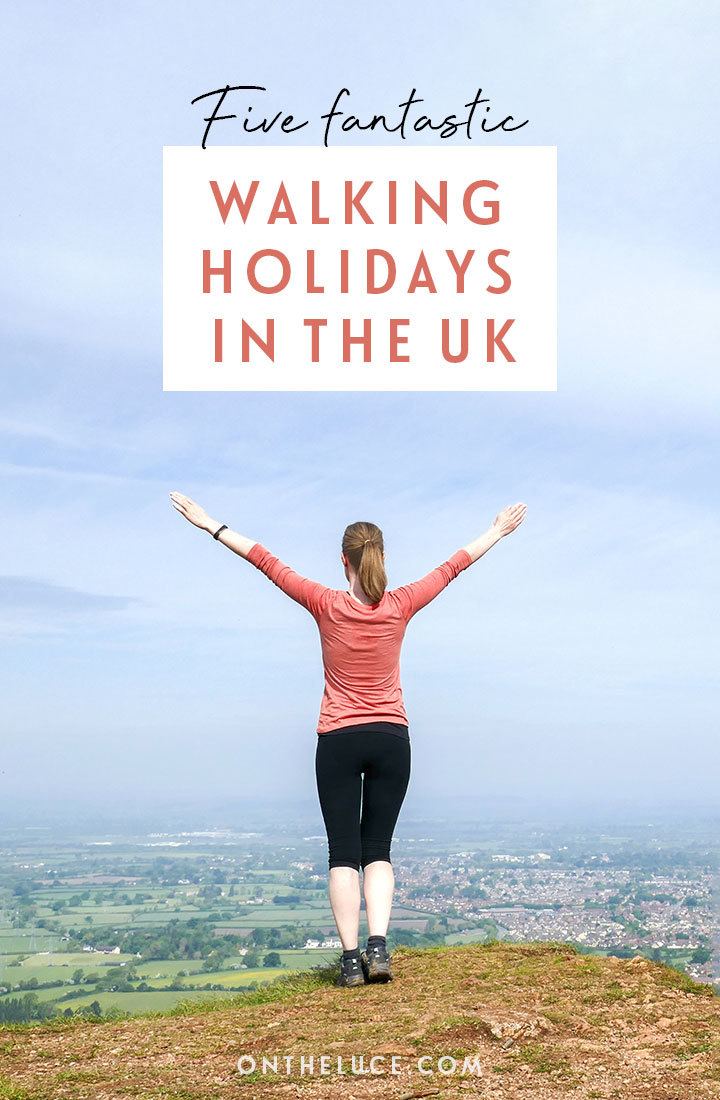 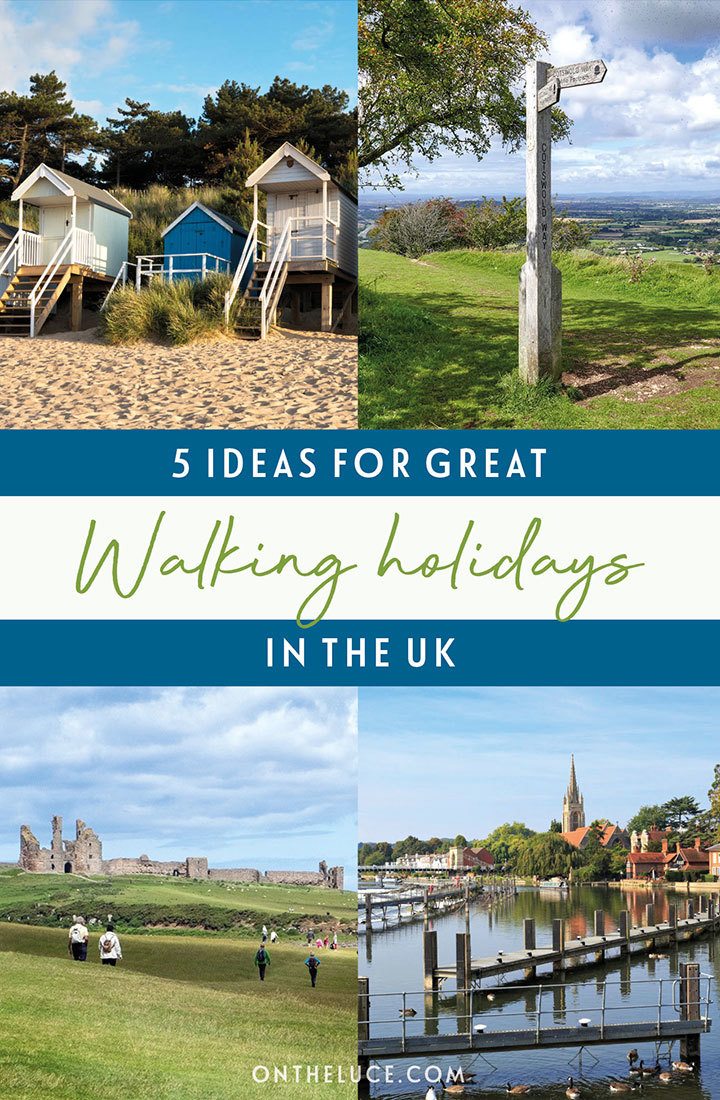 Every year me, my brother and our dad do a weekend hike. It's become something of a tradition. I'd never heard of the Hardy Way but Dorset is mid-way between the three of us, so I will be suggesting this as our first post-covid family-get-together hike. Looks beauitful.

Brilliant, hope you get to do it!

Wonderful walks, and great photos too, Lucy! After the last year, when we've all come to realise the importance of nature so much more, a good UK walking holiday is something to really look forward to... not long now, hopefully :-)

Thanks, yes it's definitely been the year of the walk, can't wait to get back out there!

Great recommendations. I wanted to walk the Hardy Way when I last went to Dorset but I was way too pregnant, haha! I think the Yorkshire Dales are a brilliant location for a walking holiday too.

I've not been to the Yorkshire Dales for years so that's one I must check out too!

Walking along the stroll and countryside is a good way to spend an inexpensive holiday. The walking holidays is an environment friendly way to visit beautiful places.

Definitely, it's such a good way to see the countryside without a high impact on the environment.

Some great walks here. I have to admit, I need to do more hiking in the UK. I mostly do a lot in Central Europe but its time to explore more at home (just as we are opening up from the Covid). I have walked the riverbanks of Marlow which I thought was nice (even did a few runs along here). I think I underestimate the scenery sometimes here as the UK sure has some hidden gems.

So many great places to walk in the UK! I've really enjoyed doing the Cotswold Way and can't wait to be able to travel further afield.