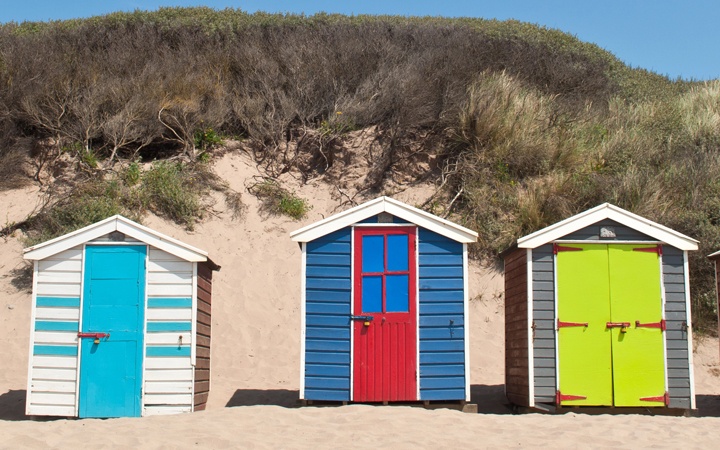 The UK is surrounded by over 7700 miles of coastline, with beautiful beaches from the Scottish islands in the far north right down to the tip of Cornwall in the south. The only problem though is that the unpredictable British weather doesn’t make it the easiest to take advantage of them. I’m all for a bracing winter walk along the coast, but come summer I’d rather be in a shorts and sunglasses than kitting myself out in wellies and waterproofs every time I want a day on the beach. So when the sun does come out here, you’ve got to make the most of it. And with a sunny spell in July, a few free days and two birthdays coming up, my mum and I decided to chase the sun and escape to Croyde in Devon. 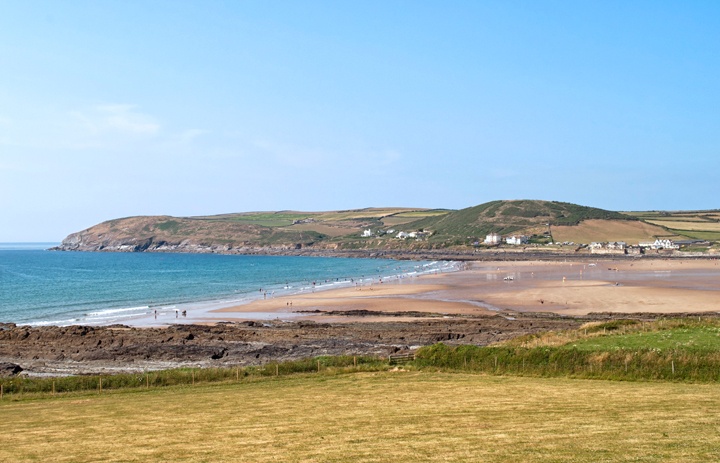 Croyde Bay in the sunshine

Croyde is on the north coast of Devon, in the south-west of England. The coast here is lined with golden sand beaches and pretty coastal villages. And Croyde is your classic English seaside spot, with sandcastles and cricket on the beach, cream teas by day and drinks in the beer garden of a thatched-roofed pub at night. The village is set a short walk back from the beach, which makes up the middle section of a trio of beaches – with Saunton Sands to the south and Woolacombe Sands to the north.

The beaches here face out into the Atlantic so are great for surfing, and you can also try kayaking or stand-up paddleboarding. But we stuck to dry land – it takes something a bit more tropical than Devon’s 17-degree sea temperatures to get me into the water – and explored the coast on foot. The area around Croyde is criss-crossed with footpaths and bridleways so there are plenty of walking routes. We wanted to soak up as much sun and sea air as we could so stuck to these two great coastal routes. 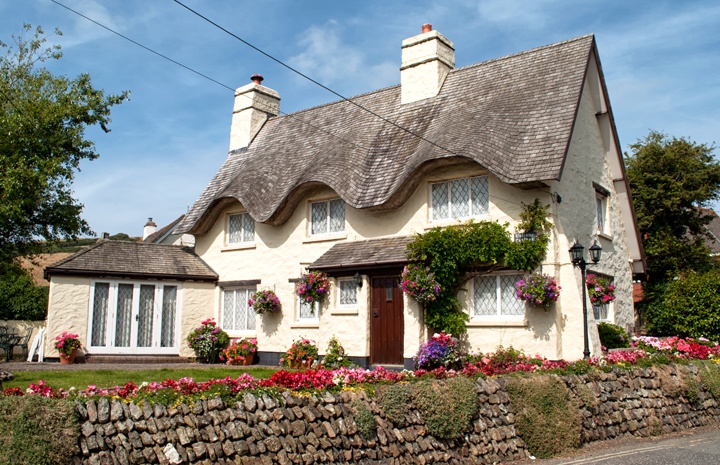 One of the picturesque cottages in Croyde village

Water, map, sunscreen and camera packed, our first day’s walk took us south towards Saunton Sands. We started off with a steep climb along the edge of the fields above Croyde, grateful for the shade as we sweated our way upwards. At the top of the hill we emerged into the sunshine for a panoramic view across Croyde Bay from a perfectly placed bench. The path takes you across farmland at the peak of the hill where you’ll get your first glimpse of three-mile-long Saunton Sands. 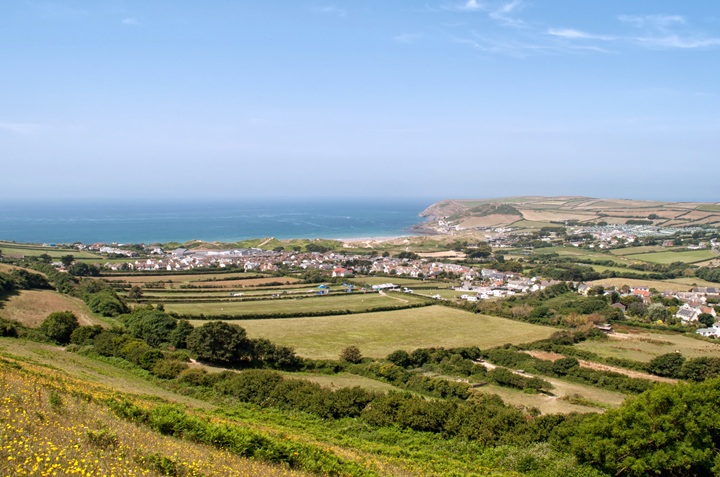 Behind the beach at Saunton is one of the largest sand dune systems in the country – Braunton Burrows. The Burrows are a UNESCO Biosphere Reserve full of unique plants and wildlife. They also stood in for the coast of France when US forces were training for the Normandy landings in WWII. The bay looks uncannily similar to Omaha beach in France and apparently the gradient, size and even the type of sand are all an exact match, so it was the perfect place to practice. You can still see some of the military remains in the dunes, like concrete landing craft built for soldiers to practice disembarking. 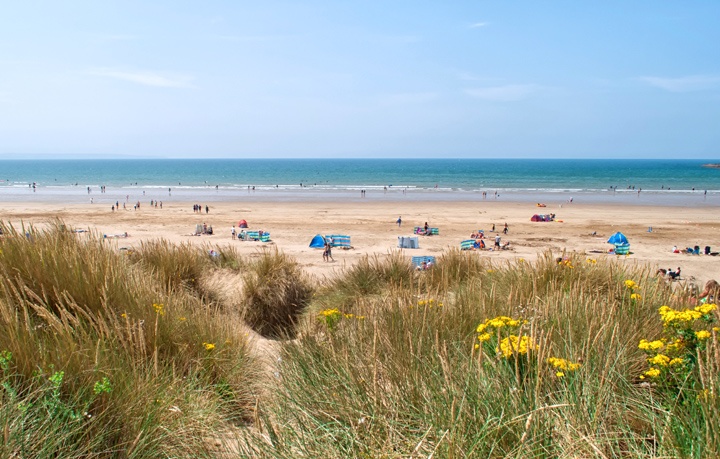 Looking out to sea from the Braunton Burrows sand dunes

Overlooking the bay is the Saunton Sands hotel, which has a terrace bar with uninterrupted sea views as well as a café down on the beach. So we revived ourselves with lunch and a gin and tonic there before heading onwards. Our route back to Croyde followed the Southwest Coastal Path around the headland and then crossed the road and ran along the shore. It ended up back on the beach at Croyde where we could cool our feet off in a rockpool before the walk back into the village.

This walk is just over 4 miles and takes around 1.5 hours (plus photo, lunch and gin and tonic stops). You can find a map of the route here. 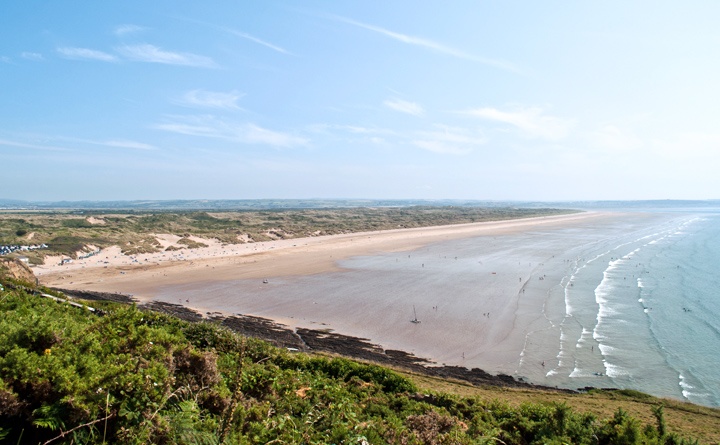 The wide expanse of Saunton Sands from the coast path

The next day we headed in the other direction, north towards Putsborough and Woolacombe Bay. After walking through the village (you can avoid the road by heading towards the beach and then cutting through the campsite) we joined the Southwest Coast Path again. In this direction the path takes you around Baggy Point, a National Trust owned rocky headland. You have to resist the temptations of the Trust’s tearoom on the way though, where the smell of freshly baked scones did its best to divert us off course. But we managed to resist and carried on along the path around the headland. 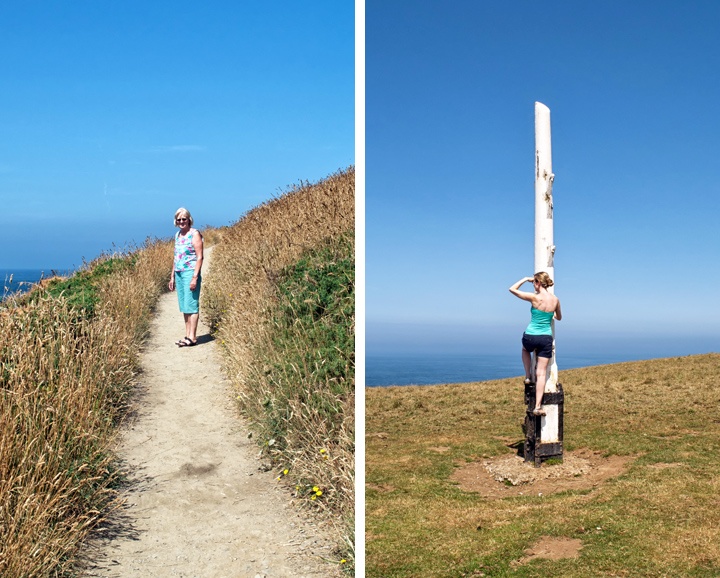 On the path to Baggy Point, and I try out the lookout

Moving away from Croyde, the headland gets rockier and we could see people climbing and coasteering on the cliffs below us. The path also passes what looks like a lookout post, with notches cut in so you can climb up – apparently it’s actually a ‘wreck post’, used as a simulated ship’s mast for coastguard training. As the path rounded the headland the wide expanse of Woolacombe Bay came into view. It’s another mile and a half walk along the steep cliff edge though until you get to the beach at Putsborough – another gorgeous crescent of sand that stretches four miles to the town of Woolacombe. 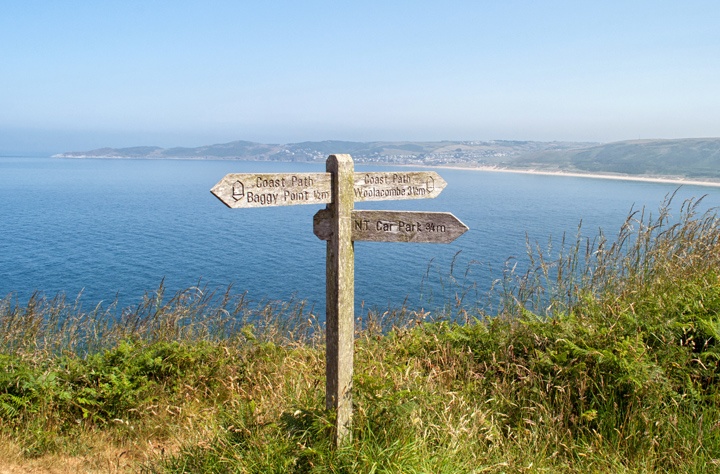 One ice cream and paddling session later we climbed back up the hill towards the village of Putsborough. You can take the coast path across the fields which comes out in the National Trust car park, but we headed inland towards Croyde. The path ran along a narrow bridleway past the flower-filled gardens at Combas Farm before coming out among the thatched cottages on the edge of Croyde.

This walk is around 5.5 miles and takes around 2 hours. You can find a map of the route here. 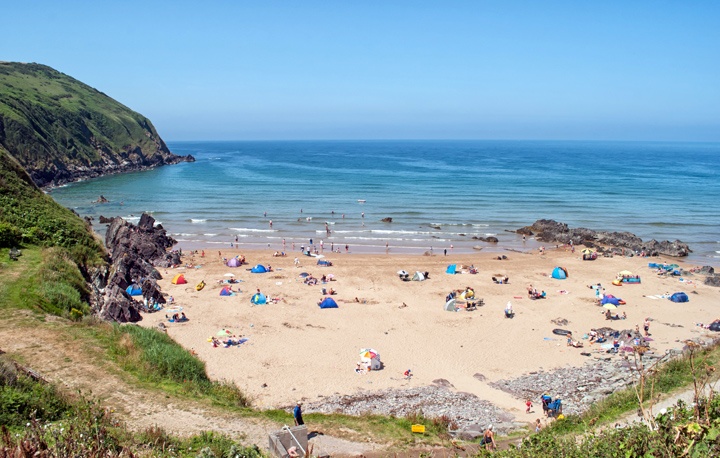 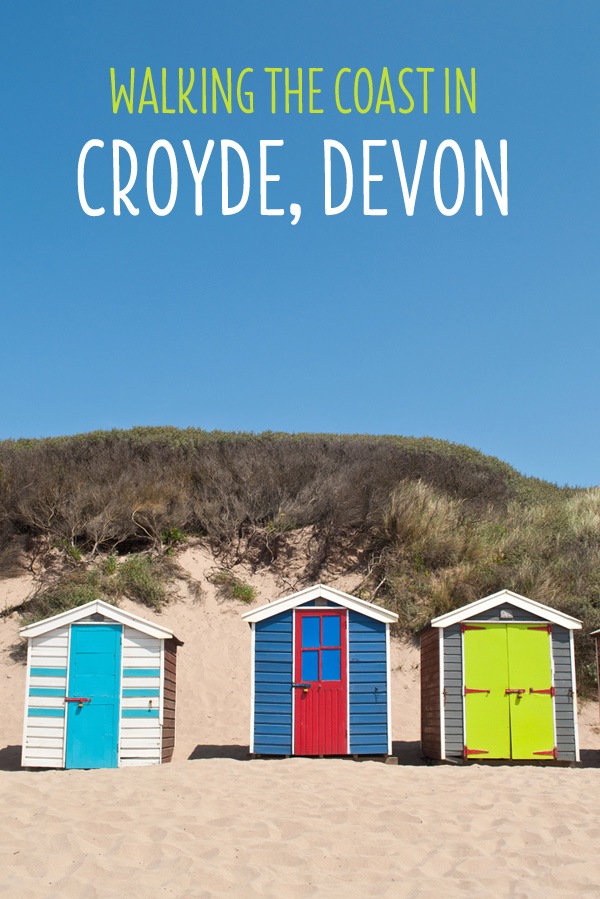 What a beautiful walk following the coastline! Whether you’re visiting Devon on holiday or are a local, there’s always a lot of wonderful nature walks to discover to help you to increase your appreciation of the English countryside.

Thanks Jane, yes it's a lovely part of the country to explore.

Came to have a look at your walks Lucy courtesy of your link on Jo's Monday Walk as I drove past Woolacombe, Croyde and Saunton Sands a few years ago but didn't stop as parking was £5 (at each place) and we only wanted to stop for an hour or so. A lovely part of the west country though and if I do go back I shall certainly see if I can do these walks :) Jude xx

Thanks Jude. It's a lovely part of the world and there are some great walks around there. We only did a taste this time but I would love to come back and walk a longer part of the coastal path someday.

Hi Lucy :) I remember your picture postcard views of Croyde. Many thanks for sharing. I can't open those maps on Google Chrome but it might just be me. I never did check out walkjogrun so I'll try it tonight.

Thanks Jo, nice to revisit it – brings back lots of good (and sunny) memories. Strange about the maps, seem to work on on my computer (using Firefox), hope you have better luck later!

Devon looks beautiful - I absolutely love your lead photo on this post. Would look amazing as a print on canvas!

Thanks! I've got a photographer friend who takes great photos of the beach huts in Southwold so as soon as I saw them I thought I'd have a go.