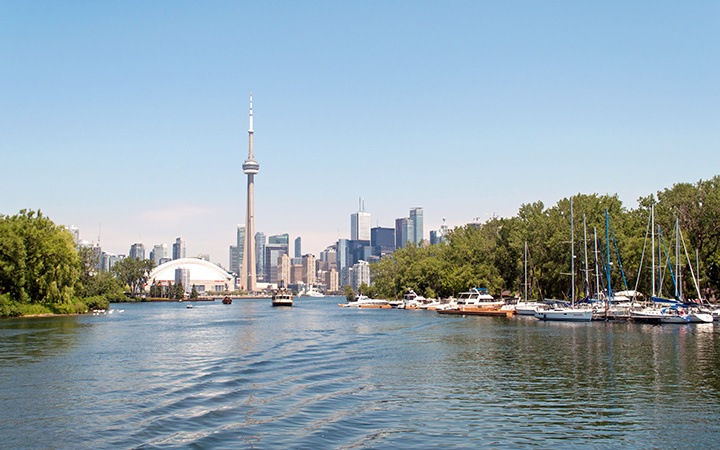 It’s a summery Wednesday morning in Ontario. From our boat we can see children splashing in the shallows and building sandcastles on the shore. A canoe rests on the water’s edge and a group of friends picnic under a shady tree. Families carrying ice creams follow the waterside path past a neat line of sailboats. It’s a picture-perfect scene straight from a beach town or lakeshore resort. But if you turn your head then a row of skyscrapers comes into view, and towering above them all is the CN Tower. These are the Toronto Islands, just a few hundred metres offshore from downtown Toronto but a whole different world away.

Toronto was the final stop for my sister and I on our 4500km road trip across central Canada from Calgary to Toronto in a Cruise Canada RV (motorhome). We’d spent the last two weeks travelling across wide open prairie roads and camping in the wilderness of Ontario’s Provincial Parks, so city life was a bit of a change of pace. We only had one day to get a taste of what Toronto has to offer, but after spending so much time at Ontario’s lakes along our journey, it felt only natural that we’d gravitate straight for the waterfront. 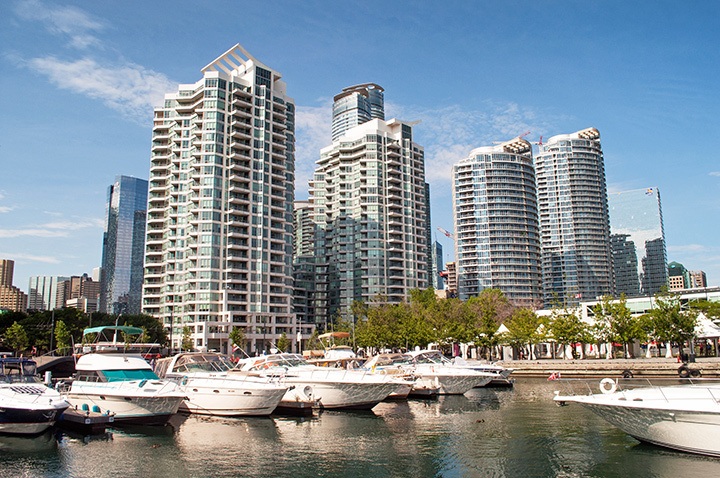 Toronto’s waterfront stretches for 28 miles along the shore of Lake Ontario. Forty years ago it was a mess of concrete and derelict industrial buildings from its days as a major shipping port. But in the 1970s the government decided to transform it in one of the largest urban regeneration programmes in North America. The waterfront has traded factories, warehouses and roads for parks, apartments and bike lanes. 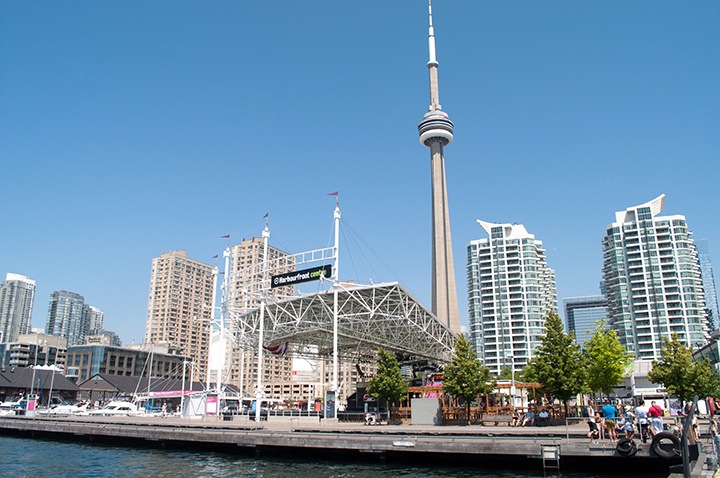 Our first stop was right at the heart of the regenerated area – the Harbourfront Centre. This 10-acre site is run by a local non-profit group to bring arts and culture to the Toronto waterfront. Warehouses and power plants have been converted into theatres, galleries and studios, and there’s an outdoor stage and public squares to relax in. They host over 4000 events each year so there’s always something going on. We spotted a group of would-be painters trying their hand at capturing the city skyline in a lunchtime art class. And there were posters for morning tai chi and yoga sessions as well as concerts and plays. 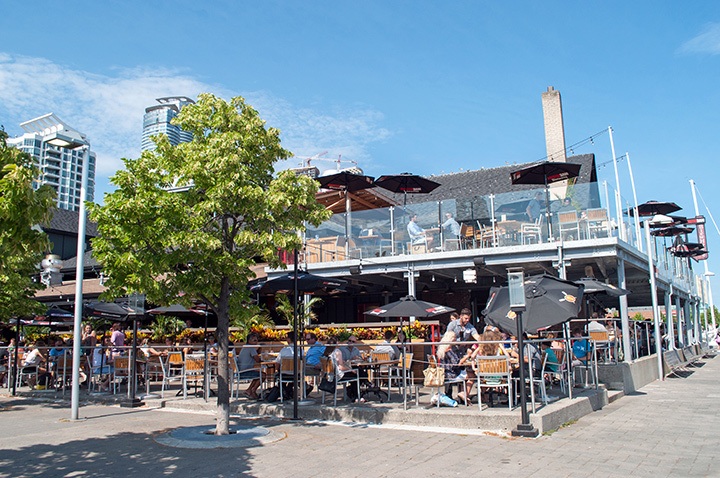 We took a break from the sun at the Amsterdam Brewing Co. This brew pub has a prime position on the waterfront, perfect for people-watching. Maybe it’s those long cold winters that make the Torontonians embrace the summer as hard as they can, but the waterfront was packed with walkers, joggers and cyclists. Ready to burn off our lunchtime burgers and beer flights, we joined them on the waterside pathway. Along the way we crossed bridges and skirted a police boat dock and a sandy urban beach covered in sun loungers – there’s plenty to see as you walk, but it was time to get out onto the water ourselves. 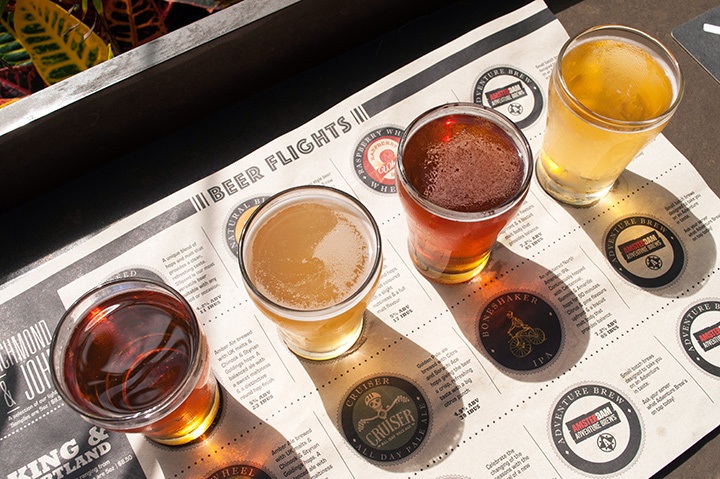 Our destination was the Toronto Islands. Ferries run across to the islands from the Jack Layton Ferry Terminal, or you can take a sightseeing boat trip around the harbour that calls at the islands. As our boat pulled away from the waterfront and headed out into the harbour, we got the perfect panorama of the Toronto skyline. A line of skyscrapers stretched out along the water’s edge, with the CN Tower high above them all. And down below the water was dotted with sailboats, canoes and paddleboarders. 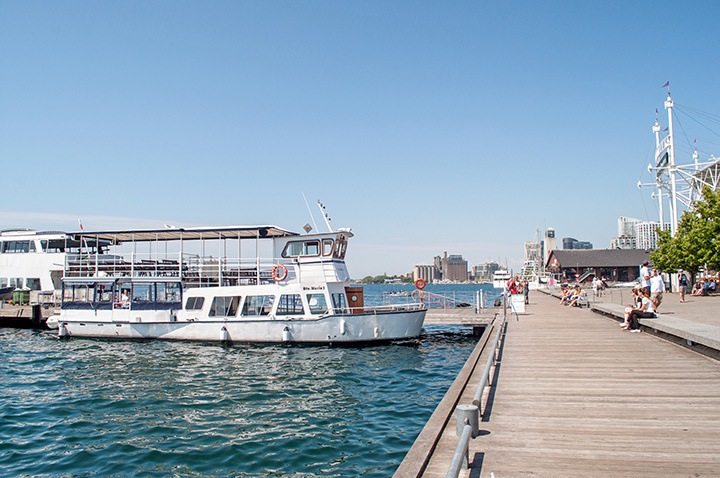 Our ride to the islands

At their closest point the Toronto Islands are only 100 metres from the city. But where the city is always developing and looking to the future, the pace of life on the islands is a lot more relaxed. They’re North America’s largest urban car-free community, and an escape from city life where you don’t even really have to leave the city. Each of the 15 islands is different. Centre Island is the largest and is the holiday island with beaches, gardens and an amusement park. Ward and Algonquin Islands are residential. Then there are the island bases for the local yacht clubs, and finally the islands left as parkland or nature reserves. 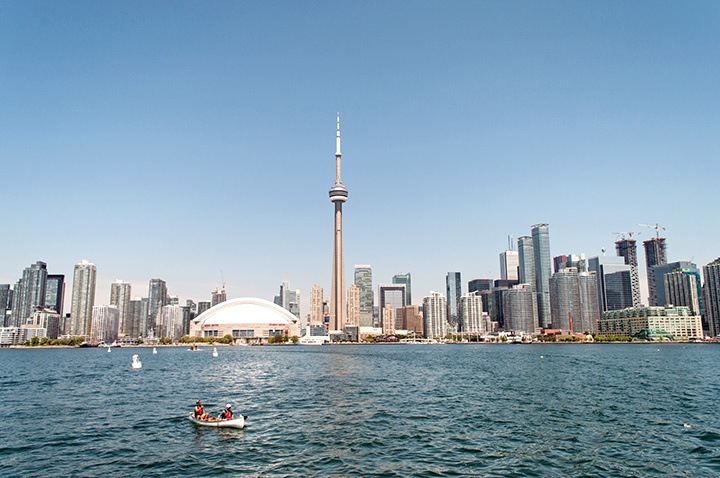 Sailing out to the islands

Things haven’t always been this way though – in fact the islands haven’t even always been islands. They started life as a peninsula connected to the mainland, and it was only after a huge storm in the 1850s that they were separated. The first visitors to the islands were the Ojibwa First Nations people. They used to bring their sick to the peninsula to recover, and it’s still sacred land for them. The first building was a British garrison in the 1790s, followed not long after by the Gibraltar Point Lighthouse in 1808. It’s still standing today which makes it one of Toronto’s oldest buildings. Legend has it that the first lighthouse keeper was murdered by a gang of drunken soldiers in 1815 and his ghost still haunts the lighthouse. 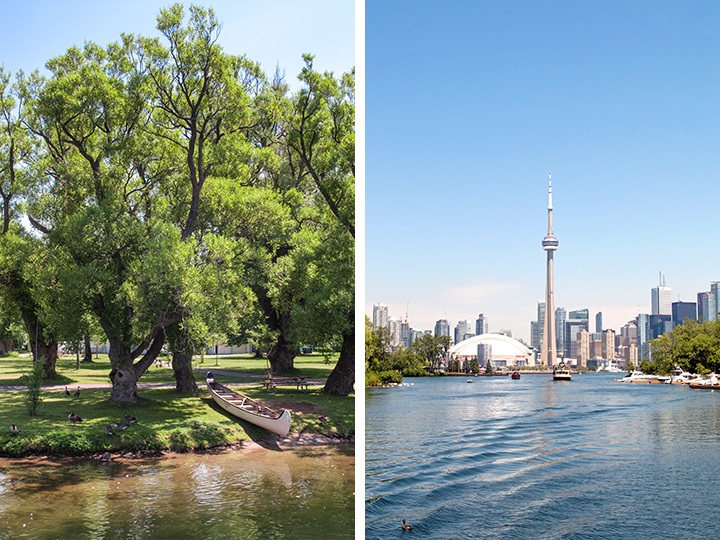 The Toronto Islands became a retreat for wealthy Torontonians who built summer houses away from the city heat and spent the season at the yacht clubs. By the 1940s the islands had developed their own town with an amusement park, baseball stadium, movie theatre, hotels, restaurants and 630 houses. But in the 1950s the government started reclaiming land to turn it back into parkland. It was a controversial plan – especially among the homeowners who fought for years to keep their houses. Leases were eventually granted for 300 homes and people live there year-round with their own schools and church. 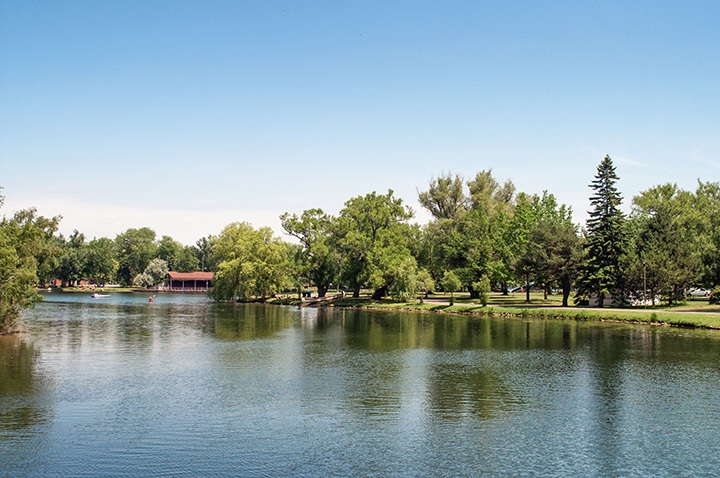 You can visit Ward and Algonquin Islands to see the original 1920s houses and their gardens. Though amazingly 31 of the cottages were moved by barge when the airport was built in their original location on Hanlan’s Point. The rest of the islands have plenty of space to relax in. There are four sandy beaches – though Hanlan’s Point’s beach is clothing-optional so make sure you know which one you’re visiting! – and plenty of waterfront paths, bridges and boardwalks to explore. Families usually head to Centre Island with its pony rides, swan boats and maze. Or you can hire a bike and cycle through the forests paths. But we just had time to sail through the waterways and around the islands before heading back into the city. 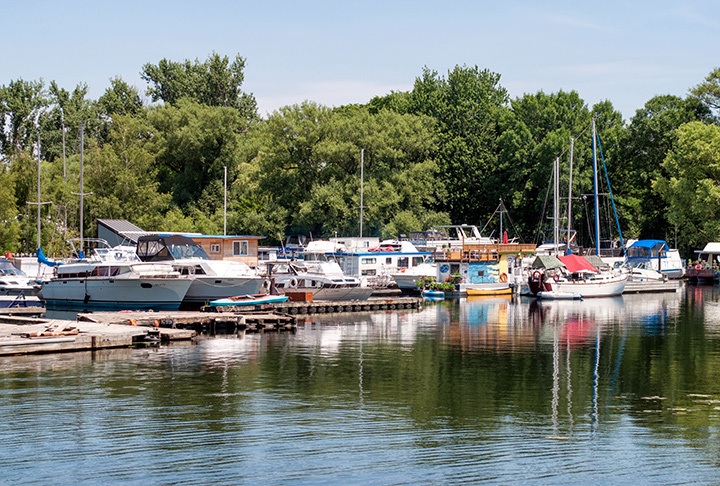 The waterfront from above

Back on the mainland, we couldn’t leave Toronto without paying a visit to its most famous building. So our final city stop was the CN Tower, giving us a view of the waterfront from a totally different perspective. It was built in the 1970s as a communications tower and was the world’s tallest tower for the next 30 years. From the observation deck 338 metres up we got a prime view over the harbour. 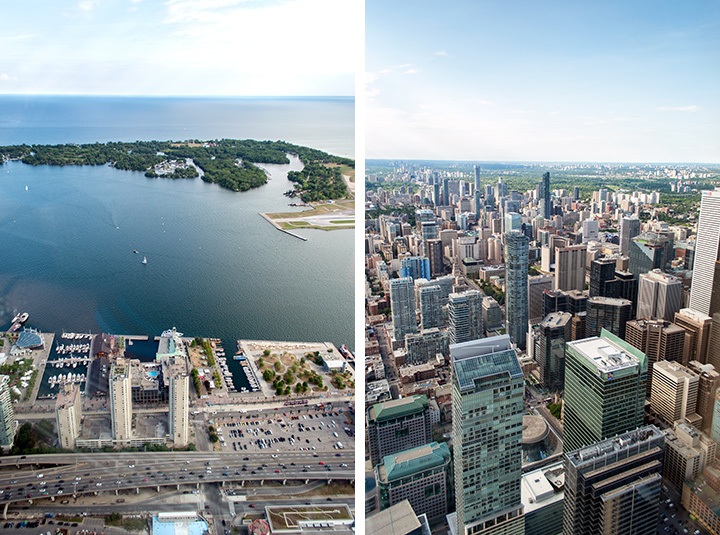 The islands and city from the CN Tower

Along the waterfront you could see docks packed full of tiny white boats and beyond them were the islands. From above it’s much easier to see their layout and how they connect together. Compared to the city on the other side they look so small, but it was their position that sheltered the mainland and made this a good location for a city. The waterfront might be constantly changing but it’ll always be the heart of Toronto. 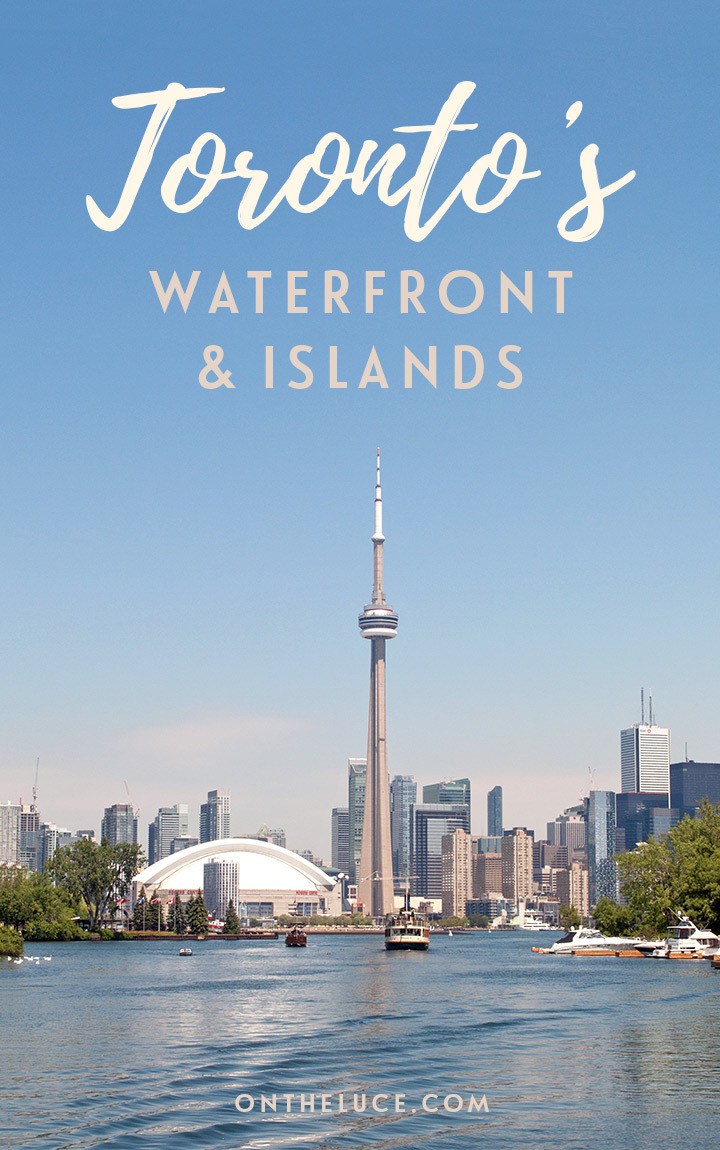 I visited Toronto as a guest of Destination Canada as part of a Travelator Media campaign.