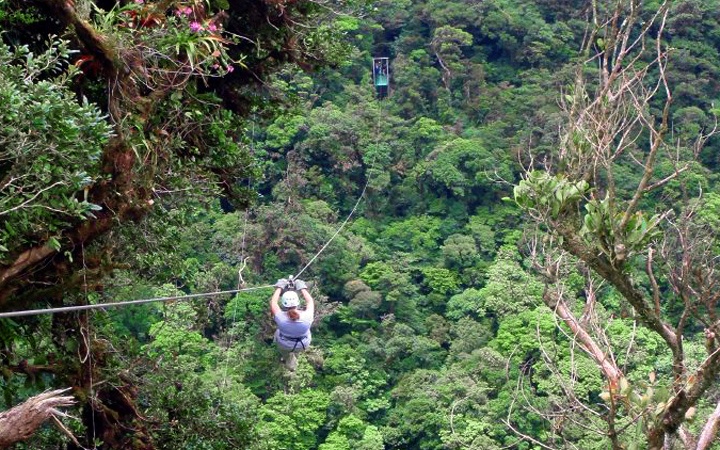 As I whizzed along a wire 100 metres high among the treetops, it occurred to me that this definitely wasn’t your usual way to explore a nature reserve. But to really see much of the Monteverde Cloud Forest, you’ve got to get up high. The reserve covers 26,000 acres of rainforest with over 2500 plant species, 400 types of bird and hundreds of butterfly, insect and mammal species. Though it’s not all that easy to spot them, as the clouds that give the forest its name lay over it like a blanket much of the time. The forests are formed when moist winds blowing from the coast collide with the mountain range and condense into a fine mist. It might not be good for visibility, but the weather has its benefits, providing water and nutrients that allow plants to grow up in the forest canopy and provide habitats and food sources for so many species. 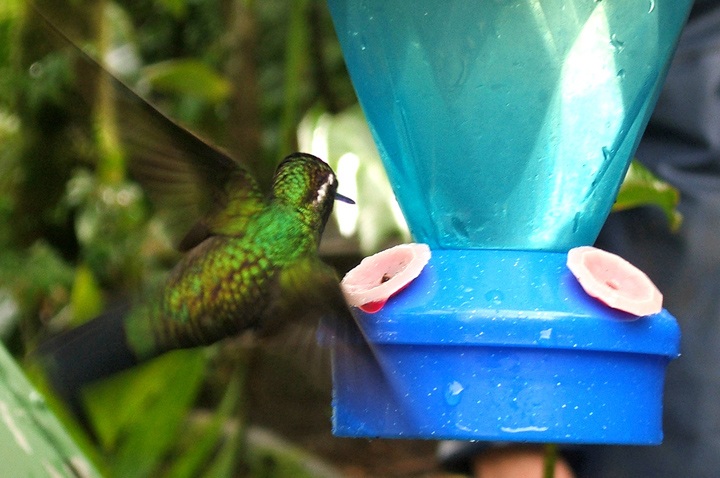 A hummingbird feeding in Monteverde

For a more conventional way to see the cloud forest, there are walking trails in Monteverde Biological Reserve – though bring your walking boots as it gets pretty muddy. Down at ground level you’ve got the best change of seeing mammals like the coati or jaguar among the lush vegetation. But because of the thick foliage, not much light gets down here, so many of the rainforest species are found a lot higher up.

The easiest way to get up among the canopy is on the Sky Walk. After taking a cable car up 200 metres into the clouds, you follow a walking route across platforms and suspension bridges through the treetops. The clouds were out in force when I was there, so we were given fetching blue ponchos to stop us getting drenched by the mists. On a better day you can spot insects, butterflies and birds among the trees, including the fantastically named bird known as the Resplendent Quetzal. 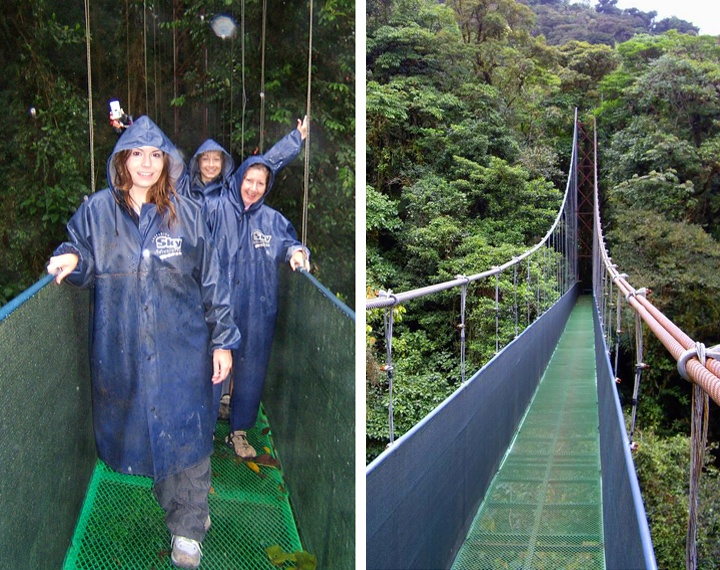 The (slightly damp) suspension bridges along the Sky Walk

But if you want to feel like a bird, rather than just look at them, you can fly through the forest yourself on the Sky Trek zip-lines. They have 10 different zip-lines, ranging in height and length. After being kitted up with harnesses, helmets and gloves and given a safety briefing, I waited nervously for the first line. The first cable is around 40 metres above the ground and runs between the trees, sometimes so close that it looks like you’re going to touch them. As you push off and speed along the cable, it felt strangely peaceful being among the canopy on your own, and there’s not much time to notice how high up you are.

The cables got higher, faster and longer after that as the adrenalin started pumping. And with the heavy cloud cover, sometimes you just disappeared into the mist as soon as you left the platform. The final line was the most exposed, on a tall platform in a clearing, 100 metres high and 750 metres long. Because the cable is so long, we had to be teamed up with someone else and zip-line as a pair to gain enough momentum to reach the end. Or at least that was the plan, until my partner and I ended up stranded about 20 metres from the end, dangling helplessly. One of our guides had to climb out along the wire and haul us back in – a slightly undignified end that brought us out of the clouds and back down to earth. 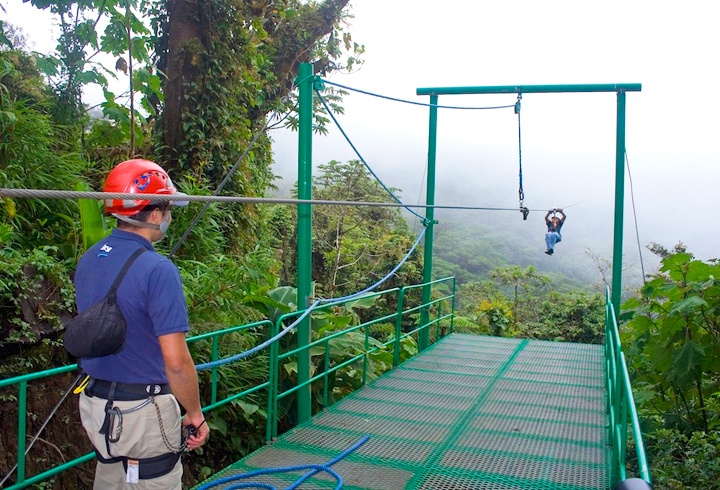 I did my zip-lining trip with Monteverde’s Sky Adventures, who offer a variety of different packages. It costs $77 per adult for the Sky Trek, with the cable car up and zip-line down, with reduced fees for students under 25 ($61) and under 12s ($48). Or it costs US$35 ($28 for students/$22 for children) for the Sky Walk. 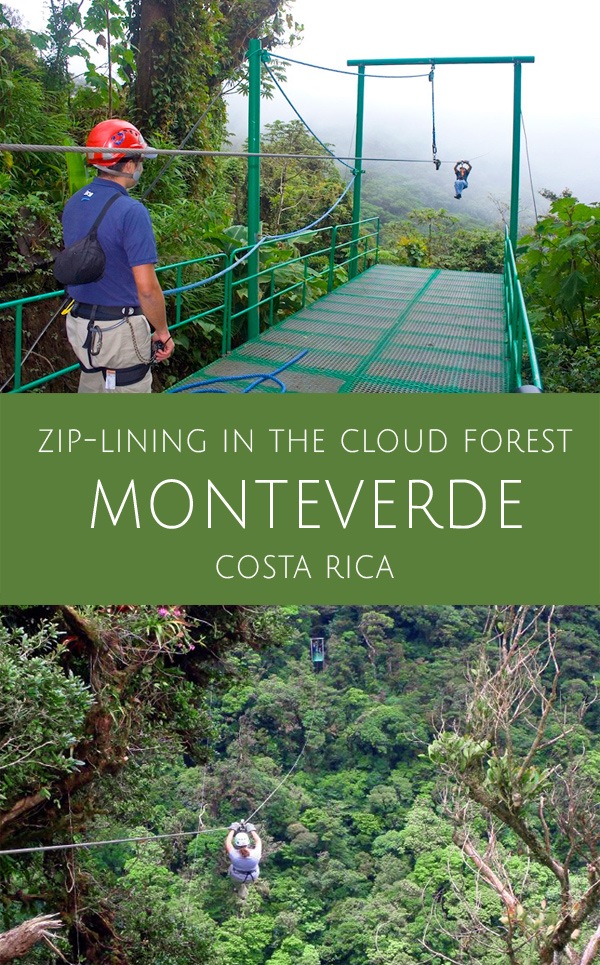 I just did this at Selvatura Park last week! It was probably the best canopy tours I have done in Costa Rica (over 10). Monteverde is so beautiful and the hummingbirds are pretty cute

I loved Monteverde, the rain wasn't so great but the scenery and those hummingbirds were so beautiful!

[...] splashed out on some memorable experiences like a helicopter trip over Mount Cook in New Zealand, zip-lining in Costa Rica, and swimming with stingrays in the Cayman [...]

This looks amazing! I'd love to try it sometime even though I'm not good with heights.

I'm not brilliant with heights either but you go by so fast I didn't have time to get too freaked out by it, the adrenaline rush helped too!