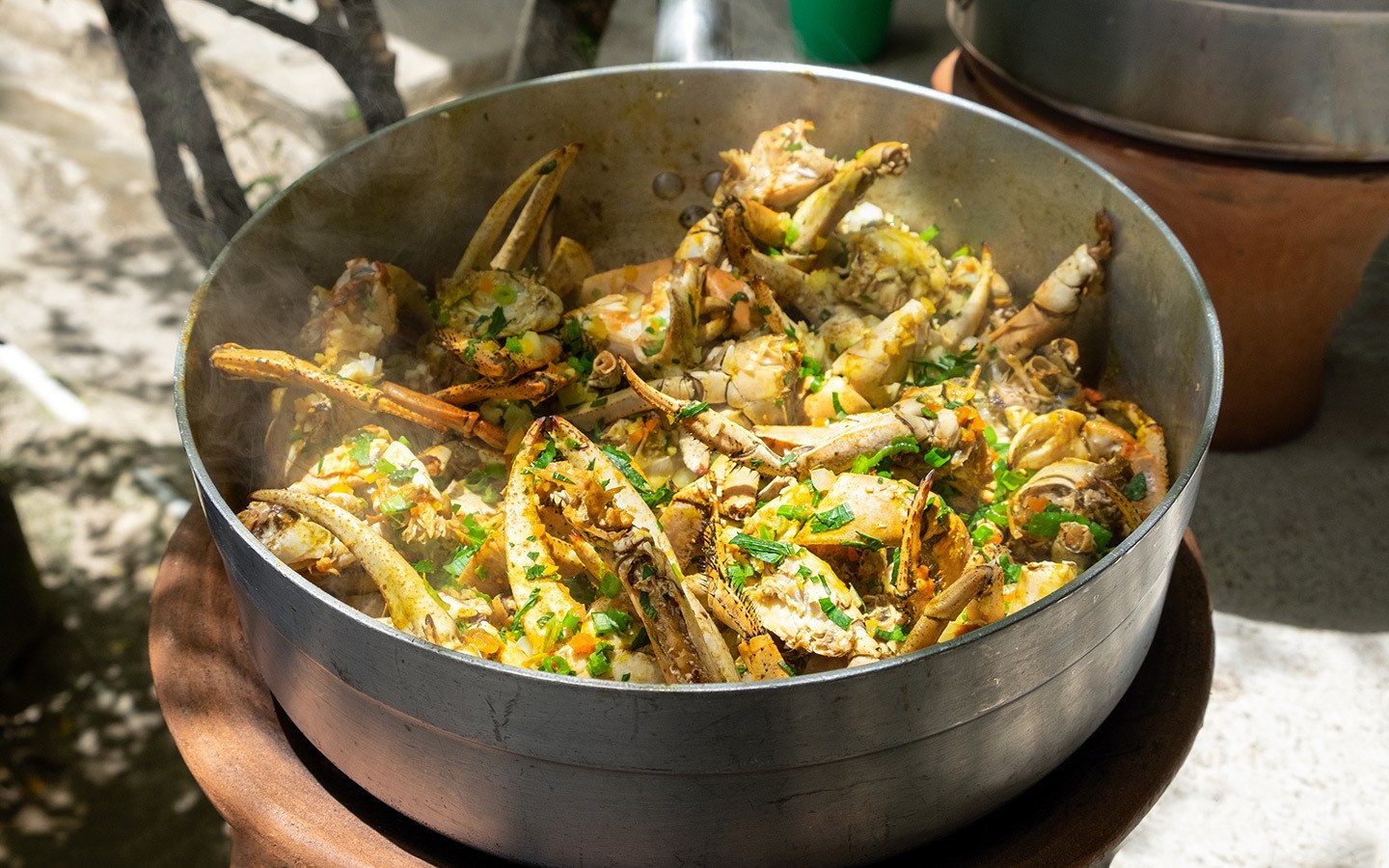 The food on the Caribbean island of Saint Lucia is a real mixture of influences – take West Indian produce and Creole cooking techniques, add a touch of French flair, some British imports and a pinch of African and Indian spice. But what all Saint Lucian food has in common is that’s it’s packed with flavour. From the fresh fruit and vegetables grown on the island’s rich volcanic soil to the herbs and spices, and the mahi mahi and snapper straight out of the ocean. Mix it all together and you get dishes like saltfish and green fig, pepperpot stews and accra (spicy fishcakes). So on my trip to Saint Lucia with Cap Maison, I set out to taste the island from market to plate, through traditional Creole cookery to high-end gourmet Caribbean cuisine. 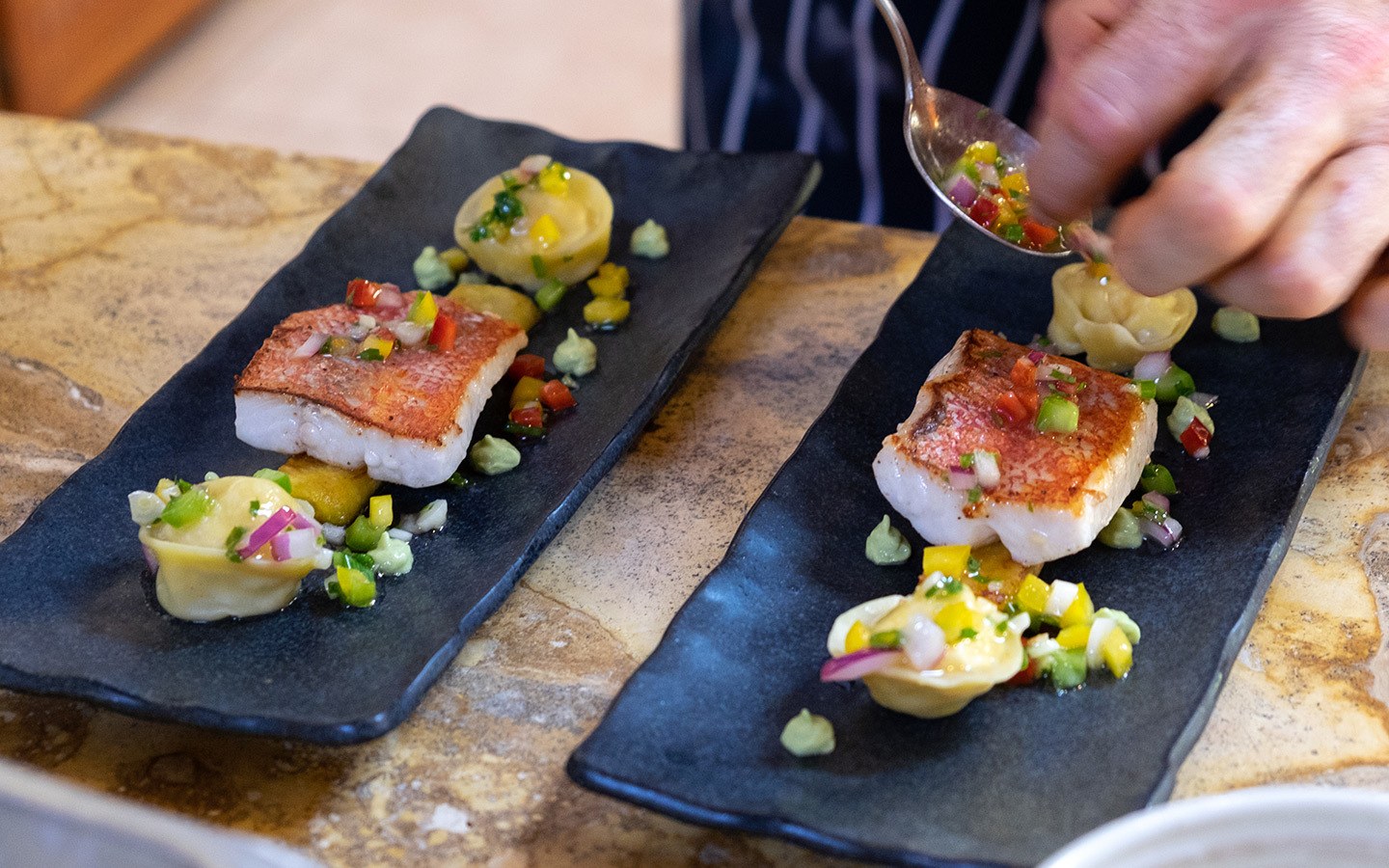 Plating up at Cap Maison

Saint Lucian cuisine is all about the freshest ingredients, so our first stop was the market in Castries, where locals, tourists and the Cap Maison kitchen team come to buy the best island produce. The market takes place every day except Sunday, but it’s busiest on Saturdays when farmers come from all over the island to sell their goods. The market’s been running since the 1890s and has expanded to over 300 stalls selling fruit and veg, spices, rum, fish and flowers, with a separate section for crafts, clothes and gifts. 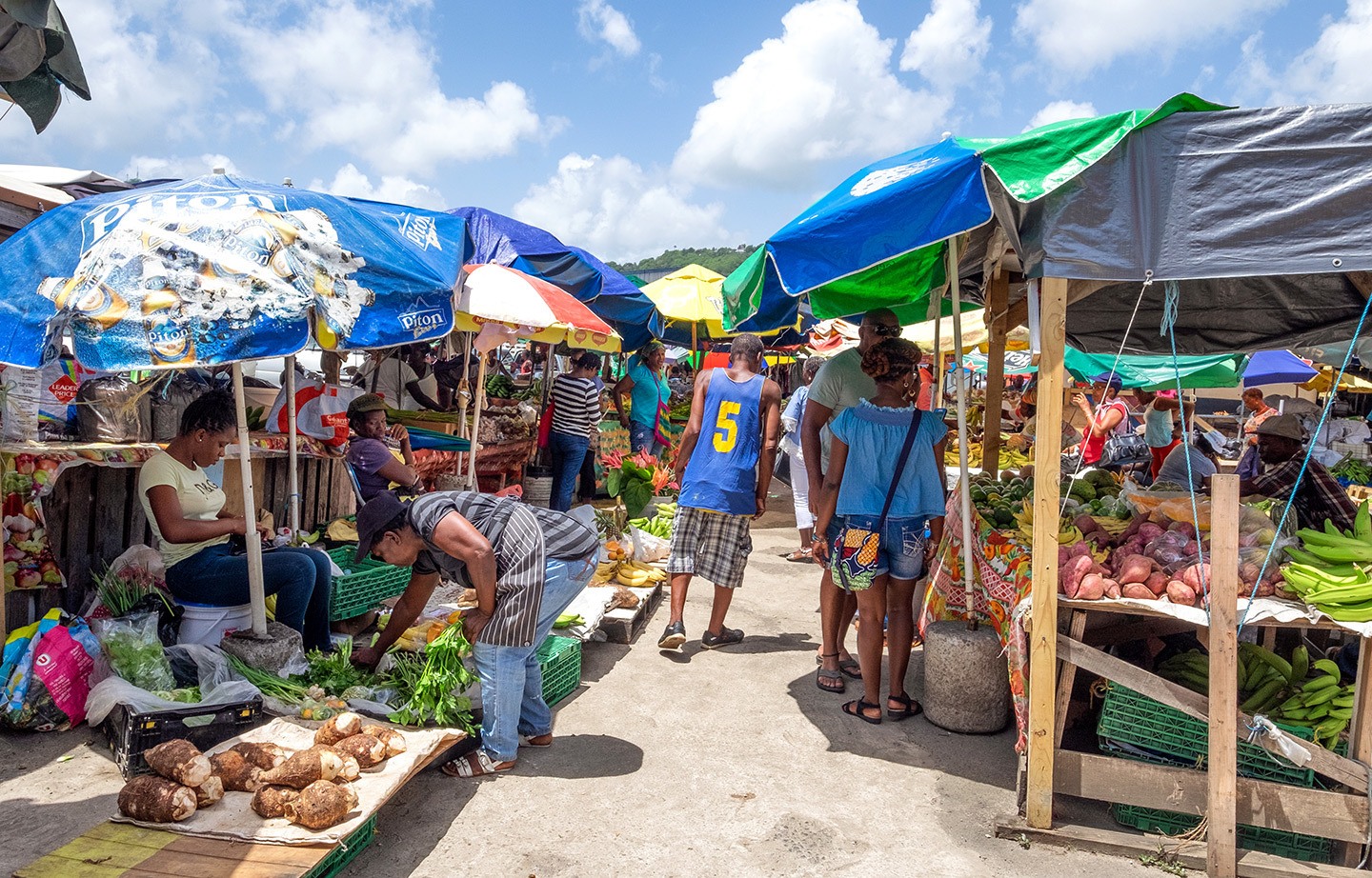 Walking into the market hits all your senses at once. There are the bright colours of umbrellas shading tables piled high with tropical fruits. The smell of nutmeg and cinnamon sticks warming in the heat. The sound of people bargaining and catching up on island gossip. Chef Edna took us around some of her favourite stalls to pick up a few ingredients. She didn’t have a shopping list, instead it was all about what looked, smelled and tasted the best – a world away from online shops and pre-packaged supermarket food at home. 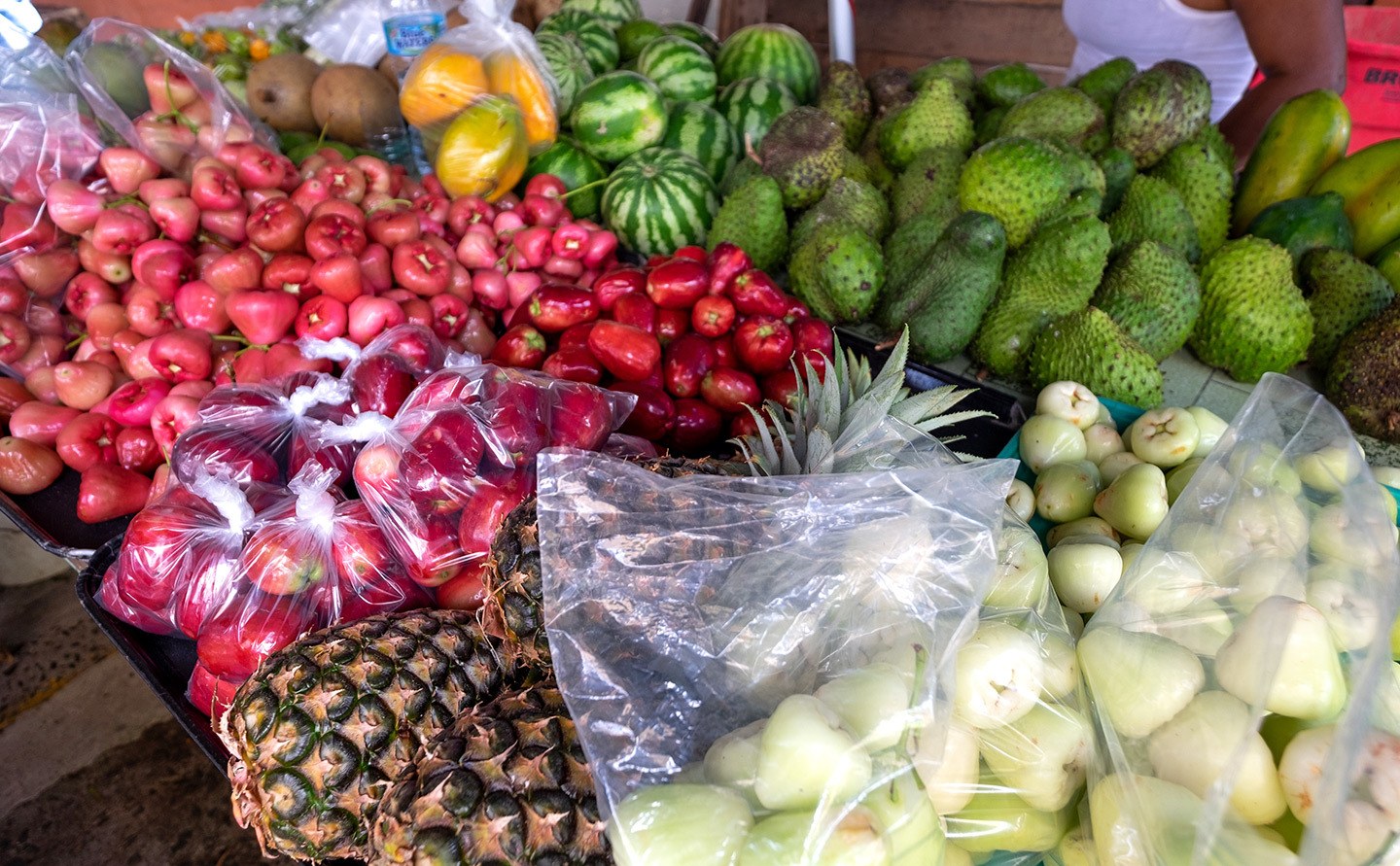 We’d already seen trees weighed down with bananas and mangoes as we drove around the island. But here in the market there were hundreds of different fruits of all colours, shapes and sizes. Some like pineapples and soursop I knew, some like breadfruit and custard apples I’d heard of, and a whole lot more I’d never seen before. Like the brilliantly named fat pokes – sour round red fruit the size of a plum. We even came across a banana cane that chef Craig had never heard of in 20 years cooking and living on Saint Lucia. 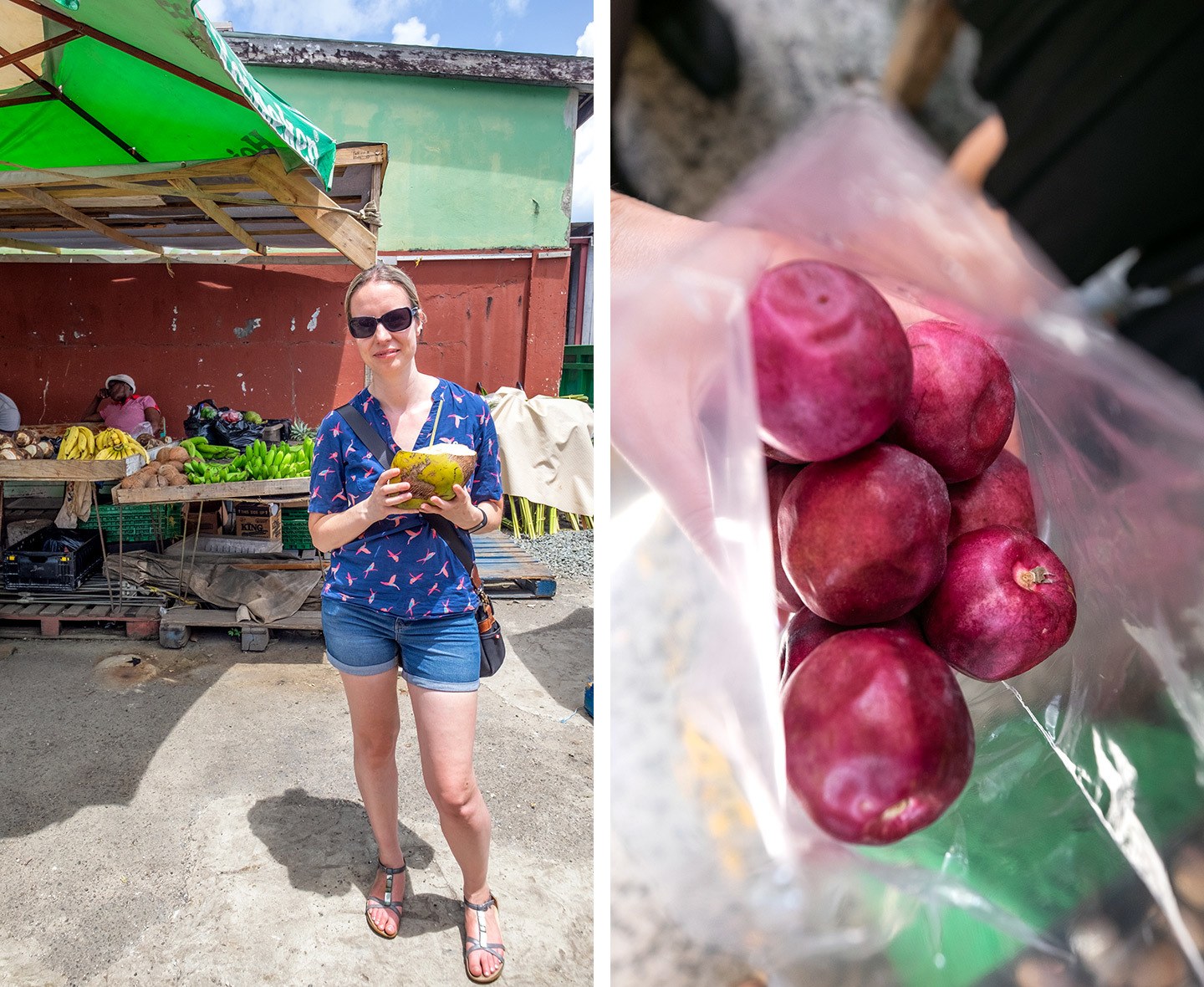 We cooled off with a fresh coconut, with the top chopped off with a machete right on the stall and a straw to drink the water and dig the jelly out from inside. Despite the fact that were all-inclusive at the hotel and had been eating and drinking non-stop, we still left the market piled high with fruit – a huge pineapple, tiny ripe mangoes, bags of soursop and fat pokes. On the way out we passed a line of food stalls where you can try freshly prepared local dishes made with market produce, but we had our own cookery to do. 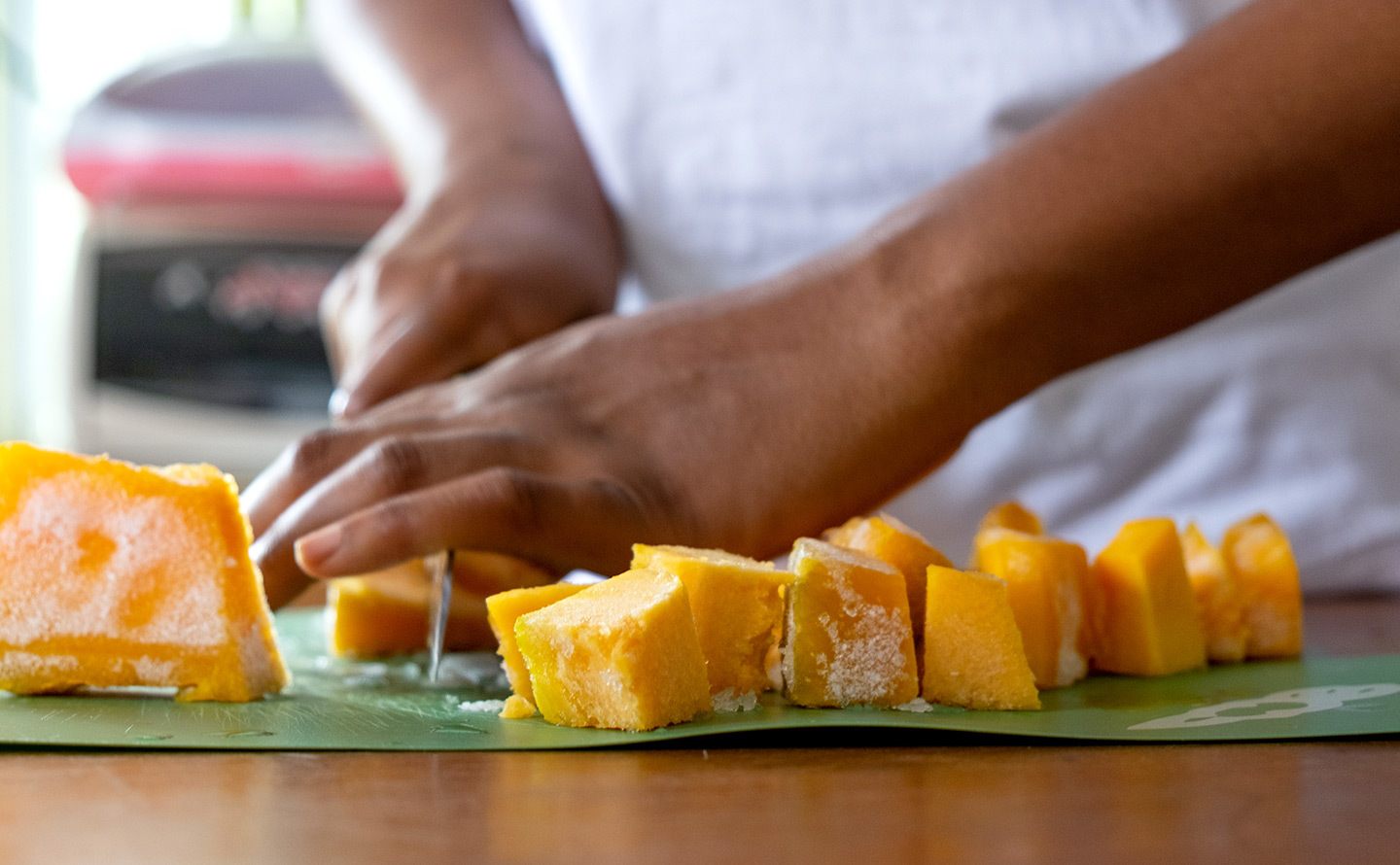 Preparing pumpkin for the bouyon

Trying out the local food and drink when you travel is such a big part of experiencing a new destination and culture. But sometimes it’s hard to know if you’re getting the real deal, or whether hotels and restaurants are adapting things to make them tourist-friendly. How can you find out how people really eat at home? By going and eating with them! Local cookery classes seem to have exploded in popularity recently, and I can see why. It’s such a good way to get to know the people and the food in a place you’re visiting. 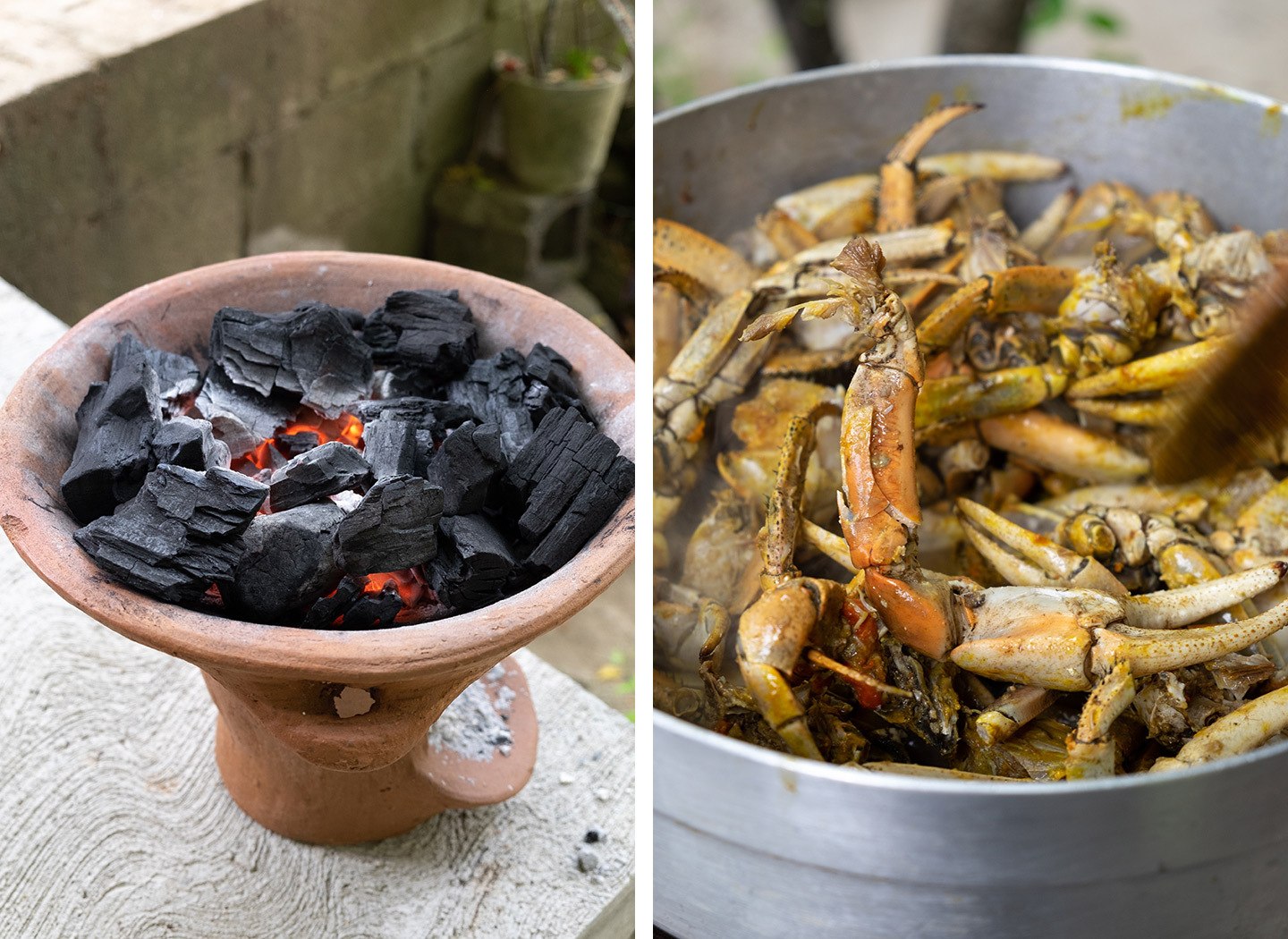 We spent the morning learning about Creole food in Saint Lucia with Auntie Madeleine at her house in the village of Gros Islet, a few minutes from Cap Maison. This is a real family home, with the kids dropping in to watch or show us their latest Lego. It made it super relaxed and easy-going – we just pulled up a chair at the kitchen counter and joined in. On the menu were two different traditional dishes. First up was bouyon – a thick stew with mutton, red beans, vegetables and what are known as ‘ground provisions’ (starchy vegetables like yams, plantains and green figs). And second was fresh crab cooked in a coconut curry sauce. 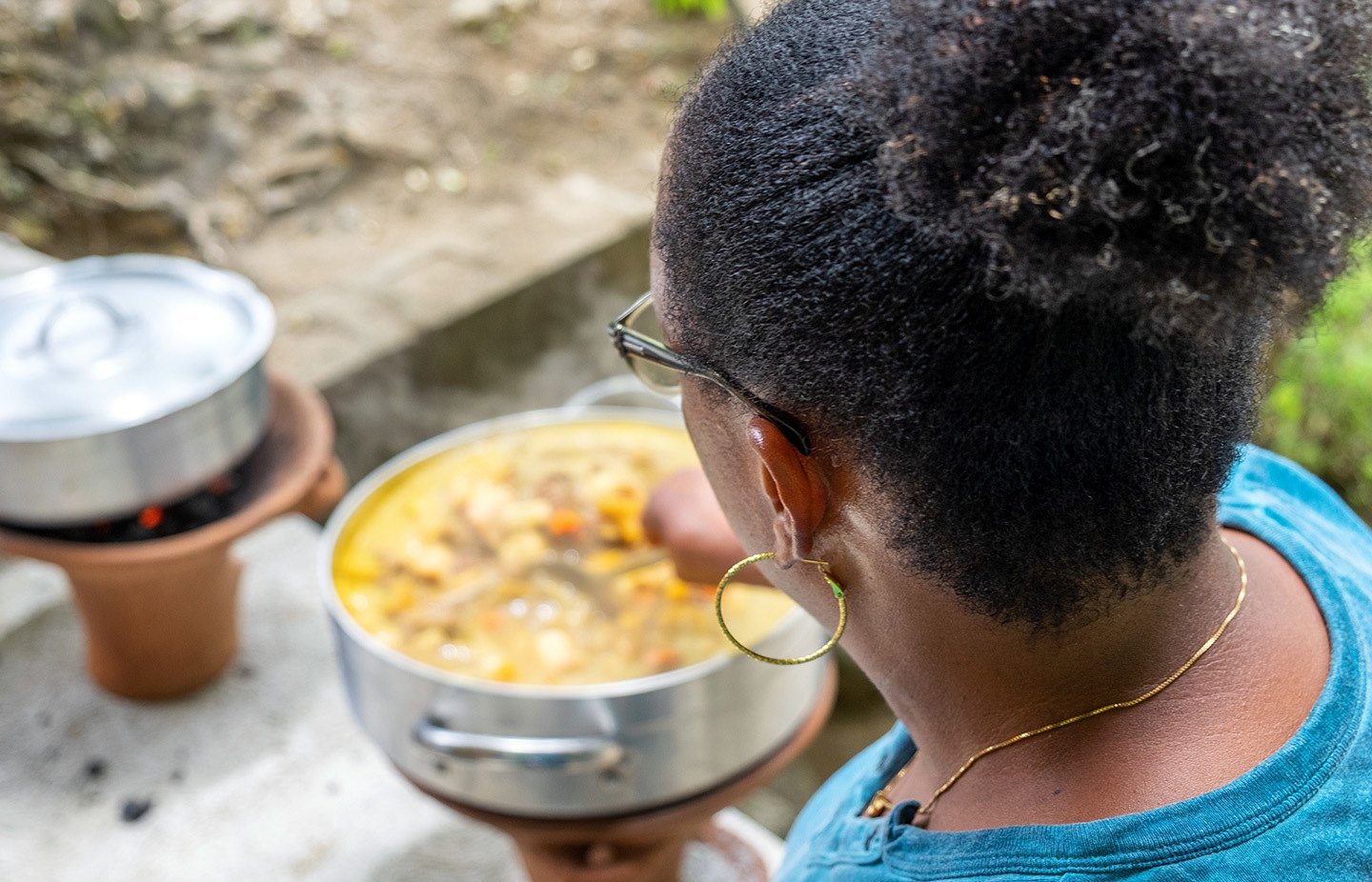 The traditional way to cook in Saint Lucia is using a clay cooking pot full of charcoal, and Madeleine had a couple of these ‘coal pots’ set up outside the back door. It’s a simple but really effective way to cook one-pan dishes. The mutton and beans for the bouyon were already bubbling away in the pan, and next to go in were the ground provisions – in this case green bananas and green figs – followed by diced pumpkin and carrot. Some of the vegetables had already been cooked and blended to thicken the bouyon up too. And finally Madeleine rolled some dumplings to add into the pot a few minutes before it was ready to serve. 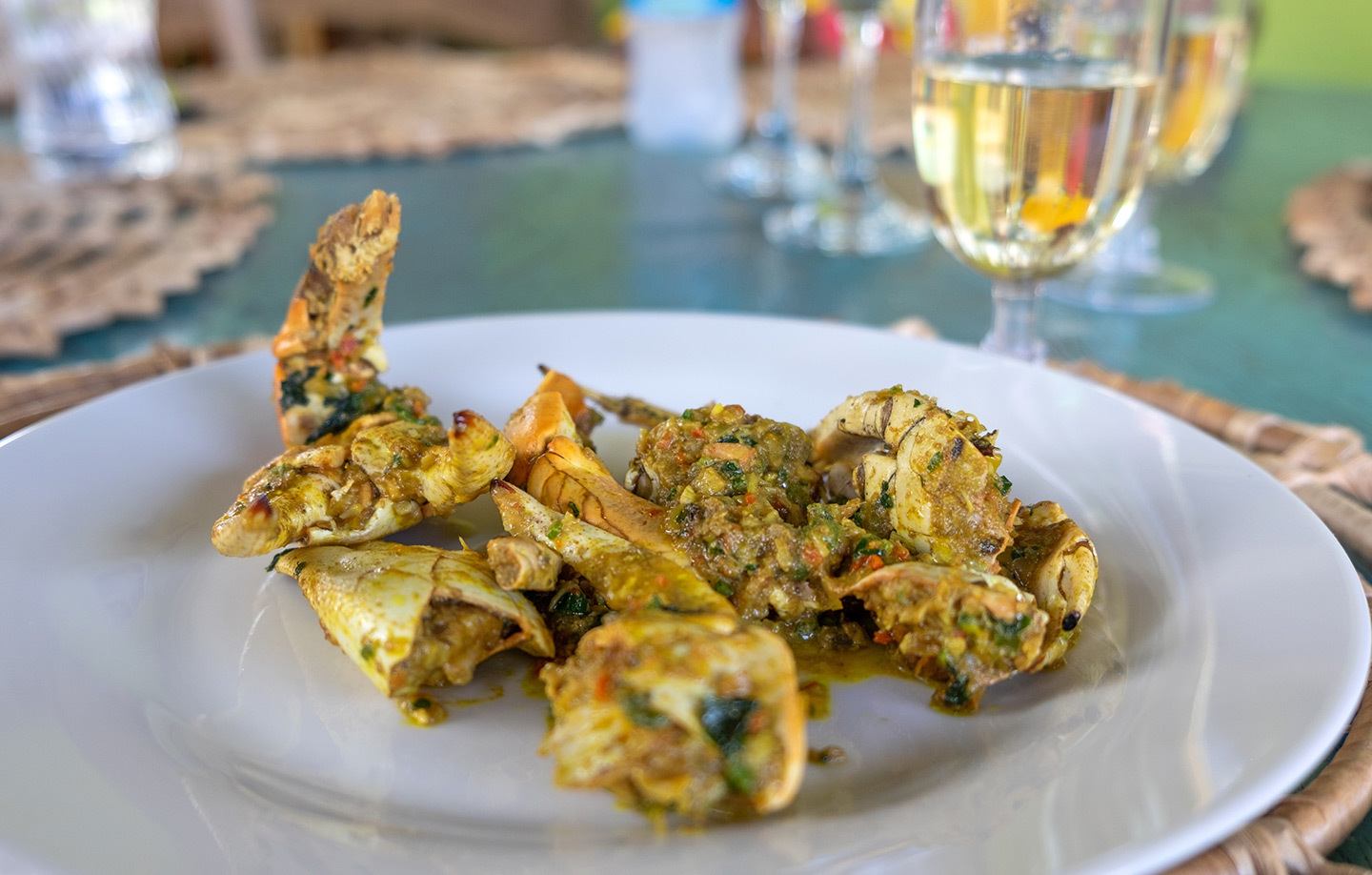 In the next pot, oil and turmeric were heated up before adding the crab claws (or ‘crab hands’ as Madeleine’s son christened them – can you tell he isn’t a seafood fan!). Next came chopped onion, garlic, herbs, chili and fresh coconut milk, blended up straight out of the coconut. We all ate together outside, scooping up spoonfuls of bouyon and pulling open crab claws to suck the meat out – one of the messiest, tastiest and most fun meals I’ve had. Simple, fresh ingredients but tons of flavour. All toasted with a boozy concoction of 80% proof rum, lime juice and honey – the Saint Lucian cure for colds (or pretty much anything). 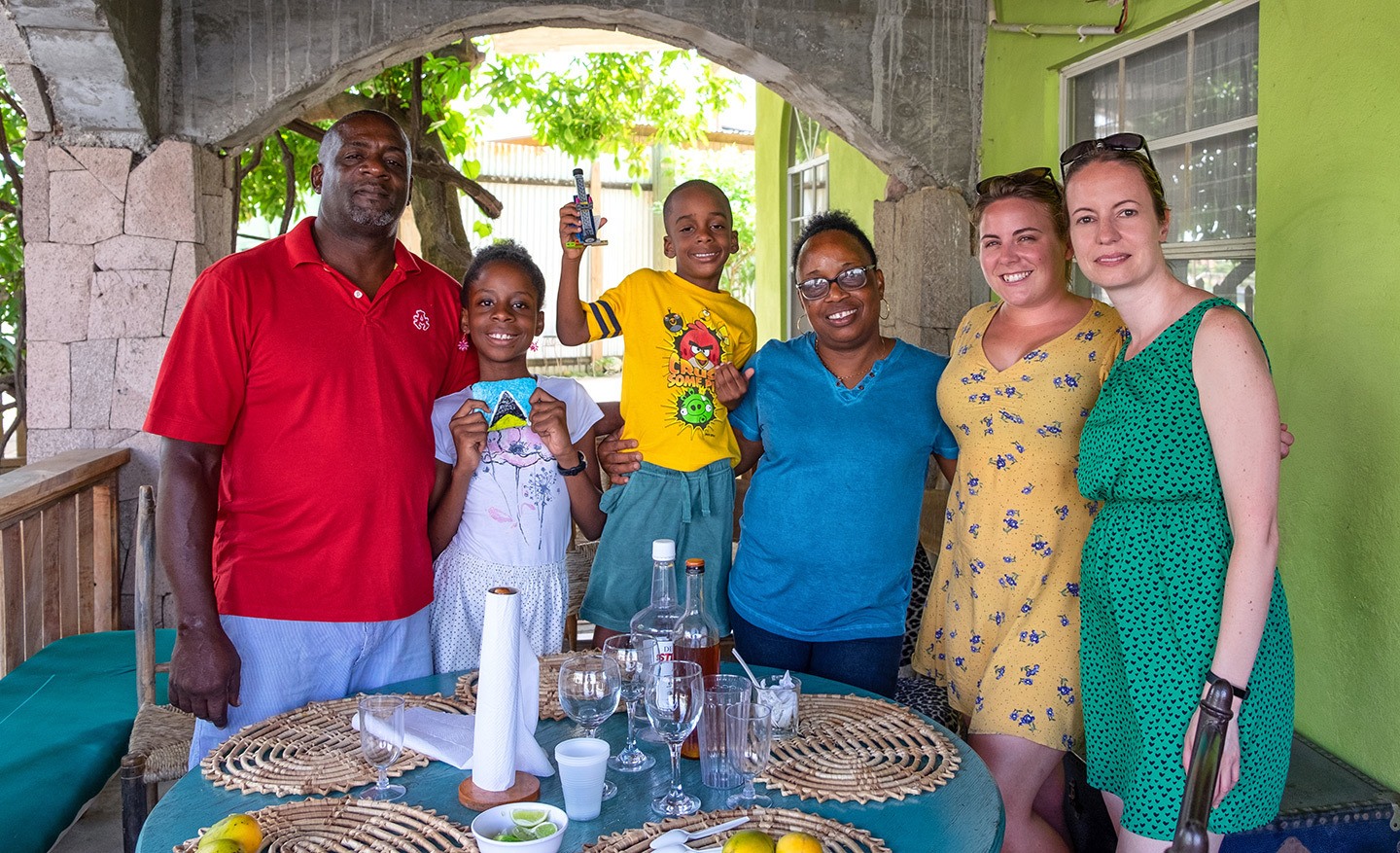 Eating with the family

After seeing local produce in the market and trying traditional Creole cooking, our final Saint Lucian food experience took a bit of both and added something a bit extra. The Caribbean isn’t really known for haute cuisine, but Cap Maison chef Craig Jones is trying to change that. He trained in Michelin-starred kitchens in the UK before moving to the Caribbean. So now he’s creating high-end dishes which mix up Saint Lucian ingredients with contemporary techniques and some seriously beautiful presentation skills. 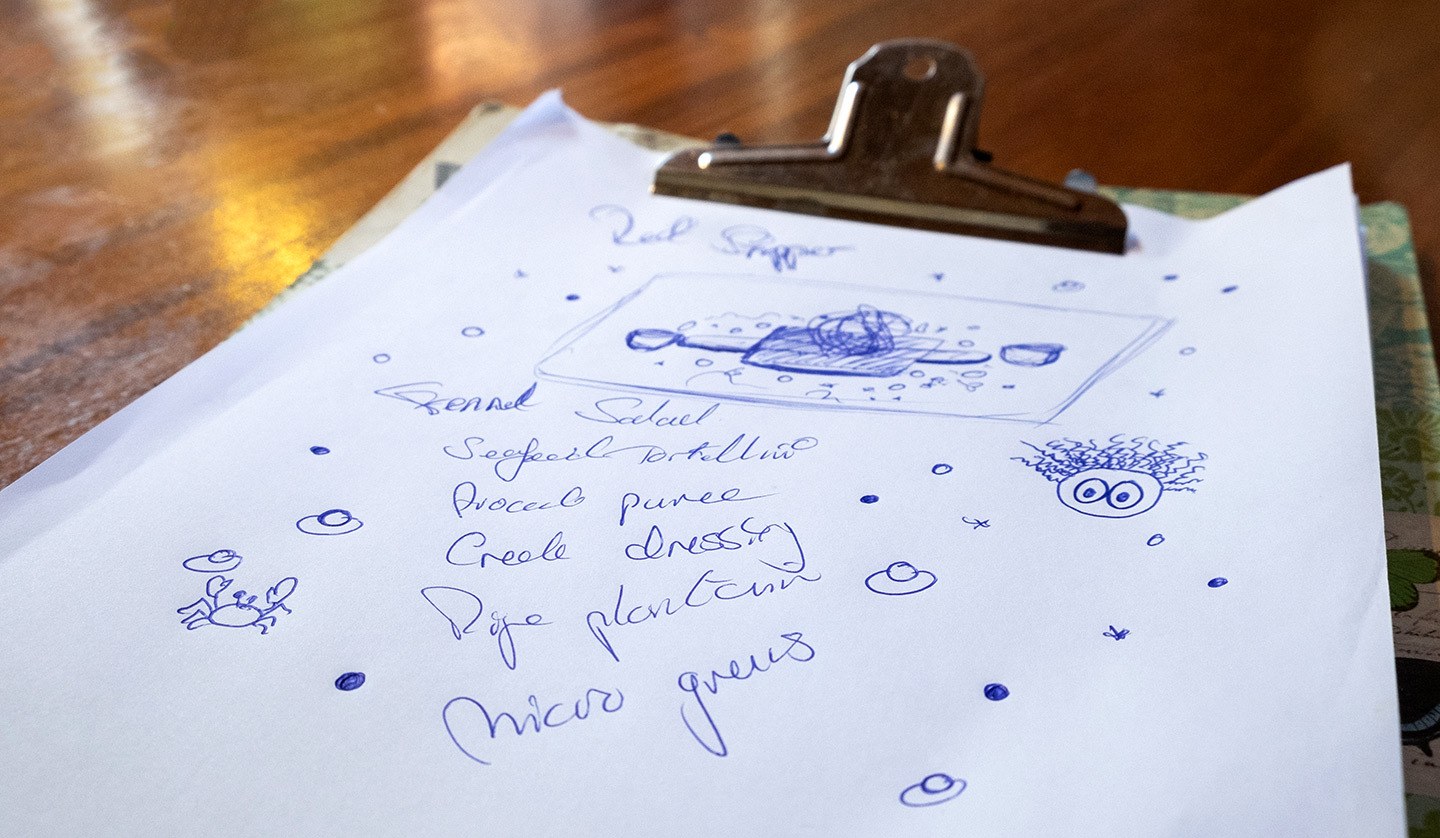 Craig and fellow chef Edna showed us how it’s done in the kitchens of Saman House, the original owners’ residence at Cap Maison. On the menu was freshly caught red snapper, seafood tortellini, fried plantain, fennel salad and Creole dressing. It’s the type of food you’d find on the menu at The Cliff at Cap, the hotel’s restaurant. It sounds almost simple, but so much work and attention to detail goes into every single part of the dish. Even the presentation is meticulously planned out on paper well before any cooking starts. 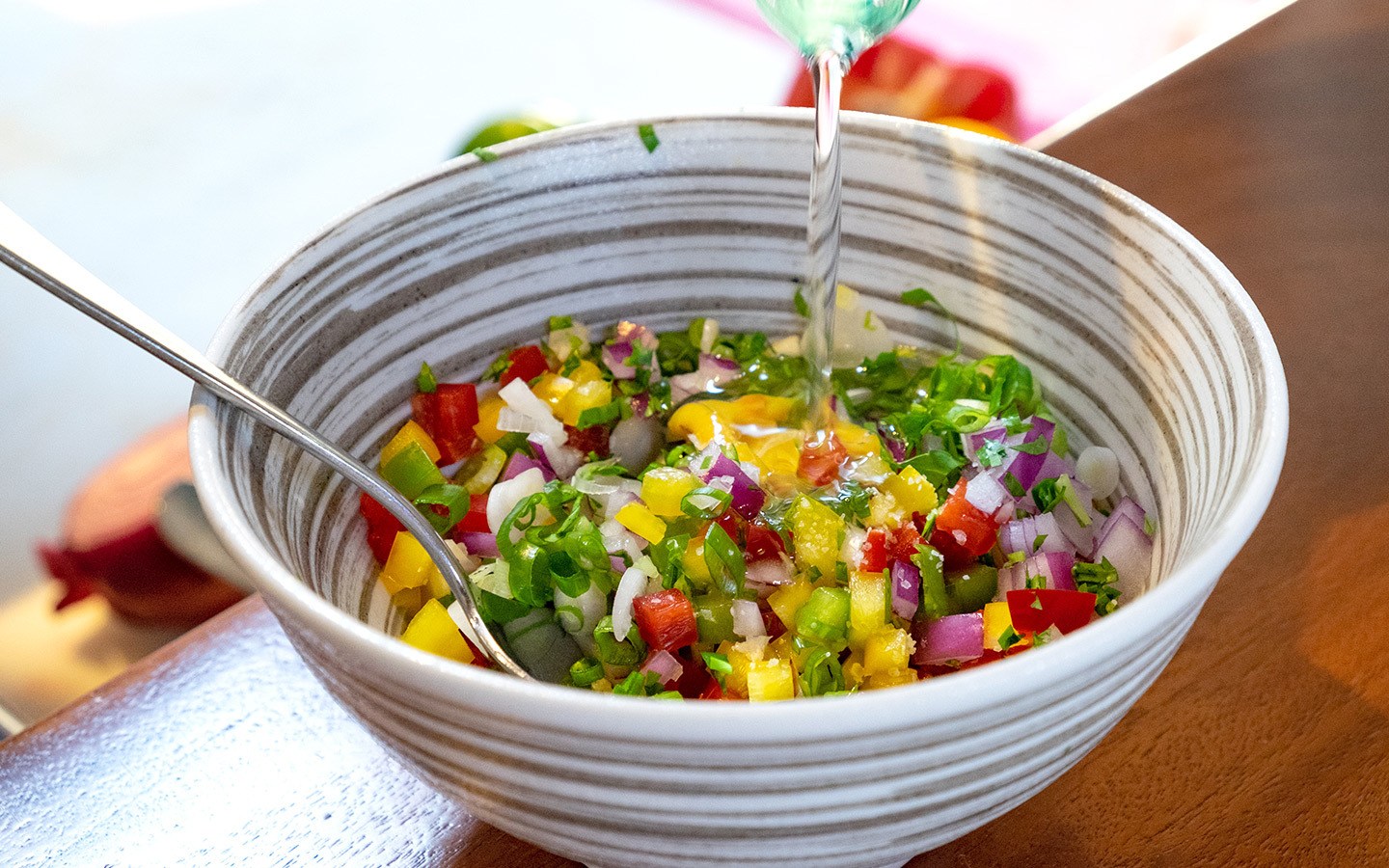 First you make the pasta for the tortellini – Edna trained in Italy so has it down to a fine art, rolling out perfectly thin sheets in the pasta maker, ready to be stuffed with seafood and pinched into a belly button shape. Next came the Creole dressing, made with finely chopped peppers, onion, chili and culantro, (a local herb that tastes a lot like coriander) and dressed with vinegar and coconut oil. Then the plantain was fried, the snapper filleted and cooked, and the tortellini dropped into boiling water for a few minutes. 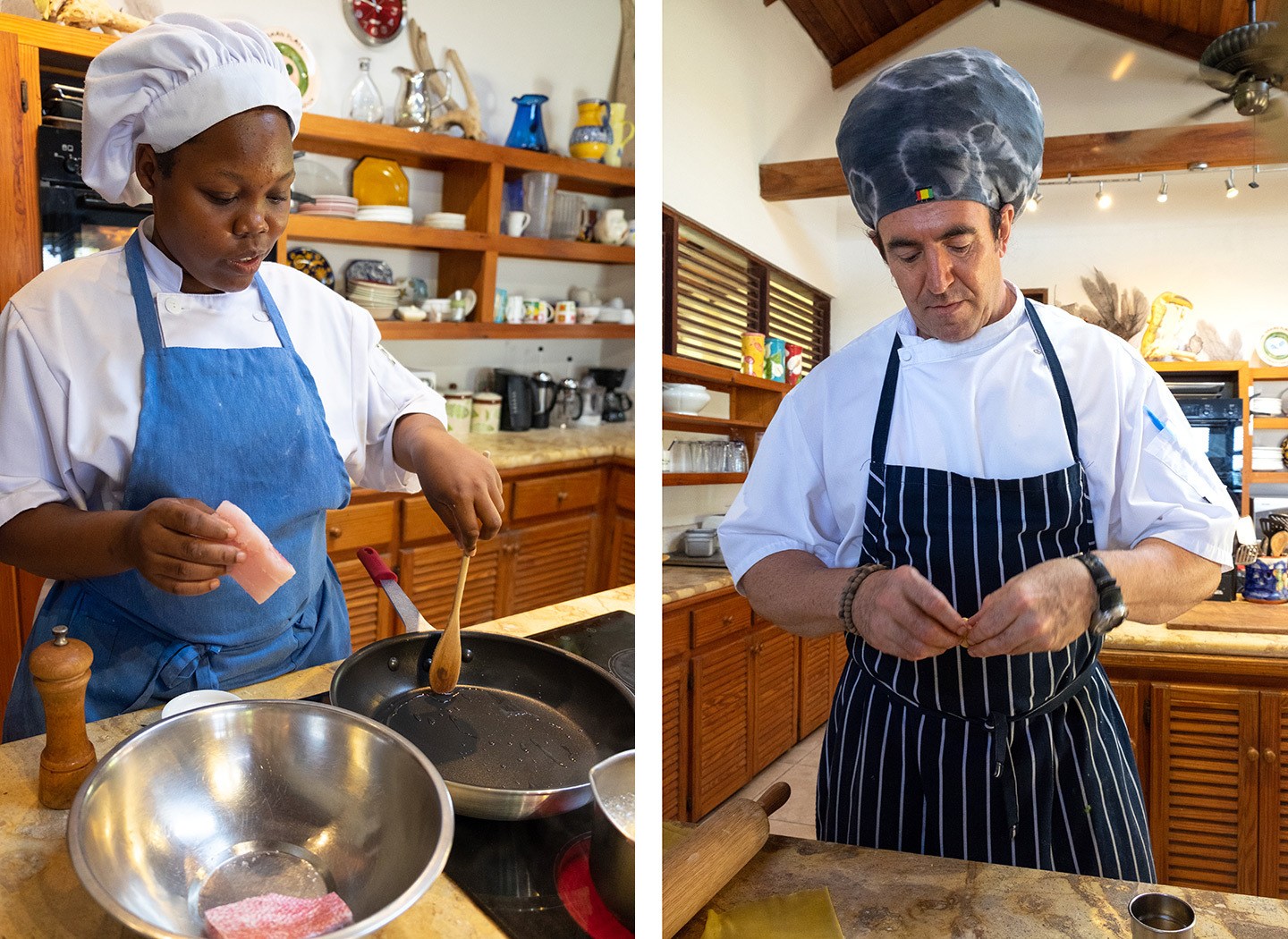 Edna and Craig in action

Finally Craig was ready to plate up the dish, starting with the plantain, followed by the snapper and finely grated fennel. Tiny dots of avocado mousse were piped around the plate, the dressing spooned over the tortellini, and micro greens arranged on top. You need a steady hand and a real eye for detail. The end result was almost too pretty to eat – but we managed, and it was every bit as tasty as it was beautiful. Cookery at this level is a real art form and it’s fascinating to see how you can take the traditional and add something new to elevate it to another level. Yet another ingredient to add into the mix of Saint Lucian cuisine. 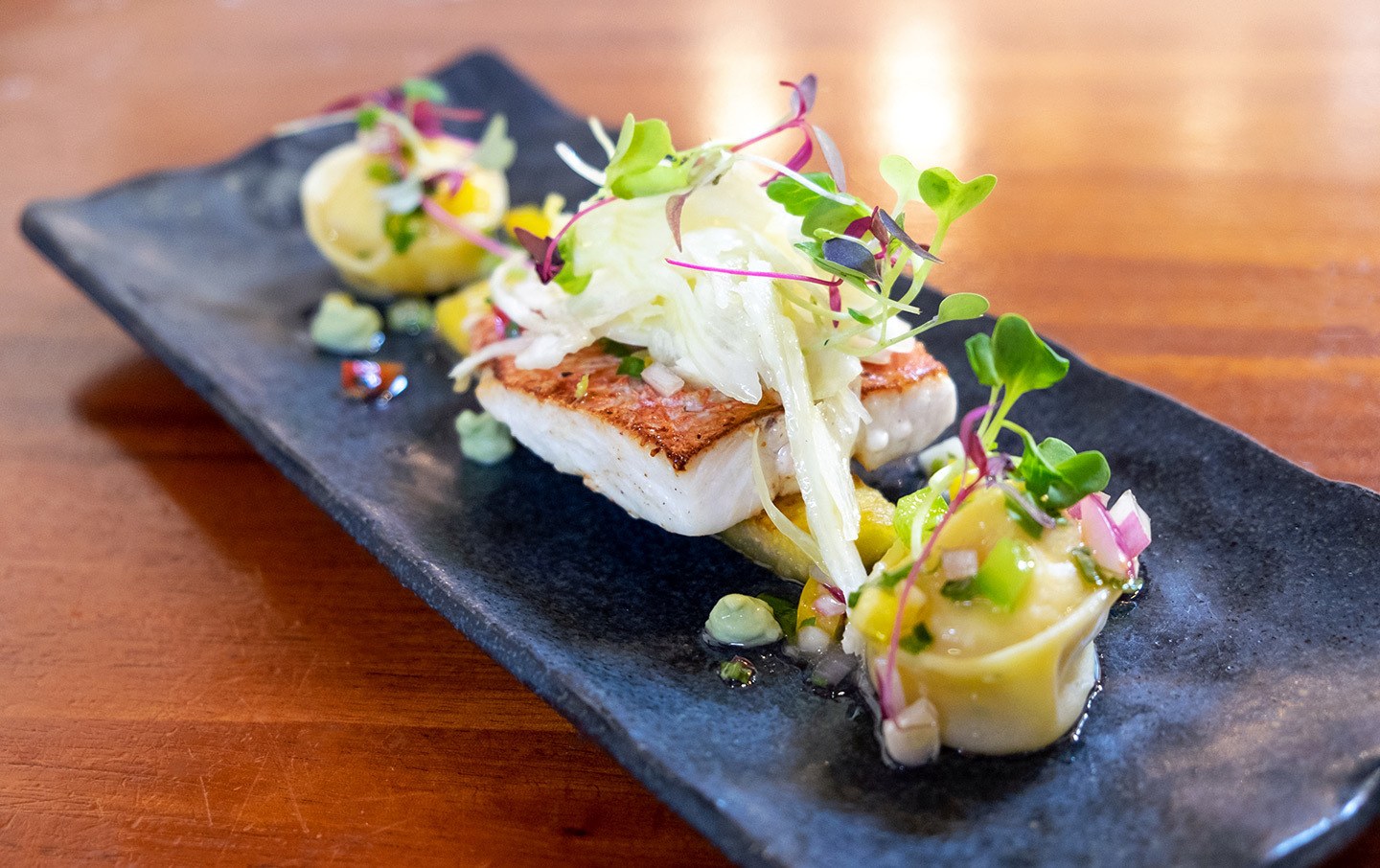 Our food experiences were organised by Cap Maison. A private tour of Castries market and cookery session with Cap Maison chef Craig Jones costs $210/£160 for two people. A Creole cookery class with Auntie Madeleine costs $80/£60 per person, including round trip transfers, two-course menu and drinks. 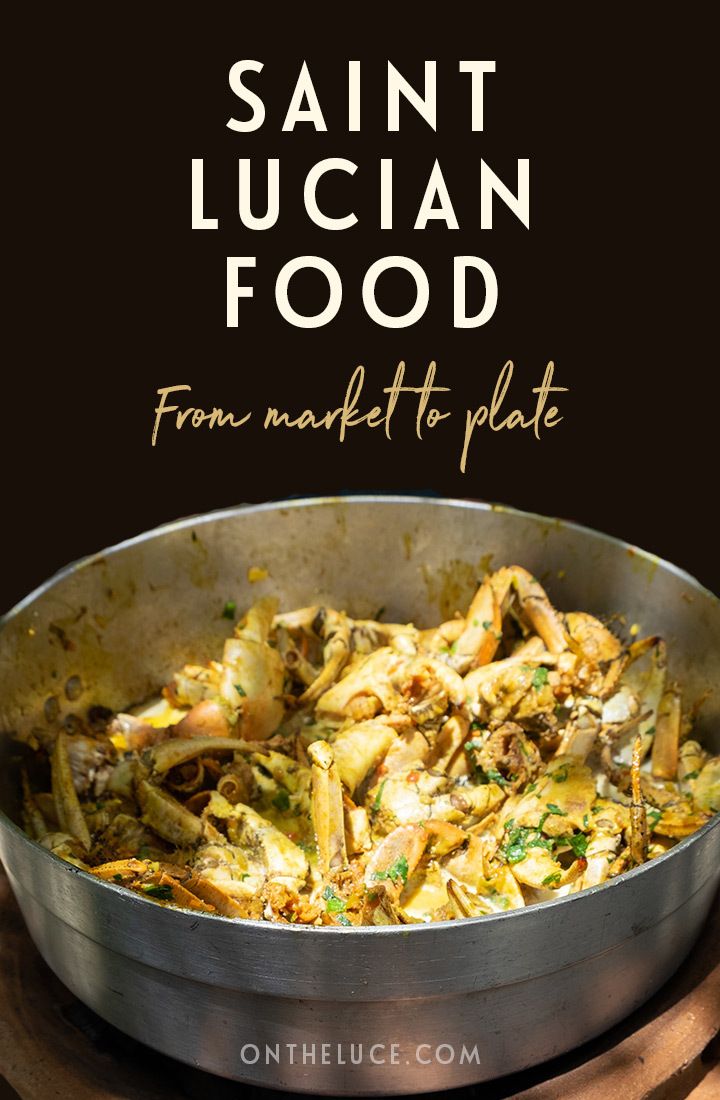 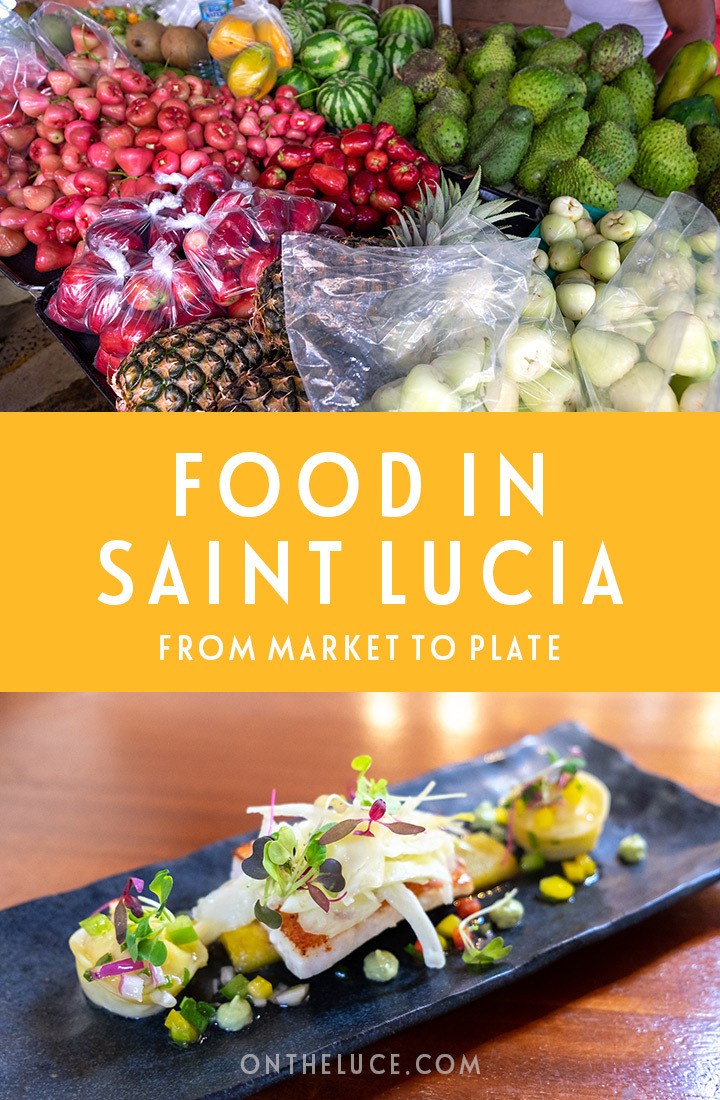 Big thanks to Cap Maison for hosting me in Saint Lucia. All views and opinions are, as always, my own.

I fell in love with St Lucia and it’s good when I visited in January in a cruise. We took a trip to Hotel Chocolat to try our hand at making chocolate and in the evening we ate at a local restaurant. I’d love to return to explore and eat more!

Such a fantastic island – I'd love to go back too!

Hi Chris, you can probably find most of these in tourist areas but they're not really traditional foods on the island.

Even tough I'm reading this at breakfast time, my mouth is watering. What a beautiful menu to feed all the senses. and those little pasta bundles of goodness. I'd be happy eating the rainbow like this everyday of the week. A Saint Lucia market -to-table day is right up my alley!

So much delicious fresh produce – I wish I had a market like that at home!

Caribbean food has never really been on my radar, but reading this has made me appreciate the traditions and diversity it offers. That bouyon is my kind of dish...as a single person I'm a sucker for easy one-pot recipes,especially when it's homely comfort food like this!

I didn't know a lot about Caribbean food before this trip but I'm a convert! Will definitely give bouyon a go when it gets a bit more wintery again.