How to spend a weekend in Hastings, East Sussex: Discover the best things to see, do, eat and drink in Hastings in a two-day itinerary featuring art galleries, indie shops, castles, smugglers and seafood.

The East Sussex town of Hastings lies on England’s south coast, with Brighton to its west and the white cliffs of Dover to its east. It’s split in two, with the new town’s high street shops, pier, seafront mini golf and ice creams. And the historic old town’s traditional fishing boats, smugglers’ tunnels, Tudor buildings, galleries and antique shops.

After its heyday as a Victorian seaside resort Hastings fell into decline, but like so many British coastal towns it’s reinventing itself. It still has the old seaside holiday attractions, but there’s also a new and unexpected arty side. So here’s my 2-day itinerary to help you plan the perfect weekend in Hasting, with what to see, where to eat, drink and stay.

How to spend a weekend in Hastings

Check into your accommodation then start your weekend in Hastings in the old town, a charming mix of wooden-fronted houses and half-timbered pubs linked by narrow passageways called ‘twittens’. Call in to the First In Last Out (FILO) for a drink. This cosy pub has an open fire in winter and produces six real ales in its own microbrewery.

Then head to the Boulevard Bookshop and Thai Café for dinner. This quirky spot is the country’s only bookshop-come-Thai restaurant, with just a few tables surrounded by stacks of books. Their Thai food is fresh and tasty, and you can bring your own alcohol.

Start the day at the Stade on the seafront in the old town. The name comes from the Saxon word for landing place and boats have been landing on this shingle beach for over a thousand years. Hastings has the largest fleet of beach-launched fishing boats in the world, which are hauled out of the water and dragged up the beach as there’s no harbour.

Because of that the boats can’t be too big – 10 metres long at most – or too heavy or they’d never be able to move them up the beach. And having smaller boats mean they work in a more sustainable way as they can only carry limited quantities of fish.

Next to the boats you’ll see a series of tall, black wooden buildings. These are the net huts, built for fishermen to store their nets. Nets would rot if they were left outside and there wasn’t a lot of space build on the beach, so the fishermen built upwards instead of outwards and hung the nets inside. They’re so unusual they’ve been given Grade II listed status.

Find out more about Hastings fishing traditions at the Hastings Fishermen’s Museum. It’s inside the old Fisherman’s Church and exhibits include the Enterprise, the last sailing lugger built in Hastings in 1912, model boats and photos. Also nearby is the Shipwreck Museum, with artefacts from 17th- and 18th-century ships which sank in the Channel.

If you get hungry, you can pick up freshly caught fish and pots of cockles, winkles and shrimp from stalls in the net huts or fishermen’s huts on the beach. Just keep an eye out for the greedy seagulls. Or try Judges Bakery for freshly baked bread, cakes and snacks, including their Mack-a-Rolls – puff pastry filled with smoked mackerel.

Next take the East Hill Lift to Hastings Country Park. The lift is Britain’s steepest funicular railway. It was built in 1903 and still carries passengers 80 metres to the top. The Country Park stretches for three miles along the clifftop, with grassy areas and woodland to explore and stunning views of the old town and along the coast to St Leonards.

There’s also another funicular on the other side of the old town – the West Hill Lift. This one runs through a tunnel up to the remains of Hastings Castle. The castle was built by William the Conqueror around the time of the Battle of Hastings. It was originally wood but was rebuilt in stone, with a prime lookout position over the English Channel.

Although it survived decades of attacks from invaders, it couldn’t beat the sea. The cliffs were battered by storms and the soft sandstone rock crumbled away, taking chunks of the castle with it. Henry VIII did more damage during the Dissolution of the Monasteries and WWII bombers did their bit too. So all that’s left now is a few walls, arches and dungeons.

The West Hill is also the site of a network of smugglers’ caves and tunnels, which now house the Smugglers Adventure tourist attraction. It’s an interactive, family-friendly exhibition where ‘Hairy Jack’ tells the story of the pirates, smugglers and bootleggers who used Hastings’ cliffs to stash their contraband over 200 years ago.

Then end the day with dinner at The Crown, a friendly freehouse with a changing selection of local artworks and sculptures on display. They serve modern British cuisine, with dishes using locally sourced produce like Romney Marsh lamb and Twineham Grange cheese There are also local real ales, English wines and a wide selection of gins.

Hastings has become a hotspot for artists, helped by the opening of the Hastings Contemporary (formerly Jerwood Gallery) in 2012. Start the day with a look around the gallery, located in an unusual black-tiled building among the net huts on the Stade – it was controversial with locals when it was built, but has won several architecture awards.

As you’d guess from the name, Hastings Contemporary specialises in modern and contemporary British and international art. As well as the permanent collection there’s also a mix of changing temporary exhibitions of painting, print, photography and sculpture.

Afterwards wander through the old town and browse some of the independent shops on George Street and the High Street, with antique stores, local art and craft galleries, bookshops, cafés and delis. Some of our favourites are the old-fashioned AG Hendy and Butler’s Emporium for vintage homewares, or reste and Shop House Hastings for gifts.

Then call into Maggie’s Café for lunch. It’s said to do the best fish and chips in Hastings, with big portions of sustainably sourced crispy cod, haddock and scampi (or halloumi for vegetarians). It gets very popular though so it’s a good idea to book in advance.

After lunch, take a stroll along the seafront. Stop off at Di Pola’s Gelato to pick up an ice cream on the way. Their creamy gelato is a step up from the usual seaside Mr Whippy, with a big range of flavours (mint choc chip and sea salt caramel are our picks).

Carry on walking along the beachfront to Hastings Pier. It was built in the 1870s for Victorian holidaymakers and had an Art Deco theatre and music venue where bands like Pink Floyd and the Rolling Stones played. But it was damaged by storms in the 1990s and declared unsafe, and a huge fire in 2010 almost destroyed what was left.

The pier was saved thanks to the Heritage Lottery Fund and 3000 local Hastings residents who each bought a share. It’s was completely restored and redeveloped, and reopened in 2016 with a new visitors’ centre, restaurant, food stalls and a big open space for concerts and film screenings – winning the renowned Stirling Prize for architecture in 2017.

So if the sun is shining, finish your weekend in Hastings with a drink in the giant beer garden at the end of the pier. It’s the perfect spot to soak up the sea views and there are live music performances from bands and DJs during the summer months.

Map of things to do in Hastings, East Sussex

How to get to Hastings

Hastings is around 1.5 hours by direct train* from London Bridge station. You can also take the train along the coast from Brighton (1 hour 10 minutes).

The nearest airport is London Gatwick, which is around 60 miles or 1.5 hours’ drive from Hastings. You can also reach Hastings from Gatwick by direct train in 1.5 hours.

Hastings old town is around a mile/20 minutes’ walk from the train station. The old town is compact and easy to get around on foot. A return trip on the East Hill and West Hill lifts costs £4.20 for adults and £2.60 for children and concessions.

Where to stay in Hastings

The Old Rectory* is a luxurious B&B with nine stylish bedrooms named after streets in the old town. Each is individually decorated, with unusual additions like a freestanding claw-foot bath and a toilet hidden in a bookcase. A homemade breakfast is included and there’s a cosy lounge with honesty bar and log fire, and a pretty walled garden.

Take a trip back in time at the St Benedict Victorian Bed and Breakfast*, a Victorian-themed B&B in a four-storey villa in neighbouring St Leonard’s which dates from 1882. There are five bedrooms – four doubles and one twin – each with authentic 19th-century furnishings and décor, as well as a drawing room, gardens and its own chapel.

Or if you prefer self catering, Swallows Nest Covehurst Bay Cottage* is just out of town in the peaceful Hastings Country Park. It sleeps four in two en-suite bedrooms with an open-plan lounge and kitchen, and private patio with BBQ. It’s surrounded by gardens and has a swimming pool, steam room and hot tub shared with another property.

Looking for somewhere to stay in Hastings?* 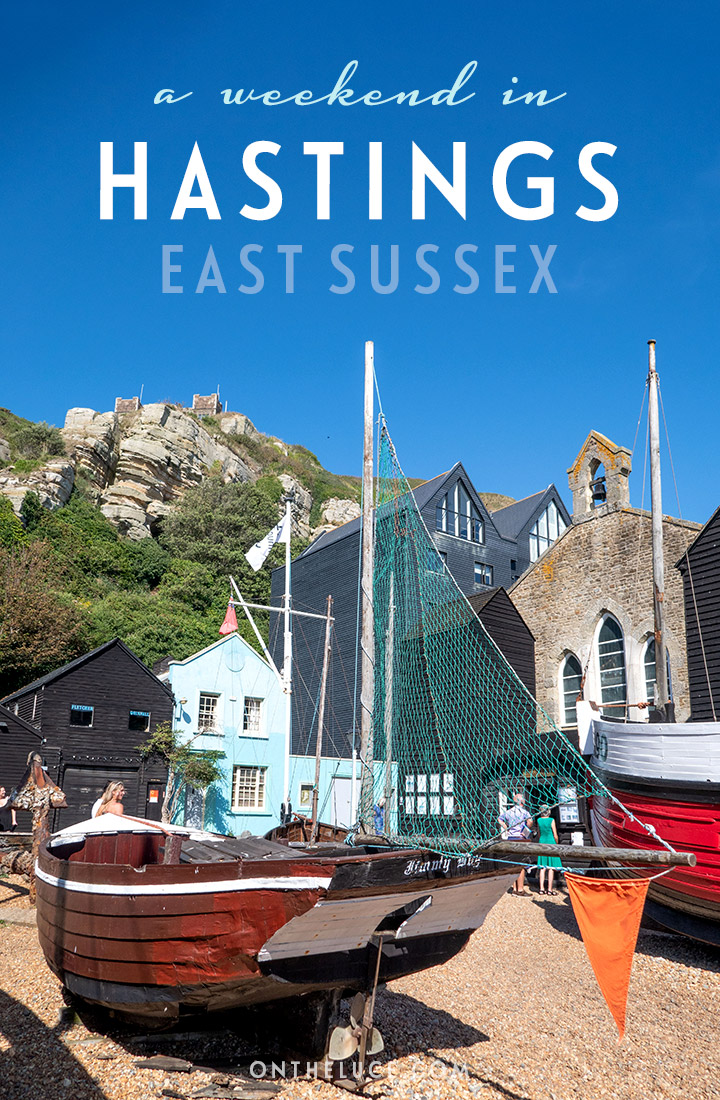 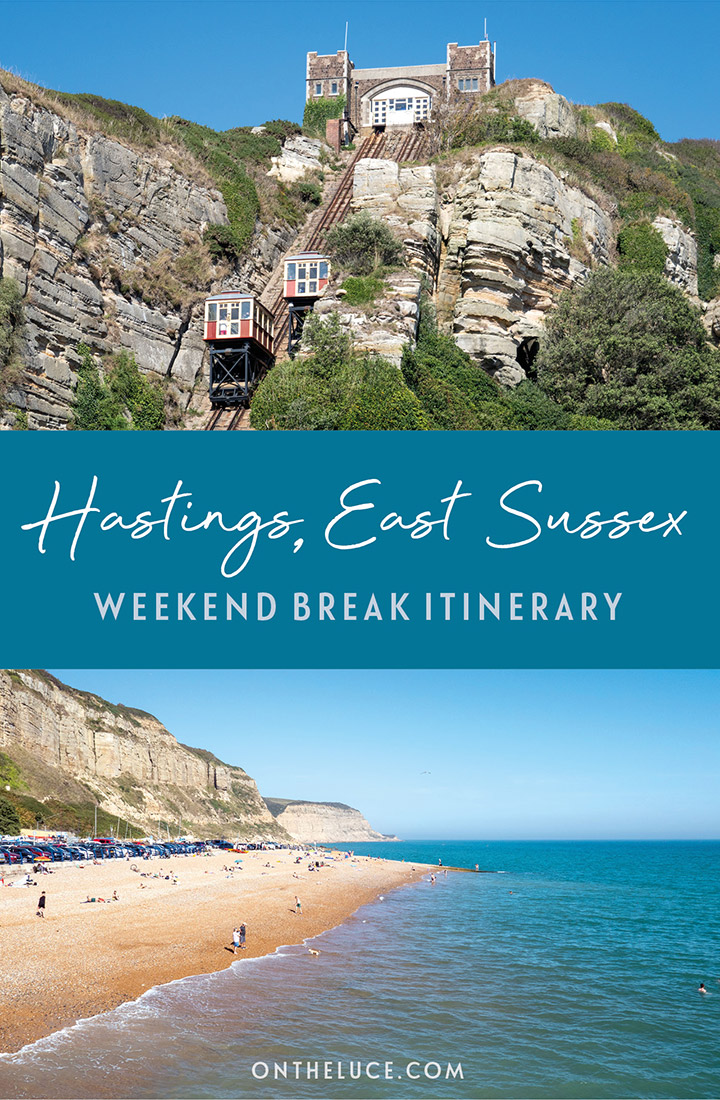 Nice article Lucy. Hastings really is steeped in history and the Old Town is perfect for early evening strolls in the summer. The beach based fishing fleet has been launching fishing boats from the Stade beach for over 500 years!

Thanks Joan, yes it's a lovely place, I really enjoyed exploring and hope to be back to see more someday.

I love this post Lucy! Since we moved to London my boyfriend and I have been exploring England's coastline. If there is one thing I really don't like about British Seaside villages, it's all the casinos and fairs. I prefer traditional seaside villages and Hastings sounds exactly like my cup of tea. Must visit soon, maybe this weekend.

Thanks Katharina. If you like traditional seaside spots you will love the Old Town in Hastings – there's a few casinos in the new bit but the old part is much prettier!

Hastings old town is one of my favourite Sussex towns - so quirky and interesting and I loved reading your perspective. Glad you enjoyed your visit.

Thanks Suzanne, it was so nice to get to see your part of the world!