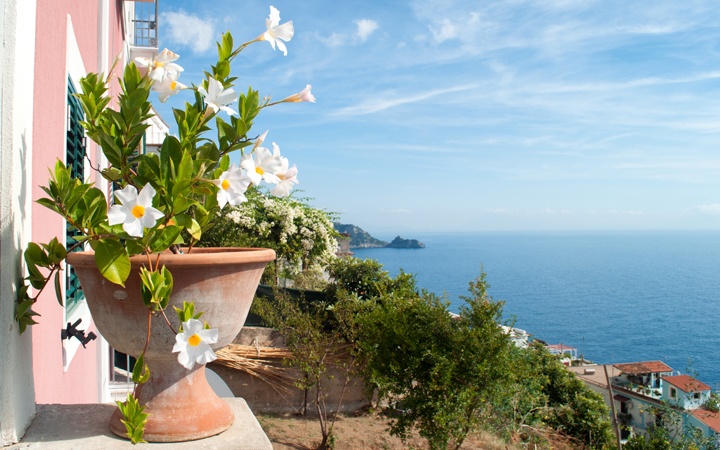 In a country packed with beautiful landscapes, it says something that the Amalfi Coast is ranked as one of Italy’s most scenic stretches of coastline. This string of pastel-coloured villages are cut into a steep hillside, with jagged mountains behind them and the deep blue Mediterranean Sea in front. Their famous names – Amalfi, Positano, Ravello – are synonymous with glamour and have long been the haunt of film stars and fashion designers. Throw in ornate churches, lemon groves, pine forests and crumbling palazzos and you have Italian coastal perfection. Which means driving the winding coast road is dangerous in more ways than one – if the drivers don’t get you the distraction of one stunning view after another might do.

But it’s not all paradise on the Amalfi Coast, its popularity means that in summer you run the gauntlet of traffic jams, crowds and high prices. For a more peaceful take on this beautiful part of the world, we waited until early October to visit and based ourselves in Praiano, one of the Amalfi Coast’s quieter villages. 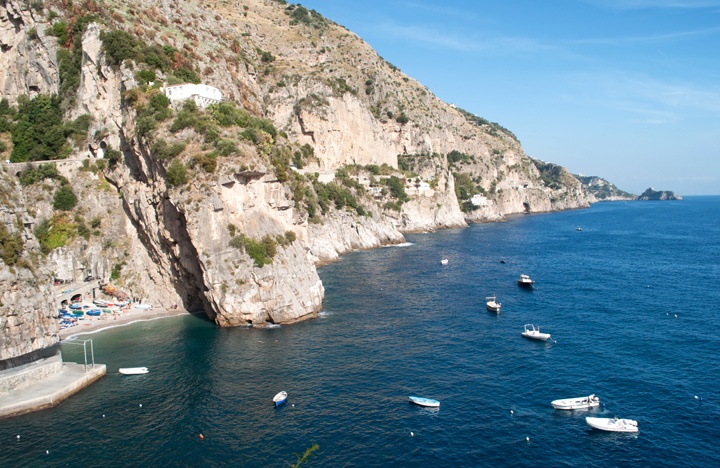 The steep coastline around Praiano

Set in between Amalfi and Positano, Praiano is 20 minutes’ drive from each, but feels a lot further away. That’s not to say there aren’t any tourists – you’d be hard pushed to find any stretch of the Amalfi Coast that doesn’t pull in the visitors – but it has a more laid-back feel. Our apartment was on the edge of the village, in a quiet residential area with knockout sea views that more than made up for the climb to get there.

Steps are one thing you can’t avoid on the Amalfi Coast. Buildings are perched precariously on the cliffside and the roads have to wind back and forth to climb up and down. Its much quicker to get around on foot using the staircases tucked away between the buildings. With so little land to build on everything is tightly packed in and privacy’s a luxury, so you get glimpses into people’s flower-filled gardens and terraces. But all the climbing does have the bonus of helping to burn off some of the area’s fabulous food and wine. 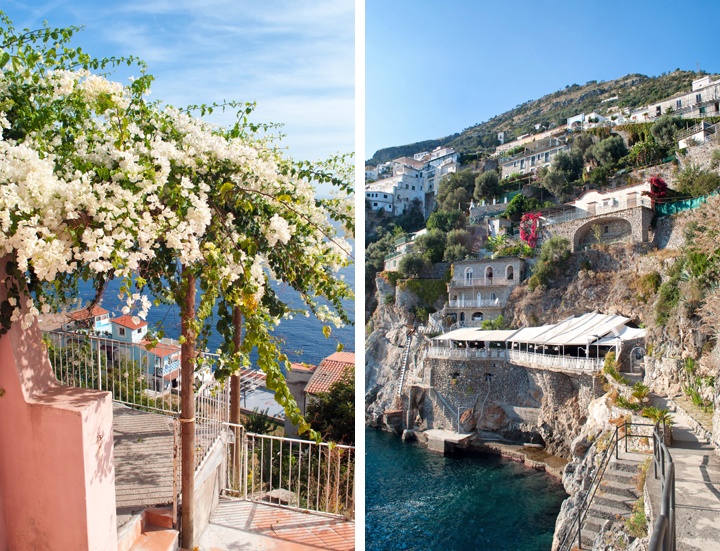 Flower-filled gardens and buildings cut into the cliffs

High up away from the madness of the coast road, where you dodge motorcycles and overtaking traffic on blind bends, the Amalfi Coast’s walking paths are one of the best ways to travel between the different villages. The most famous of the area’s walking routes is Il Sentiero degli Dei – the Path of the Gods. It was originally built by the Romans in the fourth century for transporting goods and runs from Bomerano to Nocelle, in the hills above Positano.

You can also join the route at Praiano by climbing up to the Convent of St Domenico – but it does involve 1900 steps and some vertigo-inducing drops to get up there! The view at the top is worth the effort though, looking across the bay and over to the island of Capri. There are also plenty of other walking routes along the coastline, both along the water and through the hills. 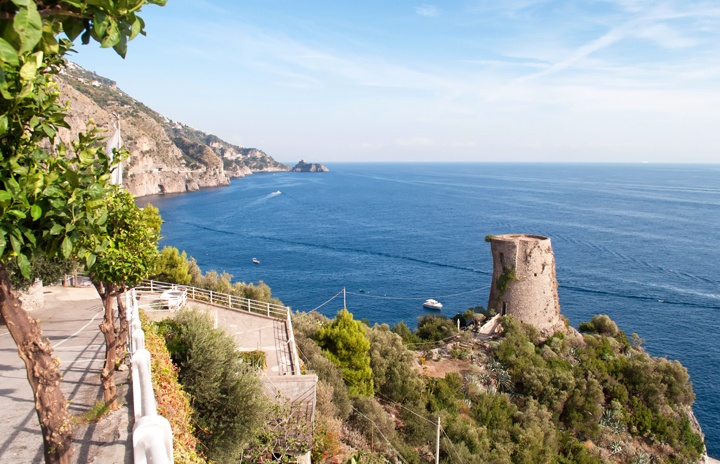 A Saracen tower guarding the coast

Back down at ground level, it was time to head to the beach. The coast is so steep here that you don’t get long sandy beaches, but there are plenty of small pebbly coves between the cliffs. The town beaches in Amalfi or Positano can be packed, so the best way to find a quiet spot is by hiring a boat and cove-hopping along the coast. Central Praiano doesn’t have a beach a such – a big flood in the 1920s destroyed its sea access, so the village had to move further up into the hills.

The nearest you get to a beach in central Praiano is the staircases built into the rocks so you can climb down onto a platform and swim from there. Not quite what we had in mind, so we followed the path on along the rocks, around a headland topped with a ruined tower. It was built in the Middle Ages to defend the area from Saracen invaders. There were originally a whole string of them along the coast and if the guards spotted invading ships they would light a fire to warn their neighbours. 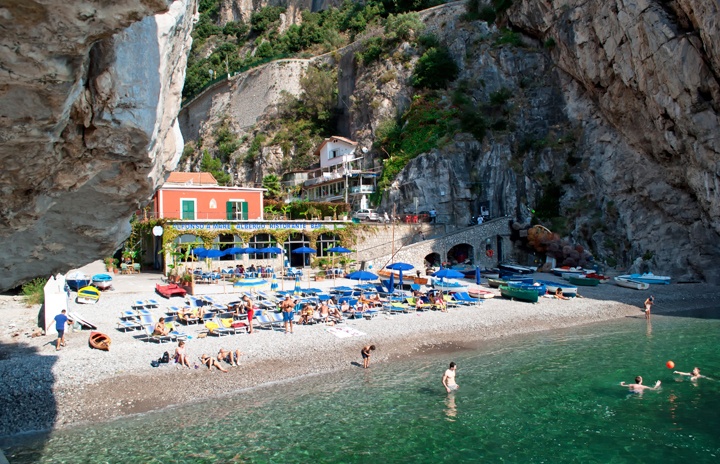 Further on around the next headland we finally we found our beach, wedged between two towering cliffs – the pretty cove at Marina di Praia. We claimed a sunlounger before cooling off in the sea – the greeny-blue water was incredibly clear and still warm enough to swim in. There are a few restaurants around the beach and perched on the rocks around the headland. There’s even a nightclub called Africana which is built in sea caves with a glass floor just above the water, though it had already closed for the season by October.

As the afternoon wore on, the sun started to disappear around the headland. On the beach the sunbathers kept shuffling further to the right to catch the last few rays until they were practically climbing the cliffs. Once the sun vanished it was time to brace ourselves for the climb back up the hill for drinks on our balcony with the backdrop of a glowing sunset sky. It’s not quite the glamorous lifestyle you might expect from the Amalfi Coast, but this area’s peaceful side has plenty of charms of its own. 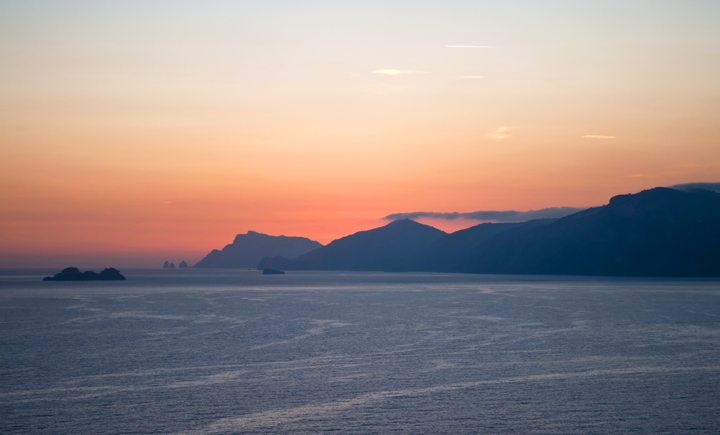 The sun setting over the Amalfi Coast 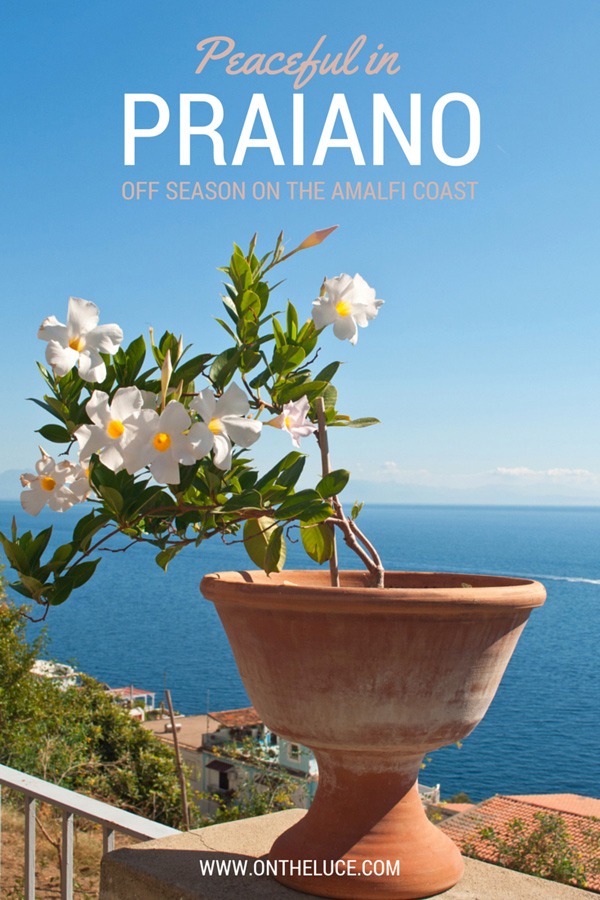 I hadn't seen this article, but we did the exact same thing this year: ten days in Praiano first half of October. We visited the surrounding towns as well as Pompeii and Capri on day trips. No way would I want to stay in crowded Positano or Amalfi. Praiano has plenty of restuarants and scenery, and is fun to explore on foot or by golfcart taxi. Praiano was perfect for us.

Yes it's such a good option for seeing the Amalfi Coast without all the crowds, I really enjoyed staying there!

What a wonderful read! We leave for our honeymoon on the amalfi coast in a weeks time! A few nights in naples, 9 nights in praiano and 2 nights in Rome. Glamour on the amalfi coast is not even close to what I had in mind, this article has me really excited for our time there! We have a long time booked, but we really do want to spend most it relaxing in our favourite spots with a few days venturing out in either direction to positano, amalfi and capri <3 There aren't many articles out there specifically on Praiano so it was so wonderful to hear your experience! If you have any recommendations for places to eat, drink and visit I'd love to add them to our list!

Have a wonderful time! It's such a lovely part of the world – and so relaxing just soaking up those views. That little beach at Marina di Praia is definitely worth a visit – the restaurant on the beach did good fresh fish too. We didn't eat out a lot but did like Costa Diva too.

Your photos are stunning! My fiance and I are planning our honeymoon on the Almafi Coast and basing our stay in Praiano. Would you mind sharing us the link for the place you stayed in Praiano?

Thanks so much! And yes sure no problem – I actually covered it in a post I did about my favourite AirBnB rentals here: https://www.ontheluce.com/my-airbnb-tips-and-favourite-summer-stays/

These are the most beautiful fotos of Amalficoast I have ever seen! I love the bright colors!

Thanks, it's such a beautiful place!

The beach, the beautiful water, the rocky but picturesque beach. I mean, it's Italy. What not to like? Stunning!

Too right – I can never get enough of Italy!