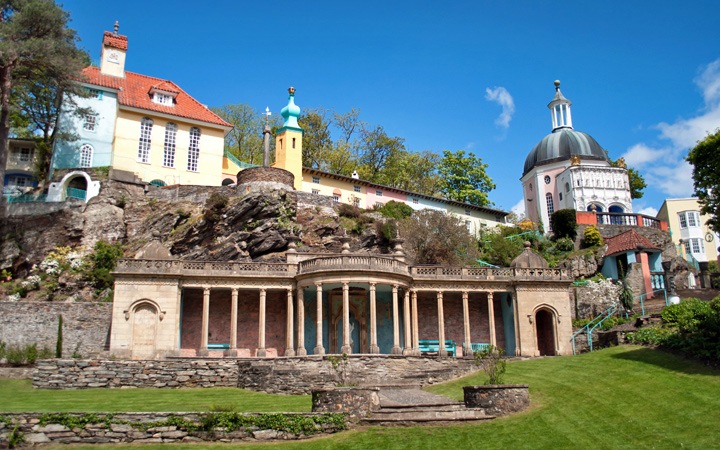 It was a picture straight out of an Italian holiday brochure. Clear blue sky, a shimmering Mediterranean sea, tropical flowers, pastel coloured buildings, tourists eating cones of gelato, and the lilting tones of… Welsh? Yes in reality this classic Italian scene was somewhere a lot closer to home. Welcome to the North Wales village of Portmeirion, where nothing is quite what it seems. The Mediterranean is really the estuary of the River Dwyryd, the gelato is made by Caffi’r Angel Ices from Carmarthenshire milk. Even the buildings deceive you, with windows painted on to create extra floors and terraced houses that are really one big mansion inside. But how did this patch of the Mediterranean end up in North Wales – and why? 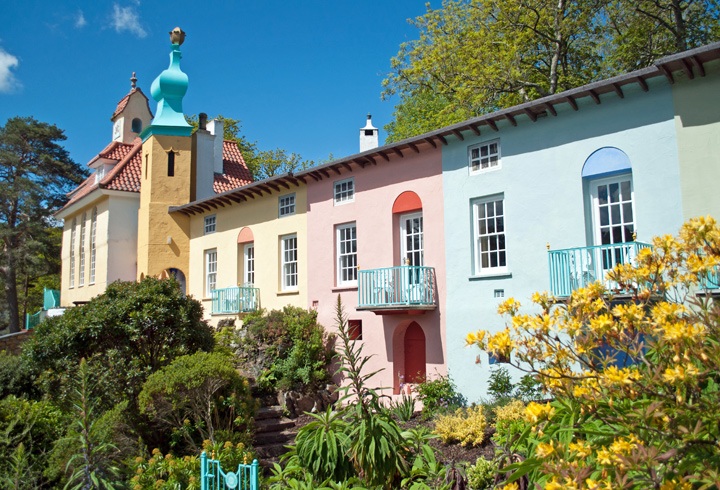 Portmeirion was the brainchild and life’s work of eccentric architect Sir Bertram Clough Williams-Ellis. The site was originally the site home to a tiny village called Aber Iâ, but by the time Williams-Ellis bought the land in 1925 it had been abandoned and all that was left were some overgrown gardens. He renamed in Portmeirion – port because of the coastal location and merion after the old county of Merioneth – and set about turning it into a colourful, weird and wonderful seaside village over the next 50 years. 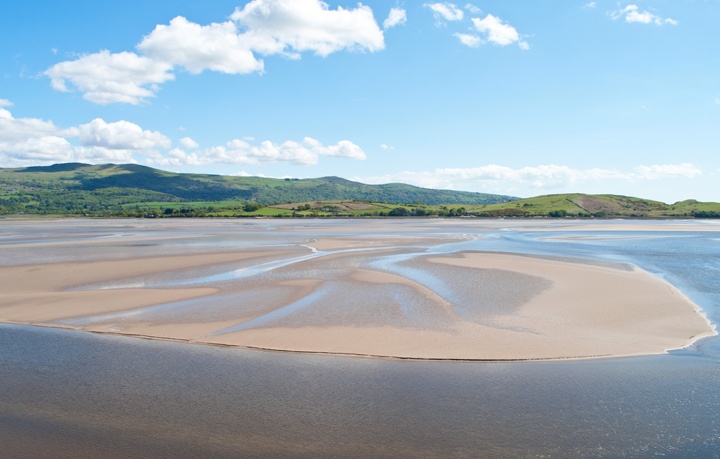 Views out over the sandy River Dwyryd estuary

Williams-Ellis was obsessed with preserving the environment, and wanted to prove that you can take a beautiful location and develop it without spoiling it. His design inspiration came from the Mediterranean, but most of the buildings were from the UK. He collected bits and pieces from historic buildings that were due to be demolished, calling Portmeirion his “home for fallen buildings”. He had an obsession for detail – like with the Colonnade,  originally the front of a bathhouse in Bristol. It was meticulously dismantled and transported to Wales, with every stone numbered so it could be put back together perfectly. 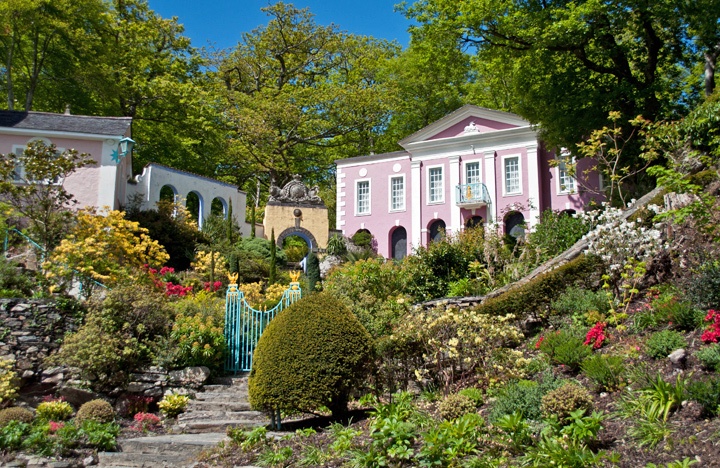 The reclaimed and restored buildings were mixed up with Williams-Ellis’ own creations to create something totally unique. Where else can you find a golden Buddha next to a classical Greek statue, or an art deco lido next to a Italian Renaissance dome. It’s all a little bit crazy, but the strange combinations somehow work and can’t help making you smile. Everywhere you look there’s a quirky detail designed to trick you. Like Unicorn Cottage, whose columns and grand entrance make a one-storey bungalow look like a miniature stately home. Or the Gloriette, a façade of arches and windows with nothing behind it. 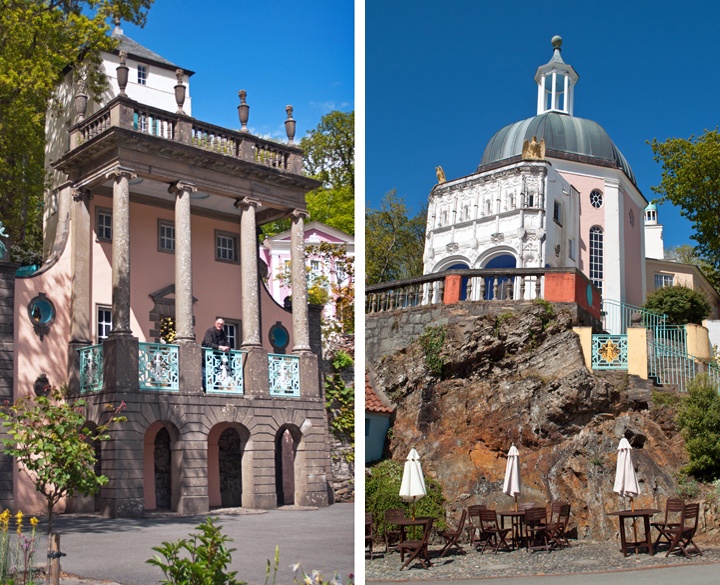 The Gloriette and a dome modelled on Florence’s Duomo

Portmeirion’s first building was a hotel on the water’s edge, where Williams-Ellis and his wife hosted the rich and famous of the 1940s and 50s, like Noel Coward and Ingrid Bergman, and where you can still stay now. As you wander around, you can see why the village’s mix of peaceful location and eccentric design has inspired so many artists, writers and musicians over the years – Jools Holland stayed in Unicorn Cottage and loved it so much that he had a replica built back home to use as his studio. Portmeirion was also used as a location for various films and TV series, but it’s 1960s show The Prisoner that made it famous. 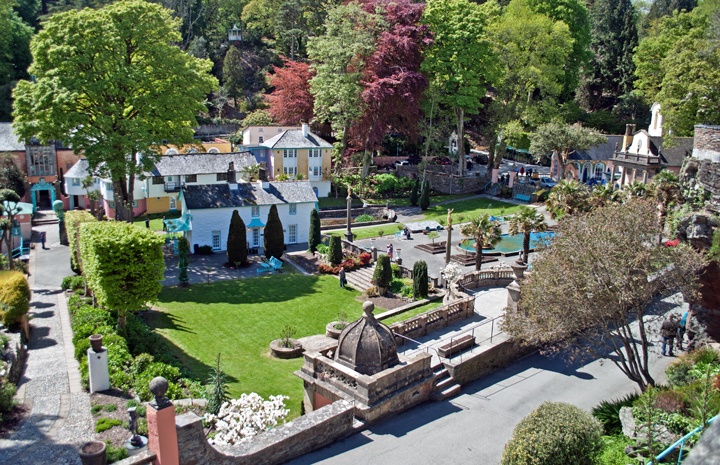 This cult show starred Patrick McGoohan and was about a former secret agent held captive in a mysterious village and known only as ‘Number 6’. The series was all a bit strange and surreal so Portmeirion made the perfect location. Though Williams-Ellis made the producers agree they wouldn’t reveal where it’d been shot until the end of the series so it didn’t get mobbed with visitors. But after than fans from around the world started coming to visit the locations and they’re still coming. The house where Number 6 lived has been turned into a Prisoner shop and there’s an annual convention here for Prisoner obsessives. 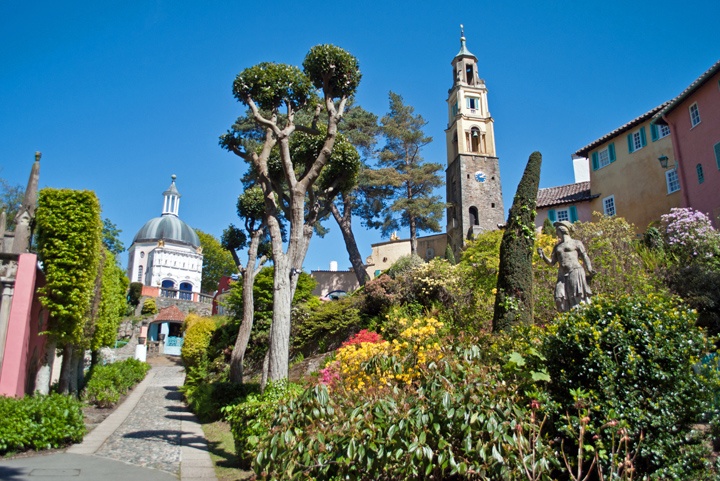 The bell tower and Greek statues

Williams-Ellis kept working on Portmeirion right up until he died in 1978 at age 94. And as you’d expect he didn’t just go for a conventional burial. Instead he wanted his ashes to be made into a rocket which 20 years later was fired off into a firework display over Portmeirion – so he’ll always be a part of the village! Portmeirion is now owned by a charitable trust who run cafes and shops on site as well as renting out rooms in the hotel and in the village houses. There are 15 self-catering places sleeping from three to eight people, where you can have the village to yourself once the day-trippers go home at night. 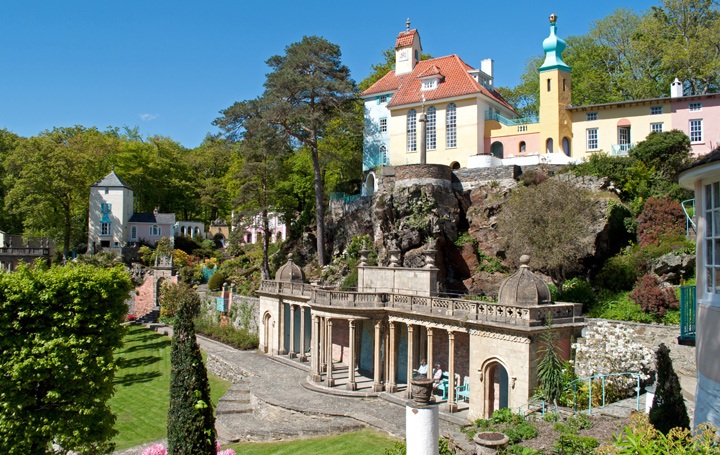 Looking down on the Colonnade, formerly a Bristol bathhouse

It’s so easy to forget where you are in Portmeirion. When the sunshine makes the pastel shades of pinks and yellows pop. When you’re sipping a glass of wine on a terrace overlooking the sea. Or when you follow the headland round the corner and come across a wide, white sandy beach. Portmeirion is a place crammed full of mirages and tricks wherever you look. But in amongst them all, turning this quiet patch of North Wales coastline into a miniature Mediterranean paradise was Williams-Ellis’ biggest illusion of all. 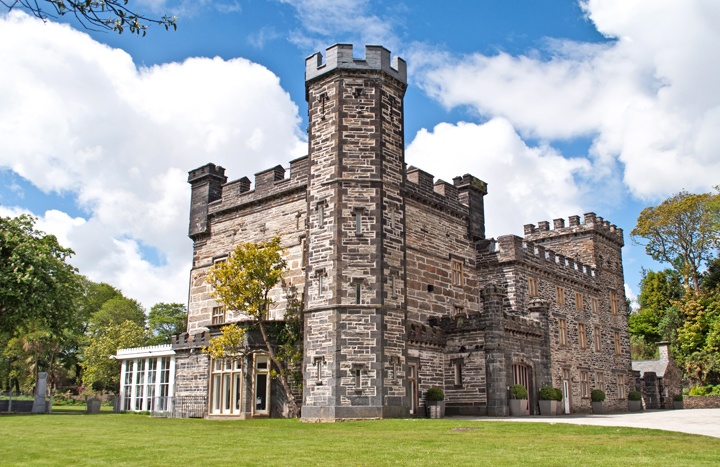 Portmeirion is a few miles south-east of Porthmadog on the North Wales coast. It’s open to visitors every day from 9.30am–7.30pm. Entry costs £8 for adults and £7 for students/over 60s. If you’re staying in the village you don’t have to pay. You can also get a voucher for free entry if you have a two-course lunch at Castell Deudraeth – a castle turned hotel and restaurant at the entrance to Portmeirion – or Sunday lunch at the Hotel Portmeirion. There’s parking just outside the village or if you’re travelling by train, Minffordd is a mile away which is a stop for the Ffestiniog steam railway as well as for mainline trains. 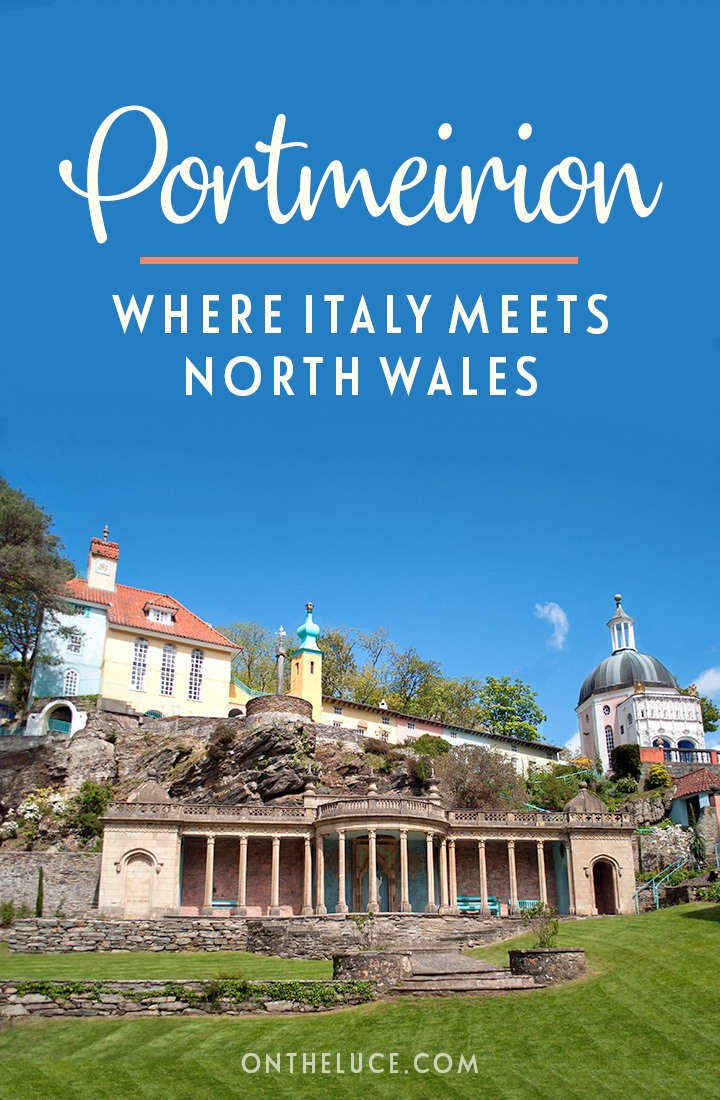 This article contains affiliate links, where I get a small commission at no extra cost to you.

It's absolutely wonderful and has a very calming influence on an old man like me when I go in off-season periods. The tv in rooms has a Prisoner channel that shows the series non-stop, and there are delights above the village like a Chinese-style lake (where I found a horde of mating toads one spring!) and a pet cemetery with a huge carved wooden tombstone in the shape of one of the dogs buried there. Going next month for a few days and can hardly wait.

It's such a unique place, really magical – hope you have a great time!

Wales is brilliant for holidays and day trips - you just need to know where to go!

There are some great places to visit – and such a varied landscape too.

Wow, this brings back memories of visiting as a child, and i'm such a fan of The Prisoner. I wasn't born to see it first time around but they used to show the repeats when I lived in France, amazing!

I've still not seen many episodes of The Prisoner but will have to work my way through the series now I've been to Portmeirion!

Thanks, it was such a unique place!

I visit Portmeirion on a school geography trip many moons ago but I had forgotten about it until now! I love the pretty pastel coloured buildings, and I remember everybody being soo friendly! Definitely a place to return to one day.

Everyone was very friendly when we were there too, maybe it's being surrounded by that beautiful landscape and all those bright colours!