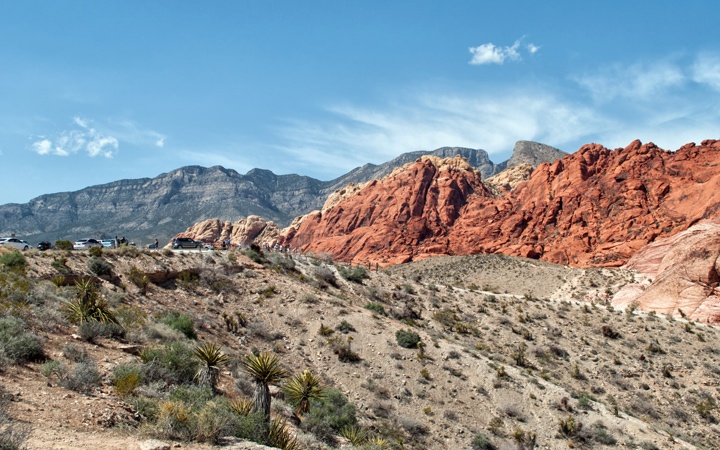 When you think of Las Vegas, it’s the man-made city of casinos, neon signs, towering hotels, bustling traffic and streets packed with people that comes to mind. The city where you can visit Paris, New York and Venice without ever leaving the Strip. The city where nothing is real, where people go wild and escape their everyday lives. But you don’t have to go far outside the city to find an area that’s a different kind of wild. Red Rock Canyon is a National Conservation Area only 15 miles from the Las Vegas Strip. You can even see it from many of the hotels, with its peaks rising up 900 metres out of the flat plain surrounding the city. It sees over a million visitors each year, escaping the excesses of Las Vegas to do something a bit more wholesome, like climbing, hiking or horse riding among the rocks that give it its name.

After a few days among the madness of the Strip, we decided to join them, so hired a convertible for the day and headed out to the Canyon. Following a tip-off from a guy at the car hire desk, we stopped off at Calico Basin Red Springs first. It’s just outside the conservation area so there isn’t an entry fee and it’s much quieter, so perfect to stop for lunch. There are barbeques you can borrow as well as shady picnic tables – even in early April the temperatures were pushing 30°. 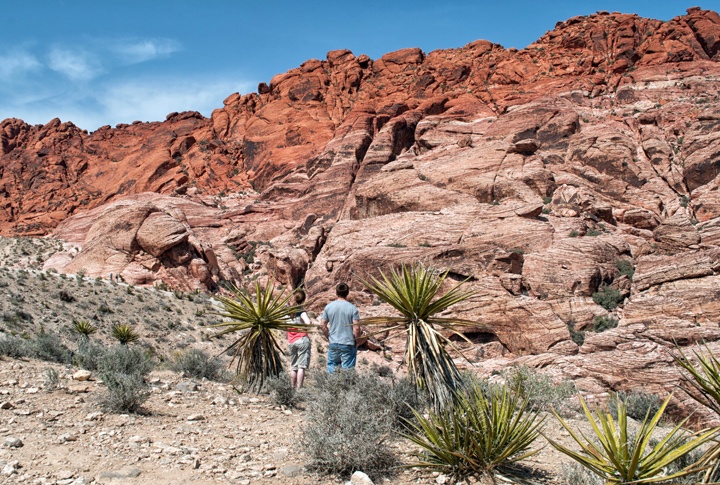 Some of the red rocks in the Canyon

There’s a half-mile track that takes you through the meadow on a wooden boardwalk, so the delicate vegetation below doesn’t get damaged. Four springs flowing from the rocks here make the area a rare patch of greenery in amongst the dry desert soil. The water source attracted settlers thousands of years ago – you can still see some of the Native American rock carvings – but it’s left to the birds and wildlife now. From Calico Basin we drove on into Red Rock Canyon itself, where a 13-mile scenic drive starting from the visitors’ centre loops you through a series of rock formations, viewpoints and trailheads. 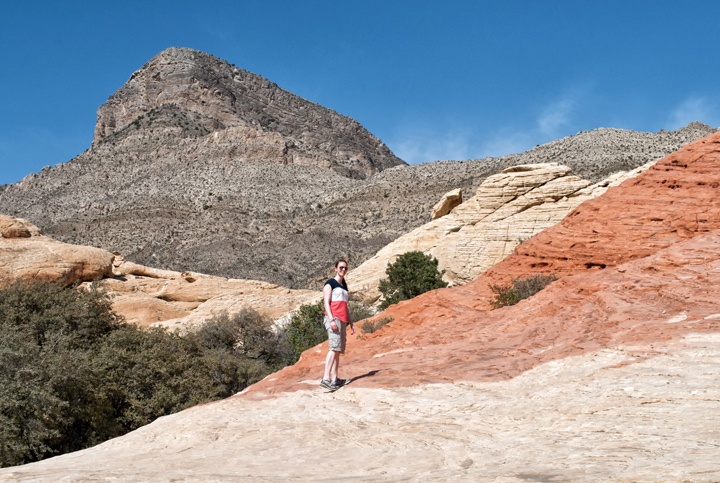 Colourful rocks in the Sandstone Quarry area of the scenic drive

The rocks rise up steeply here, striped in different shades of reds, pinks and yellows. The area gets its unusual geology from the Keystone Thrust, a thrust fault that occurred about 65 million years ago. It fractured the layers of rock, pushing the older rocks over the younger ones. So you have the red limestone which has rusted in contact with the air, mixed with the light Aztec Sandstone formed from fossilised sand dunes. It makes some spectacular patterns, especially around the Limestone Quarry area where the swirls of red and cream coloured rock almost look like they’ve been painted on. 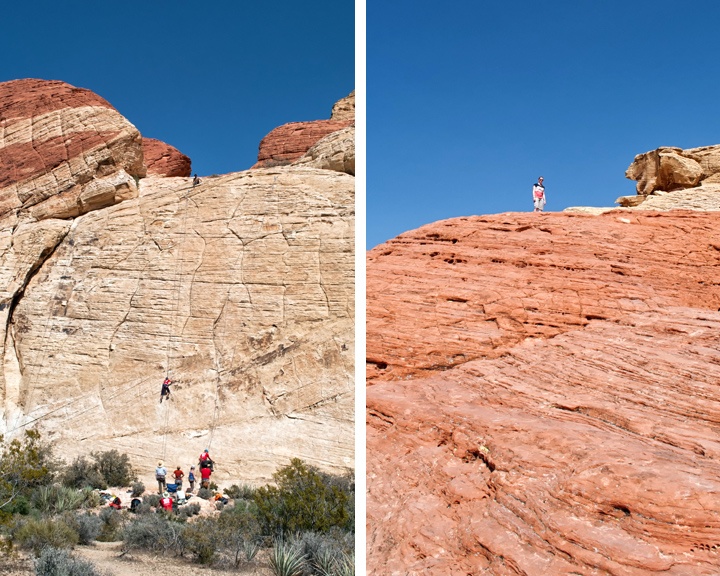 Rock climbers in the Canyon

There are hiking trails all around the canyon, ranging from just under a mile to five miles. But we stuck to just clambering over the rocks to check out the views. If you want to do a bit more serious rock climbing then this is a popular place for it. Standing at the first viewpoint I spotted a climber on the rock face and then started to see them all over, like tiny ants from a distance. From the high spots – whether you’ve climbed up there or from the viewpoints along the road – you can see past the rocks and on to the Strip in the distance. It’s only a few miles away but it feels like a whole different world. 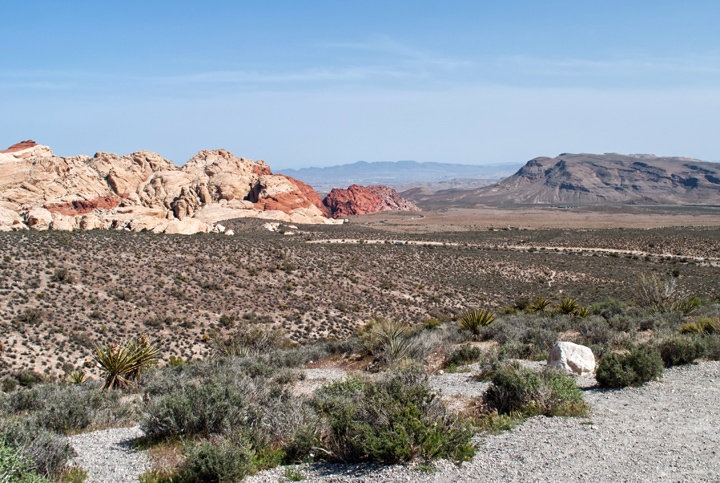 Red Rock Canyon is 15 miles west of Las Vegas on Charleston Blvd (State Road 159). It’s open from 6am until sunset, and the visitor’s centre is open between 8am and 4.30pm. Entry costs $7 per car, $3 for bikes/pedestrians or it’s free with a National Parks Pass. The easiest way to get there is to hire a car, otherwise Pink Jeep Tours run a four-hour guided tour from Las Vegas costing $75 per person. 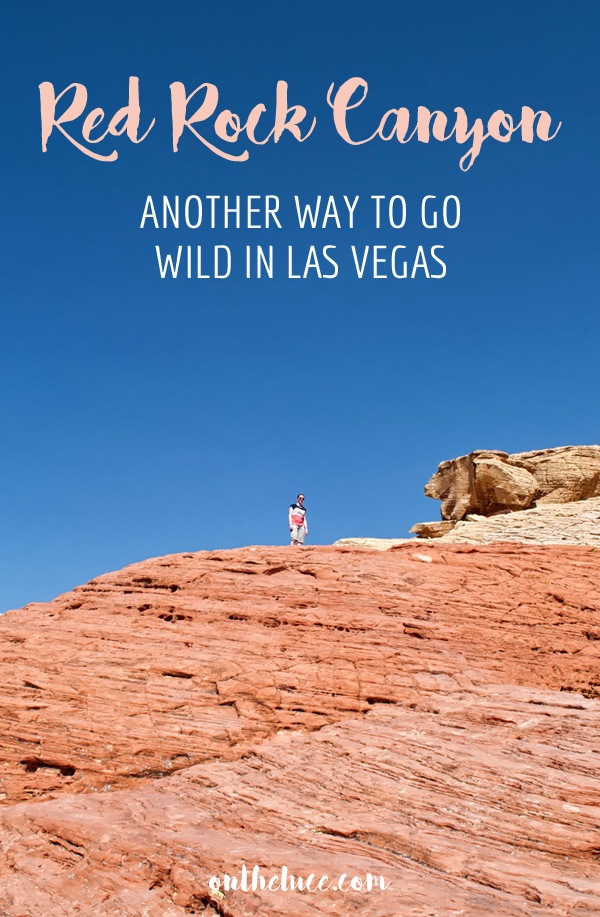 Seems more appealing to me than the casinos :-) Fab photos Lucy.

It was a very nice change. So hot and dry out there though and that was only in April, can't imagine wanting to go hiking or cycling mid-summer!

I had no idea about this so thank you. If I ever get the chance to go back to Vegas and I feel the need to escape the city I know where I'll be heading.... wonderful shots too :)

Thanks, it was a lovely place to spend the day and definitely a bit of a contrast from the rest of my time in Vegas!

Great post! I'm probably going to Las Vegas this summer so its good to know what other options there are to enjoy, now I'll make sure i make a little trip to Red Rock and do some fun hiking! I bet the photos that I'll get out of this will be awesome!

Hope you enjoy your trip – it's a great place for photography with all the colours and contrasts, and the sunshine helps too!

I have heard rave reviews about Red Rock Canyon from friends over the years, but somehow never realized that it was near Las Vegas. Good to know!

I'd not heard of it until just before my trip but a few different people mentioned it to me so I knew I had to go and check it out, and very glad I did!