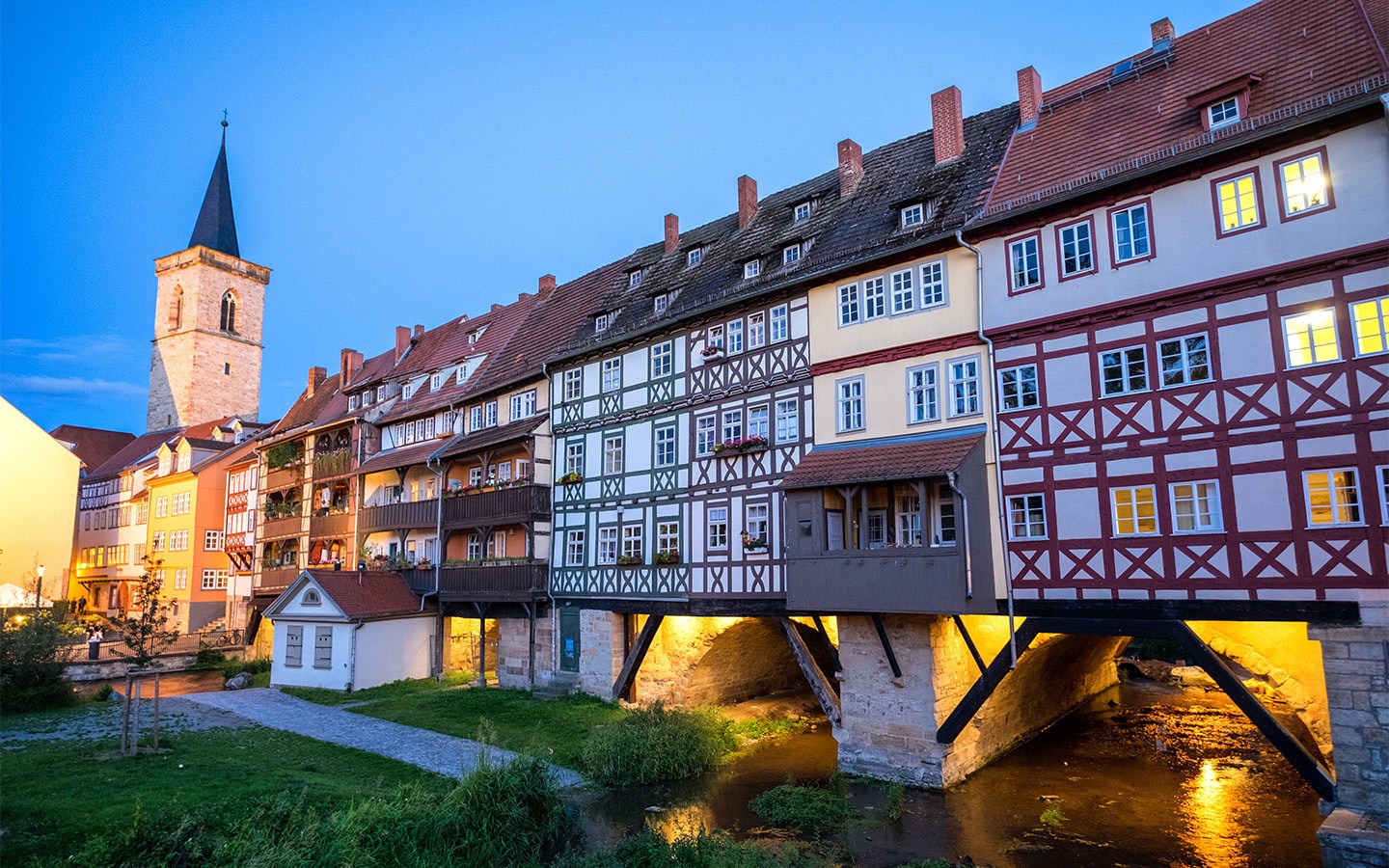 I don’t know about you, but when I’m planning a European weekend break, I tend to think of the big cities – Paris, Amsterdam, Barcelona. But if you’ve only got a few days, you’ve got no chance of seeing a fraction of somewhere that big. So instead I’m starting to go for smaller destinations where you can really get a feel for the place, even in just a weekend. So on my recent trip to Germany, rather than heading to a big name like Berlin or Munich, our destination was the region of Thuringia and the cities of Erfurt and Weimar. They might not be that well known in the UK or US, but Germans have long caught onto their charms. And the bonus of being somewhere smaller is you can even fit two destinations into the one weekend.

Set in the former East Germany, right in the heart of the country, both cities are packed with culture and history. They’ve been home to intellectuals, writers, artists and composers over the centuries. Both have well-preserved historic centres, with half-timbered buildings and cobbled streets. Both are compact so you can easily get about on foot. Both have great restaurants serving Thuringian dishes using ingredients from the nearby countryside. But each has a slightly different feel and its own individual stories. 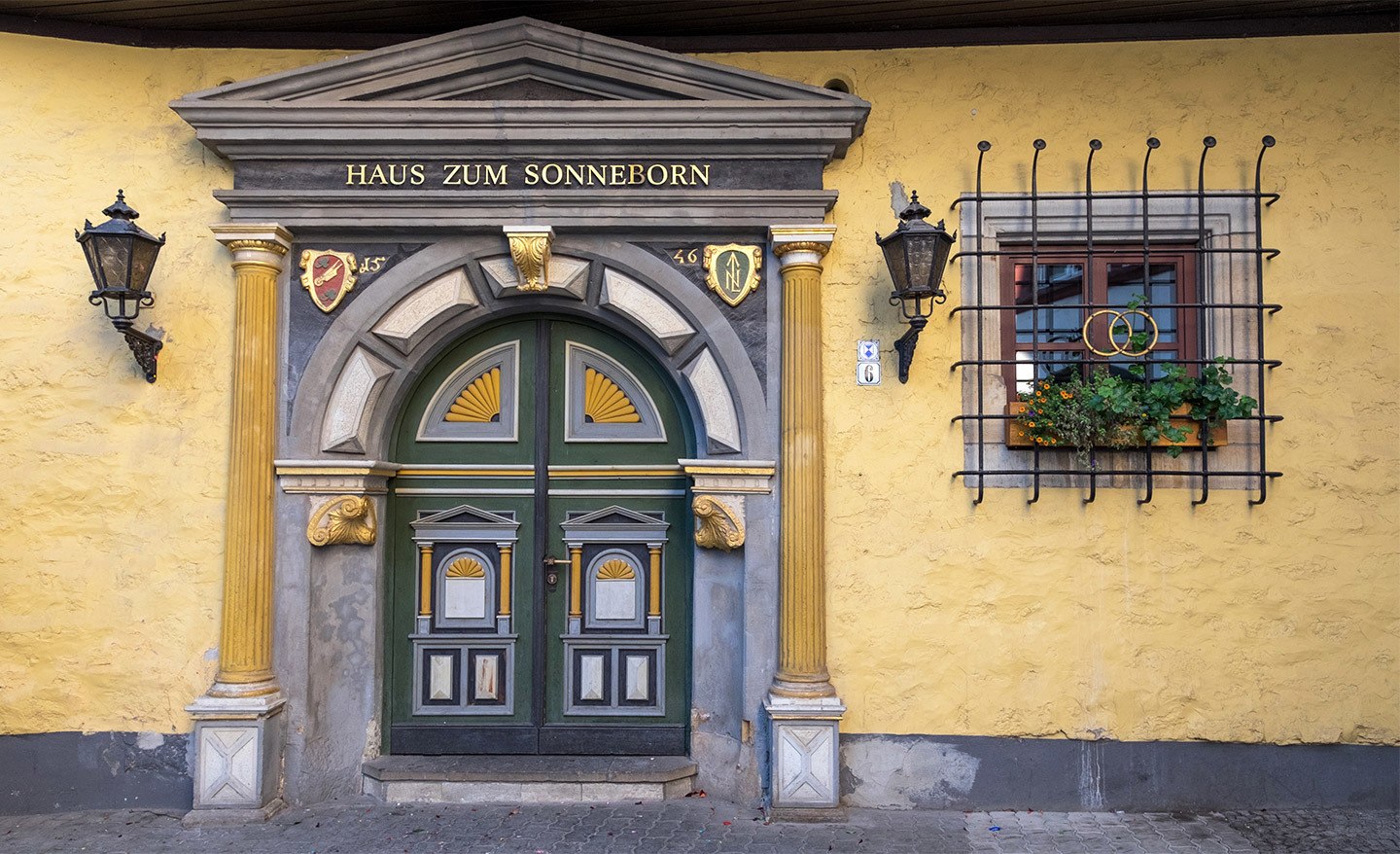 Our first stop was Erfurt, the historic capital of Thuringia. It’s a storybook pretty spot, with a medieval centre set around a shallow river. Its position on a major trade and pilgrimage route in the centre of the country made it a powerful place. And the historic buildings are still incredibly well preserved, partly as there wasn’t much damage in the Second World War and partly as it was left as it was during its days as part of East Germany. So a lot of Erfurt looks like it hasn’t changed much for centuries. The most famous street in town is the Krämerbrücke – aka the Merchants Bridge. A bit like the Ponte Vecchio in Florence, its an inhabited bridge, lined with colourful half-timbered buildings where people still live and work. 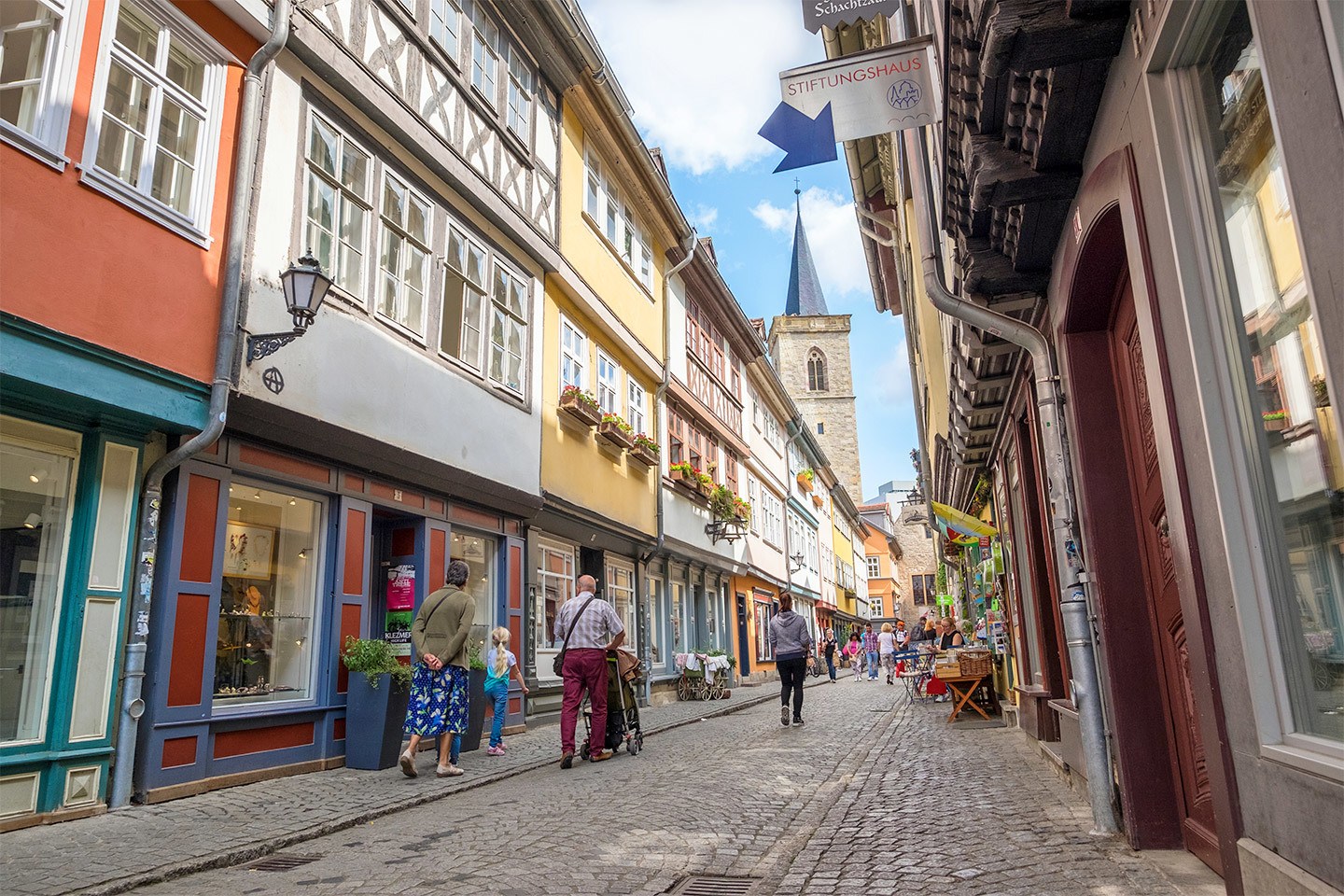 Originally they’d have been selling woad (to make dye) or supplies to passing merchants, but today it’s lined with galleries and shops selling ceramics, jewellery and fabrics – plus a very good ice cream shop (would be rude not to!). With houses packed tightly each side it’s easy to forget you’re on a bridge not just on a normal street. Originally there were 62 buildings but most have been knocked through to give more space so there are only 32 now, with shops on the ground floor and living space above. You can take a look inside one of them to see how people used to live – down to the bathroom hatch straight into the river. And for a great bird’s eye view down onto the bridge, you can climb up to the top of the church tower at one end. 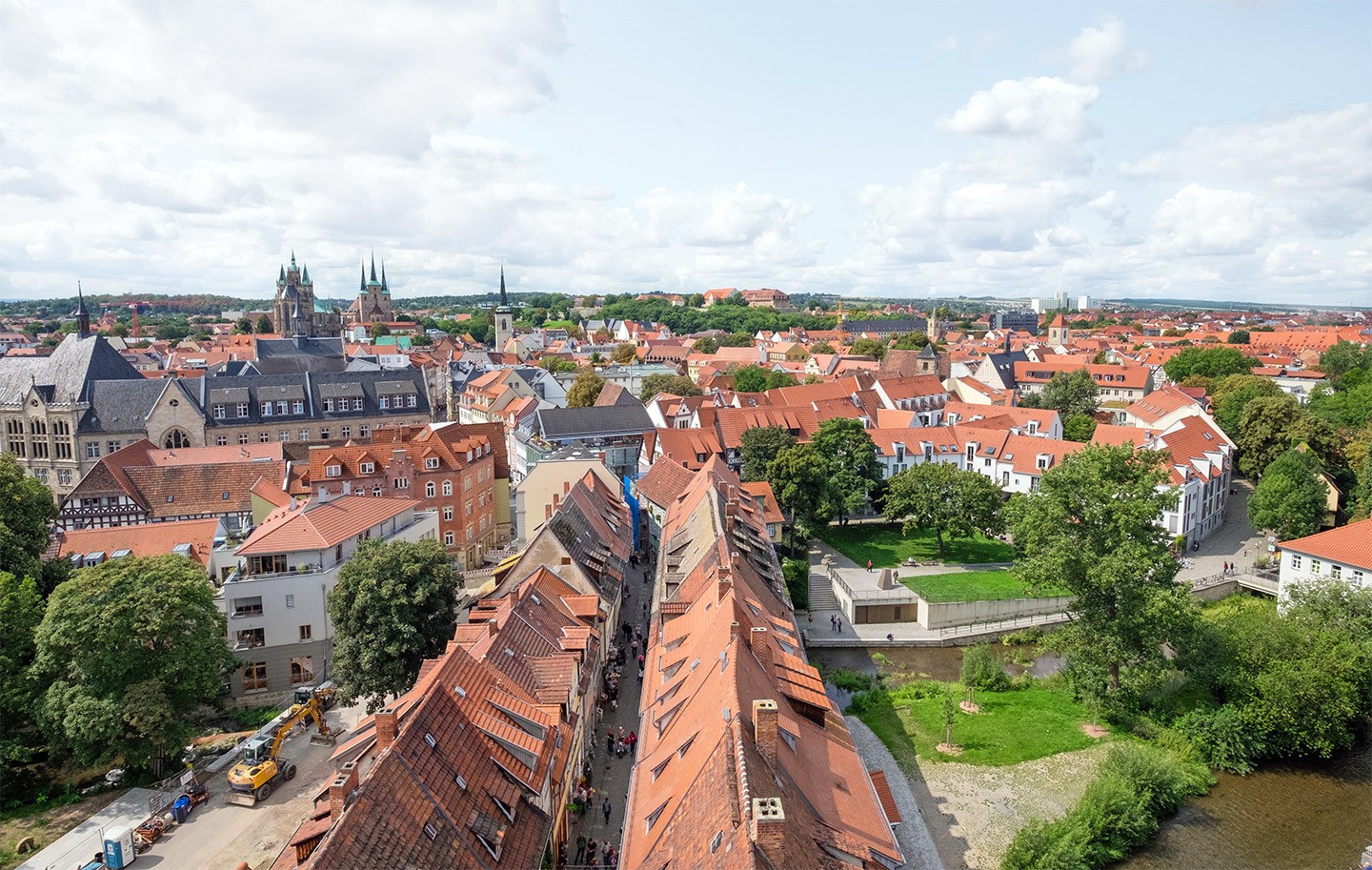 Views from the church tower

Churches seem to be everywhere in Erfurt, with over 30 spires, including the twin spires of the Gothic Church of St Severus and St Mary’s Cathedral. Unusually they’re right next door to each other because one was originally used as a nunnery. The cathedral is also where Protestant reformer Martin Luther was ordained as a priest, particularly important this year as it’s 500 years since the Reformation. Each year there’s a big opera festival where the 70 steps up to the churches are turned into an open-air stage for the Cathedral Steps Festival. Not so good for my night-time photography plans (the photo below shows what it should look like!) but we did get to soak up some music under the stars in the cathedral square. 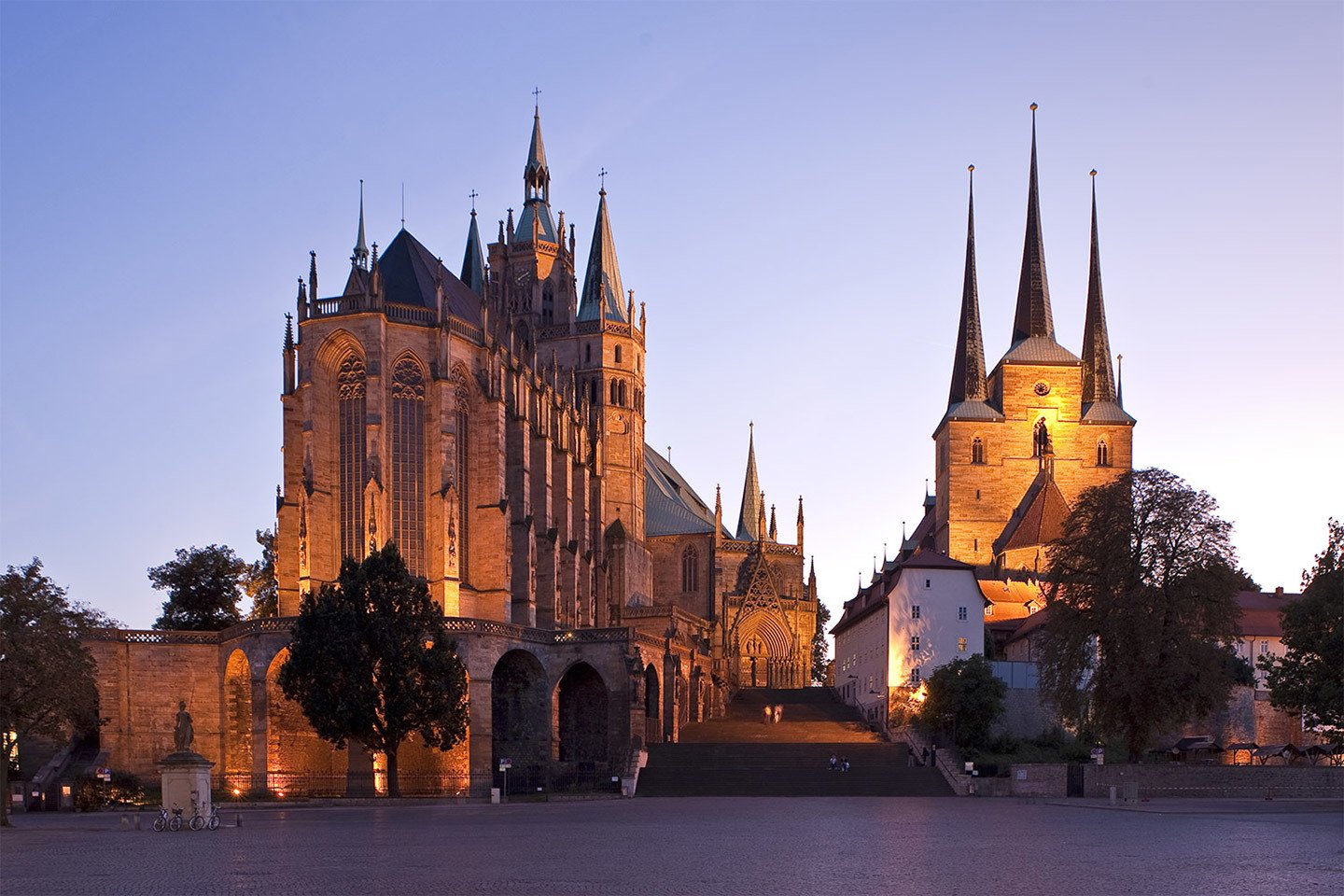 As well as its Martin Luther connection, Erfurt also has an unexpected fascinating Jewish history. The medieval city had a big Jewish population, but up to 3000 people were killed in 1349 when they were blamed for the Black Death. Centuries later in 1992, old tax records revealed where the city’s synagogue used to be, in a building that had been a club and bowling alley. It was restored and now houses part of an immense collection of treasures from the 13th and 14th centuries that had been buried, with thousands of coins, jewellery and a beautifully ornate wedding ring. Also found was a mikveh (a ritual bathing house), uncovered by archaeologists in 2007 and now tucked away in an unassuming building next to the river. 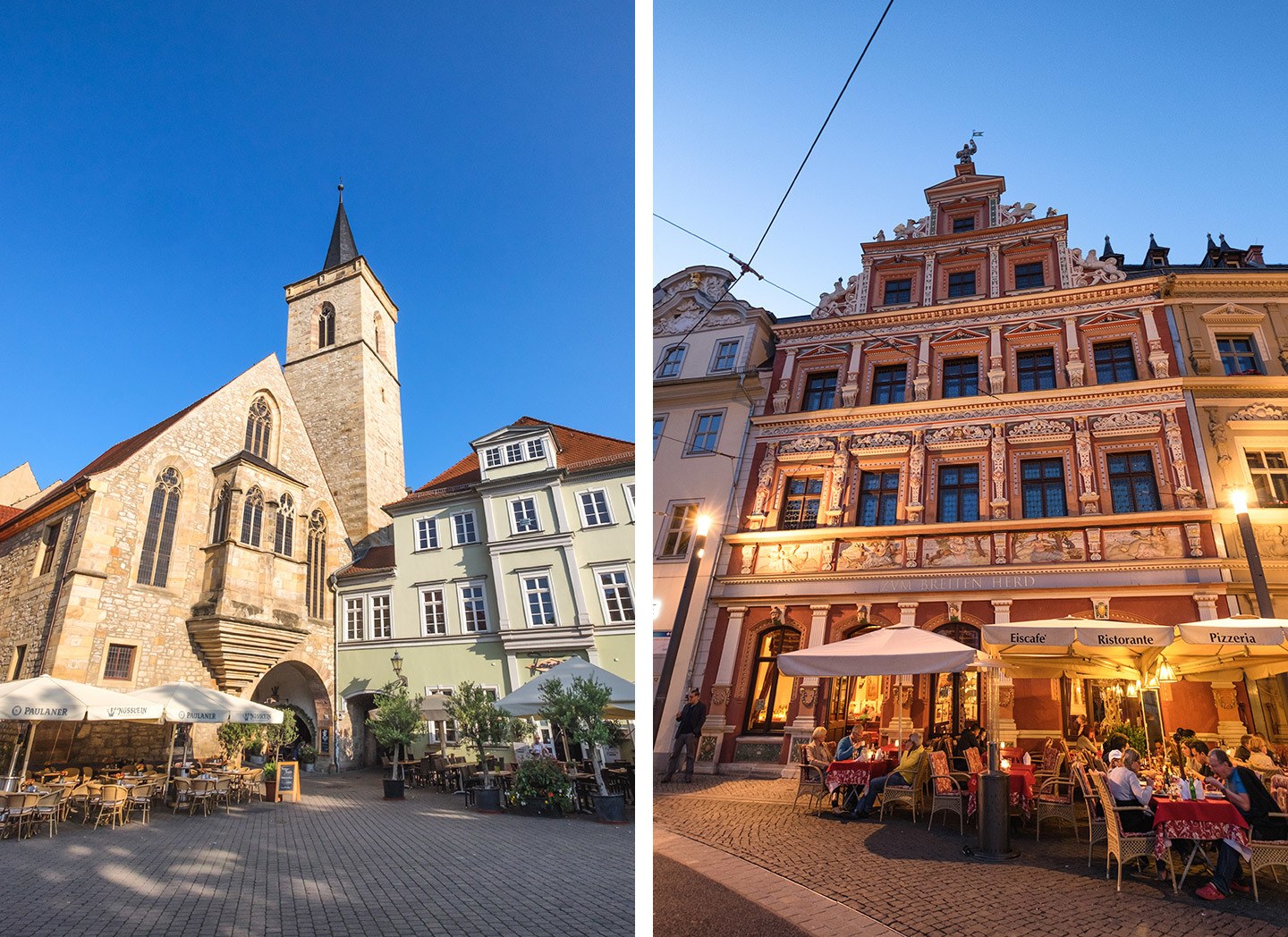 Erfurt is one of those places with an interesting story around every corner, and miles of little backstreets to get lost in. There’s the Fortress Petersberg on a hill overlooking the town with miles of secret underground tunnels beneath it. Or the Fischmarkt square where the old trade routes used to meet, which has plenty of pavement cafés for a hot chocolate/beer and people-watching session. Its size gives it a relaxed feel and it doesn’t take long until you know your way around – and it might be hard to drag yourself away. 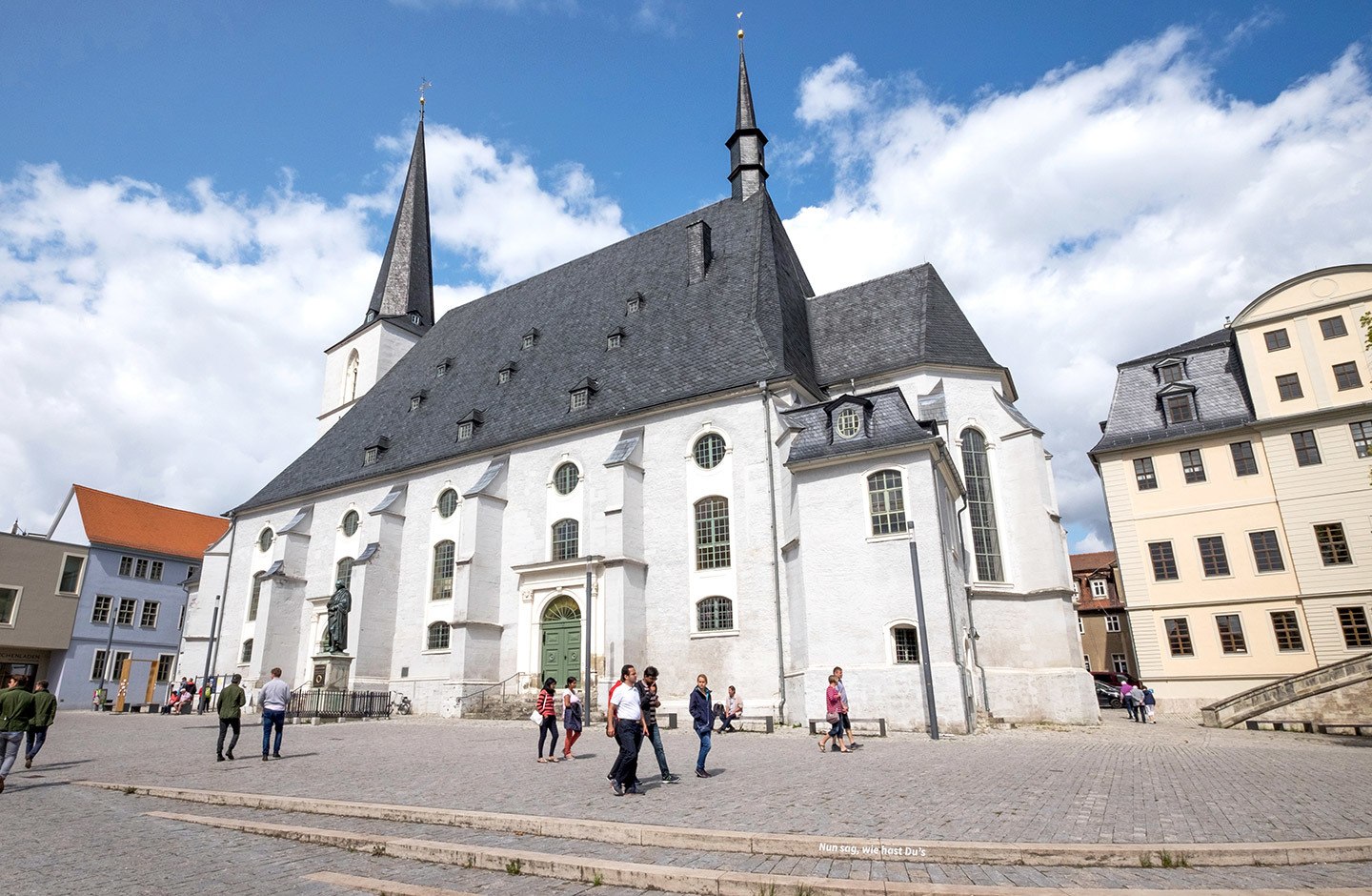 Less than a 30-minute drive away, Weimar is a bit smaller than Erfurt but it’s bursting with UNESCO World Heritage Sites, with no less than 16 buildings recognised by UNESCO. Pretty impressive considering there are only 65,000 residents. And a lot of that is thanks to one woman – Duchess Anna Amalia – who ruled over Weimar in the 1700s. She loved the arts and encouraged writers, composers and thinkers like Johann Wolfgang von Goethe, Friedrich Schiller, Franz Liszt, Richard Strauss and Friedrich Nietzsche to come to Weimar. She helped fund their projects and brought them together so they could inspire each other. 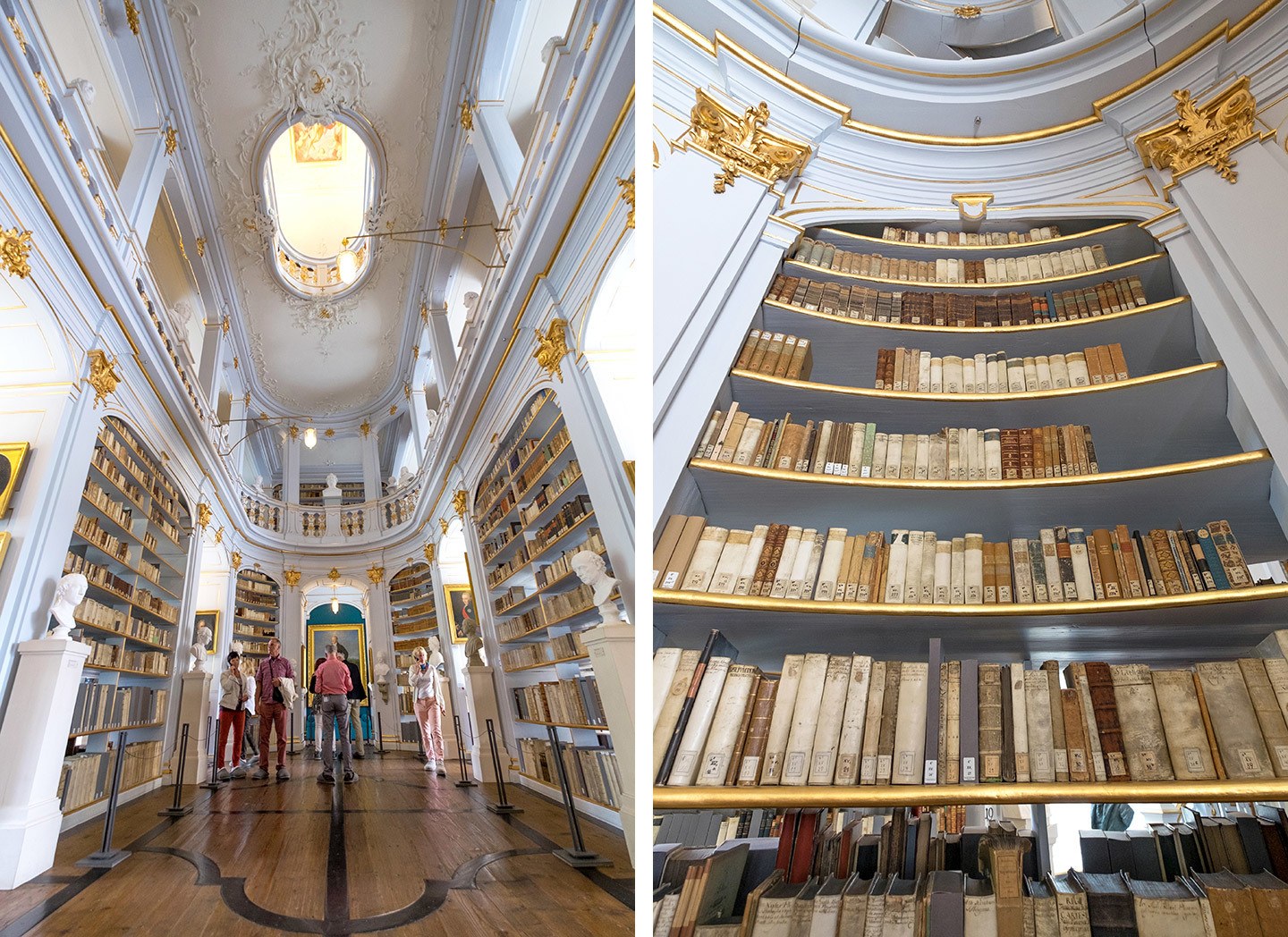 Inside the Anna Amalia Library

Anna Amalia also set up one of the most ornate libraries I’ve ever seen, a white-and-gold Rococo extravaganza full of carvings and artworks. It’s one of Germany’s most-loved libraries, with over a million books and artefacts in its collection. But in September 2004 it was almost destroyed when fire broke out in the roof, just before it was about to be renovated. Local residents formed a human chain to help save some of the rare books, but 50,000 were damaged and some are still being painstakingly repaired. Access is limited to 290 visitors a day so need to reserve a place in advance if you want to take a look around. 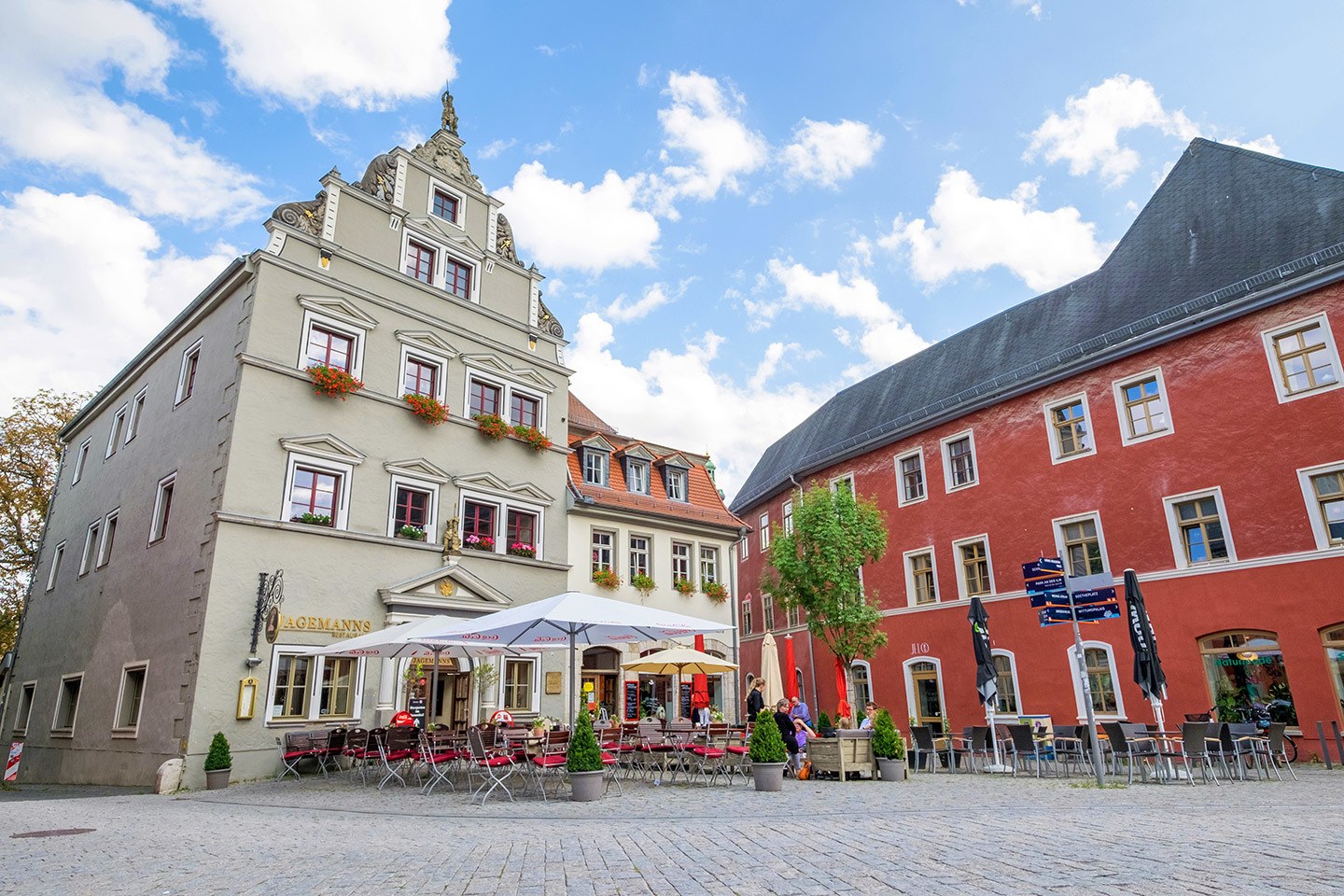 There’s almost a mind-blowing concentration of culture in Weimar. You keep coming across more famous names – Bach composed his organ concertos here, Liszt was a conductor at the Ducal Court. But one name which keeps coming up is Goethe. Before I went to Thuringia, I didn’t know a lot about Goethe, but he’s everywhere you look in Weimar. He’s almost Germany’s equivalent to Shakespeare, with a huge cultural legacy as a poet, playwright, scientist and leader. We took a tour around his house and garden in the centre of Weimar, where he lived for almost 50 years until he died, and which still has a lot of the original furniture and fittings. You can also tour the house of his friend and fellow poet Friedrich Schiller nearby. 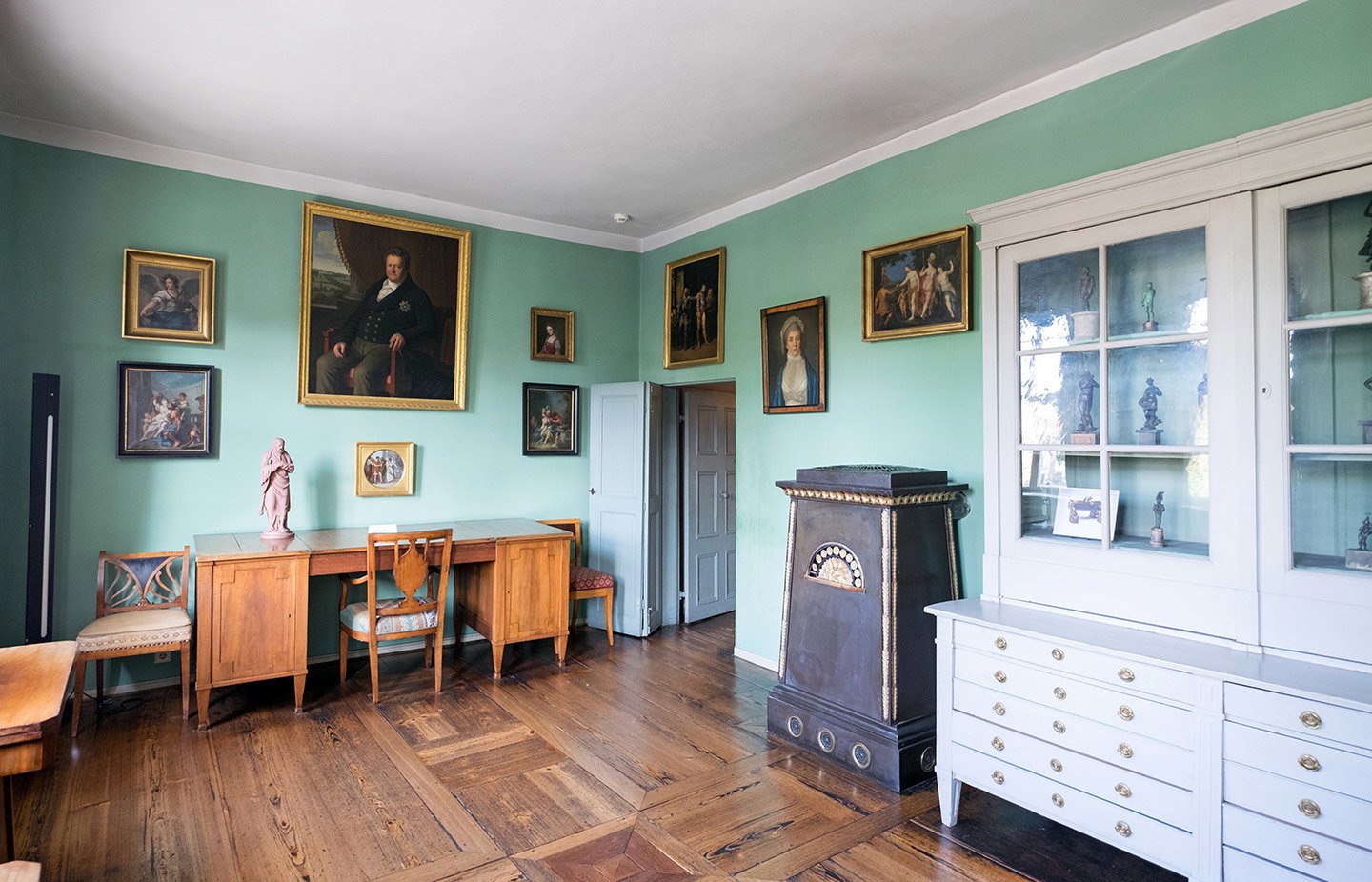 Weimar’s cultural importance isn’t limited to the distant past either. It was also where the Bauhaus art and architecture movement was founded in 1919. So in among the classical buildings there’s the modern Bauhaus University. At the same time, Weimar was where a new constitution for Germany was drafted after the First World War. You can see why Weimar inspired so many people – you’re surrounded by culture and history, there are beautiful buildings everywhere you look and a huge park perfect for contemplating your next poem or theory (or even blog post). Seems that good things really do come in small packages. 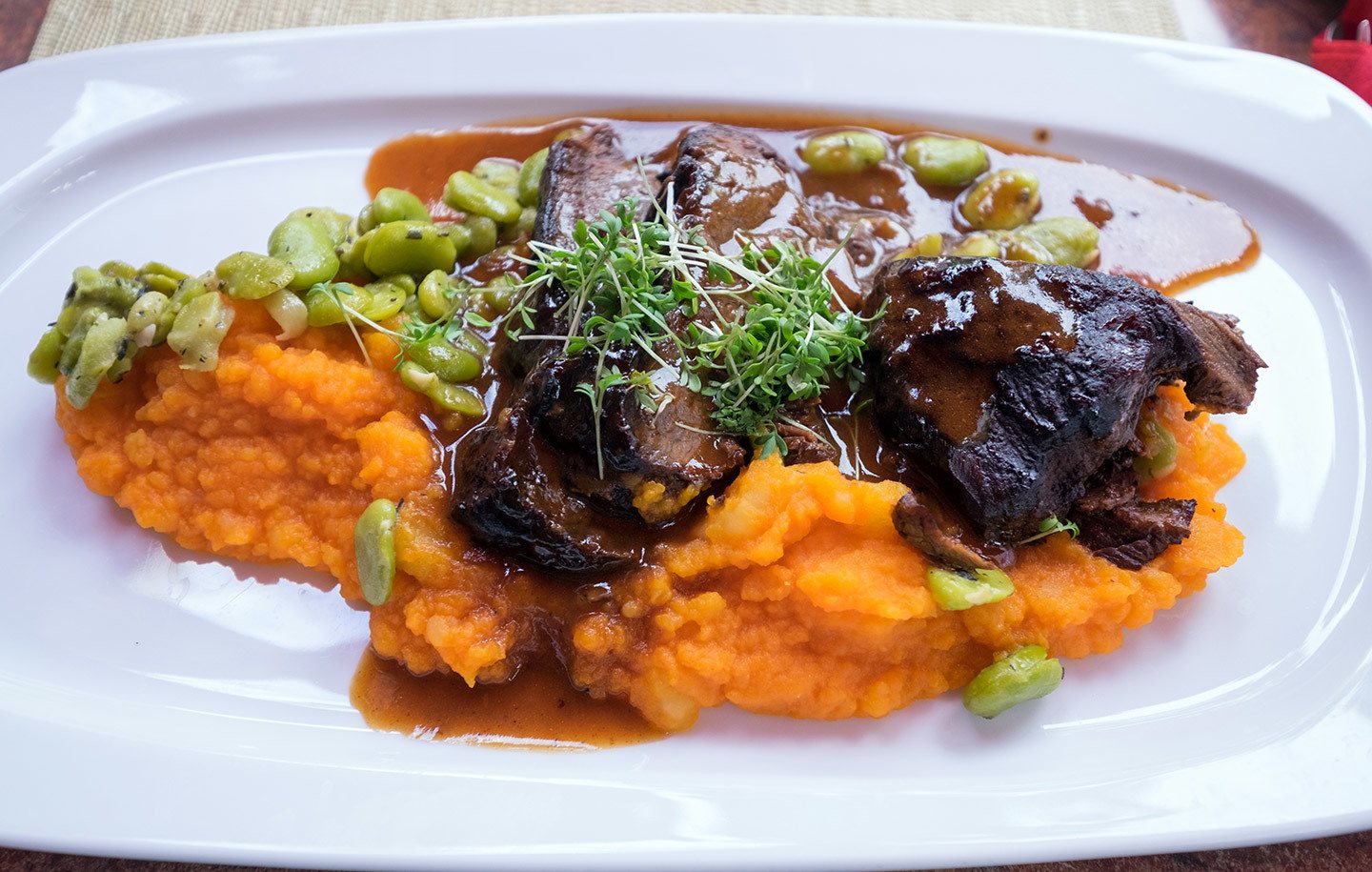 Where to stay: In Erfurt, we stayed in the smart, modern Mercure Erfurt Altstadt, about five minutes’ walk from the Krämerbrücke Bridge. In Weimar, the Hotel am Frauenplan is another good location, on a pedestrianised square overlooking Goethe’s house. It’s a more characterful historic building with rooms named after famous visitors, but a bit dated. If you can splash out a bit more, try the Hotel Elephant, an Art Deco-style building with an interesting history (Hitler was quite a fan) and a great cocktail bar.

Where to eat and drink: Thuringian food features a lot of good, hearty, filling dishes. Among the local specialities are potato dumplings and sausages made of pork, beef and a special mix of spices which are sprinkled with beer as they grill. It was also Chanterelle season when I visited so there were lots of mushroom dishes. In Erfurt, Pier 37 has a great waterside location with a big garden and a mix of traditional and veggie-friendly dishes. Being a student town means there are some good bars too – Modern Masters and Metropolitan Cocktail Bar both do fab cocktails from an immense, inventive list. In Weimar, Gretchens is a relaxed place with a quirky menu and huge portions. And head to the Köstritzer Schwarzbierhaus if you want to try some local Thuringian dark beer in a gorgeous half-timbered black and white building. 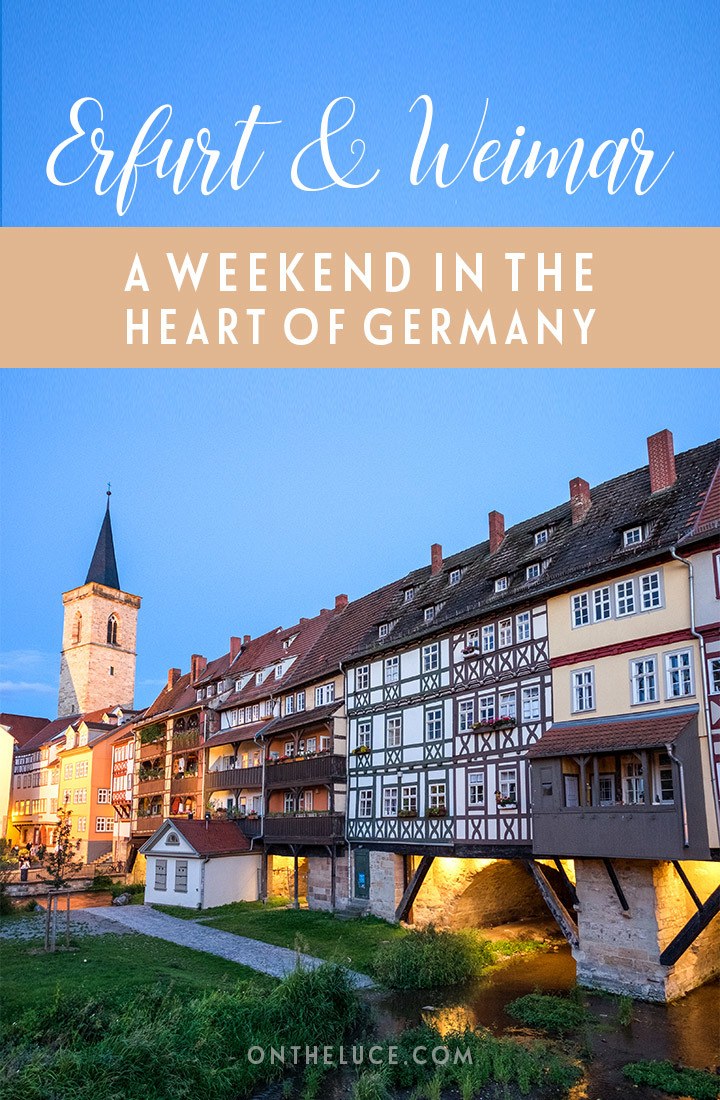 Many thanks to Visit Germany for hosting me in Thuringia. This article contains affiliate links, where I’ll get a small commission at no extra cost to you – thanks.

That's a nice roundup of both cities Lucy and great photography too! I suspect you also walked along Erfurt's most impressive street/square - the Anger. As it is hard to photograph here is a linearized street front which captures its beauty in a different way: https://panoramastreetline.com/anger-einkaufsstrasse-erfurt-deutschland-P16246

Thanks so much – and great photo!

Wow it's really beautiful ! Smaller towns are always very different of big cities that's for sure, it's the only way to feel like you're actually in Germany I guess.

They really do have lots of character!

I spent only an afternoon in Erfurt, brought there by close German friends who live in a small Dorf nearby. But I will never forget it, and I look forward to spending more time there when my wife is retired. I'm champing at the bit to go back! Erfurt to me is a wonderful blend of old and new, and no so cosmopolitan as to lose it's classic German charm - there is a downside to globalization!

Hi Daryl, yes it's a lovely place – such beautiful architecture and so much charm! I hope to get back and explore some more soon too.

There are so many places I'd love to visit in Germany and these are definitely now on the radar too. The architecture is beautiful and wow - that library is something else!!! Great post!

The library is amazing isn't it – never seen anything like it! It was so lovely to explore some more of Germany, I'll definitely be back again soon.

The article sparked so many memories, thank you for that!

You're very welcome – such a lovely area!