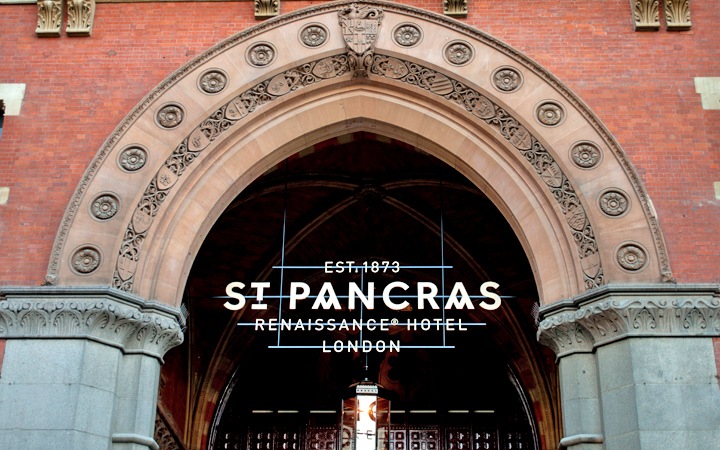 One of the benefits of spending a lot of time in France this year is the amount of times I’ve passed through one of my favourite London buildings – St Pancras Station. It’s a stunningly ornate Victorian Gothic-style building. And as you walk through the red-brick archways and under the huge, arched glass roof, it’s hard to believe that only 50 years ago it was on the verge of being knocked down. Now it’s home to the international Eurostar services as well as trains to the north of England. It has been beautifully restored and is well worth a visit, whether you’re catching a train or not. 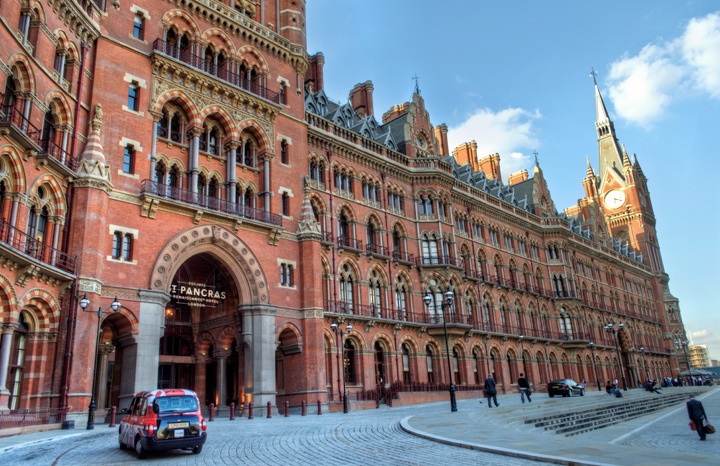 The station was originally built in the 1860s by the Midland Railway to connect London with the Midlands. St Pancras was a pretty slummy area at the time but the railway company went all out to impress by commissioning a grand, lavish station and hotel. The train shed, designed by William Henry Barlow, was build on wrought-iron pillars topped with a 207 metre long and 70 metre wide glass arched ceiling – making it the largest enclosed space in the world at the time. And at the front was the Midland Hotel, designed by the architect George Gilbert Scott. He won a competition to design the hotel with his ornate Gothic red-brick design, impressing the railway company into blowing their budget on it. 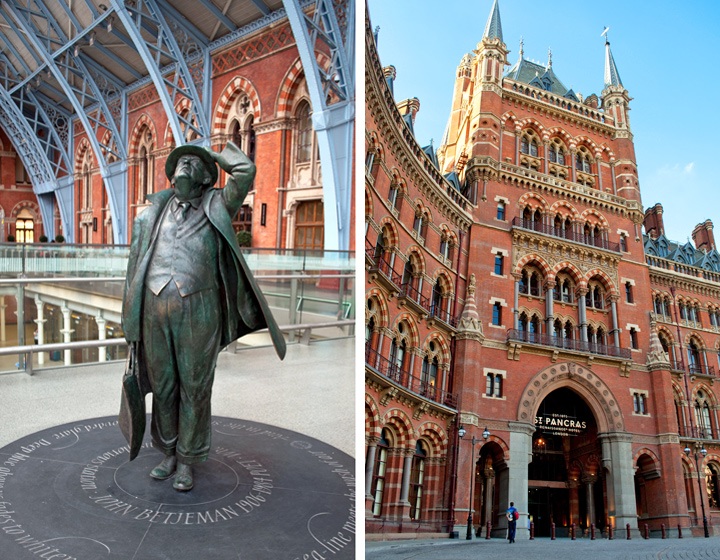 John Betjeman, commemorated with a statue for his campaign to save the station

But things started to go wrong for St Pancras in the 20th century. First the Midland Hotel closed down in 1935 and the building was used for railway offices. Then it was damaged by bombing during the Second World War. And finally changes to rail routes meant it wasn’t being used by enough train services to keep it running. The formerly grand building was seen as past its best – its impractical design made it hard to covert and it was covered with years of London soot and grime. By the 1960s there were plans to tear it down and redevelop the land into something sleek and modern. But Poet Laureate John Betjeman, a great lover of Victorian architecture, set up a campaign to save it from demolition, and in 1967 it was given Grade I listed status. Just in time too as the wrecking balls were due to move in 10 days later. 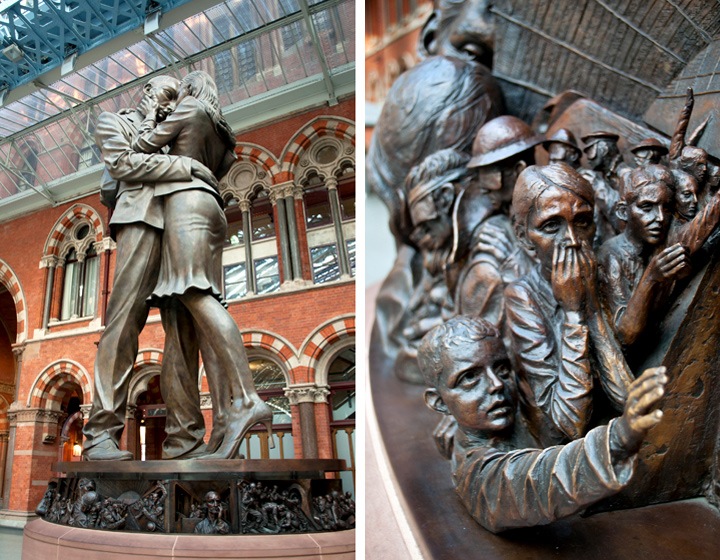 Statue of lovers on the St Pancras station concourse

Although the station was now safe from demolition, that still left the question of what to do with it. For the next 30 years it fell into decline, the former hotel buildings abandoned and the rail lines hardly used. But its fortunes changed when it was chosen as the new terminus for the international Eurostar services. It took almost 13 years and around £800 million to renovate the station, but by the time it opened in November 2007 it was almost unrecognisable. The buildings had been cleaned of their layers of grime to reveal the red-brick detail, the roof glazing had been repaired to the original design after its wartime damage, and the wrought ironwork was cleaned and repainted in its Victorian light blue colour. New shops and ticket offices were tucked into the arches below the concourse to leave the main space light and open. 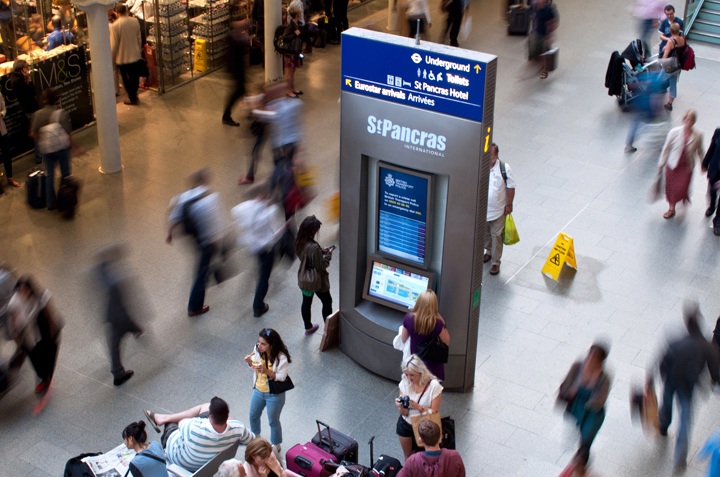 The final part of the station’s restoration was to turn the old Midland Hotel into the St Pancras Renaissance, which opened in 2011. Things are a bit different now to what you would have got as a guest of the Midland Hotel, which had the latest in electric lifts and flushing toilets, but only five bathrooms shared between its 300 rooms! It has been renovated to five-star standard and a stay in one of their restored Chambers rooms will set you back about £300 a night (en suite bathrooms are included these days). But you can have dinner in the Gilbert Scott restaurant, or try a traditional Victorian punch in the Booking Office Bar, with its 29-foot long bar and high vaulted ceilings. And while you’re there, take a peek at the spectacular Grand Staircase, where you can just imagine ladies in 1920s silk gowns and men in dinner jackets making their grand entrance to dinner (or less glamorously the Spice Girls filmed their Wannabe video here). You can find out more about the building’s fascinating history with a tour from the hotel’s own in-house historian. 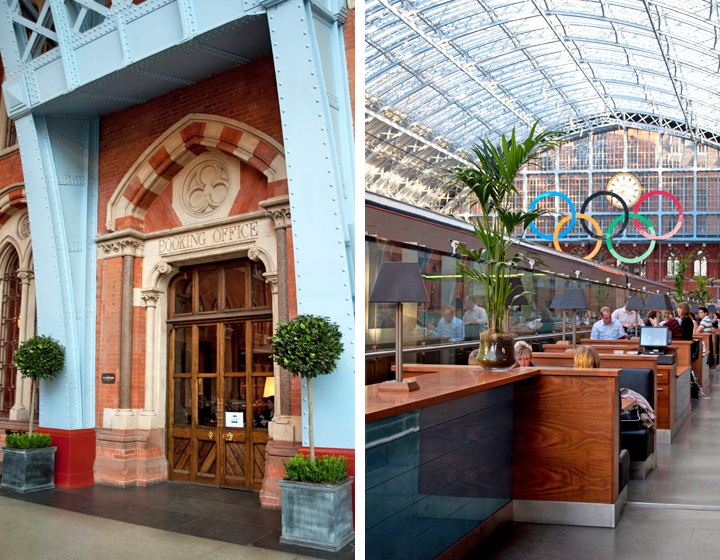 The Booking Office Bar and the Champagne Bar

The station is also home to the longest Champagne bar in Europe, which stretches along the length of the Eurostar platform. And at the end of it is a statue of John Betjeman, looking up at Barlow’s original ceiling. So if you’re ever passing through St Pancras and stop off for a glass of Champagne, raise a toast to Betjeman as without him none of this would be here today. 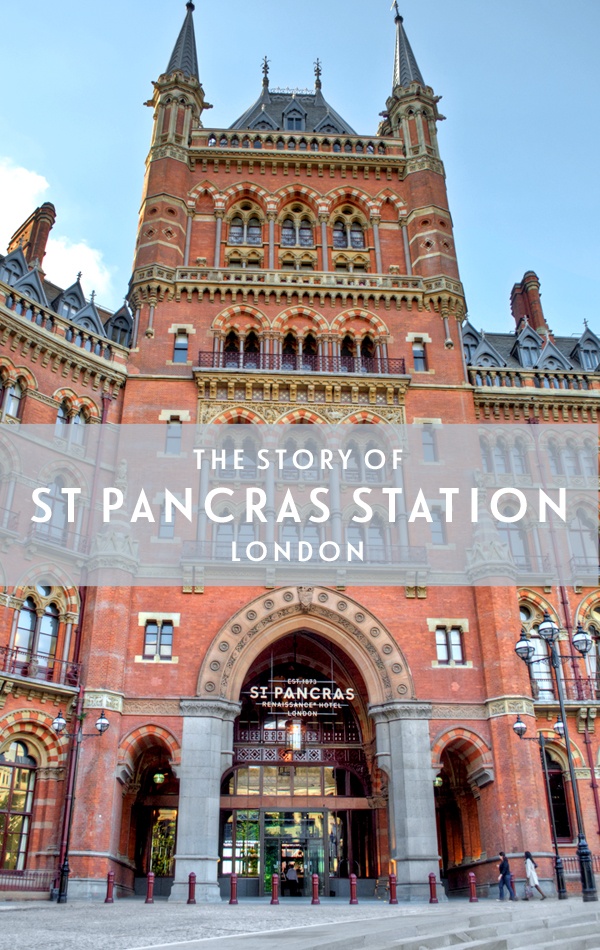 I was fortunate enough to stay in the Renaissance Hotel before a trip to Switzerland once. Great place, and a great dinner at the Booking Office, too: https://www.mwtrips.co.uk/2014/03/climbing-swiss-alps-part-1-from-london.html

What a wonderful review of my favourite station. I love going there, even as a day out. Every time I go I see more and more. I have now taken to 'Days out at St Pancras', so much to see in and around the station. On a warm day sit outside and watch the world go by, take a camera with you, I do, it is Great Britain at its best, with the history and architecture and the modern world all rolled into one.

Such a wonderful building, I love travelling from there as it always makes the journey feel extra special.

Wow - I've passed through St. Pancras quite a few times and had no idea of this history, really fascinating! I'll have to see if I can peek into the hotel sometimes.

One day I will actually go and stay there! (may need to save up for a bit longer though)

Love your writing. I live in London and I think I will take a tour of St Pancras next weekend! www.shadeofredblog.com

Hope you enjoy it, I haven't been for a few months now so may need another trip there soon!