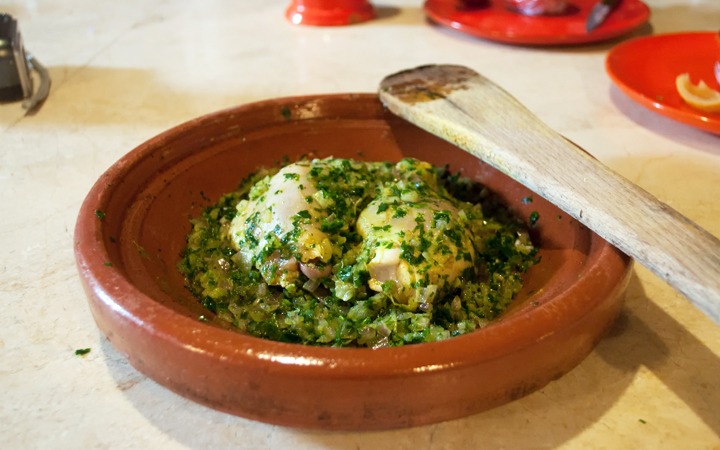 One of my reasons for wanting to come back to Morocco was the country’s food. Memories of tagines, almond pastries, fresh herb salads and mint tea stayed with me over the eight years since my last trip. And although I’ve tried recreating the flavours back at home, they’ve never been quite the same. So as soon as I decided to come back I knew I had to learn to do it properly this time. The L’Atelier Madada Moroccan cookery school in Essaouira came highly recommended, so we signed up for a half-day class. Attached to the swanky Madada Mogador hotel, classes take place under the arches of a former almond factory, converted into a modern kitchen where groups of up to eight people learn to cook a two-course meal.

Read more: Souks and sunsets – Things to do in Essaouira, Morocco 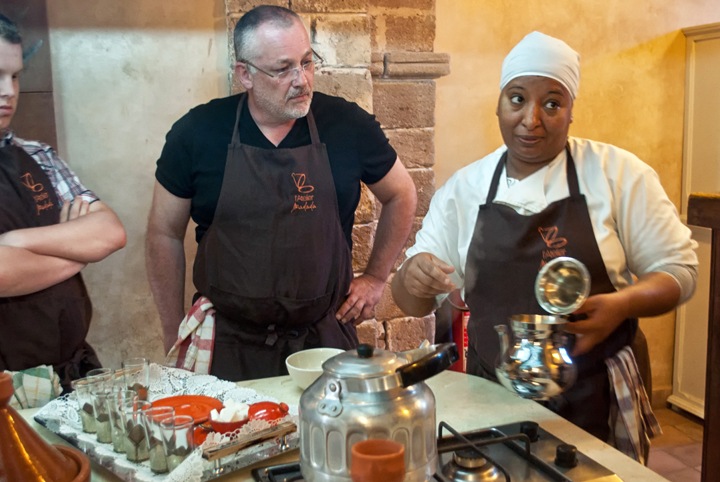 Mona showing us how mint tea should be made

Classes are run by Mona, the latest in a long lineage of dadas – female chefs who worked as private cooks for rich families in the past and run the kitchens in many of the best riads today. She was assisted by Alison, a Brit who married a Berber man and moved out to Morocco, and now acts as a translator for the bilingual cookery school. Normally whoever books onto the class first gets to choose the menu, so as we left it a bit late we were beaten to it by our classmates, a French family. Luckily they had excellent taste and went for a classic tagine – and one of my favourites – chicken with preserved lemon and olives. 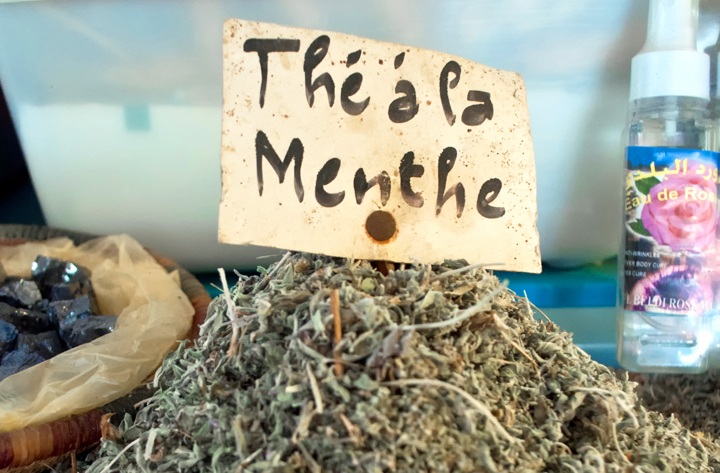 Piles of mint tea in the spice souks

But before we got to the food, the class started off with a lesson in how to make the most Moroccan of drinks – mint tea. Now I love mint tea and drink litres of it, but have never managed to get it to taste quite right, so I was watching intently. It turns out it’s all in the tea – and the sugar. Mona started off by adding a spoonful of gunpowder green tea (rather than normal black tea) to the teapot. This is boiled up and then the first glass is poured away to get rid of any dust and dirt. Then you add a bunch of fresh mint leaves and more water and boil it up again, adding as much sugar as you like (which is a lot if you’re Moroccan). Once it’s brewed you pour the tea into small glasses, lifting the teapot up high so the tea aerates as it pours. 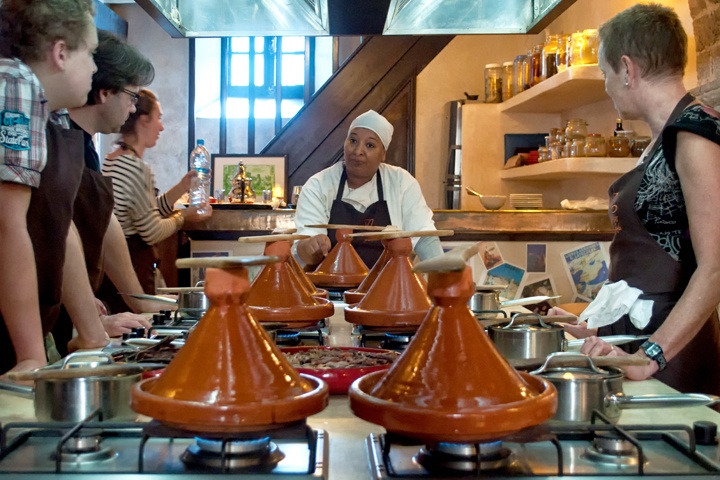 Tagines cooking (on the hob not in the oven!)

Fortified with a few glasses of tea, we set to work. As well as the tagine we were also making briouats – triangular parcels made with thin pastry and filled with meat or cheese and vegetables. We started by finely grating courgette and carrots and chopping onions for the filling. I cook a lot and think I’m pretty competent with a kitchen knife, but Mona’s got strict standards. She had us chopping those onions until they were almost like a paste. And that was only the start of the chopping – next up was the marinade for the tagine, a mixture of onion, garlic, parsley and coriander. This was rubbed all into chicken legs and wings, along with a blend of spices and a good glug of olive oil, and the tagine was ready to cook. 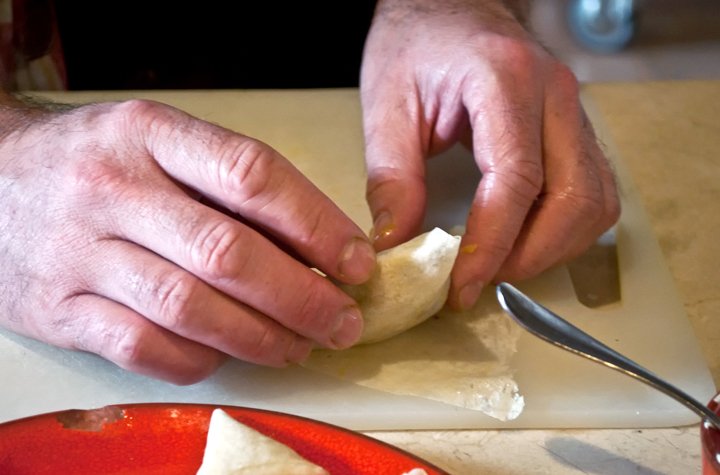 Folding the briouats up tightly

In many recipes tagines get cooked in the oven, but this isn’t the Moroccan way to do it. Mona explained they should be cooked on the hob, using a plain earthenware tagine (those pretty painted ones are more for decoration than cooking) and a thin sheet of metal to diffuse the heat. This way the heat comes from below and the steam rises up to cook the food inside. While the tagines cooked we mixed up the fillings for the briouats, one with the vegetables and the other with goats cheese and mint. The pastry used to wrap them is called brick or warqa and is paper-thin, like filo or a spring roll wrapper. The pastry is cut into long strips, a dollop of filling is added and they are folded corner-to-corner to make a triangle – under Mona’s watchful eye to make sure they are tight enough that the filling won’t ooze out as they cook. 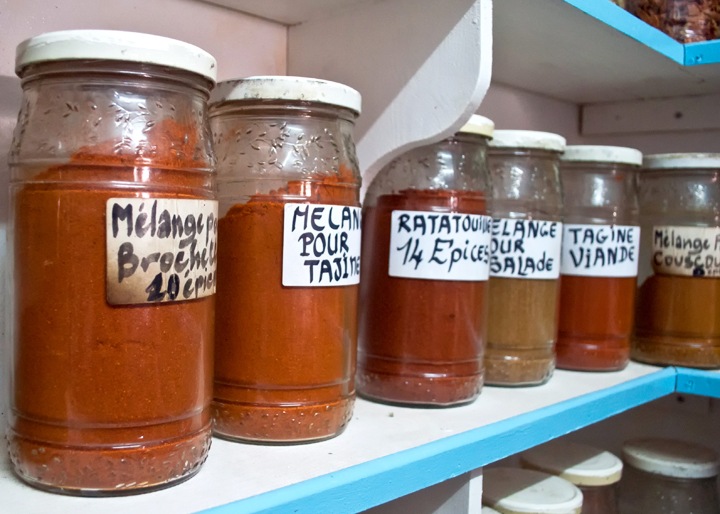 With the brouiats ready for the oven, Alison took us out into the spice souks where we met stallholder Said. He filled us in on the secrets of the herbs and spices used in Moroccan cookery – over tea of course. This was different to the usual mint though, instead we tried his ‘Royal Tea’, made with 15 different herbs and spices. He also told us all about ras el-hanout – the spice blend that makes up the heart of a tagine. I always thought this was a particular mix of spices, but actually it just means ‘head of the shop’ and every stallholder has their own individual recipe. There can be over 30 different spices included, though those rose petals you sometimes get in the versions back home are definitely not part of it. Said had separate blends for chicken, red meat, fish and couscous dishes, each with a different vivid colour and smell. 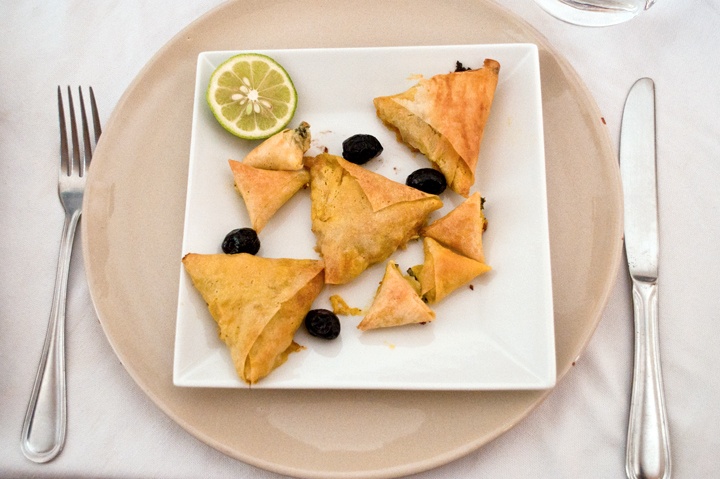 My finished (only slightly leaky) briouats

Back at L’Atelier, Mona had added the finishing touches to our tagines while we were away – a handful of green olives and slices of preserved lemon. In the luxurious dining room our brouiats were served up first, only slightly leaky (sorry Mona) but crispy and light. Then came the grand tagine unveiling, with the domed lid whipped off to reveal a bubbling dish steaming with delicious smells. The tender chicken fell off the bone and the herbs had formed a crust, thanks to all that fine chopping, to be mopped up with fresh bread (never couscous, which is a separate dish rather than an accompaniment). It was as good as any tagine I’d had in a restaurant. And armed with L’Atelier’s recipes and Said’s spice blends, back home it tastes just as great. 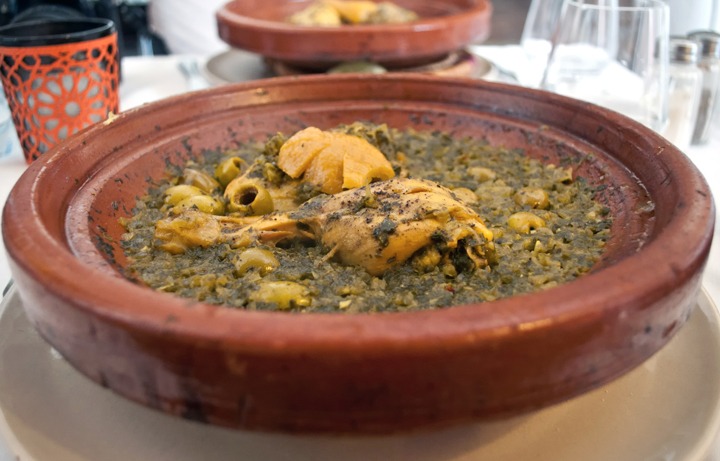 L’Atelier Madada run Moroccan cookery workshops each day from 10.30am–3pm, costing 500 MAD (approx £38) per person. They also run afternoon oriental pastry workshops from 3.30pm–5pm for 220 MAD/£17. It’s a good idea to book in advance (not least so you get to choose the menu). 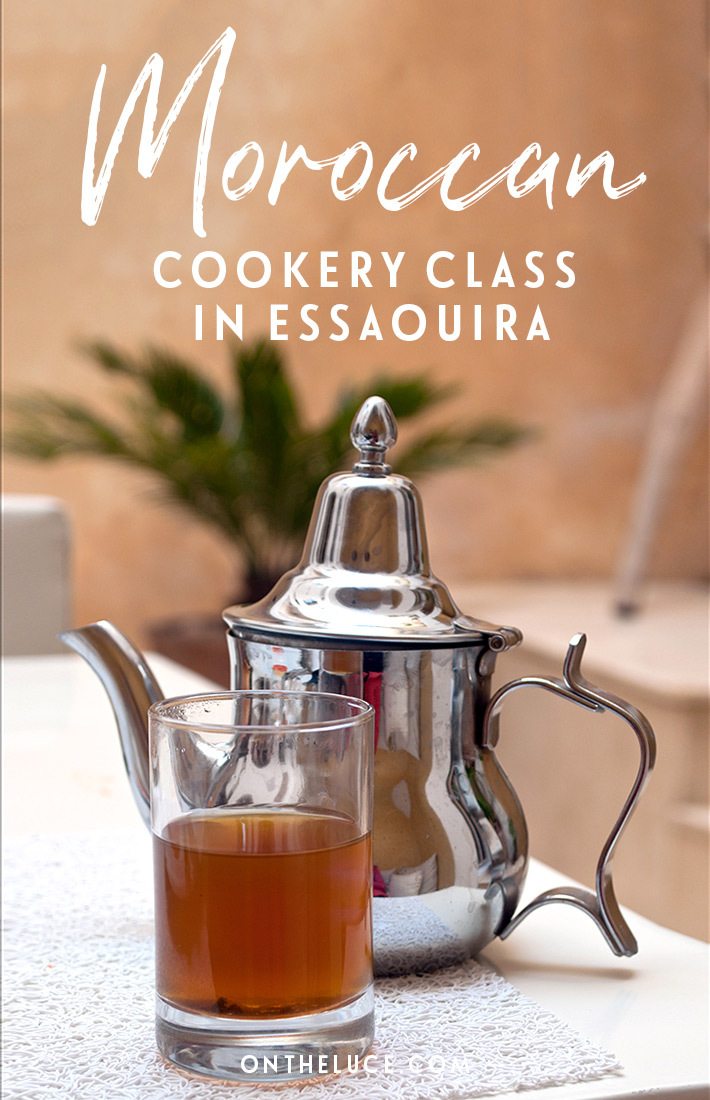 Ooo, I want to make briouats, they sound delicious! Think I'd have to get my little choppy machine out for the onions though: like a paste? my eyes would be streaming by then!

The briouats were a bit wasted on me because of the gluten but everyone else said they were lovely (and the filling without the pastry was very tasty!). Still make the tagine though – chef Mona said the onions get a bit bruised in a chopper but they still tasted ok to me and a lot less pain!

Taking cooking classes while traveling is one of my favorite activities! You can have a great time, learn so much, and often eat better stuff than at some restaurants.

Good job on the briouats! Your post makes me want to find a Moroccan restaurant in Chicago, there must be one...

I love cookery classes too, it's such a good way of bringing your travels home with you – we don't have a Moroccan restaurant close by so it's as close as I'll get!

I just returned from a cooking adventure in Morocco. The cooking class at L’Atelier Madada, Essaouira was a highlight! Thank you for writing about the experience in such an eloquent manner. I could not have expressed it better myself. I look forward to enjoying more from your blog in the future!

That's great – glad you enjoyed the article and the class, I've made my tagine at least once a week since I got back I loved it so much! Hope to get back there sometime and do another class.

That's it then, Lucy! I'm inviting myself for tea :) Have a happy weekend!

If you're ever in Cheltenham Jo, you're very welcome! Have a lovely weekend too.

Love tagines. One of my favorite cuisines in the world!

Mine too – they're usually so simple to cook back home too!