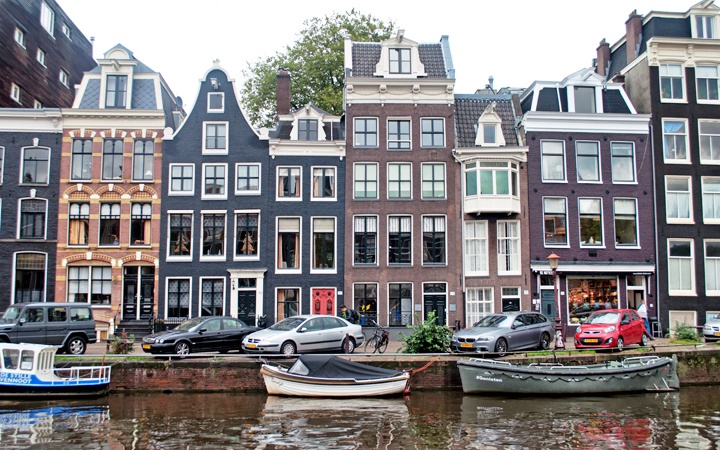 A city of 1500 bridges, 50km of canals and more bikes than people, Amsterdam is one of Europe’s most popular cities, attracting visitors from around the world. Along with its beautiful gabled houses and flower-decked watersides, there’s a huge amount of things to see and do in Amsterdam, whether your interests are Golden Age art or graffiti, high culture or getting high in a coffee shop. But this wealth of amazing experiences doesn’t have to come with a giant price tag attached to it. So here are my top tips for making the most of Amsterdam on a budget. 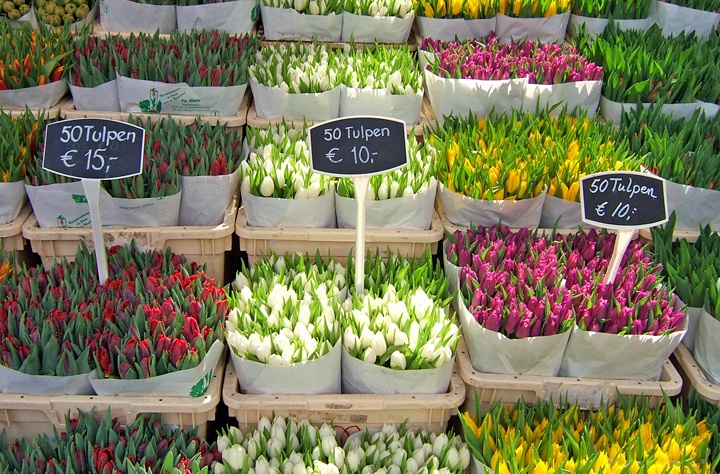 Tulips in the Bloemenmarkt flower market

Things to do in Amsterdam on a budget

Amsterdam is synonymous with its canals, and one of the best free things to do in the city is get out and get lost among them. The city is centred around the UNESCO-listed Canal Ring, where the three main canals – the Herengracht, Prinsengracht and Keizersgracht – form a horseshoe shape around the 17th-century historic heart of Amsterdam.

Beyond that there’s Jordaan, a former working-class area now full of galleries, restaurants and boutiques among some of the prettiest stretch of canal. Or hang out in the cafés of De Pijp, a district with a young, creative feel that’s is home to the Albert Cuypmarkt street market. You can also visit the Jewish Quarter for the Waterlooplein flea market, zoo and botanical gardens.

One of the most exciting ways to see the city is from the water on a canal cruise. You can save €4 by booking your canal cruise online in advance, which will also mean you’re guaranteed a place and can save on waiting time.

If you want a break from canals, the city also has some lovely parks – ranging from the huge Vondelpark (which hosts free events in its open-air theatre on weekends from May to September) to the peaceful Begijnhof, a pretty courtyard surrounded by 14th-century cottages. 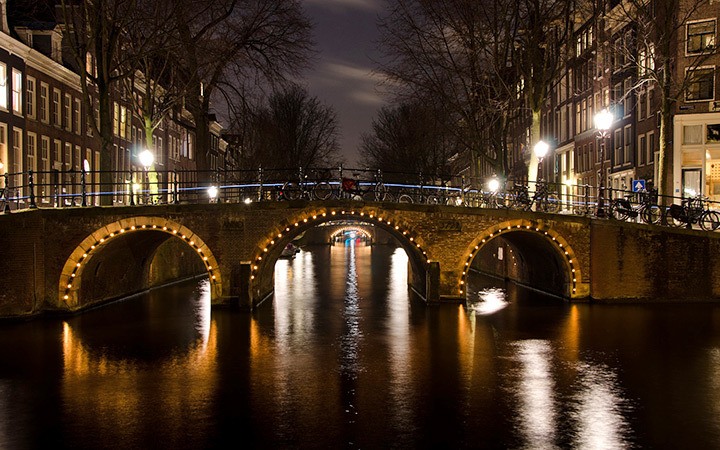 For classical music fans, there are free half-hour lunchtime concerts at the Concertegebouw concert house at 12.30pm on Wednesdays (mid-September to June). Some feature the full orchestra rehearsing and others have young musicians. There are also similar concerts on Tuesdays at 12.30pm (September to May) in the foyer of the Dutch National Opera and Ballet.

Or if you prefer jazz, the Bimhuis venue at the Muziekgebouw holds free Monday Match improvisational evenings at 8.30pm on the first Monday of the month and weekly Tuesday workshops at 8pm (where any musicians can join in) followed by a 10pm jam session. 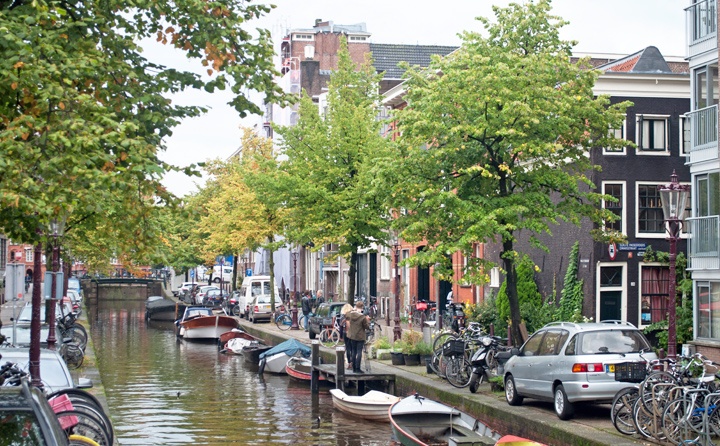 Along the canals in Jordaan

Entry to Amsterdam’s big-name museums – like the Rijksmuseum, Van Gogh Museum and Stedelijk modern art museum – costs around €19 per person (entry is free for under 18s). Though you can check out the sculpture gardens surrounding the Rijksmuseum for free.

You can book museum tickets online in advance, which won’t save you money but will help you skip the ticket queue. It’s an especially good idea at the Anne Frank House as you get a timed entry slot that lets you can bypass the long queues that often stretch right down the street (entry costs €10.50 for adults, €5.50 for children aged 10–17 and free for under 10s).

If you’re planning on visiting a lot of museums, there are a couple of discount cards available which can save you money. The Amsterdam City Pass costs €50.50 for adults (€14 for children aged 4–17) and includes skip-the-line access to the Rijksmuseum or the Van Gogh Museum, as well as a canal cruise, tickets for the airport train and discounts on tours and attractions. 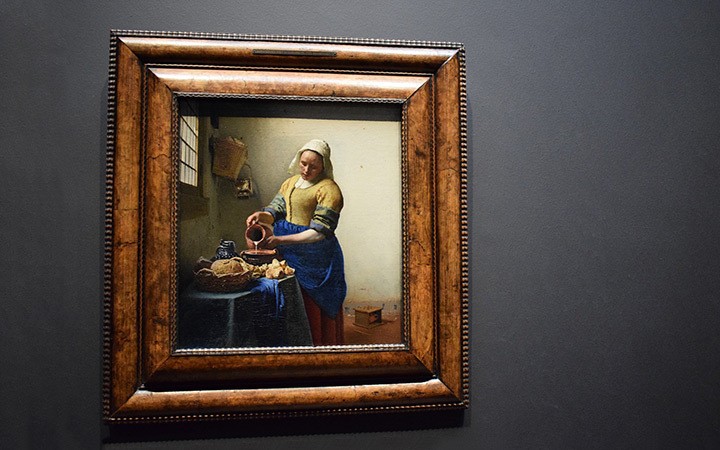 For a free taste of culture, head to the Schuttersgalerij or Civic Guards Gallery, where 15 Goldern Age paintings, similar in style to Rembrandt’s Night Watch, line a covered street near the Amsterdam Museum. In a modern building on the riverside, the EYE film museum has a free basement cinema and private viewing pods. It’s free to get there too on the Buiksloterweg ferry from behind Centraal Station. Other free museums include the City Archives, the Multatuli Museum and the Hollandsche Schouwburg (National Holocaust Memorial). 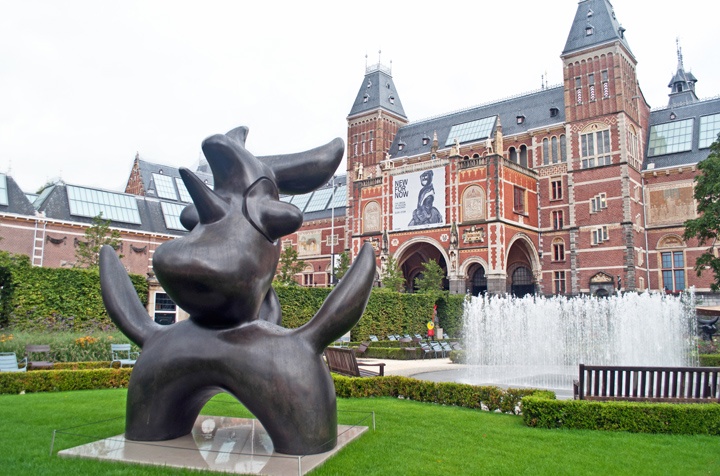 In the sculpture garden at the Rijksmuseum

The centre of Amsterdam is fairly low rise, so you won’t find any skyscrapers with views from up high. There are some good city viewpoints though, like from the top of the Openbare Bibliotheek (Public Library). It’s free to enter and there is a café and restaurant with an outdoor terrace.

You can also get a drink with a view from the 11th floor SkyLounge bar in the DoubleTree hotel on Oosterdokstraat (open 11am–1am, or 3am on Friday/Saturday nights). Or across the city there’s the Hotel Okura which has a cocktail bar on its 23rd floor that’s open to non-residents (open 6pm–1am, or 2am on Friday/Saturday). There’s also Cafe Blue on top of the Kalvertoren shopping centre, which has floor-to-ceiling windows and a 360 degree panoramic view. It’s normally open from 10am–6.30pm but stays open until 9pm on Thursday nights. 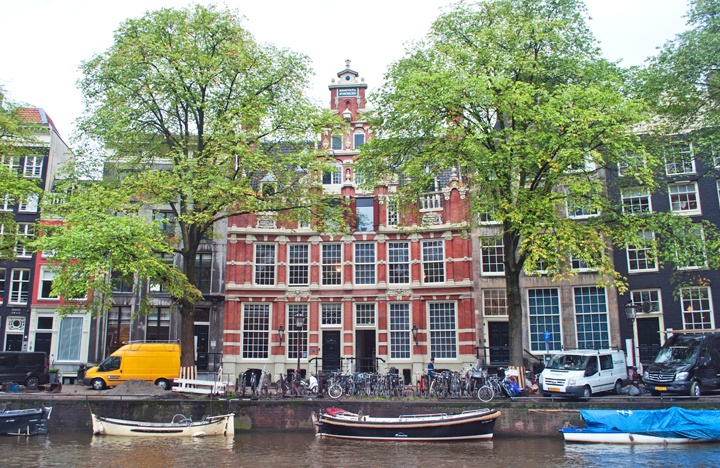 If you’re self-catering, look out for branches of the Dirk van den Broek, VOMAR, Lidl or Aldi supermarkets for discount groceries. You can also pick up fresh produce at Amsterdam’s food markets. There’s the Albert Cuyp Market in De Pijp (from Monday to Saturday, 9.30am–5pm) or the weekly farmer’s markets which are held on Saturdays at the Noordermarkt (9am–4pm), the Nieuwmarkt (9am–5pm) and the ZuiderMRKT (9.30am–5pm).

For a budget breakfast, head to the HEMA department store where they do a 9am–10am breakfast deal where you get a croissant, a bacon and egg baguette and a cup of tea or coffee for €2. And for a cheaper alternative to restaurants try an eetcafé, a kind of diner where they serve simple dishes at low prices. Or try some of Amsterdam’s street food – poffetjes (fluffy mini pancakes), stroopwafels (syrup waffles) or raw herring served with onions and pickles. There’s even a chain of fully automated 24-hour snack shops called FEBO.

Amsterdam’s most famous beer export is Heineken, and you can take a tour of the Heineken Experience visitors centre for €21 (€18 if you book in advance online). Or for €6.50 you can do you can do a 20-minute tour of the Brouwerij ‘t IJ craft brewery, located underneath the city’s tallest windmill. English tours run every Friday, Saturday and Sunday at 3.30pm and include a beer of your choice. For something a bit stronger, at the Wynand Fockink jenever distillery and bar you can taste their liqueurs before you buy (open 2pm-9pm daily). 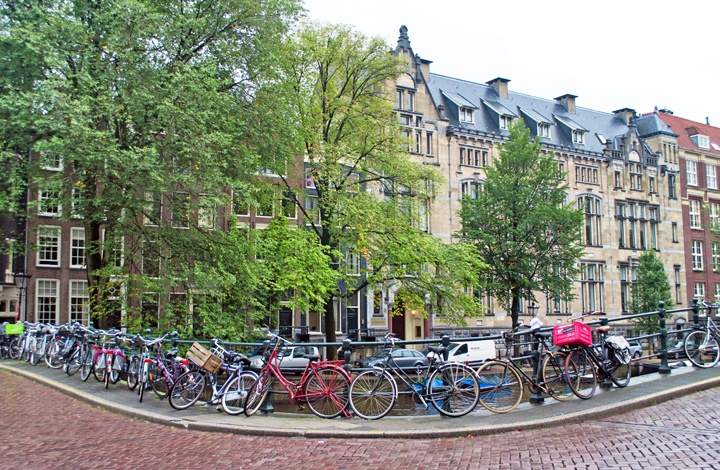 A few of Amsterdam’s many bikes

Amsterdam is a really walkable city, and you can pick up a map from the tourist office for €2.50. Or join the locals and get on your bike – somehow there are more bikes than people in Amsterdam. One of the cheapest places to hire a bike is from ClicknBike, where they cost €9.99 for one day, €24,99 for three days or €54,99 for a week. You can also get a 25% discount on rentals from MacBike and Amsterbike if you have an I Amsterdam card.

If you’re planning on using the trams or buses a lot, it’s worth investing in a public transport pass. There are a couple of different options. GVB passes give you unlimited travel on trams, buses and the metro and are available for 2 days (€13.50), 3 days (€19) or 4 days (€24.50). Or there’s the Amsterdam Travel Ticket which includes train travel to and from Schipol Airport as well as unlimited public transport within the city (1-day €17, 2-day €22.50, 3-day €28).

You can also take a free boat trip across the IJ, the stretch of water behind Centraal Station, to NDSM Wharf in Amsterdam Noord, a derelict shipyard turned creative community with galleries, sculptures and waterside bars and cafés. 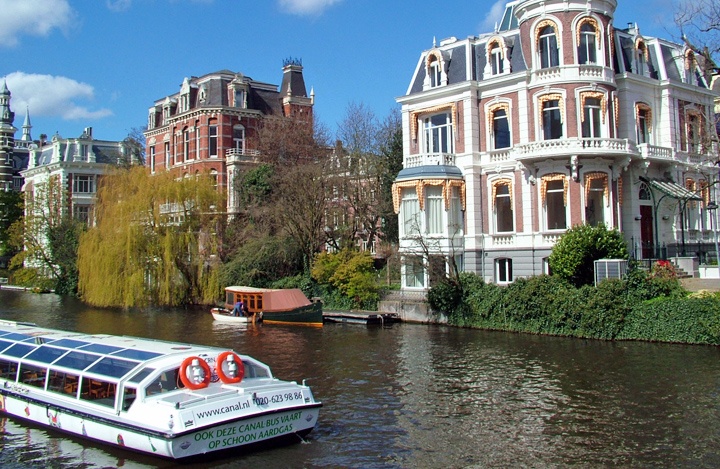 So those are my tips for seeing Amsterdam on a budget – do you know of any more Amsterdam bargains or have any money-saving tips?

Looking for somewhere to stay in Amsterdam? 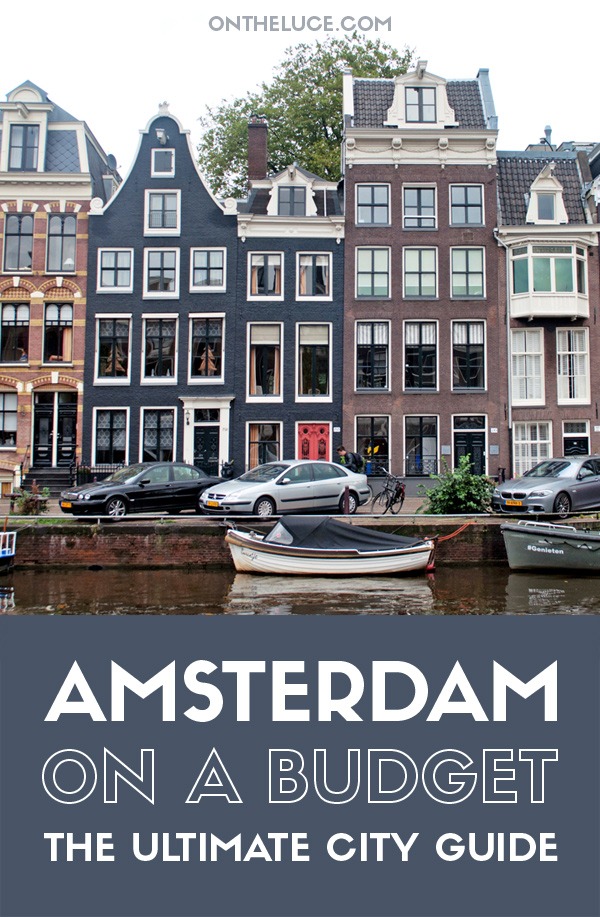 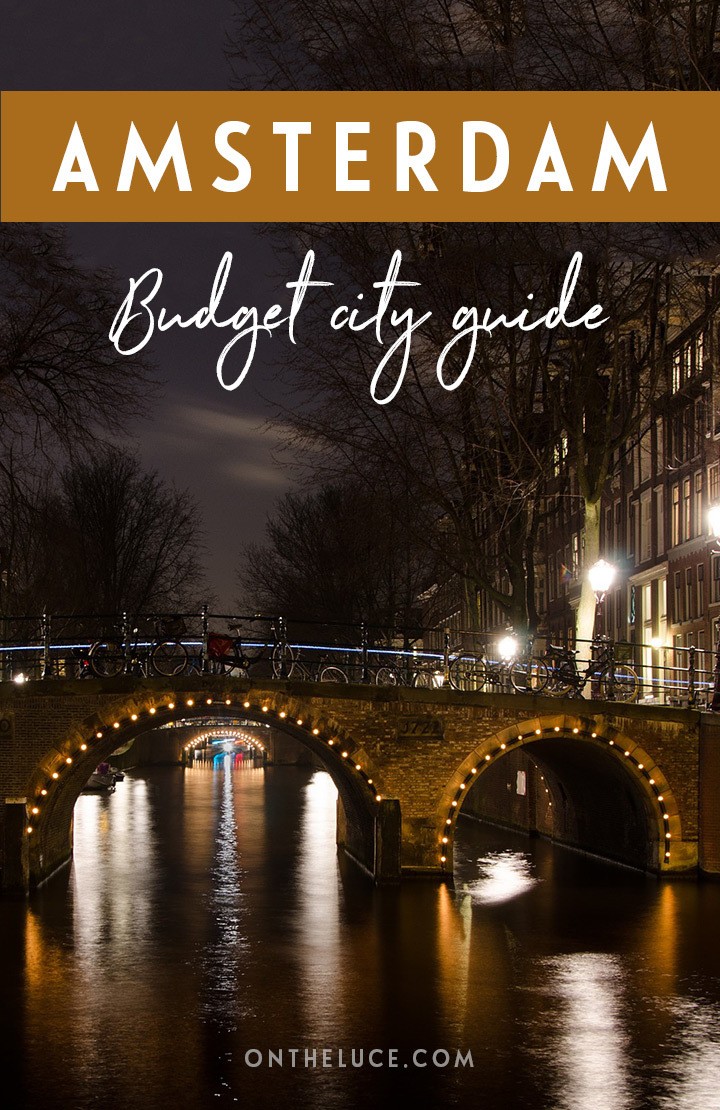 Can you suggest a budget friendly hotel for family?

Hi, I mostly stay in apartments but check out the Qbic and EasyHotel chains as they have some good-value accommodation.

Hi Lucy! Thanks for sharing your experience about the city of grand canals. The fashionable Jordan, stylish restaurants, and boutiques are indeed exotic. Spending time on its historic waterways and pick up a bicycle finding the numerous bike paths on Amsterdam is a memorable experience. Your blog will be of a great help for first time travelers.

Thank you so much! you inspire me!

Great article! I lived in Amsterdam for 6 years and loved it - it's the perfect size of city to explore on a short trip too :-) . Did you make it out to Haarlem? That's one of my favourite smaller towns to visit from Amsterdam (just 15 minutes away on the train) and a bit more chilled than central Amsterdam itself :-).

I've not been to Haarlem yet but it looks lovely – one for next time definitely!

Great article, thanks for the tips! A dynamic and vibrant cosmopolis, Amsterdam has much to offer.

Thanks, yes it's a fascinating place!