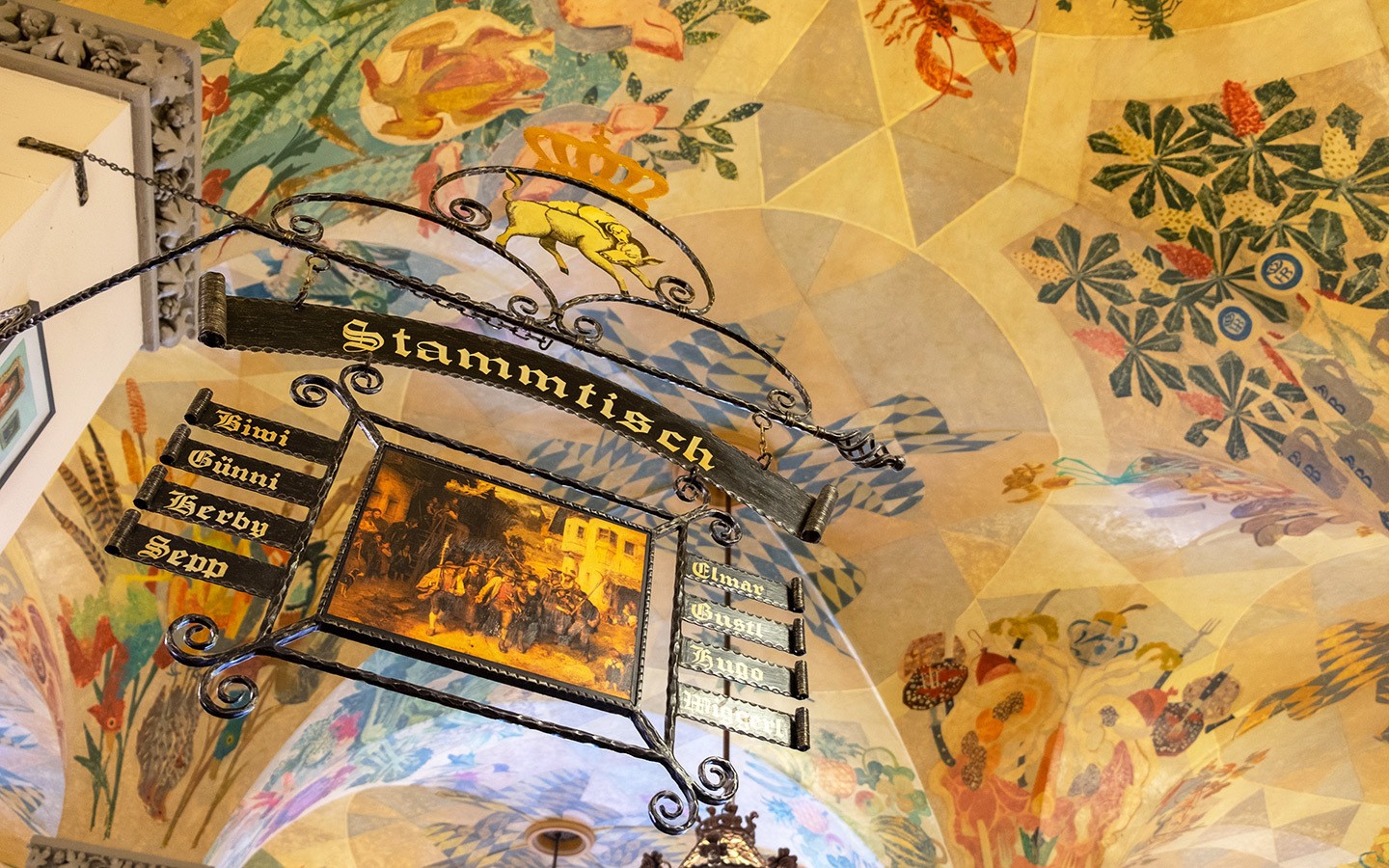 From lavish palaces and world-class art museums to lederhosen and oompah bands, Munich’s unique mix of history, culture and plenty of beer make it a great place for a city break. Germany’s southern capital is the heartland of Bavarian culture. Come in the summer for the beer gardens, autumn for Oktoberfest, winter for the Christmas markets or spring for flower-filled parks. There’s never a bad time for a trip to Munich – and it doesn’t have to cost a fortune to visit either. Here are my top tips for making the most of Munich on a budget.

Read more: How to spend a weekend in Munich – in the sun or rain 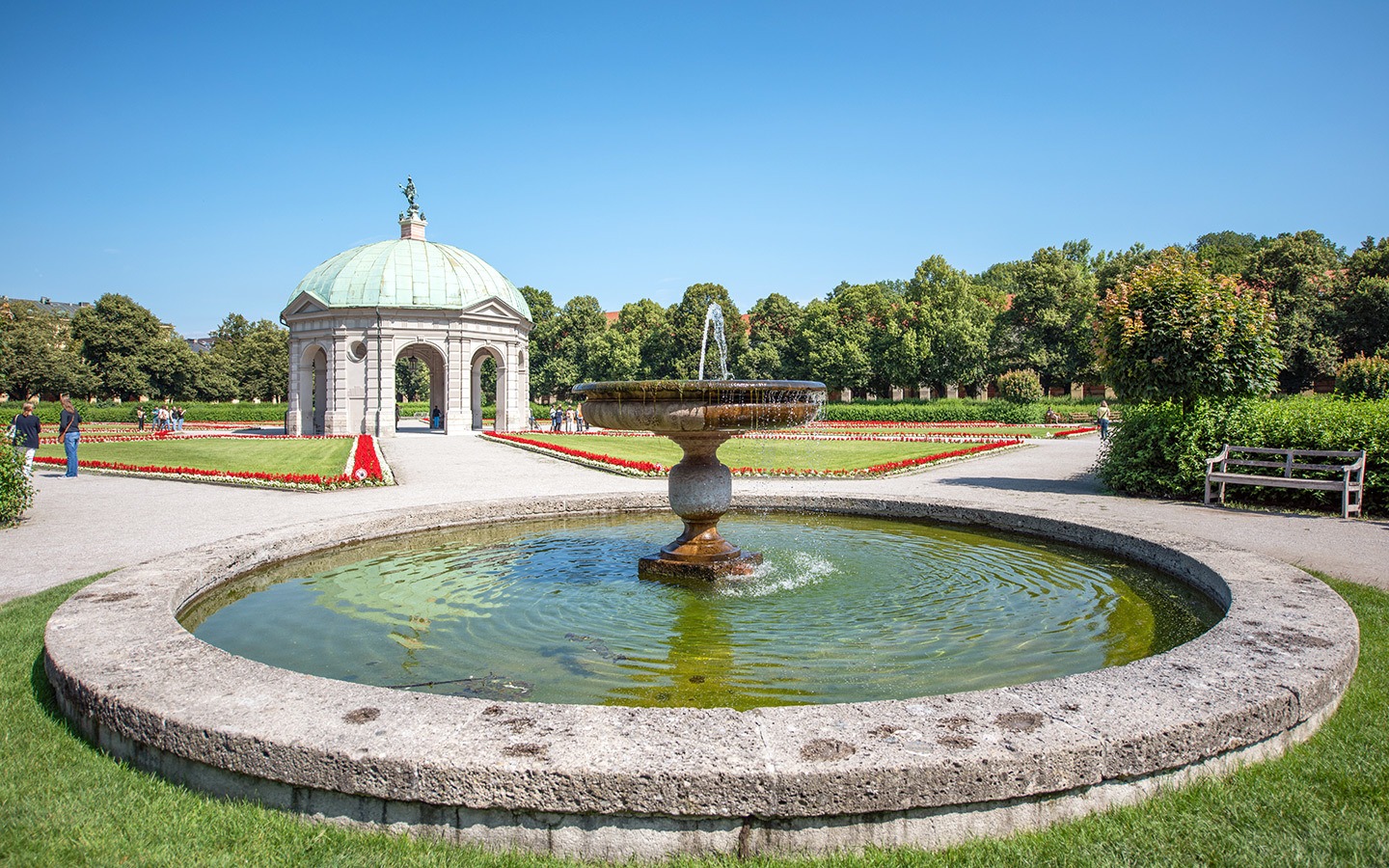 Things to do in Munich on a budget

A free walking tour is a great way to get your bearings in a new city – especially one as big as Munich. Sandemans New Europe run a free 3-hour guided tour through the city’s history and highlights where you just tip your guide. Tours start from Mary’s Column in Marienplatz and run at 10am, 10.45am, 2pm and 4pm each day. Or if you want to do it yourself, guidebook author Rick Steves has a self-guided Munich tour you can download or use on his Audio Europe app.

Head to Marienplatz at the heart of Munich’s old town at 11am or midday (as well as 5pm in summer) and you can see the Glockenspiel at the Rathaus in action. Munich’s most famous clock puts on a 15-minute show with scenes from Bavarian history, using 43 bells and 32 life-sized figures. Other free places to visit in Munich include the courtyards at the Residenz, the twin-towered Frauenkirche, lavishly decorated Asamkirch and Italianate Theaterinerkirche. 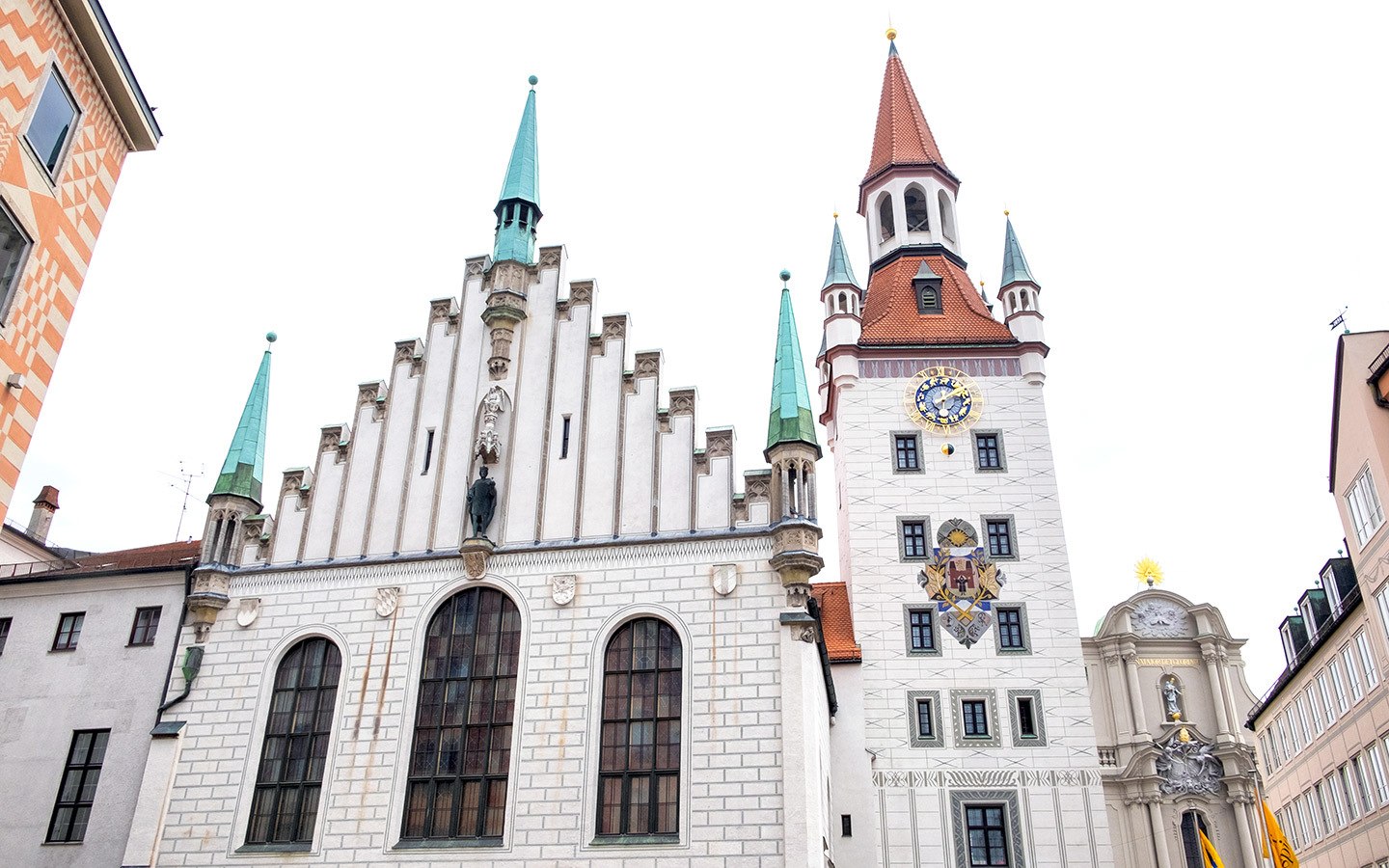 If you’re a classical music lover, you can see free concerts at the Gasteig cultural centre. It’s home to the University of Music and Performing Arts, and young musicians studying there perform in midday and early evening concerts. There’s a mix of instruments, voices and musical styles, ranging from jazz to church music – you’ll find the latest event listings on their website.

For something more classically German, you can see traditional oompah bands playing at beer halls and beer gardens around the city, including the Hofbräuhaus and the Chinesischer Turm in the English Garden. There’s also plenty of traditional music on during Oktoberfest (if you’re planning a visit, here’s how to dress for the occasion). The beer might not be free but entry to the festival is, with a huge parade in traditional Bavarian dress on the first Sunday.

Munich is a surprisingly green city with plenty of parks to unwind in. Biggest and best-known is the Englischer Garten – or English Garden. It was built in 1789 and is one of the world’s largest city parks. It’s inspired by classic English gardens with lawns, lakes, streams and pavilions. Admire the view from the Greek-style Monopteros, drink a stein at the Chinese pagoda, and watch the surfers on the Eisbach river, where a concrete break provides constant waves.

There’s also the Olympiapark just outside the city centre. The park was built for the Olympic Games in 1972 and is now a big green space that’s the perfect spot for a summer picnic. In August there are free concerts by the lake – or you can often eavesdrop on the big names playing concerts at the Olympic Stadium. And although you need to pay to look around the Nymphenburg Palace, entry to the palace’s impressive formal gardens is free. 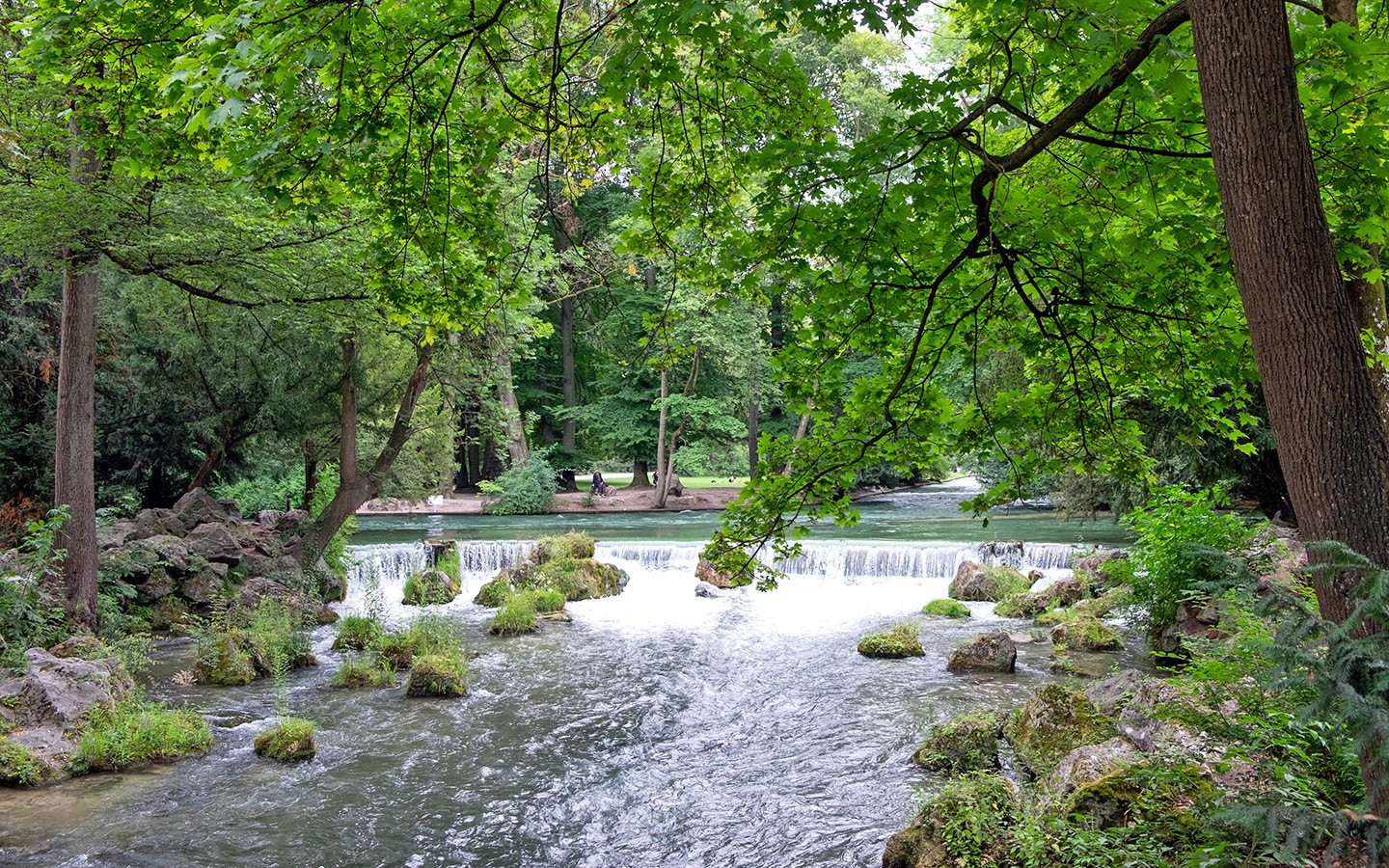 Going green in the English Garden

If you want to visit Munich’s museums, many offer €1 entry on Sundays. They include the three Pinakothek art galleries – covering Old Masters, 18th- and 19th-century European art, and contemporary art and design – as well as the Glyptothek sculpture museum, State Museum of Egyptian Art, Five Continents ethnographic museum, Bavarian National Museum, Brandhorst Museum and Museum of Humankind and Nature. Plus the Geologisches Museum and Kartoffelmuseum (aka the potato museum) are free to visit all the time.

Munich is the base for motor company BMW, whose headquarters are near the Olympiapark. If you’re a car fan, they have a museum about automobile history which you have to pay to go into. But there’s also the BMW Welt in an eye-catching modern building opposite which is free to enter (or €7 for a guided tour). It’s a giant car showroom dedicated to everything BMW, Rolls Royce and Mini, with classic, current and concept cars on display. 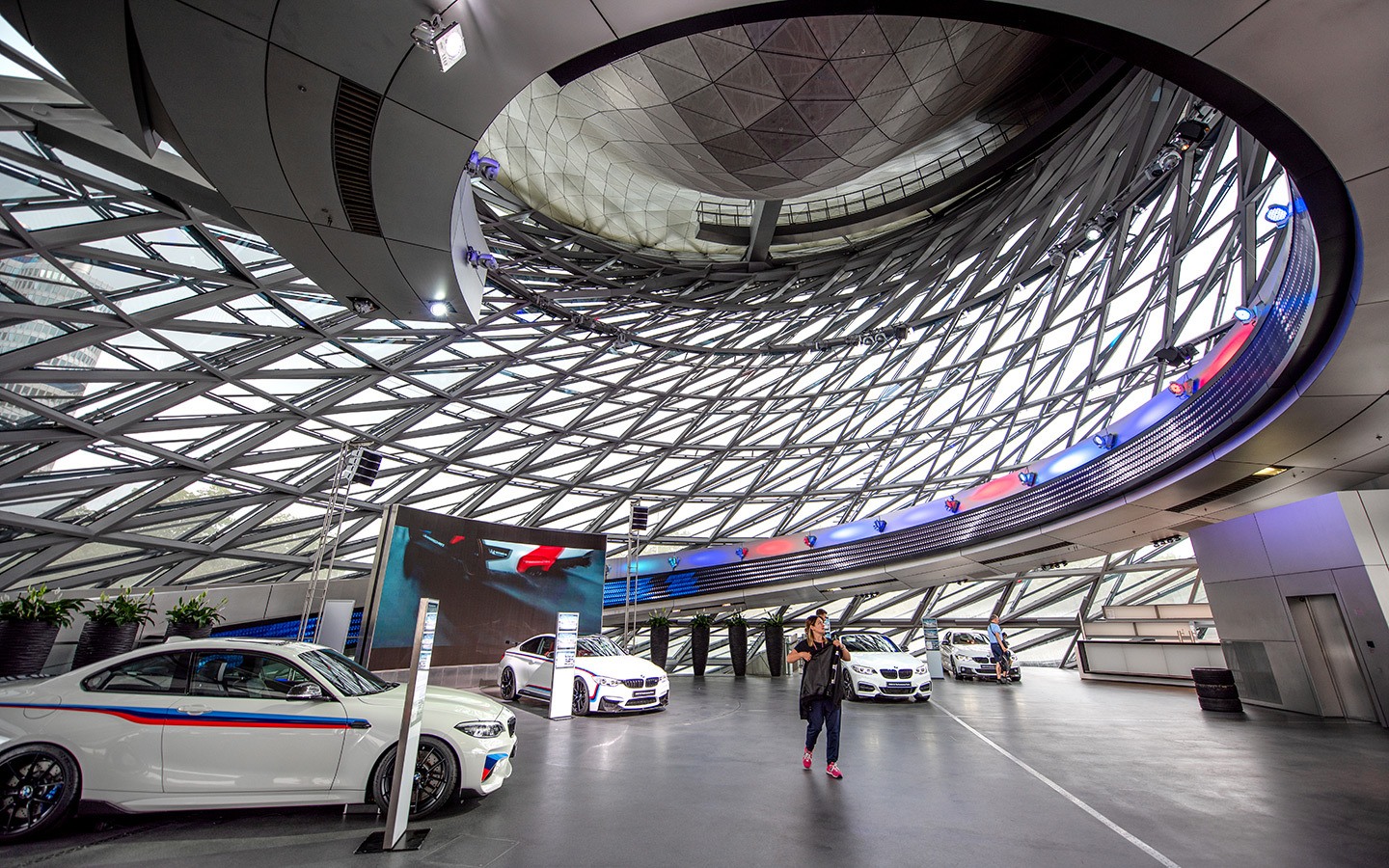 If you’re planning to visit a lot of Munich’s attractions, you might want to get a city pass. There are two different versions – the Munich Card and the Munich City Pass. Both include unlimited public transport, either for the inner district or the whole network (including travel to the airport). There are different versions for individuals and groups, and they cover 1–6 days. 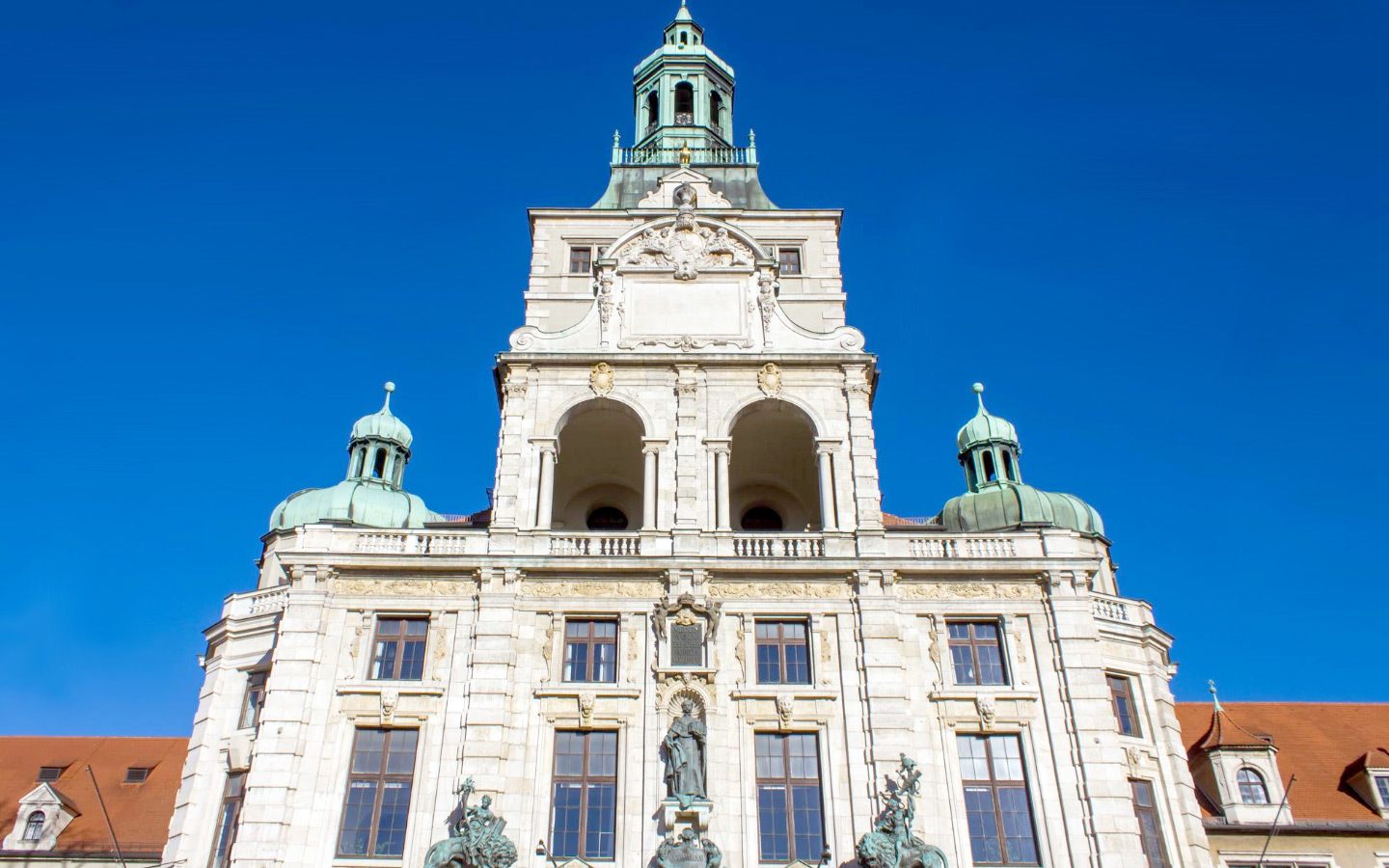 For one of the best views in Munich, climb up to the top of the St Peter’s Church in Marienplatz, Munich’s oldest church. From the viewing platform at 56 metres high you can look down at the square and the ornate New Town Hall, and out across the city. On a clear day you can even see as far as the Alps. Entry costs €2 per person with 300 steep, narrow steps to the top.

If that’s not high enough, get a bird’s eye view of Munich from 291 metres at the top of the Olympia Tower in the Olympiapark. It’s the city’s highest point, with a viewing platform (entry €9 or €6 concessions) as well as a museum of rock memorabilia. There’s also the swanky rotating Restaurant 181, which does a circuit every hour so you see the city from all angles.

For more budget-friendly dining with a view, try TUM café in Vorhoelzer Forum, a café with rooftop terrace in the city’s university district. Or for a viewpoint with a difference, climb inside The Bavaria. This bronze statue of a stately Bavarian lady overlooks the Oktoberfest festival grounds. She’s just over 18 metres high and hides a secret spiral staircase inside which you can climb up and peek out of holes in her helmet. Entry costs €3 per person. 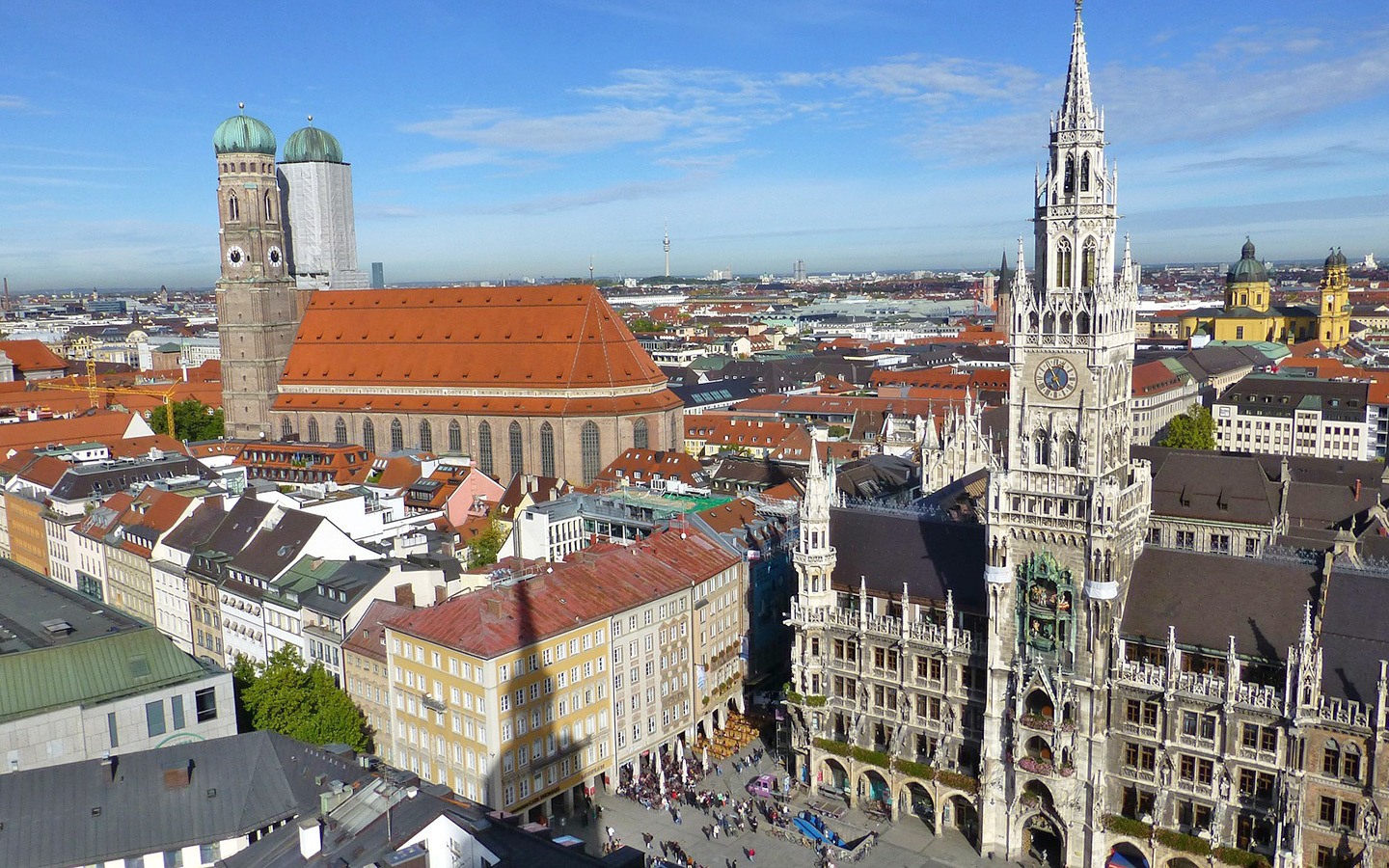 Traditional Bavarian food is hearty and rich. If you’re eating out in Munich, it’s much better value to have lunch out instead of dinner. Look out for special lunchtime set menus with a starter, main course, dessert and a drink for a fixed low price. Head to the university district for inexpensive restaurants. Or pick up a classic Munich beer garden or street food snack for a few euros – like pretzels, currywurst, weisswurst (white sausages) and döner kebabs.

Or if you’re self-catering, Munich has some good food markets. The Viktualienmarkt is the biggest with 140 stalls selling local produce, like bread, honey, fruit and vegetables. It’s close to Marienplatz so makes a good spot for lunch – and there’s a beer garden too. The Viktualienmarkt is open daily except Sundays. There’s also the Elisabethmarkt in Schwabing, which is open from 10am–6pm on Mondays to Fridays and 10am–3pm on Saturdays. 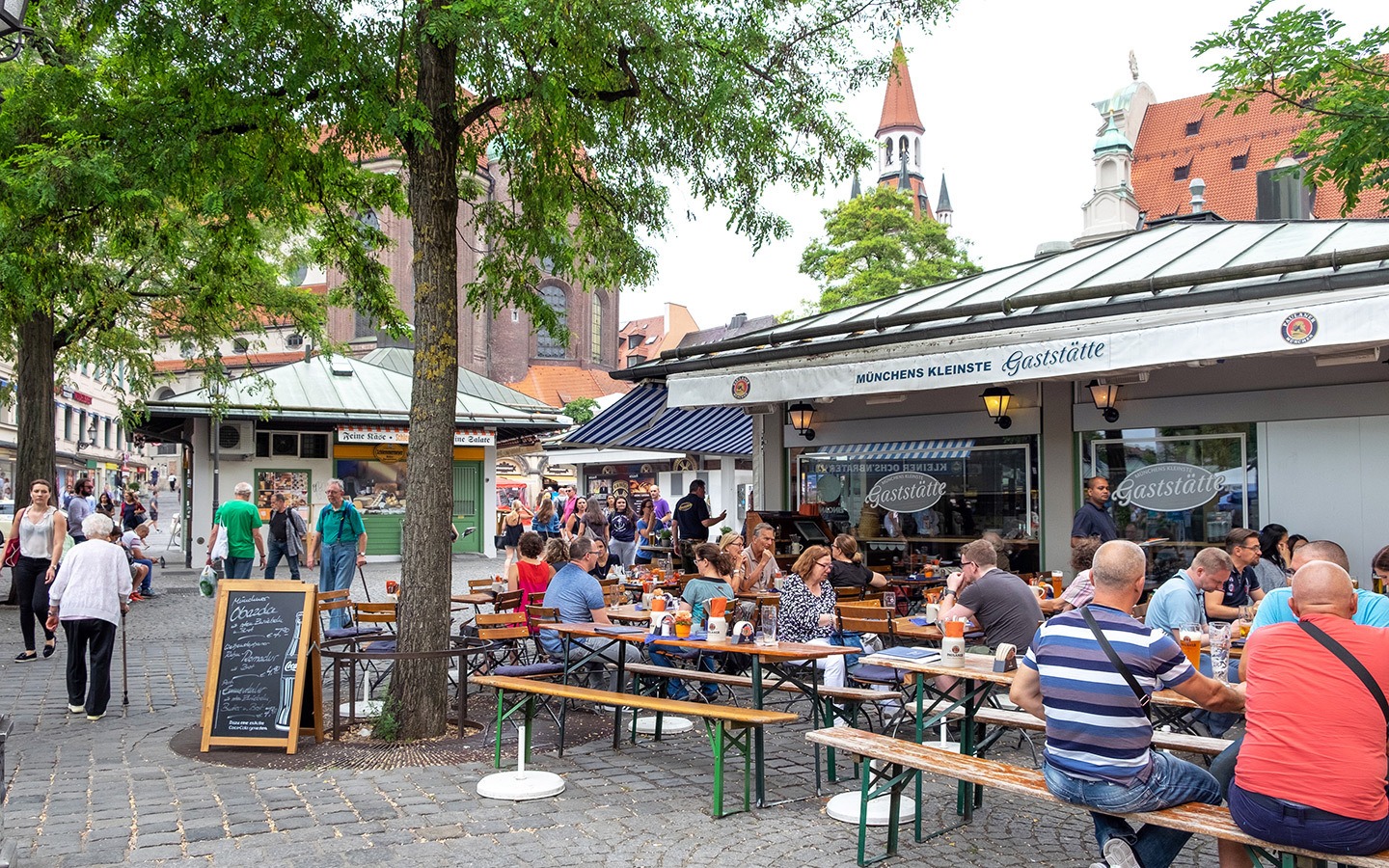 If you need to stock up on basics like milk and bread, look out for city supermarket chains Rewe, Edeka and Lidl. Or if it’s late at night or on a Sunday, head to the Hauptbahnhof (main station) as the supermarket there is open longer than most of the city centre branches.

Munich has beer-drinking opportunities for every season – beer gardens in summer and beer halls in winter. The famous Hofbräuhaus is the most touristy and expensive, but you can find cheaper beer if you go to somewhere more local. Try the Hirschgarten beer garden or the Paulaner and Augustiner Bräustuben beer halls. And if you’ve got some time spare before you fly home, call in at the Airbrau at Munich Airport. It’s the only airport in the world which has its own an on-site brewery and beer garden, with their beers costing a bargain €2.75. 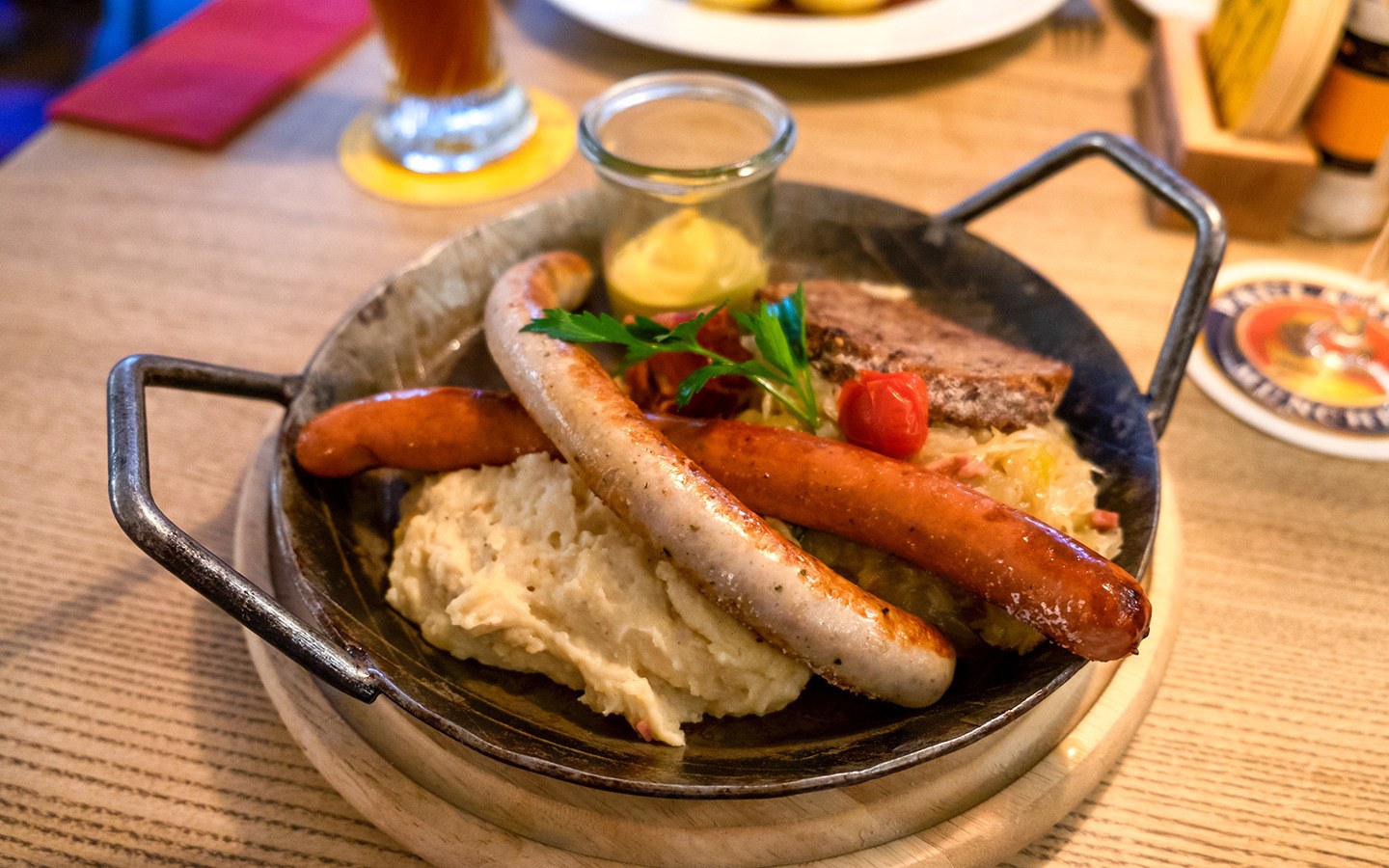 Munich is pretty spread out, but it’s easy to get around the city using the S-Bahn (city) and U-Bahn (underground) trains. Tickets cost €3.30 for a single journey, but it’s better value to get a day ticket at €7.80 for the inner zone. You can also get a group day ticket for €14.80, which covers up to five people, but saves you money even if there’s just two of you. You can buy tickets in stations you can also get them using the MVG app (available in English).

For a free city tour, take tram 19 at Hauptbahnhof Süd to St Veit-Straße past some of Munich’s top sights. If you’re staying in the city a while, you can get a weekly IsarCard – the cost is based on how many ‘rings’ on the map you use. For the central zone (two rings) it costs €15.40 per person. The Munich Pass and Munich City Card also include unlimited public transport.

Munich’s airport is around 35km outside the city. You can get to and from the airport using the S8 and (slightly slower) S1 trains. A single ticket to or from the airport costs €11.60 per person, but it’s only €13 for a day pass or €24.30 for a group day pass. 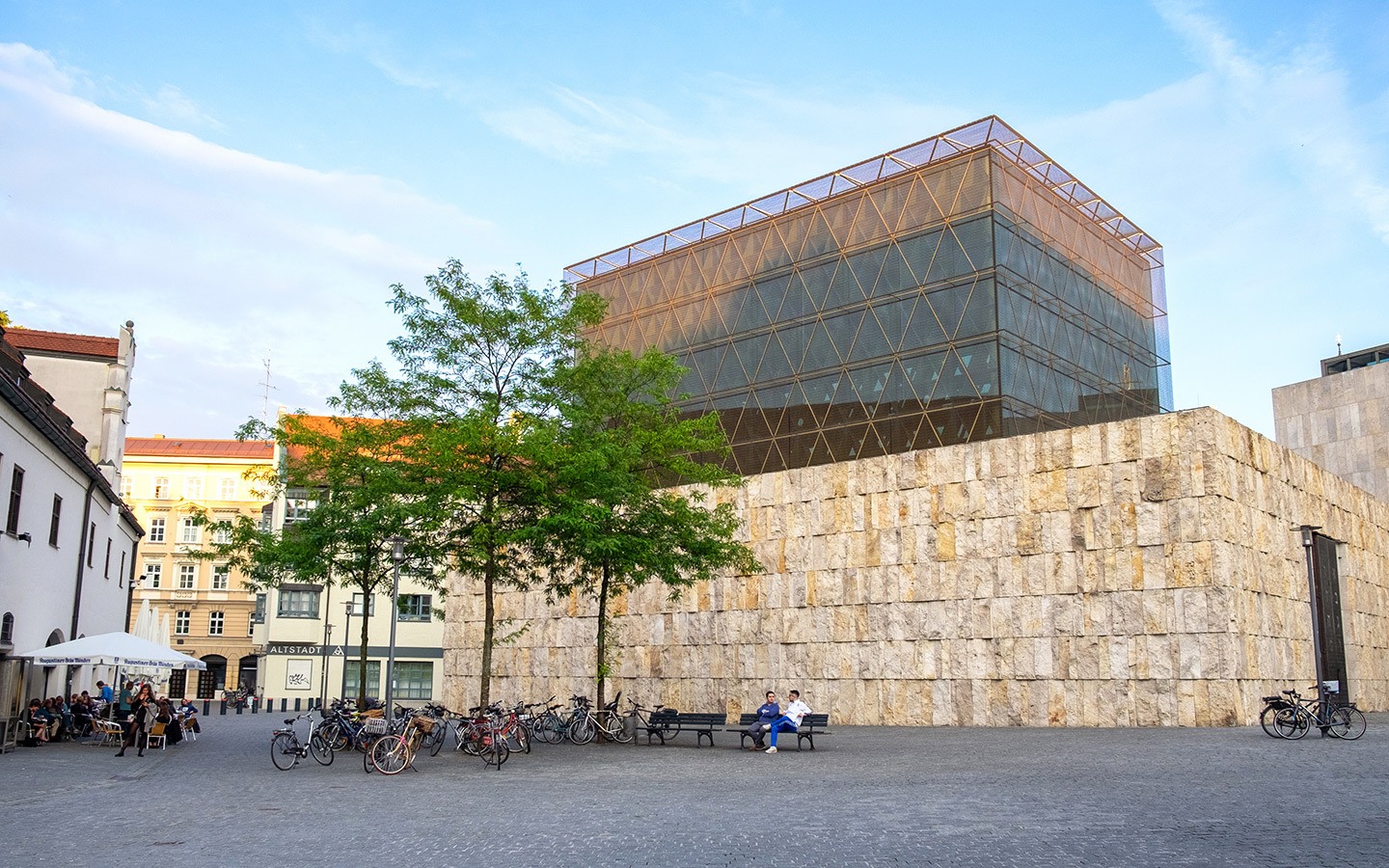 So those are my tips for seeing Munich on a budget – do you know of any more Munich bargains or have any money-saving tips?

Looking for somewhere to stay in Munich? 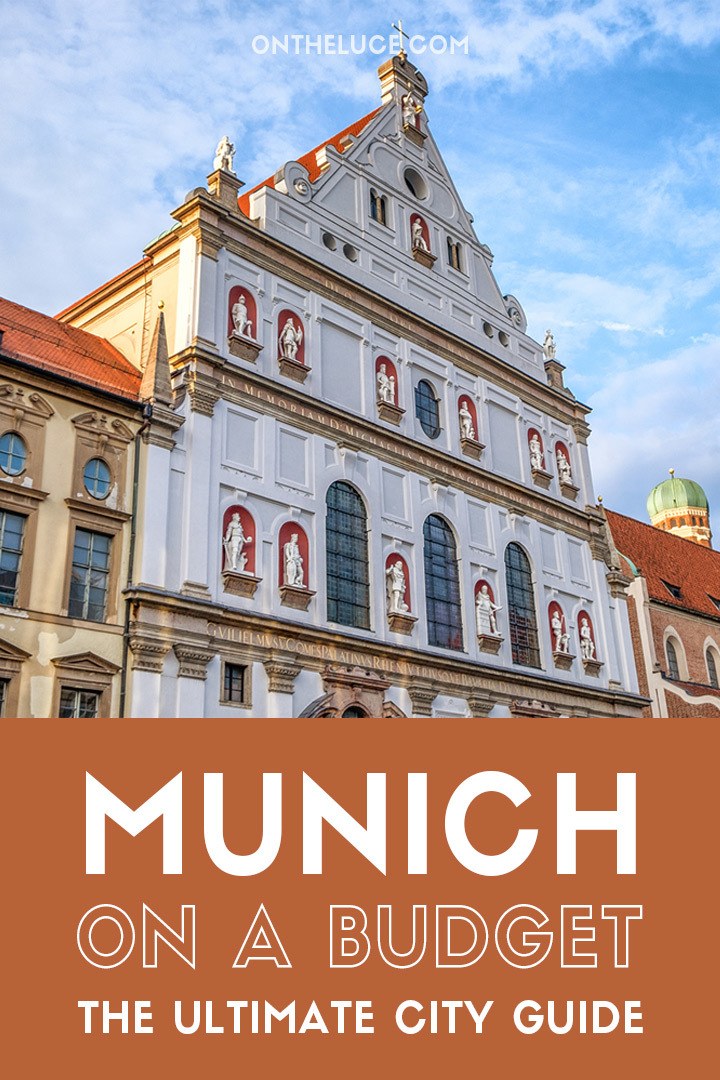 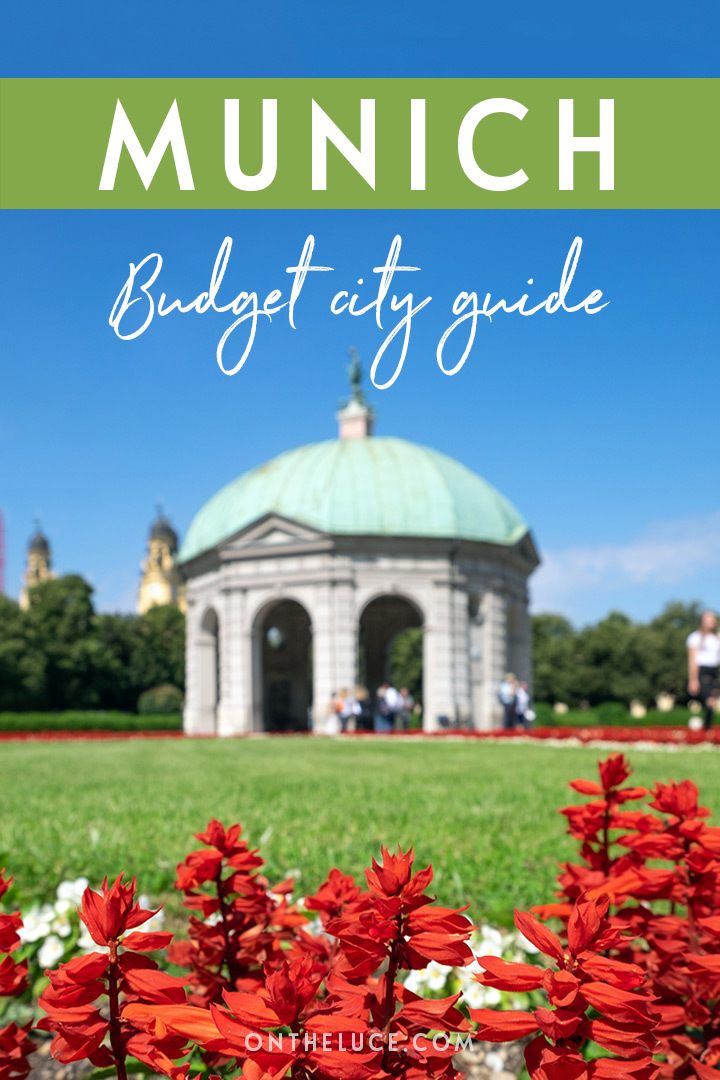 Great beer, food markets and stunning architecture old and new. My kind of town! I'd love to visit one day.

It was lovely in summer but I hear winter is a great time to visit too!

I've been hearing lots of good things about Munich for years - mainly from people who come from that region. And reading your post makes me sure that I'd absolutely love it - not least the quirky potato museum!

You can't beat a random museum!

Seems like such a beautiful city. One with character, too. I'd love to go one day but if I can't then I feel like I know enough after reading this article haha!

Hope you get to make it out there someday!

thanks for the tips, saving it for future:)

Hope it comes in handy!

Oooh I want to head back to Munich now, looks like there's a few things I missed out on! What I loved most when I was there was the amount of green spaces they have, lovely for a picnic. Olympiapark is filled with little ponds and stuff that are so cute. Nice post!

It is so green isn't it!