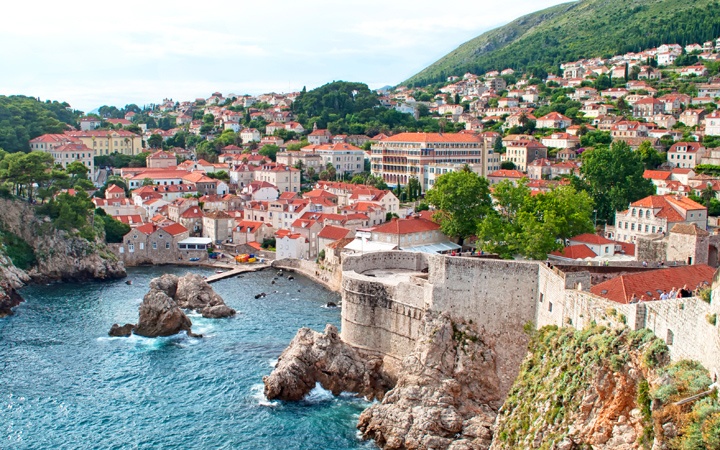 Conventional cruise wisdom has it that when you get into port, you should be first off the ship to get as much time as you can in each destination. Great in theory, but it didn’t take into account that our arrival into Dubrovnik would coincide with a torrential rainstorm – and an umbrella shortage. So, feeling just a little bit guilty, we hung out in the jacuzzi first while else trudged around in the rain. It turned out to be a good choice though as an hour later the sun was shining, raincoats were swapped for sunglasses, and Dubrovnik looked like a whole different place.

The city has attracted more than its share of superlatives over the years – it’s known as the ‘Pearl of the Adriatic’ and according to playwright George Bernard Shaw “Those who seek paradise on earth should come to Dubrovnik”. Big words – but Dubrovnik lived up to the high expectations and we couldn’t help being charmed by our taste of the city. 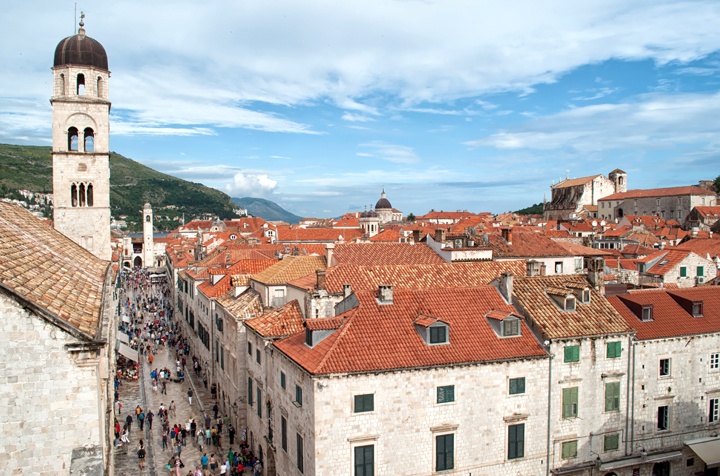 The old town of Dubrovnik

Entering the city through the Pile Gate, there might be a lot more visitors and gift shops than a few centuries ago but there’s still the feeling that not too much else has changed. The old city is pedestrianised, so you don’t have to worry about traffic as you wander through the marble-paved streets – probably a good thing as it’s hard to keep your eyes on the road when there are so many beautiful buildings around. Central Dubrovnik is a jumbled mixture of Gothic and Renaissance churches, Venetian palazzos and carved fountains, mixed in with terrace restaurants and a growing array of smart boutiques and hotels. 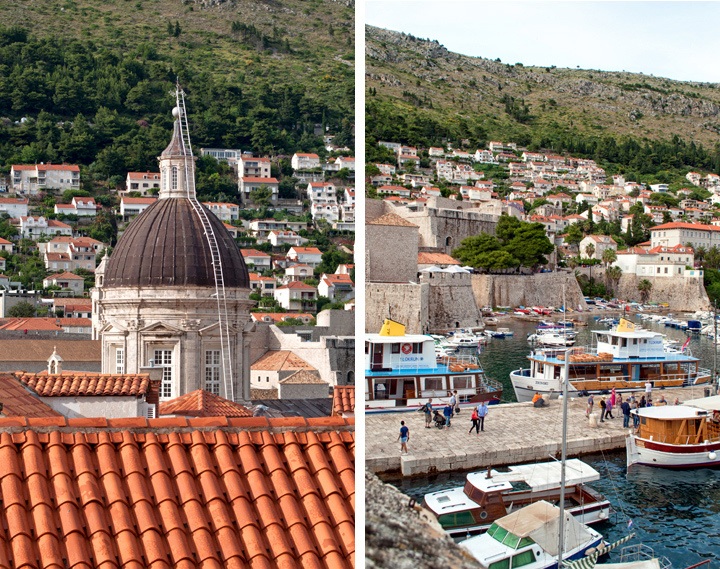 Dizzying steps up to a church spire and Dubrovnik’s harbour

But one of the best things to do in Dubrovnik is to get up high above the city onto its walls. The whole of the old city is encircled by 1.2 miles of thick stone walls which reach up to 25 metres high and six metres wide in places and have been protecting the city for centuries – whether that’s from invaders or earthquakes. The first city walls were built in the 11th century but the shape you see today dates back to the 14th century when Dubrovnik gained independence from Venice. As well as the walls there are four gates to let people in and out – two by land and two by sea – and four fortresses to protect the most vulnerable points. 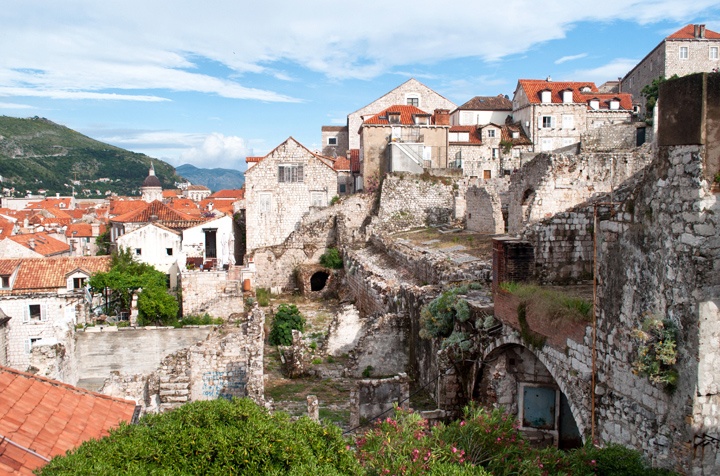 Ruined buildings lining the edge of the walls

Despite more than its fair share of attacks over the years, the walls protected Dubrovnik for centuries without ever being breached. But one thing that has left its mark on them is a more recent conflict – the Balkan Wars. The city was subject to major bombing during the 1990s, though it’s hard to spot it now. The only clues you have are the pockmarks left on some buildings and a few roofs which have been restored, with their bright orange newer roof tiles standing out against the more weathered originals. 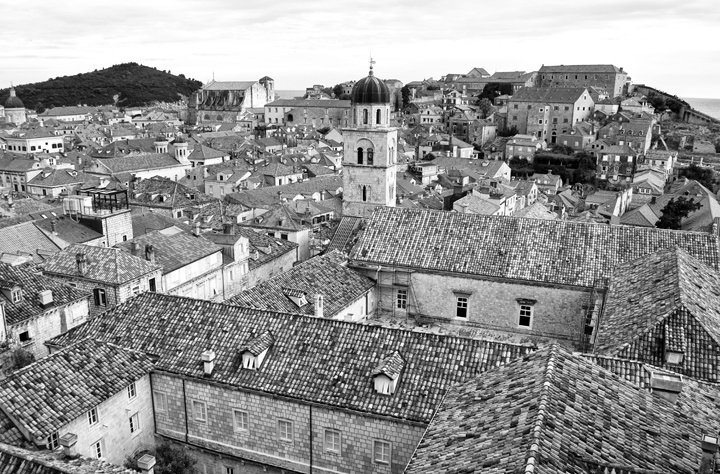 Our route around the walls started near the Pile Gate and headed up a steep flight of stairs to the top of the walls. From up there you get a much better idea of Dubrovnik’s layout – as well as some pretty fantastic views of the city and the Adriatic Sea. The width and height of the walls varies as you walk around – getting as narrow as a metre wide in some areas and with dizzying views down into the narrow streets below. 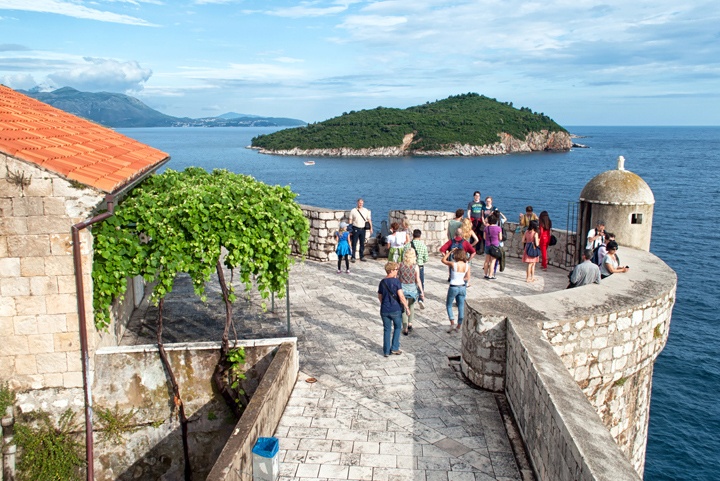 The island of Lokrum as seen from the walls

Walking the walls also gives you a bird’s-eye view right into the homes and gardens of the city’s residents. You get little snapshots of their everyday life as you pass – hanging out washing from their windows, drinking coffee in the garden, stretched out on the rocks catching some sun. Though you can’t help wondering what they make of having a procession of tourists wandering past every day, and whether they resent having to close their shutters to escape the constant eyes and camera lenses. 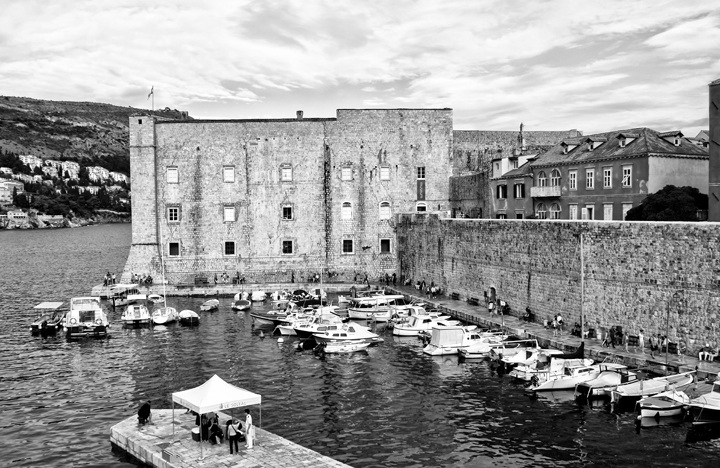 Looking back over the old port to St John’s fortress

The hazy afternoon sunshine was just about perfect for walking the walls – in the height of summer the sun beating down from above and the heat from the stone below can make it a hard slog. Around halfway round there is a bar built into one of the fortresses where you can grab a water or a fresh orange juice. But we held out until the end – I’d been tipped off about Buža bar which we spotted en route, and a seat under the umbrellas right on the waterfront looked hard to beat. But first we had earn that drink. 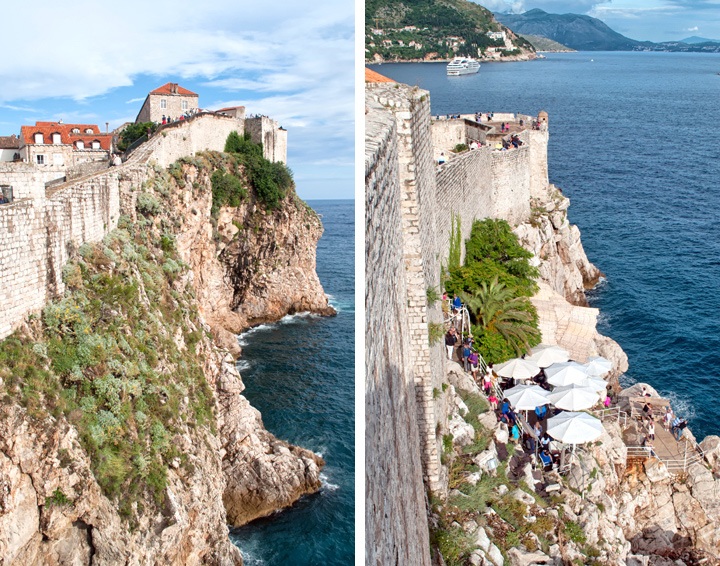 The city walls climb uphill – and looking down on Buža bar

The final stretch of the walls took us on a climb up yet more steps – somehow we seemed to go up twice as many as we went down – towards the highest point of the walls at the Minčeta Tower. From the top the buildings way below looked like a patchwork quilt, with rooftops making up the different patches. Church domes and bell towers poked up through the sea of red roofs, with the deep green forests of Lokrum island in the background. Then after an hour’s worth of walking and snapping away we headed downhill back onto the city streets, having got a better perspective on the city in more ways than one. 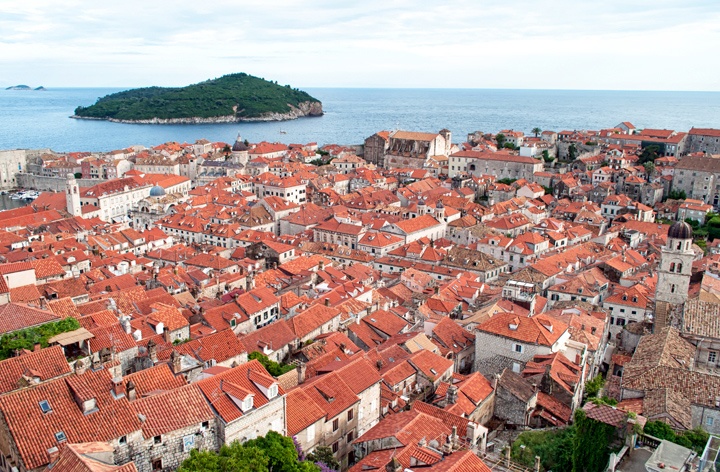 Dubrovnik’s city walls are open 8am–7.30pm during June and July; 8am–6.30pm during April, May, August and September; 8am–5.30pm during October; and 9am–3pm for the rest of the year. Admission costs 120 kn per person (about £13). It’s a good idea to get there early or late in the day to beat the worst of the crowds – and the summer heat – and to bring water with you as there’s not much shade up there. There are entrances to the walls by the Pile Gate and Ploče Gate – start at the Ploče Gate to get the worst of the climbing done first, or at the Pile Gate to build up to the best views from the highest point right at the end. Either way you have to follow an anticlockwise route around the walls.

Book your travel to Dubrovnik with Bookaway 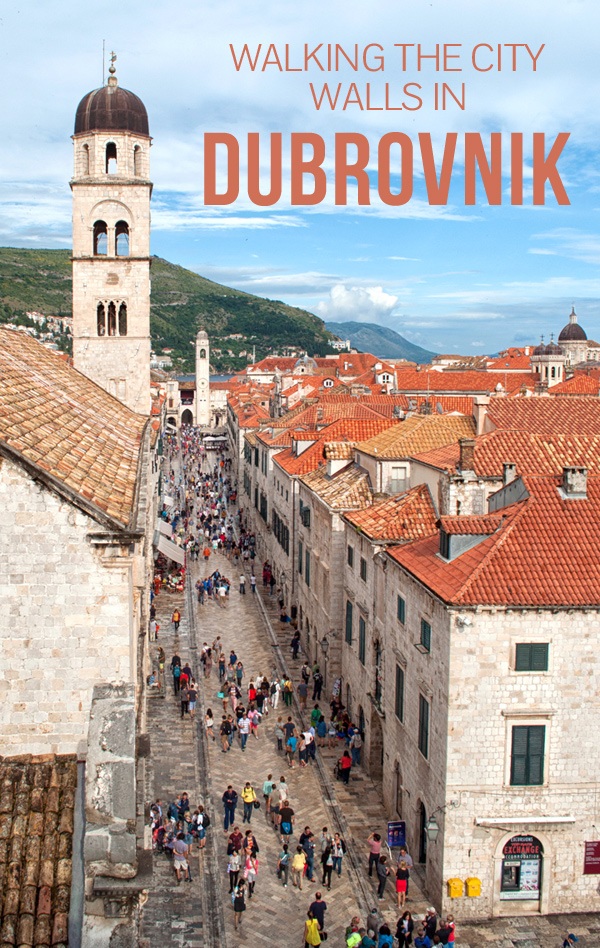 I visited Dubrovnik as part of a Celebrity Cruises Venice to Istanbul cruise. Many thanks to Celebrity for hosting my mum and I on the trip. All views and opinions are, as always, my own.

I have traveled to Dubrovnik only once. I live in Northern Europe and I have been to many places in Europe, but I can say for sure that Dubrovnik is one of its kind. I recommend it to everyone wanting to see lots of culture and embrace European history.

It's a great city – hope to be able to explore more of Croatia soon too!

Hey Lucy, great post on Dubrovnik, thank you for the detailed information! I see you had a great time visiting the city! I was traveling in the Balkans in summer 2019 and summarized my experiences on my blog with a focus on a compact summarized one day itinerary with maps and checklist. My absolute favorite spot in Dubrovnik is the Lovrijenac Fortress with the great panoramic view of the city walls and the Adriatic. Best wishes Philipp

Thanks – yes it's a wonderful place!

Wow, great article about Dubrovnik! One of my favorite cities in croatia! Can´t wait to go there again!

Thanks Patricia, hoping to get back to Croatia sometime soon too, it's such a great country.

I say to everyone visit Dubrovnik for sure as I did on my first trip to Croatia from Australia and fell for the country but make sure you head all the way up the coast to Rovin as tbe whole country is just as beautiful if not even more beautiful in parts. Oh and don't leave out the islands, ie Hvar, Brac, Korcula,Vis, Murter, Losinj, Cres amongs my favourite as they are the countries true gems

Dubrovnik is definitely the starting point for a lot of people's discovery of Croatia, so much more to see though – hopefully I'll get back and explore some more soon.

Great blog post. I'd really love to visit one day, this has definetely made me want to do it sooner rather than later!

It is a such a beautiful place, hope you get to visit soon!