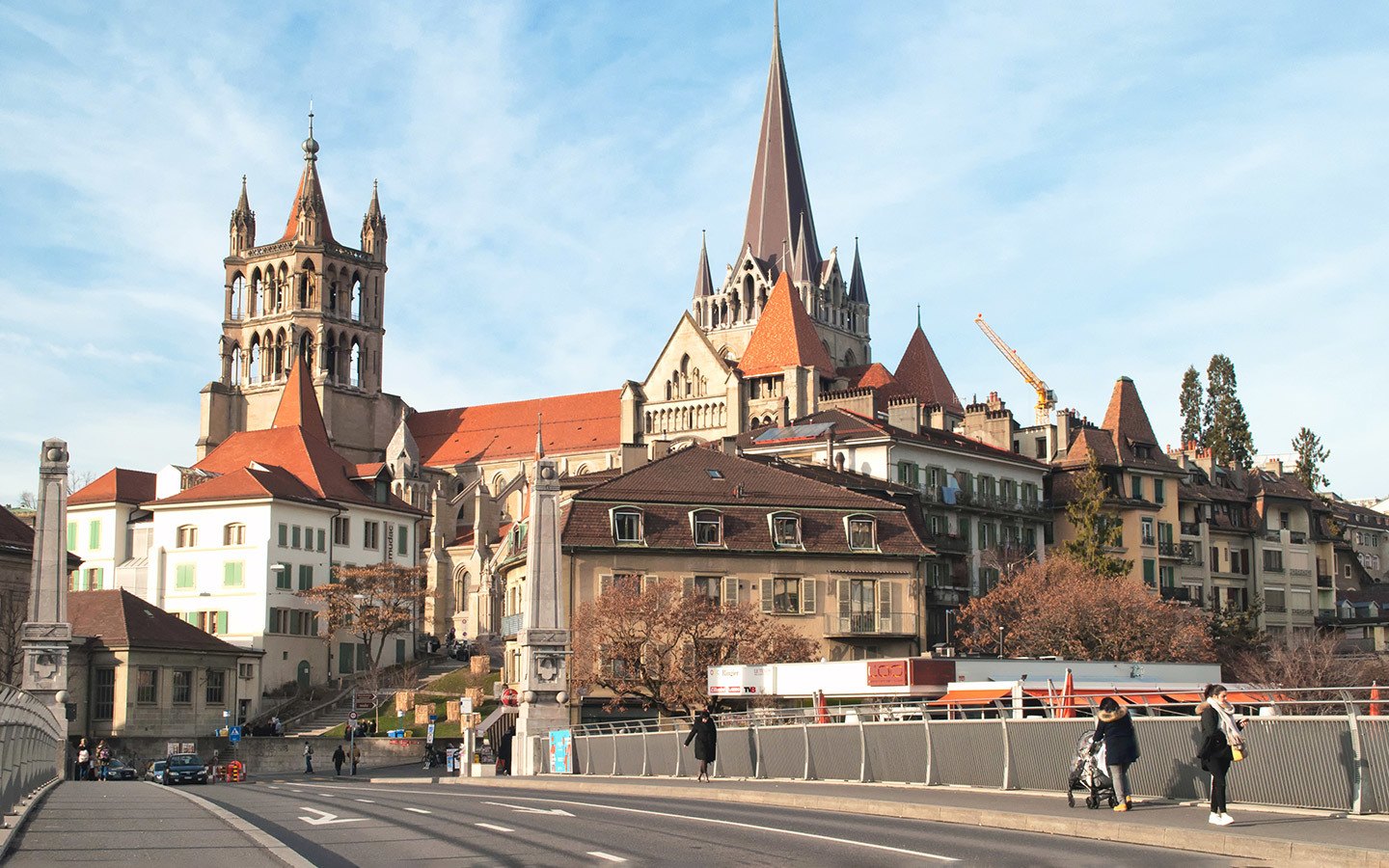 On the northern shore of Lac Léman (aka Lake Geneva) in French-speaking Switzerland, Lausanne is a city of two halves. Uphill you’ve got the old town of historic churches and narrow shuttered townhouses, and downhill there’s the lakefront resort of parks and castle-style hotels. Lausanne has kept that traditional Swiss feel – with cheese, chocolate and beautiful mountain scenery in plentiful supply – but with students making up a third of the population, it has more bars and clubs than anywhere else in the country too. And it’s all only 40 minutes by train from Geneva. So if you fancy a Swiss escape, here are my top things to do in Lausanne.

The best things to do in Lausanne 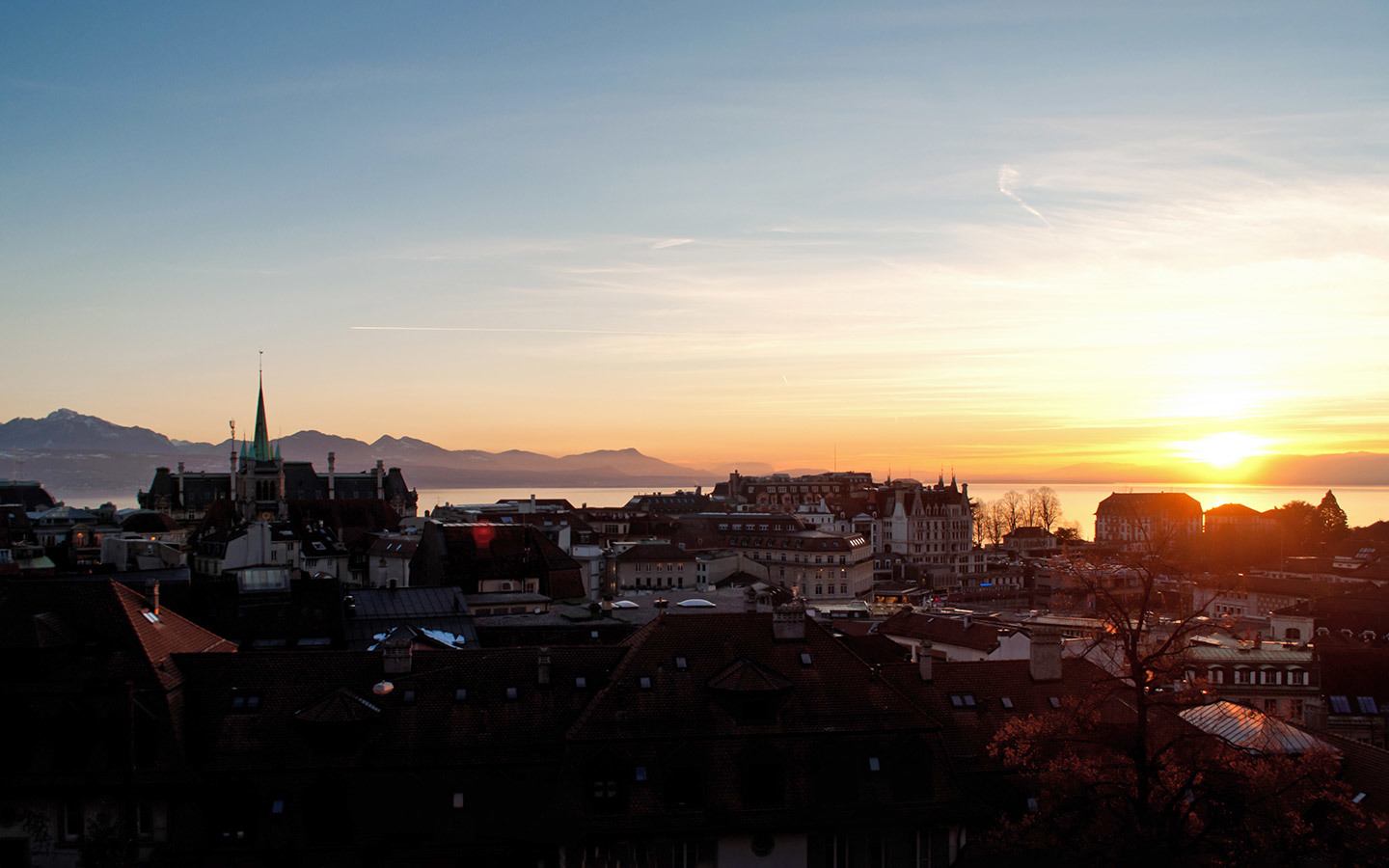 Sunset over Lausanne from outside the cathedral

Switzerland’s largest cathedral towers over Lausanne. It was built by the Catholics in the 13th century, but was stripped of its ornate gold and tapestries during the Reformation, leaving the stained glass windows and the south portal’s original painted statues. This impressive building has a secret quirk – if you stand in the nave you can see it’s not quite symmetrical. It was built on an angle when it was extended to avoid hitting the neighbouring Bishop’s Palace.

Lausanne Cathedral is also the site of one of the city’s oldest traditions – the night watchman. Every night since 1405 a watchman has called out the hours between 10pm and 2am from the tower. The first watchmen were fire lookouts back when most houses in Lausanne were made of wood, and they’re still letting local residents know all is well 600 years later. 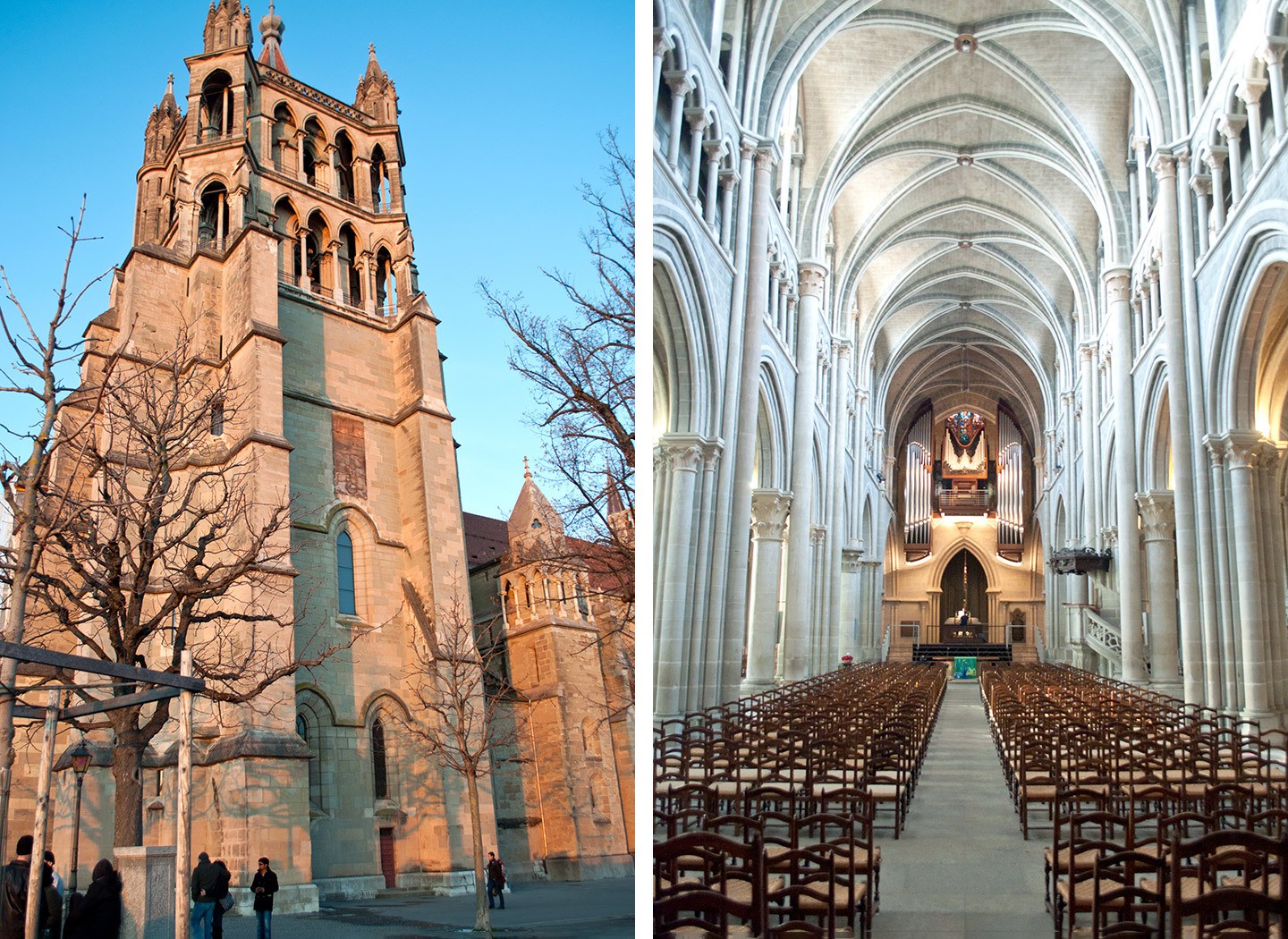 Go back in time in the old town

Lausanne’s medieval old town is a hillside web of cobbled streets with towering narrow houses and covered wooden staircases to explore. The streets surrounding the cathedral are full of medieval buildings with bistros and boutique shops. There’s also the Château Saint-Maire, a former bishops’ residence, and the Ancienne Académie theology school.

Head to the Place de la Palud, where the clock at the Hôtel de Ville (Town Hall) strikes the hour with a processional of mechanical figures from the history of Lausanne. The square is also where you’ll find Lausanne’s weekly market on Wednesday and Saturday mornings. And one of the prettiest of the covered staircases runs from Place de la Palud up to the Esplanade de la Cathédrale, where you get panoramic views out across Lausanne’s rooftops and Lac Léman. 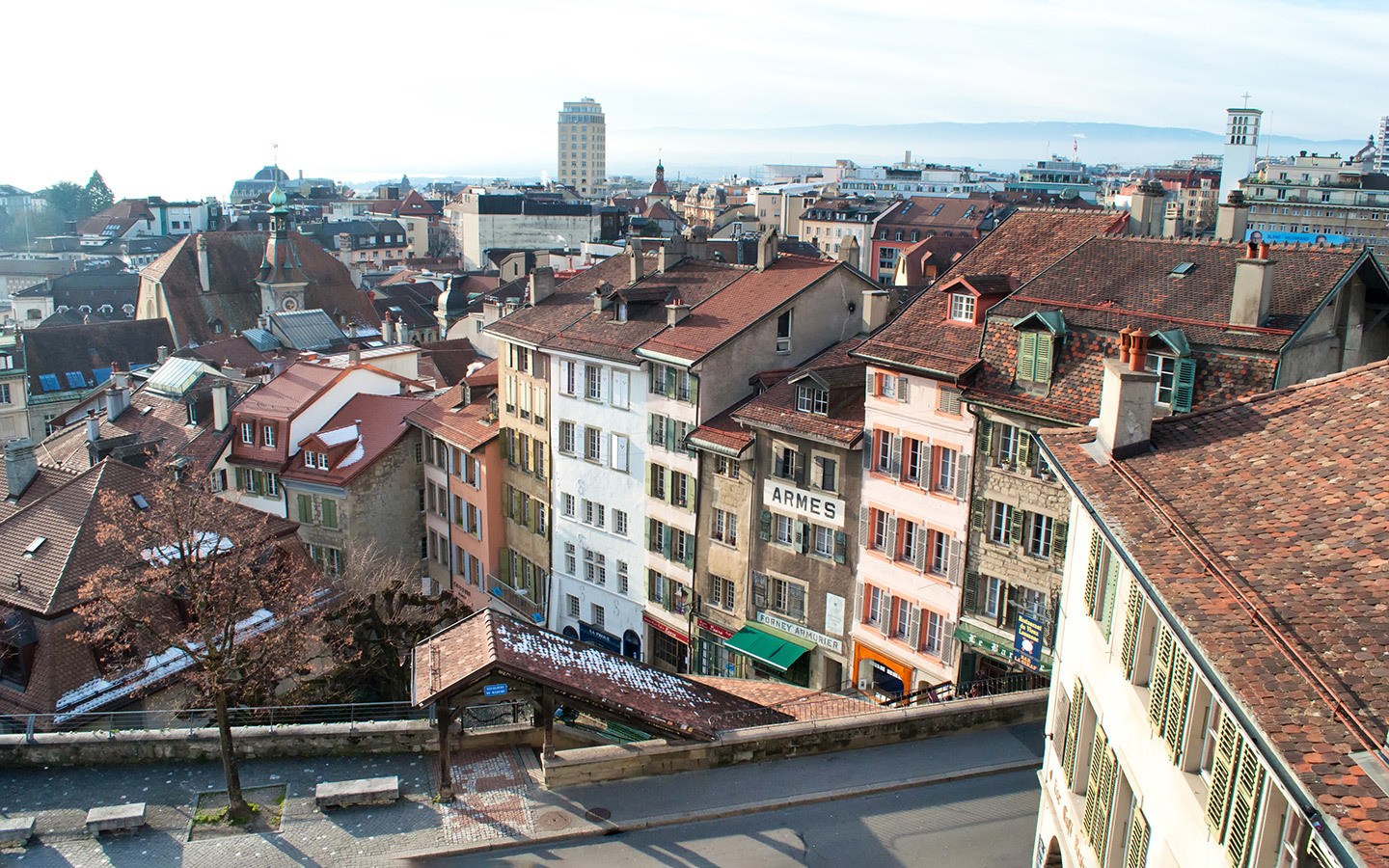 Not far from the historic heart of Lausanne, the district of Flon is set firmly in the 21st century. The valley of the River Flon in a dip between two of Lausanne’s hills was covered over by warehouses in the 19th century. But when they were abandoned in the 1930s, the area ended up as an decaying eyesore with a bad reputation until it was redeveloped in the late 1990s.

Old buildings were renovated or torn down and replaced with cutting-edge architecture, and the area was filled with quirky shops, galleries, restaurants and bars. Art and architecture are a big part of Flon, from innovative buildings that breathe in and out to regulate their temperature to murals on old warehouses. Check out vintage furniture at interiors store Port Franc, grab a drink under the arches of the old bridge, and finish the night off at cult nightclub Mad. 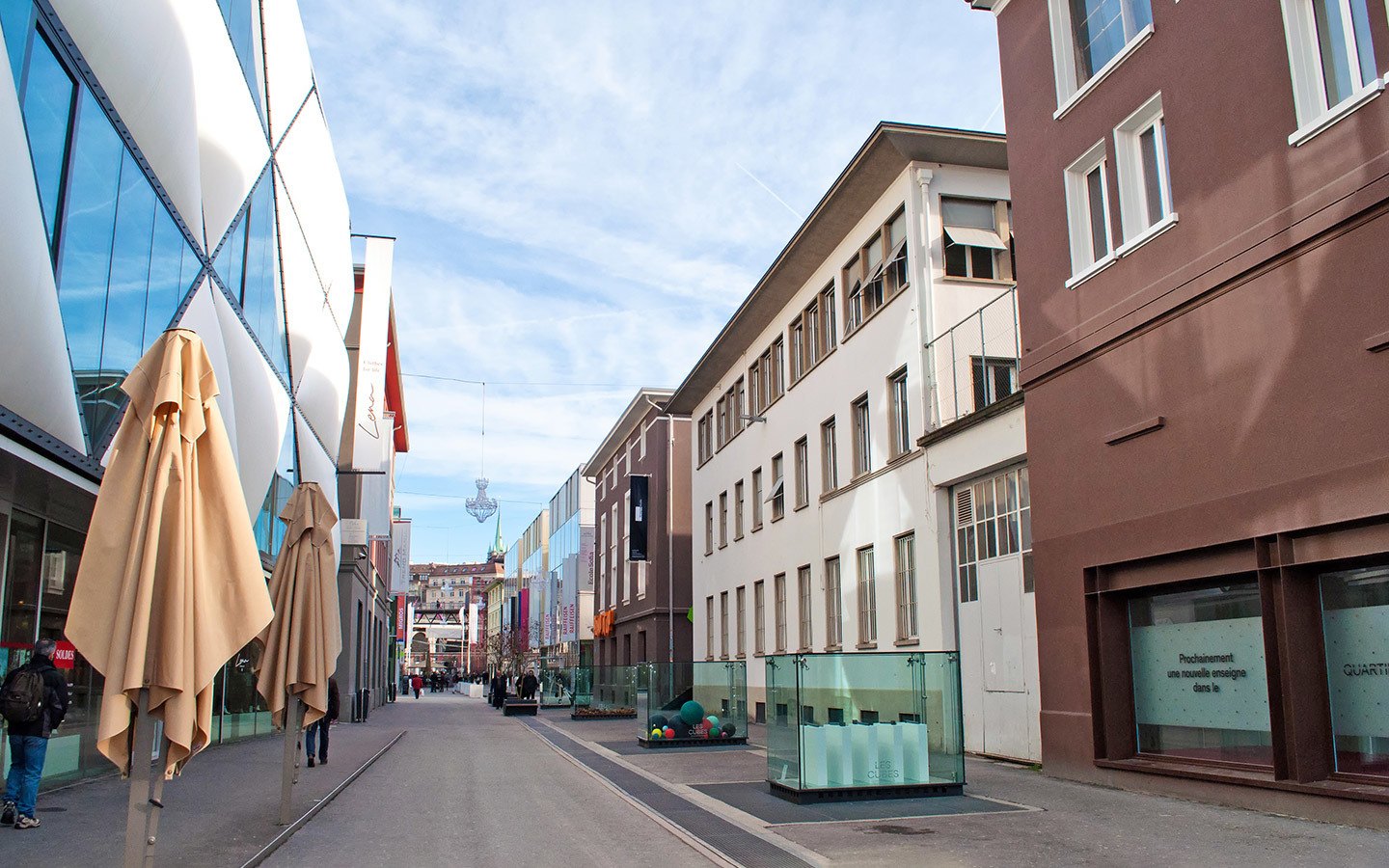 Bars and galleries in Flon

Lausanne has been the home of the International Olympic Committee since it was moved there by Pierre Coubertin, the French founder of the modern Games, to keep it safe during WWI. You can find out more about the history and spirit of the games at the Olympic Museum, set along Lausanne’s lakefront. The museum is split into three sections – the Olympic World, the Olympic Games and the Olympic Spirit – and takes you from Ancient Greece to the present day.

On display you’ll find Olympic torches from all the past games, as well as medals, costumes and posters, showing how designs have changed through the years. There are also simulators so you can give some of the sports a try yourself and see if you’re up to Olympic standard. And outside the museum are gardens dotted with 43 sport-inspired sculptures. 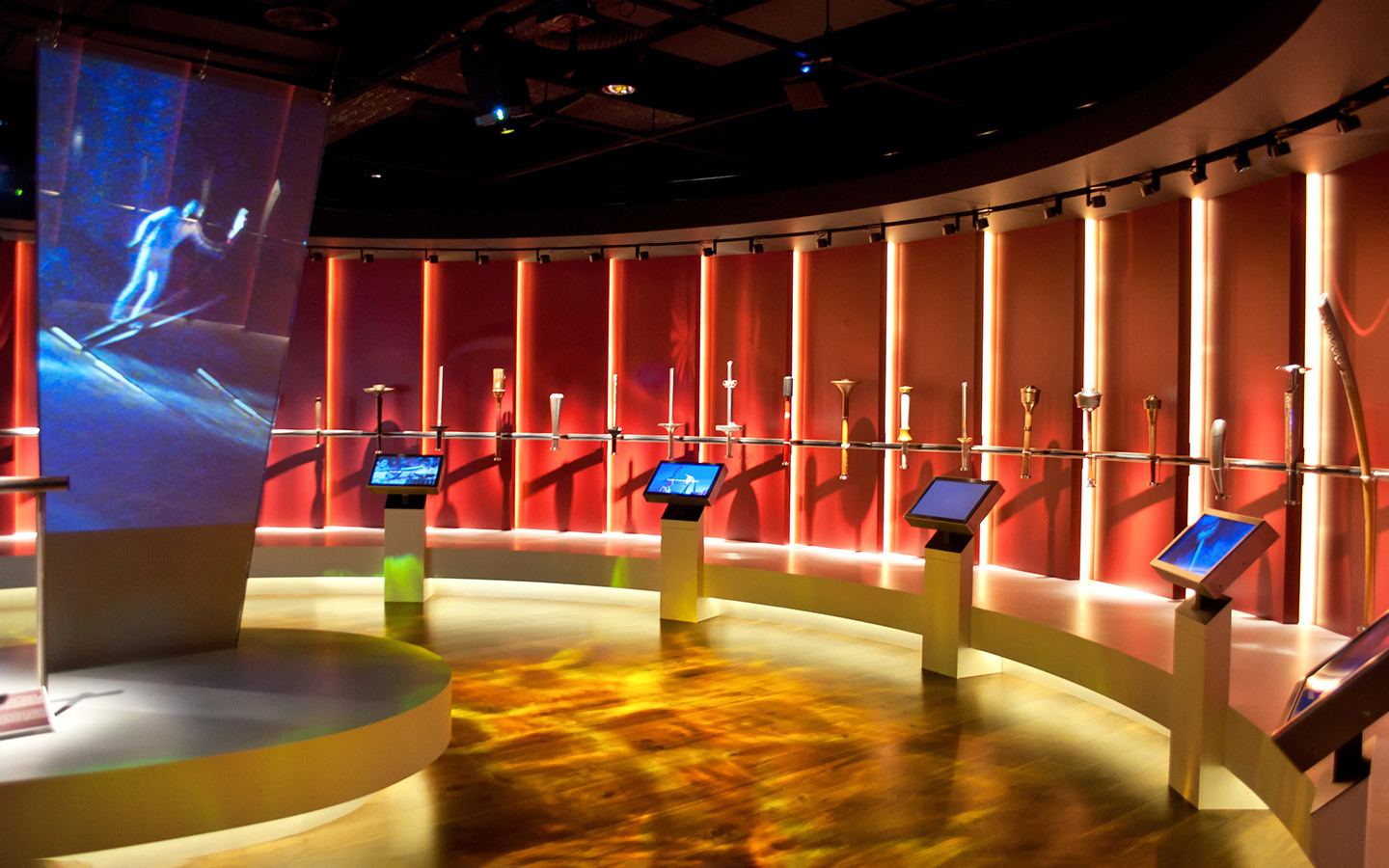 Torches from past Games at the Olympic Museum

Most cities boast a range of museums and galleries, but Lausanne’s most famous gallery is a bit unusual. Instead of the usual famous names, the Musée de l’Art Brut gallery focuses on ‘outsider art’. The artists and sculptors featured include psychiatric hospital patients, prisoners, children and social outcasts – none of whom have had any training in the arts.

There’s also the Elysée Museum of Photography in an 18th-century mansion overlooking the lake, which contains works by famous Swiss photographers as well as Charlie Chaplin’s personal photography collection. And the Hermitage Foundation art museum, which doesn’t have a permanent collection but instead shows regular temporary exhibitions showing artworks by different artists from Switzerland and around the world, from Monet to Degas. 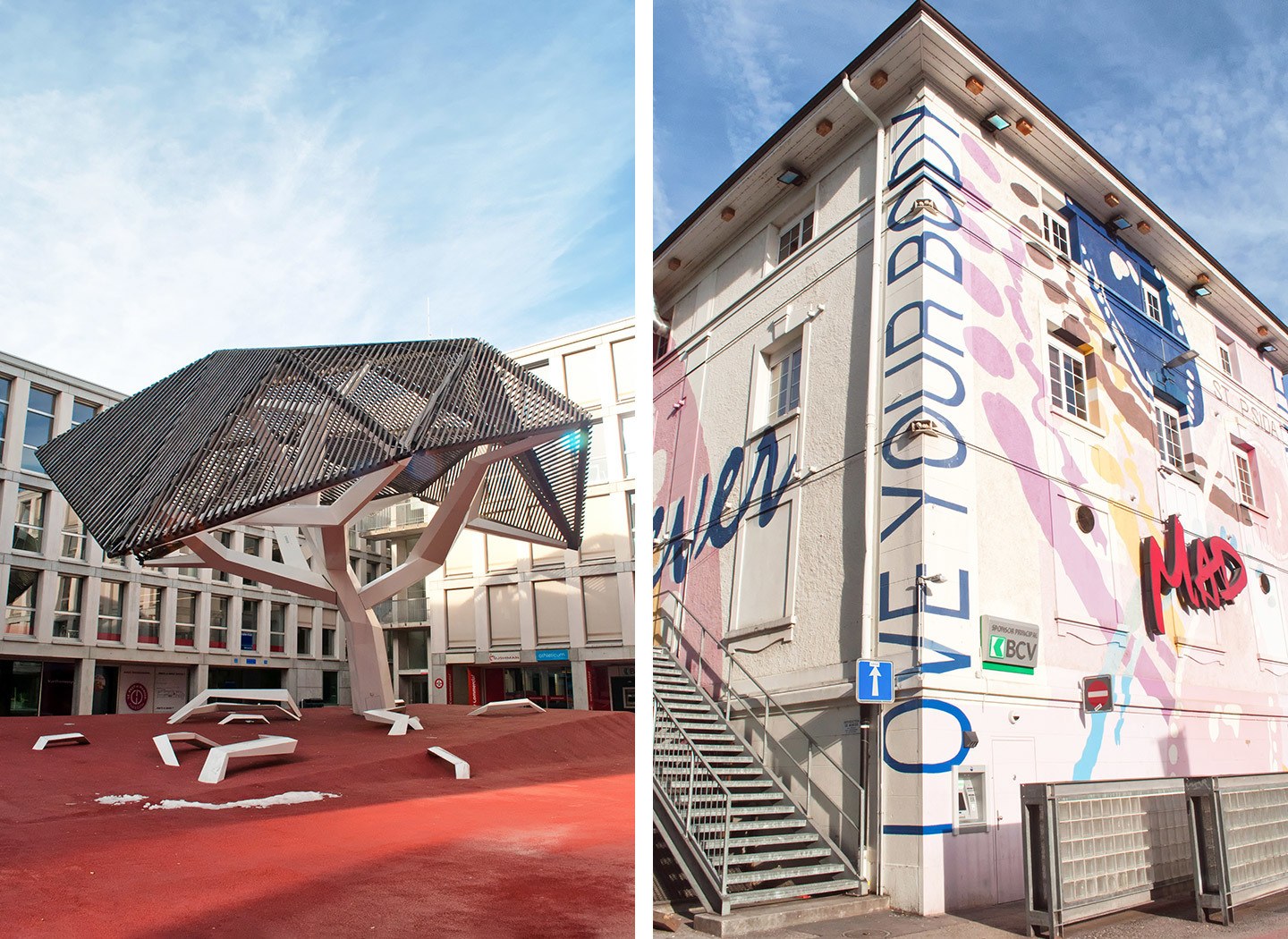 Take a walk along Ouchy waterfront

The spectacular views across Lac Léman are part of what makes Lausanne so special. Over its wide expanse of water is the French town of Evian with the snowy-capped peaks of the Alps behind it. Running along the edge of the lake is a kilometre-long waterfront walkway. When I visited in winter we has the misty winter scenery almost to ourselves, but in summer the lakeside is buzzing with families and couples taking a stroll in the sunshine.

Ouchy is the name of the area near the waterfront that was once a separate fishing village. Today it’s home to a row of luxurious hotels, including the Hôtel Angleterre where Lord Byron wrote his poem The Prisoner of Chillon. Ouchy is about half an hour walk downhill from Lausanne’s old town, but you can also get there by Metro. Line M2 on Lausanne’s compact Metro system connects the two via one of the world’s steepest underground railway lines. 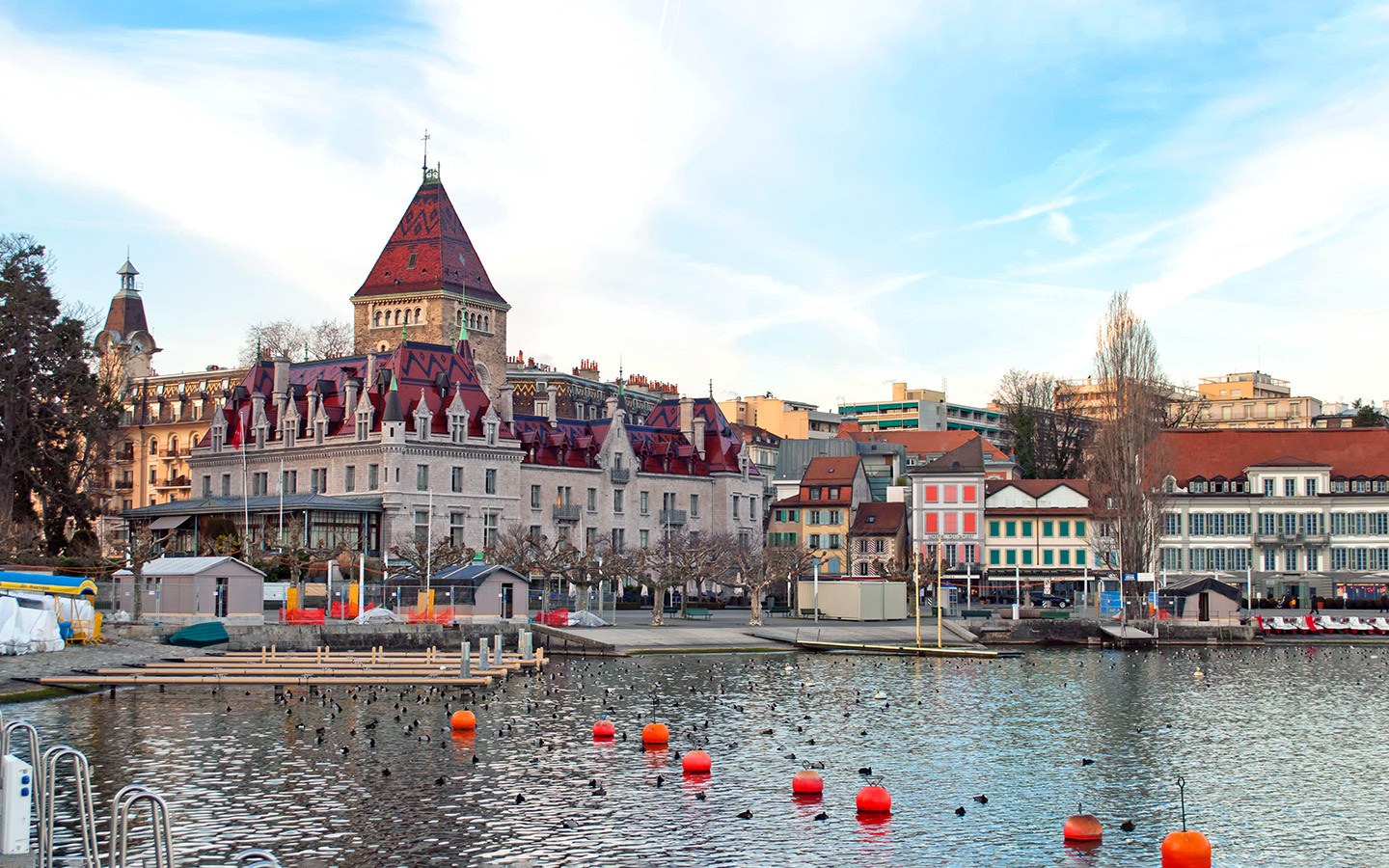 Along the lakeside at Ouchy

Set sail on the lake

Lac Léman is one of Western Europe’s largest lakes, stretching across Switzerland from Geneva in the west to Montreaux in the east. In summer you can get out onto the water and cool off with a swim, or try out windsurfing, wakeboarding and rowing. But getting out onto the lake on a boat trip is one of the essential things to do in Lausanne. Take a fondue cruise past the Lavaux vineyards on board a paddle steamer, sail a solar-powered boat along the coast or head out in restored 1930s wooden barge La Vaudoise, run by the ‘Brotherhood of Pirates of Ouchy’. 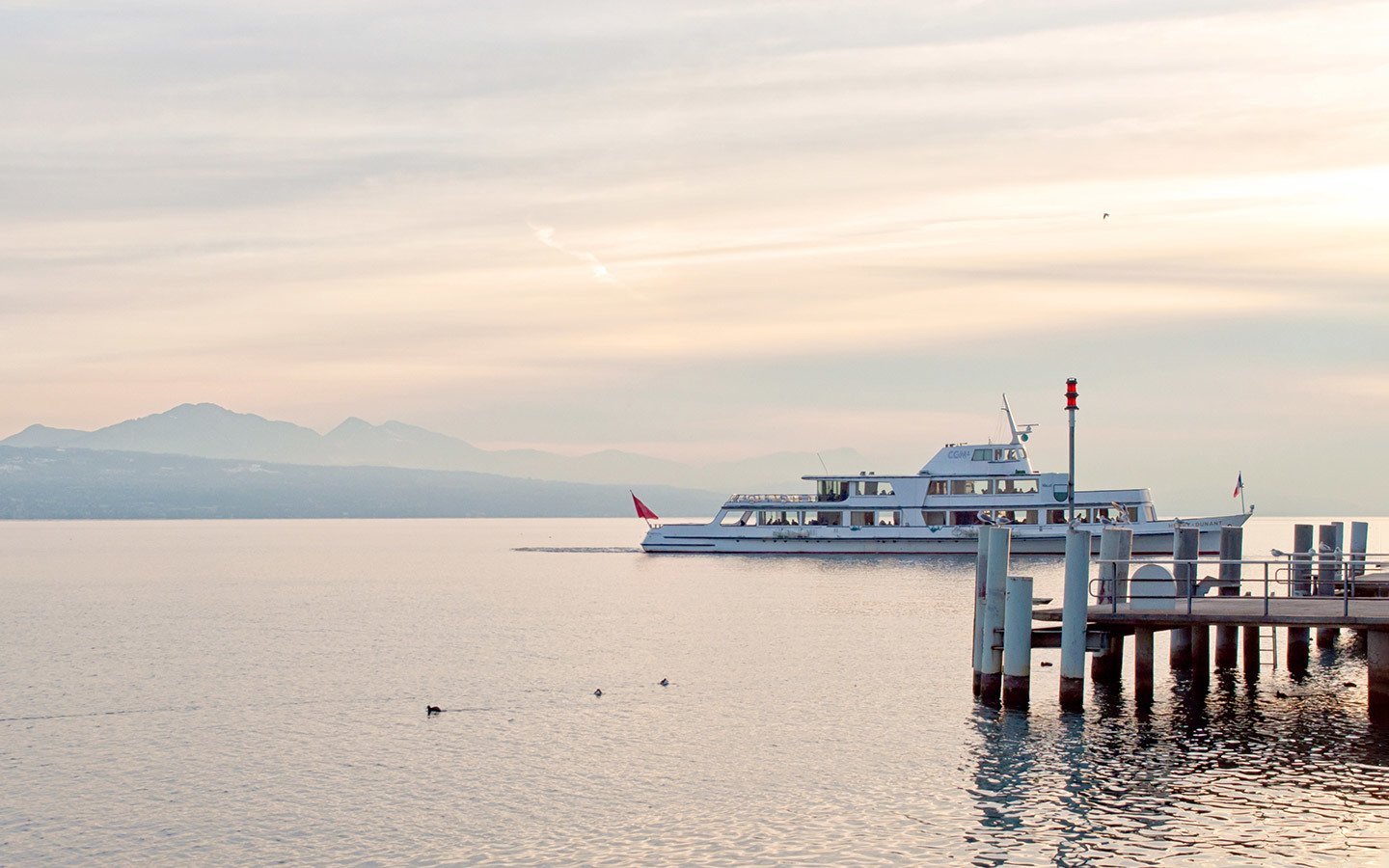 It wouldn’t be right to visit Switzerland without stuffing yourself on cheese and chocolate. We visited local favourite Café du Grütlí, which has been serving fondue since 1849. Their speciality gooey, cheesy concoction comes with a bag of hot potatoes for dipping and thinly sliced rare beef. And for hot chocolate visit Le Barbare, a tall old house next to a 13th-century wooden staircase. Their rich, decadent chocolate will give you the energy to tackle Lausanne’s hills.

There’s more to Swiss food than dairy products though. We tried féra (a lake fish) and Lavaux wine at the Brasserie de Montbenon over lunch with panoramic lake views. Also check out the old town market on Wednesday or Saturday mornings for cured meats, wild mushrooms and piles of fragrant spices. The Places We Love guide (available from the tourist office) has lots more locals’ tips for interesting places to eat, drink and shop in Lausanne. 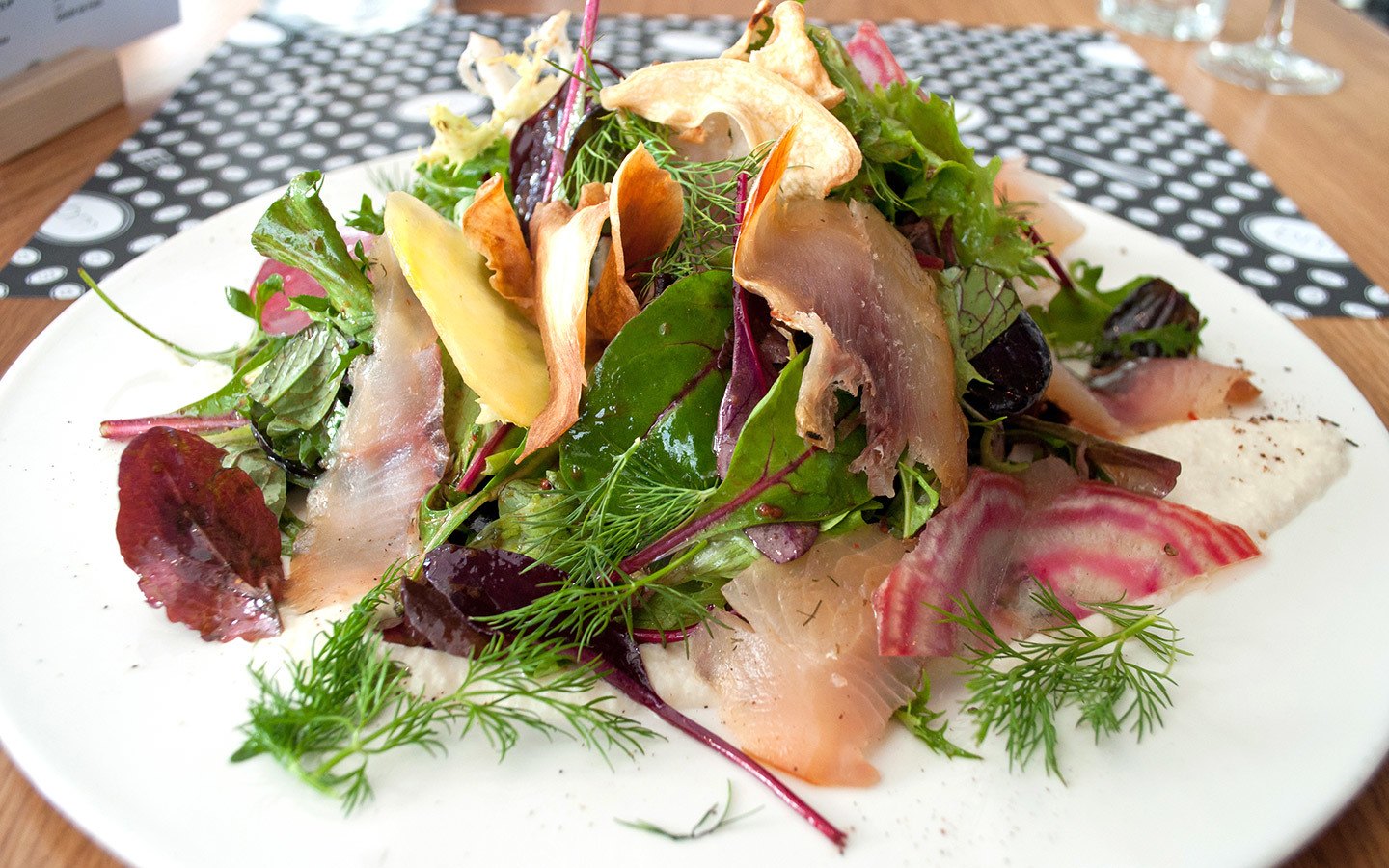 Féra at the Brasserie de Montbenon

Looking for somewhere to stay in Lausanne? 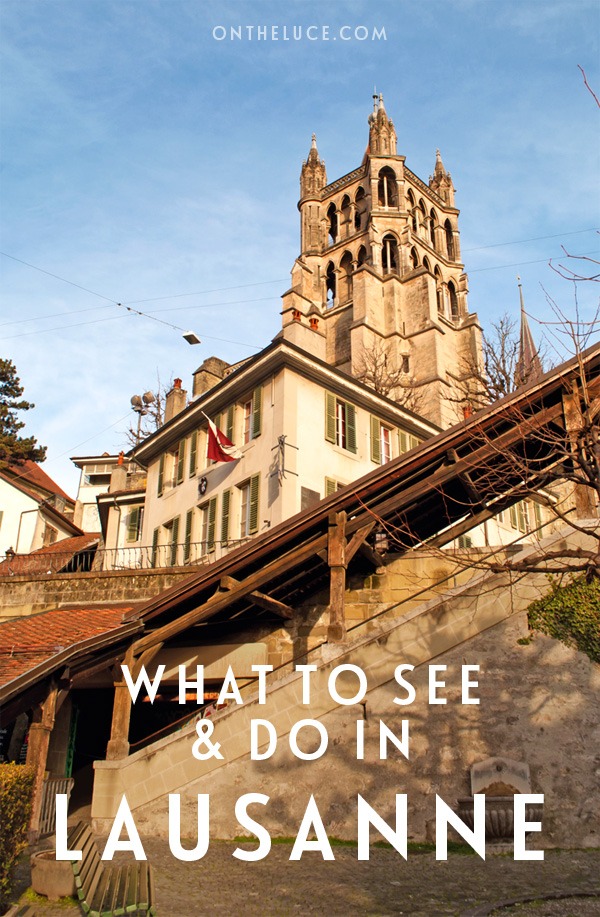 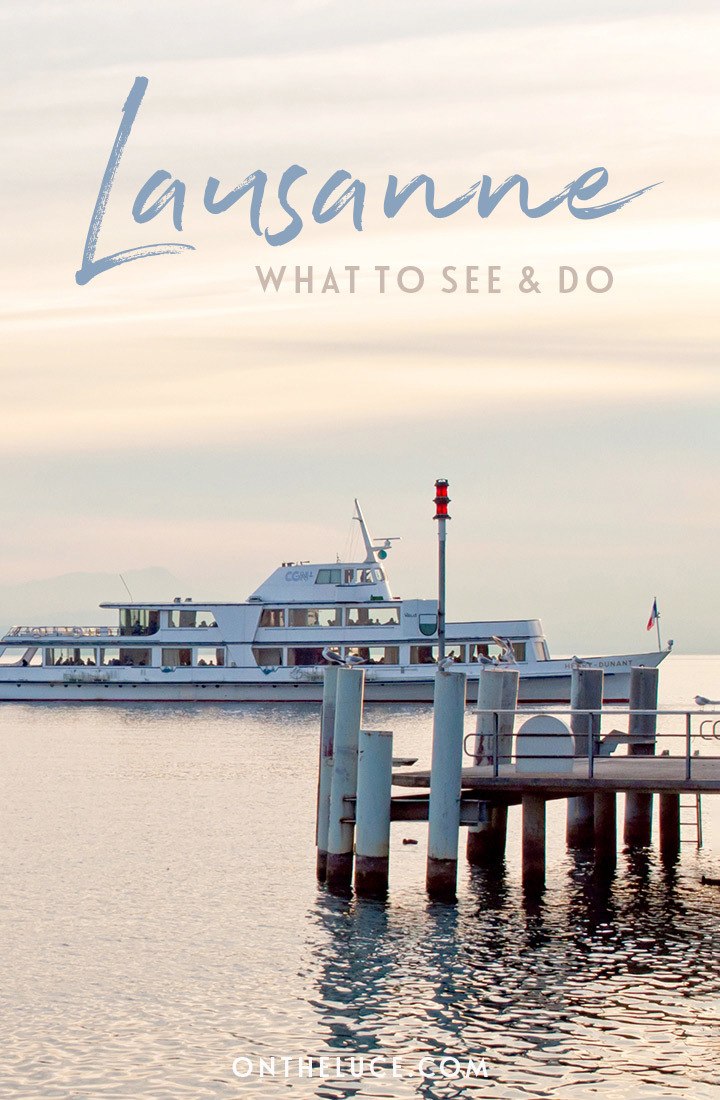 Many thanks to Lausanne Tourisme for hosting my trip to Lausanne. This article contains affiliate links, where I get a small commission at no extra cost to you, thanks.

I only did a short time in Lausanne and looks like I missed out on quite a bit. I remember doing the cathedral and checking out the views from there, that was amazing. I took the ride down on the metro and checked out the Ouchy area. I am so longing for a return trip to Lake Geneva, now I need to go back (and as a sports fan, the Olympic museum is up my street). Great list here Lucy :)

I'm not a huge sports fan but really liked the Olympic Museum, good mix of interactive and history exhibits. And the lake backdrop really goes make Lausanne a beautiful place!

Is Le Barbare still open? I think it closed some months ago and now the municipality is trying to find what to do with it.

Thanks for the update, I will look into it.

Switzerland is one of my favourite places in the world and I loved Lausanne, we went for a swim in the lake on a beautiful summer's day and it was heavenly!! If you liked Lausanne I'd recommend a visit to Thun!

Switzerland has some lovely places – I've travelled around a few but not been to Thun yet so will look that one up!

Thanks Jo, it's a stunning spot (and the weather behaved perfectly!).