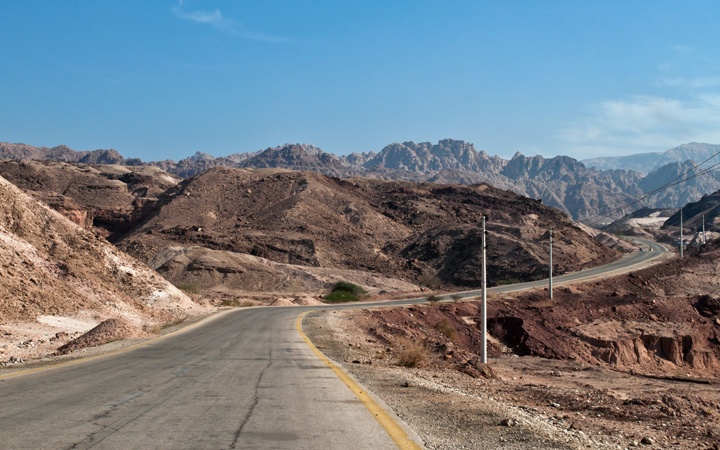 Two directionally challenged travellers, an Amman-wide shortage of GPS devices and one small map to cover the entire country – it wasn’t the best start to a Jordanian road trip. Our destination was Petra, and the easy way to get there was with a 3.5-hour drive along the modern Desert Highway. But the more interesting route was via the King’s Highway, taking more like six hours as the road winds its way through the mountains past historic towns and remote camps. There was no contest over which route we would take… we just had to find our way out of Amman first.

We’d been assured that driving in the rest of Jordan would be no problem, but Amman with its underpasses, overpasses, circles and manic traffic was something else entirely. Would we be doomed to spending our entire trip trying to get out of the city? Luckily there’s always someone to help you out in Jordan. Our taxi driver came up with a plan – he would meet us the next morning and lead us out of the city as far as the start of the King’s Highway. So the next day we weaved through the traffic behind him along a completely signpost-free route we’d never have found on our own. Then as the traffic faded and we started to leave Amman behind, he waved us off and we were on our own. 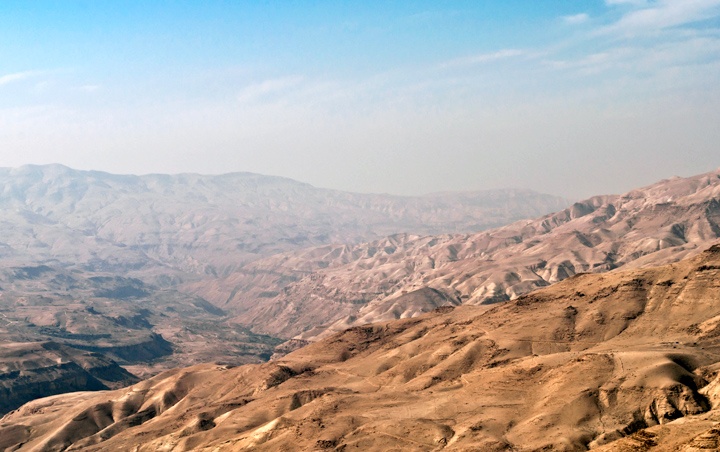 Mountain views along the King’s Highway

The King’s Highway – or Route 35 as it’s (sporadically) signposted here – has been used as a trade route through the Middle East for 5000 years. It originally ran all the way from Helipolis in Egypt, up through Jordan and into Syria. Over the years it was used by the Nabataeans to carry spices, fortified by the Romans, followed as a pilgrimage route by Christians and taken as the road to Mecca by Muslims. Today though most traffic follows the faster highways, and along some stretches you hardly see another car. 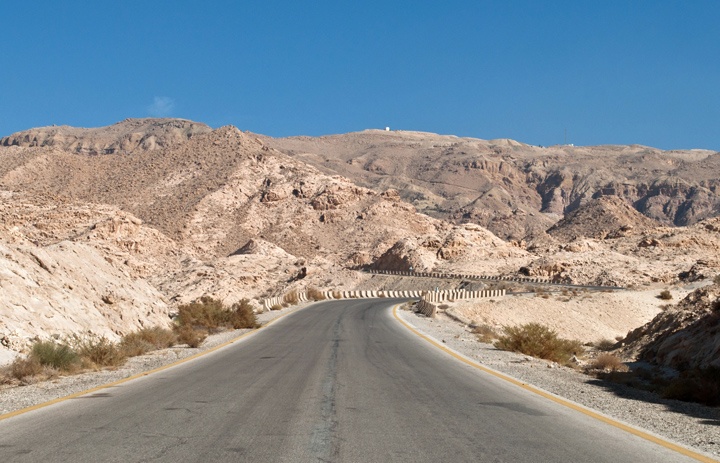 Deserted roads along the King’s Highway

As we left the urban sprawl of Amman behind, the first town we came across was Madaba. It’s a busy modern town today – with a chaotic market filling the streets and children spilling out onto the roads on their way home for lunch – but its history is just below the surface, literally in this case. Madaba has some of the best preserved Byzantine mosaics in the world, and one of the largest – a map of Jerusalem and the Holy Land made up of two million piece of stone. You can see it in the Greek Orthodox Church of St George and there’s a museum of other mosaics. But it’s thought that there are hundreds of other mosaics still hidden underneath buildings across the town. 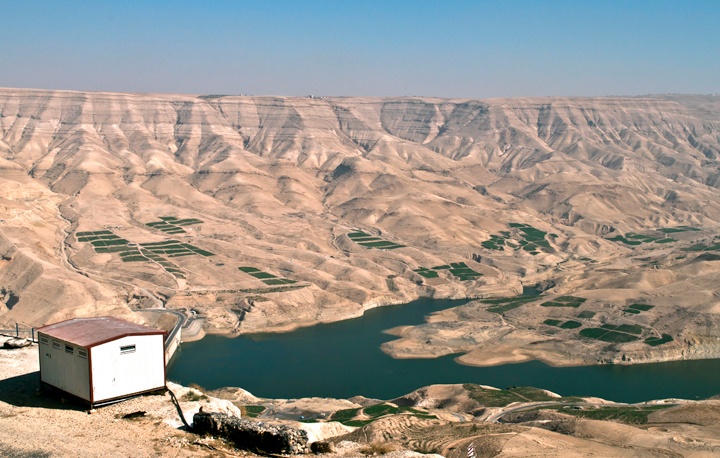 The view down into the gorge at Wadi Mujib

From Madaba the road gets quieter and weaves down through some extreme hairpins into a deep gorge – Wadi Mujib. I’d never heard of it before but it’s known as Jordan’s version of the Grand Canyon. Almost 1300 metres deep, the views across the dry rocky valleys from the top were stunning. It’s not completely empty here though, you come across one or two enterprising stallholders at prime viewpoints and the valley dam produces patches of irrigated farmland amongst the sand. Then there are the occasional nomadic camps, with just a campfire and a few goats in this harsh environment in the middle of nowhere. 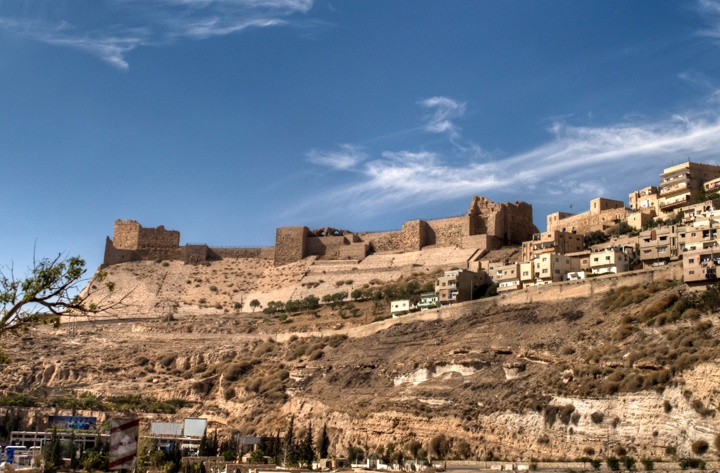 Further along, the King’s Highway runs through Karak, dominated by its huge 12th-century Crusader Castle, and on to Shawbak. But that ‘just keep following the road’ advice came a bit unstuck around Karak and we found ourselves on an unscheduled detour down through the mountains towards the Dead Sea. More amazing views on the way up and down to the shore just about made up for a few extra kilometres though. On the way back up we came across this cafe with a few chairs perched on the mountainside and stopped for a drink. Another couple of tourists sat nearby looking intently at their map and asked if this was the right road to the Dead Sea, so at least we weren’t the only ones. 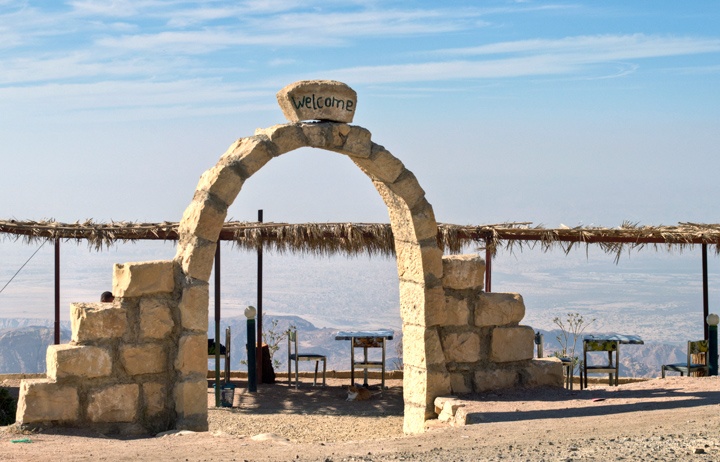 Cafe in a prime spot overlooking the mountains

After rejoining the King’s Highway at Tafila, the roads started to get busier as we met the traffic coming in off the Desert Highway at Shawbak. Suddenly we were back in the twenty-first century, following the modern roads as we pulled up into Wadi Musa, the town that surrounds the ruins of Petra. 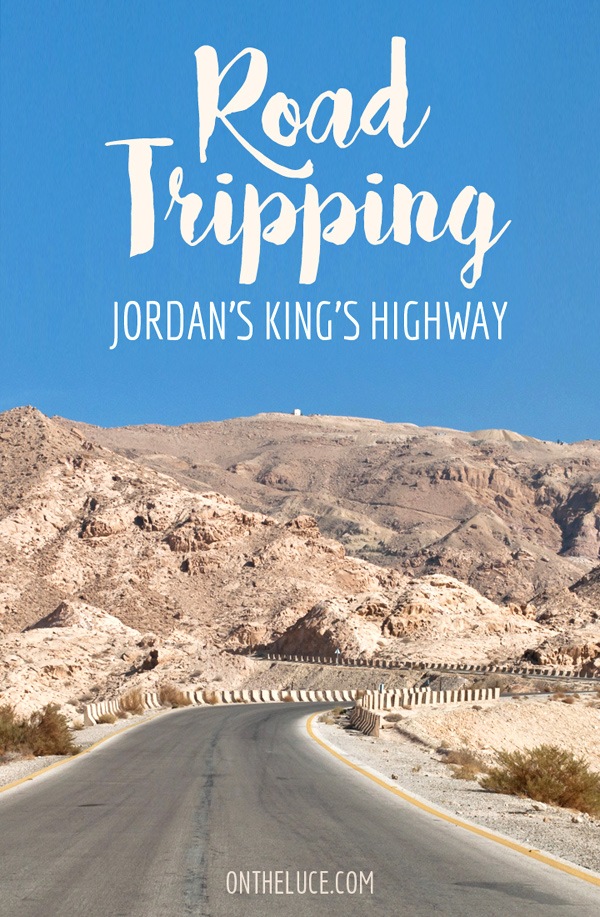