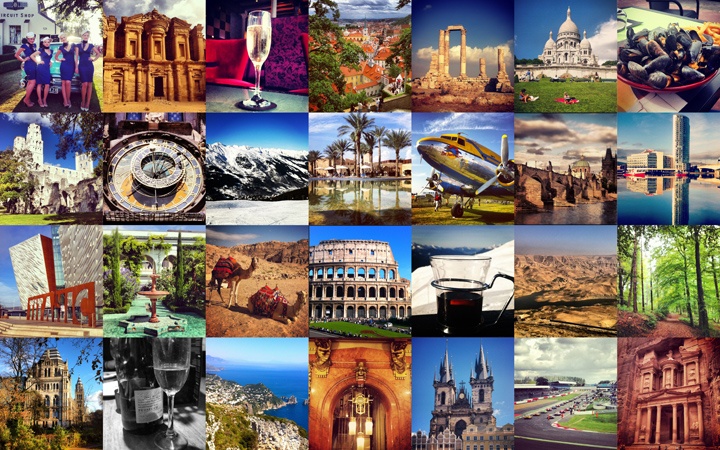 After an epic year of travelling in 2011, with over a third of the year spent on the road, 2012 had a very tough act to follow. But although it might have lacked in quantity by comparison, it made up for in quality, with two of my travel wish-list trips ticked off and two new countries visited. It didn’t quite all go to plan though – at the start of the year I thought I’d be travelling around Canada and sailing the Norwegian fjords this year, but both of these trips had to be postponed due to a lack of time and money as I finally put down some permanent roots in April by buying a house in Cheltenham.

After living in 12 different rental places since leaving university, it feels good to know I won’t be packing up again anytime soon. House-buying doesn’t come cheap though (especially if you’ve never stayed anywhere long enough to buy any furniture), and it put a big dent in my travel funds. Luckily I got offered a nine-month work contract which helped, but didn’t leave me with much time left to travel in. But even without any long-term travels this year, I managed to squeeze in enough short trips to keep my wanderlust at bay – for now anyway. This is where my 2012 travels took me…

Winter: Skiing in Méribel-Mottaret in the French Alps

After my five weeks in the Alps last winter were more sunbathing in the slush than skiing in fresh powder, this year I was hoping to see a bit more snow. And in January in Méribel-Mottaret we certainly got it, with a metre of snow falling in one afternoon. With temperatures well into the minuses I finally got to use the thermals I didn’t need last year. A group of 11 of us – a mixture of skiers and snowboarders from advanced to complete beginners – got together and hired a catered chalet in the huge Three Valleys ski area in France. After looking after 15 visitors last year, I got to be waited on this time, with three-course meals and free-flowing wine courtesy of our lovely chalet hosts. As well as skiing we got to try out some night-time sledging, snowy walks and of course plenty of vin chauds. And although I don’t think I’ll fit in a 2013 ski trip, I’ll definitely be back on the slopes soon. 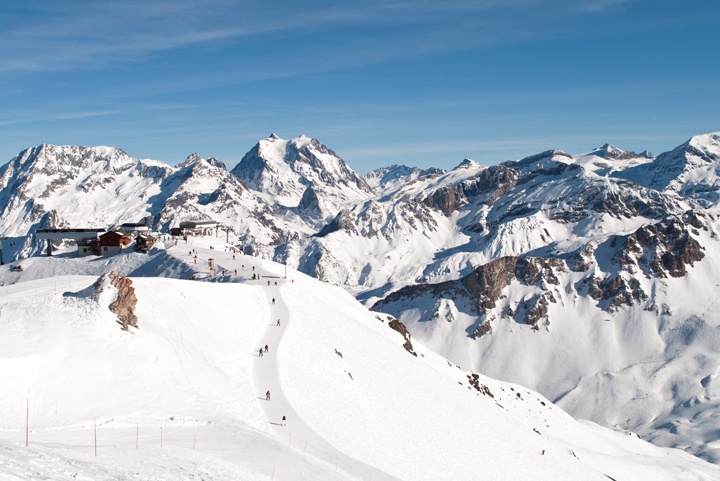 No shortage of snow in the Three Valleys this winter

Spring: Champagne in France and Prosecco in Italy

This spring’s travels were all about the bubbles. First up was a long weekend in Reims in Champagne in March with five women who’d all met on a female travellers’ website. We varied in ages from 20s to 60s and had never met in person before, but bonded over long lunches in Reims, a weird trip around the Pommery cellars, a tour of the vineyards and plenty of bottles of Champagne. Then I switched from Champagne to Prosecco in April with a trip to Sorrento in Italy. The ruins of Pompeii were somewhere I’d had on my travel wish-list for years and were just as fascinating as I imagined. We also fit in a – unexpectedly energetic – trek around the summit of Vesuvius, a boat trip to Capri and a lot of great Italian food and wine. The trip reminded me how much I love Italy and I’m already planning my next visit.

Drinking Prosecco with a view across the Bay of Sorrento

After my initial plans for 2012 had to be rearranged, first on the revised travel list was a long weekend in Prague over my birthday. It was a beautiful place to celebrate, though I’m not the only one who thinks so – the crowds of tourists were sometimes overwhelming. My favourite spots were the quieter places we found, like the Petrin Tower with its views across the city and the Art Nouveau style Municipal House. I also got to head back to Paris in August to stay in the apartment in St Germain where I house-sat last year. After just missing it a few times in the past, I finally got to sunbathe on a Parisian beach at the annual Paris Plages event, as well as checking out some new places – from the beautiful gardens of the mosque to the less-fragrant sewers. Still no Palace of Versailles though… I’ll get there next time for sure!

Autumn: Going back in time at Goodwood and in Normandy

September saw me stepping back in time, first to the Goodwood Revival vintage event. My dad has vintage cars so was in heaven, but even if you’re not a motoring fan you can indulge your Mad Men fantasies by dressing up 1950s style. With everything on the site dating back to pre-1966 – from the newspaper your fish and chips are wrapped in to the music – it’s the nearest you can get to the 1950s without a time machine.  I was also transported back 25 years with a last-minute trip to Normandy, scene of many childhood holidays but one of those places that I’ve just passed by on my travels around France since. But I found out it’s well worth the stop, with its dramatic coastline and historic ruins. Just don’t mention the ferry trip back – five hours in gale-force winds that reminded me why I don’t do boats! 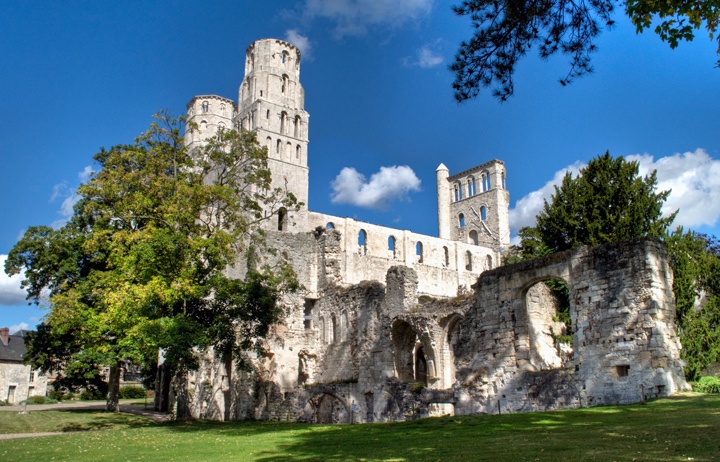 The ruined Jumieges Abbey in Normandy

After I had to change my travel plans earlier in the year, my winter travels were totally up in the air and I had to learn to embrace spontaneity. It worked out well though when I spotted some budget flights to Amman which brought one of my wish-list trips, the temples of Petra, within reach. As well as being totally awed by Petra – both by day and at night – we road tripped through the spectacular scenery of the King’s Highway and luxuriated at the Dead Sea. Though we were lucky to find any of it after a nationwide sat-nav and map shortage meant a few unintentional diversions. Then after sunny days in Jordan my last trip of 2012 was a bit chillier – sampling the Christmas markets and the new Titanic Exhibition in Belfast.

The view across Petra from the Royal Tombs

So that was my 2012 travel year – visiting four countries (Italy, Czech Republic, Jordan and four trips to France), ticking two trips off my travel wish-list (Pompeii and Petra) and travelling for a total of 65 days. More news on my travel plans for next year coming soon, but until then thanks for reading and wishing you all a great Christmas and New Year. 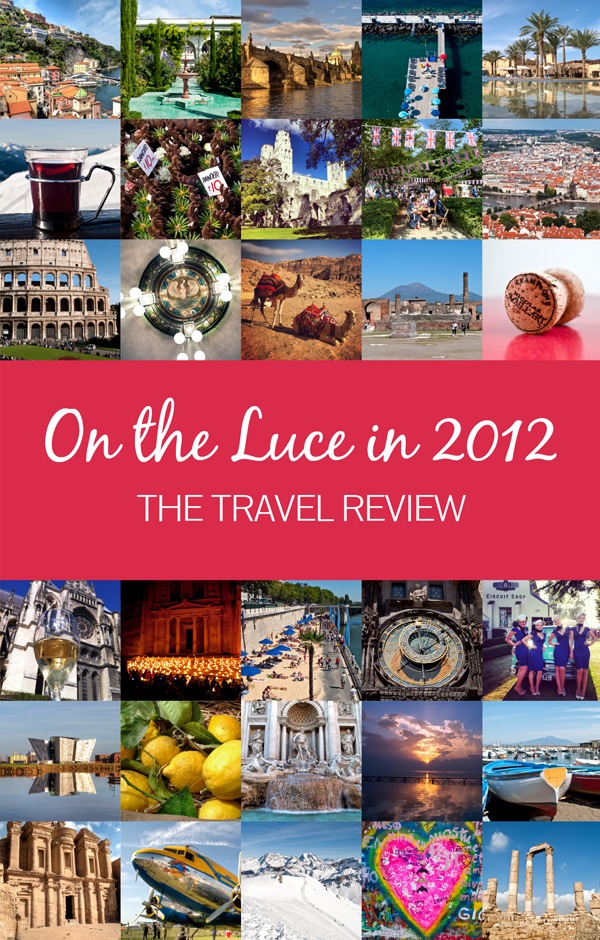 You haven't done too badly at all Lucy :-) Here's wishing you more happy travels in 2013!

Nice photos and exciting journey...Happy new year. You're most welcome to my home, Kuching Sarawak (the land of Hornbill), Malaysia.

Thanks and Happy New Year to you too – I'd love to see more of Malaysia sometime!

Very nice pictures and very a nice article it was interesting to read about you,please stop on my blog in 2013 starting my second solo sailing around the world in a SAN JUAN 24-foot sailboat. You can read my interview in magazine SMALL CRAFT ADVISOR 2012 NO.79 Happy New Year!

Thanks – sounds like you have an exciting 2013 coming up, best of luck for the trip!

Lucy, do you need a friend to accompany your journey next year? please pick me :D happy holiday for you too! :)

Always room for one more! Hope you had a great Christmas and a fantastic New Year to come.

Next year a wedding? They don't come cheap, either, but think of the honeymoon you could have! Merry Christmas, Lucy.

The honeymoon decision is the hardest bit Jo! Hope you have a lovely Christmas and New Year too.