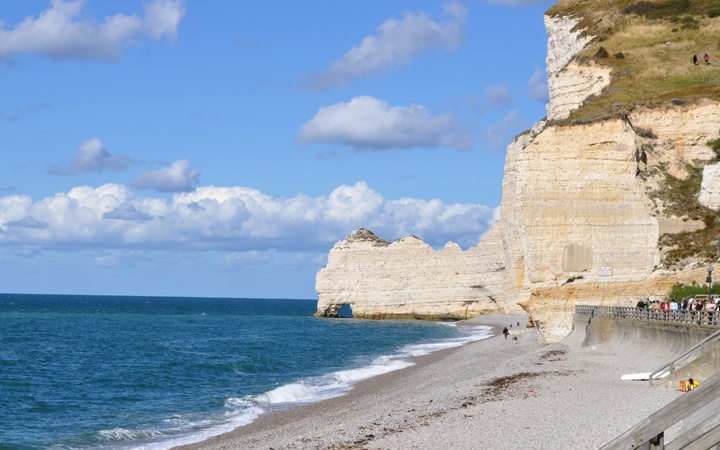 When you picture steep white chalk cliffs battered by the Channel seas, you probably think of England’s White Cliffs of Dover. But the French have their own lesser-known version on the other side of the Channel – La Côte d’Albâtre, or the Alabaster Coast. This 80-mile-long stretch of coastline runs between Étretat and Dieppe in Normandy. It shares the same geology as the coast around Dover, and the sea has carved the same sheer cliffs and rock arches and stacks from it. Not that they will be there too long – the soft chalk rock is eroding back a couple of metres each year. The Alabaster Coast gets its name from the milky white colour of the waters along the coast where the rock’s being dissolved. 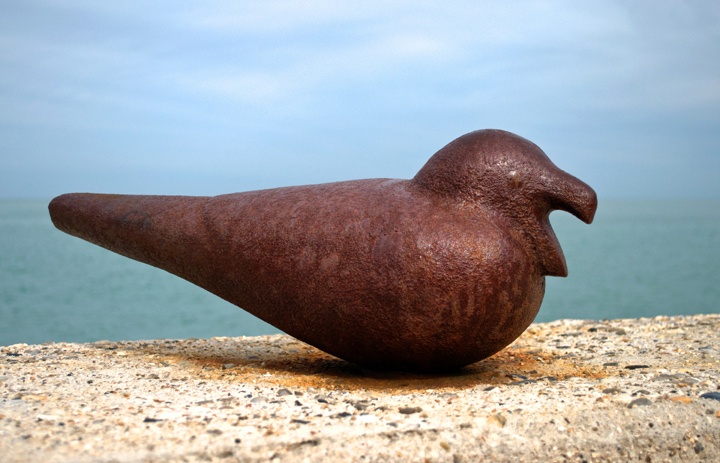 Seagull sculpture on the sea wall at St Valery-en-Caux

I spent years of childhood holidays in France and a lot of them on the Normandy coast, but this was one bit that we’d always passed by before. And we weren’t the only ones. Most of the visitors to the area are French, and despite it being so close to the Channel hardly anyone in the UK knows about it. You might recognise it from a few paintings though as Impressionist artists like Monet, Boudin and Pissaro captured the scenery on canvas, inspired by the region’s scenery and light. 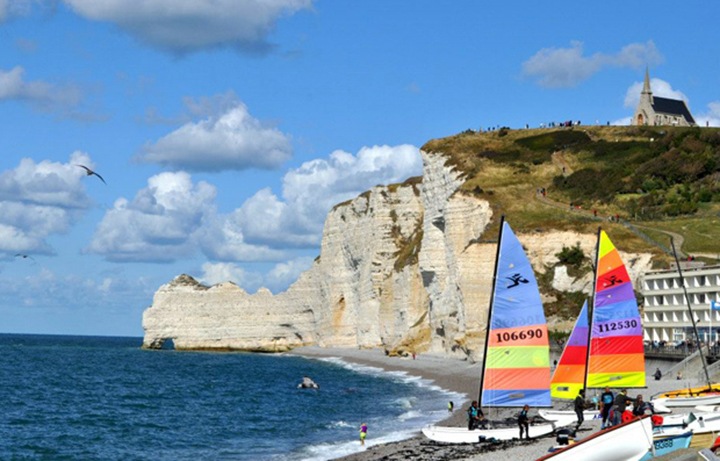 At the east end of the Alabaster Coast is Étretat, with some of the coast’s most famous rock formations, like the Falaise d’Aval arch. You get the best views from the coastal path that follows the cliff past the tiny fishermen’s chapel of Notre-Dame de la Garde. Étretat started out as an oyster fishing village before the railways brought holidaying Parisians to the coast. As well as the Impressionists, writers like Victor Hugo spent their summers here, along with an author called Maurice Leblanc. He wrote a detective series that was known as France’s answer to Sherlock Holmes. They featured a thief called Arsène Lupin who had his lair inside a rock stack known as the L’Aiguille Creuse (hollow needle) just off the coast here. 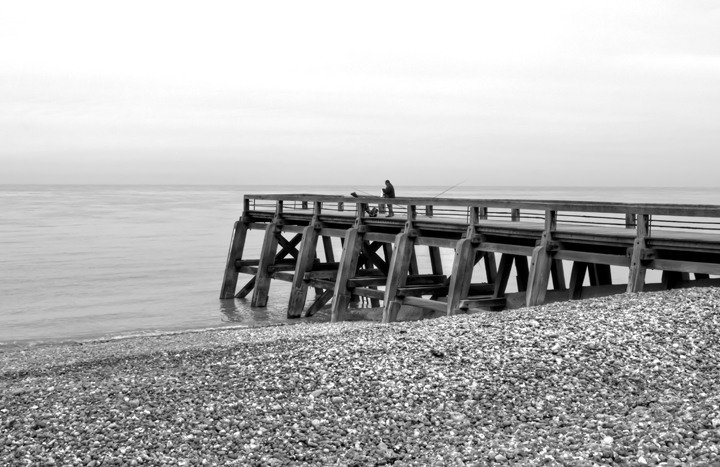 The pier at St Valery-en-Caux

Between Étretat and Fécamp, miniature gorges called valleuses dip down into the sea. They’re hanging valleys, cut off when the sea eroded the cliffs back, which make a good route down onto the pebble beaches. Fécamp is the home of the liquer Bénédictine and you can take a tour of the ornate palace that houses the distillery. The recipe’s a closely-guarded secret using 27 different spices (though I have to admit it reminds me a bit of cough mixture). The legend goes that it is based on a recipe brewed by 16th-century monks discovered by antique collector Alexandre Le Grand in a mysterious notebook. 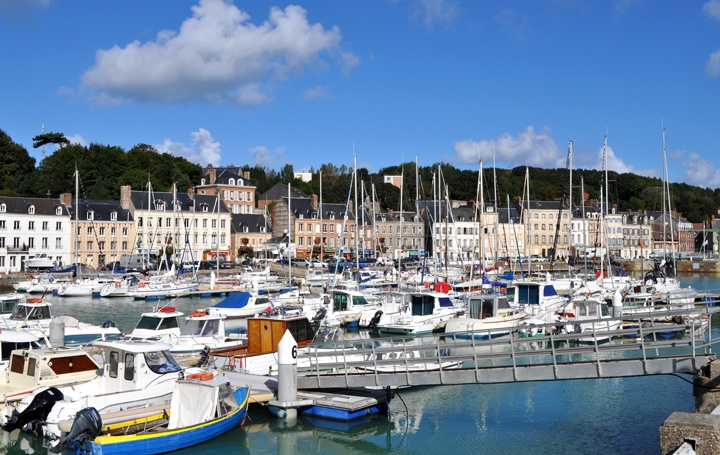 The harbour at St Valery-en-Caux

From Fécamp the coast road leads through a series of seaside towns where you can stop off for a lunch of moules et frites or a drink with a panoramic sea view. It all looks very peaceful now, but there are interesting bits of history all around you. There’s the seafood restaurant in Veules-les-Roses in what used to be Victor Hugo’s house. Or the harbour town of St Valery-en-Caux that looks picture-perfect today but was almost destroyed in the WWII siege that that led up to the British 51st Infantry Division surrendering to Rommel. Normandy’s Alabaster Coast has more than a few stories to tell. 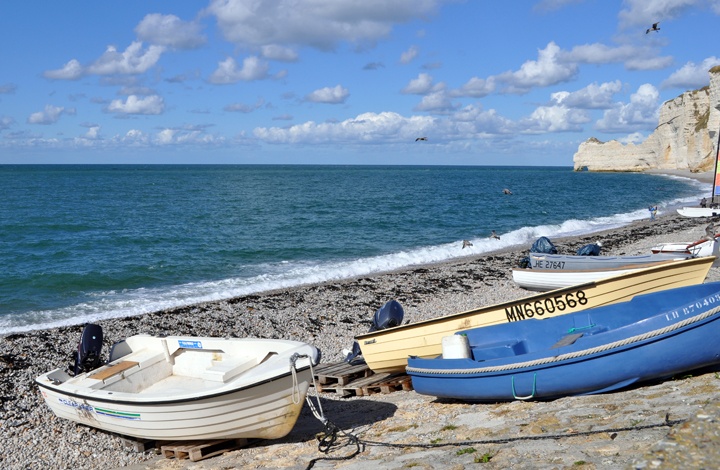 Sailing boats on the beach at Étretat 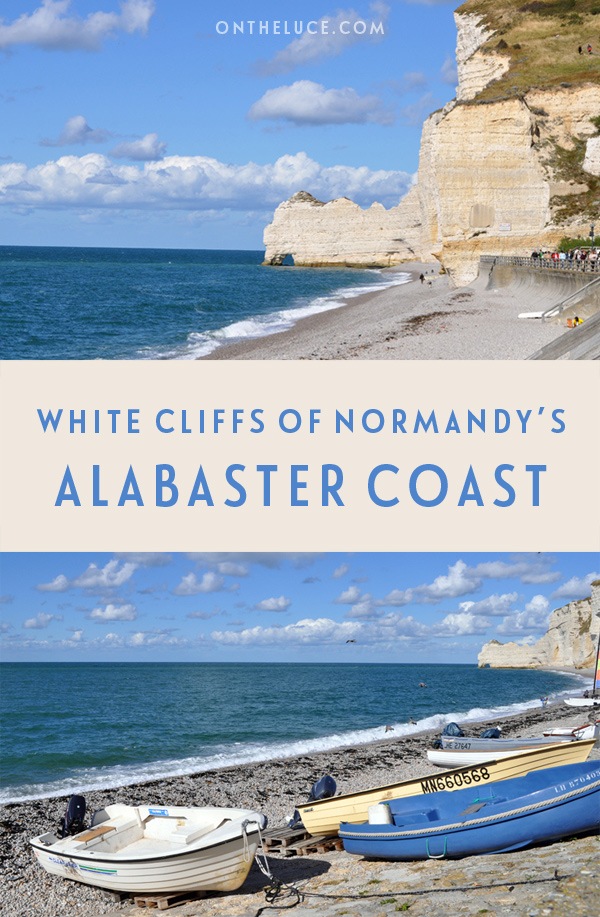 I love the town of Étretat with one very old timbered house that now has a lovely restaurant. The beach is lovely and it is a great place to spend a few days exploring the area.

It's such a lovely area – I'm surprised it isn't better known.

Great set of photos, I would absolutely love to visit these cliffs some day.

Thanks, hope you get to visit soon, its a beautiful part of the world.

Thank you for very a nice Harbors in France.I am sailor from Port Townsend,Washington-USA. Merry Christmas and Happy New Year!

Thanks for visiting – and have a great Christmas and New Year too!

Ah, so that's where you get your love of France, Lucy? It does look nice.

It is indeed! Though after years of going there when I was younger I spent years going anywhere but and am just starting to rediscover this area.

Thanks, it was a lovely part of the world.