The gorgeous mountain scenery, log cabins fringed with icicles and fir trees laden with snow drifts. The feeling of freedom as I finally mastered parallel turns and made it to the bottom of the piste upright. The sense of relief when you get your boots off at the end of the day and are settled in front of a log fire with a mulled wine. I never thought I’d like skiing, but when I finally gave it a try I was an instant convert, and I’ve been back again and again since.

My first ski trip was to Meribel-Mottaret in the French Alps, and I loved it there so much that I’ve been back three times. Mottaret is part of the Three Valleys ski area, but it’s not as well known as its neighbours, and usually gets lumped in with Meribel, so it can be hard to find information about Mottaret itself. So here’s my guide to a ski trip to Meribel-Mottaret, on and off the pistes. 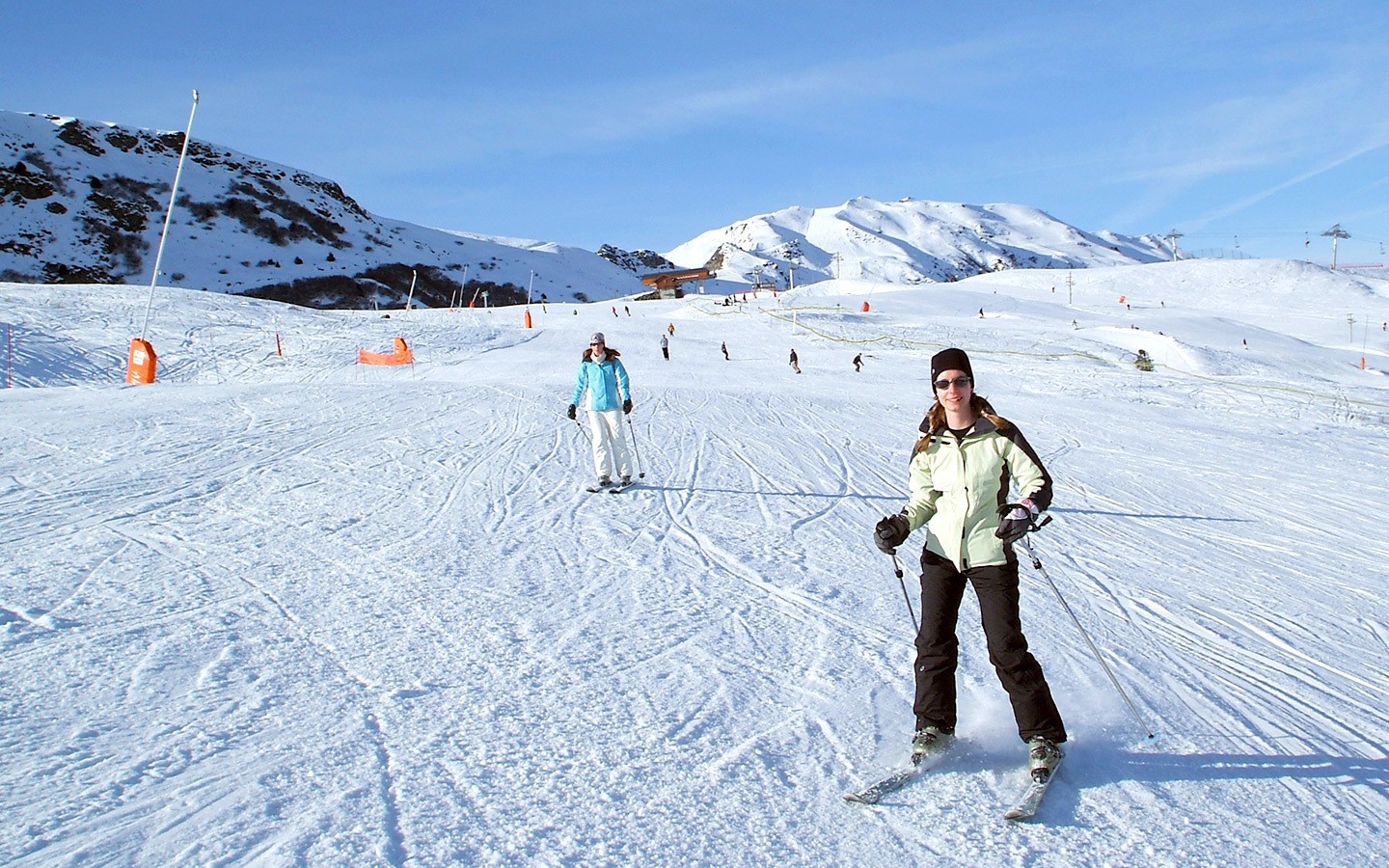 Meribel-Mottaret is located in the French Alps. It’s right in the heart of the huge Three Valleys ski area, one of the largest in the world with over 600km of pistes and eight resorts, including famous names like Courchevel and Val Thorens. But Mottaret itself is more like a village than a mega-resort. It’s connected to more well-known Meribel, but is located 3km further up the mountain and despite being purpose-built it has a quieter, more villagey feel. 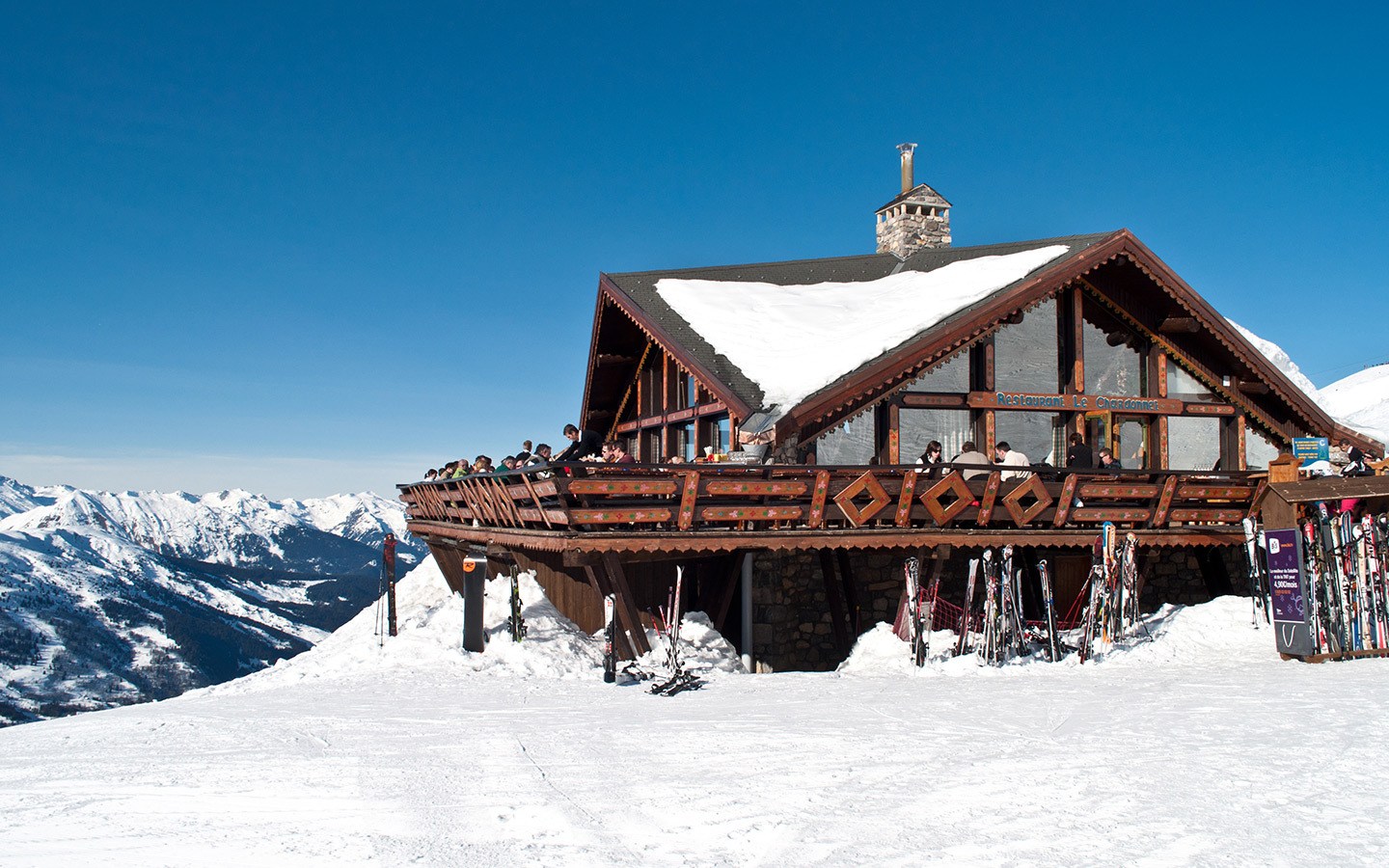 Dining on the piste

At 1750 metres, Meribel-Mottaret is one of the highest resorts in the Alps so you’re almost guaranteed good snow. Mottaret’s ski season normally runs from the first week in December until the last week of April. The Meribel Valley has around 150km of pistes of its own, as well as access to all the other resorts in the Three Valley, so you can choose to buy a pass for lift pass for just the Meribel Valley or the whole Three Valleys, depending on your level. 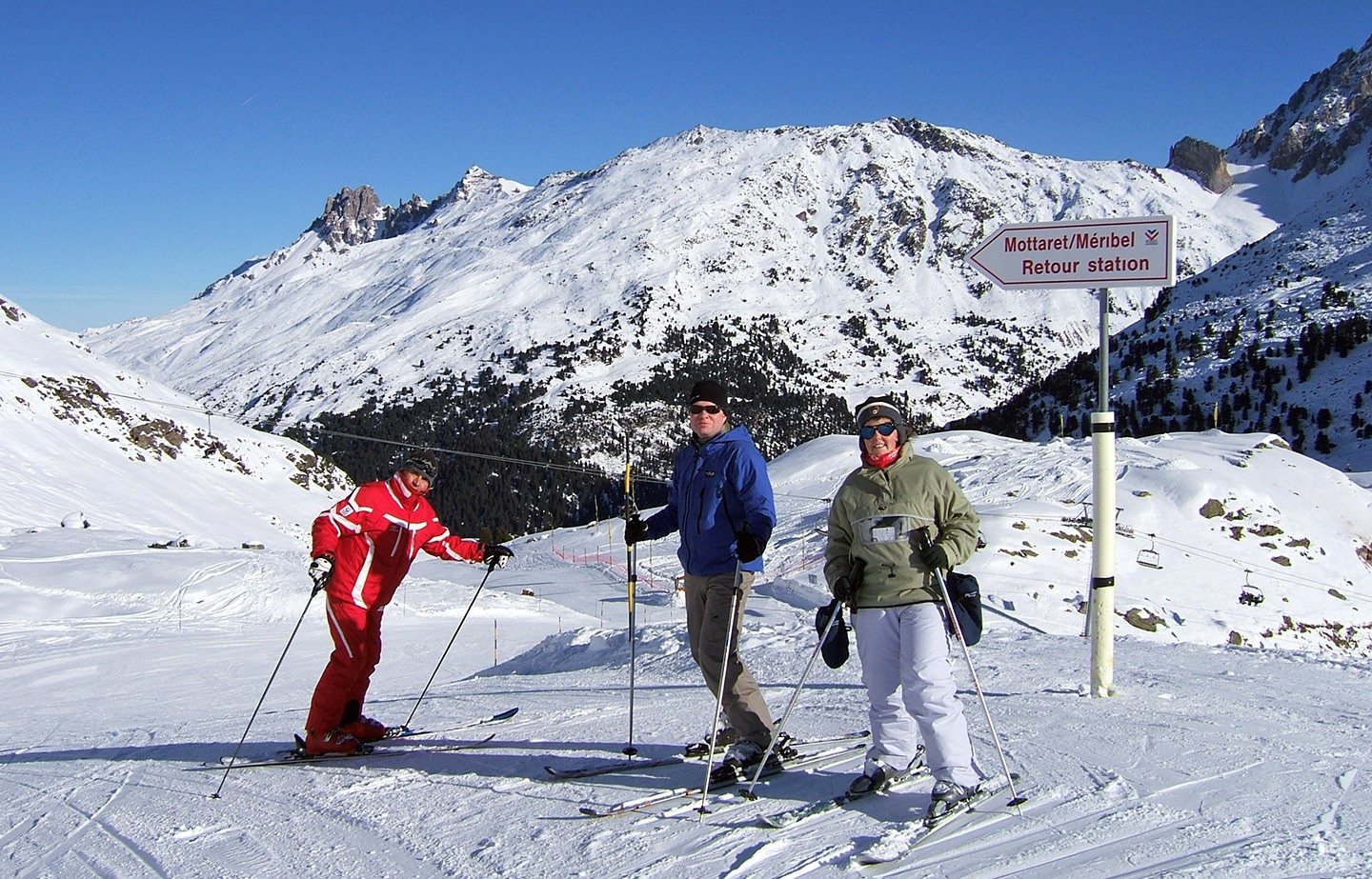 If you’re new to skiing, Mottaret has an ESF ski school with group and individual lessons. Group lessons last 2.5 hours each morning (or afternoons in peak season) and cost €240 for five days for adults. There are a couple of nursery slopes to practice on in Mottaret, but when you’ve got the basics you can head down the green Truite piste to Meribel. A good place to practice is the Altiport area above Meribel (accessed via the Rhodos gondola). It’s a golf course in summer with gentle, wide slopes, and an airstrip at the bottom so you might spot planes landing. 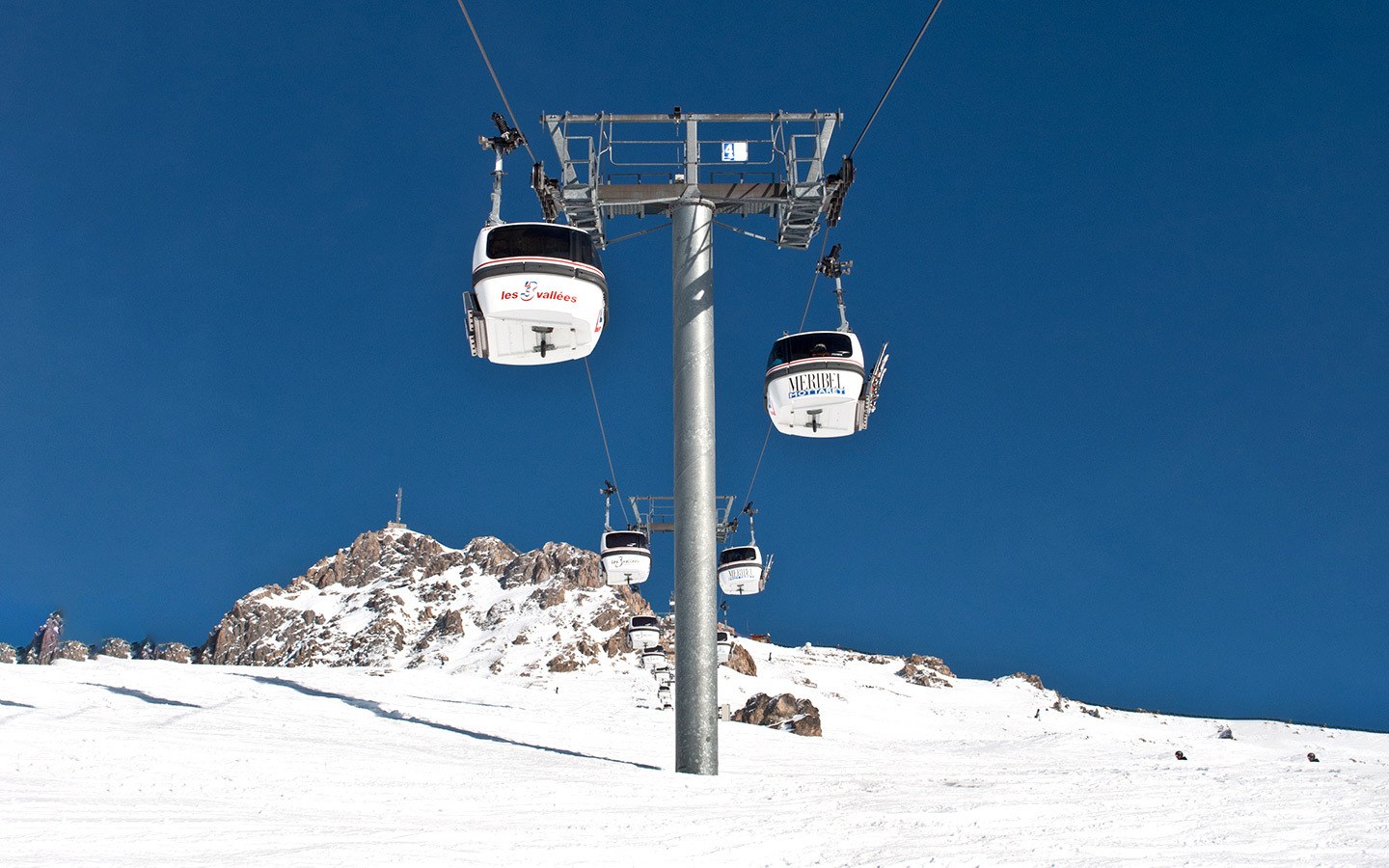 Once you’re feeling confident there are a huge range of pistes to choose from – the Three Valleys is almost 80% blue and red runs. The Plattières gondola from Mottaret leads to a good run of blues back down to the village from its second stop, or go on to the third stop and down the other side of the mountain, following blues and greens to Les Menuires. If you’re more advanced, the Jerusalem piste (access via Meribel’s Tougnette lifts) is rated one of the world’s top ten red runs, and takes you to the traditional Savoyarde village of St-Martin-de-Belleville.

Advanced skiers have the whole of the Three Valleys to choose from. There are a few black runs – including the Face piste which was used as the women’s downhill run for the 1992 Olympics (access via the Olympic lift) and the Couloir Tournier piste, a steep run beneath the Saulire Express lift with a video camera installed so you can watch yourself later. The two red runs from the top of Mont Vallon are long and steep, and often have lots of moguls. This area also has some good off-piste skiing or you can perfect your tricks at the snow park above Mottaret. 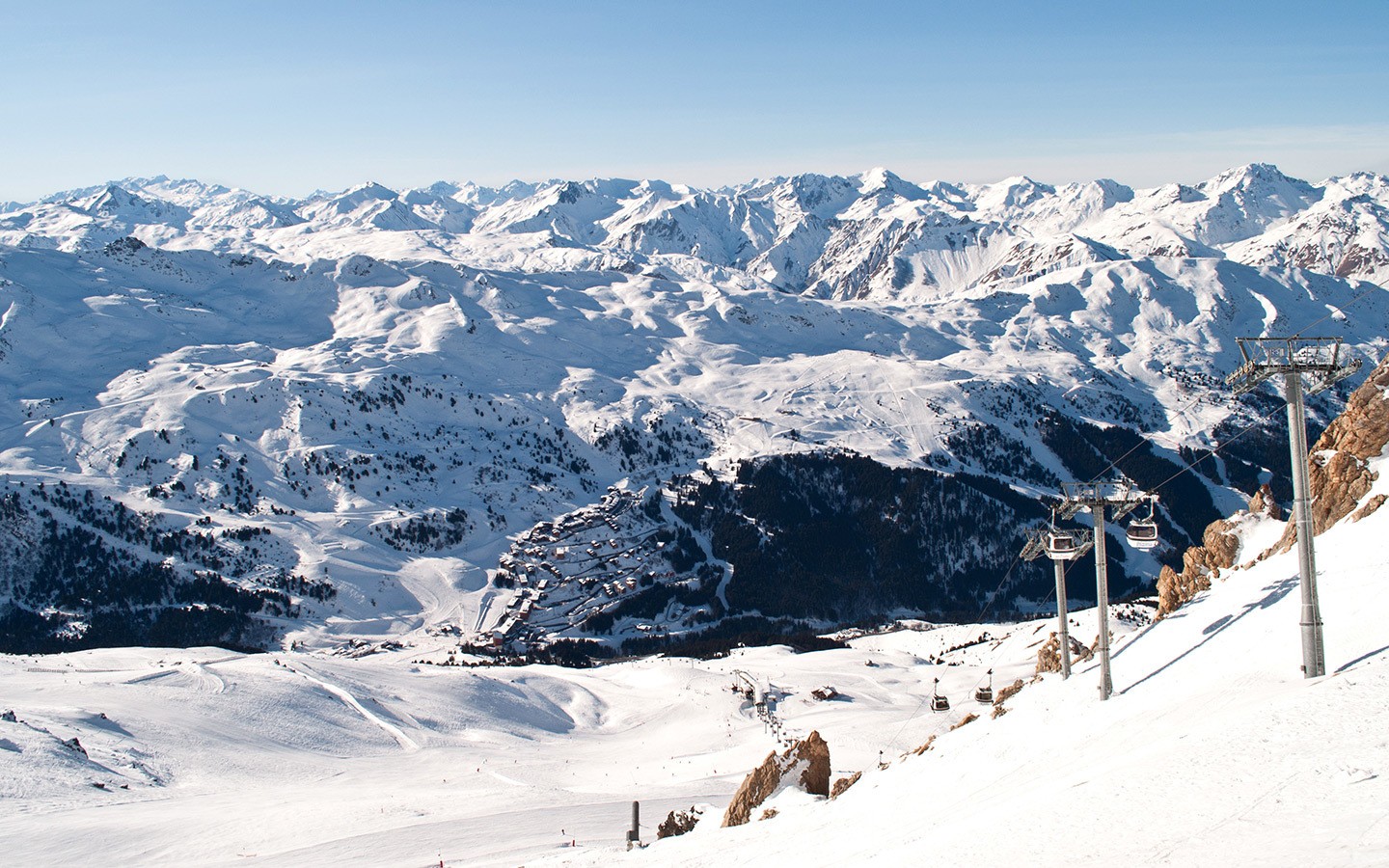 Views from the top of the Saulire lift

Things to do off the slopes

If you don’t want to ski – or need a day off the slopes for your aching muscles to recover – there are plenty of other things to do in Meribel-Mottaret, involving varying levels of exertion. At the far end of the village there’s an undeveloped patch of the mountains that’s been left as a nature reserve – the Plan de la Tuéda. You can walk through the forest and around the lake, an incredibly peaceful route that’s usually almost empty with sound muffled by the snow.

You can head further into the reserve along the cross-country ski tracks, or take a snowshoeing class with lessons in the mountains’ environment and culture as you walk. Or if you fancy speeding down the slopes without skis, you can hire or buy a sledge in Mottaret. For for something more extreme, there’s a night-time sledge run down to Meribel on Tuesday evenings.

It follows the green Truite piste, which feels a lot steeper in the dark. You’re kitted up with crash helmets and glow sticks and followed down by ski instructors to pick up any stragglers. Meribel itself has more things to do, including an ice rink, bowling alley and swimming pool. There’s a walking path between Meribel and Mottaret which takes about half an hour to walk. Or there is a free shuttle bus between the two every 20–35 minutes from 7.30am to 9.30pm. 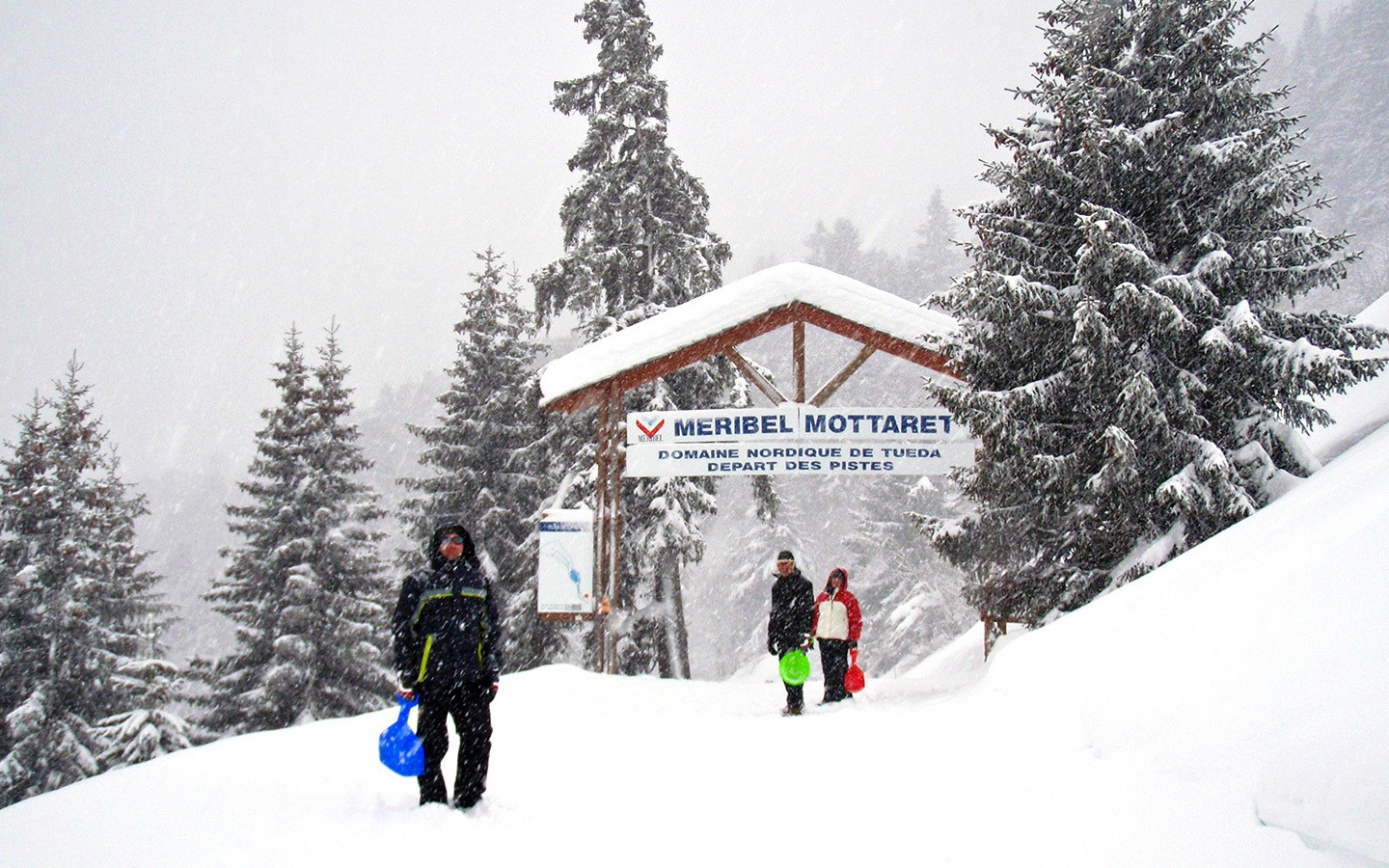 Sledging in the nature reserve

Where to stay in Meribel-Mottaret

Being a fairly small resort, most accommodation in Meribel-Mottaret is either ski-in ski-out or just a few minutes’ walk from the piste. There are a range of hotels, chalets and self-catering apartments. For groups, renting a chalet can be a good option, with breakfast, afternoon tea, dinner and local wine included in the price. Chalet Yankee Lodge sleeps up to 10, with fantastic views down the valley and the Chalets gondola onto the Truite piste only 300 metres away.

If you’re in a smaller group there are lots of ski companies offering rooms in shared chalets. Or another option is a chalet hotel. You still get your meals provided but they tend to be bigger, so you don’t have to worry about being stuck in a confined space with people you don’t know. There are also extra facilities like spas and crèches. Hotel Les Arolles* is a ski-in ski-out hotel with pool, sauna and terrace right on the edge of the Furet piste on the way into Mottaret.

If you’re on a budget, the Les Sentiers De Tueda* self-catering apartments, owned by French Pierre & Vacances holiday chain, are a good option. They’re right in the centre of Mottaret and you can ski to the door. The cheapest option is a studio sleeping four (two sofa beds and bunks) but there are also one-bedroom apartments. The apartments are compact but come with small kitchenettes (with hot plates, microwave, dishwasher and fridge) and balconies. 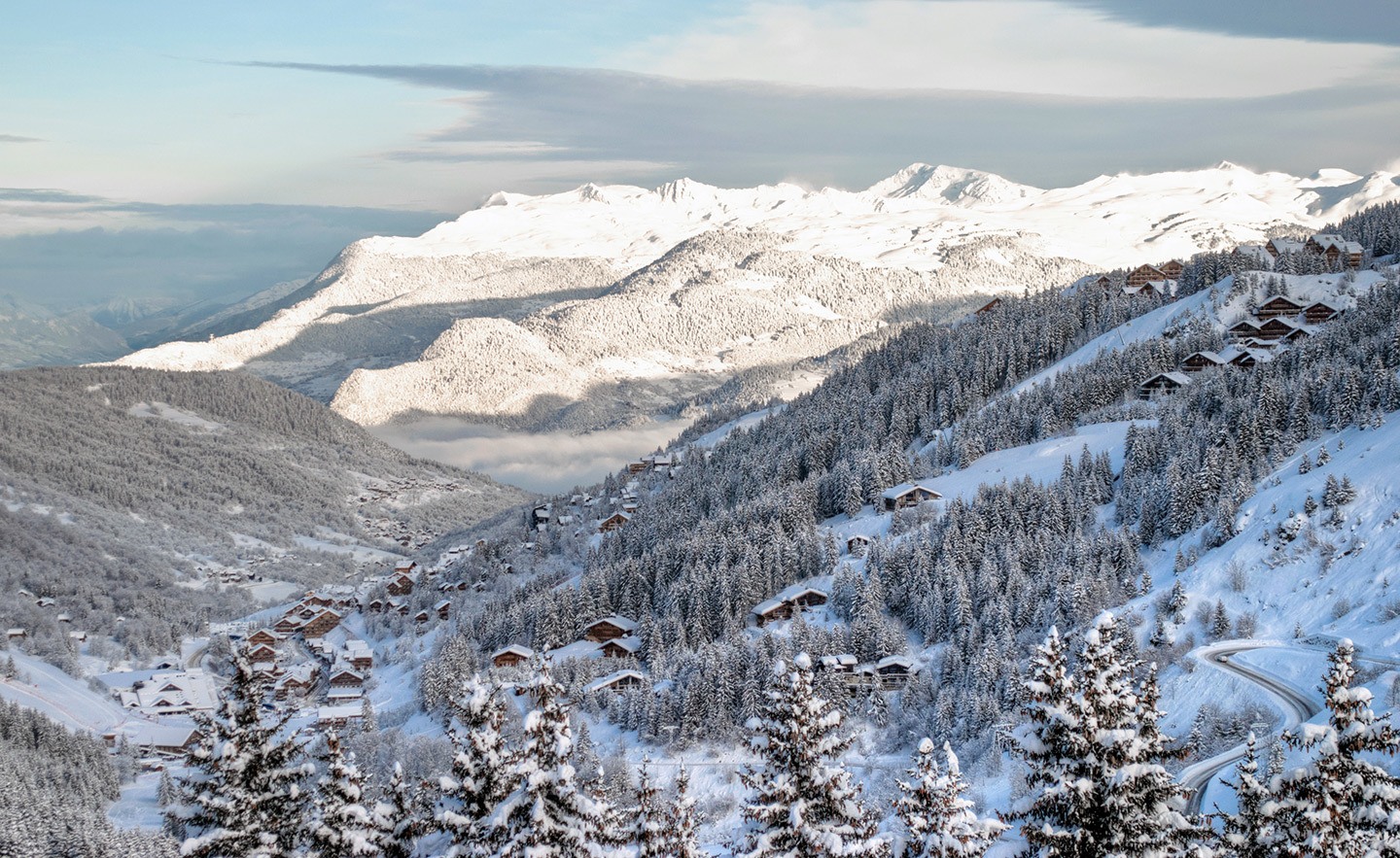 Views from our Mottaret chalet

Eating and drinking in Meribel-Mottaret

Meribel-Mottaret has around about 15 restaurants. Some of my favourite options are the Pizzeria du Mottaret for good-value pizza and pasta dishes, Au Temps Perdu for sweet and savory crèpes, and Restaurant Savoyarde or the compact and cosy Le Zig-Zag for traditional local dishes like fondue and raclette. Mottaret is nowhere near as much of a party resort as Meribel, so if you want a big night out you’re better off heading down the valley.

There are a couple of bars in Mottaret though, like Downtown Bar and Le Rastro, where they have Tuesday night parties (book a table for dinner if you want a prime spot on one for the dancing later!). If you’re self-catering, or want to pick up supplies for a packed lunch, there are a couple of small supermarkets in Mottaret (Sherpa and 8 à Huit). There are picnic spots by a lot of the lift stations; the one at the bottom of Altiport is a sunny, sheltered spot. 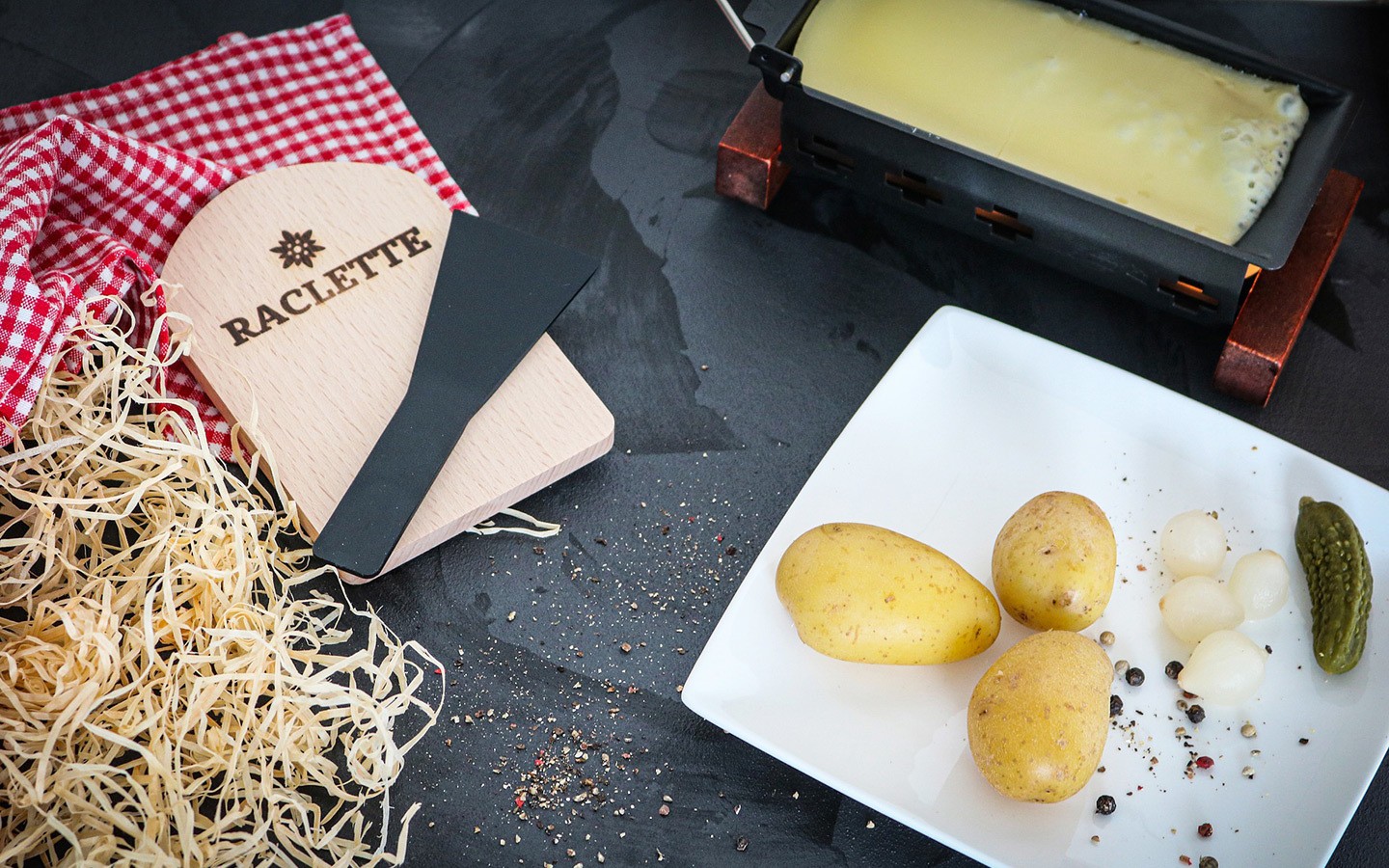 How to get to Meribel-Mottaret

The nearest airport to Meribel-Mottaret is at Chambery (59 miles away), but only a couple of airlines fly there, so you’re usually better off flying into Geneva (83 miles away). From there a shared bus transfer takes 3 hours and costs from £74 per person return.

By train from the UK the easiest route is the Ski Train from London to Moutiers (9 hours 30 mins), but it only runs on on Saturdays from December–April and Fridays from January–April and gets booked up early. Otherwise you can take the Eurostar to Paris (2 hours 20 mins) and either a daytime or overnight train from there to Moutiers, which takes around 4.5 hours. From Moutiers it’s a €13.50 bus or €80 taxi ride up into the mountains, taking 30–45 minutes. 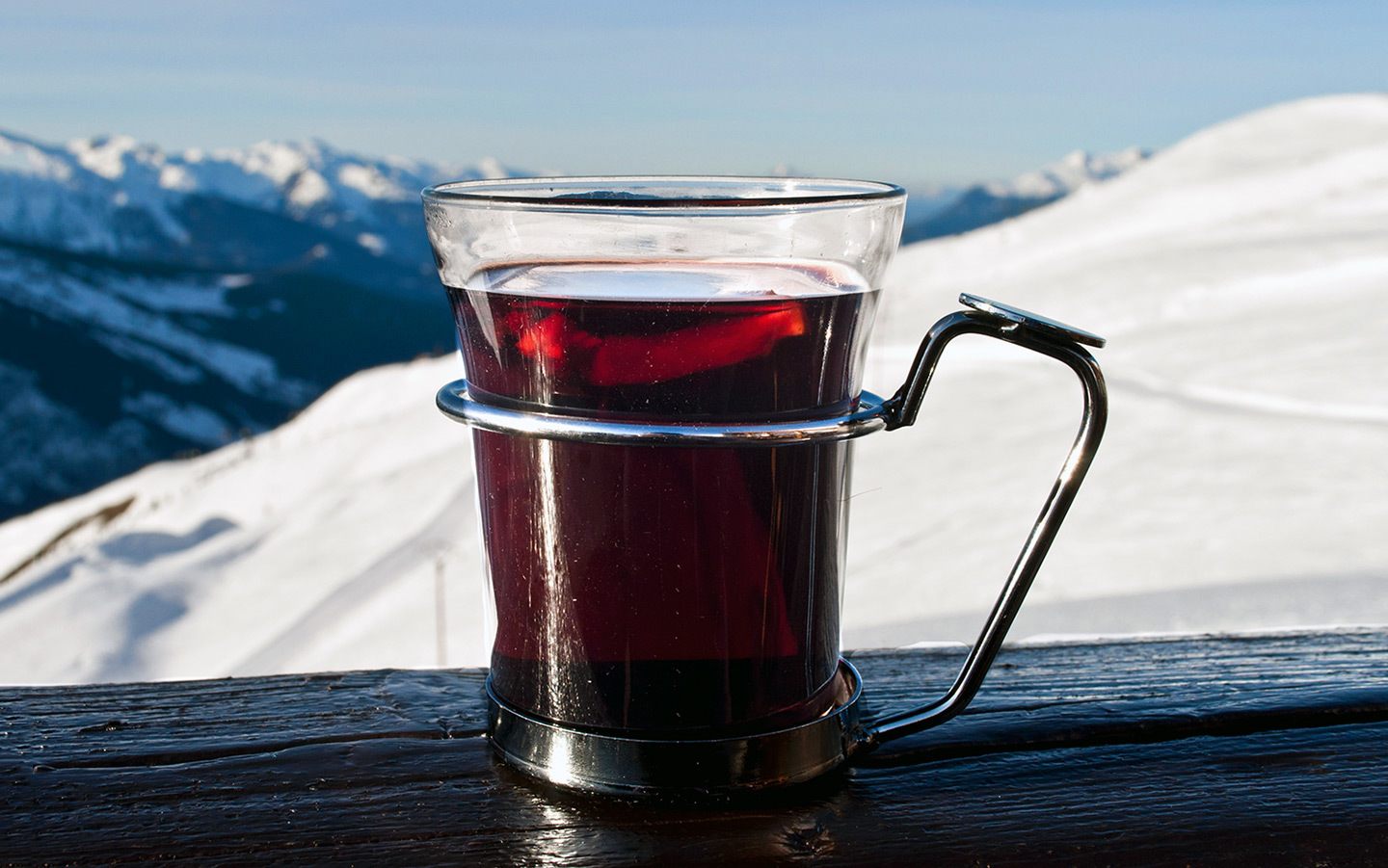 Warming up with a vin chaud 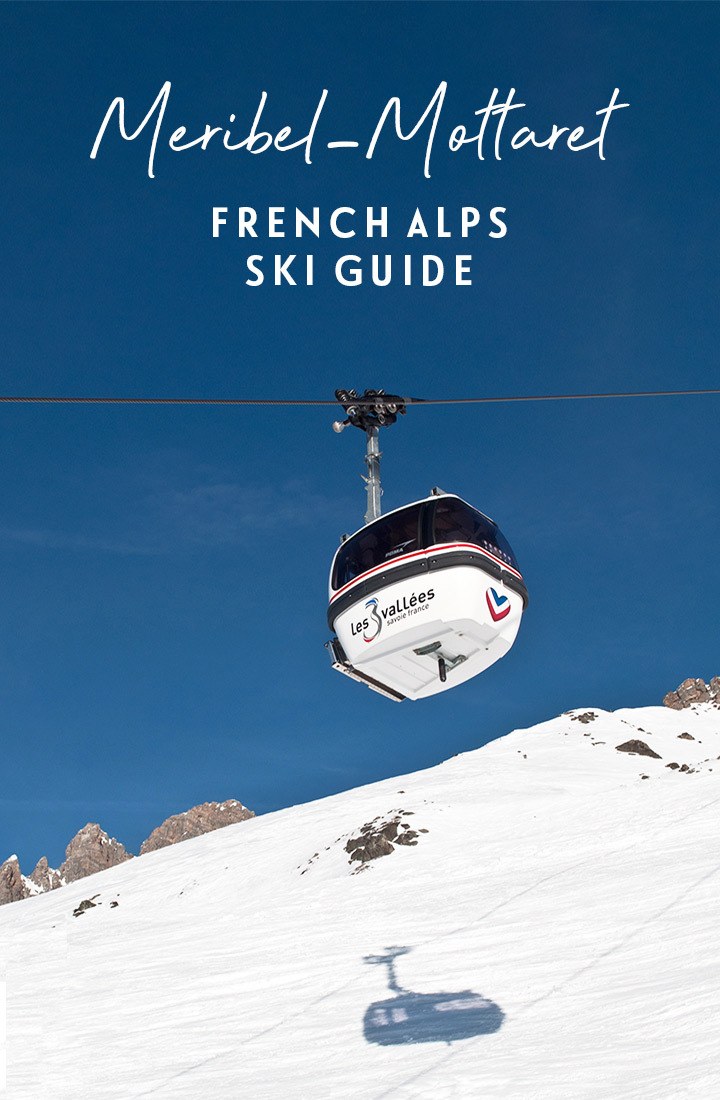 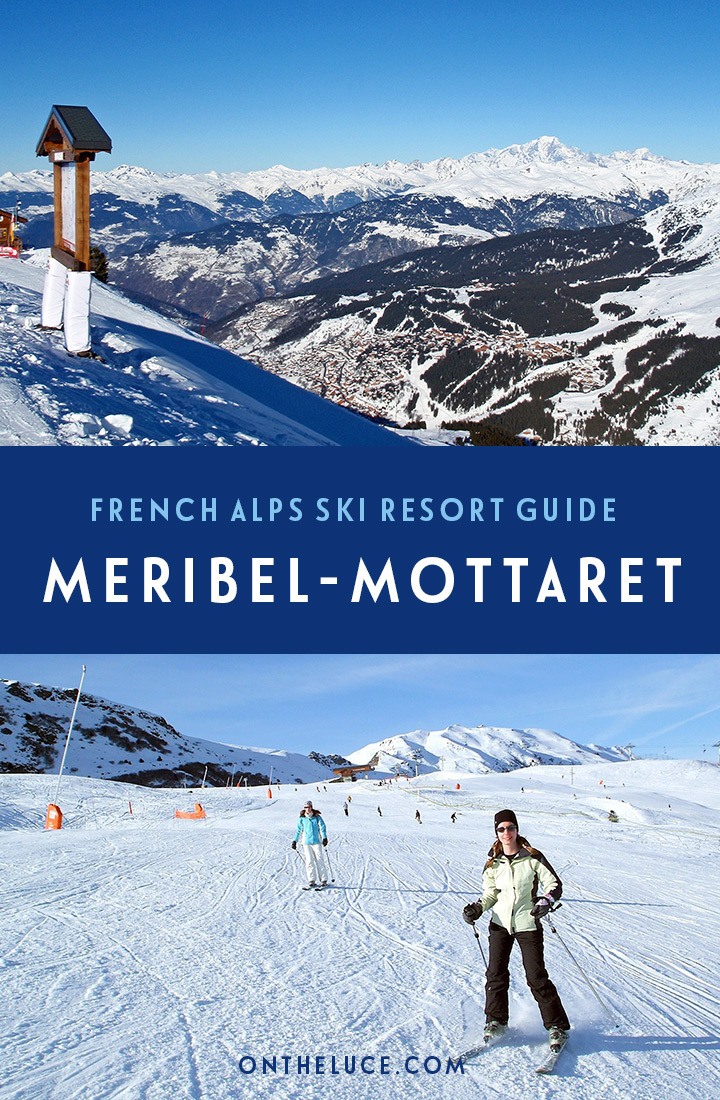 * This article contains affiliate links, where I get a small commission at no extra cost to you, thanks.

Great guide! I really want to check out this ski region now, never having skied there before.

It's a great resort, lots of charm and a really good variety of slopes.

Thanks Lucy for a great post. This is really comprehensive!

I've just spent an amazing week in Mottaret and would highly recommend it to anyone wanting to ski the Three Valleys. As Lucy rightly says, the village is really quiet and has a nice traditional feel to it. Many apartments are ski-in/ski-out; the rest are just a short walk from the slopes. Perfect!

Wherever you want to go in the 3V, Mottaret gives you unbeatable access to it. Up the Pas du Lac and you're into Courchevel. Up the Plattieres and you're into Val Thorens and the Belleville Valley. Or just head down the Truite green run and you're in the heart of Meribel Centre. Amazing.

Thank you – I have such a soft spot for this area as being the place I learned to ski, and I was definitely spoilt with the easy ski in ski out.

I must confess that I m not very fond of skying. But with your blog and your pictures, who knows?

The beautiful scenery and great food and drink definitely makes the trip for me, so you don't necessarily need to do the skiing!

I also used to hate winter and being cold - until I learned to snow board. Now I look forward to winter (I still look forward to summer just a little bit more though). Thanks for sharing!

I do love winter trips and the snow but think I'm with you on looking forward to summer even more!

This blog is excellent! I've just moved to the UK and am loving all these excellent and relevant tips! Thank you!

Thanks, and I hope you enjoy your time in the UK – so much to see here and in Europe it should keep you busy for a good while!