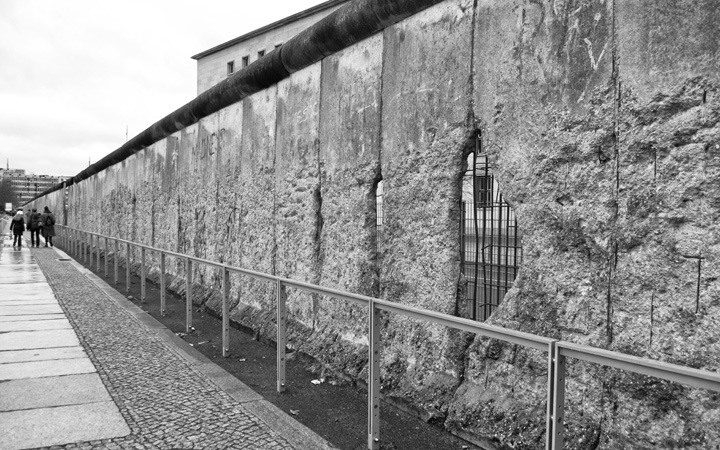 It’s hard to talk about Berlin without mentioning the wall. It’s shocking to think that just a quarter of a century ago one of Europe’s major cities was split in two and Berliners were separated from friends and neighbours for 28 years. The wall was the most visible symbol of the Cold War and the division between Western Europe and the Eastern Bloc. But today you can hardly tell where it was in some places – the pace of construction means the two sides have knit together perfectly. It still has a huge impact on the city though, not least as it’s so recent. Every Berliner over 40 will have memories and stories about how the wall affected their lives. After seeing so many ancient historical sites it’s strange to visit somewhere that has this first-hand history available. And there are plenty of places in the city where you can access it.

Exhibits at the Berlin Wall Memorial

At the end of WWII, Berlin was divided up between the countries who helped liberate it – America, France and Britain got the West and the USSR got the East. For 15 years West Berlin was a capitalist enclave behind the Iron Curtain. People could move freely, but the attractions of the West meant that the East lost millions of its people across the border and by 1960 it was on the verge of collapse. So on the night of 13 August 1961, East German soldiers rolled out miles of barbed wire to create what they called the ‘Anti-Fascist Protection Barrier’. Berliners woke up the next morning to find their city had been torn apart. It wasn’t actually cut in half, but rather the wall surrounded West Berlin, so it was like an island within East Germany. People were trapped, families were split up and relationships were destroyed. 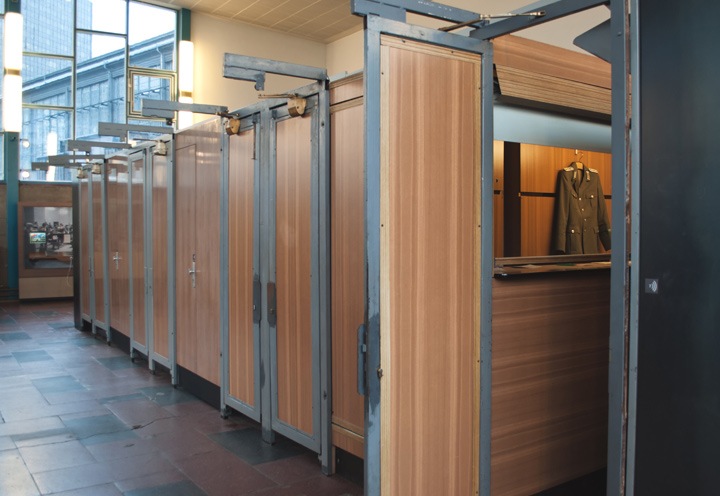 Immigration booths at the Berlin’s Tränenpalast or Palace of Tears

The wall stretched for 155km and over the years it changed from a barbed wire fence to a concrete wall 12 feet tall and 4 feet wide, and finally ended up as two separate walls surrounding a ‘death strip’ of trenches, electric fences, watchtowers, armed guards and attack dogs to stop people escaping. 136 people died trying to cross the wall, right from a few days after it was put up when a teenage boy trying to get to the West was shot and left to bleed to death on the wire by East German guards. People did still get out though, using all sorts of ingenious methods like building a hot air balloon and a zip wire. By the end of 1963 West Berliners were allowed to visit their friends and family in the East, but there were a lot of restrictions and if you lived in the East you would still be cut off for another 25 years. 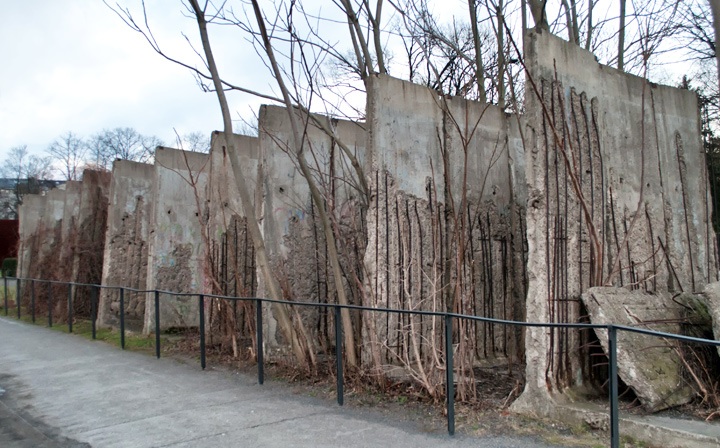 Preserved sections of the wall at the Berlin Wall Memorial

Then on 9 November 1989 suddenly it was all over. East Germany was losing its population again as Hungary had opened its border so people travelled across Europe to get to the West. So in a surprise announcement Berliners were told the borders had been opened. There were parades and parties across the city as people celebrated and sections of the much-hated wall were torn down. After the wall fell, a lot of it was divided up – it’s on display everywhere from London’s Imperial War Museum to the men’s toilets in a Las Vegas casino. A double row of cobbled stones runs through Berlin’s streets to show where the wall stood, and there’s still around 2km of the wall still standing in the city. Most has been preserved as a memorial, to make sure people don’t forget, with exhibits to show visitors how it affected people’s lives. 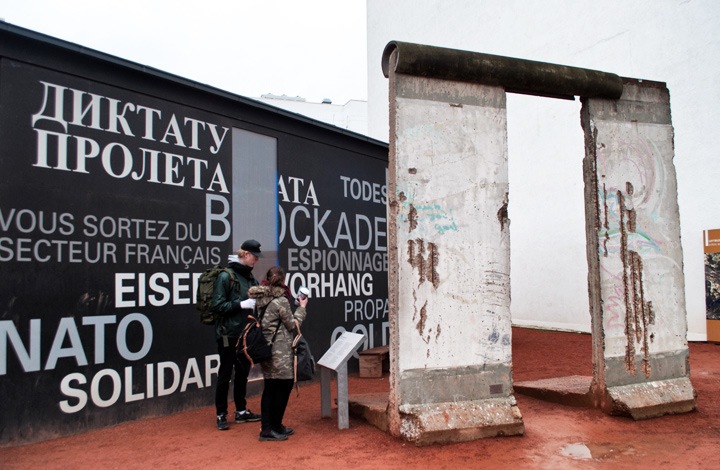 A section of the wall on display near Checkpoint Charlie

The Berlin Wall Memorial on Bernauer Strasse is a great starting point for following the story of the wall. What was once a stretch of the death strip is now a memorial parkland, with open-air exhibits and lines of steel poles along the route of the wall route that look like prison bars. A section of the original death strip has been preserved, and it’s the only place you can see it just as it would’ve looked in 1989. From an observation tower in the museum building you get a bird’s eye view down into the death strip, an imposing sight surrounded by high concrete walls each side and a watchtower above. You would’ve been so exposed trying to escape – it shows how desperate people were though that it didn’t stop them trying. There’s an attached documentation centre with a lot of information about the wall and the area, which was where the first official demolition took place in 1990 after the borders were opened. 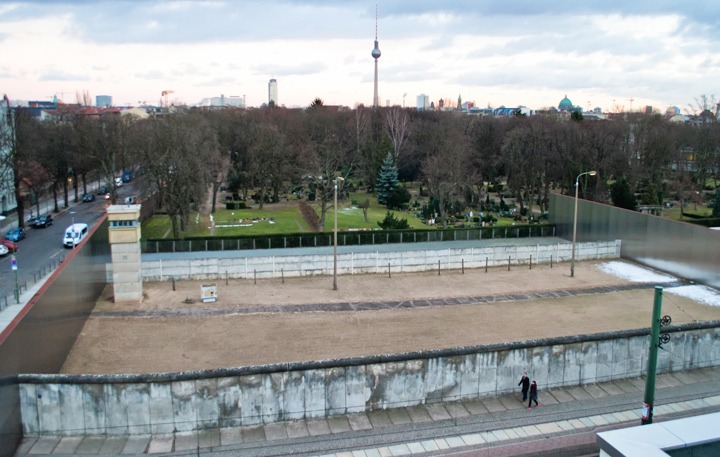 Preserved section of the Death Strip on Bernauer Strasse

The East Side Gallery

Along the banks of the River Spree is the longest remaining and most colourful stretch of the wall – the East Side Gallery. It runs for 1.3km and has been converted into an open-air art gallery, with over 100 murals painted by international artists. They were painted back in 1990 and show the euphoria Berliners were feeling after the wall came down, with a colourful and creative mixture of political satire, symbols of peace and anti-oppression messages. Over the years since they’ve been damaged by graffiti and vandalism, but are slowly being restored. The biggest threat now though is the redevelopment of the area which has already meant a couple of sections have had to be knocked down or moved. 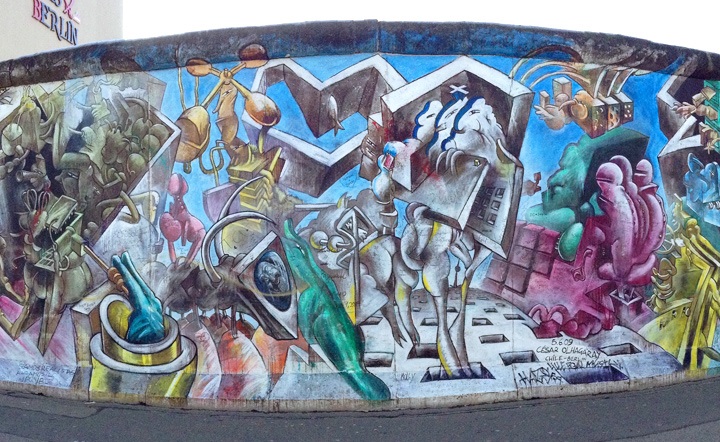 Painted murals at the East Side Gallery

The Palace of Tears (Tränenpalast)

One of the less famous memorials was the one I found most moving – the Tränenpalast or Palace of Tears. It’s not a section of the wall but rather one of the last remaining border crossing stations at Friedrichstraße station. It was the main checkpoint for people travelling from East to West Berlin and got its nickname from all the heartbreaking goodbyes that took place as West Berliners left their families and friends in the East behind. The original immigration booths are still there, where people had their passports scrutinised, and they cleverly use suitcases to show people’s stories. There’s the family separated when their father stayed to work in the West, there’s the lovers trying to keep relationships going across the wall. It’s the human stories that really bring the impact of the wall to life, and what should always be remembered. 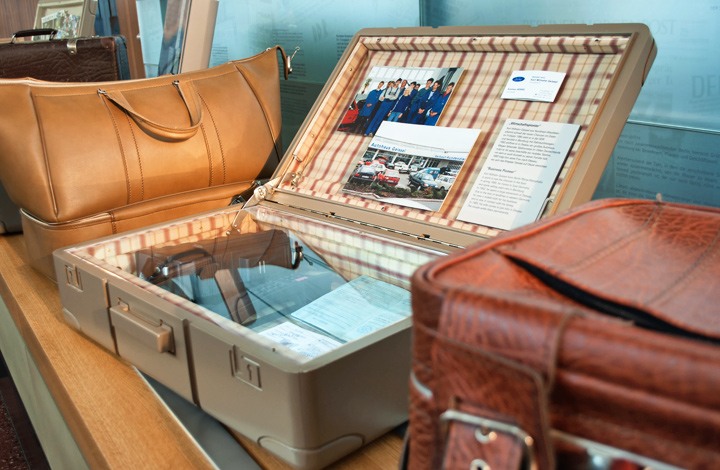 Suitcase stories at the Palace of Tears 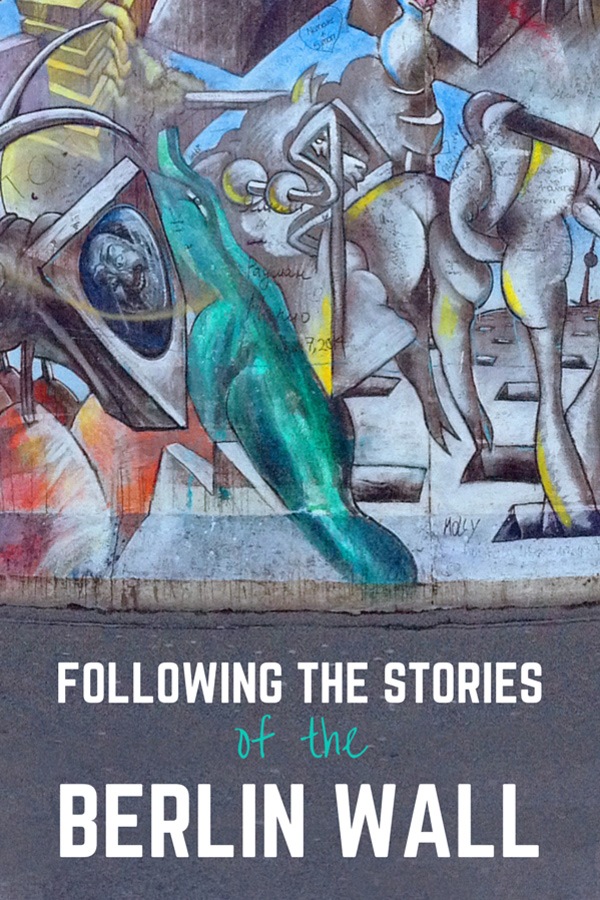 Really fascinating. It may look like a mere wall. But since it is coated with so many stories and emotions, it becomes special and it marks a very important part of Berlin history.

Yes it's such an important part of the city's history and there are so many personal stories relating to it – so glad they have preserved some sections so we can experience it for ourselves.

Lucy this was such an interesting post! I think as a child I understood vaguely what was happening in Berlin but it's still bizarre to hear about now. You can't imagine a city being divided like that, and for it to have only happened 20-odd years ago. Would love to visit Berlin, I keep hearing such great things about it.

Thanks Maddie, yes it really brought all those historical facts to life actually being there. I remember growing up with the stories too but all the little human details were really moving.

What a fascinating post, Lucy! I've never been able to decide if I fancied Berlin or not but it has a growing army of fans. Aren't we humans strange creatures that we can do this to each other? Thanks for sharing. :)

Thanks Jo, yes it does seem to be a place that has a lot of fans. If you're interested in history it is really interesting to be where all these recent events happened.

Interesting post. I hope to visit this historical place one day. :)

Thanks, it's a fascinating place and well worth a visit sometime.

I can't believe this all happened such a short while ago - quite shocking. Looking forward to your Berlin posts as I've never been. Yet... :)

It is so shocking that these things were going on within out lifetime. Berlin's a fascinating city, hope my posts will tempt you out there!